Anemia is a common clinical symptom of decreased peripheral blood red blood cell volume below the lower limit of the normal range (1), and is the most common nutritional problem throughout pregnancy. Anemia has been reported in about 50% of women during pregnancy (2,3). Studies have confirmed that anemia during pregnancy may lead to fetal hypoxia, and may also cause degenerative changes in the villi in the placenta, resulting in insufficient blood supply to the placenta, in turn causing fetal intrauterine asphyxia. In severe cases, premature birth and stillbirth may result (4,5). The fetal endocardium is the most sensitive to hypoxia, so assessing changes in fetal cardiac function can reflect fetal development in utero.

Fetal heart quantification (fetal HQ) technology (6) is a new technology based on a two-dimensional speckle tracking imaging technology that divides the fetal ventricle into 24 segments (7). Fetal HQ is used to quantitatively analyze and evaluate fetal heart morphology and function. The purpose of this study was to investigate the application value of fetal HQ technique in the fetal cardiac size, morphology, and contractility of non-anemic and anemic pregnant women. We present the following article in accordance with the MDAR reporting checklist (available at https://tp.amegroups.com/article/view/10.21037/tp-22-315/rc).

A total of 77 normal pregnant women [gestational age (GA) 26.6±3.6 w] and 40 anemic pregnant women (GA 26.2±4.9 w) in their second and third trimesters were selected from the Ningxia Maternal and Child Health Hospital (Ningxia Children’s Hospital) and General Hospital of Ningxia Medical University from November 2021 to March 2022. Average age of all pregnant women is 30.03±0.85 y. The eligibility criteria were as follows: pregnant women with anemia: maternal peripheral blood hemoglobin (Hb) <110 g/L (8); single pregnancy; no other pregnancy complications or other diseases; fetus had no cardiac malformations and malformations of other systems; and no chromosomal abnormalities in the fetus. A normal pregnant woman was defined as a pregnant woman without complications during pregnancy and other inclusion conditions were consistent with the case group. Women in both groups had an accurate date of their last menstrual period (LMP), and the GA assessed by ultrasound was consistent with the GA calculated from the LMP history. All women were informed of the accuracy and limitations of fetal echocardiography before examination, and provided informed consent for fetal echocardiography. The study was conducted in accordance with the Declaration of Helsinki (as revised in 2013). This study was approved by the Ethics Committee of General Hospital of Ningxia Medical University (batch number: [2020]0520B), and the Ethics Committee of the Ningxia Maternal and Child Health Hospital (Ningxia Children’s Hospital) (batch number: KJ-LL-2022-26). Informed consent was taken from all the participants for this study.

General clinical data collection of pregnant women was conducted: maternal age, LMP, past medical history, gestational weeks, and so on. The woman was instructed to lie in a supine position. First, a routine two-dimensional ultrasound examination was performed to measure the fetal head circumference, biparietal diameter, abdominal circumference, humerus length, and femur length, and to determine the GA and weight of the fetus. Fetal echocardiography was then performed, followed by quantitative cardiac analysis using fetal HQ software.

The operator was instructed to adjust the conditions of the ultrasound instrument, reduce the fan angle of image acquisition or increase the frequency of the probe, increase the frame rate of image acquisition, optimize the image quality, clearly display the boundary between the ventricular cavity and the endocardium, and keep a dynamic map of no less than 3 seconds. They also attempted to exclude the influence of the women’s breathing and fetal movement.

On the fetal apical four-chamber view (4CV), the frame before the closure of the atrioventricular valve was determined as end-diastole, and the basal‐apical length (BAL) and transverse width (TW) of the four-chamber heart were measured on this view. BAL is the distance from the posterior base of the heart to the apical epicardium, TW is the distance between the epicardium of the largest TW of the heart; The software automatically calculated the area of the heart (A) and the global sphericity index (GSI=BAL/TW) (Figure 1). An end-systolic phase was then determined between the two end-diastolic phases of the ventricle in combination with the M-type curve (Figure 2). The systolic and diastolic ventricular endocardium curves of the left and right ventricles were traced, and the left and right ventricular end-systolic and end-diastolic phases were respectively divided into 24 segments. The software obtained the left and right ventricle area (LV/RV-A), the fraction area change (FAC), the global longitudinal strain (GLS), and the spherical index (SI) and fractional shortening (FS) of 24 segment. The Z score were used to analyze the whole fetal heart and cardiac function. In this study, Z-scores >2 or <−2 were considered abnormal. 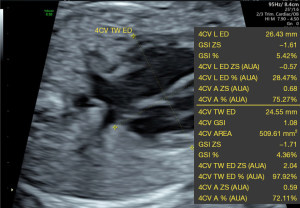 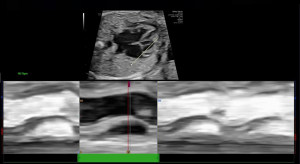 Figure 2 Determining an end-systolic phase between two end-diastolic phases of the ventricle combined with the M-curve. The arrow means right ventricular sidewall apex to bottom.

A total of 20 fetuses were randomly selected and analyzed by fetal HQ after two weeks. Statistical analysis was performed on the two groups of data measured by the same examiner to evaluate the measurement consistency within the examiner.

The software SPSS 26.0 (IBM Corp., Armonk, NY, USA) was used for statistical analysis; the measurement data with normal distribution and homogeneous variance were expressed as ; and two independent samples t-test was used for comparison between groups. The chi-square test was used to compare the abnormal rate of Z values. The repeatability test used the intraclass correlation coefficient (ICC) value to judge consistency. A P value <0.05 was considered statistically significant. 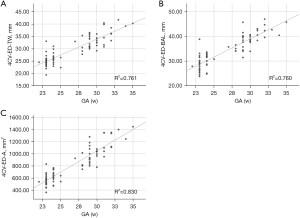 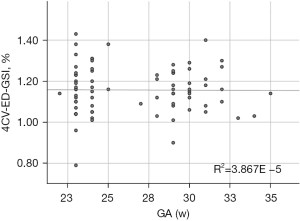 The intra-measurer ICC of each fetal measurement value was 0.82–0.85, with good consistency.

The results of this study show that the quantitative analysis of fetal heart function has high accuracy, which is consistent with the results of previous studies (10-12). The intra-observer consistency was high, so the fetal heart morphology and cardiac function measurements measured by the quantitative fetal heart analysis technique have high repeatability. The most important aspect of using this technique is the acquisition of high-quality dynamic images of the four-chamber heart. The acquisition of the four-chamber cardiac dynamic image used in this study was acquired by a senior sonographer, and the acquired image was not less than 3 seconds. By reducing the fan angle or increasing the frequency, the frame rate of the acquired image was increased, and a high-quality four-chamber dynamic images was obtained, which enabled the endocardium, ventricle, and epicardium have a higher contrast, thereby improving the accuracy of this technique for endocardial tracking. The Z-score scoring system is a standardized tool, which has been reported in many studies in various aspects of fetal heart research (13,14). The critical value used in these studies was generally ±2, so Z-scores >2 or <−2 were considered abnormal in this study.

Heart area is a variable that reflects the size of the heart; according to the International Society of Ultrasound in Obstetrics and Gynecology (ISUOG) (15): “A normal heart usually does not exceed one third of the area of the thoracic cavity”. However, these guidelines do not provide a standard for evaluating the fetal heart when it is larger than one-third of the thorax. The American Heart Association (AHA) statement recommends only measuring the apical diameter of the ventricle at end-diastole to assess ventricular size (16). The fetal HQ technology provides a simple double-diameter method to obtain the area of the heart, so that the changes in the size of the fetal heart can be more intuitively and quantitatively analyzed. The results of this study showed that fetal heart BAL, TW, A, and GA were positively linearly correlated; there was no significant difference in fetal GA between the two groups; and there was no significant difference in fetal BAL, TW, A, and Z values between the two groups (P>0.05). The obtained results indicated that maternal anemia had no significant effect on fetal heart size.

This study confirms that quantitative fetal heart analysis technology can quickly and simply quantitatively assess the size, shape, and contractility of the fetal heart. It displayed a high inter-examiner consistency, confirming the good reproducibility of this technique. This study shows that maternal anemia has no significant effect on fetal heart size and systolic function, but only has a mild effect on morphology, manifested as abnormal SI in the whole and some segments of the left ventricle. This may have been because most of the pregnant women collected in this study had mild anemia and could still meet the normal development of the fetus in utero, so their fetal heart function did not change significantly. In the later stage, it is necessary to increase the sample size and collect samples of moderate and severe maternal anemia to analyze the impact of different degrees of anemia on fetal cardiac function.

Reporting Checklist: The authors have completed the MDAR reporting checklist. Available at https://tp.amegroups.com/article/view/10.21037/tp-22-315/rc

Conflicts of Interest: All authors have completed the ICMJE uniform disclosure form (available at https://tp.amegroups.com/article/view/10.21037/tp-22-315/coif). The authors have no conflicts of interest to declare.

Ethical Statement: The authors are accountable for all aspects of the work in ensuring that questions related to the accuracy or integrity of any part of the work are appropriately investigated and resolved.The study was conducted in accordance with the Declaration of Helsinki (as revised in 2013). This study was approved by the Ethics Committee of General Hospital of Ningxia Medical University (batch number: [2020]0520B), and the Ethics Committee of the Ningxia Maternal and Child Health Hospital (Ningxia Children’s Hospital) (batch number: KJ-LL-2022-26). Informed consent was taken from all the participants for this study.