Acute lymphoblastic leukemia (ALL) is a relatively common clinical malignant disease of the hematopoietic system with an abnormal clone of bone marrow lymphoid group cells. The abnormal proliferation of diseased lymphocytes is not functional, and the infiltration of malignant cells inhibits the normal hematopoietic function of the bone marrow, which in turn produces the corresponding symptoms (1-4). Although ALL can occur at any age, it is more prevalent in children and adolescents, and has become an important issue affecting the health of our nation. Clinical studies have shown (5-8) that ALL is a highly heterogeneous disease with diverse clinical and biological features and a variable prognosis for children. Therefore, identifying the causative factors and prognostic risk factors for ALL has become an urgent challenge. However, until now, the pathogenesis of ALL has remained unclear and it is commonly believed that ALL may be a lesion associated with several factors such as the environment, opportunistic infections, and genetics. Epstein-Barr virus (EBV) is a human herpesvirus type 4 and is commonly found in all age groups, including children and adolescents. Infection with EBV occurs in approximately 90% of the population, but people with EBV infection usually do not show significant clinical symptoms. Nevertheless, a large body of research evidence (9,10) shows that EBV infection can involve organs throughout the body and is associated with a variety of diseases, such as diffuse large B-cell lymphoma, Hodgkin’s lymphoma, and leukemia. Such involvements are due to the ability of EBV to persist in a quiescent state in memory B cells, leading to latent infection, which can cause abnormal immune function through a variety of mechanisms, thus contributing to the development of a variety of malignancies. It has been reported that EBV infection is associated with a high incidence of childhood leukemia, poorer overall survival rate and shorter survival (11). In recent years, the relationship between EBV infection and the development of leukemia has gradually become the focus of research in China and worldwide, but there is little research on the association between EBV infection and childhood ALL. In this study, the impact of EBV infection on the clinical features and prognosis of childhood ALL was analyzed to clarify its relationship, to provide new ideas for the prognostic assessment of children with ALL. We present the following article in accordance with the STARD reporting checklist (available at https://tp.amegroups.com/article/view/10.21037/tp-22-146/rc).

A retrospective consecutive selection of 162 children with ALL admitted to Heilongjiang Provincial Hospital from January 2018 to December 2020. EBV testing was performed on all children after enrollment, and the children were divided into the 2 groups of infected and non-infected according to whether they were EBV infected. The 2 groups were comparable in terms of general information (P>0.05).

The exclusion criteria were as follows: myelodysplastic syndrome transformed leukemia, mixed phenotype leukemia, immunodeficiency disorders, those who relinquished treatment despite a clear clinical diagnosis of ALL.

The study was conducted in accordance with the Declaration of Helsinki (as revised in 2013). The study was approved by the Ethics Committee of Heilongjiang Provincial Hospital (No. 2021-01419) and informed consent was taken from all the patients’ guardians.

Data were analyzed using the software SPSS 22.0 (IBM Corp., Armonk, NY, USA). Kolmogorov-Smirnov was used to test whether the data conformed to a normal distribution. Normally distributed measurement data were expressed as () and independent samples t-tests were used for comparison between 2 groups. Measurements that did not conform to a normal distribution and comparisons between the 2 groups were made using the Mann-Whitney test. Statistical data were expressed as n (%), the χ2 test was applied for comparison between groups, and the Ridit test for rank data. Logistic regression analysis of factors associated with EBV infection with an odds ratio (OR) >1 suggested that the factor was associated with EBV infection. Survival curve analysis was performed using the Kaplan-Meier method; risk ratio (HR) and 95% confidence interval were performed using Cox regression. Receiver operating characteristic (ROC) curves were used to analyze the predictive value of EBV infection on the prognosis of children with ALL. A P value <0.05 indicated statistical significance. All statistics were tested using a 2-sided test with a test level of α=0.05.

Comparison of clinical features between the 2 groups

Comparison of clinical characteristics between the 2 groups

Comparison of the prognosis of the 2 groups

Comparison of prognosis between the 2 groups 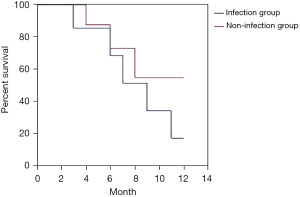 Figure 1 Comparison of survival curves between the 2 groups. 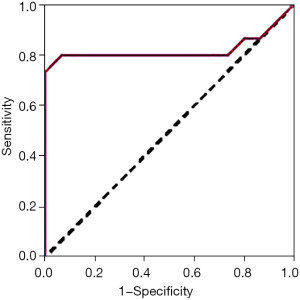 The EBV is DNA virus of the γ subfamily, composed of lipid bilayer, double-stranded DNA and capsid. The target cells of this virus are lymphocytes. It exists in a quiescent state in memory B cells with a long latency period. Primary EBV infection is asymptomatic, and this virus can induce malignancy through several pathogenic mechanisms (14-16). Childhood ALL is relatively common in clinical practice, and although many studies have analyzed the mechanisms of childhood ALL, no specific mechanisms have been identified, and it is generally accepted that the disease is associated with several factors, including the environment, opportunistic infections, and genetics (17). In recent years, studies on the relationship between EBV infection and childhood ALL have gradually increased, but fewer studies have been reported on the impact of this viral intervention on the clinical features and prognosis of childhood ALL. In this context, this paper analyzed the clinical characteristics and prognosis of childhood ALL with EBV infection, in order to provide a clinical reference for the study of the relationship between them. The results of this paper showed that 101 out of 162 children with ALL were positive for EBV, a positive rate of 62.35%, indicating a high rate of EBV infection in children with ALL.

In this paper, we compared the clinical features of EBV-infected and non-infected children and found differences in the first symptoms, karyotype, immunophenotyping, clinical risk, secondary infection during chemotherapy, and lymphocyte subsets, suggesting that EBV infection is associated with these clinical features. More than half of primary EBV infections occur in children under 5 years old, such children present only with respiratory infections or infectious mononucleosis, and EBV infection is associated with hepatosplenomegaly in children (18,19). The results of this paper showed that the highest percentage of first symptoms were hepatosplenic lymph node enlargement in infected patients compared to non-EBV infected children, which further supports the conclusion that EBV infection can cause hepatosplenomegaly and is consistent with the characteristics of this virus. It has been shown (20,21) that EBV primarily infects B lymphocytes by viral glycoprotein binding to complement receptors on the surface of B lymphocytes. The results of this paper found that EBV infection was associated with the immunophenotype of the children, with the number of B-cell type cases being higher than the T-cell type in the infected group, which further suggests that the target cells of EBV are B-cells. However, a study has shown (22) that EBV can also infect mononuclear macrophages, natural killer cells, and T lymphocytes. This paper found that 12.87% of EBV-infected children were of the T-cell type and that there was a significant difference in the T-lymphocyte subpopulation index between these children and non-infected children, suggesting that EBV can infect T-lymphocytes in addition to B-lymphocytes, thus affecting the relevant index.

As the incubation time of EBV increases, the host’s internal environment is disturbed, the immune system is disrupted, and immune impairment occurs, which in turn leads to a reduction in the body’s ability to resist external aggression and an increased risk of infection (25-27). The results of this paper show that there is a significant difference between the 2 groups of childhood ALL in terms of clinical risk and whether infection occurred during chemotherapy, which is related to EBV infection, suggesting that childhood ALL patients with EBV infection have a weakened immune system and attention should be given to the occurrence of infection during treatment. These children are at high risk of disease and should be given priority attention to improve their prognosis and reduce the risk of adverse events.

Although the results of this paper suggest that EBV infection can affect the clinical features and prognosis of childhood ALL, the specific mechanisms of action have not been analyzed in depth and therefore further analysis is needed in subsequent studies in the hope of benefiting more children with ALL.

In summary, the results of this paper show that children with ALL who are EBV positive are characterized clinically by hepatosplenic lymph node enlargement, low prognostic survival rate, low chemotherapy remission rate, and poor prognosis, and can influence immunophenotyping, clinical risk, and whether secondary infection occurs during chemotherapy, so clinical prediction of childhood ALL and prognosis can be based on EBV infection. Therefore, the condition and prognosis of ALL in children can be predicted according to EBV infection.

Reporting Checklist: The authors have completed the STARD reporting checklist. Available at https://tp.amegroups.com/article/view/10.21037/tp-22-146/rc

Conflicts of Interest: All authors have completed the ICMJE uniform disclosure form (available at https://tp.amegroups.com/article/view/10.21037/tp-22-146/coif). The authors have no conflicts of interest to declare.

Ethical Statement: The authors are accountable for all aspects of the work in ensuring that questions related to the accuracy or integrity of any part of the work are appropriately investigated and resolved. The study was conducted in accordance with the Declaration of Helsinki (as revised in 2013). The study was approved by the Ethics Committee of Heilongjiang Provincial Hospital (No. 2021-01419) and informed consent was taken from all the patients’ guardians.