Glaucoma, an irreversible condition of the eye that can lead to blindness, is characterized by loss of retinal ganglion cells (RGCs), structural changes of the optic nerve head and retinal nerve fiber layer (RNFL), and visual field defects (1,2). The macular ganglion cell complex (GCC), comprising RNFL, ganglion cell layer (GCL), and inner plexiform layer (IPL), can improve the detection of glaucoma (3-5). GCC is superior to RNFL thickness evaluation for early investigation of damage caused by glaucoma, particularly in the diagnosis of very early glaucoma (6).

The gold standard clinical test for glaucoma diagnosis is standard automated perimetry (7), which shows visual field defects when 25% to 40% of RGCs are lost (8). However, this typically reliable and reproducible visual field test is often unsuccessful or difficult to interpret in children because it requires patient cooperation (9).

Optical coherence tomography (OCT) is a noninvasive structural diagnostic device that provides objective measurements and can reveal structural changes in the retina with high-resolution, cross-sectional images. Previous studies have shown that spectral-domain OCT (SD-OCT) can reproducibly measure RNFL thickness in children (10,11). However, the OCT normative databases only include data on adults over 18 and are limited by low representation of Asian subjects (12,13) and lack of child subjects (14). This limits the usefulness of OCT for children as it is inappropriate to compare their results with the adult database (8,9).

In this study, we used SD-OCT imaging to describe macular GCC thickness and its association with systematic and ocular parameters in a cohort of 7-year-old children in China. We present the following article in accordance with the STROBE reporting checklist (available at https://dx.doi.org/10.21037/tp-21-323).

A cross-sectional study was conducted involving 2,505 students from urban areas in Anyang, Henan Province, Central China. The study has been recognized elsewhere for its detailed methodology (15). The Anyang Childhood Eye Study (ACES) was conducted in accordance with the Declaration of Helsinki (as revised in 2013) and was approved by the Ethics Committee of Beijing Tongren Hospital, Capital Medical University, Beijing, China (No. TRECKY2018-030). Each student provided verbal consent and informed written consent was obtained from at least one parent.

Intraocular pressure (IOP) in both eyes was measured 3 times by the same observer using a noncontact tonometer (Huvitz, HNT-7000). The mean value was calculated and taken as the final value for analysis.

The iVue-100 SD-OCT (Optovue, Fremont, CA, USA) was used to measure the right eye of each subject. Images of ocular microstructures were obtained using a scanning laser diode emitting an 840 nm wavelength beam at a speed of 26,000 A-scans per second (16,17). The total scan time was 0.37 seconds per eye.

The protocol for the optic nerve head SD-OCT (iVue-100, Optovue) consisted of 12 radial scans (3.4 mm in length, 459 A-scans each) and 13 concentric ring scans (ranging from 1.3 to 4.9 mm, 429–969 A-scans each) centered on the optic disc (16,17). The areas between the A-scans were interpolated and various parameters were generated to describe the RNFL along a fixed 3.45-mm diameter ring centered on the optic disc. The RNFL values included: (I) average RNFL thickness; (II) temporal, superior, nasal, and inferior average RNFL thickness; (III) 16 sections (22.5° each) of the measurement circle around the optic nerve head (Figure 1); (IV) optic disc parameters including disc, cup, and rim area, cup/disc ratio, rim volume, nerve head volume, and cup volume. 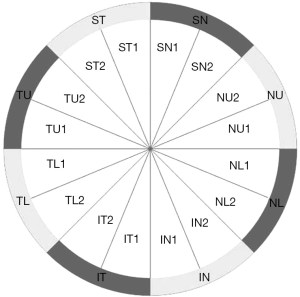 Image quality and integrity assessed with a signal strength index (SSI) higher than 45 (as recommended by the manufacturer) were labeled as good. 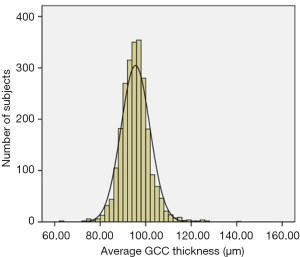 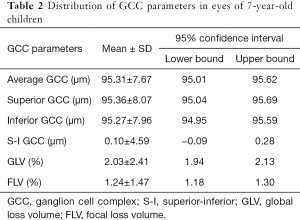 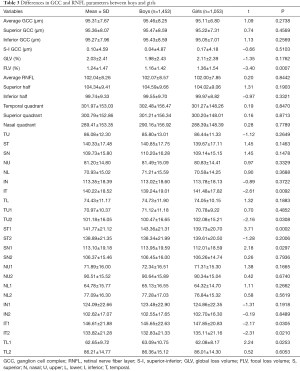 Associations of GCC with ocular and systemic parameters

Consistent with the findings of previous studies (18,19), our study showed GCC thickness had a positive correlation with SE and negative correlation with AL. We also found that hyperopic children had thicker GCC than myopic children (P<0.0001), including superior GCC and inferior GCC (Table 4). GLV was lower in the hyperopia group compared to the emmetropia group (Table 4). However, in several studies, AL and SE (4) were found to have no correlation with GCC thickness. This might be due to the different age of participants (adults versus children), which may indicate that the results are impacted by age. Previous histopathologic studies have shown that increasing AL and eyeball expansion lead to the development of myopia (20). The elongation of the eyeball might result in mechanical stretching and traction, which may make the retina and sclera thinner in myopic eyes (21,22). The mechanical stretching is located mostly at the posterior pole and influences GCC and peripapillary RNFL (18). In addition, we found that S-I GCC and FLV had no correlation with SE. S-I GCC might be used as a parameter to track glaucoma in children; however, more data is needed to support the diagnostic performance of S-I GCC.

Our study demonstrated that GCC thickness had positive correlations with RNFL thickness, fovea parameters, disc area, and rim area and negative correlations with area C-D ratio, H C-D ratio, and V C-D ratio. RNFL parameters and optic disc parameters are useful for detecting glaucoma. However, optic disc tilting, peripapillary atrophy, and oval configuration in highly myopic eyes (23) may influence disc margin determination (24). The disc margin definition can affect RNFL and optic disc parameters, which are less reliable than GCC in the analysis of highly myopic eyes (25). GCC can be a marker for a decrease in RGCs, which can happen before visual field defects are apparent (26). Therefore, GCC may be superior to RNFL and optic disc parameters in the early detection of glaucoma progression (27).

We found that taller height was associated with thicker GCC. In a study of 42,044 participants, height was not associated significantly with GCC (P>0.30), which was measured using 3D OCT-1000 Mark II (Topcon Inc., Tokyo, Japan) (19). In a study of 258 children using the iScan OCT (Optovue), Grundy et al. found no evidence of a relationship between height or weight with either RNFL or GCC (28). These contradictory findings may be explained by differences in the ethnicity of subjects, sample size, and measurement equipment.

We observed no significant relationship between GCC thickness and IOP, which is consistent with previous studies (20,29). However, Khawaja et al. found a negative relationship between GCC thickness and IOP (P=5.8×10−5) (19). IOP above threshold will damage ganglion cells at the lamina cribrosa (30). Furthermore, it is possible that translamina cribrosa pressure difference (TLCPD, IOP minus cerebrospinal fluid pressure), and not IOP, is associated with the pathogenesis of glaucomatous optic neuropathy (31).

Age had no any significant association with GCC thickness, which is consistent with some previous studies (18,32). However, several studies have demonstrated a thinner retinal thickness with older age in adults (19,30), although this inconsistency may be due to our participants being young children. It would be useful to do a longitudinal study of GCC thickness and age in the future.

In our study, no significant differences were observed between girls and boys in average GCC thickness, superior GCC thickness, inferior GCC thickness, S-I GCC, or GLV. Similarly, Bloch et al. did not find sex differences in GCC thickness (30). However, women were found to have thicker macular inner retinas in the UK biobank (19) study and thinner superotemporal GC-IPL thickness in the Singapore Chinese Eye Study (SCES) (33). Although these studies found a significant association between inner retinal thickness and sex, their findings are based on a smaller sample size. Additionally, the correlation between GCC thickness and sex may vary among different ethnic groups. We found that BCVA, waist, head circumference, cup area, and cup volume were not correlated with GCC thickness, similar to the results of another report (28).

Our sample size of healthy Chinese children was large and the study was a school-based design, not population-based design. The schools were chosen to broadly represent the region. However, our study has several limitations that should be kept in mind. Our study only included children in the first grade and it would be beneficial to include child participants across a wide age span. By limitation of the ACES methodology, a noncontact tonometer was used to measure IOP rather than the Goldmann tonometer.

The authors thank the Anyang government for helping to organize the survey.

Reporting Checklist: The authors have completed the STROBE reporting checklist. Available at https://dx.doi.org/10.21037/tp-21-323

Conflicts of Interest: All authors have completed the ICMJE uniform disclosure form (available at https://dx.doi.org/10.21037/tp-21-323). The authors have no conflicts of interest to declare.

Ethical Statement: The authors are accountable for all aspects of the work in ensuring that questions related to the accuracy or integrity of any part of the work are appropriately investigated and resolved. The Anyang Childhood Eye Study (ACES) was conducted in accordance with the Declaration of Helsinki (as revised in 2013) and was approved by the Ethics Committee of Beijing Tongren Hospital, Capital Medical University, Beijing, China (No. TRECKY2018-030). Each student provided verbal consent and informed written consent was obtained from at least one parent.