Citrin deficiency (CD) is an autosomal recessive genetic metabolic disease arising from a functional defect of citrin, the aspartate/glutamate carrier isoform 2 in the mitochondrial inner membrane of the hepatocyte in humans (1,2). The causative gene SLC25A13 is localized at chromosome 7q21.3 and spans about 200 kb in length with 18 exons and 17 introns (3). Citrin functions to exchange aspartate synthesized by the mitochondrial matrix with glutamate and a proton in the cytoplasm of the hepatocyte, playing distinct roles in the urea cycle, malate-aspartate shuttle and gluconeogenesis (4-7).

According to the findings of human genetic diversity, the Chinese population can be divided into 2 large groups from the north to the south along the boundary of the Yangtze River (10,11). The carrier frequency of SLC25A13 mutations in the north (1/940) was found to be significantly lower than that in the south (1/48) (12); however, the prevalent mutation c.1751-5_1751-4ins(2684) was uncovered in 2008 (13), and thus was not included in the previous study. Notably, most research participants in previous studies were from the middle and coastal areas of China, and an epidemiologic study of CD in the northwest China has not yet been conducted.

Shaanxi Province is located in northwest China and adjoins the other 8 provinces. In this study, the 4 prevalent SCL25A13 mutations were screened using 981 additional peripheral blood samples collected from 4 peripheral cities in Guangdong and 2,746 of these samples from different cities in Shaanxi. The carrier frequencies of the prevalent mutations and the morbidity rates of CD were then calculated and their distribution was compared.

We presented the following article in accordance with the STROBE reporting checklist (available at http://dx.doi.org/10.21037/tp-21-58).

According to the latest official data by the National Bureau of Statistics, China, the permanent resident populations of the provinces of Guangdong and Shaanxi at the time of this study were 104 and 37 million, respectively (http://www.stats.gov.cn/tjsj/tjgb/rkpcgb/). In order to achieve statistical significance, the sample sizes were calculated to be at least 1,953 and 695 on the basis of the estimated carrier rates of 1/48 in Guangdong and 1/940 in Shaanxi by using the online sample size calculator EPITOOLS (https://epitools.ausvet.com.au/twoproportions), with a confidence level of 95% and the power of 0.99. In the case of sample loss and a higher carrier rates of CD in Shaanxi, more participants were added to enlarge the sample size. A computer-based randomization was used to select samples from each of the regions. The number of samples from each region was in accordance with the population distribution.

Besides the 2,428 samples in our previous study (9), we collected an additional 981 blood samples for health examination from 4 peripheral cities (Heyuan, Shaoguan, Shantou, and Yunfu) in Guangdong and 2,746 of these samples from 10 cities (Yan’an, Yulin, Weinan, Xianyang, Baoji, Xi’an, Tongchuan, Hanzhong, Shangluo, and Ankang) in Shaanxi between June 2016 and December 2018 (Figure 1). 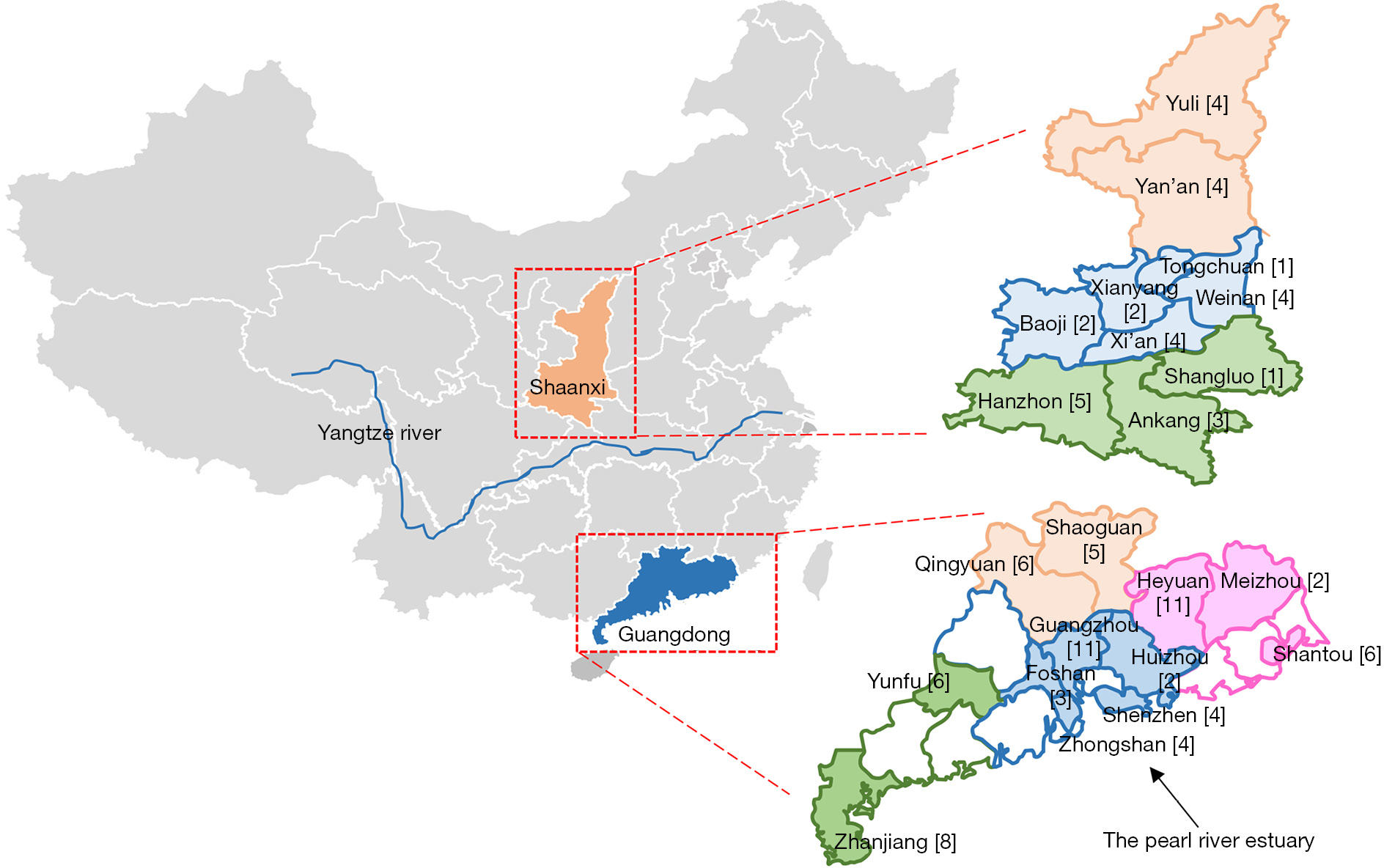 Figure 1 Geographic distribution of the mutated SLC25A13 alleles in different cities of the Guangdong and Shaanxi provinces of China. Guangdong Province comprises of 4 regions: north (orange), west (green), east (pink), and the Pearl River Delta area (blue). Shaanxi Province comprises of 3 areas: north (light orange), center (light blue) and south (light green). The mutated SLC25A13 alleles from different cities are marked in parentheses. This figure was generated by means of the software WPS Office PowerPoint 2019. The base map was created by incrementally assembling the outlines of the Chinese administrative regions, which could be downloaded via the URL link http://www.900ppt.com/.

This study was conducted in accordance with the Declaration of Helsinki (as revised in 2013) and was approved by the Medical Ethics Committee of the First Affiliated Hospital, Jinan University, Guangdong, China (NO.: KY-2019-052, 2015-038, 2014-004). Participants were genotyped retrospectively using blood samples previously collected for the purpose of health examination. The data related to individual identification were anonymized during the entire study process. Therefore, informed consent was waived.

Four primers, MuI-3NF (5'-TGGCAATTTGAATAACATCAGATGAC-3', forward), MuI-NR1-AP2 (5'-ACTATGGGGCCGTTCAATGTCTGCTAAGGTCATA-3', reverse), MuI-AF4-AP2 (5'-ACGCGTGTGTTGTTTTTCCCCTACAGACGAC-3', forward) and MuI-9AR (5'-CAGTGACACCAACACGGGATTCT-3', reverse), were designed for the multiplex PCR amplification of mutation c.852_855del (Figure 2A); the optimal concentrations of the 4 primers were set at a ratio of 1:1:0.5:0.5, respectively. The PCR cycling condition included an initial denaturation step of 94 °C for 5 min, 35 cycles of denaturation at 94 °C for 30 sec, annealing at 57 °C for 30 sec and extension at 72 °C for 1 min, as well as a final extension at 72 °C for 7 min. 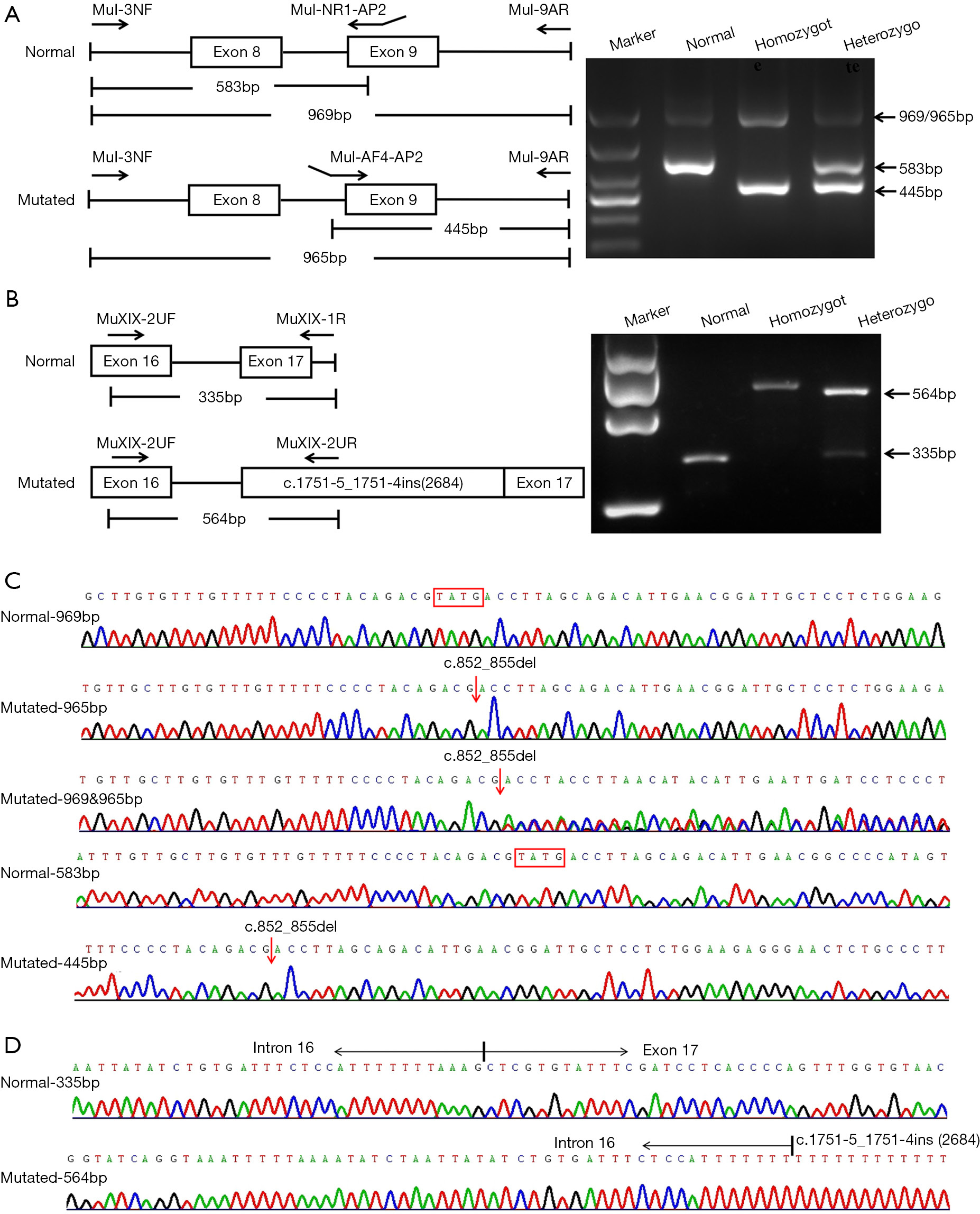 The mutated SLC25A13 allele frequencies, carrier frequencies and CD morbidity rates in different areas were calculated based on the Hardy-Weinberg equilibrium. The genotypes AA (healthy individual), AB (carrier) and BB (patient) of a biallelic genetic marker were expected to have the relative frequencies of p2, 2pq and q2, with p and q being the A (wild type) and B (mutant) allele frequency, respectively; thus, p+q=1. The values of 2pq and q2 represented as the carrier frequency of SLC25A13 variants and CD morbidity rate, respectively (15,16).

To evaluate the reliability of the new PCR methods in this study, the 4 prevalent SLC25A13 mutations were detected in the 200 samples of Qingyuan city, and the results were completely consistent with those in the previous study by using HybProbe assay and HRMA approaches (9). 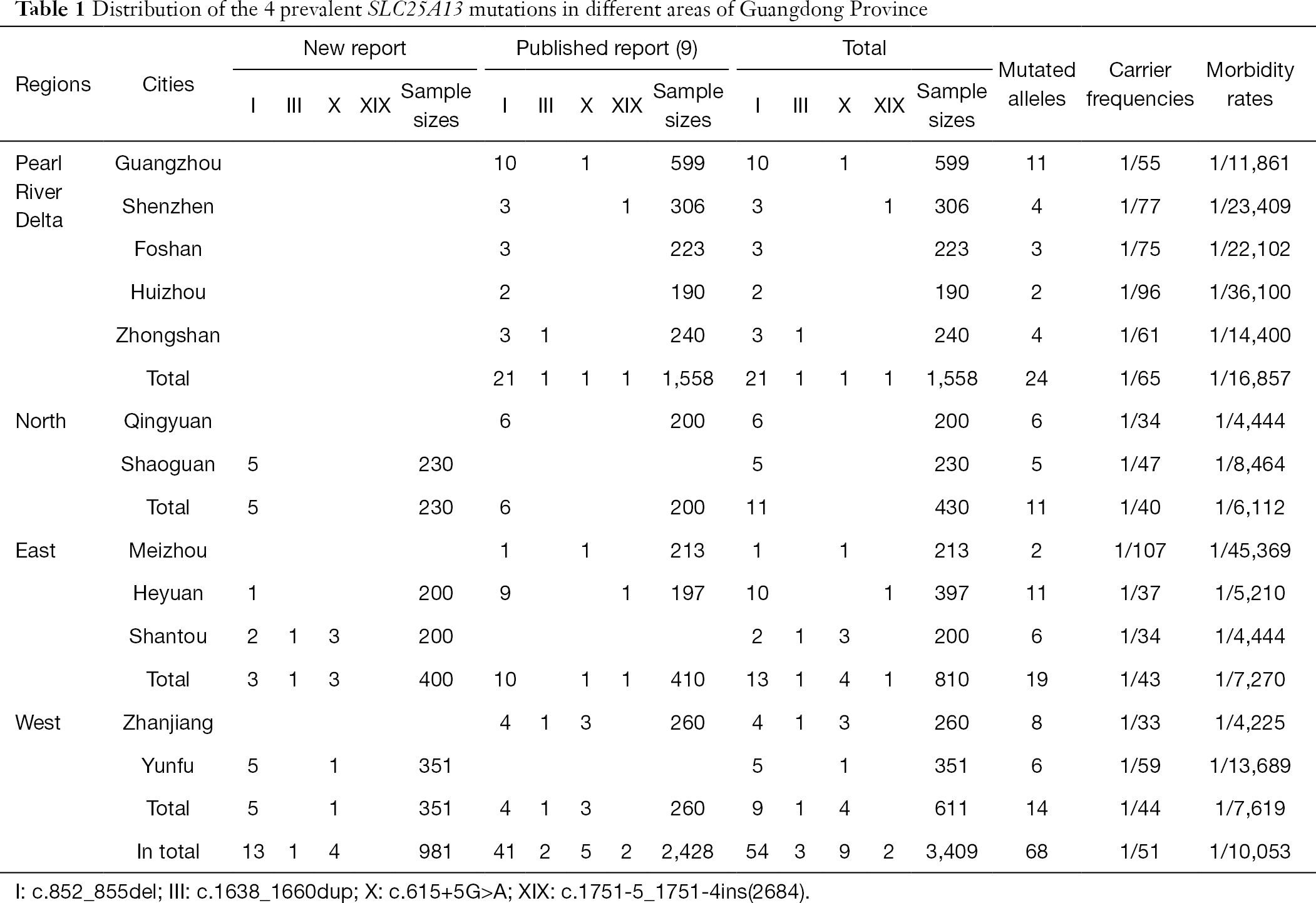 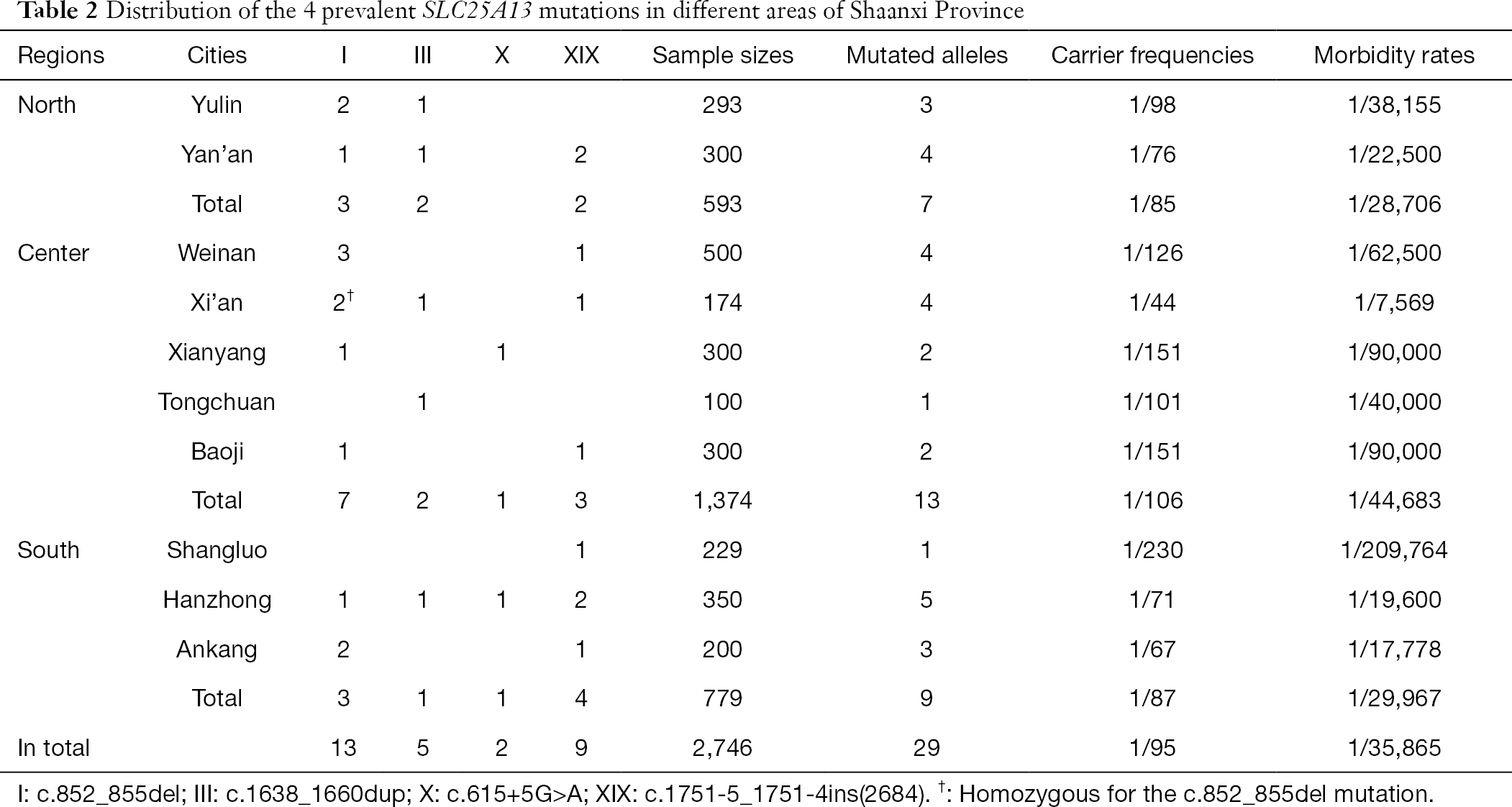 The mutated alleles, carrier frequencies, and morbidity rates among different administrative cities and geographic regions were shown in Tables 2 and 3.

Melting curve analysis, including the combination of HybProbe assay and High Resolution Melting Assay, has proven to be a convenient and rapid method for the screening of the 4 prevalent SLC25A13 mutations (9,17-19), but it is technically complex and expensive. Multiplex-PCR consists of multiple sets of primers in a single PCR mixture. By simultaneously amplifying more than 1 fragment in the same reaction, 1-step multiplex PCR was more efficient than simplex PCR (20,21). The c.852_855del and c.1751-5_1751-4ins(2684) mutations are a 4-base deletion in exon 9 and an about 3-kb insertion in intron 16 of the SLC25A13 gene, respectively, and have been screened by the newly developed multiplex PCR methods. As shown in Figure 2, with 2–3 sets of primers in the same PCR reaction, clear and distinguishable amplified DNA fragments covering the wild-type and mutated SLC25A13 alleles were obtained. The combination of conventional PCR/PCR-restriction fragment length polymorphism and newly developed multiplex PCR methods for the detection of 4 prevalent mutations proved to be feasible in a large-scale population analysis in the present study.

In this study, the 4 prevalent SLC25A13 mutations were screened in the 981 new samples from 4 peripheral cities in Guangdong provinces. The sample size was expanded from 2,428 to 3,409, and the proportions in the 4 geographic regions of Guangdong were thereby made more representative. The 68 carriers identified thus far demonstrated a carrier rate of 1/51 and a theoretical CD morbidity of 1/10,053 in this population, which decreased slightly but might have been more precise than that found in our previous study (9). Data from our previous study showed the mutation carrier rate in the peripheral cities (1/34) to be significantly higher than that in the Pearl River Delta area (1/60). However, when more peripheral cities were enrolled in this study, no significant difference of the carrier rate was found between the 2 areas. The reasonable enlargement of the study population minimized the bias of the molecular epidemiology study and increased the screening reliability, providing more accurate laboratory evidences for the evaluation of CD effect on the Guangdong population.

For the first time, this study identified 29 mutated SLC25A13 alleles in the 2746 healthy residents in Shaanxi, a province in the northwest China, with a carrier frequency 1/95 and a CD theoretical morbidity rate of about 1/35,865. Surprisingly, the mutated SLC25A13 allele frequency in the Shaanxi population was higher (29/5,492 vs. 1/1,880, χ2=7.792, P=0.005) than that previously found in north China (Liaoning, Beijing, Hebei, Shandong, and Henan) (12), suggesting that the CD prevalence might be underestimated at least in northwest China. Among 4 prevalent mutations, c.852_855del (44.82%) and c.1751-5_1751-4ins(2684) (31%) accounted for almost 75%, suggesting that when performing CD genetic testing, analysis of these 2 mutations should be mandatory in this province. Statistical analysis within the present study discovered homogenous distribution of the prevalent SLC25A13 mutations among different geographic regions in Shaanxi, and hence different molecular targeting might be unnecessary for CD diagnosis in Shaanxi Province.

The distribution comparison revealed that the Guangdong population had a significantly higher mutated SLC25A13 allele frequency than that of Shaanxi, supporting the notion that different geographic distribution of SLC25A13 gene mutations exist in China. It is worth noting that the mutated allele frequency of c.852_855del was significantly higher while that of c.1751-5_1751-4ins(2684) was lower in Guangdong compared to Shaanxi. It has been reported that modern humans colonized East Asia via southern and northern routes on both sides of the Himalayas (22,23). In this study, the 2 prevalent mutations with a different geographic distribution might be attributed to the genetic flow which occurred between distinct founding populations, and their relatively higher frequency could be explained as a result of the founder effect. Actually, the c.852_855del and c.1751-5_1751-4ins(2684) mutations are relatively frequent in East Asia (13,18,19,24-26), with the former being reported as having originated around the Guangxi and Yunnan areas in south China (12) and the latter exhibiting high allele frequency (33–45.5%) in Korean (13,26), which is located in the northeast of the Asian continent.

Some limitations in this study should be addressed. Firstly, only focusing on the 4 prevalent mutations might have overlooked other pathogenic SLC25A13 variants in general human populations. Secondly, there might be sampling bias in the 2 provinces. The proportions of research participants in different regions were similar but not identical with the population distribution. Therefore, further epidemiology study focusing on more SLC25A13 variants and with larger sample sizes from the 2 provinces is in need.

This study highlighted the feasibility of the combination of the conventional PCR/PCR-restriction fragment length polymorphism and the newly developed multiplex PCR methods for the detection of 4 prevalent SLC25A13 mutations in a large-scale population. The findings clarify the molecular epidemiological features of CD in Guangdong and Shaanxi populations, providing preliminary but nonetheless significant laboratory evidence for subsequent CD diagnosis and management in these 2 provinces in mainland China.

The wordings of the main text, figures and tables have been checked by the AME Editing Service ().

Reporting Checklist: The authors have completed the STROBE reporting checklist. Available at http://dx.doi.org/10.21037/tp-21-58

Conflicts of Interest: All authors have completed the ICMJE uniform disclosure form (available at http://dx.doi.org/10.21037/tp-21-58). The authors have no conflicts of interest to declare.

Ethical Statement: The authors are accountable for all aspects of the work in ensuring that questions related to the accuracy or integrity of any part of the work are appropriately investigated and resolved. The study was conducted in accordance with the Declaration of Helsinki (as revised in 2013) and was approved by the Medical Ethics Committee of the First Affiliated Hospital, Jinan University, Guangdong, China (NO.:KY-2019-052, 2015-038, 2014-004). Participants were genotyped retrospectively using blood samples previously collected for the purpose of health examination. The data related to individual identification were anonymized during the entire study process. Therefore, informed consent was waived.