N-terminal brain natriuretic peptide precursor (NT-proBNP) is an inactive fragment of the neurohormone brain natriuretic peptide (BNP). BNP and NT-proBNP are released into the peripheral serum by cardiomyocytes in response to stress and pressure posed on the atria and ventricles. NT-proBNP is a cardiac overload biomarker associated with the severity of cardiovascular disease (1) and sepsis (2), as well as long-term physical function decline after cardiothoracic surgery (3). With the deepening of research, NT-proBNP has already gone beyond the category of heart failure diagnostic markers, and has a wide range of clinical application value in other aspects. Critical children in pediatric intensive care unit (PICU) with higher levels of NT-proBNP are common. A previous study in adult patients showed that NT-proBNP level during the acute phase of sepsis was a useful indicator of the risk of long-term impairments in physical function and muscle strength in sepsis survivors (4). Most of PICU children have infection and cardiac insufficiency. Usually, critically ill children in PICU show symptoms of cardiac insufficiency. However, its prognostic value in PICU remains unclear. The purpose of this study was to investigate the predictive value of serum NT-proBNP level on day 1 for the severity and prognosis of PICU. We present the following article in accordance with the STARD reporting checklist (available at http://dx.doi.org/10.21037/tp-21-123).

Children who were hospitalized for 24 hours or more in the First Affiliated Hospital of Guangxi Medical University during the period from July 2017 to June 2018 were selected as research subjects. The exclusion criteria were as follows: (I) those who were hospitalized during the neonatal period and transferred to the PICU due to various factors; and (II) those who were discharged and re-admitted to the PICU for various reasons within 24 hours. According to the pediatric critical illness score (PCIS), the patients were divided into a non-risk group (score of >90), a low risk group (score of 70–90), and a high-risk group (score of <70).

The age, sex, weight, body mass index (BMI), body length, and major disease diagnosis of the patients were collected. Blood samples were collected on the first day in the PICU. The serum NT-proBNP level (pg/mL) was detected by electrochemiluminescence in our laboratory, and the PCIS, age-adjusted Sepsis-related Organ Failure Assessment (SOFA) score, pediatric risk of mortality (PRISM) score, and the numbers of multiple organ dysfunction syndrome (MODS) were recorded on the same day. The prognosis (survival or death) of the study subjects on day 28 was followed up.

Ethics approval and consent to participate

All procedures performed in this study involving human participants were in accordance with the Declaration of Helsinki (as revised in 2013). The study was approved by the Ethics Committee of the First Affiliated Hospital of Guangxi Medical University and the approval number was 2017 (KY-E-101). Informed consent was obtained from the parents of the patient in this study.

In total, 415 children were hospitalized for 24 hours or more in the PICU in the First Affiliated Hospital of Guangxi Medical University. 375 cases were eventually included in this study, and 40 cases were excluded. 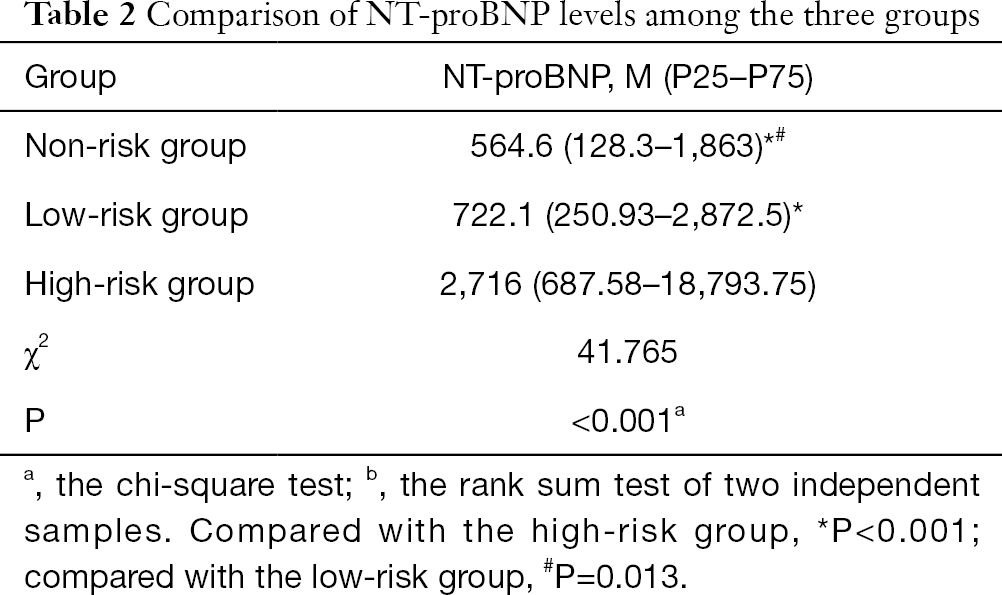 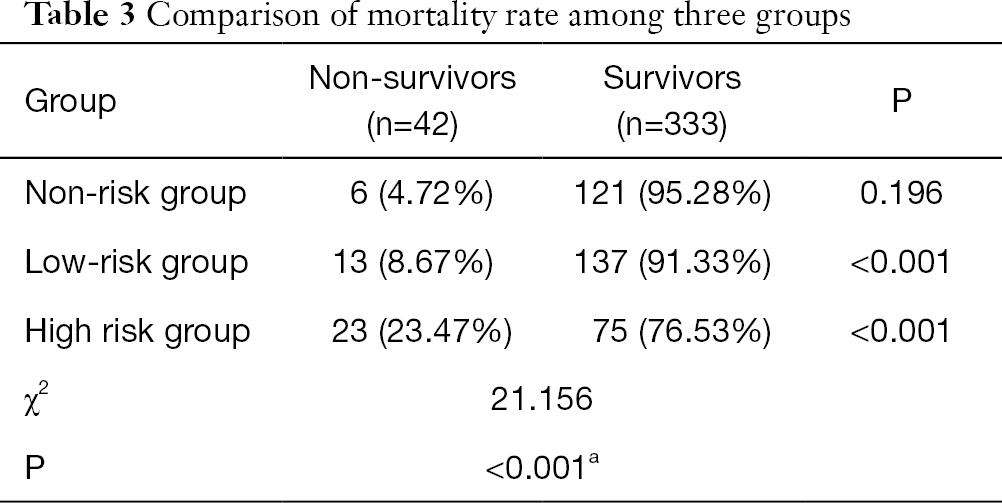 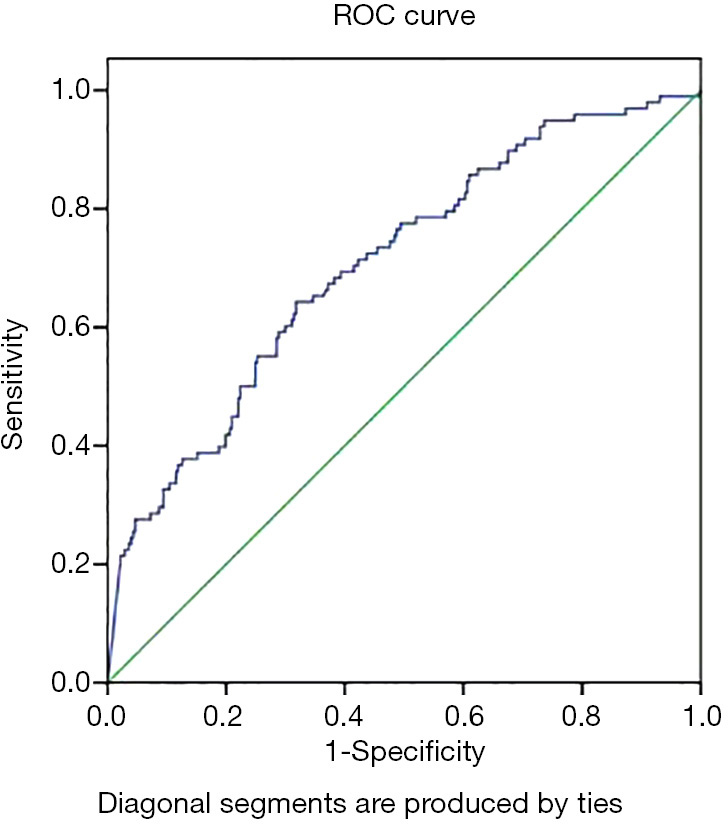 Multivariate analysis of mortality within 28 days

Multivariate binary logistic regression analysis of mortality was performed on serum NT-proBNP levels, PCT, PCIS, SOFA score, PRISM III score, mechanical ventilation time, and number of organs in MODS in the survival and death groups. The results showed that only high SOFA score was a risk factor for death of children in the PICU within 28 days (P<0.01), and NT-proBNP was not an independent factor for 28-day mortality (Table 4).

NT-proBNP can be used as a serological indicator to assess the severity of critically ill children, and has a significant negative correlation with the PCIS score (8). This study also found that the higher the level of serum NT-proBNP, the lower the PCIS score, and the more serious the condition is. The elevation of NT-proBNP in critically ill children is primarily associated with increased secretion and metabolic disorders. NT-proBNP is mainly synthesized and secreted in the ventricle. Increased ventricular load and tension of the ventricular wall are the main conditions that stimulate ventricular secretion of NT-proBNP (9).

Related reports indicate that hypoxia-ischemia, microcirculatory disorders, oxidative stress, and stimulation of pro-inflammatory factors lead to increased cardiac secretion of NT-proBNP (10). The only mode of removal of NT-proBNP is glomerular filtration, the level of which is mainly affected by renal function (11), and is not affected by the natriuretic peptide receptor. Some studies also found that elevated serum NT-proBNP in hyponatremia is caused by craniocerebral diseases, such as infection and bleeding (12).  The present study found that the mortality rate of the critically ill group was significantly higher than that of low-risk and non-risk groups, suggesting that the PICS score is related to the mortality rate. Zhang et al. and other studies also found that the PICS score can better predict the mortality of critically ill children (8).

In addition, the area under the ROC curve of NT-proBNP and the critically ill condition was 0.705, suggesting that it has a good effect on the judgment of extremely critical illness. However, with a critical value of 1,689 ng/mL, its specificity and sensitivity were normal, which was considered to be related to the large number of diseases mentioned in this paper.

In this paper, it was shown that serum NT-proBNP levels were significantly positively correlated with inflammatory markers [C-reactive protein (CRP), Procalcitonin (PCT)], suggesting that serum NT-proBNP levels are associated with inflammatory factors. BNP has anti-inflammatory and anti-fibrotic effects. The pro-inflammatory response in the bodies of patients with sepsis and the toxicity of the pathogen to the heart increases the secretion of BNP/NT-proBNP, while the rejection of NT-proBNP is severely blocked in septic shock, and its level is often high.

This study also showed that serum NT-proBNP was significantly positively correlated with SOFA scores, and studies have found that SOFA scores have a high clinical value in predicting mortality (13,14), suggesting that serum NT-proBNP may be helpful in assess prognosis. Furthermore, serum NT-proBNP levels, mechanical ventilation time, SOFA score, PRISM III score, and MODS were found to be significantly higher in the death group than in the survival group, and the PCIS score was significantly lower in the death group than the survival group. These six indicators maintain a certain degree of value to predict 28-day mortality and the prognosis of children.

The multivariate binary logistic regression of mortality showed that only high SOFA score was a risk factor for mortality of PICU children within 28 days. However, whether NT-proBNP can be used as a predictor of 28-day prognosis requires dynamic monitoring of NT-proBNP levels and supporting evidence from larger samples. Previous studies have shown that serum NT-proBNP can assist in the diagnosis of sepsis, and can also assess the condition and prognosis (15).

In conclusion, serum NT-proBNP is associated with a critical condition in patients. High levels of serum NT-proBNP suggest that the child’s condition is severe, which is useful in predicting the severity of PICU children, however it is not an independent risk factor for prognosis. Considering that this is a single-center study, and there is no study on the impact of serum NT-proBNP level changes on the condition and prognosis of children, and the numbers of patients included in the research was relatively small, more large-scale clinical research is required to validate the conclusions of this study.

The authors would like to thank Dr. Dev Sooranna, Imperial College London, for editing the manuscript.

Reporting Checklist: The authors have completed the STARD reporting checklist. Available at http://dx.doi.org/10.21037/tp-21-123

Conflicts of Interest: All authors have completed the ICMJE uniform disclosure form (available at http://dx.doi.org/10.21037/tp-21-123). The authors have no conflicts of interest to declare.

Ethical Statement: The authors are accountable for all aspects of the work in ensuring that questions related to the accuracy or integrity of any part of the work are appropriately investigated and resolved. All procedures performed in this study involving human participants were in accordance with the Declaration of Helsinki (as revised in 2013). The study was approved by the Ethics Committee of the First Affiliated Hospital of Guangxi Medical University and the approval number was 2017 (KY-E-101). Informed consent was obtained from the parents of the patient in this study.