Asthma is a chronic respiratory disease that involves the immune system and the respiratory system. It usually occurs in infants and young children, and it is estimated that the global incidence of asthma in children aged 6–7 years is 9.4% (1). The age of onset of asthma is usually relatively young, indicating that the environment during pregnancy may play an important role in the onset of the disease (2). Asthma is a heterogeneous disease with many different phenotypes. Early childhood asthma and allergic asthma are more common in boys, and girls’ asthma attacks tend to increase around puberty (3,4).

Vitamin D is a fat-soluble vitamin and secretory hormone, which is mainly produced when the skin receives ultraviolet radiation from sunlight, and it can also be obtained from a few dietary sources (5). The source of vitamin D for the fetus is completely dependent on the mother and is transmitted through the placenta in the form of vitamin 25 (D) (6). Vitamin D deficiency is common in pregnant women (6) and, importantly, is associated with adverse health outcomes for the mother and her offspring (7-9). In particular, vitamin D deficiency during pregnancy can affect the lung and immune function of the offspring and can promote the development of childhood asthma (10,11).

A joint analysis of two randomized controlled trials found that prenatal vitamin D supplementation can significantly reduce the risk of asthma by 26% (12-14). However, previous observational studies examining prenatal or neonatal 25(OH)D status have not found an association with asthma risk (15-18). This may be due to the small sample size or the short follow-up time. This study aims to explore the impact of neonatal vitamin D levels on the incidence of asthma in children aged 3–9 years in a large population sample. We present the following article in accordance with the MDAR checklist (available at ).

Newborns in our hospital from January 2008 to January 2011 were selected. Inclusion criteria were as follows: (I) vitamin D was measured and fully recorded at birth; (II) complete and relevant clinical and demographic data were registered at birth; (III) Medical records of onset of asthma between the ages of 3–9 years were available. Based on these criteria, a total of 1,534 subjects were included. All procedures performed in this study involving human participants were in accordance with the Declaration of Helsinki (as revised in 2013). Parental informed consent was obtained on behalf of all subjects, and the study was approved by the Research Ethics Committee of Haikou Hospital of The Maternal And Child Health.

The clinical and laboratory test data of all subjects at birth were collected, including 25(OH)D3 levels, gender, birth season, and birth weight; whether delivery was premature, cesarean section, or primipara; and parental details including maternal age, ethnicity, level of education, history of smoking, and history of maternal or paternal asthma.

Vitamin D levels were evaluated by 3.2 mm punch measurement of 25(OH)D2 and 25(OH)D3. An equivalent serum analysis was used by the laboratory to evaluate vitamin D (19). The liquid chromatography-tandem mass spectrometry (LC-MS) method was used for the sample preparation and analysis (20), which was calibrated and controlled by a PerkinElmer MSMS kit (PerkinElmer, USA). The intra- and inter-assay coefficients of variation for 25(OH)D3 were 7–12% and 7–20%, respectively, and for 25(OH)D2 were 4–8% and 9–18%, respectively. The lower limit of quantification (LLOQ) of 25(OH)D3 was 4 nmol/L, and the LLOQ of 25(OH)D2 was 3 nmol/L. To correct the 25(OH)D3 concentration to reflect the bioequivalent concentration of serum, the following formula was used: Serum 25(OH)D3 nmol/L=DBSS 25(OH)D3 nmol/L ×1/(1–0.61), where 0.61 was the red blood cell pressure integral of capillary blood.

SAS 9.4 software (SAS, United States) was used for the statistical analysis. The subjects were allocated to an asthma group or a normal control group based on whether they had developed asthma between the ages of 3–9 years. Categorical variables are displayed as the number of cases (percentage), and continuous variables are displayed as mean ± standard deviation or median (interquartile range). The differences between groups were compared by the χ2 test or Kruskal-Wallis test. 25(OH)D3 was used as a continuous variable to analyze its correlation with the risk of asthma by implementing the Cox proportional regression model. The subjects were divided into four groups according to their 25(OH)D3 quartiles, and the first quantile group was used as a reference to analyze the risk of asthma in the other groups. Further subgroup analysis was conducted according to the patients' gender and birth season.

Among the 1,534 subjects included, there were 107 cases in the asthma group and 1,427 cases in the normal control group. Compared with the control group, the level of 25(OH)D3 in the asthma group was significantly lower (P=0.03), the mother’s education level was lower (P=0.002), but the preterm birth rate, cesarean section rate, and parental asthma prevalence rate were significantly higher (all P<0.05). There was no significant difference between the two groups in terms of birth season, birth weight, primiparity rate, maternal age, and maternal ethnicity (P>0.05), as shown in Table 1. 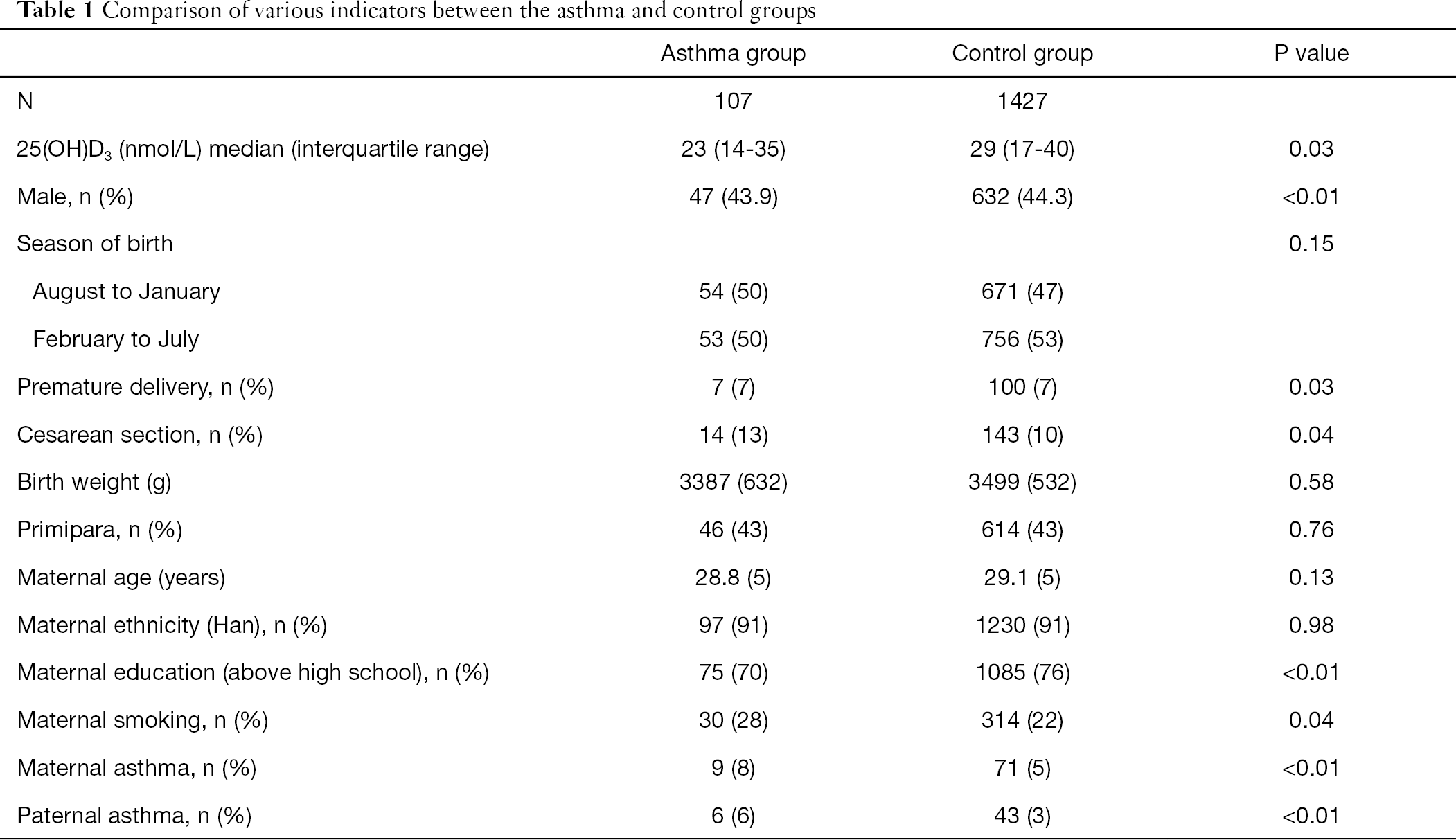 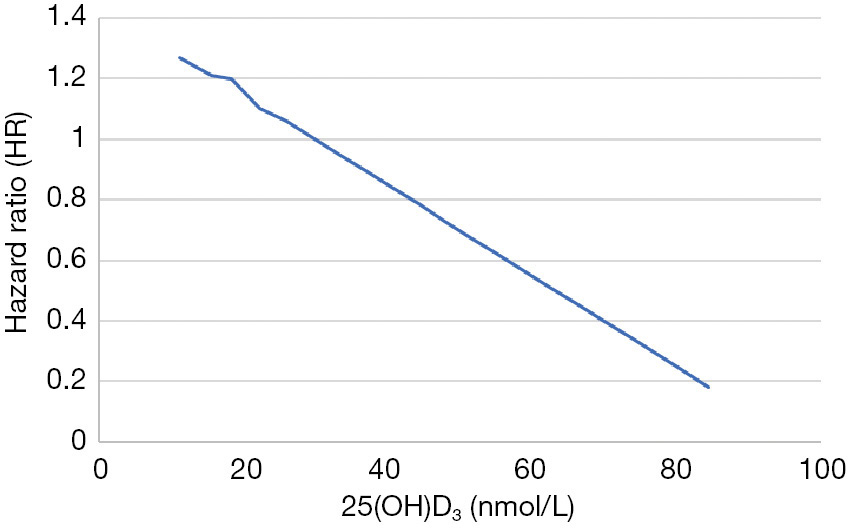 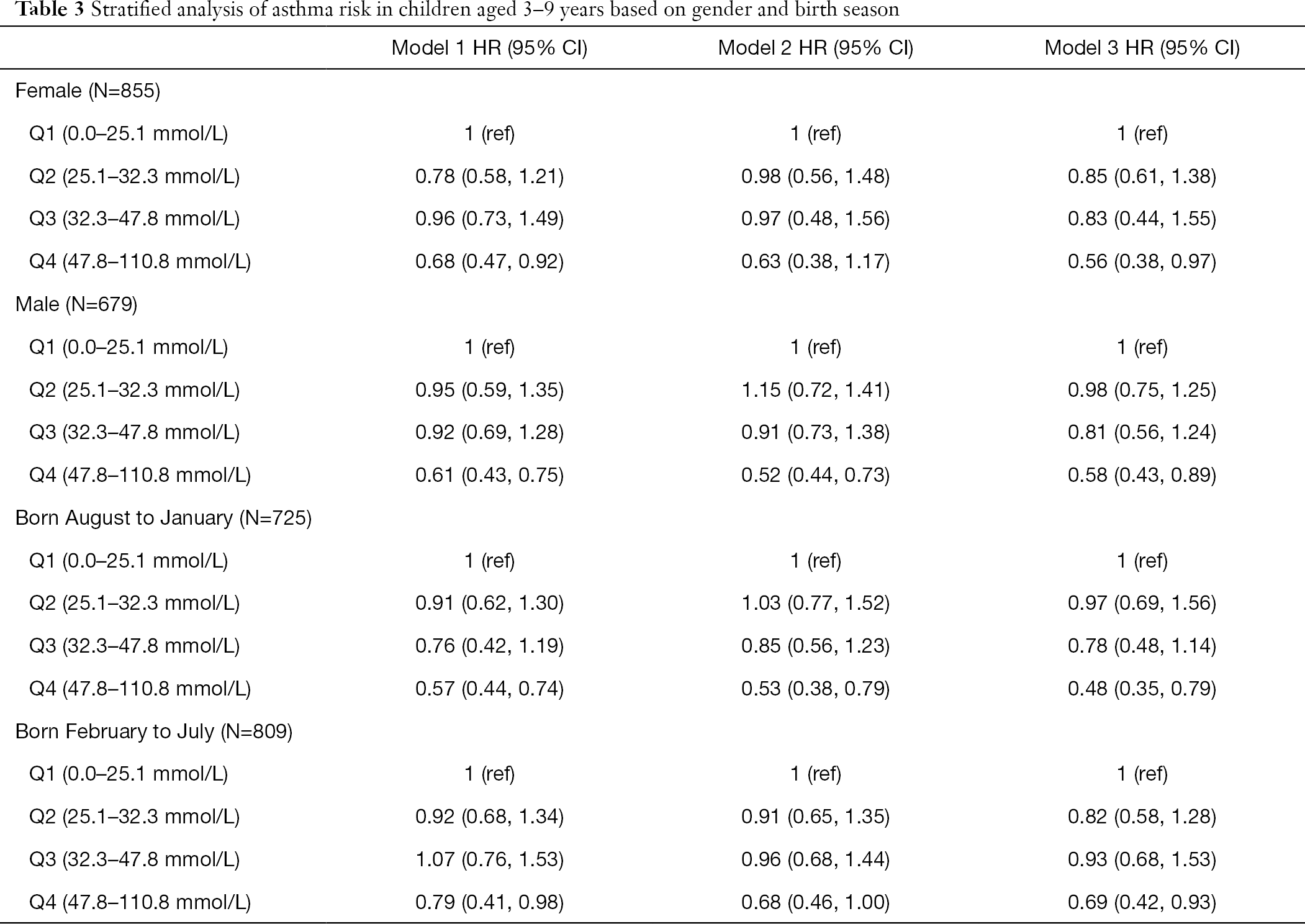 This study found that, compared with the lowest quartile of neonatal 25(OH)D3 concentration, neonates in the highest quartile had a significantly lower risk of developing asthma between the ages of 3–9 years, and it still held when the stratified analysis was based on the gender and birth season of the newborn. Therefore, the early detection of low neonatal 25(OH)D3 is of great significance for the prevention and treatment of asthma in children aged 3–9 years.

Research suggests that prenatal vitamin D concentration is important for fetal lung and immune system development and can reduce the risk of childhood asthma attacks. Previous studies have observed that in mouse models, vitamin D deficiency in the uterus is associated with the reduction of Lung helper T cell 2 (Th2) and regulatory T (Treg) cells (19). In the pathogenesis of asthma, Th2 causes airway hyper-responsiveness and remodeling through inflammatory pathways (20). In addition, studies have shown that changes in lung protein expression in newborns are related to maternal vitamin D deficiency (21). In a human clinical study, mothers who were supplemented with 4,400 U/d vitamin D during pregnancy showed a greater increase in the production of pro-inflammatory cytokines than mothers who were supplemented with 400 U/d vitamin D, and it is known that a stronger cytokine response can reduce respiratory infections. It is suggested that vitamin D can enhance the immune response, thereby reducing the risk of asthma (22).

Similar to the results of this study, two observational studies found that 25(OH)D3 levels during pregnancy were significantly negatively correlated with the incidence of spring asthma in newborns (23,24). A study found that compared to boys with 25(OH)D3 >50 nmol/L in the neonatal period, boys with 25(OH)D3 <50 nmol/L have a significantly higher risk of asthma at 6 years old (23). Another study found that children with 50 nmol ≤25(OH)D3 <75 nmol/L before delivery have a lower risk of asthma at 4 years old than those born to mothers with less than 50 nmol/L (24). However, most studies have not found a significant association between maternal prenatal vitamin levels and childhood asthma (13,15,25,26), which may be related to the difference in risk detection ability and the small sample size of each study. Chawes et al. (27) found that children with a cord blood 25(OH)D concentration <50 nmol/L (n=136) had a higher risk of asthma than those with a concentration >75 nmol/L (n=39) (OR 1.60), but the difference was not statistically significant (95% CI: 0.49–5.22). Another report showed that compared to newborns with <30 nmol/L in the third trimester, newborns with 25(OH)D >75 nmol/L had an increased risk of spring asthma at 9 years of age (28). This was contrary to the findings of our study, which may be related to the small sample size of the study (19 cases), or it may be related to the 25(OH)D measurement method and time, the definition of asthma, age at diagnosis, study design, or the applied statistical analysis. In addition, these studies were conducted in different populations at different time points, and the follow-up time was different. The combined analysis of two randomized controlled trials found that taking vitamin D supplements before childbirth significantly reduced the risk of asthma at age 3 (OR =0.74, 95% CI: 0.57–0.96), but there was no significant difference in long-term risk (at age 6) (OR =1.21, 95% CI: 0.63–2.32) (29,30). This may be related to the difference in the definition of age interval or asthma in the analysis method.

This study found for the first time a clear correlation between neonatal vitamin D levels and the risk of asthma in children aged 3–9 years. In this study, DBSS measurement instead of plasma or serum measurement was used, the measurement of 25(OH)D concentration was more accurate and effective, and this study used a uniformly diagnosed asthma history in the medical record system, therefore, the diagnosis was true and reliable. However, this study also had certain shortcomings. First, this study failed to include additional maternal information, such as obesity and more chronic disease information when adjusting for confounding factors. Secondly, the DBSS measurement of 25(OH)D3 has certain threshold requirements, and it has a certain correction effect for 25(OH)D3 outside the threshold.

Reporting Checklist: The authors have completed the MDAR checklist. Available at http://dx.doi.org/10.21037/tp-21-92

Conflicts of Interest: All authors have completed the ICMJE uniform disclosure form (available at http://dx.doi.org/10.21037/tp-21-92). The authors have no conflicts of interest to declare.

Ethical Statement: The authors are accountable for all aspects of the work in ensuring that questions related to the accuracy or integrity of any part of the work are appropriately investigated and resolved. All procedures performed in this study involving human participants were in accordance with the Declaration of Helsinki (as revised in 2013). Parental informed consent was obtained on behalf of all subjects and the study was approved by the Research Ethics Committee of Haikou Hospital of The Maternal And Child Health.