Efficacy and tolerability of lamotrigine in the treatment of focal epilepsy among children and adolescents: a meta-analysis

Epilepsy is the most common chronic neurological disease in children (1). Almost 10.5 million children under the age of 15 have active epilepsy, representing approximately 25% of the global population diagnosed with epilepsy (2). In all age groups, focal epileptic seizures are the most common type of epileptic seizures, and in children they account for 40–50% of total seizures (3,4). The etiology of epilepsy can be classified into hereditary, structural, metabolic, or unexplained (5,6). Focal epilepsy mostly falls into the structural or unexplained category.

Compared with adults, there is limited evidence available to guide providers in choosing the most effective first-line drug to treat focal epilepsy in children. Carbamazepine (CBZ) is recognized as the best initial treatment in adult patients. Class III open-label trials have reported that lamotrigine (LTG), a new broad-spectrum antiepileptic drug for the treatment of new or untreated focal epilepsy, has a similar curative effect as that of CBZ and is also better tolerated. In adults, LTG has also been used as the initial drug treatment (7,8). In children, only oxcarbazepine (OXC) has been proven effective as first-line monotherapy, based on class I evidence (8,9). Children who fail to respond to antiseizure drug monotherapy at adequate doses or do not tolerate effective doses should be started on a second antiseizure drug, such as a combination of valproate and ethosuximide or LTG.

Although, the U.S. Food and Drug Administration (FDA) has approved LTG as an adjunct to the treatment of focal epilepsy in adults and children aged 2 years or older, some studies suggest that LTG can also be used as the first line monotherapy in pediatric focal epilepsy (8,10-12). However, there are no clear guidelines or expert consensus to support the use of LTG as monotherapy in focal epilepsy, and clinicians rely more on their own experience than on high-level evidence-based evidence in treatment. Thus, one of the most important questions is how to choose monotherapy drug(s) among several available antiepileptic drugs (AEDs) to manage focal seizures in young patients. To address this question, we conducted a systematic review and meta-analysis to investigate the efficacy and tolerability of LTG in the treatment of children and adolescents with focal epilepsy.

We present the following article in accordance with the Preferred Reporting Items for Systematic Reviews and Meta-Analyses (PRISMA) reporting checklist (available at http://dx.doi.org/10.21037/tp-20-379) (13).

The protocol for this meta-analysis is available in INPLASY (International Platform of Registered Systematic Review and Meta-Analysis Protocols; no. INPLASY202050013).

The search results were screened by 2 reviews independently. All potentially relevant citations were requested and inspected in detail using the full-text version. Disagreements were resolved through discussion, with assistance from a third party if necessary. A PRISMA flow diagram was constructed to show the full study-selection process.

Risk of bias judgments were based on the methods endorsed by The Cochrane Collaboration (14). We assessed the risk of bias in the domains of randomization, patient allocation, blinding, selective reporting, attrition of study participants, and in any other detected sources of bias that may have arisen.

We summarized all dichotomous outcome data using risk ratios (RRs), risk difference (RD), and 95% confidence intervals (CIs) using the Mantel-Haenszel statistical method. When both the intervention and the control groups had 0 events, the RR was not calculated in the meta-analysis as recommended by the Cochrane Handbook (15). Subgroup analyses were performed based on treatment duration (<24, ≥24 to <48, ≥48 weeks).

From the searches for RCTs and quasi-RCTs, 1,102 potentially eligible records were identified. We screened the titles and abstracts of these records for inclusion. Full texts of 30 records were read, and 7 trials met the inclusion criteria (see Figure 1). Of the 7 trials, 3 trials (17-19) evaluated LTG vs. placebo add-on therapy for the treatment of focal epilepsy in children and adolescents. The other 4 trials (10,11,20,21) evaluated LTG versus CBZ/OXC for the treatment of focal epilepsy (we combined CBZ and OXC as a single control group because of the limited number of included studies. We consulted clinical experts to determine if this approach was reasonable and were given proper assurance).

The characteristics of included studies are displayed in Table 1. 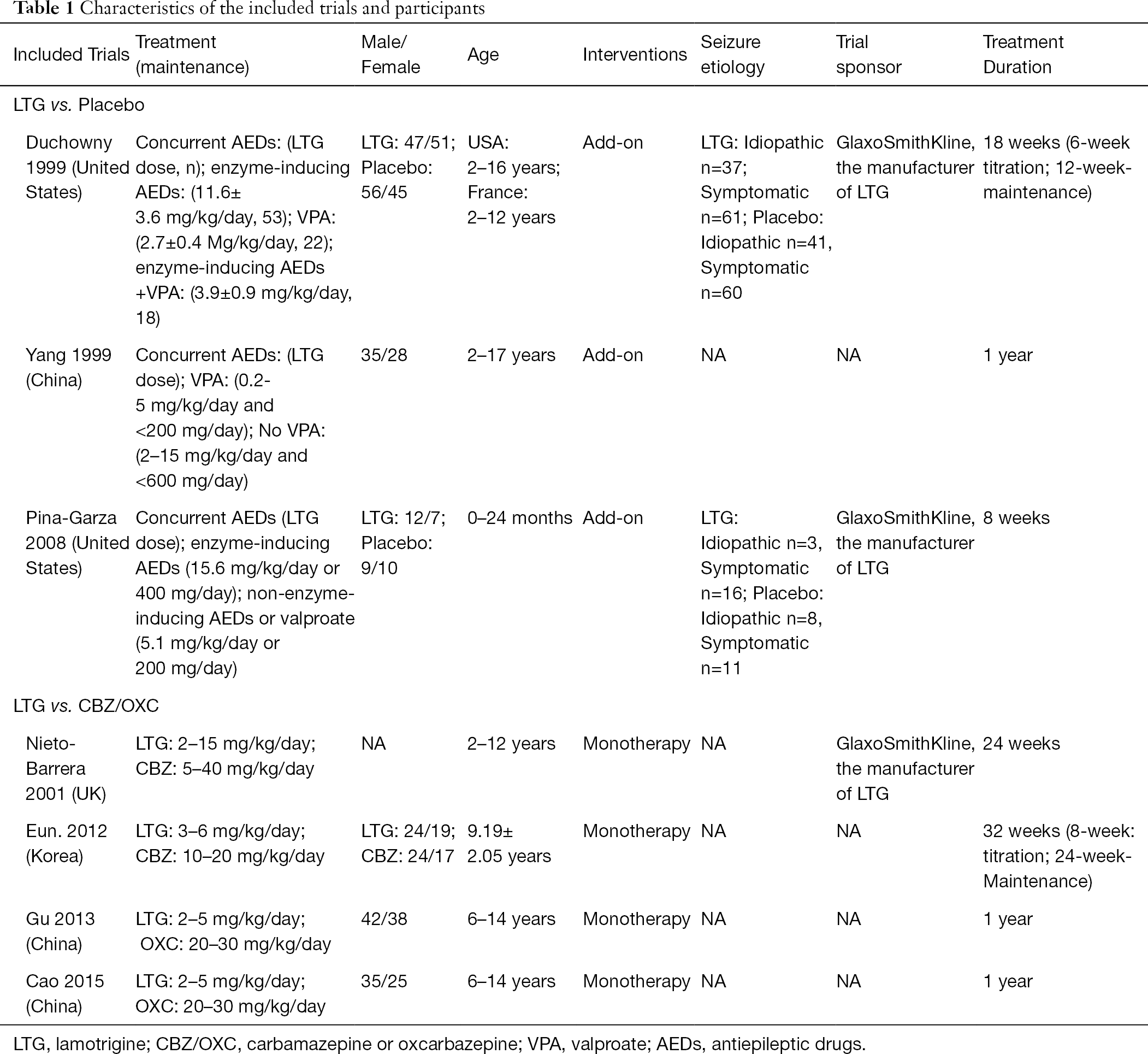 Table 1 Characteristics of the included trials and participants
Full table

Risk of bias in included studies

The risk of bias assessments is summarized in Figure 2 and Figure 3.

Figure 2 Risk of bias graph: review authors’ judgments about risk of bias item presented as percentages across all included studies. 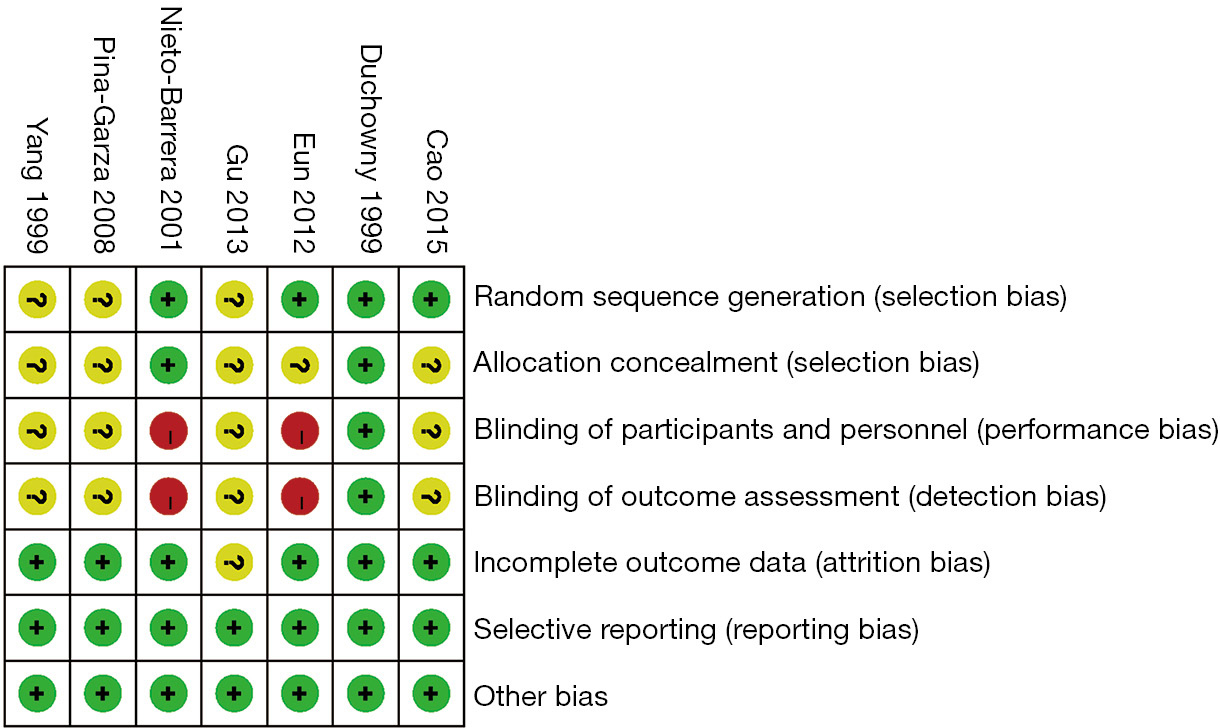 Figure 3 Risk of bias summary: review authors’ judgments about each risk of bias item for each included study.

A total of 4 trials reported the methods of randomization, 2 of which reported adequate methods of allocation concealment. We judged them to be at low risk of bias. When these methods were not reported, we judged these studies to be of unclear risk.

We judged blinding as low risk of bias in 1 study (Duchowny. 1999) because participants, parents, and investigators were blinded. A total of 2 trials were open-label, and we judged them as at high risk of performance and detection bias (Eun 2012; Nieto-Barrera 2001). Due to no details of the method of blinding being provided in 4 studies, we judged their blinding as unclear.

We did not detect any other sources of bias across the included studies.

We included 7 studies in the final analysis. However, the outcomes chosen for this review were not reported in all studies. As planned in our review protocol, we first performed the analysis according to the reported data.

A 50% greater reduction in seizure frequency

LTG vs. placebo for focal epilepsy

A chi-squared test for response to LTG indicated no significant heterogeneity between trials (chi2=0.62, df=1, P=0.43, I2=0%), so a fixed effects model was used to measure efficacy.

We could not calculate the reduction rate in seizure frequency for Pina-Garza (2007) because the primary end point was not reached due to treatment failure, and the reduction data were reported only in an open-label phase.

LTG versus CBZ/OXC for focal epilepsy

A chi-squared test for response to lamotrigine indicated no significant heterogeneity between trials [Chi2=1.66; degrees of freedom (df)=3, P=0.65, I2=0%], so a fixed effects model was used to measure efficacy.

LTG versus placebo for focal epilepsy 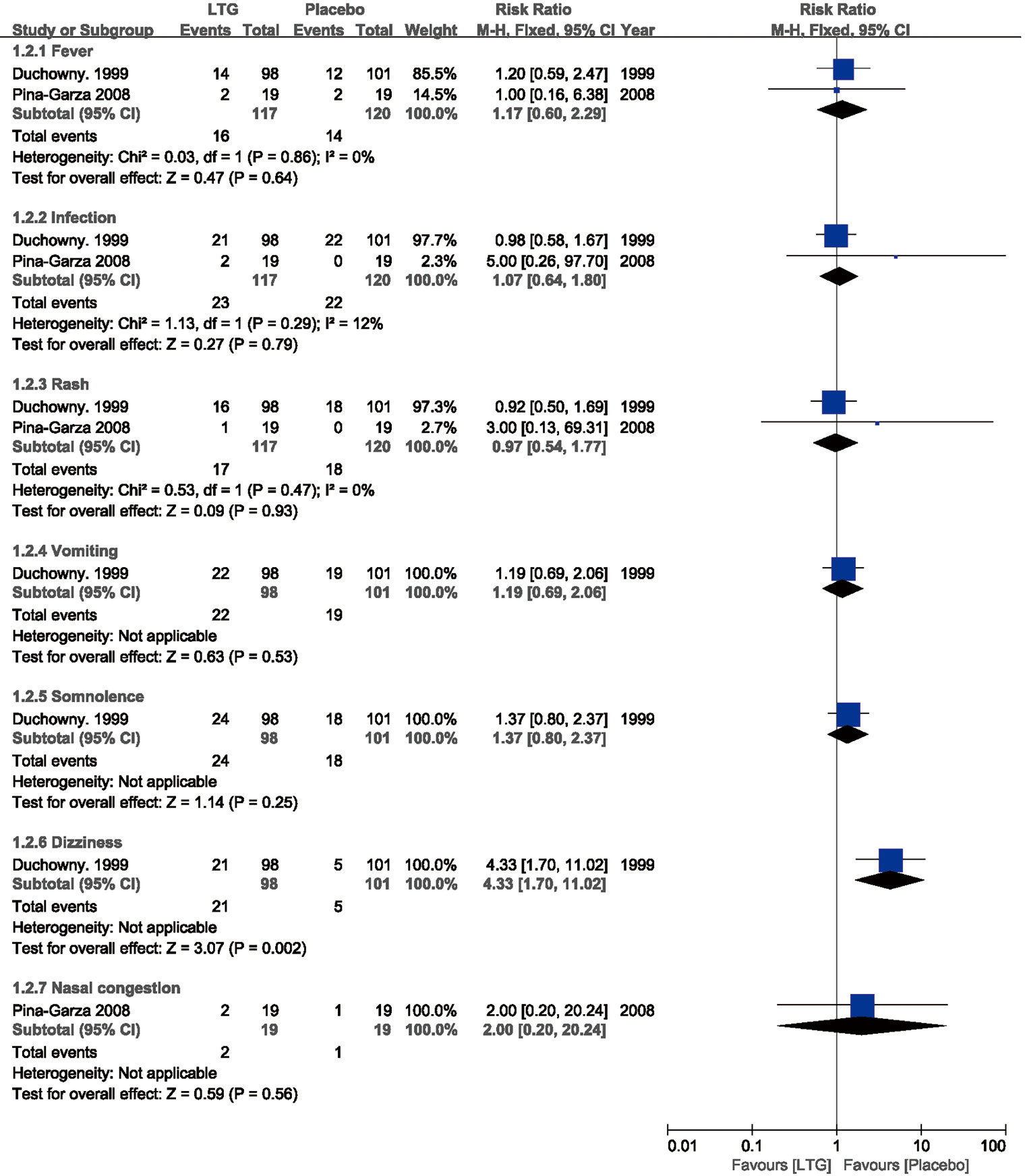 LTG versus CBZ/OXC for focal epilepsy 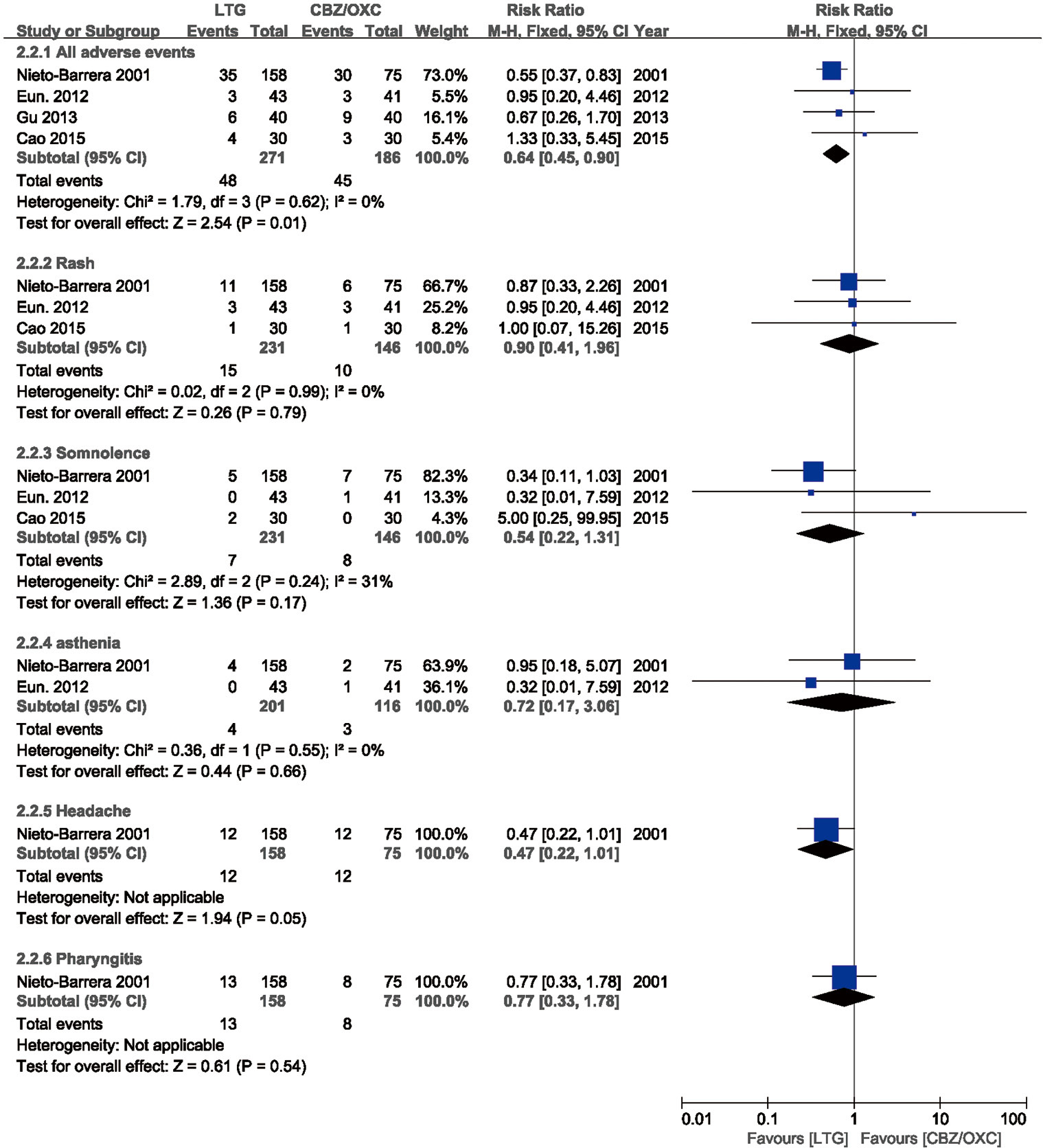 LTG vs. placebo for focal epilepsy

LTG versus CBZ or OXC for focal epilepsy

There is limited evidence available to help practitioners decide on the most effective initial drug therapy for treating focal epilepsy in children and adolescents. While LTG is often prescribed to the adult population, there is disagreement about its efficacy and tolerability in younger age group. our meta-analysis found that LTG was more effective than placebo in treating children with focal epilepsy when used as add-on therapy. however, when used as monotherapy, there was no significant difference in efficacy between LTG and CBZ/OXC. These results were generally consistent regardless of the treatment duration. The results of the subgroup analysis also suggested that there was no difference in efficacy between different treatment durations.

We used adverse effects and treatment withdrawal as indicators of tolerability. In terms of adverse events, 2 studies reported fever, infection, and rash, and no significant difference was observed. Just 1 study reported vomiting, somnolence, and dizziness, and only dizziness was reported to be more common in the LTG than in the placebo groups. We did not analyze the total incidence of adverse effects because the heterogeneity was consistently high even when applying a random effects model. This may have in part been due to the wide variation in the types of reported adverse effects among the different included studies. A significant difference between LTG and CBZ/OXC was identified in the overall adverse reactions. However, this difference was not readily apparent when analyzing the individual adverse reactions in each study, namely rash, somnolence, asthenia, headache, and pharyngitis. Thus, overall, LTG appears to be associated with fewer adverse effects than CBZ/OXC. There was not difference in treatment withdrawal between any of the groups. Overall, LTG was well tolerated by children with focal epilepsy.

Ramaratnam et al. (22) concluded from a Cochrane review that LTG was significantly more effective than placebo in reducing seizure frequency. Mohd-Tahir et al. (23) concluded that newer AEDs (including LTG) when used as adjunct therapy for the treatment of focal epilepsy in children tended to demonstrate better efficacy compared with placebo. These results are consistent with our findings. Ramaratnam et al. (22) also reported a significant correlation between ataxia, dizziness, diplopia, and nausea and LTG treatment. In our review, only 1 study reported these adverse effects, and only dizziness was significantly associated with LTG. This might have been because our sample size was too small to uncover differences in the occurrence of the other side effects.

When assessing the risk of bias, we found that some included studies did not provide information about important parameters such as the method of randomization, whether or not allocation concealment was performed, the setting surrounding the blinding process, and so on. Hopefully, subsequent clinical trials will report with reference to CONSORT (Consolidated Standards of Reporting Trials). We originally intended to conduct a subgroup analysis based on the results of the risk of bias summary, but due to the small number of included studies, it was not completed.

The most notable limitation of this review was that only 7 original studies were eligible for inclusion, some of which did not even include sufficient data. Hence, additional original studies are required in this area. Second, some RCTs were of poor quality, as evidenced by those with unclear methods of randomization. Third, 3 of the included studies were sponsored by GlaxoSmithKline, a manufacturer of LTG, which could have led to sponsorship bias.

When used as an add-on treatment, LTG shows efficacy in reducing seizure frequency in children with focal epilepsy. However, the efficacy of lamotrigine as monotherapy has not been shown to be superior to CBZ/OXC. LTG has significantly fewer adverse events than CBZ/OXC, suggesting that LTG has better tolerability.

We sincerely thank the clinical experts at the Neurography Department at the Children’s Hospital of the Capital Institute of Pediatrics for their kind help.

Funding: This work was supported by The Special Fund of the Pediatric Medical Coordinated Development Center of Beijing Hospitals Authority [no. XTCX201813]; and China Scholarship Fund [no. 201809110076].

Reporting Checklist: The authors have completed the PRISMA reporting checklist. Available at http://dx.doi.org/10.21037/tp-20-379

Conflicts of Interest: All authors have completed the ICMJE uniform disclosure form (available at http://dx.doi.org/10.21037/tp-20-379). The authors have no conflicts of interest to declare.