Myelinated retinal nerve fibers (MRNF) were firstly described by Virchow (1) in 1856. “Chalk-white spots or gray-white striated patches in shape to the distribution of retinal nerve fibers with frayed borders around the optic disk” were the main fundus characteristics (2,3). They were regarded to occur within a few months after birth or at any age (4,5). Straatsma (6) reported a prevalence of 0.98% for MRNF, where nearly 10% of these patients had symptoms of ipsilateral MRNF, anisometropic myopia and amblyopia. Tarabishy (3) defined these symptoms as a syndrome of MRNF, myopia, and amblyopia. For years, the research findings of the syndrome were mostly reported as case reports (2,7-10), and most studies focused only on the prognosis of visual acuity and the fundus appearance (11,12). The booming ophthalmic techniques in the 21st century brought about new ophthalmic instruments for clinical assessment or diagnosis. In a study involved 12 children with syndrome of MRNF, myopia, and amblyopia, Changwon Kee (12) investigated the visual prognosis for mean 2.6 years and analyzed the lesion locations, but he did not examine the developmental process of axial length (AL) or refraction. Gharai (2) measured the macular thickness in the affected children using a spectral domain optical coherence tomography (SD-OCT). However, the small number of samples limited statistical analysis on the syndrome’s effects on foveal, parafoveal and perifoveal thickness.

Overall, knowledge about the progression of AL and refraction is still limited, the efficacy of part-time occlusion therapy remains controversial, and the long-term prognosis of the syndrome remains unclear. In this retrospective study, we evaluated 10 Chinese children with syndrome of MRNF, myopia, and amblyopia for 4 years on average (ranging from 1.17 to 9.75 years) to investigate their developmental process of AL and refraction and characteristics on Fourier-domain optical coherence tomography (FD-OCT).

We present the following article in accordance with the TREND reporting checklist (available at http://dx.doi.org/10.21037/tp-20-452).

Enrolled in this retrospective self-controlled study were 10 children (4 boys and 6 girls) diagnosed with monocular MRNF, myopia, and amblyopia at outpatient clinics of Eye and ENT Hospital of Fudan University from Jan. 2004 to Aug. 2015.

The mean initial age of these children was 4.40±2.22 years (ranging from 1 to 9 years). Spectacles or rigid gas permeable (RGP) contact lenses were used for refractive correction. Part-time occlusion therapy was employed for amblyopia treatment (initially 6–8 hours per day).

The study was conducted in accordance with the Declaration of Helsinki (as revised in 2013). The study was approved by the institutional ethics board of Eye and ENT Hospital of Fudan University (No. 2013014) and informed consent was taken from all the legal guardians after a complete description of the study.

Each child received routine ophthalmic examinations on the follow-up visits. Uncooperative children were examined under hypnotic state induced by oral chloral hydrate (10%; 50 mg/kg). Cover test was applied for detecting the presence of strabismus. AL was measured 5 times for each eye with a partial coherence laser interferometry (IOL master 1322-734, Carl Zeiss Meditec AG, Jena, Germany) and mean was automatically calculated. Tropicamide phenylephrine eye drops (Santen Pharmaceutical Co., Japan) were given three times at ten-minute intervals for cycloplegia. Retinoscopy was then performed to assess the presence of refractive error. Simultaneous perception (anaglyph, red/blue glasses) and BSCDVA (manifest refraction) were evaluated except on the initial visit of 2 children and on the final visit of 1 child because of non-cooperation. Anterior segment and fundus were examined by slit lamp-microscopes and direct ophthalmoscopy. Additionally, a non-mydriatic retinal camera (TRC-NW300, Topcon Co., Japan), a Fourier-domain optical coherence tomography (FD-OCT, RTVue100-2, Optovue Inc., USA) and an auto keratometry (ARK-700A, NIDEK Co., Ltd, Japan) were used on the final visit to detect the lesion areas, assess the macular thickness (MM6 map program) and evaluate the corneal curvature.

All the participants were unilaterally affected (7 left eyes and 3 right eyes). Each eye underwent fundus photography (Figure 1). Mean follow-up period was 4.00±2.40 years (ranged from 1.17 to 9.75 years). No one dropped out of the study. The characteristics and outcomes are detailed in Table 1. 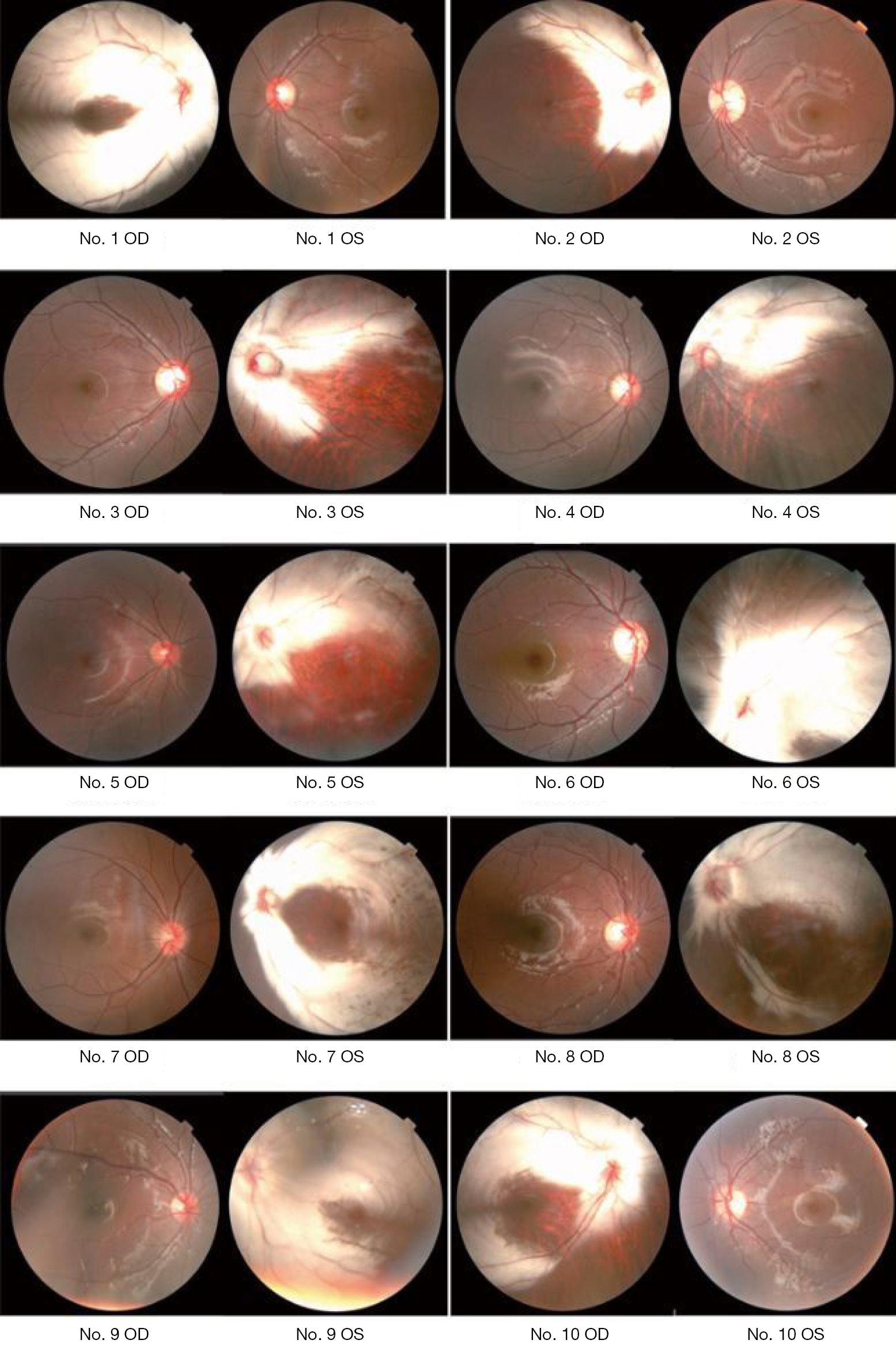 Figure 1 The color fundus photographs on the last visit. All the children were unilaterally affected (7 left eyes and 3 right eyes). 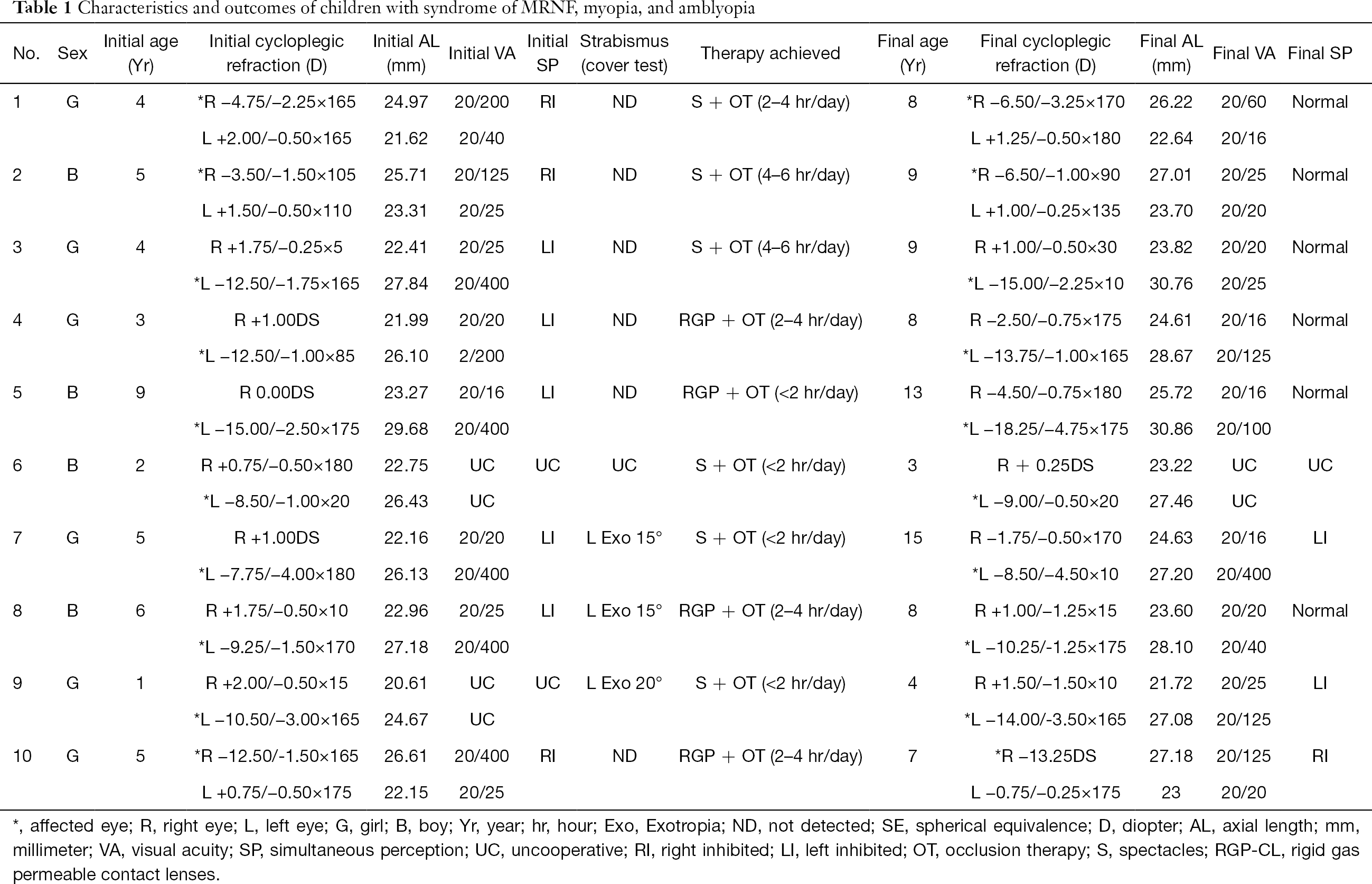 Table 1 Characteristics and outcomes of children with syndrome of MRNF, myopia, and amblyopia
Full table

Initially, three children have strabismus. All the affected eyes had a BSCDVA of less than 20/200 and were all inhibited (N=8), of which two had a final BSCDVA of 20/25, four of 20/60 or better, eight of more than 20/200 and one of less than 20/200. Nine fellow eyes had a final BSCDVA of 20/25 or better. Simultaneous perception turned normal in six children (Table 1). Strabismus remained steady in the initial 3 children with exotropia and no strabismus was detected in the remaining 7 children during the follow-ups. 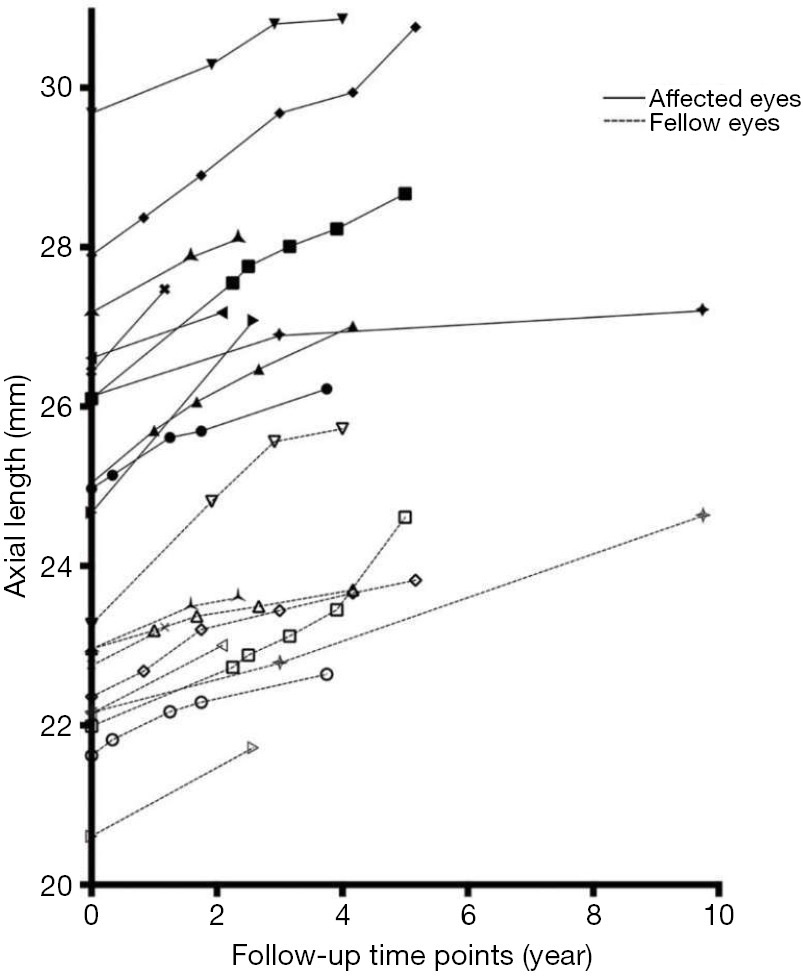 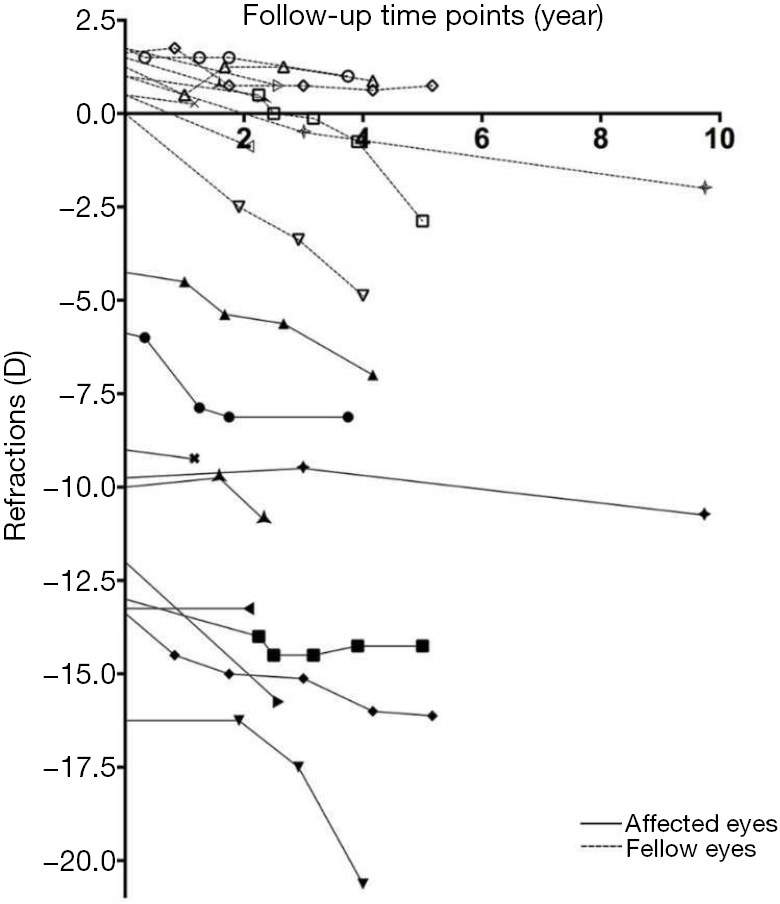 All the children underwent FD-OCT (MM6 map program) examination. The macular thicknesses of the treatment group and the control group are shown in Table 2. The MM6 map program revealed an increase in full retinal thickness of the affected area (Figure 4), highly consistent with the gray-white lesion area captured by the retinal camera (Figure 5). Paired-t tests showed that there were no significant differences in the mean values of foveal thickness (n=10, t=1.455, P=0.180) and parafoveal thickness (n=10, t=−1.657, P=0.132) between the two groups. In contrast, the mean value of perifoveal thickness of the treatment eyes was higher than that of the control eyes (n=10, t=2.296, P=0.047) (Figure 6). 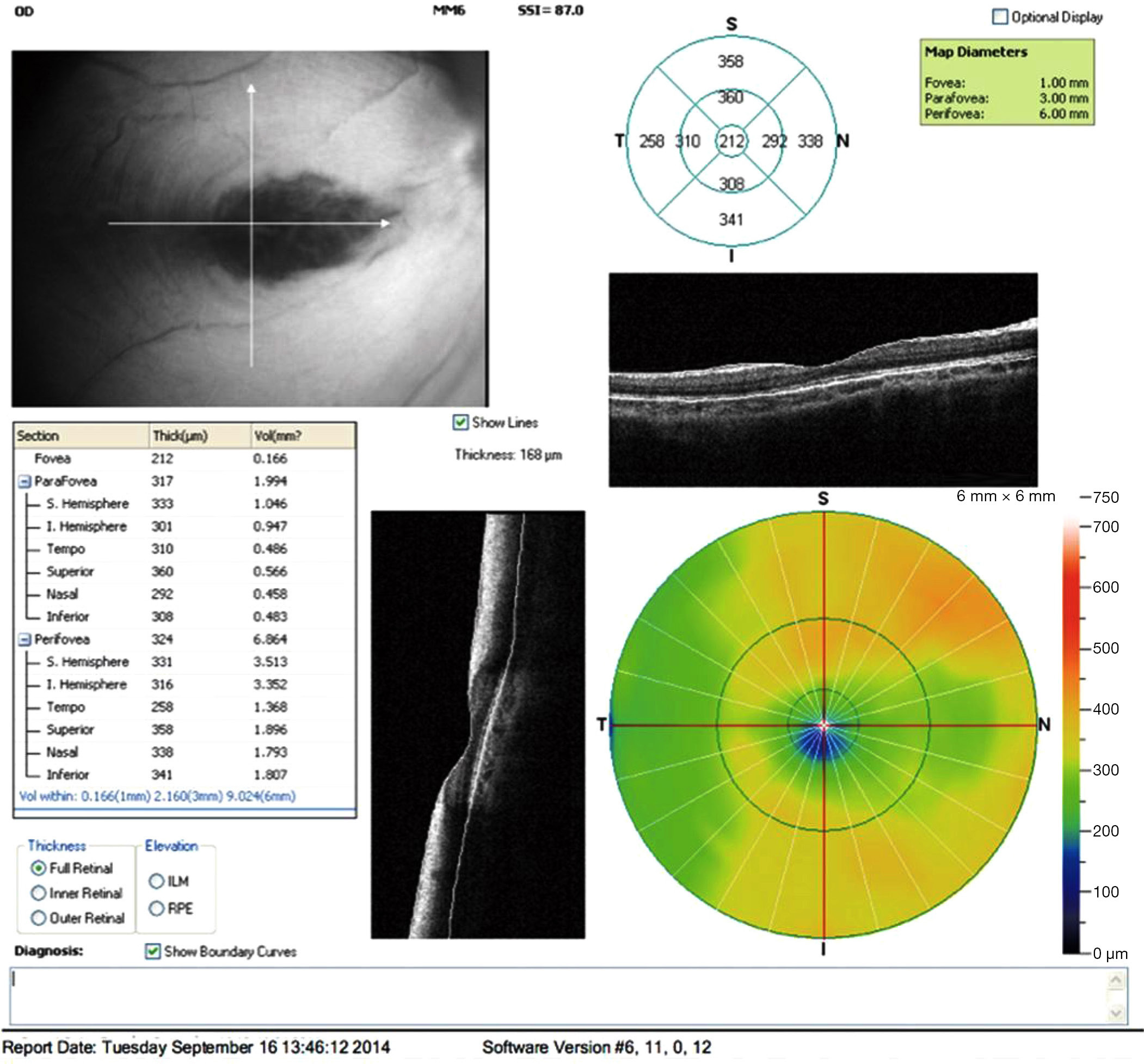 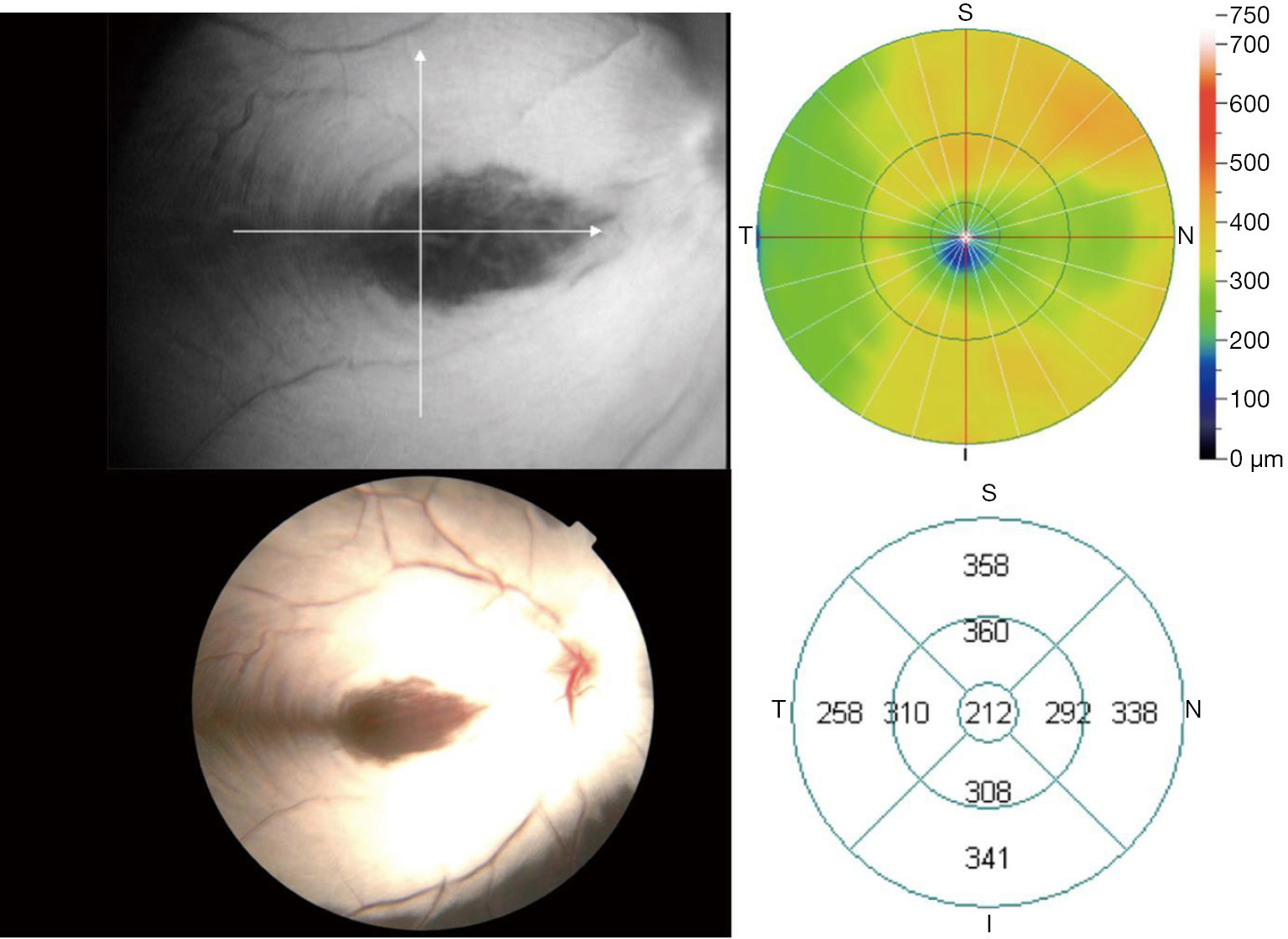 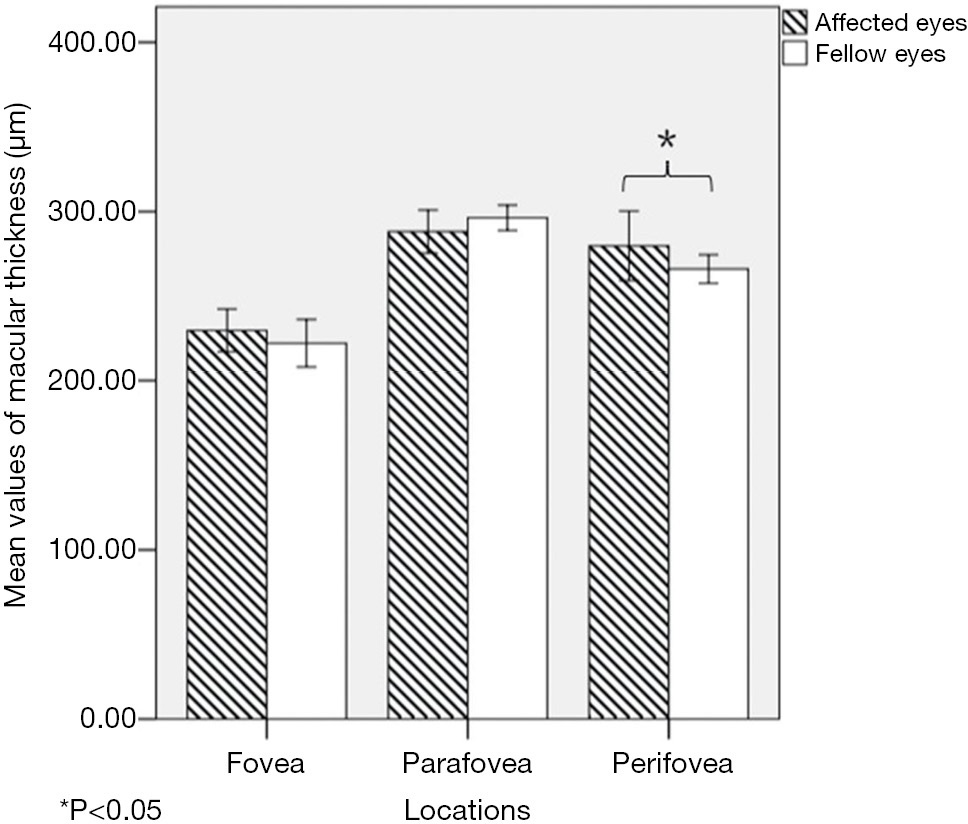 The simple evaluation method or sample size limited further investigation in the previous studies of as the syndrome of MRNF, myopia, and amblyopia (2,13). The long-term developmental processes of AL and refraction among children with the syndrome have not been fully known, yet. In the present study, both IOL Master and FD-OCT were used for clinical evaluation. IOL Master provides great accuracy (0.01 millimeter) and repeatability when it is used for axial evaluation (14). FD-OCT has an excellent axial resolution of 5 µm (15). The MM6 program automatically measures the foveal, parafoveal and perifoveal thicknesses, making it possible to compare the retinal thicknesses among the three different locations. We continuously observed the changes in AL, SE, AMR-AE and AMR-MS of these patients for a mean of 4 years, compared the differences in various ocular parameters between the affected eyes and the fellow eyes, and analyzed the potential relations between these parameters.

Despite remarkable increase in the mean values of AL and SE in both groups, no statistical differences were observed in the mean values of AL and SE within time*group interaction effect, indicating time factor and group factor affect AL and SE independently. Moreover, the differences in AMR-AE and AMR-MS between the two groups were not significant. This is an interesting finding as it implies that the affected eyes and the fellow eyes have similar developmental processes in AL and SE. It also suggests that refractive error correction and part-time occlusion therapy have little effect on axial elongation and myopic shift; therefore, occlusion therapy might be a safe treatment for the children with the syndrome. Changwon Kee (12) claimed that among these children, the more myopic ones tended to have poorer outcome of BCDVA. Lee and his colleagues (11) thought that macular pathology, such as macular pucker, macular pigment dispersion, and an abnormal macular reflex, might result in poor visual outcomes among patients with the syndrome. In this study, we did not find any correlation between BCDVA and SE, but the visual outcome was significantly correlated with the occlusion dose. Possible explanations might be that the maculas of all the affected eyes were not affected, as they were all morphologically normal under the retinal camera, FD-OCT and ophthalmoscopy. In addition, correcting myopia by using RGP lenses might gain more lines in BCDVA than by using spectacles. Moreover, the compliance with treatment might also affect the visual prognosis.

So far, it is known that axial myopia can be caused by form deprivation or retinal defocus (16-18). In the present study, a one-year-old child was especially worth mentioning because we noticed that, at such a young age, he presented anisometropia of more than 13D and an inequality of 4 mm in ALs between his two eyes. If his anisometropia occurred acquiredly, the axial elongation and myopic shift of the affected eye should be in a ridiculously higher rate than those of the fellow one. Therefore, it is reasonable to hypothesize that his anisometropia might exist congenitally, which implies that some unknown factors or pathways may trigger the unilateral myopia in those children.

In this study, the perifoveal retinas of the affected eyes were significantly thicker than those of the control ones. However, no significant difference was observed in the mean values of foveal thickness or parafoveal thickness between the affected eyes and the fellow eyes. Additionally, the raised perifoveal area shown on the MM6 map program was highly consistent with the gray-white lesion area (MRNF) captured by the retinal camera. As it has been reported that amblyopes always show increased macular thickness (19), our results indicated that the fovea might not be affected by MRNF. This may be another possible reason why the BCDVA of the most cases could be significantly improved on the last visit. On the contrary, Gharai (2) reported that the lesion area was much thinner than the normal one, but he thought that the reduction of macular thickness is due to the artifact of optical shadowing from the myelinated nerve fiber layer.

Our study is limited in several ways. First, the sample size is relatively small because of the low prevalence, but it is big enough as our main aim was to investigate the differences in the development of AL and refractive error between the affected eyes and the fellow eyes rather than between the affected children and the normal ones. Moreover, the self-controlled design has minimized the selection bias. Second, we did not know whether the lesion areas were progressive or static due to the unavailability of the values of initial macular thickness and the initial lesion areas of the affected eyes since the FD-OCT was not performed and fundus photography was not commonly employed 10 years ago. Third, the data of initial corneal curvature, visual acuity and simultaneous perception of the uncooperative children were incomplete.

In summary, the affected eyes and the fellow eyes presented similar developmental processes in AL and refraction. Part-time occlusion therapy may have no effect on axial elongation or myopic shift but may produce positive effect on visual improvement.

Reporting Checklist: The authors have completed the TREND reporting checklist. Available at http://dx.doi.org/10.21037/tp-20-452

Conflicts of Interest: All authors have completed the ICMJE uniform disclosure form (available at http://dx.doi.org/10.21037/tp-20-452). The authors have no conflicts of interest to declare.

Ethical Statement: The authors are accountable for all aspects of the work in ensuring that questions related to the accuracy or integrity of any part of the work are appropriately investigated and resolved. The study was conducted in accordance with the Declaration of Helsinki (as revised in 2013). The study was approved by the institutional ethics board of Eye and ENT Hospital of Fudan University (No. 2013014) and informed consent was taken from all the legal guardians after a complete description of the study.