Approximately 450 million people worldwide are diagnosed with pneumonia every year, and 4 million die of the disease (1,2). There are 156 million children diagnosed with pneumonia worldwide yearly, 151 million of whom live in developing countries such as China. Outcomes of pneumonia are determined by factors such as age, familial economic status, nutritional status, immune status, types of pathogenic viruses, and co-infection with bacterial pathogens (3,4). Bronchitis obliterans is a rare and severe chronic childhood lung disease caused by several types of lower respiratory tract injury. Bronchitis obliterans is different from bronchiolitis obliterans in that the latter is a clinically distinct disease involving smaller airways that cannot be seen on bronchoscopy (5). Obstructive bronchitis describes inflammatory responses to various stimuli that give rise to narrowing of large and small airways (6); membranous tissue forms within the lumen of the segmental and subsegmental bronchi, and these membranes are visualized using flexible bronchoscopy.

The etiologies of bronchitis obliterans are unclear. Initially, it was considered a congenital disease only; later reports described it as a condition where irritation of the airways resulted from chronic inflammation (7). In pneumoconiosis, some authors reported obliterative central bronchitis as a result of long-term inhalation of mineral dust, including severe stenosis and large lobar or segmental bronchial occlusion (8,9). Others reported that bronchitis obliterans was related to chronic inflammatory conditions—chronic suppurative lung disease or cystic fibrosis (6,10). A number of bacteria and viruses, including Mycobacterium tuberculosis (11), Mycoplasma (12), Chlamydia (13), influenza A (14), and severe infection [e.g., Staphylococcus aureus (15), Mycobacterium avium intracellulare (6)] have been associated with severe lung injury leading to bronchitis obliterans. In reviews of the literature, the treatment of bronchitis obliterans evolved from active intervention for transcatheter rupture or transthoracic intervention (6) to no intervention at all (16).

We present the following article in accordance with the TRIPOD reporting checklist (available at http://dx.doi.org/10.21037/tp-20-272).

According to the WHO guidelines for severe pneumonia in children, the diagnostic criteria for severe pneumonia were based on symptoms and signs, as well as on radiological and laboratory investigations (17). The diagnosis of bronchitis obliterans was based on bronchoscopic examination (10). When the general condition of the patient was stable, flexible bronchoscopy was performed under general inhaled anesthesia by the same respiratory pediatrician. The bronchoscope entered the airway through a port in the mask connector. After light aspiration, the anatomical site and lesion type were recorded. Normal saline at 37 °C was injected rapidly through the operation channel to assess airway obliteration or closure. When the airway opening was absent or significantly reduced, the bronchus was considered to be obliterative-like. Bronchoscopic airway lavage fluid (BALF) was collected by injecting 37 °C normal saline through the bronchoscope working passage, and then back through the suction apparatus with a negative pressure of 100–200 mmHg. The selected negative pressure value was appropriate to ensure that the lumen did not collapse during suction). The re-absorption rate of lavage fluid was at least 40%. Collected specimens were routinely cultured, and cell sorting and counting were performed simultaneously.

Written informed consent was obtained from each set of parents prior to bronchoscopy. The study was conducted in accordance with the Declaration of Helsinki (as revised in 2013) and was approved by the institutional ethics committee of Shanghai Children’s Hospital (No. 2020R164-E01).

Once the diagnosis of severe pneumonia was verified, serum and sputum or BALF specimens were collected. Gram staining, serum and sputum or BALF culture were carried out to identify the bacterial strains (Streptococcus pneumoniae, Streptococcus viridans, Klebsiella pneumoniae, Haemophilus influenzae, and Moraxella catarrhalis). The diagnostic criteria for Mycoplasma pneumoniae pneumonia were as follows: serum or BAL IgM antibody >1:160, or single IgM antibody positive. According to standard procedures, if the virus antigen or multiplex PCR was positive, the diagnosis of viral infection was established.

To test the clinical usefulness of the nomogram, by quantifying the net benefits under various threshold probabilities, decision curve analysis (DCA) was used to draw the decision curves, and this along with the clinical impact curve were used to assess the calibration of the nomogram (19). Receiver operating characteristic (ROC) curves were generated to assess the values of various models that might help distinguish bronchitis obliterans from severe pneumonia. The true positive rate (TPR) and false positive rate (FPR) were also calculated at various threshold probabilities. The corrected number of positive patients using the nomogram and the number of actual positive patients were calculated using bootstrapping validation (1,000 bootstrap resamples).

Clinical characteristics of patients with and without bronchitis obliterans

After application of the LASSO logistic regression analysis, four of the 39 clinical candidate parameters were used to develop the nomogram (Figure 1). The results of the univariate and multivariate analyses are displayed in Table 1. Multivariate analyses demonstrated that adenoviral infection, length of symptoms, the percentage of macrophages in BALF, and mucosal abnormalities (including bronchial mucosa hyperemia, swelling, erosion, and mucosal shedding) were independent clinical characteristics of bronchitis obliterans. A model containing these four independent clinical characteristics was constructed and visualized using a nomogram (Figure 2). 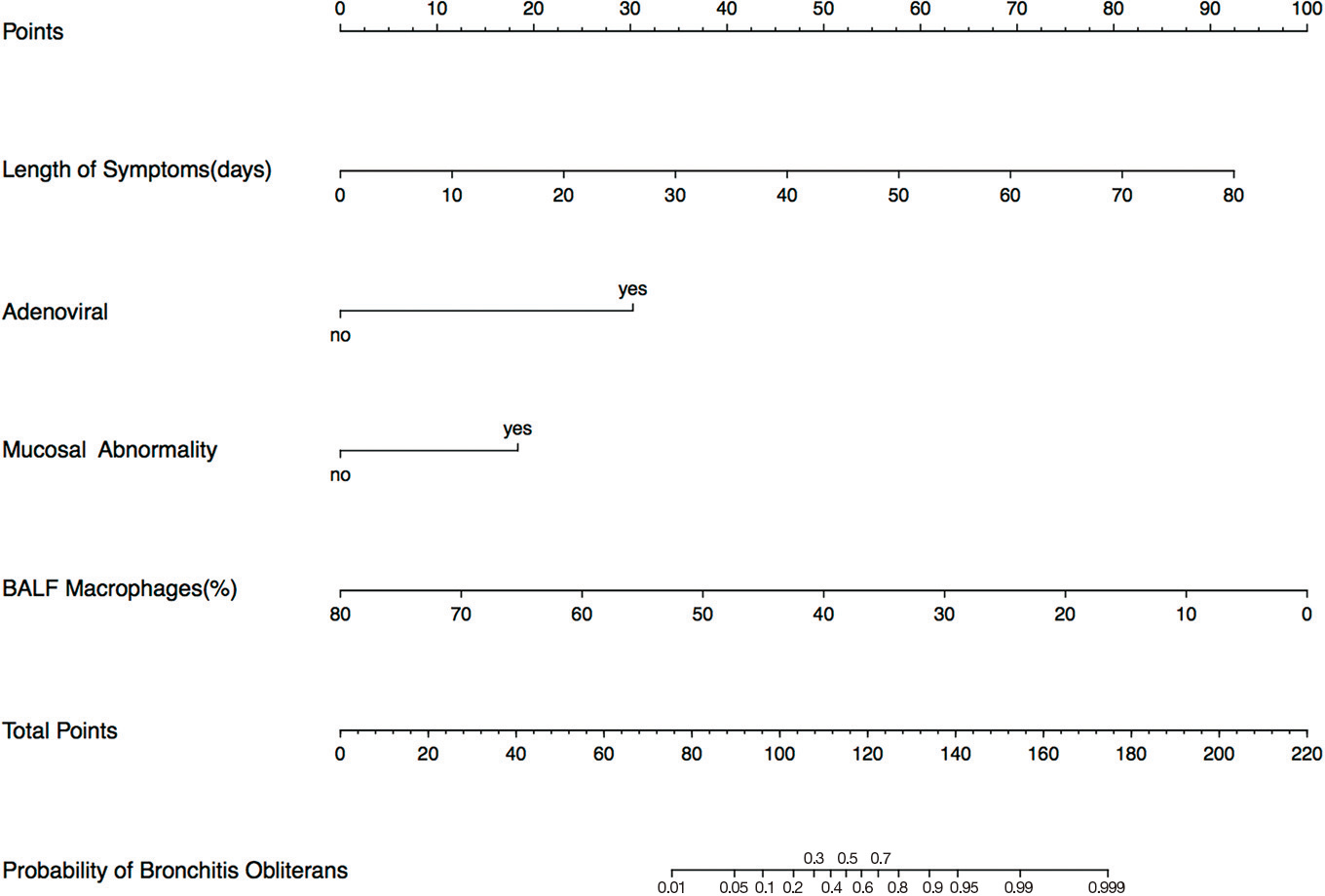 Figure 2 Nomograms to predict the risk of bronchitis obliterans.

Validation of the nomogram

Internal bootstrapping validation was used to evaluate the performance of the nomogram. The C-index of the constructed nomogram was 0.91 (95% CI, 0.878 to 0.942), and the Akaike information criterion (AIC) was 66.484. The calibration curve showed that the deviation was very slight, and there was good agreement between the diagnostic probability and the actual probability (Figure 3). The Hosmer-Lemeshow test demonstrated no statistical significance (Chi-square =0.798, P=0.5443), demonstrating that there was no departure from perfect fit. 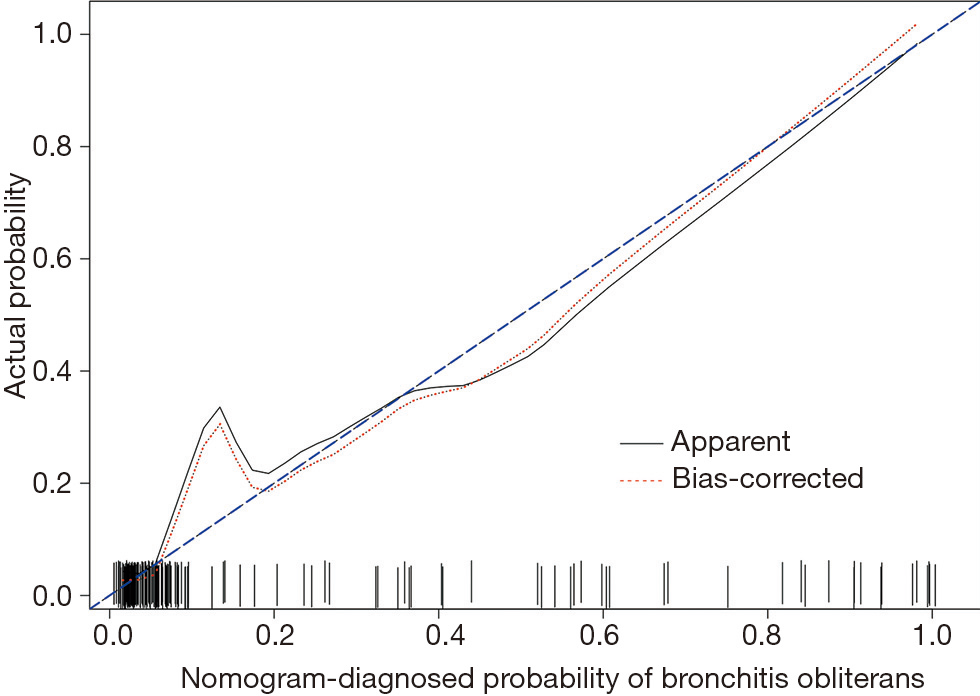 Figure 3 The calibration curve of the nomogram for diagnosis of bronchitis obliterans. 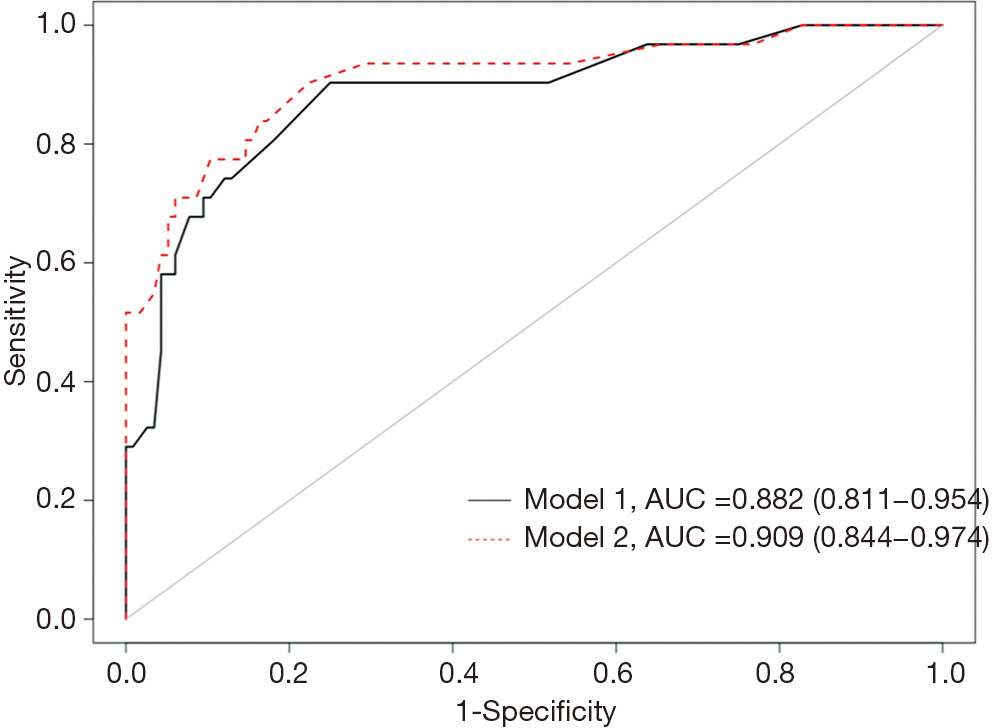 DCA was used to evaluate the quality of the two models. The decision curves of the model with bronchoscopy (nomogram) and the model without bronchoscopy are shown in Figure 5. The decision curves implied that if the threshold probability of a patient is >7%, using the nomogram to diagnose bronchitis obliterans was more beneficial than using either treat-all-patients or treat-none schemes. 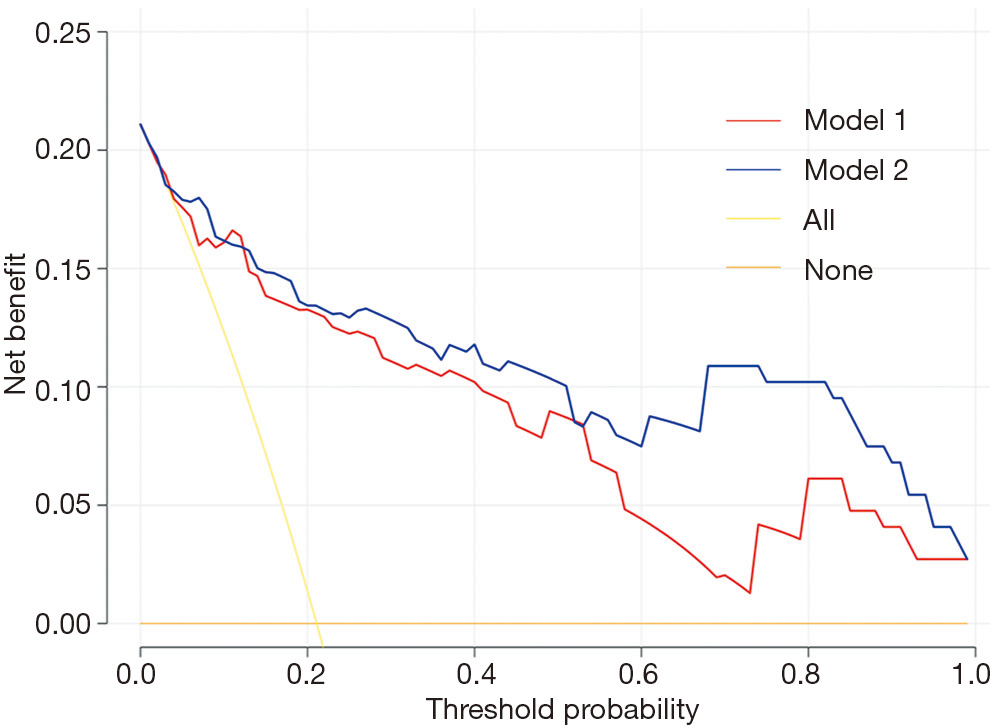 Clinical impact curves demonstrated that there was a good consistency between the number of diagnosed positive patients on the nomogram and the actual number of positive patients (Figure 6A). TPR and FPR suggested that diagnosis of bronchitis obliterans at various threshold probabilities was adequate (Figure 6B). 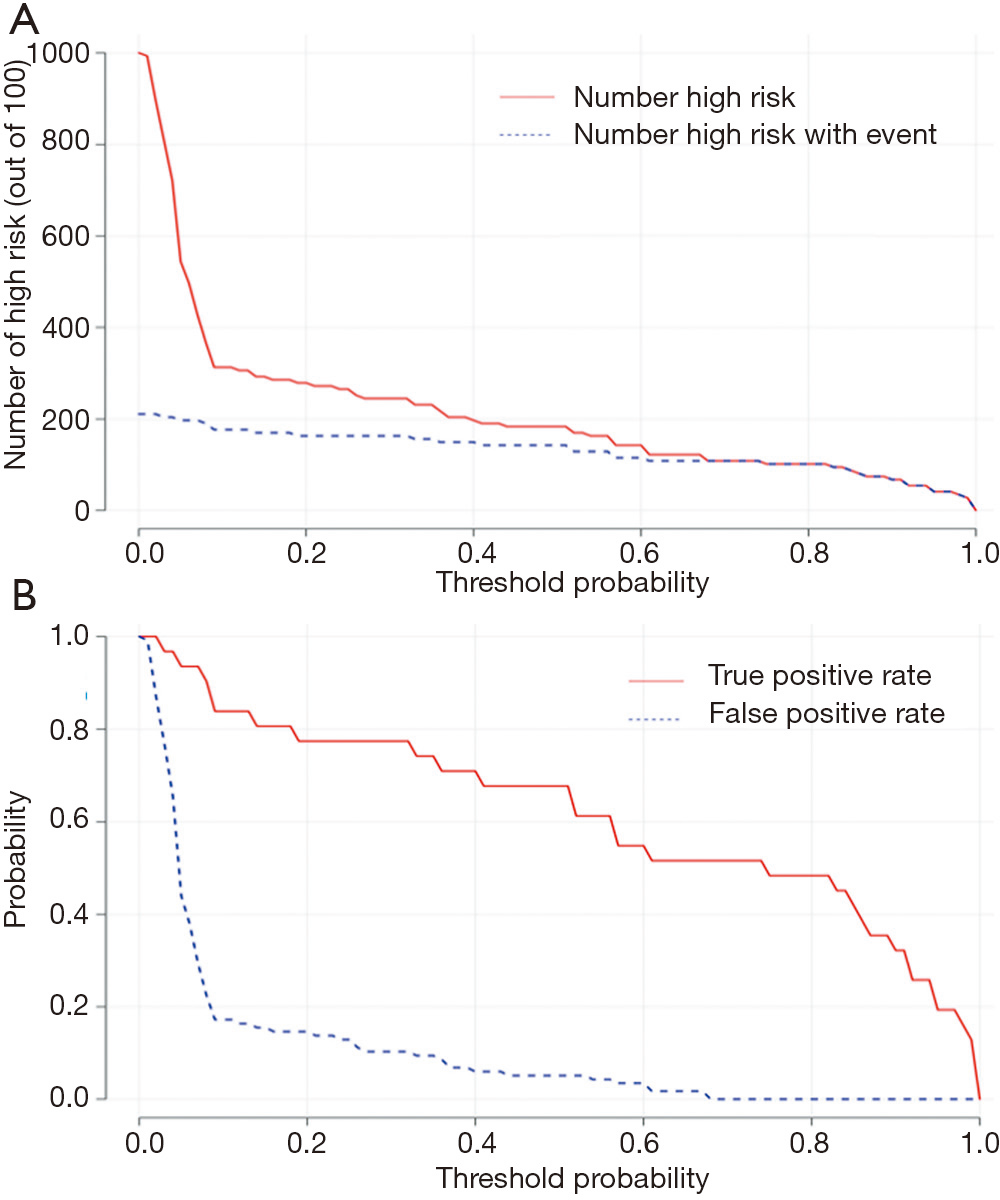 We developed and internally validated an effective nomogram using clinical characteristics for early diagnosis of bronchitis obliterans in children with severe pneumonia. Adenoviral infection, length of symptoms, the percentage of macrophages in BALF, and mucosal abnormalities were incorporated in the nomogram to identify bronchitis obliterans using a database from our hospital. The constructed nomogram provided a new, easy-to-use, tool for diagnosing bronchitis obliterans. Internal validation revealed that the nomogram showed good discrimination and calibration power. The C-index of the constructed nomogram was 0.91 (95% CI, 0.878 to 0.942), suggesting that the nomogram could be used for large sample sizes, and could be widely and accurately used clinically.

We defined bronchial mucosal abnormality as bronchial mucosa hyperemia, swelling, erosion, or mucosal shedding. In our study, 17 of 31 patients with bronchitis obliterans had bronchial mucosal abnormalities on bronchoscopy. Several authors proposed that inflammation results in granulation tissue formation, protrusion of small polyp-like structures, and continued inward growth of granulation tissue resulting in obstruction; these findings are based on histologic findings of granulation tissue with occasional inflammatory cells; subsequently, these affected airways became totally occluded by membranes (6,16). Multiple fiberoptic examinations revealed that membranous tissue formed in all 31 children with bronchitis obliterans.

We compared the performance of two diagnosis models. Model 1 involved only clinical parameters, and model 2 involved clinical parameters with the addition of bronchoscopy. Compared with the two models, the NRI was 0.2022 (95% CI, 0.008 to 0.3968; P=0.042) and the IDI was 0.0975 (95% CI, 0.026 to 0.169; P=0.007). The accuracy of model 2 was increased by 9.75%. All patients with bronchitis obliterans were followed up for 1–3 years with high resolution computed tomography of the chest. We found that 23 of 31 children with bronchitis obliterans had inner bronchial diameters that were larger than those of adjacent (normal) bronchi (ratio >1).

There are some limitations in this study. First, the data were only based on a single hospital in Shanghai. Our results reflected the characteristics of children in this area; therefore, external validation of findings would be desirable. Second, this was a retrospective study, and this too may introduce bias. Third, due the ages of the children, patients with bronchitis obliterans could not perform pulmonary function testing. Some patients lacked pathological diagnosis due to the risk of biopsy in symptomatic patients or the unwillingness of their parents. Specific serotypes, genotypes, and molecular epidemiology of adenoviruses were not examined. Further prospective studies and external validation are needed to validate our model in other patients with bronchitis obliterans.

We constructed a nomogram on the basis of clinical characteristics to diagnose bronchitis obliterans. The nomogram can help clinicians to make early diagnoses in children in whom membranous tissue has not yet formed.

We acknowledge all patients and their parents involved in the study, and Dr. Quan Lu for his review of the manuscript.

Reporting Checklist: The authors have completed the TRIPOD reporting checklist. Available at http://dx.doi.org/10.21037/tp-20-272

Conflicts of Interest: All authors have completed the ICMJE uniform disclosure form (available at http://dx.doi.org/10.21037/tp-20-272). The authors have no conflicts of interest to declare.

Ethical Statement: The authors are accountable for all aspects of the work in ensuring that questions related to the accuracy or integrity of any part of the work are appropriately investigated and resolved. The study was conducted in accordance with the Declaration of Helsinki (as revised in 2013). The study was approved by the institutional ethics committee of Shanghai Children’s Hospital (No. 2020R164-E01) and individual consent for this retrospective analysis was waived.