Changes in the age-specific body mass index distribution among urban children between 2002 and 2018 in Changsha, China

Together with socioeconomic development and transformation of lifestyle, the childhood obesity epidemic in different part of this world has changed over time (1-4). Although the childhood obesity rate has plateaued in some developed countries, it is increasing in rapidly developing countries, such as China (5,6). The prevalence of overweight and obesity among school-aged children in China has increased from 5.3% in 1995 to 20.5% in 2014 (7).

Understanding how the BMI distribution changes over time can allow identification of subpopulations susceptible to overweight and obesity, enabling the development of tailored interventions (8,9). Studies had investigated the changes in the shape and location of BMI distributions over the last decades in several developed countries, and found the most pronounced elevations in BMI have occurred in the upper part of the BMI spectrum (>75th percentiles), whereas little or no changes have occurred below the 50th percentile (10-14). These studies concluded that the increases in the mean BMI and prevalence of overweight and obesity in children have resulted mainly from the pronounced change in the upper end of the BMI spectrum, suggesting that the factors leading to BMI changes were changed in only a subgroup of the school-aged population (10-12).

We chose the Yuhua District of Changsha City as the study site. Changsha is a second-tier city located in central south China. The lifestyle in Changsha has changed dramatically over the past two decades as a result of rapid socioeconomic development. Yuhua District is one of six districts of Changsha City, and it covers 292 square kilometers. The gross domestic product of Yuhua District increased from ¥2,425 million in 2002 to ¥188,816 million in 2018. We investigated the prevalence of underweight, overweight, and obesity among children aged 6–15 years in Yuhua District in 2002 and 2018. The distribution of BMI was examined as the BMI values at 5th, 50th, 85th, and 95th percentiles. And the changes of BMI percentiles over time were calculated according to age and sex.

We present the following article in accordance with the STROBE reporting checklist (available at http://dx.doi.org/10.21037/tp-20-305).

This study was a secondary data analysis of the 2002 and 2018 Annual Survey on Students’ Constitution and Health from Yuhua District, Changsha City, China. The survey was sponsored by the Education Bureau of Changsha City. The participants were primary or middle school students. A random cluster sampling method was used to select schools from Yuhua District. All students at the selected schools underwent standard physical examinations. Children aged less than 6 years or more than 15 years from the dataset were excluded from the analysis. In China, school-aged children must complete nine years of compulsory education in primary (6 years) and middle (3 years) school, starting primary school at 6 to 7 years of age. Therefore, surveys in primary and middle schools take into account the majority (>98%) of children 6–15 years of age in the study region.

The authors are accountable for all aspects of the work in ensuring that questions related to the accuracy or integrity of any part of the work are appropriately investigated and resolved. The study protocol was reviewed and approved by the Medical Ethics Committee of the Hunan Children’s Hospital (HCHLL-2019-41). The study was conducted in accordance with the Declaration of Helsinki (as revised in 2013). Informed consent was waived because this was a retrospective study, and the authors had no access to information that could identify individual participants during and after data collection.

Age (years), sex, height, and weight were collected from the Annual Survey on Students’ Constitution and Health dataset. Height and weight were measured by a team of health professionals, following the Handbook of National Student Constitution and Health Survey. BMI was calculated as weight in kilograms divided by the square of height in meters. The weight status of children was defined according to BMI percentile based on growth charts for Chinese children and adolescents aged 0–18 years (16). The growth charts provide age and sex-specific BMI cutoff values for underweight (BMI <5th percentile), healthy weight (BMI 5th–<85th percentile), overweight (BMI 85th–<95th percentile), and obese (BMI ≥95th percentile) (16,17).

Crude rates and 95% confidence intervals (CIs) for each weight status were calculated by sex and survey year. Standardized rates for each weight status were estimated using the sum of the 2002 and 2018 populations as the standard population and were adjusted by age and sex. All hypothesis tests were two tailed with the type 1 error rate fixed at 5%. Percentiles (5th, 50th, 85th, and 95th) were used to examine the distribution of BMI. The differences on the BMI value at 5th, 50th, 85th, and 95th percentiles between 2002 and 2018 were calculated according to age and sex, and the difference in percent were also calculated. Missing data were not imputed. Statistical analysis was conducted using SAS version 9.3 software (SAS Institute, Cary, NC, USA).

Because yearly data from 2002 to 2018 were not available, we used data from two years (2002 and 2018). To assess the effect of the study year (selection bias) on the results, sensitivity analyses were conducted using data from the 2003 and 2017 Annual Survey on Students’ Constitution and Health. As data for children aged 6 and 15 years were not available in the 2003 dataset, the sensitivity analyses were performed in children aged 7–14 years. The standardized rates of the weight status; the age and sex-specific prevalence of underweight, overweight and obesity; and the BMI at 5th, 50th, 85th, and 95th percentile by age and sex in 2003 and 2017 were calculated.

The sample sizes of the two surveys are shown in Table 1. In 2002 and 2018, 26,644 and 45,417 children 6–15 years of age, respectively, participated in the health survey. All participants had complete records for age, sex, height, and weight; therefore, no participants were excluded because of missing data. 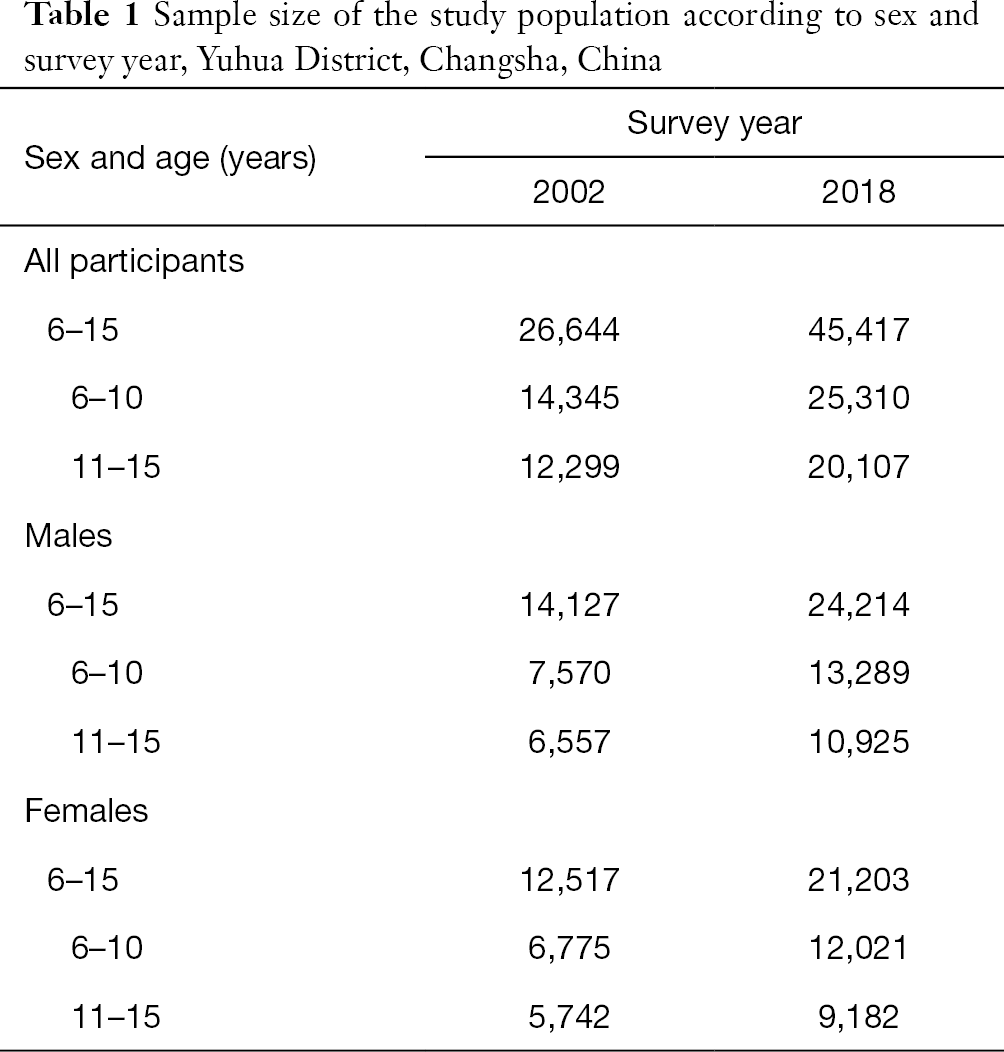 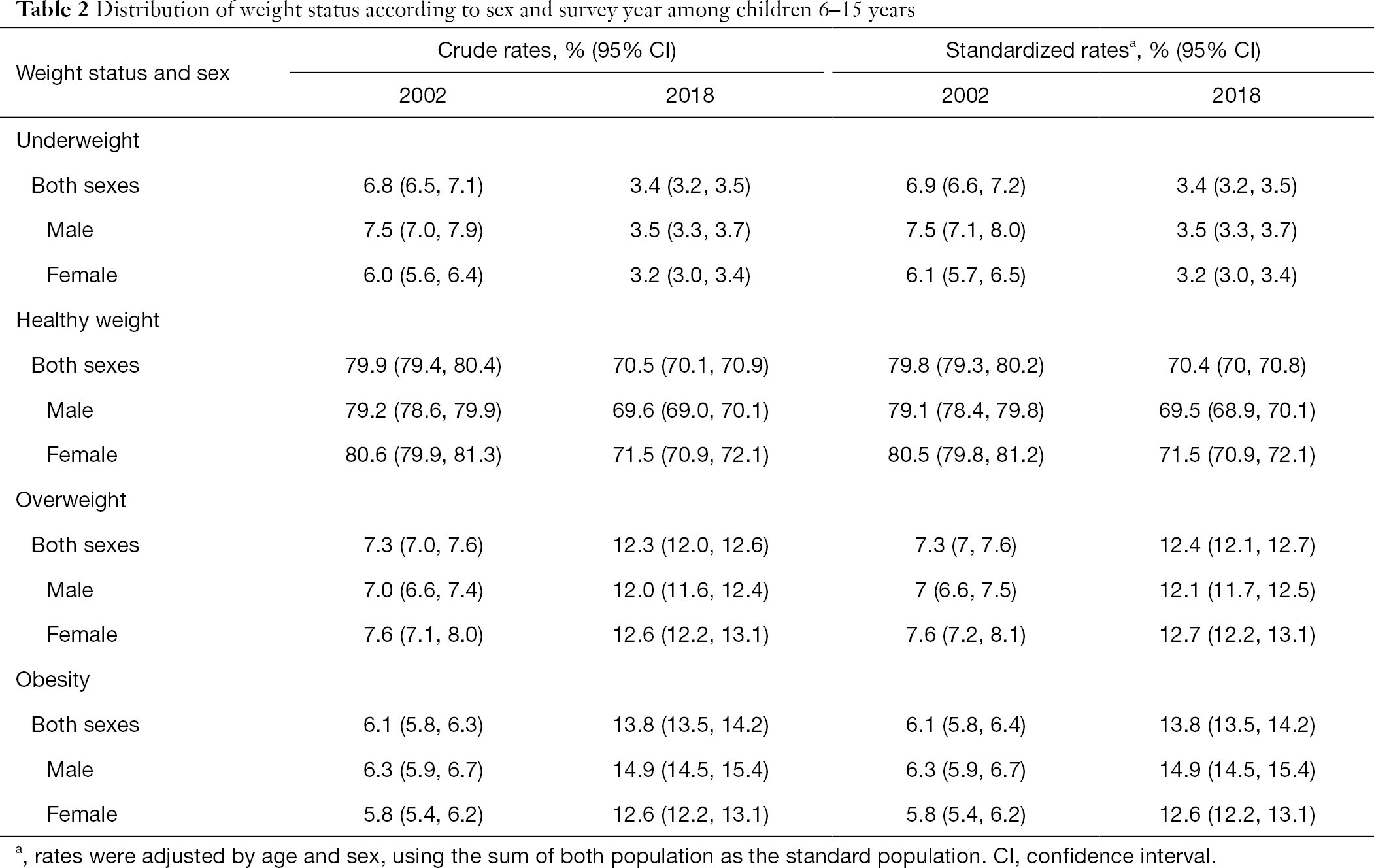 Figure 1 Age and sex-specific prevalence of underweight, overweight, and obesity among children in 2002 and 2018, Yuhua District, Changsha, China.

Figure 2 shows the BMI values at 5th, 50th, 85th, and 95th percentile according to age, sex, and survey year. The BMI distributions were more skewed to the right in 2018 than in 2002. From 2002 to 2018, increases in the values of BMI at all percentiles were observed for both sexes. The differences between two survey years were greater at 85th and 95th than at the 5th and 50th percentiles. Marked differences in BMI value occurred at a younger age in the 50th percentile compared with the 5th percentile. 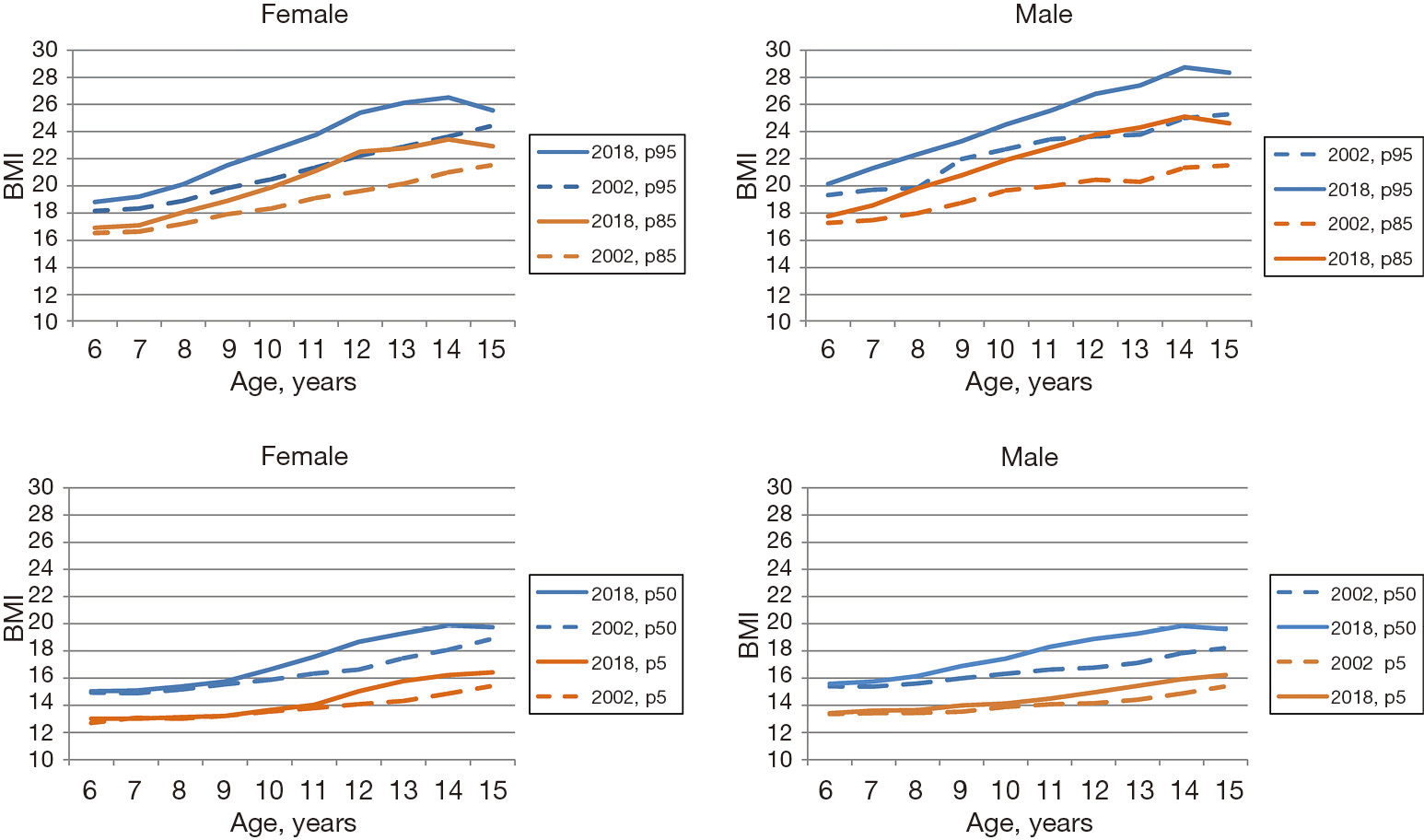 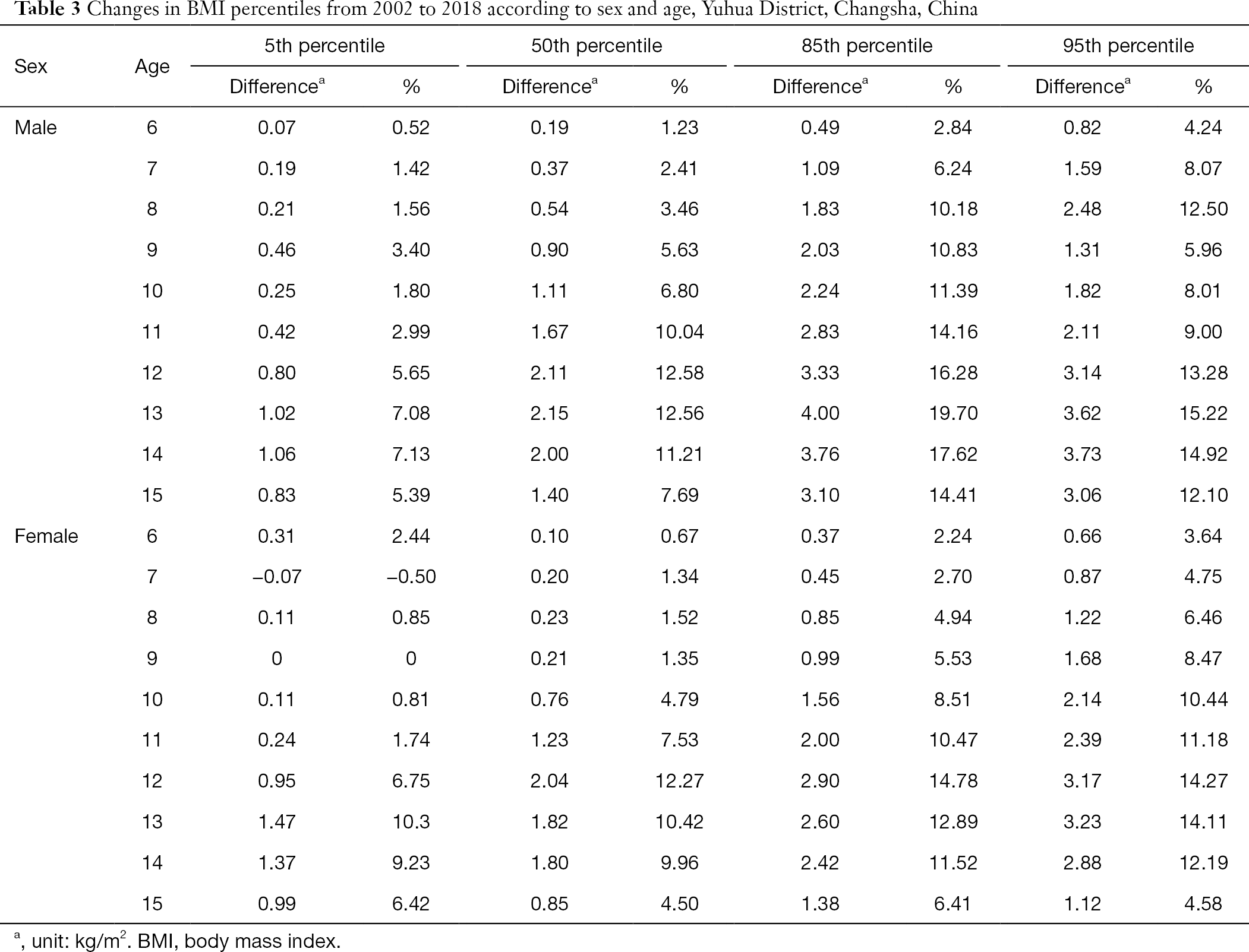 Table 3 Changes in BMI percentiles from 2002 to 2018 according to sex and age, Yuhua District, Changsha, China
Full table

The prevalence of underweight decreased from 6.8% in 2002 to 3.4% in 2018 among children 11–15 years of age, and that obesity increased from 6.1% to 13.8%. The BMI of the entire population increased over the 16-year study period in both sexes, and the greatest change was seen in the 85th percentile, with moderate changes seen in the 5th and 50th percentiles. As for the age specific changes of BMI distribution, the greatest changes occurred at the 12–14 years of age.

Comparing the age specific BMI distributions over time can pinpoint the ages at which BMI is sensitive to change, allowing identification of the susceptible age groups to launch interventions. In this study, the changes of BMI in percentiles increased with age in both sexes. Similar patterns had been observed in the 95th percentile among children in the United States, 1988–1994 through 2013–2014 (13). Whether this is because the BMI of older children are more sensitive to lifestyle changes or a result of a cumulative effect of lifestyle changes on weight status is unclear. However, our data suggest the need for interventions to prior to 12 years of age.

Studies in several developed countries showed that the increases in mean BMI and prevalence of obesity were caused by an increase of BMI among children who were in the upper BMI percentiles (10-14). For example, Kurokawa et al. analyzed the trends of BMI distribution in Japanese children from 1989 to 2003, and found little or no change in the 10th and 25th percentiles. However, the increases in the 75th and 90th percentiles were more marked than that in the 50th percentile among primary school children (11). The authors speculated that a subgroup of the population (in the upper percentiles of BMI) is more susceptible to factors that increase the risk of overweight and obesity (11). However, we found a shift in the BMI distribution in the entire population, although the increases in the upper percentiles were more marked than those in the lower percentiles. Unlike in developed countries, the BMI shift in this study indicated that the factors that contributing to the increased BMI influenced the entire population. This finding emphasizes the need for studies on the short- and long-term effect of increasing BMI on population health.

The rapid socioeconomic development in China over the past two decades has led to a dramatic change in lifestyle, resulting in an obesity epidemic (22,23). This change is now affecting the health of the younger generation (7,22). The increase in BMI among children of all ages and in all BMI percentiles was unsurprising and indicates the need for actions to prevent adverse consequences. The health consequence of the shift in BMI distribution should be investigated, and interventions are needed to slow the increasing obesity prevalence and prevent related adverse health effects.

This study had several limitations. First, BMI was used to evaluate overweigh and obesity. Although BMI is an imperfect measure of body fat and adiposity (24,25), it is the most feasible and widely used measurement in public health surveillance (1,7,17,26,27). The weight status of children and teenagers is defined according to BMI percentiles for age and sex. As shown in this study, the BMI distribution is changing, meaning that BMI percentile values are not fixed. To make the distribution of weight status comparable between 2002 and 2018, fixed cutoff points to define weight status are needed (26). Therefore, we used the cutoffs from the growth charts delivered in 2009 (16), which are still in use in China in 2020. Second, as a retrospective study, we analyzed available data only and thus could not evaluate factors associated with the BMI change. Also, as a cross-sectional study, we could not analyze the BMI trajectory. Predicting age-specific trends in BMI shifting and developing targeted interventions will require identification of the associated factors and their effect sizes. Therefore, a further longitudinal study is needed. Third, this study used cross-sectional data from 2002 and 2018, and not the yearly data in between; therefore, we could not investigate the pattern and changing trend in BMI over the 16-year period. To predict future changes in BMI and evaluate the effectiveness of interventions, annual changes in BMI distribution need to be monitored. Fourth, this study was conducted in a single district in China, limiting the generalization of the findings. Further studies are needed to investigate whether other regions in China and other developing countries are undergoing similar transitions in BMI distribution, and what kind of interventions are needed to prevent adverse health consequences.

The whole spectrum of BMI distribution among school-aged children in Yuhua District was shifted over the 16-year study period in both sexes. The increases in BMI were moderate at the 5th and 50th percentiles, and was greatest at 85th percentile. Further studies should investigate the short- and long-term effects of increasing BMI on population health, and interventions to prevent the adverse health effects of increased BMI are needed.

Funding: This work was supported by the Science Foundation of Hunan Children’s Hospital (2019-A).

Reporting Checklist: The authors have completed the STROBE reporting checklist. Available at http://dx.doi.org/10.21037/tp-20-305

Conflicts of Interest: All authors have completed the ICMJE uniform disclosure form (available at http://dx.doi.org/10.21037/tp-20-305). The authors have no conflicts of interest to declare.