Numerous studies suggest that the genetic and environmental factors are involved in birth defects information and it is reported that folate plays a pivotal role in normal embryonic development (2). Pregnant experimental animals subjected to folate deprivation often fail to deliver normal pups at term, instead of giving birth to pups with multiple malformations (6,7). Epidemiological studies have demonstrated that the benefit of folic acid supplementation in preventing NTD and other congenital abnormalities.

Folate, which acts as a one-carbon donor involved in both the synthesis of nucleotides and methyl transfer reactions, is important for methylation of DNA, protein and lipids. Epidemiological studies provide evidence that among environmental factors, folate status plays a key role in birth defect. Polymorphic variants of genes in the folate and homocysteine pathways have well-associated with the risk of birth defects, including common variants rs1801133 (c.677C>T) of MTHFR (5, 10-methylenetetrahydrofolate reductase) and rs1801394 (c.66A>G) of MTRR (methionine synthase reductase). It is reported that rs1801133 was associated with the risk of CL/P, NTD and CHD (8-12), while rs1801394 was associated with the risk of CHD and NTD (13-15). Embryogenesis is a restrict hierarchy developing process and birth defects occur at the earlier stage. CL/P, NTD and CHD were developed from different germ layers. So we want to know that whether the two folate pathway related polymorphic variants are having? A common risk fact related to birth defects and which germ layer the two folate pathway associated polymorphic variants are related to.

Stillborn birth defects case subjects were obtained from Shanxi Province of Northern China (16). This study was approved by the Committee of Medical Ethic in the Capital Institute of Pediatrics, Beijing, China; and written informed consent was received by the adult subjects and written informed consent from the parents on behalf of the minors. The enrolled pregnant women were diagnosed by local trained clinicians and ultrawave, and then registered in a database. The surgical details were described in our previous paper (17). In the present study 250 birth defects subjects were employed who were diagnosed with CHD, NTD and craniofacial malformations covering gestational ages more than 13 weeks. A total of 420 unrelated region-matched healthy subjects were recruited as normal control.

Genomic DNA was isolated from muscle tissue and extracted with the Blood and Tissue DNA Kit (QIAGEN, Dusseldorf, Germany) according to manufacturer’s instructions. The concentration and purity of DNA were determined by absorbance at 260 and 280 nm.

SNPs were genotyped using the SNaPshot analysis (ABI). In brief, the genomic DNA was individually amplified by using the primers listed in Table 1, After SAP and Exo I purification, obtained purified template which include target SNP site. According to manufacturer’s instructions, extent primer (as shown in Table 1) and SNaPshot Multiplex were added into the template and the thermal cycling reaction was done. Then the genotyping samples were run on ABI 3730 automated sequencer and analyzed by Peakscan software.

Hardy-Weinberg equilibrium (HWE) in control was tested by χ2 test and the P values are larger than 0.05. To evaluate the associations between genotypes and case risks, OR and 95% CIs were calculated by unconditional logistic regression analysis with adjustment for age using the SNP Stats website (http://bioinfo.iconcologia.net/snpstats/start.htm). Each SNP was evaluated under four genetic models: a codominant model, a dominant model, a recessive model and a log additive model. All statistical tests were two-tailed, with P<0.05 regards as statistically significance, and performed by SPSS 15.0 software (SPSS, Chicago, IL, USA).

Description and classification of disease phenotypes

To characterized the present group of birth defect cases, we described the phenotypes of birth defects and complications according to the International Statistical Classification of Diseases and Related Health Problems 10th Revision (ICD-10) Version for 2010 (Figure 1A). Then, the presented phenotypes were sorted into ectoderm-, mesoderm- and endoderm-developed (Figure 1B). Multiple birth defects are defined as two or more unrelated major structural malformations that cannot be explained by an underlying syndrome or sequence (4,18). Figure 2 presented the sample characters in our cases, it shows that multiple birth defects were chose. 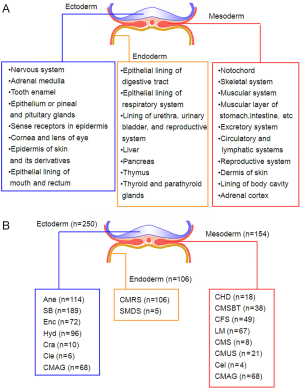 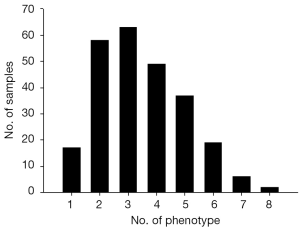 Associations of SNPs with risks of various disease phenotypes in cases

Association of SNPs with risks of germ layer-developed tissue defects

The present study indicated that genetic variants of MTRR and MTHFR were associated with risks of multiple disease phenotypes presented on Chinese North population. Further, they conferred protective factors of ectoderm- and endoderm-developed tissue malformations. However, only MTRR genetic variation was a protective factor of mesoderm-developed tissue malformations.

Our data presented an implication that causation of birth defect and complications in humans could be resulted from the nutrition gene factors in mammals, some previous studies supported this viewpoint. During gastrulation the visceral endoderm defects were formed because of the mutation of the Slc40a1 gene encoding the iron transporter ferroportin1; and further the mutant embryo were developmentally delayed and exhibited exencephaly, microphthalmia and generalized edema (19), Moreover, Slc40a1 knockout mice results in embryonic lethality at E7.5 (20). Similarly, the failure of distal visceral endoderm migration and primitive streak formation were brought on deletion of mouse prickle1 gene, one of the core components of planar cell polarity signaling (21). Importantly, in humans a homozygous mutation PRICKLE1 caused an autosomal recessive progressive myoclonus epilepsy-ataxia syndrome, their further experiment validated that the mutation could reduce the effect of overexpression of wild type prickle1 and decreased gastrulation defects (22). Taken together, these lines of evidence demonstrate that in early stages of embryogenesis, mild mutation may result in the embryonic defects. In addition, the roles of both genes in visceral endoderm developing may be a clue for the present study in which ectoderm-developed defect seems to has a closer association to endoderm- than mesoderm-developed defect, because during gastrulation visceral endoderm and yolk sac provide for the nutritional support (including the uptake of folate) and exchange of waste products between the maternal circulation and the developing embryo (23).

In the present study the genetic variants rs1801394 and rs1801133 as important biological markers hint us the etiologies of NTDs and other malformations in various stages of development. During the embryogenesis, MTRR is transcriptionally expressed during metaphase I of oocyte to blastocyst in the pre-implantation development (24), and distributed in the neural tube and other tissues (25). MTRR knockout results in embryonic lethality and a hypomorph, with reduced MTRR activity by gene trap technology, adversely impacts reproductive outcomes and birth defects (25,26). The variant rs1801394 locus is in flavordoxin domain of MTRR gene and the mutation affects the affinity of MTRR to MTR (27). These indicated that rs1801394 is a functional genetic variant and potentially affects the early embryogenesis. MTHFR is expressed from metaphase I oocyte to senescence. Mild MTHFR deficiency caused by c.677C→T encodes a thermolabile enzyme with reduced activity (28). MTHFR knockout significantly decreased S-adenosylmethionine levels and increased S-adenosylhomocysteine levels with global DNA hypomethylation, and further show developmental retardation with cerebellar pathology and abnormal lipid deposition (29), which are consistent with our previous studies that in the NTDs population in Shanxi Province area, global DNA are hypomethylated (17,30,31). Taken together, these hint us that MTRR and MTHFR function spanning the embryogenesis, and their functional genetic variants potentially impact the embryo development at the early stage of embryogenesis, hence, result in complicated disease phenotypes.

In summary, our present study first reports an overall view about a subset of birth defect cases in Chinese northern population of Shanxi. And upon their complicated phenotypes, we use two genetic variants of MTRR and MTHFR, both of which play roles in early embryogenesis, to discover the probability of common tissue pathogenesis. The implication could be a reminder for our consideration about the etiology of birth defects, furthermore, the present study offers an experimental support for the supplementary of folic acid in the early stage of embryogenesis.

We are grateful to all participating hospitals for their assistance in sample collection and recording of clinical information. We thank all of the women who participated for their cooperation.

Funding: This work was supported by grants from National Natural Science Foundation of China (No. 81300489).