Congenital diaphragmatic hernia (CDH) is associated with a wide range of morbidity and mortality. Patients with mild physiologic consequences of CDH almost always survive, while those with the severest consequences have significant mortality. Pre- and post-natal management of this latter group remains challenging and sometimes controversial. In these cases, mortality rate was reported as high as 70% to 80% (1,2).

Among proposed factors, the lung to head ratio (LHR) and liver herniation estimation by prenatal sonography have both been widely evaluated. However, the significance of these findings varies between examiners and centers, and even in experienced hands appears to be highly subjective (2).

Recently, prenatal magnetic resonance imaging (MRI), which can provide more objective cross-sectional quantification, has been evaluated as a potential method for identifying prognostic factors (4-6). Although total lung volume has been demonstrated to correlate with prognosis, adjustment of these calculations by gestational age or fetal body weight is not always feasible or available. Considering the difficulty of measurement of lung volumes with MRI, a morphologic study may be preferable (7). Liver herniation into the chest and the position of the stomach have been evaluated as alternative prognostic factors (8). However, the detection of these are not always possible, and it can be difficult to assign a degree of abnormality to these observations.

Lung to liver signal intensity ratio (LLSIR) has been found to be related to lung maturity in T2-weighted MRI, and appears to be associated with prognosis in CDH patients (9,10). Therefore, we propose consideration of a novel stratification system, using LLSIR in fetal MRI, to improve the simplicity and, preferably accuracy of prediction for postnatal prognosis in patients with CDH.

With IRB approval from our hospital (R29-11), a retrospective chart review was conducted. Between September 2009 and February 2016, 31 patients underwent prenatal evaluation for CDH, with fetal MRI performed at our institution. Among these, six patients were excluded, due to other anomalies such as severe congenital heart disease, chromosomal aberrations, or poor image quality due to motion artifact precluding analysis. In total, 25 patients met study inclusion criteria.

Stratification was performed utilizing coronal sections of T2-weighted MRI studies obtained after 29 weeks of gestation. LLSIR was calculated by the study radiologist (Y Sugioka) as reported by Oka et al. (11). We placed one region of interest (ROI) within the homogenous portion of the liver and the contralateral lung on the same section. LLSIR findings were graded as follows: Grade I, ipsilateral lung at the apex was detectable; Grade II, ipsilateral lung at the apex was undetectable and LLSIR was ≥2.0; Grade III, ipsilateral lung at the apex was undetectable and LLSIR was <2.0 (Figures 1,2). The primary outcome was death, and the secondary outcomes included gestational age, birth weight, Apgar scores at 1 and 5 minutes, severity [usage of inhaled nitric oxide (iNO) alone or with extracorporeal membrane oxygenation (ECMO) defined as severe], and need of a synthetic patch for closure. In addition, we examined the association between liver herniation and survival, severity and need of patch closure in this cohort. 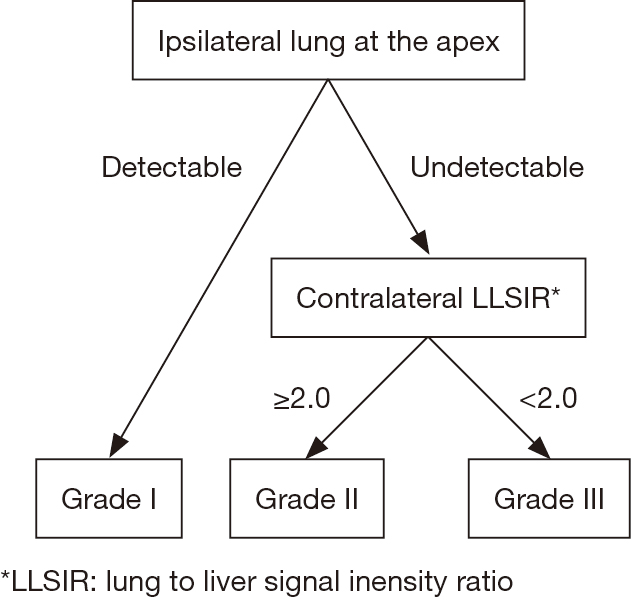 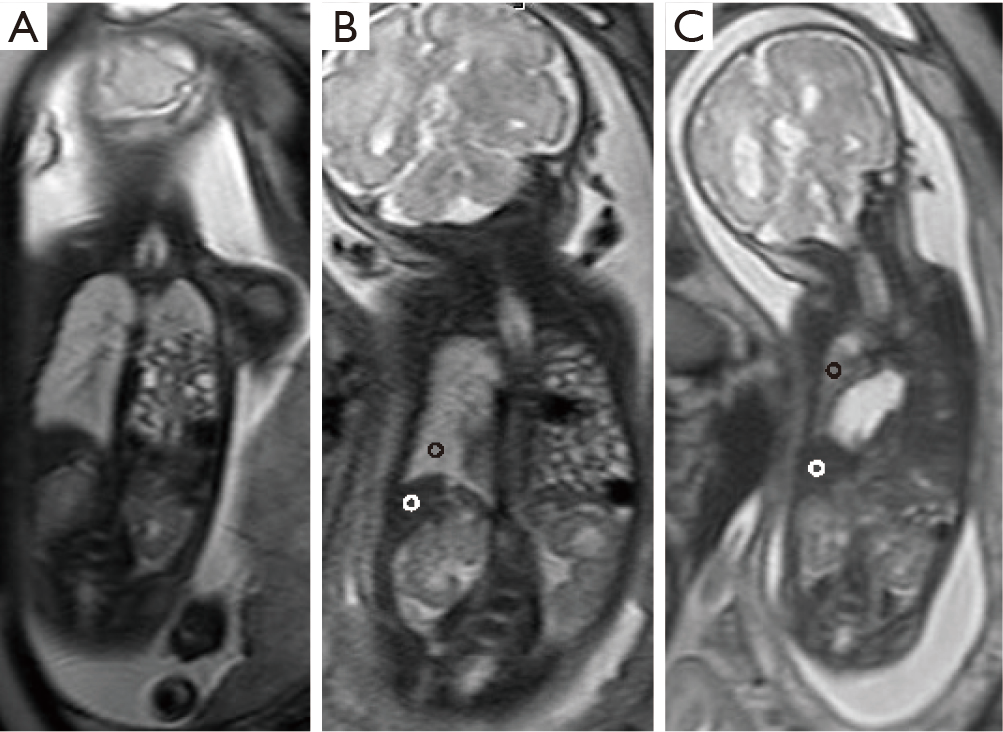 Statistical analysis was performed using chi square test (categorical variables) and Kruskal-Wallis test (continuous variables) to compare the distribution of valuables among three grades. Continuous values were expressed as median (range). In addition, logistic regression models were conducted to calculate odds ratios (ORs) and 95% confidence intervals (CIs) of each grade for death and patch closure. Fisher’s exact test was performed to analyze the association between the presence of liver herniation and survival, severity and the requirement of patch closure. All analyses were two-tailed and were conducted using JMP® 13.2

Table 1 Outcomes according to the grade system
Full table 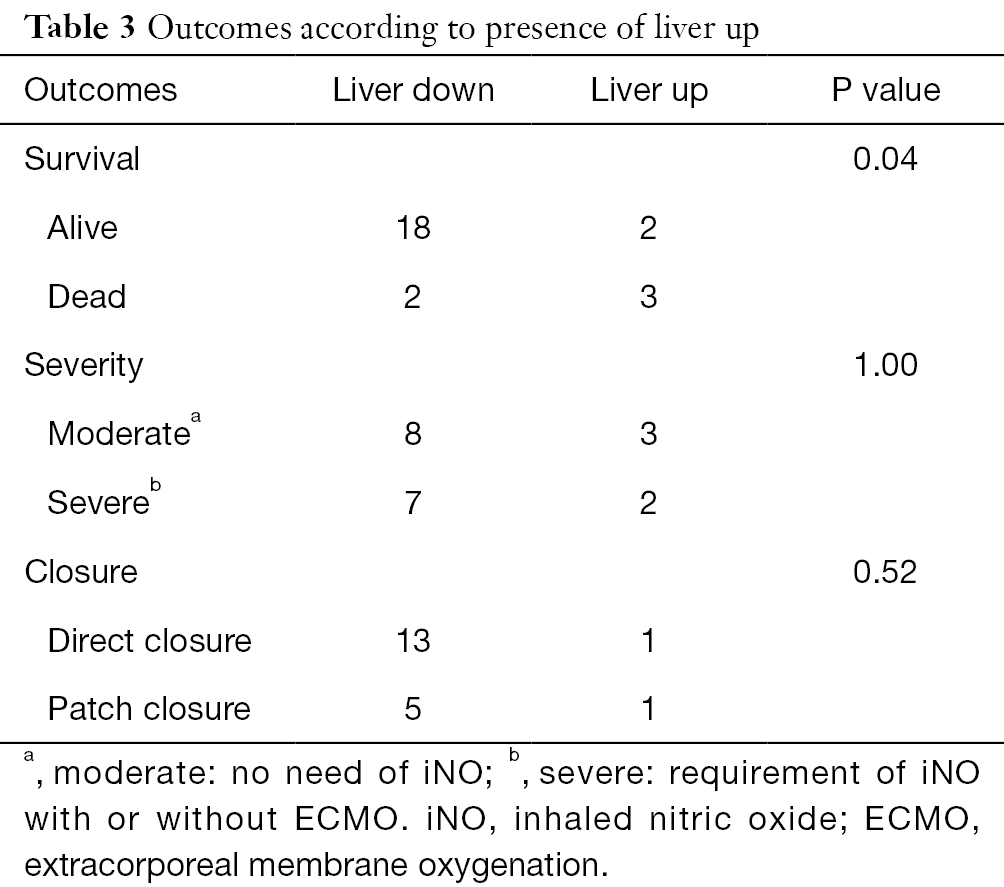 Table 3 Outcomes according to presence of liver up
Full table

Our proposed stratification algorithm is based on the lung volume and maturity, as characterized by fetal MRI. Total lung volume has been previously demonstrated to contribute significant prognostic information (12,13). Recently, observed to expected (o/e) total lung volume in fetal MRI has been considered a factor which predicts postnatal survival (14). However, the measurement of total lung volume and correction with gestational age may not always be feasible or available. We found that patients with higher Grades tended to lower gestational age, birth weight, and Apgar score at 5 minutes. Ipsilateral lung detected at the apex (Grade I) resulted in sufficient total lung volume for not only survival, but also appears to predict relatively mild persistent pulmonary hypertension. In our series, ipsilateral lung was less definitively detected at mediastinum in one patient in Grade II (data not shown), which was thought to be more compressed than at the apex.

Furthermore, it was revealed that all cases graded I and II with undetectable ipsilateral lung at the apex required a synthetic patch for closure. To our knowledge, there has been no previous identification of anatomic features on prenatal imaging which have been reported to be associated with patch closure in the English literature.

o/e-LHR and liver herniation estimated by prenatal ultrasound sonography have been widely accepted as prognostic factors for survival of patients with CDH. As o/e LHR measured by ultrasonography was highly subjective and competency and reliability were achieved only by experienced operators (17), the data were available in only ten cases of this cohort. Although, some reports showed o/e-LHR was correlated with not only survival but also disease severity (18,19). o/e-LHR was deemed not to be a good predictor for ECMO utilization and other factors related to severity (14,20,21). In our series, o/e-LHR in two patients with severe CDH who required ECMO were both more than 50% (data not shown).

The most advantageous feature in this stratification system compared to other prenatal prognostic factors is that image-defined stratification with the calculation of LLSIR is relatively easy on MRI images without any specific techniques nor the need of experienced examiners.

There are several limitations in our study. First, this was a retrospective single institution study, with small number of patients. Second, LLSIR was calculated by a single radiologist who was blinded to clinical outcomes, limiting the ability to demonstrate reproducibility of this metric. Third, we used MRI studies obtained after 29 weeks of gestation. However, it is possible that LLSIR changes dynamically during fetal development as lung maturity progresses, and thus the optimal timing of MRI for the grading system needs to be clarified.

Despite the above limitations, our pilot data suggests that this image-based stratification system, based on anatomic features and tissue characteristics detected by MRI, may provide additional useful information for patients with CDH. We propose that further investigation with a prospective multi-institutional study is warranted to validate this stratification system. The use of LLSIR in fetal MRI may add prognostic information regarding postnatal survival, disease severity, and the requirement for patch closure in CDH.

We thank Dr. Jessica Kandel and Dr. Charles Stolar for help in writing the manuscript.

Ethical Statement: This study was approved by the institutional review board (IRB) of our hospital (R29-11).