Bronchial Dieulafoy’s disease (BDD) is a vascular malformation characterized by the presence of a dysplastic artery in the bronchial submucosa. It is very rare but potentially fatal due to massive bronchial bleeding. Since first described by Sweerts et al. in 1995 (1), fewer than 90 cases have been reported in the English-language literature, mainly in middle-aged patients with a history of smoking (2). BDD is even rarer in the pediatric population, with only 10 cases having been reported to date (3-6), although the presentation is similar to that of adults. Thus, the accumulation of knowledge resulting from case reports contributes to the enhancement of the awareness of pediatric BDD and the prevention of fatal consequences. Herein, we report two cases of BDD in children who presented with recurrent hemoptysis and were treated with bronchial artery embolization (BAE) (Figure 1). We present the following cases in accordance with the CARE reporting checklist (available at https://tp.amegroups.com/article/view/10.21037/tp-22-294/rc). 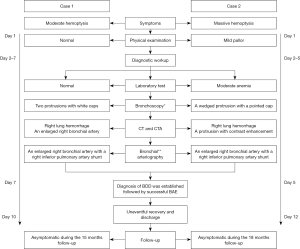 All procedures performed in this study were in accordance with the ethical standards of the institutional and/or national research committee(s) and with the Declaration of Helsinki (as revised in 2013). Written informed consent was obtained from the parents of the patients for the publication of this case report and accompanying images. Copies of the written consent are available for review by the editorial office of this journal.

An 8-year-old boy was admitted to our hospital following a 5-day history of intermittent episodes of moderate hemoptysis. Apart from cough, he had no other symptoms, including fever, vomiting, melena, or abdominal pain. No history of any respiratory or systemic disorders was provided. Physical examination was unremarkable. A thorough laboratory workup was performed, including complete blood count, liver and renal function, a respiratory viral panel, coagulation studies, antinuclear antibody, anti-glomerular basement membrane antibody, and anti-neutrophil cytoplasmic antibodies. No evidence of discernable causes responsible for hemoptysis was found, such as infection, cardiovascular disease, rheumatic diseases, tumors, and coagulation disorders. Chest X-ray on admission was normal. Computed tomography (CT) demonstrated a right lower lobe infiltrate (Figure 2A), suggesting a possibility of pulmonary hemorrhage. CT angiography (CTA) revealed tortuous and enlarged right bronchial arteries arising from the thoracic aorta and coursing down to the right lower lobe (Figure 2B). 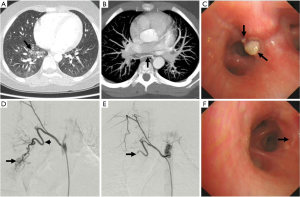 The patient continued to suffer from recurrent hemoptysis after admission and was therefore given empirical antibiotics (ceftriaxone) and a hemostatic agent (etamsylate). On day 4 of admission, a bronchoscopy was performed, which revealed two non-pulsating nodules measuring approximately 2 to 4 mm at the anterior basal segment of the right lower lobe (Figure 2C). Both nodules had a white cap and grossly normal mucosa. An attempt at bronchial brushing caused mild oozing of blood at the margin of the protrusion, which was stopped by the topical application of epinephrine. The endoscopist refrained from performing a biopsy due to a suspected submucosal vascular malformation based on CTA findings. Nevertheless, bronchoalveolar lavage fluid was collected, which did not reveal the presence of common pathogens or hemosiderin-laden macrophages. On day 7 of admission, the patient underwent bronchial arteriography under general anesthesia, which revealed anastomosis between an enlarged right bronchial artery and the right inferior pulmonary artery, corresponding to the lesion site and the source of bleeding (Figure 2D).

At this time, we considered the diagnosis of BDD based on the presence of bronchial nodules and bronchial artery malformation at the corresponding site. Superselection of the abnormal artery was performed by using a coaxial microcatheter with a 2.5 F catheter (Cook, Bloomington, IN, USA). Successful embolization using 300 to 500 µm polyvinyl alcohol (PVA) particles was consequently carried out. A final arteriography confirmed that the right bronchial artery was occluded, and the shunting disappeared (Figure 2E). The patient recovered with no further episodes of recurrent hemoptysis and was discharged three days after BAE. A follow-up bronchoscopy was performed one month later and showed that the two nodules had all but resolved (Figure 2F). At the time of writing, he remains asymptomatic at the 15-month follow-up.

A 6-year-old girl was referred to us for three episodes of unprovoked massive hemoptysis in a week. She was previously healthy with no significant medical history. She appeared well on admission and denied other symptoms. Physical examination revealed mild pallor due to moderate anemia (hemoglobin 83 g/L). A diagnostic laboratory workup revealed no underlying etiologies of hemoptysis. Chest X-ray showed right lung infiltrates, and CT demonstrated ground-glass opacities in the middle and lower lobe of the right lung (Figure 3A). Although no vascular malformation was depicted on CTA, a small protrusion with contrast enhancement was noted at the right bronchus, suggesting that it may be hypervascularized (Figure 3B). 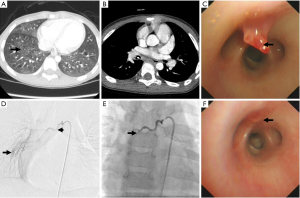 Despite using etamsylate, she still had several episodes of small-volume hemoptysis. On day 3 of admission, we performed a bronchoscopy after the amount of bleeding was reduced, and it showed a wedged protrusion with a pointed cap arising from the lateral wall of the right bronchus intermedius (Figure 3C). The protrusion was about 4 mm in height, and the overlying mucosa appeared smooth. Tortuous, non-pulsating vessels with active blood oozing were prominent beneath the bronchial mucosa. The diagnosis of BDD was highly suspected, and a biopsy was therefore not considered due to its high risk. The bronchoalveolar lavage fluid test was negative. A bronchial arteriography on day 5 confirmed our suspicions. An enlarged right bronchial artery with a right inferior pulmonary artery shunt was observed, which is in keeping with BDD (Figure 3D). Subsequent BAE using 300 to 500 µm PVA particles was successful (Figure 3E), and hemoptysis did not recur after the procedure.

The patient was discharged on day 12 with a hemoglobin level of 97 g/L. A second bronchoscopy seven days after BAE showed that only a slight elevation of the mucosa was seen at the site of the former lesion (Figure 3F), and the protrusion disappeared one month after BAE. Similarly, a follow-up CT one month later confirmed complete absorption of the pulmonary hemorrhage. No recurrence of hemoptysis occurred during the 18-month follow-up, and her hemoglobin level returned to normal.

Dieulafoy’s disease is an uncommon pathologic condition characterized by aberrant arteries with intraluminal protrusion and a tendency for bleeding induced by spontaneous rupture (7). This vascular malformation was first reported in the gastrointestinal tract, which is also the most affected site, and the involvement of the bronchus is rare (2). The etiology and pathogenesis of BDD remain inconclusive and may be of a congenital nature (8). In addition, smoking, chronic airway inflammation, and iatrogenic injury also serve as possible contributory factors for hemorrhage (9). The rarity and insufficient understanding of this “adult disease” may lead to delayed diagnosis and treatment in children with hemoptysis, which in turn results in life-threatening hemorrhage and a high mortality rate. Nevertheless, pediatric case reports are increasing annually with the advancements in diagnostic technology (10). Overall, the clinical features of BDD are broadly consistent between children and adults, with a male preponderance, hemoptysis as the first symptom, and predominant right bronchus involvement (11). Both of our cases had typical clinical features, bronchoscopic findings, and imaging features of BDD. This may help enhance the awareness of pediatricians regarding this rare cause in the differential diagnosis of hemoptysis.

The traditional view that pathological examinations are essential for a definite diagnosis of BDD has recently been challenged (2,3,11-13). Although pathological features of the submucosal arterial malformation represent the gold standard for diagnosis, its use has been limited due to the high risk of fatal bleeding secondary to biopsy (2). Furthermore, endobronchial biopsies often cannot achieve their desired purpose due to the difficulty of high-accuracy sampling arising from pinpoint lesion sites and blood pooling in the bronchial lumen (14). Ideal biopsy specimens should be obtained by an autopsy or a lobectomy, but it is not appropriate as a pre-operative diagnostic approach. A recent study of 73 BDD patients showed that bleeding complications occurred in 17 of the 19 cases who underwent endobronchial biopsy (11), but none of the specimens had diagnostic value due to the poor quality of the samples. Moreover, only five out of the 33 postoperative or autopsied histological specimens revealed classic pathological features. Among the ten documented cases of pediatric BDD in the literature (3-6), none had a pathological biopsy performed. Considering the above, endobronchial biopsies were not considered in our patients.

Generally, CTA should be the first-line modality for identifying abnormal bronchial arteries. However, it may not be superior to bronchial arteriography due to the lower amount of contrast agents injected into the bronchial arteries, which is more evident in children with smaller vessel diameters. Abnormal bronchial arteries were unmasked by CTA in only 5 out of 10 pediatric patients in the literature (10,15,16,18,19). As noted in case 2, bronchial arteriography was strongly recommended based on bronchoscopic findings, although CTA failed to demonstrate any vascular malformations. Despite this, CTA played an essential role in revealing the nature of the protrusion. The presence of a nodule with contrast enhancement was critical to prevent biopsy and subsequent iatrogenic hemorrhage. Endobronchial ultrasonography is a new diagnostic method used to clarify the nature of endobronchial protrusions and provides clues for BDD diagnosis (2). Nevertheless, it is mainly limited by the size of the scope and has only been reported in one pediatric BDD case (18).

Currently, BAE is the preferred treatment approach, and lobectomy is generally preserved until failure of embolization or subsequent recurrence (2). Various embolic agents have been used for BAE, including PVA particles, Embosphere microspheres, gelatin pledgets, and metal coils. PVA is the most commonly employed agent in children, partly because of adequate experience and a perceived lower risk for inadvertent embolization (20). Metal coils are seldom used alone in BAE due to the high rate of revascularization by collaterals, and they limit options for future BAE. Minor complications include transient chest pain and dysphagia, which occur in about half of patients. Major complications of BAE include spinal ischemia, ischemic colitis, myocardial infarction, and stroke, occurring in less than 5% of cases (21). Proper choice of embolic material and identification of hazardous collaterals are crucial to avoid inadvertent embolization

In contrast to earlier reports revealing an unsatisfactory recurrence rate (20/38) after BAE in adult cases (11), pediatric patients may have a better prognosis with a lower recurrence rate (2/10) at similar follow-up times (3-6). The difference in prognosis may also be associated with the progress of BAE in the last decade. Since recurrence usually occurs within 2 years after BAE (22), we believe that BAE is satisfactorily efficacious for our patients who were free of hemoptysis for more than 15 months.

Our cases highlighted the importance of considering BDD in the context of hemoptysis and endobronchial protrusion in children. Bronchial arteriography plays a critical role in diagnosis, especially in cases where CTA does not reveal vascular malformation. Early identification is essential for appropriate management and avoidance of tragic consequences. The overall prognosis of children with BDD after BAE is favorable.

We would like to thank Conway Niu from Perth Children’s Hospital for his help in polishing our paper.

Reporting Checklist: The authors have completed the CARE reporting checklist. Available at https://tp.amegroups.com/article/view/10.21037/tp-22-294/rc

Conflicts of Interest: All authors have completed the ICMJE uniform disclosure form (available at https://tp.amegroups.com/article/view/10.21037/tp-22-294/coif). The authors have no conflicts of interest to declare.

Ethical Statement: The authors are accountable for all aspects of the work in ensuring that questions related to the accuracy or integrity of any part of the work are appropriately investigated and resolved. All procedures performed in this study were in accordance with the ethical standards of the institutional and/or national research committee(s) and with the Declaration of Helsinki (as revised in 2013). Written informed consent was obtained from the parents of the patients for publication of this case report and accompanying images. Copies of the written consent are available for review by the editorial office of this journal.