EME is a rare early-onset epileptic syndrome, which characterized by frequent intractable seizures and severe developmental impairment. Thus far, EME caused by RARS2 variants has not yet been reported. Here we described a female term neonate with heterozygous variants of the RARS2 gene who was presented with EME. We present the following case in accordance with the CARE reporting checklist (available at http://dx.doi.org/10.21037/tp-20-110).

A female term neonate was the first pregnancy for a nonconsanguineous couple. She was delivered at 39 weeks of gestation via cesarean section for intrauterine fetal distress and premature rupture of fetal membranes with weight of 3,300 g (50%), length of 50 cm (50%) and head circumference of 34 cm (50%) at birth. Her Apgar scores were 8, 10, 10 respectively. Her parents were healthy and denied any family history of genetic disease. Her mother had regular prenatal examinations, and denied any abnormal results, and denied the history of exposure to any harmful substances.

At day of life 2 (DOL2), groan was manifested, which initially was attributed to respiratory infection. After breast and artificial feeding, hypoglycemia, metabolic acidosis and hyperammonemia were noted repetitively at DOL7 and improved considerably after fasting and parenteral nutrition. Concentrations of plasma ammonia and blood lactic acid remained normal value when she was given extensively hydrolyzed protein formula. 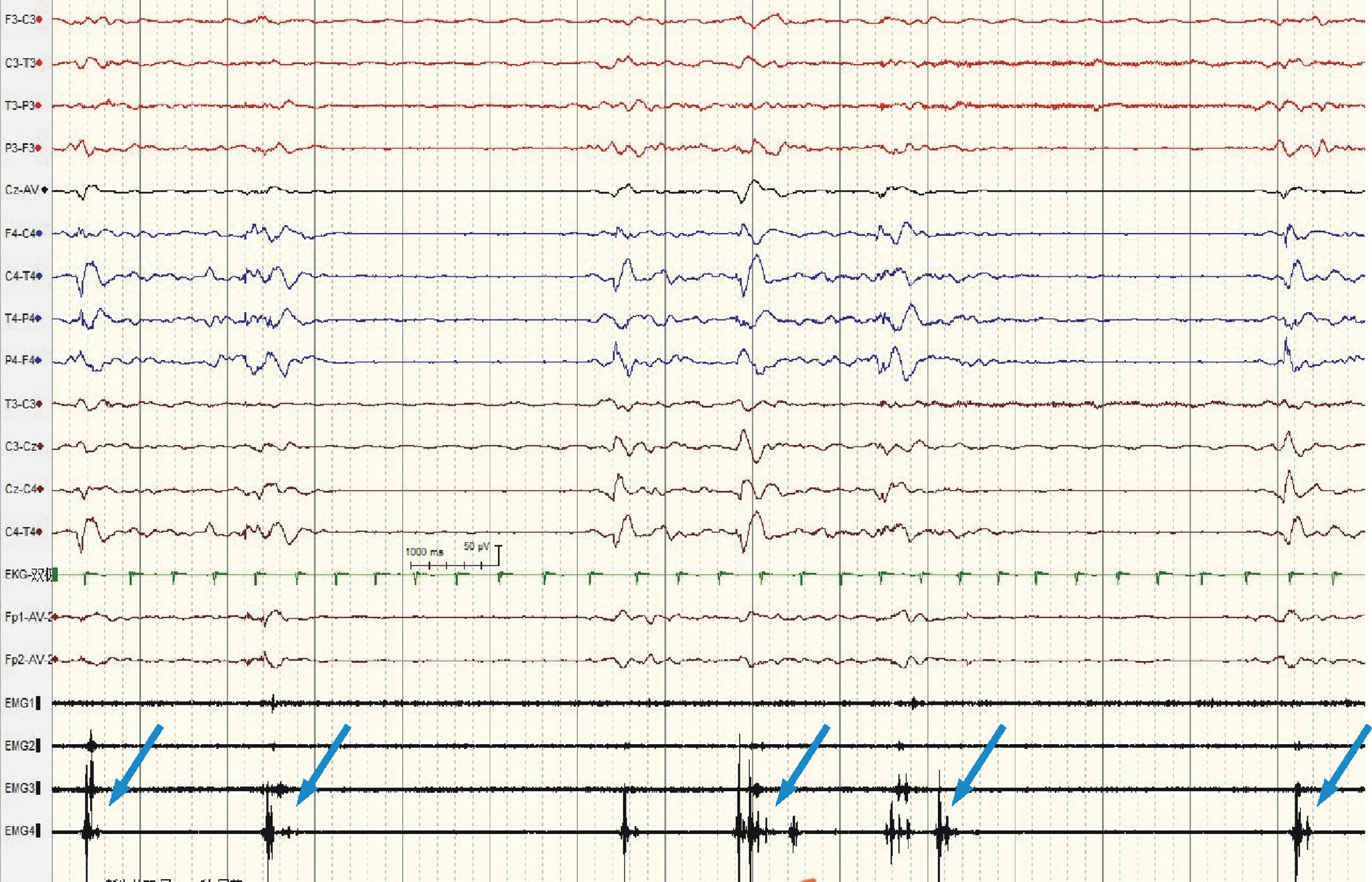 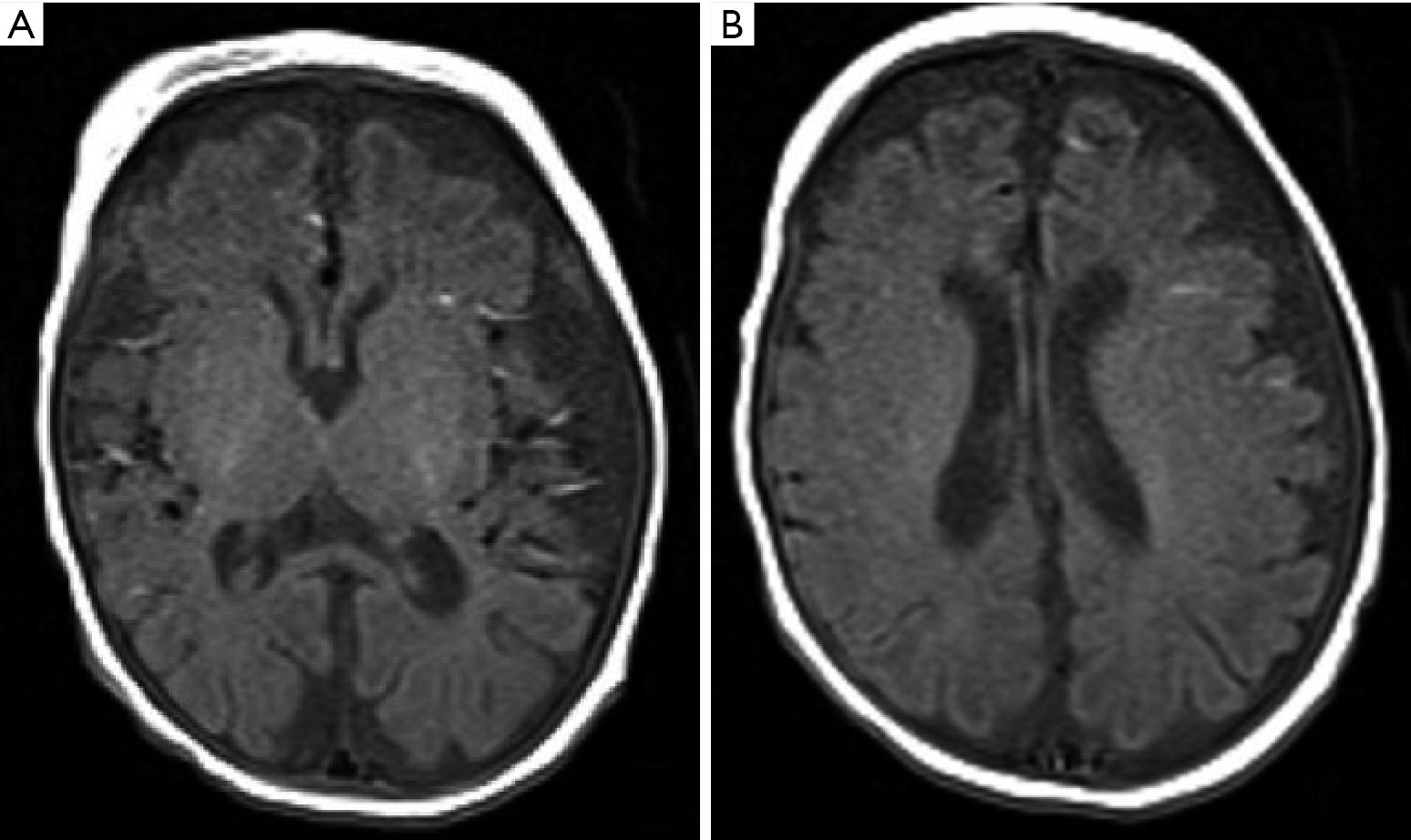 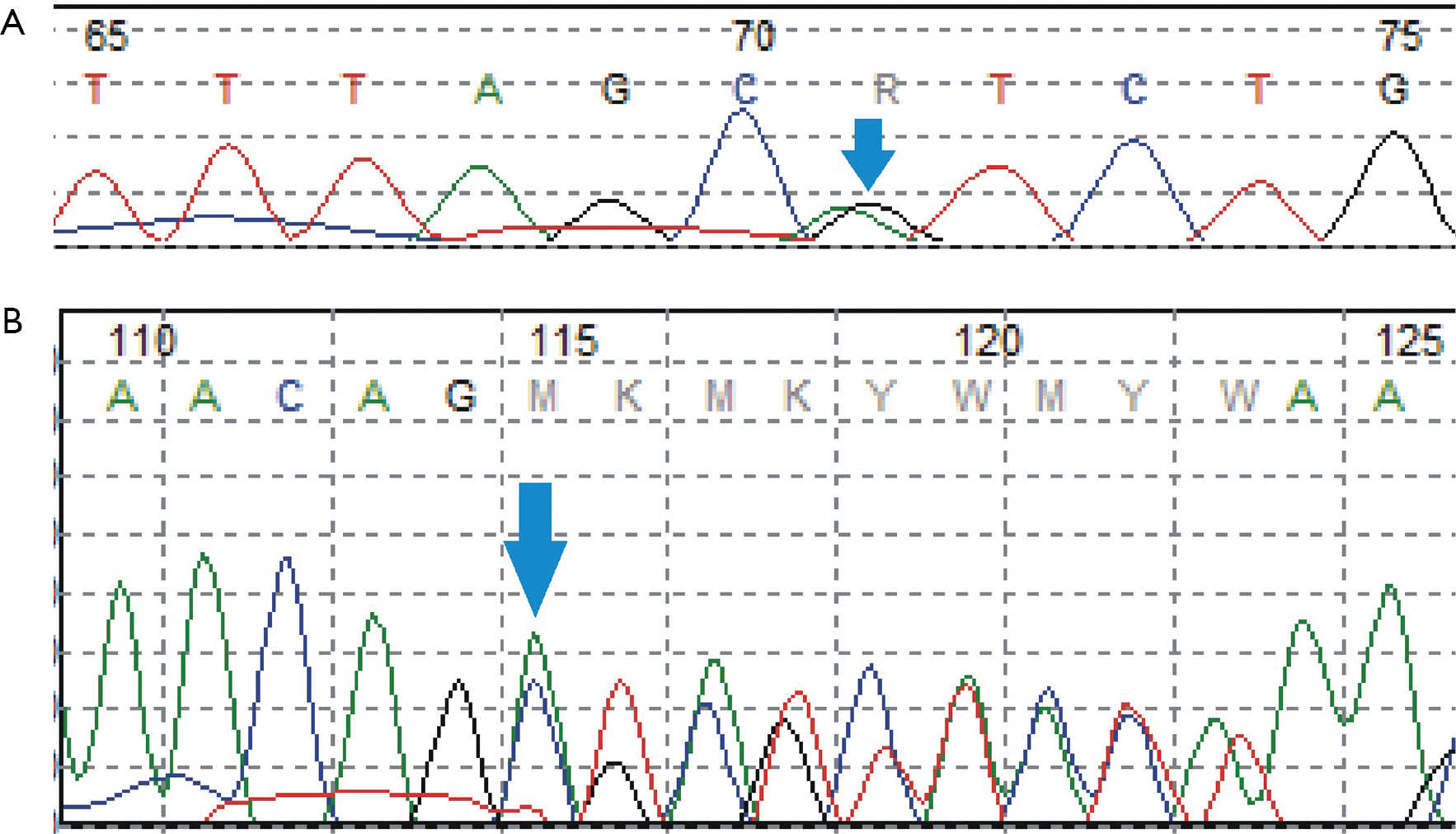 Groan after birth was the first symptom manifested in our patient, while respiratory symptom was seldom described previously. Edvardson et al. (2) have reported one patient had a progression from a single apneic episode at DOL2 to respiratory failure at the age of 3 weeks. The probable causes were supposed to be metabolic acidosis, insufficient mitochondrial energy production or central nervous dysfunction.

From the characteristic features of RARS2-PCH6 on neuroimaging perspective, MR imaging of most patients within the first months of life revealed cerebral and/or pontocerebellar atrophy that may be progressive over time (2-6). Other imaging features described in reported patients include subdural effusions and abnormal myelination (1,6). To the best of our knowledge, significant small vessels revealed in bilateral temporal region by MRI have not been reported so far. This phenomenon is unclear and we speculate that the blood vessels may have not decreased accordingly with cerebral atrophy.

The electroclinical spectrum of Patients with RARS2-PCH manifest multiple different seizure types including generalized tonic-clonic, focal, and myoclonic seizures. Our patient presented with EME, which has not been reported in RARS2-PCH6 previously. EME is a rare early-onset epileptic syndrome that usually begins in neonatal period. It is characterized by frequent myoclonus and partial seizures and by an SB pattern in the EEG (7).

Although underlying pathologies of EME are not demonstrated in the majority of cases, the most striking feature of the high incidence of EME in familial cases with metabolic disorders suggests that inborn errors of metabolism and/or genetic factors play a prominent role (7). Metabolic abnormalities such as nonketotic hyperglycinemia and disorders of amino acid metabolism were frequently described in the cases with EME (8-10). Other related genes, including CDKL5 (11), KCNQ2 (12), ErbB4 (13), SCN1A (14), GABRB2 (15), SIK1 (16), AMT (17) and SLC25A22 (18), as well as a 9q33‐q34 deletion including STXBP1 and SPTAN1 (19), have been reported to be associated with EME.

Mathew et al. (20) has reported that two siblings with RARS2 variants started myoclonic jerks after birth, however, related MRI and EEG features during the period of neonate were not provided in their report. Nuclear mitochondrial genes, such as AMT encodes an enzyme system for cleavage of glycine which is confined to the mitochondria and SLC25A22 encodes mitochondrial carriers that transport a variety of metabolites across the inner mitochondrial membrane. RARS2 encodes the mitochondrial aminoacyl‐tRNA synthetase enzyme and play an important role in mRNA translation, a key process in maintaining cell integrity, so there may be some correlation in the pathogenesis of EME caused by nuclear mitochondrial gene variants.

In our case, we diagnosed EME by VEEG and known she had a poor outcome with refractory epilepsy and severe developmental impairment. The main causes of EME were metabolic factors and genetic factors (7). She had no obvious abnormal metabolism. Genetic testing helped us to find the cause in such a complex congenital disease. However, there are no effective treatments at present. The parents also refused to accept any other treatments, such as adrenocorticotropic hormone, ketogenic diet, and vagus nerve stimulation. So we couldn’t obtain the data of following VEEG, MRI and general clinical characteristics.

This case report expands the phenotypic spectrum of the RARS2 variants. Meanwhile, RARS2 should be considered be a causative gene in patients with EME.

The authors are thankful for the doctors and nurses of the Department of Neonatology, Children’s Hospital of Fudan University, Shanghai, China.

Reporting Checklist: The authors have completed the CARE reporting checklist. Available at http://dx.doi.org/10.21037/tp-20-110

Conflicts of Interest: All authors have completed the ICMJE uniform disclosure form (available at http://dx.doi.org/10.21037/tp-20-110). The authors have no conflicts of interest to declare.

Ethical Statement: The authors are accountable for all aspects of the work in ensuring that questions related to the accuracy or integrity of any part of the work are appropriately investigated and resolved. All procedures performed in studies involving human participants were in accordance with the ethical standards of the institutional and/or national research committee(s) and with the Helsinki Declaration (as revised in 2013). Written informed consent was obtained from the patient. A copy of the written consent is available for review by the Editors-in-Chief of this journal.