Effect of high-volume hemofiltration on children with sepsis

Sepsis is a life-threatening organ dysfunction due to a dysregulated host response to infection (1), which caused 5.3 million deaths each year. The mortality of sepsis is up to 30–50% (2). sepsis remains the leading cause of death in the intensive care unit (ICU). The imbalance of immune response plays an important role in the pathophysiology of sepsis, and may cause organ dysfunction in sepsis (3). The early pro-inflammatory stage of sepsis is a defensive response of the body to invading microorganisms. This is characterized by release of pro-inflammatory mediators [tumor necrosis factor (TNF), interleukin (IL)-1, IL-6, IL-8, platelet chemokines, and myocardial depressant factor]. However, excessive release of pro-inflammatory mediators can result in damage to the host. Also, excessive anti-inflammatory response impairs immunity and increases the number of immune-regulatory cells, leading to immunosuppression. As the two poles of the immune response process, inflammation and anti-inflammatory reactions run through the entire process of sepsis development, and together determine the direction of the disease (4,5).

Continuous renal replacement therapy (CRRT) is a major treatment modality for patients with sepsis. In addition to advantages in correcting water and electrolyte disorders, maintaining hemodynamic stability and promoting renal function recovery, studies have proposed a role in immunomodulation by efficiently removing proinflammatory and anti-inflammatory cytokines through CRRT (6,7). High volume hemofiltration (HVHF) is a mode of CRRT with higher volume which are expected to achieve higher removal efficiency of cytokines. Based on this, several clinical trials have been performed to investigating the clearance efficiency of cytokines by HVHF in patients with sepsis. However, the effect of HVHF on cytokines clearance, its clinical efficacy and effect on children are not yet clear (8-11). By conducting a prospective cohort study, we aimed to investigate the treatment effect of HVHF in children with sepsis in this study.

Participants were eligible for enrollment if they meet the following criteria: (I) diagnosed as sepsis, (II) less than 6 hours to establish a diagnosis of sepsis, and (III) aged less than 18 years old. The sepsis meets the diagnostic criteria in the Society of Critical Care Medicine/European Society of Intensive Care Medicine/American College of Chest Physicians/American Thoracic Society/Surgical Infection Society (SCCM/ESICM/ACCP/ATS/SIS) (12) or the Third International Consensus Definitions for Sepsis and Septic Shock (1). Patients who have received relevant blood purification treatment before admission, children with genetic metabolic disease, HIV infection or other immune deficiency will be excluded. Patients were randomized to receive standard treatment plus routine CRRT (Control group) and standard treatment plus HVHF (HVHF group). We use randomized block design for grouping: out of every four patients, two were allocated to Control group, and two to HVHF group at random. Physicians and nurses were not blinded to the allocated treatment.

All patients received standard treatment including routine fluid resuscitation, administration of antibiotics, application of vasoactive and inotropic agents, balance of fluid, blood gas and electrolyte, etc. (3). All patients were treated with the Prismaflex system (Gambro, Sweden). The AN69 membrane (sulfonated polyacrylonitrile membrane) was used in this study, on which the sulfo had a large quantity of negative charge, which had a strong removal effect for various medium-sized molecules and macromolecules. CRRT treatment started within 6 hours after the diagnosis of sepsis. The continuous veno-venous hemofiltration (CVVH) model was adopted. The ratio of pre-dilution vs. post-dilution was 1:2. The rates of replacement fluid were 30 and 60 mL/kg/h replacement fluid for CRRT and HVHF, respectively. Blood pump flow was 3 mL/kg/min and the ultrafiltration volume was set to “no ultrafiltration when patients had normal renal function” and to an “ultrafiltration rate at 1–2 mL/kg/h when patients had oliguria or anuria”. For anticoagulation, a conventional continuous intravenous infusion of heparin was prescribed to maintain the level of activated partial thromboplastin time (APTT) at 1.5–2 times the control value. The replacement fluid constituted of 1,500 mL normal saline, 500 mL 5% glucose, 125 mL 5% sodium bicarbonate, 10 mL 10% calcium gluconate, 6 mL 10% potassium chloride and 0.75 mL 25% magnesium sulfate.

The primary end point was death from any cause within 28 days after randomization. Secondary end points included cytokines (IL-6, IL-10, TNF-α) levels after treatment, the oxygenation index, lactate, serum creatinine, urea and PRISM III score. Complications in the trail process were assessed additionally.

SPSS software, version 17.0 (SPSS Institute Inc), was used for statistical analysis. All data are tested for normality and expressed as mean ± standard deviation. A t-test was used for continuous variables, and χ2 test was used for categorical variables. Analyses of data were made by an independent statistician. P<0.05 indicated a significant difference.

General characteristics of the children 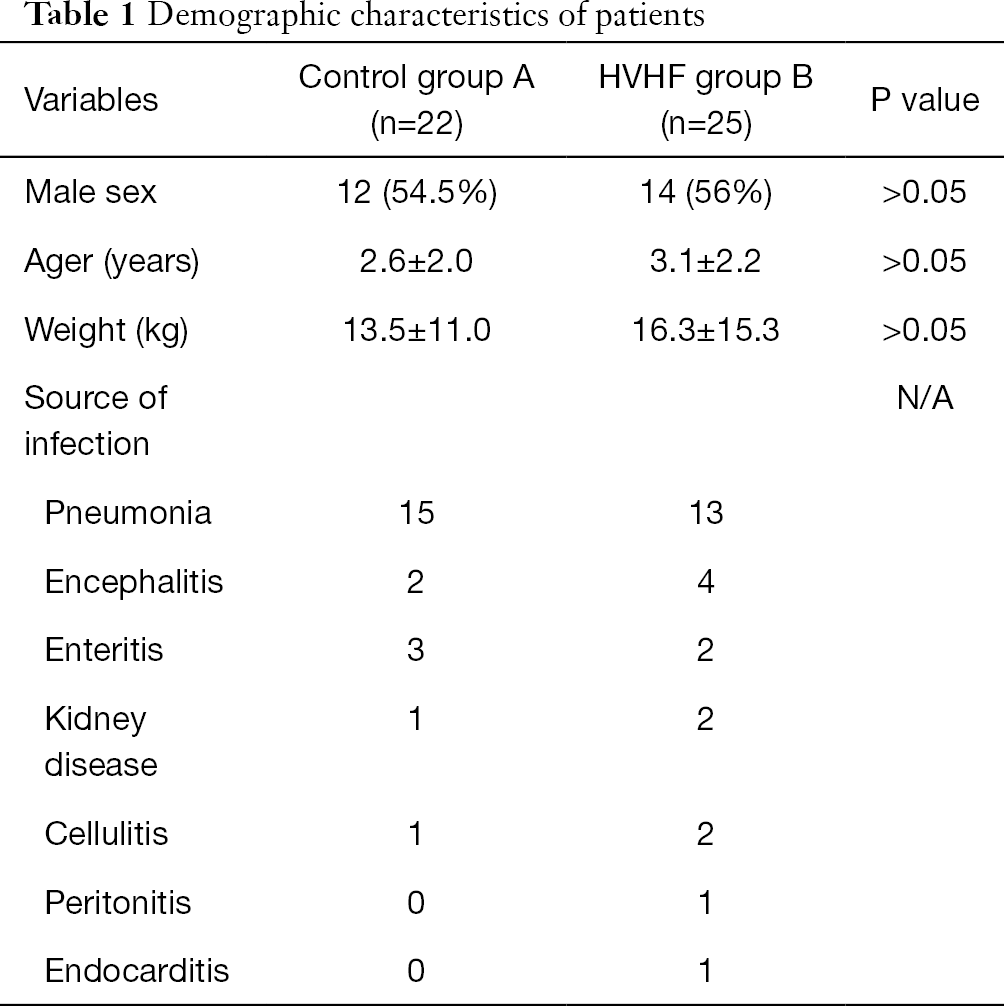 Comparison of the oxygenation index in children

Changes in the PRISM III score during treatment

During HVHF therapy, 7 patients among HVHF group (7/30, 23.33%) showed low potassium levels and hypocalcemia in CRRT. These patients returned to normal after corresponding electrolytes were added to the displacement liquid. Four patients among HVHF group (4/30, 13.33%) showed hypotension during their treatment, which was considered to be related to the excessive removal of fluid after ruling out other potential causes. These patients returned to normal after fluid therapy and adjustment of fluid removal. No severe hemolysis, thrombosis, hemorrhage or unstable blood pressure was observed in any of the patients.

Sepsis has always been a challenge in critical care medicine. The main pathophysiology of sever sepsis is a “waterfall-like” release of plenty of inflammatory mediators, resulting in SIRS and multiple organ dysfunction syndrome (MODS). Under normal circumstances, pro-inflammatory and anti-inflammatory responses in the body are in a state of dynamic equilibrium. Overreaction of either side can cause nonequilibrium, resulting in either immune enhancement (e.g., SIRS) or immunosuppression (e.g., compensatory anti-inflammatory response syndrome). CRRT has benefits of accurate fluid management and capability of removing inflammatory mediators, and it is applied to treat sepsis and achieves a certain efficacy (13-15). Cole et al. (9) reported that continuous blood purification therapy volume could be classified as conventional and high volume of hemofiltration, which determine the type of filtration media and play an important role in sepsis and MODS. There is not yet a consensus on the therapeutic volume for HVHF, especially for children continuous hemofiltration with a replacement fluid rate of >50 mL/kg/h is generally accepted as HVHF.

In our study, HVHF with a replacement fluid volume of 60 mL/kg/h was used for treatment of sepsis. Mortality rate at day 28 was used as the primary endpoint to assess prognosis of sepsis patients. The mortality rate at day 28 in HVHF group was lower than that in Control group, but there was no significantly statistical difference. Ronco et al. (16) found that the survival rate of septic shock patients increased from 18% to 47% as the replacement fluid volume raised from 35 to 45 mL/kg/h. However, Parikh et al. failed to confirm that high-volume hemofiltration (40 mL/kg/h) could improve patients survival rate at day 90 compared to low-volume hemofiltration (20 mL/kg/h) (17). Due to the age distribution and the severity of the disease, clinical studies on high-flow hemofiltration for sepsis have shown different results, suggesting a possibility of high-volume hemofiltration benefit in selected populations (18).

The possibilities of increasing the clearance of soluble cytokines through high intensity hemofiltration have been proposed previously (19,20). In this study, circulating TNF-α, IL-6, IL-10 levels from HVHF group showed a significant decrease compared with those from Control group after 72 hours of treatment. Besides, compared with the Control group, the cytokine levels of HVHF group experienced faster cytokine decline. This may indicate that circulating cytokines were more efficiently removed when CRRT was applied at a volume higher than that administered under standard care. The serum cytokine levels evaluated in this study were somewhat lower compared with recent reports containing cytokine levels in sepsis patients. We believe that differences in detection methods and patient conditions are the source of this difference.

Our study showed that for children in HVHF group, serum creatinine and blood urea concentrations showed a gradual declining trend, with a decrease at 72 hours after treatment compared with 0 hour (P<0.01). However, there were no significant differences in serum creatinine and blood urea concentrations in Control and HVHF group before and after treatment. For children with sepsis, early HVHF is able to not only reduce the fluid overload caused upon fluid resuscitation, but can also remove metabolites, such as creatinine and urea, quickly and effectively. A retrospective study of 113 critically ill children showed that, before CVVH, children with a relatively light fluid overload have a higher survival rate, especially for those with MODS (21). HVHF can both remove excess fluid and balance metabolic derangements, which might be one of the reasons for the higher survival rate of HVHF group, but there is no significantly statistical difference.

On the basis of conventional treatment of sepsis, HVHF treatment can effectively remove inflammatory mediators, reduce excessive inflammation in patients with sepsis, improve metabolism of tissues, and stabilize in-vivo microcirculation. This process improves the condition of sepsis and improves the prognosis. HVHF may be an effective treatment for sepsis. Furthermore, the results of the presented study are preliminary data and further studies should be stated.

Conflicts of Interest: All authors have completed the ICMJE uniform disclosure form (available at http://dx.doi.org/10.21037/tp.2020.03.13). The authors have no conflicts of interest to declare.

Ethical Statement: The authors are accountable for all aspects of the work in ensuring that questions related to the accuracy or integrity of any part of the work are appropriately investigated and resolved. The study was approved by the Ethics Committee of the Children’s Hospital of Zhejiang University School of Medicine. Informed written consents were obtained from the parents of the patients.