Recent epidemiological data has demonstrated a high overall prevalence and increasing incidence of inflammatory bowel disease (IBD) in the Canterbury region of New Zealand (1,2). Furthermore, the incidence of IBD in children in this region has increased many-fold over the last two decades (3). IBD in this age group can be complicated by nutritional deficiencies, impaired linear growth and psychological complications (4,5). In addition to facing various obstacles directly and indirectly related to their disease, these children all face the prospect of transitioning from paediatric to adult care at some stage following their diagnosis.

Transition of care is defined as a purposeful planned movement of adolescents and young adults with chronic physical and medical conditions from child-centred to adult-oriented health care systems (6). The absence of a smooth transition from paediatric to adult services is associated with various adverse outcomes, such as increased “lost to follow-up” rates, increased admission rates and variability in adherence to medications (7,8). Data from clinics managing other chronic illnesses such as type 1 diabetes and cystic fibrosis clearly supports the concept of transition clinics and provides a sound basis to apply such an approach in IBD (9,10).

Various barriers to successful transition in IBD have been described. Several reports indicate that adult gastroenterologists generally feel inadequately trained in adolescent care (11-13). In a recent survey of Australasian gastroenterologists, only 23% of respondents stated that adolescents with IBD were adequately prepared for transition to adult care (12). Poor handover of information and patients’ lack of responsibility for their own care were identified as major barriers to successful transition. Lack of self-efficacy and disease-specific knowledge are also likely to impact negatively on the transition process (14,15).

While many publications have examined the views of practitioners about transition and have provided guidelines for the process of transition, few studies have focused on the views and perspectives of young people about transition (16,17). The current study aimed to identify and explore the issues important to young people with IBD as they transfer to adult services.

A qualitative study was undertaken initially to identify issues important to young people with IBD. Young people diagnosed with IBD at Christchurch Hospital, Christchurch, in the Canterbury region of New Zealand, were invited to participate in a focus group. Participants were selected to represent three distinct groups: “pre transition”, “within transition” and “post transition”. Eligibility for participation included diagnosis of IBD for more than a year, diagnosis before the age of 16 years and current age between 14 to 20 years. All participants gave informed consent. Ethical approval for the study was obtained through Southern Health and Disability Ethics Committee (HDEC) (Ref number: 14/STH/188).

The focus groups each met on one occasion and a semi structured group interview was conducted by a single investigator (SK). The interview was audio recorded for later thematic analysis. The interviews were analysed for predominant themes, opinions, concerns and ideas. These themes were then used to design an online questionnaire to evaluate young people’s thoughts about the transition process.

The questionnaire arising from the focus groups was initially piloted with four local young people with IBD for readability and appropriateness. The final questionnaire (available from the authors on request) was then used to ascertain further perspectives of the transition process in a larger group of young people who had been diagnosed with IBD before the age of 16 years.

The questionnaire asked respondents to self-report details about demographics, disease type, disease severity and medications (past and current). Respondents were asked questions about their own transition experience and factors relating to the transition process. Multi-choice, open text and ranking questions were included. Transition was defined within the questionnaire as the process from moving from pediatric to adult services. A specialist transition clinic was defined as one involving both a pediatrician and an adult gastroenterologist.

Seven participants aged between 14 and 21 years of age attended the focus groups. Three participants were pre-transition, two were within and two were post transition. All were patients seen at Christchurch Hospital, Canterbury, where there is a structured joint transition clinic.

Common themes included apprehension about meeting new teams, and being in new physical environments (Table 1). Participants were concerned about talking about potentially embarrassing issues while transitioning. There was agreement that having a shared clinic was positive. The groups felt that having an approachable doctor was important.

Table 1 Key themes from focus groups involving children and young people who had not yet undergone transition (pre-transition), who were in the process of transition (within transition) or who had completed transition (post-transition) at Christchurch Hospital, Canterbury, New Zealand
Full table

Participants who had transitioned felt that a joint clinic was positive and that having an IBD nurse would be helpful. The idea of using technology to aid in transition was also mentioned. The groups felt that self-management and disease knowledge is an important measure in assessing readiness for transition.

Sixty respondents completed the online questionnaire, but seven were not eligible for inclusion (no diagnosis of IBD). All of the 53 remaining participants were diagnosed at 16 years or younger (Table 2). The age range of included children ranged from early adolescence to young adulthood. Forty-eight (90.6%) of the 53 participants were diagnosed with CD. Thirty-eight percent had previous surgery. Thirty-eight (71.7%) respondents were taking 1 or 2 medications daily, five were receiving three medicines and one four medicines. Nine were not currently on any therapy. 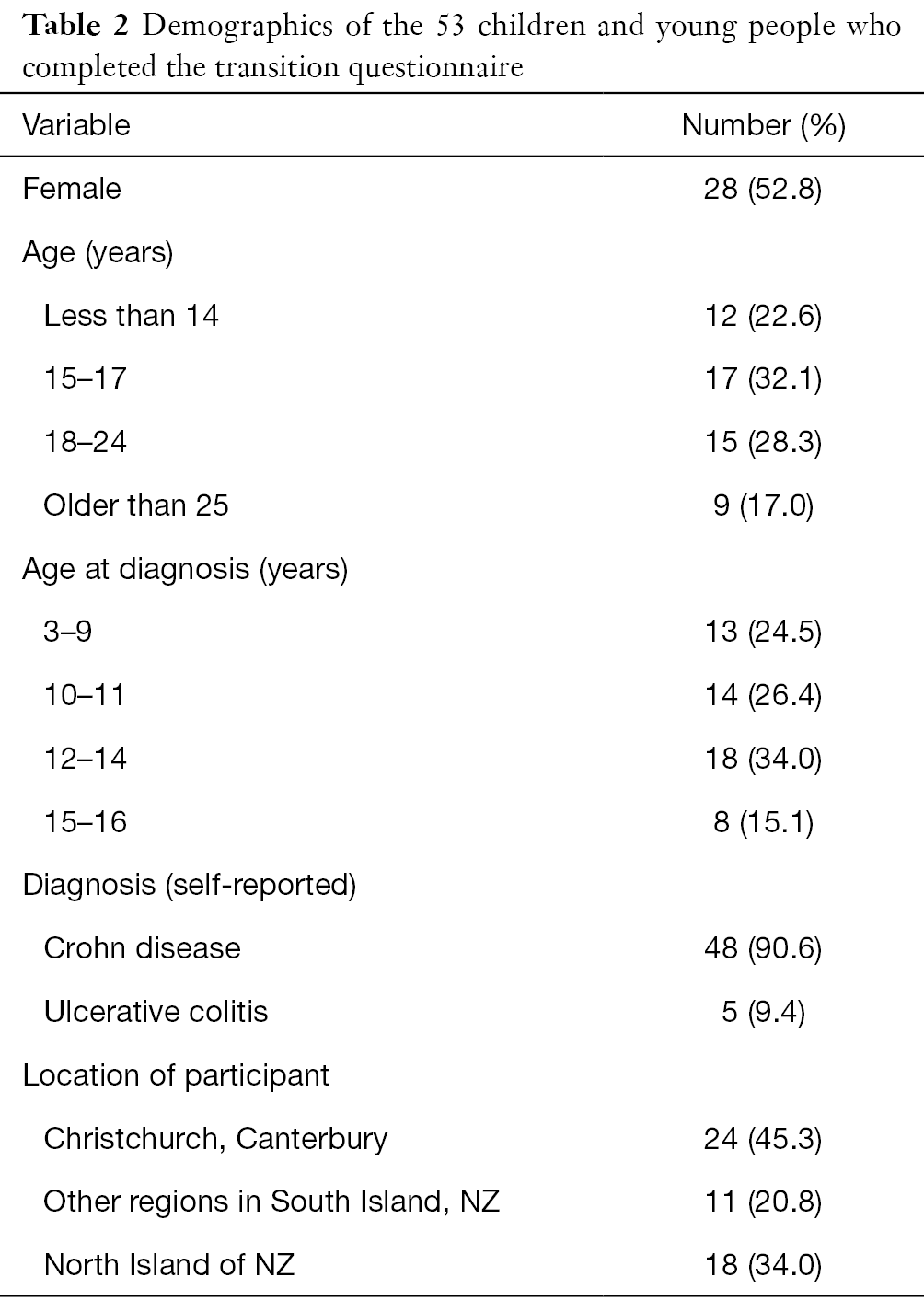 Experience of the respondents with transition

Ten (19%) of the participants had completed transition and eight (15%) participants were currently in transition. The remaining respondents were awaiting transition (n=10), did not have any experience of a transition process (n=22) or were unsure of their transition status.

Participants’ opinions about the transition process

The participants provided their opinions about the most important difficulties they faced in transitioning (Table 3). The most common difficulty overall, regardless of transition status was “Meeting a new doctor”. In the post transition group the difficulty ranked number one most commonly was “expressing embarrassing/personal questions”.

Table 3 Participants’ responses to the question: “When facing transition clinic the main difficulty you faced or face are”. The participants were categorised as being pre-transition (pre), in the midst of transition (during), completed transition (post) or had not undergone a transition process (never)
Full table

When considering how to determine readiness for transition, equal numbers of respondents ranked “Having stable, inactive disease” and “the patient’s own decision concerning readiness to transition” as the most important factors (Table 4). Three participants (all pre-transition) indicated that parental assessment was important.

Table 4 Participants’ responses to the question: “What factors are most important in determining your readiness for transition?” The participants were categorised as being pre-transition (pre), in the midst of transition (during), completed transition (post) or had not undergone a transition process (never)
Full table

Table 5 Participants’ responses to question: “What factors make or would make transition easier for you?” The participants were categorised as being pre-transition (pre), in the midst of transition (during), completed transition (post) or had not undergone a transition process (never)
Full table

The aim of this study was to identify and explore transition-related issues relevant to young people with IBD. A range of children and young people at different phases of the transition process were able to provide their opinions. The main concerns of these young patients were about meeting a new team and building new relationships.

As IBD incidence rises, especially among children (15,18), more young people will be moving into adulthood with this lifelong condition. A growing body of work from other chronic diseases suggests that participation in transition clinics improves disease specific outcomes (8-10). For example, a cohort of young people with IBD who had received a formalised transition clinic had improved outcomes including medication adherence, missed clinics, surgery and admission rates (14) The retrospective nature of this study means that the two groups were not comparable due to differences in practice over the time period of the study. Self-efficacy has also been shown to improve, along with increased knowledge of the need for medications, with participation in transition clinics (19,20).

In the current study, the participants perceived that the biggest difficulty they faced was building a new relationship or establishing trust with the adult gastroenterologist. The only group who did not rank this as most important was the “post” transition group, who ranked expressing personal or embarrassing issues as the most important difficulty that they had faced. This emphasis on the importance of the new doctor taking on their care was also evident in the responses to the question about what was important for making transition easier: the majority of the participants ranked “the character of the adult IBD doctor” as the most important factor.

Qualitative work by Gray et al. (13) found that concerns about receiving poorer quality care in the adult setting and loss of valued relationships with paediatric providers were amongst the main issues reported by patients and parents facing transition in IBD. These findings and the current study highlight that while clinicians rate patient’s self-efficacy and disease knowledge as very important, the patient has different priorities, and is concerned about leaving the familiar paediatrician for an unfamiliar adult physician.

Of encouraging note, almost all the participants who had been in or had completed transition rated the process to be straightforward. This suggests that while people are fearful, the actual experience is better than anticipated. The nature of the current study did not enable further analysis of the factors that contributed to a smooth transition in each case.

While this study has used qualitative data to identify options for specific research questions, and has also included participants who are at various stages of the transition process, there are a number of limitations. The questionnaire was not formally validated but was based on the relevant themes from the focus groups. The overall size of the group that completed the questionnaire is relatively small, although is comparable with other IBD transition studies (13,17,19). In addition, the number of study participants from the Canterbury District Health Board, where there is an established IBD transition clinic, was high compared with other regions, which could lead to bias. Personal correspondence would suggest that most children in NZ do not have access to a formal transition clinic, and ad hoc arrangements are made as necessary.

In conclusion, transition from paediatric to adult care is a challenging time for patients, their families and healthcare systems. If transition is not planned and personalised, there is a risk that patients may fall through the cracks and consequently receive suboptimal care and even disengage with services. The current data shows that patients are concerned about meeting a new team and building a new relationship or trust. However, they also consider the character of their new team to be one of the most important factors in making transition easier. Patients advocate for their independence and highlight their own decision as an important factor in assessing readiness. It is vital that planning and conducting a structured transition is a collaborative process involving the patient, parents and healthcare providers.

Thanks to all participants for their time and contributions and to Crohns and Colitis NZ for their assistance with circulation of survey document.