Impairment of growth is recognized as one of the most serious complications of inflammatory bowel disease (IBD) in pediatric patients (1,2). Growth failure was reported to affect 15–40% of patients with pediatric onset Crohn’s disease (CD). In contrast, only 3–10% of children with ulcerative colitis (UC) may present with reduced height velocity at the time of diagnosis (3). Growth impairment has been defined in the Paris classification (Table 1) (4).

Several factors can contribute to growth failure in patients with IBD. It is well known that growth velocity is influenced by nutrition status, some treatment methods [e.g., corticosteroids (CS) administration], and by the disease itself. Some reports suggest that growth failure develops prior to the diagnosis of IBD, which means that malnutrition and hypercytokinemia due to the disease occur before other symptoms develop in pediatric patients. Figure 1 shows a typical case of pediatric onset CD with growth failure. Therefore, pediatric gastroenterologists should pay attention to patient’s growth not only during treatment, but also at the time of diagnosis. This review describes the epidemiology of growth failure in pediatric onset IBD and how IBD treatment affects the growth of these patients. 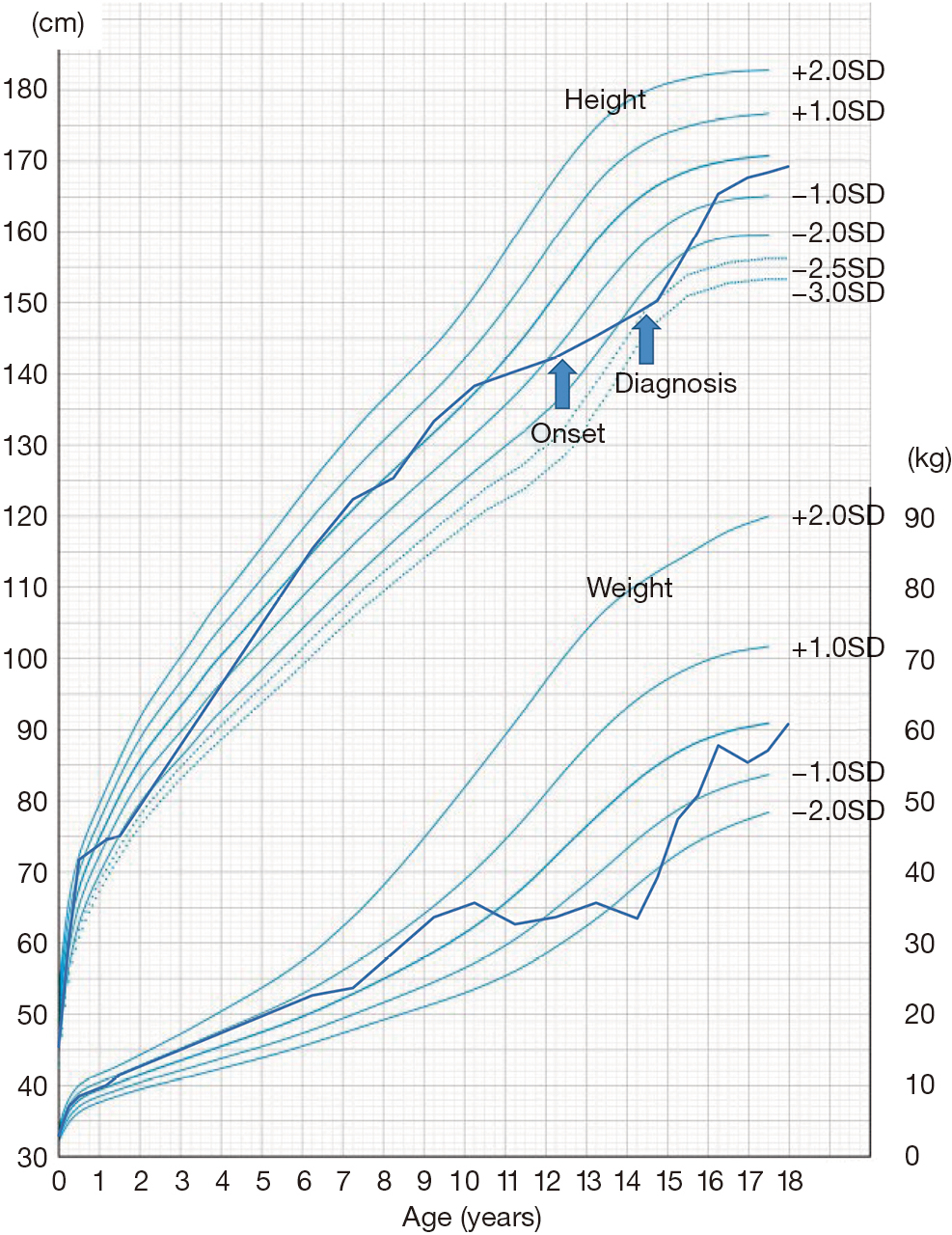 Figure 1 Growth chart of a typical patient with pediatric onset Crohn’s disease. Alterations in growth velocity were observed over the two years prior to the onset of disease symptoms (12 years) in this boy. Crohn’s disease was diagnosed at the age of 14 years, and he was treated with enteral nutrition and azathioprine, followed by infliximab. Use of corticosteroid was avoided to maximize his growth potential. The growth velocity was improved soon after commencing treatment, and achieved his target height at age of 18 years of age.

Growth failure is highly associated with malnutrition, which occurs secondary to decreased food intake due to abdominal pain and other symptoms, malabsorption due to intestinal mucosal damage, increased energy requirement due to inflammation, or drug-nutrient interactions. But it also occurs independently from malnutrition, by GH resistance due to inflammation (5).

Gryboski et al. (10) reported that children with CD have delayed gastric emptying, whereas children with UC had normal emptying. In this study, 12 out of 15 patients with CD showed upper gastrointestinal symptoms, such as nausea and anorexia, and five of them had evidence of growth retardation. As for malabsorption, protein losing enteropathy was frequently reported in patients with active CD (11).

GH resistance was reported to play a critical role in the growth failure that affects patients with IBD (5,12-14). The GH-insulin like growth factor (IGF)-1 axis regulates linear growth, and circulating IGF-1 levels were decreased in patients with active CD (15). The cause of low IGF-1 concentrations in children with CD is thought to be multifactorial, as IGF-1 concentrations may depend on several interrelated factors, such as nutritional status, disease activity, and circulating plasma cytokine levels, including levels of tumor necrosis factor (TNF) and IL-1.

As for clinical features affecting growth failure in IBD, prepubertal onset of CD was reported to be a risk factor for reduced final height (20). Retrospective data from the United Kingdom have shown that jejunal disease was negatively associated with lower final height (21). Ley et al. (22) suggested that growth velocity was negatively correlated with elevated C-reactive protein and orosomucoid levels in patients with pediatric onset CD. However, registry data from Belgium showed no association of growth outcome with age, sex, diagnostic delay, type of treatment, disease location, or disease activity at diagnosis, but only with disease activity 3 years after disease onset (23).

A guideline from the European Crohn’s and Colitis Organization and the European Society of Paediatric Gastroenterology, Hepatology and Nutrition (ECCO/ESPGHAN) suggests that growth impairment is considered rare in patients with UC who are not dependent on CS (24). Therefore, exclusion of Crohn’s colitis or primary GH deficiency should be sought when significant growth impairment is detected (24).

Growth failure can be diagnosed at any time of the disease course. Growth failure often precedes the development of abdominal symptoms. Growth retardation is mostly evaluated at the time of diagnosis of IBD. There are some population studies that compared growth data at diagnosis between CD and UC.

Data of growth failure at time of onset of IBD 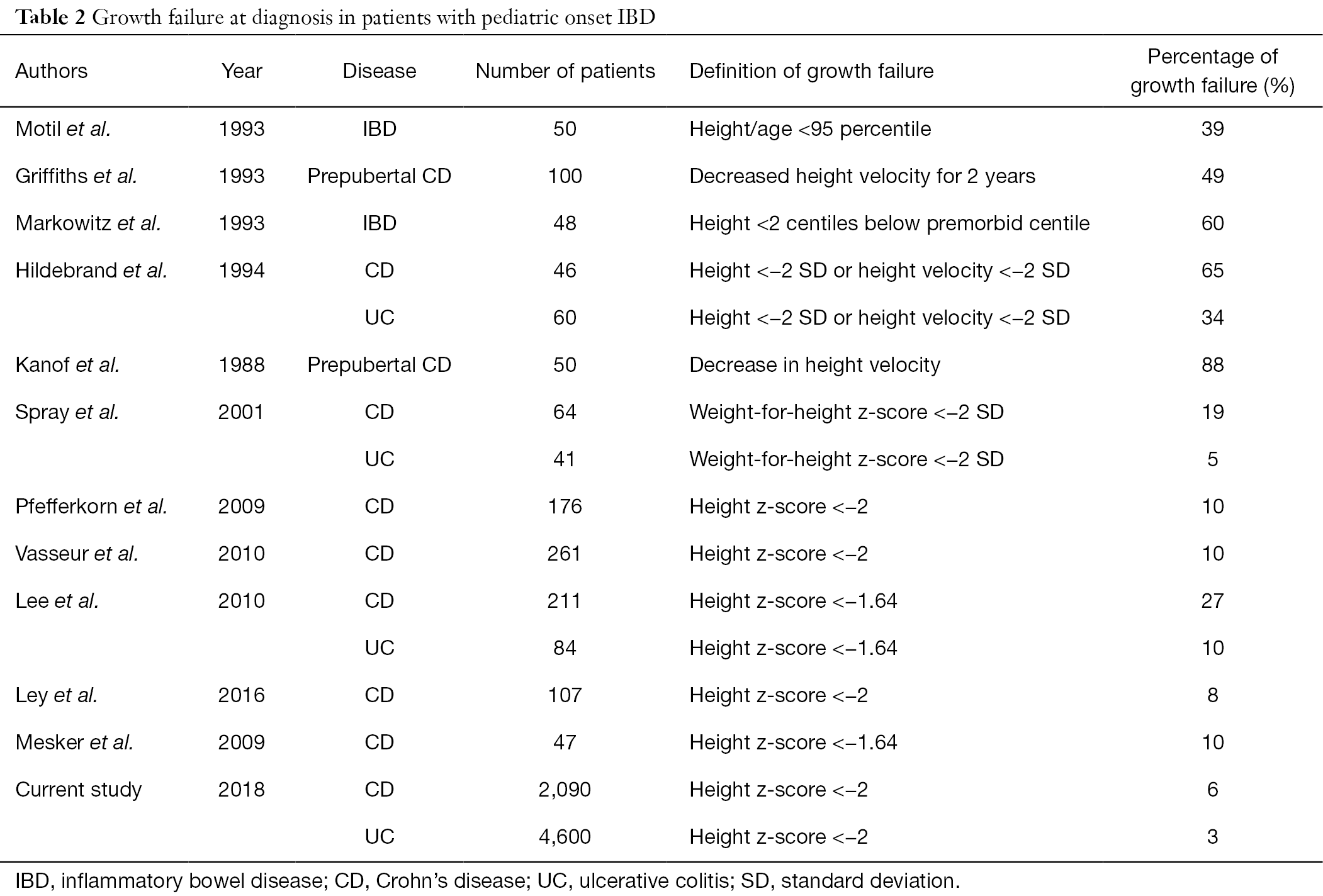 Ghersin et al. (34) from Israel reported the outcomes of a population-based study including 2,372 patients with IBD, and showed that male and female patients with CD, but not with UC, had a significantly lower weight compared to controls. In contrast, their height at late adolescence was not statistically different from that of controls. However, patients with CD diagnosed before the age of 14 years were significantly shorter than controls in this study.

Previous reports on adult final height in pediatric onset IBD are listed in Table 3 (3,16,21,22,27,28,32). Similar to the prevalence of growth failure at diagnosis, a trend toward lower prevalence of adult growth failure can be noted in recent studies. This fact may be associated with recent advances in treatment of IBD, which will be described below.

A guideline for the management of growth, published in 2008, suggested to use CS-sparing agents and initially treat with enteral nutrition, possible in combination with azathioprine/6-mercaptopurine (6-MP) (2). Surgery can be also considered in steroid-dependent patients (2).

Newby et al. (35) reviewed the effect of IBD treatment on growth failure in childhood CD, and found three randomized controlled trials. Markowitz et al. (28) reported that there were no significant difference in linear growth between a group treated with 6-MP and a placebo group, although the total CS dose received over 18 months was significantly lower in the 6-MP group. In two randomized studies, Sanderson et al. (36) and Thomas et al. (37) reported improved growth status in patients with CD who received exclusive enteral nutrition (EEN) when compared with children treated with CS (35-38). Recently, Connors et al. (39) suggested that patients treated with EEN experienced significantly greater linear growth recovery than patients that received CS 1 year after diagnosis. Furthermore, Cohen-Dolev et al. (40) reported in a prospective study on newly diagnosed pediatric CD that patients treated with EEN had better remission rates and growth outcomes at 78 weeks when compared with patients treated with CS.

Anti-TNF agents seem to improve patients’ growth status. Borrelli et al. (41) treated 16 patients with infliximab and reported that their mean height z-score was significantly improved after 6 months of therapy. Bamberger et al. (42) retrospectively reviewed the data of 61 patients with CD who had received anti-TNF agents and showed improvement in their adult final height. A study from Canada suggested that a positive effect on height velocity was observed only in pre-pubertal or pubertal patients, but was absent in patients with Tanner stage IV–V (43). The IMAgINE 1 study group has suggested that adalimumab also improved and normalized the growth rate of patients with CD at 26 and 52 weeks of treatment compared to baseline (44).

Duncan et al. (45) retrospectively reviewed the data of 16 patients with CD who received percutaneous endoscopic gastrostomy placement for the administration of supplementary nutrition and showed that their height SD improved significantly from −1.85 at the time of treatment to −1.03 at 2 years after treatment. However, five of them also received GH therapy after gastrostomy placement.

Wong et al. (46) reported the findings of a randomized control trial on recombinant human GH treatment for patients with pediatric onset CD and compared growth velocity before and after 6 months of GH administration. The median growth velocity was significantly improved in the GH group, whereas no significant change was observed in the control group. They suggested that the long-term efficacy of GH should be evaluated and that the therapy has only limited benefit for reducing clinical disease activity. The ECCO/ESPGHAN guideline suggests that GH treatment should be only considered in a limited number of cases due to limited evidence of efficacy (47).

As for effect of treatment on the growth of patients with UC, the ECCO/ESPGHAN guideline suggests that children with UC may have more CS-related complications, and even low CS doses (0.1–0.4 mg/kg/day) can suppress their growth (24,48). Although cohort data are lacking, since growth failure is rarely detected at UC onset, avoiding CS and choosing immunomodulators, anti-TNF agents, or surgical resection in refractory cases seems to be beneficial in achieving optimal growth in patients with pediatric onset UC.

This registry data was supported by a grant from ‘‘Intractable diseases, the Health and Labour Sciences Research Grants from the Ministry of Health, Labour and Welfare.’’ I appreciate Dr. Thomas Walters at The Hospital for Sick Children, Toronto, Canada, for his precious advice.