Minimally invasive, transcatheter therapeutic interventions for structural heart disease have evolved over the past several decades as appealing alternatives to open-chest surgery. Smaller incisions, shorter hospital stays and quicker recovery are outcomes that are ubiquitous to all approved transcatheter procedures, in comparison to traditional surgery. X-ray fluoroscopy (XRF) is the most commonly used imaging modality to guide transcatheter procedures. XRF offers certain advantages. Interventionalists have close familiarity with XRF systems. These systems are also widely available in centers with cardiac catheterization laboratories. XRF can visualize high X-ray attenuating devices such as radio-opaque catheters and metallic stents. However, XRF has certain disadvantages. For example, soft tissues such as myocardium, and valves are visualized poorly. Chambers and vessels are only transiently visible when filled with boluses of iodinated contrast, which can be nephrotoxic in susceptible individuals. Conventional X-ray also images using the principle of “projection” imaging, making it difficult to judge three dimensional (3D) perspective. Finally, over-reliance on XRF as the sole imaging modality exposes the patient and in-room personnel to the harmful effects of ionizing radiation. Wholly magnetic resonance imaging (MRI) (1-4) and ultrasound guided (US) (5,6) cardiovascular interventions have been tested in animal models and clinical studies as ionizing radiation-free alternatives to XRF. However, wide adoption of these methods has been prevented in large part by the lack of visually conspicuous devices that still maintain high mechanical performance.

XRF’s limitations have prompted industry and investigators to improve upon the cardiac cath-lab imaging ecosystem using existing commercial modalities and hardware. The conventional cath-lab commonly offers a pre-acquired MRI or computed tomography (CT) road map, real-time US, electromagnetic (EM) navigation and real-time XRF, all separately displayed on in-room monitors. These separated displays require the operator to cognitively integrate information from these images or imaging streams while they steer devices. A more sensible alternative is to co-register pre-acquired MRI, CT, 3D ultrasound, EM with XRF to provide the interventionalist with well defined, 3D anatomic perspectives so that they can steer devices toward tissues they wish to treat and away from tissues they wish to avoid (Figure 1). Other goals would include reducing the need for ionizing radiation and nephrotoxic contrast and to improve efficiency by reducing the procedure time. Finally, enhanced imaging may even permit novel catheter-based treatments for certain structural heart disorders for which there are no surgical or medical alternatives. 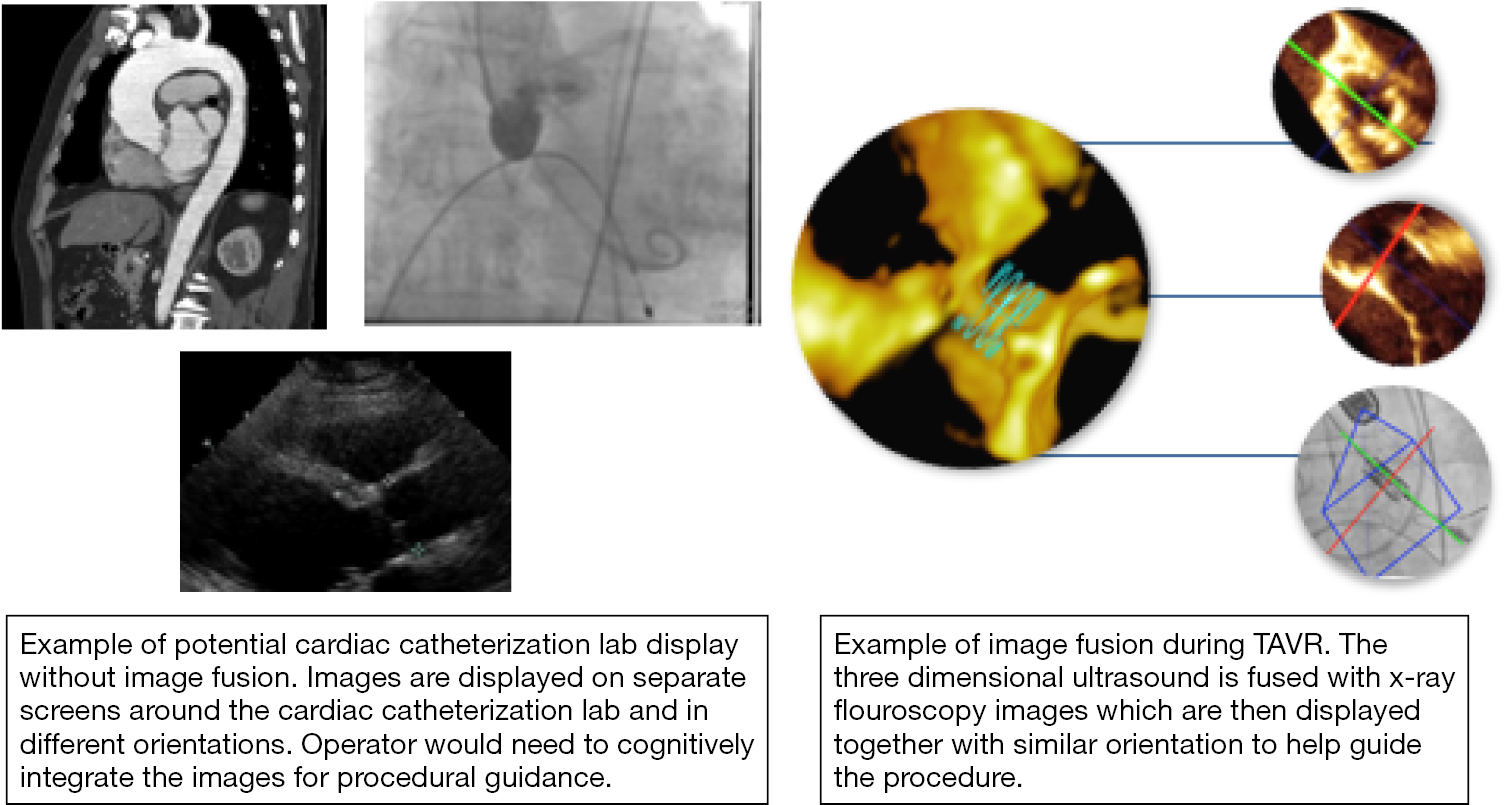 Goreczny et al. (7) report their single center initial experience using VesselNavigator (Phillips Healthcare, Amsterdam, The Netherlands) to co-register and overlay pre-acquired CT/MRI roadmaps onto live XRF using internal anatomic markers. Other commercially available products also perform 3D to 2D XRF fusion such as Siemens Healthcare (Syngo Fusion), General Electric (Innova Vision), and Toshiba (Smart Fusion). In the electrophysiology lab, CARTO sound and CARTO merge utilize EM-3D fusion to guide many interventions. Goreczny et al. performed 2D-3D co-registration for a heterogeneous mixture of pediatric interventions. Image based co-registration was performed using bony structures, calcifications, indwelling devices, or small volume contrast injections. When these experienced interventionalists judged that the co-registration was failing, re-registration was performed during the procedure. The registration was considered subjectively “accurate” in 89% of patients and required intraprocedural adjustment in 22% of patients. There was one patient where re-registration failed due to significant distortion of a vessel due to a large sheath. This paper makes an important contribution to a field that has extensive technical development literature, but is sorely lacking in real-world clinical experience.

Mis-registration is the #1 failure mode for all multi-modality fusion methods. Inaccurate initial registration suggests a failure of the registration method itself. For example, attempts at registration using affixed skin fiducial markers were unsuccessful in older patients whose skin sagged in unpredictable ways when positioned for MRI and then again for XRF (8). The VesselNavigator initialization method uses internal anatomic markers which is more robust method. However, mis-registration that occurs during the procedure occurs due to four elements: patient body motion, heart motion, respiratory motion and device-interaction with tissues. Fusion of XRF with real time imaging (e.g., 3D ultrasound) can overcome these intraprocedural registration errors as both modalities see the changes, however it is important that the imaging hardware of both modalities remain co-registered to function appropriately. Goreczny et al. reports that one in five cases needed to re-register during the procedure which is surprisingly high in a pediatric population, where patients are usually immobilized, deeply sedated and mechanically ventilated. One would infer that device-interaction with tissues is a significant contributor to intra-procedural mis-registration. In minimally-sedated awake adults who undergo structural heart procedures, unexpected respiratory motion (such as a cough or deep yawn) plus uncomfortable patients who unexpectedly adjust their body are another cause for mis-registration.

Several investigators have made critical advances in improving the cardiac cath-lab ecosystem. Co-registration and display of real-time US, EM, XRF plus static MRI, CT, 3D US road maps (and combinations thereof) have been described (Table 1). Methods for integration of respiratory and cardiac motion correction for MRI roadmaps have been studied in animal models (22). In addition, novel low radiation dose XRF methods for real-time 3D device tracking (23) and real-time 3D ultrasound to provide both anatomic and physiologic information (5) during interventional procedures are future directions of interest. We are not limited to fusion of only two modalities. There are examples of successful fusion of MRI, 3D US, and XRF for guidance of transendocardial injections in swine models (16). We hope one day to have a better interventional imaging eco-system where interventionalists are presented with sensible displays that reliably show devices and their 3D relationship to anatomic structures, where radiation and contrast dose is kept to a minimum and where physiologic consequences of the intervention is rapidly apparent. 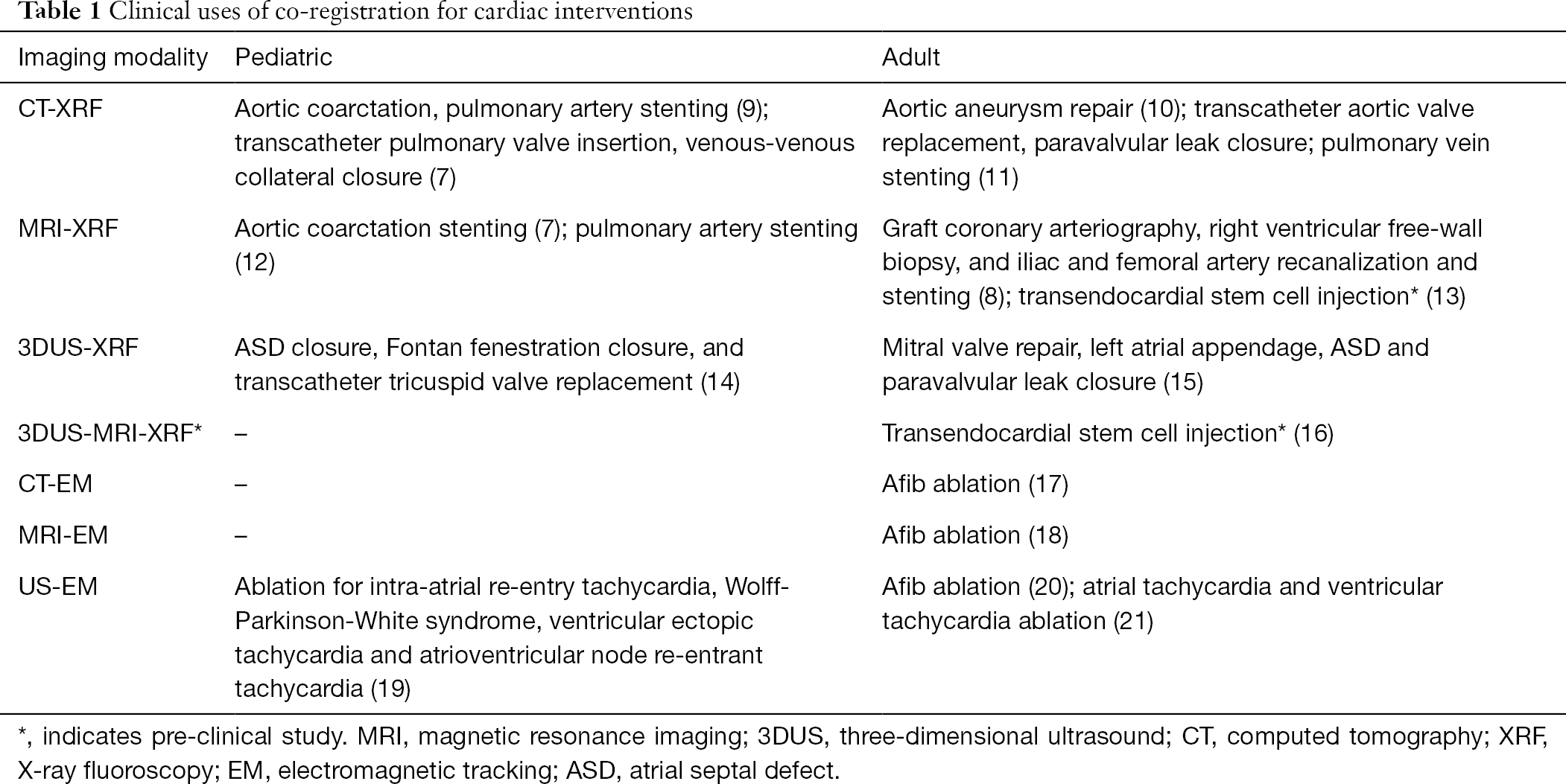 Conflicts of Interest: AN Raval and MA Speidel receive research support from Siemens Healthcare. BR Ciske has no conflicts of interest to declare.