Candida albicans is the most prevalent fungal species in the human microbiota. Alterations in host immunity, resident microbiota, stress, and other factors can lead to C. albicans overgrowth and subsequent disease ranging from superficial mucosal infection to disseminated candidiasis. Approximately 9.4% of bloodstream infections are caused by Candida (1). The latest guidelines on candidal infections, revised in 2009, recommend treating disseminated candidiasis with caspofungin, a common and effective antifungal (2). Resistance patterns are not well established but literature published after these guidelines have shown that resistance to standard treatment, including caspofungin, is becoming more prevalent. Epidemiologic data also indicate a rise in the rate of antifungal resistant strains that are being identified over time (3). Immunocompromised patients, especially those with neutropenia are most at risk for infection and subsequent mortality. Several case studies have described resistance in adult oncology patients, however resistant strains are not well documented in pediatric patients. We report a case of treatment-resistant disseminated candidiasis in an immunocompromised pediatric patient with T-cell lymphoma.

A 7-year-old female with mediastinal T-cell lymphoblastic lymphoma on consolidation chemotherapy per AALL 1231 protocol was admitted to the general pediatric floor for severe neutropenia and fever following completion of her latest round of chemotherapy. This included intrathecal methotrexate, and mercaptopurine and vincristine. Blood, urine, and sputum cultures were taken and she was initially started on empiric antimicrobial coverage with metronidazole, piperacillin-tazobactam, vancomycin, acyclovir, and intravenous fluconazole for mucositis. Continued fevers, abdominal pain, and one episode of hematemesis prompted an abdominal and pelvic computed tomography (CT) scan, which confirmed a diagnosis of neutropenic enterocolitis (typhlitis). She was subsequently admitted to the pediatric intensive care unit (PICU) for further management. The patient was made nil per os (NPO), a central line was placed for initiation of total parenteral nutrition (TPN), repeat blood and sputum cultures were sent, and fluconazole was changed to caspofungin after two days for broader antifungal coverage. Her initial cultures were negative at this time. On day 3 of her PICU admission, she required intubation for respiratory decompensation and was also started in continuous renal replacement therapy (CRRT) after becoming anuric. Her blood pressure became labile requiring vasopressor support. As her clinical picture was concerning for undertreated fungal infection, a Fungitell and a bronchial culture were collected on PICU day seven and caspofungin was changed to voriconazole to cover aspergillus. Two days later, her Fungitell became positive at >500 pg/mL and infectious disease was consulted. The initial bronchial culture and gram stain were negative, however a repeat bronchoalveolar culture on PICU day ten grew 5,000 colony forming units (CFU) of C. albicans. Unsure if this was a contaminant or causative agent, we continued with voriconazole treatment at that time. Her respiratory status improved and she was extubated on day thirteen.

On PICU day 42 she acutely decompensated, went into cardiorespiratory failure and died. Microscopic sections observed at autopsy demonstrated both yeast and pseudohyphae-like structures, most suggestive of Candida species, disseminated throughout her lungs, heart, kidneys and spleen (Figures 1,2). While her previous CT scans did indicate suspicion of pneumonia, there was no evidence of other organ involvement on imaging. Her liver enzymes had shown steady improvement at time of death, following her switch to caspofungin. 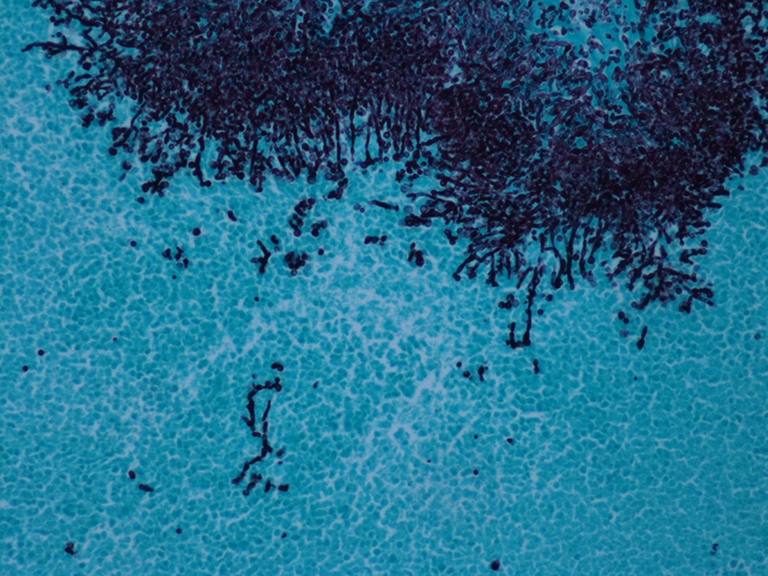 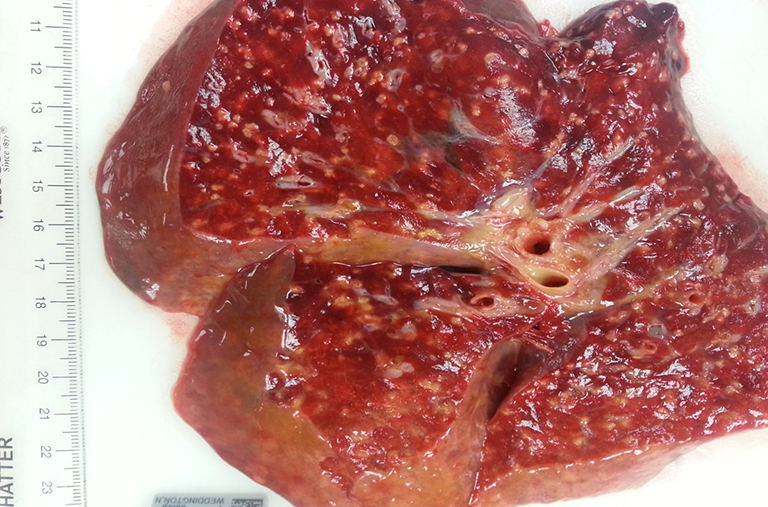 Candidemia and disseminated candidiasis are often associated with immunodeficiency, central venous catheters, parenteral nutrition, and admission to the intensive care unit, but resistance patterns are poorly documented in children (1,4,5). The Infectious Disease Society of America (IDSA) guidelines on Candida infections most recently revised in 2009 suggest that liposomal amphotericin or echinocandins, like caspofungin, are first line treatments, however, resistance has been reported in only a few case studies in adults, but not in children. Fungi and molds are able to develop resistance to antimicrobials just like bacteria (6). Epidemiologic studies have found echinocandin resistance in 0.1% of isolated strains among adults with cancer. Susceptibility of some Candida species to caspofungin has increased in recent years from 0.5% in 2001 to 3.1% in 2009 (3,7). Furthermore, the accepted minimum inhibitory concentration (MIC) of ≤2 mcg/mL may actually misclassify some resistant strains as susceptible which actually may be resistant when more sensitive epidemiologic cutoff values are applied (3).

The overall mortality rates of Candida infections can be as high as 35.6% in treated cases (8). C. albicans is the most common species implicated, however, infections with other Candida species are increasing in prevalence (8). These species include C. glabrata, C. parapsilosis, C. tropicalis, and C. krusei. The exact species of Candida in this patient was not identified post mortem, however the only culture that was positive while she was alive was a bronchoalveolar lavage (BAL) culture which grew 5,000 CFU of C. albicans. In light of twenty negative blood cultures throughout her admission, it was reasonable to question this finding as a commensal organism as spores of this very common organism are commonly inhaled leading to false positives in non-neutropenic patients. Such samples should be examined under microscope before considered true positive results. Absence of branching hyphae usually indicates contamination. Poor laboratory technique is another potential cause of positive cultures (9).

The typical treatment regimen for candidemia and disseminated candidiasis with caspofungin is 70 mg/kg loading dose followed by 50 mg/kg daily for 2 weeks past sterile cultures along with improvement in symptoms per IDSA guidelines (8). We fulfilled these criteria in this patient given her clinical improvement and subsequent negative bronchial culture. In this case, choice of antifungals was influenced by evolving liver and kidney function. Her renal failure made amphotericin B an unacceptable choice and voriconazole likely contributed to her elevated liver enzymes. There are several reported cases of chronic disseminated candidiasis (CDC) in adults with acute myeloid leukemia (AML), typically a childhood cancer, which failed treatment with liposomal amphotericin, azoles, and caspofungin, but responded to micafungin and posaconazole with favorable side effect profiles (10). Micafungin has also been shown to be a successful prophylactic in pediatric populations (11).

Classically, CDC presents with intermittent high fevers and abdominal tenderness in previous neutropenic patients, which is in keeping with our patient. CDC typically infiltrates the liver, spleen and kidneys as was the case in our patient. Associated laboratory findings can include elevated alkaline phosphatase, which our patient never had. Elevated GGT has been described in about 50% of oncology adults with CDC (12). Blood cultures are only positive in about 20% of cases and are therefore not dependable (12). Definitive diagnosis of CDC is made by liver biopsy. MRI is also described as being very sensitive and specific in detecting fungal inclusions and may have a role in disease monitoring once on effective treatment (13). Our patient’s tenuous course and reliance on CRRT and the ventilator did not make her a good candidate for either of these tests.

We present the case of treatment resistant disseminated candidiasis in an immunocompromised pediatric patient. While final speciation or antifungal resistance testing of the Candida found on autopsy was unfortunately not performed, in light of the long courses of antifungals including those indicated by the IDSA guidelines, we believe it is reasonable to consider this was a resistant strain of Candida. Considering resistant Candida strains in future cases of CDC and utilizing knowledge of alternative agents could improve survival in these patients, especially in patients limited by multi-organ failure. Another limitation of treatment in such cases is the length of time required for fungal resistance tests to be conducted, when immunocompromised patients are struggling to fight these infections. Further epidemiologic studies of fungal resistance patterns may aid in antifungal selection, which could translate to improved survival rates in such patient.

Informed Consent: It was waived as it was not required in the writing of this article. Case data has been entirely de-identified from person, location, and date.