Pediatric ocular trauma is an important cause of visual loss. Six million children experience an episode of ocular trauma every year (1,2). Five percent of injured children (approximately 280,000) require hospital admission (1), and one-fourth of them suffer an open globe injury (OGI) (3). While ocular trauma is rarely fatal, wounded children have to live with visual impairment throughout their lives. Ocular trauma also places a significant socioeconomic burden on their families (4). However, 90% of pediatric trauma is preventable (5).

Caregivers are responsible for protecting children from hazardous behaviors. However, it was estimated that 61 million children in China were left behind in rural areas and had insufficient tutelage by their parents who migrated to big cities for higher incomes and better education opportunities (6). These children are termed as left-behind children (LBC) (2,7). The growing number of LBC leads to a variety of social problems and draws increasing attention from the socialists and the governments (8). Compared with children living with their parents (non-LBC), LBC have worse school performance (9), worse physical health (10), poorer behavior (11,12), and a higher risk of injury (11,12).

The present study enrolled a consecutive series of children with OGI treated by vitrectomies. The aim of this study was to: (I) describe the etiologies and risk factors of pediatric OGI; (II) compare LBC with non-LBC in terms of clinical features and visual prognosis; and (III) make suggestions for the prevention of pediatric OGI.

We present the following article in accordance with the STROBE reporting checklist (available at http://dx.doi.org/10.21037/tp-21-162).

This was a prospective case series of 96 consecutive OGI children seen at the Eye and Ears, Nose, and Throat (ENT) Hospital, Fudan University, Shanghai, China. All the patients were diagnosed and operated on between June 2015 and June 2019. Permission for medical record review was obtained from the institutional review board (IRB) of the hospital. This study was conducted in accordance with the ethical standards stated in the Declaration of Helsinki (as revised in 2013) and was approved by the IRB/Ethics Committee of the Eye and ENT Hospital of Fudan University (NO. KJ2009-16). Informed consent for the research was obtained from all the guardians.

All children included in this study were treated by pars plana vitrectomy (PPV). Exclusion criteria included age over 18 years old, close ocular trauma, history of eye diseases or intraocular surgeries, hereditary eye diseases, congenital dysplasia of the eyeball or the orbit, or follow-up less than 12 months.

Definition of LBC and non-LBC

According to previous studies (2,7), LBC were defined as “children under 18 who have been left behind at their original residence while one or both parents migrate into other places for work and have been not living together with them for at least six months”. Non-LBC were defined as “children under 18 who live with both parents at their original residence” (2,7).

All children underwent a group of bilateral ophthalmic examinations, including slit lamp biomicroscopy, indirect ophthalmoscopy, and intraocular pressure. Computed tomography (CT) was performed if an intraocular foreign body (IOFB) was suspected. Visual acuity (VA) was measured using the Snellen E chart. Based on the system for classifying mechanical injuries of the eye (13), the zone of injury was defined by the location of the most posterior aspect of the ocular laceration. Younger children might be frightened and might not cooperate at first. They were placed in a quiet room with their caregivers who tried to soothe the children along with the ophthalmologist and the nurse. Examination was not performed until the children calmed down and cooperated with the procedures.

Many daily instruments might be harmful to children. In the present study, injury sources were divided into 2 groups. (I) Children’s instruments: some ordinary harmless devices such as stationary or toys, including pencils, badminton, basketball, compasses, football, plastic sticks, and rulers etc. (II) Adult instruments: some dangerous or sharp tools which should be routinely prohibited from children might be occasionally misplaced and taken by children, such as knives, iron wire, needle, scissors, wooden stick, iron nail, toothpick, stone, branch, car accident, firecracker, glasses, iron scrap, and syringe etc.

The OTS, described by Kuhn et al. (14), is a simplified categorical system for standardized assessment and predicting visual prognosis in ocular trauma, suitable for both children and adults. Six baseline variables, including VA, rupture, endophthalmitis, perforating injury, retinal detachment, and afferent pupillary defect, were summated and converted into 5 OTS grades. Each OTS grade projected the probabilities of a range of visual outcomes.

All injuries had primary wound repair within 8 hours from the initial administration. Intravenous antibiotics (ceftazidime, 30 mg/kg, twice per day) before and after surgery were used if endophthalmitis was highly suspected. PPV was considered for 1 of the 4 complications, including (I) retained intraocular foreign body (IOFB), (II) endophthalmitis, (III) retinal detachment, and (IV) non-clearing vitreous hemorrhage for 1 week.

Surgeries were performed under general anesthesia. The 23-gauge PPVs (Constellation, Alcon Laboratories Inc., Fort Worth, TX) were performed by Z.S. or R.J. During surgery, posterior vitreous detachment was induced and the posterior hyaloid was removed. The peripheral retina was examined with scleral depression for possible lesions. Eyes with dense cataracts (either traumatic cataract or complicated cataract by intraocular inflammation or hemorrhage) were treated by phacoemulsification (Constellation). Implantation of foldable intraocular lens (IOL) (AcrySof, Alcon Laboratories Inc.) was not performed in the one-stage operation but was considered 1–2 months later, depending on the retinal structure. Amblyopia treatment was carried out before and after IOL implantation. Eyes with endophthalmitis were given intraocular antibiotics (0.8 mg/mL × 0.1 mL norvancomycin and 2.25 mg/mL × 0.1 mL ceftazidime). In cases of giant retinal breaks, retinal detachment, severe endophthalmitis, or marked ciliary body fibrosis, intraocular silicone oil tamponade was performed. The silicone oil was not removed until stable retinal attachment was achieved. If the retina remained detached or re-detached during the surgery, silicone oil tamponade was performed once more. IOFBs were removed with 18-gauge IOFB forceps (nonmagnetic IOFB) or with an intraocular magnet (magnetic IOFB) through the corneal or scleral wound.

Statistical analyses were performed using SPSS 20.0 (IBM Corp, Armonk, NY, USA). Multiple linear regression analysis was used to select possible preoperative conditions that significantly influenced the visual prognosis. Comparisons of age, VA, OTS scores, or primary hospitalization time (PHT) between LBC and non-LBC were analyzed by the Mann-Whitney U test. The chi-square test was used to compare zones of injury, the number of surgeries, silicone oil tamponade, cataract removal, IOL implantation, and injury sources between LBC and non-LBC. The Wilcoxon signed ranks test was used to compare preoperative and postoperative VA. The nonparametric Spearman’s test was used for the establishment of correlations. 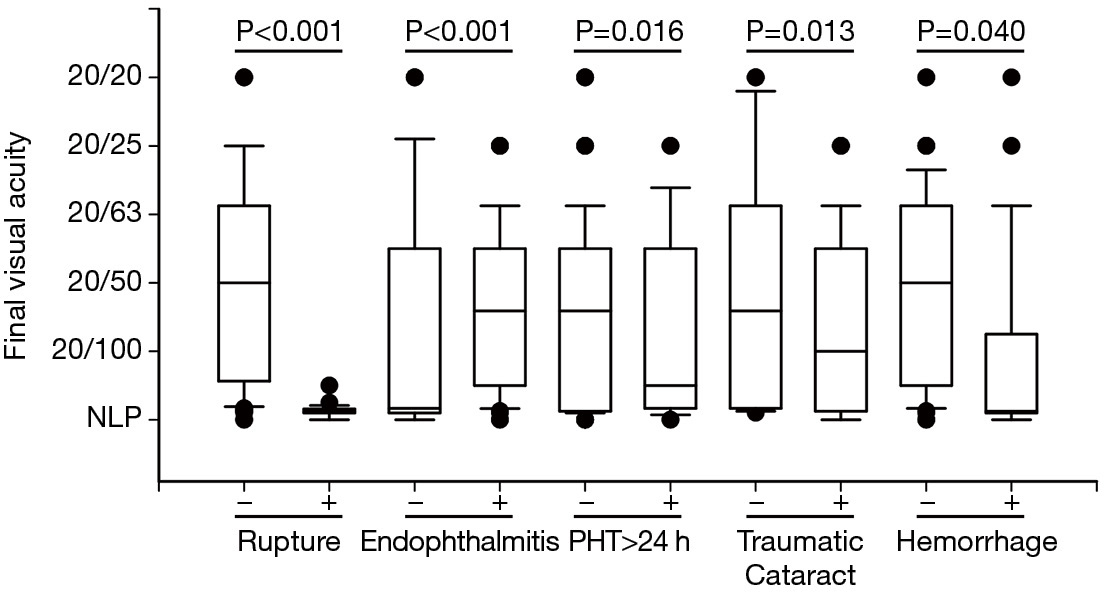 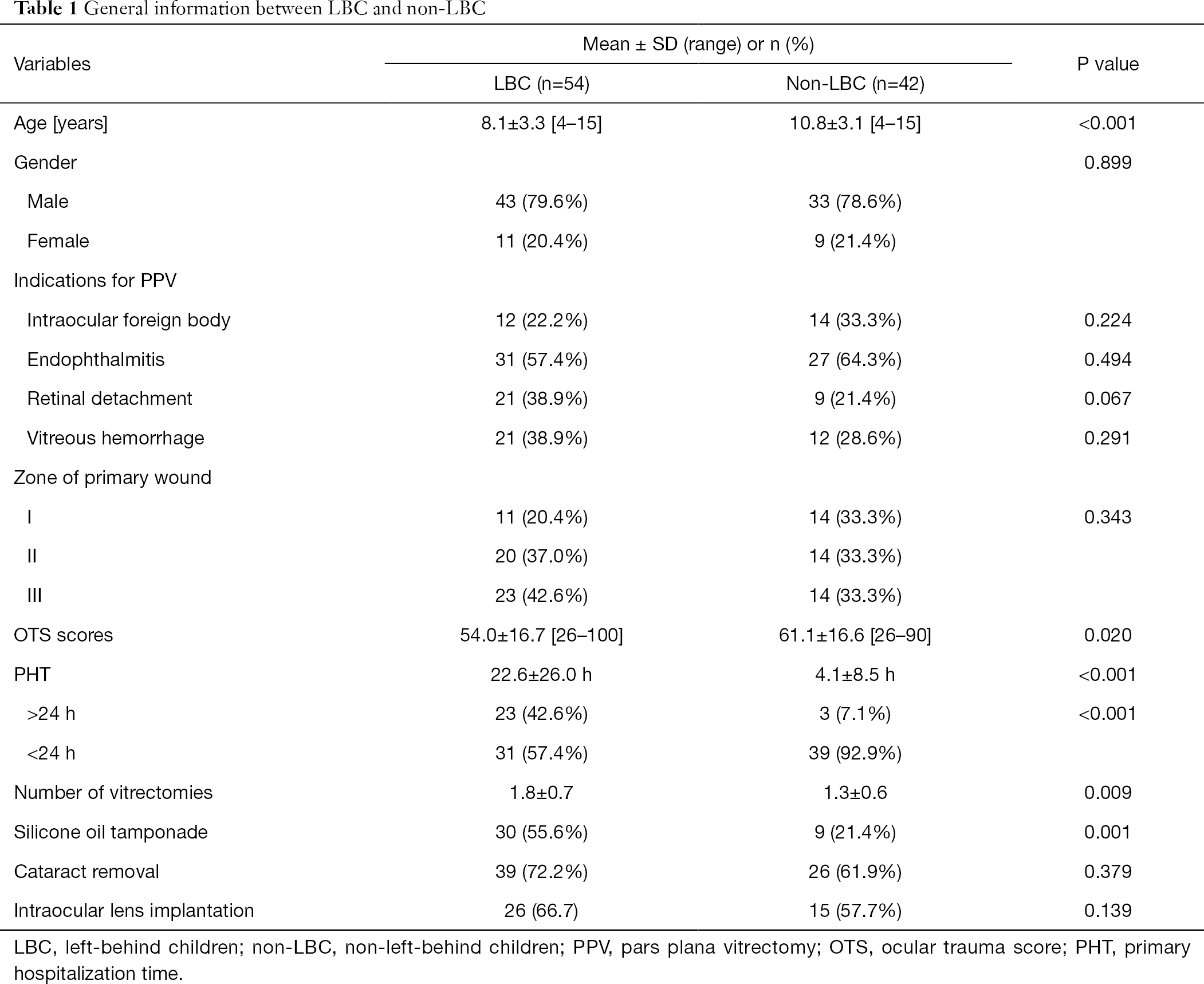 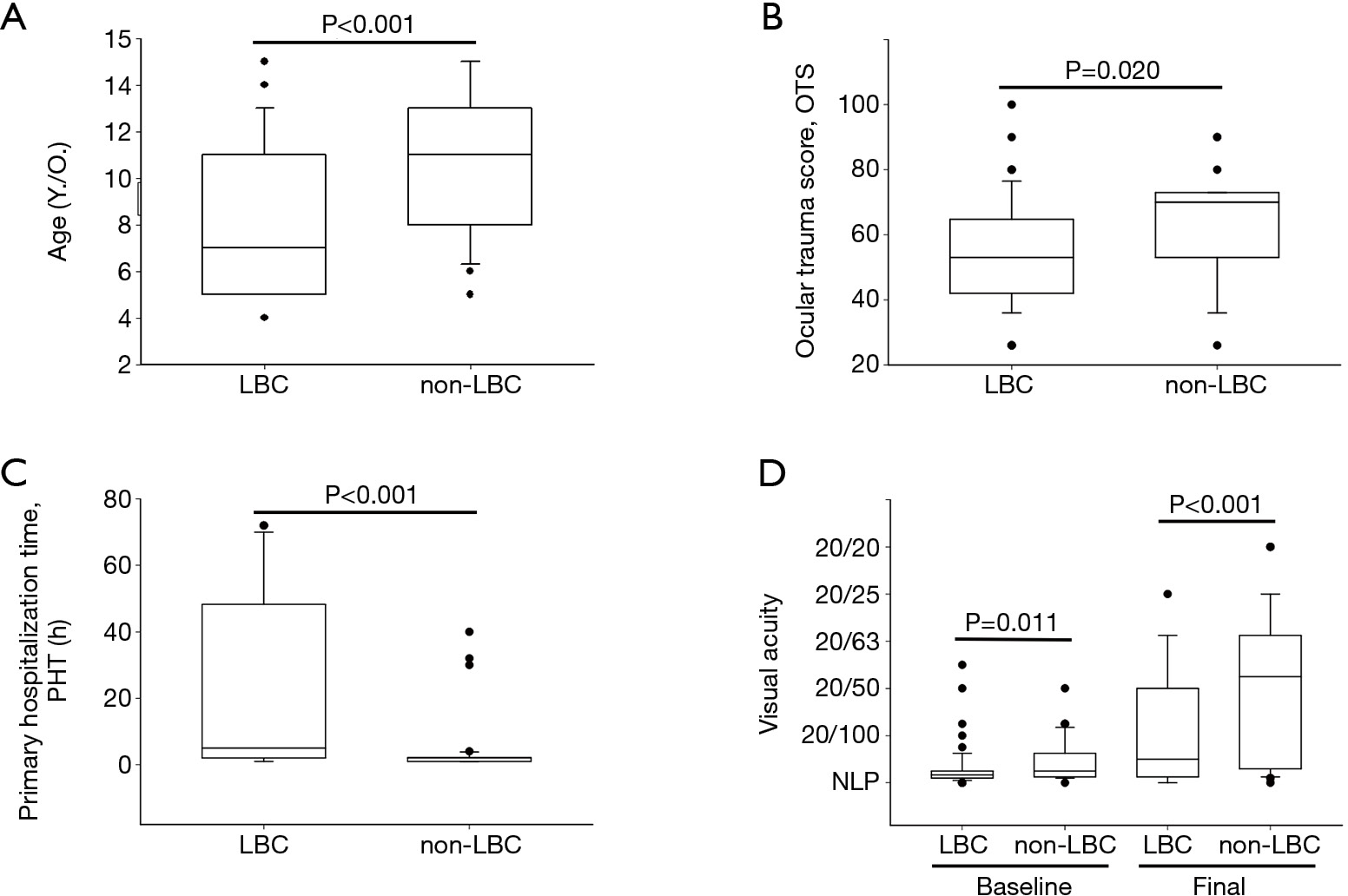 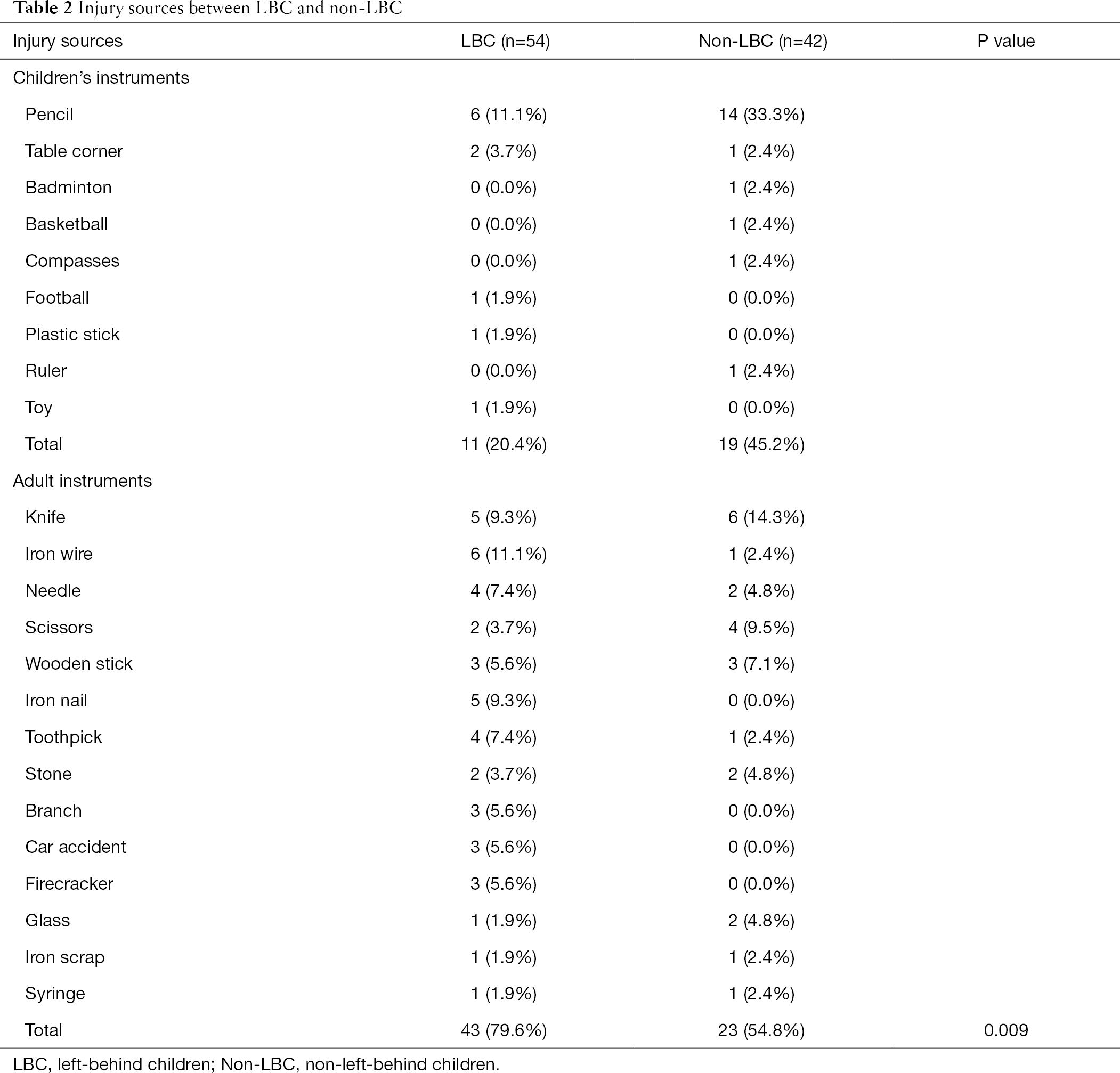 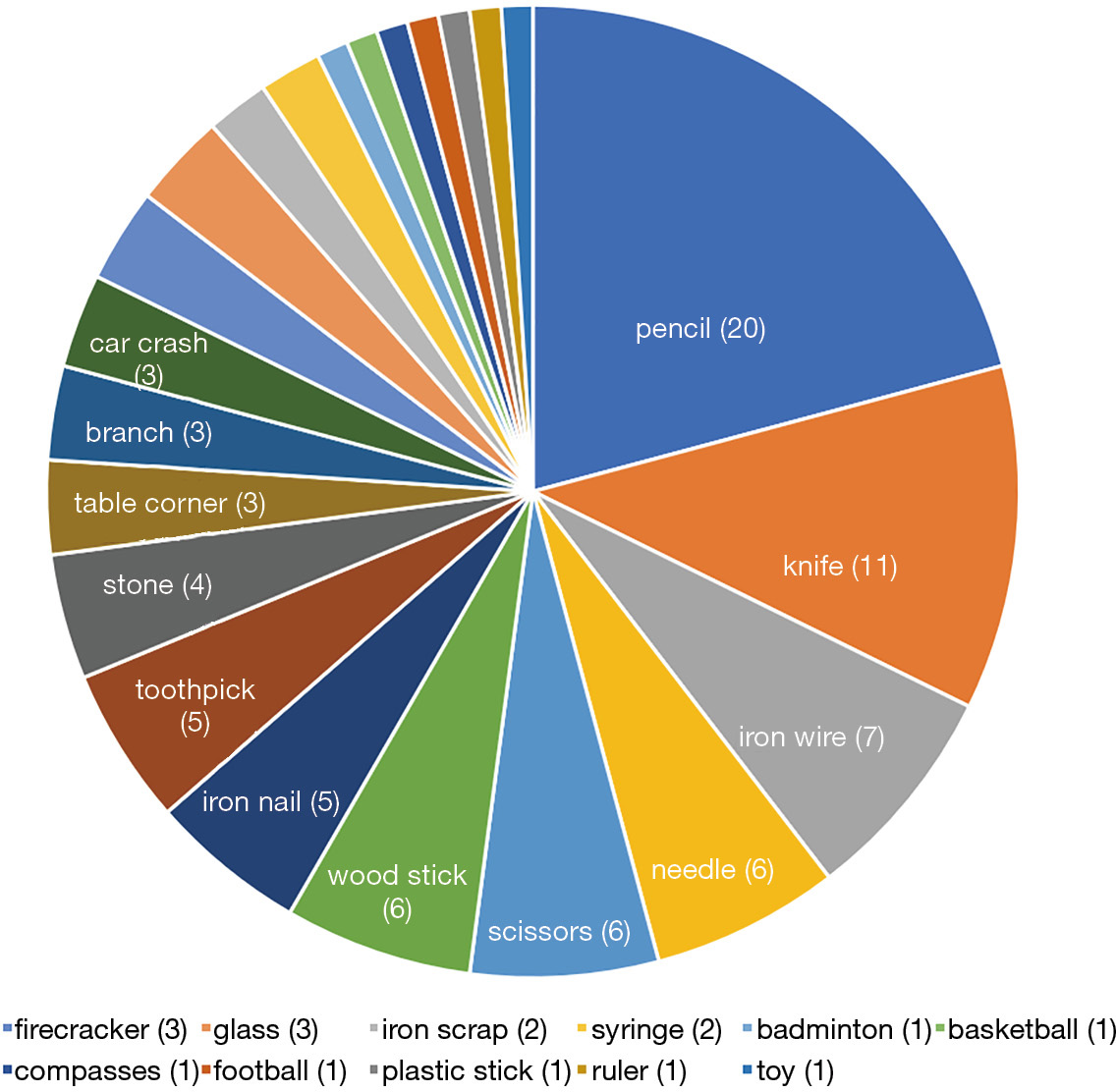 The OTS evaluates ocular trauma by analyzing several baseline factors including VA, eyeball rupture, endophthalmitis, retinal detachment, and relative afferent pupillary defect (RAPD) (14). A higher OTS score always predicts better visual prognosis (14-17). Similarly, our results suggested that both OTS scores and grades were predictive markers of final VA. Diseases such as eyeball rupture, endophthalmitis, or vitreous hemorrhage were independent factors predisposing patients to poor visual recovery (Figure 1). Another system, the pediatric penetrating ocular trauma score (POTS) (18), was introduced for children whose baseline VAs or RAPD could not be obtained. Children in this study were 4 to 15 years old. Confrontation with the ‘white coat’ probably made some children scared and uncooperative. They were placed in a quiet room with their guardians until they calmed down and cooperated with the examination. We tried to obtain preoperative VA and RAPD of all children. OTS was a reliable prognostic tool for pediatric open globe injury (OGI) (19).

In the present study, it took significantly more time for LBC to reach the emergency room after injuries than non-LBC (22.6 versus 4.1 hours). Twenty-three (42.6%) LBC compared with 3 (7.1%) non-LBC had PHT over 24 hours. At least 3 causes may explain why LBC had longer PHT. (I) Age: LBC in this study were younger and might be reluctant or unable to tell their guardians about the injury soon after they were hurt. (II) Supervision: negligence of the caregivers might be another cause of delayed hospitalization. Families of LBC were incomplete and provided inadequate parental supervision (20). Initial detection of the injury by the caregivers might be delayed. (III) Place of residence: in this study, LBC came from remote areas. It took them hours or even days to get to our hospital. Delayed hospitalization was correlated with poorer visual prognosis (Figure 1), indicating the importance of early treatment for OGI children.

Over half of our patients were injured by adult instruments (Table 2). Sharp instruments, such as iron wires, knives, needles, scissors, iron nails etc., are tools for adults. Curious children might play with these dangerous tools and accidentally hurt themselves or their playmates. LBC were much younger and had less safety consciousness than non-LBC. Hence, they were more likely to be injured by adult instruments. These injuries could have most likely been avoided if the caregivers properly kept these dangerous tools in safe places away from the children.

We also found that pencils accounted for the greatest number of injuries (20 cases, 20.8%) (Table 2 and Figure 3) and IOFB cases (14 cases, 53.8%). The role of writing devices in pediatric eye injury has also been addressed by other researchers (23,24). Unlike adult instruments, it is impractical to simply deprive children of writing devices. For ophthalmologists, penetrating eye injury should be highly suspected when confronting a child injured by a writing instrument. It is necessary to educate caregivers/parents, children, and educational staff about the potential dangers of the seemingly innocuous writing devices. Children should be taught to correctly use the stationary, especially those with sharp edges or pointed ends.

Taken together, the prognosis of pediatric OGI was worse in LBC than in non-LBC. It is necessary to find effective interventions to improve the guardianship of LBC. Many tragedies may be avoided if adult instruments are properly stored and if children are educated to properly use writing devices.

Funding: This work has been supported by the National Natural Science Foundation of China (No. 81700851), the Shanghai Key Laboratory of Visual Impairment and Restoration (Fudan University, Shanghai 200031, China), by a grant from Science and Technology Commission of Shanghai Municipality (16411953700), and by a grant from Shanghai Hospital Development Center (No. SHDC12016116). The funding organizations had no role in the design or conduct of this research.

Reporting Checklist: The authors have completed the STROBE reporting checklist. Available at http://dx.doi.org/10.21037/tp-21-162

Conflicts of Interest: All authors have completed the ICMJE uniform disclosure form (available at http://dx.doi.org/10.21037/tp-21-162). The authors have no conflicts of interest to declare.

Ethical Statement: The authors are accountable for all aspects of the work in ensuring that questions related to the accuracy or integrity of any part of the work are appropriately investigated and resolved. This study was conducted in accordance with the ethical standards stated in the Declaration of Helsinki (as revised in 2013). The study was approved by the Research Ethics Committee of the Eye and ENT Hospital of Fudan University (NO. KJ2009-16). Informed consent for the research was obtained from all the guardians.