Sepsis and prematurity are the most important causes of neonatal disability and death worldwide (1). According to the age of onset, it is divided into early-onset neonatal sepsis (EONS; aged ≤72 h) and late-onset neonatal sepsis (LONS; aged >72 h), intrauterine inflammation is the significant leading risk factor of EONS (2). The combination of premature birth and sepsis leads to a series of sequelae, including broncho-dysplasia, retinopathy, cerebral palsy, low intelligence, and autism (3-5). Unlike adults, cerebral blood flow in newborns is characterized by pressure passivity, and a slight fluctuation in cerebral blood flow may lead to intracranial hemorrhage or ischemic cerebral damage. The mechanism of cerebral damage caused by sepsis through the destruction of the blood-brain barrier and direct or indirect injury by inflammatory factors (6,7). Blood cultures are the gold independent standard to confirm the diagnosis (8,9); however, due to their time-consuming and low positive, objective indicators are urgently needed for monitoring and diagnosis during EONS. Due to incomplete development of the blood-brain barrier in premature infants, brain blood flow passively changes and vulnerability to fluctuations, resulting in hemodynamics changes under the influence of toxins and inflammatory factors in the course of sepsis. Previous studies on EONS were performed giving results of significantly lower resistance, vasodilatation, and higher blood flow were noted in all the cerebral arteries of the sepsis group (10). IL-6 can be used as independent biomarker to confirm the diagnosis of EONS within 6 hours after birth (11). We hypothesized that hemodynamic changes are associated with IL-6. We sought to study whether cerebral blood flow had clinical diagnosis value and whether it can be further used to predict neurological sequalae in preterm infants EONS. We present the following article in accordance with the STARD reporting checklist (available at https://tp.amegroups.com/article/view/10.21037/tp-22-269/rc).

The study was conducted in accordance with the Declaration of Helsinki (as revised in 2013) and was approved by the Ethics Committees of the Renmin Hospital of Wuhan University and Hubei General Hospital (No. 20190695). Informed consent was taken from all the patients’ legal guardians.

Data were collected from 86 preterm infants

A total of 86 preterm infants, at the Department of Neonatology, Renmin Hospital of Wuhan University from January 1, 2019 to March 31, 2021, were enrolled in this retrospective study. These patients were allocated into the following 2 groups: (I) the EONS group (G1, n=41); and (II) the normal control group (G2, n=45). All the preterm infants were hospitalized at the Neonatal Intensive Care Unit (NICU) within 2 hours of birth. Sex, birth weight, and gestational age did not differ significantly between G1 and G2 (see Table 1). The patients in G1 met the diagnostic criteria for EONS and had a primary diagnosis of EONS (12). Cases in the EONS group met the following diagnostic criteria for sepsis (12): (I) the suspected cases had any of the following features within three days of being born: (i) with abnormal clinical manifestations; (ii) the mother had chorioamnionitis; (iii) with premature rupture of membranes (PROM) ≥18 hours before the onset of the contractions. If there was no abnormal clinical manifestation, blood culture was negative, and two consecutive blood non-specific tests (with a 24-hour interval) showed less than two positive results, the possibility of sepsis was ruled out. (II) A clinical diagnosis was made if a patient had abnormal clinical manifestations and meanwhile met any of the following criteria: (i) blood non-specific test showed two or more positive results; (ii) cerebrospinal fluid test revealed purulent meningitis; (iii) bacterial DNA in blood. (III) A diagnosis of EONS was confirmed if there were typical clinical manifestations of sepsis and positive findings in blood/cerebrospinal fluid (or other sterile cavity fluid) cultures. Patients who had received antibiotics, had an obvious deformity or an Apgar score <7 were also excluded from this study.

General data of patients in G1 and G2

All the patients were examined using the same bedside ultrasound GE (Logiq E9) instrument. The probe was scanned through the anterior fontanelle and the transverse plane of the middle cranial fossa was scanned and clearly showed the anterior cerebral artery (ACA), middle cerebral artery (MCA), and posterior cerebral artery (PCA). Taking the blood flow spectrums of 3–5 cardiac cycles, the parameters of ACA, MCA, and PCA were obtained, including the PSV, MV, and end diastolic velocity (EDV) (cm/s), RI and PI. All examination reports were performed and recorded by the Department of Fetal Ultrasound, People’s Hospital of Wuhan University. The preliminary data were collated.

Blood samples were collected within 6 hours of birth. Generally, IL-6 increases within 2 hours and peaks in 4–6 hours of infection. Thus, we checked patients’ IL-6 blood cultures. Blood cultures were inspected by 24 hours early warning, 72 hours preliminary reporting and 120 hours Official results. IL-6 was determined by enzyme-linked immunosorbent assays (ELISAs). All the tests were performed by the Clinical Laboratory of the People’s Hospital of Wuhan University.

EXCEL2019 software was used to input data and Stata15.0 and SPSS26.0 software was used for data analysis. Before conducting independent sample t-test, Levin homogeneity test of variance was required for the data. The indexes ACA.PSV, ACA.EDV, PCA.EDV, ACA.VM, MCA.VM, Pca. VM, MCA.PI, PCA. PI and IL-6 need t-test, and the rest indexes need t-test. The receiver operating characteristic (ROC) curves were drawn, and the sensitivity, specificity, and areas under ROC curves (AUCs) were compared to evaluate the diagnostic value of each index. The pairwise comparisons of the ROC curves were on theMedCalc18.2.1 software.

Comparison of outcomes between the 2 groups

The homogeneity of variance of the data was first analyzed by an independent sample t-test, (see Table 2). If the P value was <0.05, then a t-test was required. According to the results, t-tests were performed for the MCA, PSV, PCA, and RI. A P value <0.05 was considered statistically significant (see Table 3).

Homogeneity of variance tests of the data for G1 and G2

Independent-samples t-tests for G1 and G2

AUROCs of the indexes of different intervals 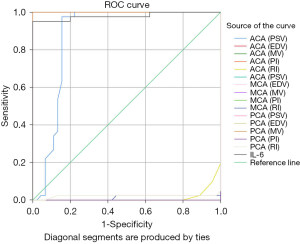 Outcome of the study

In this retrospective study, we found that hemodynamic alteration is a good early index for EONS. Our findings are of great clinical significance. Little domestic and foreign research has been conducted on cranial hemodynamic changes of EONS. EONS is a serious infection during the neonatal period, and the risk of morbidity and mortality increases as gestational age decreases (13). The incidence of premature infants is as high as 16.4–36% (14), and about 2.76 million newborns die of sepsis every year (15). The incidence of surviving with irreversible neurological sequelae is 20–50%, which imposes heavy burdens on society and families (16). Early diagnosis and treatment are the basis for the successful treatment of sepsis (17). Blood cultures are recognized as the gold standard for the diagnosis of sepsis, and biomarkers for clinical auxiliary diagnoses, such as procalcitonin (PCT), c-reactive protein (CRP) and IL-6, have their limitations (11,18). The clinical manifestations of sepsis in premature infants are non-specific but critical; however, biomarkers such as CRP, PCT and IL-6 cannot directly predict neurological sequelae. Thus, we attempted to monitor cerebral hemodynamic changes in early sepsis and evaluate the effect of these changes on the prognosis of the nervous system.

In this retrospective study, we found that the PSV, EDV, and MV were significantly higher in G1 and the G2, while RI and PI were significantly lower in G1 than G2. Thus, we speculated that in the early stage of EONS, the release of inflammatory factors leads to cerebral vasodilation, a reduction in vascular resistance, a reduction in pulsation, and an increase in blood flow. Unlike in adults, who have a perfect mechanism for the autonomous regulation of cerebral blood flow, neonatal cerebral blood flow is characterized by pressure passivity; thus, brain tissue is highly sensitive to fluctuations of cerebral blood flow, and slight increases or decreases in cerebral blood flow can lead to intracranial hemorrhage or ischemic brain injury (19). Premature infants, especially those aged <32 weeks, have an immature granular layer of the embryonic germinal matrix under the ependymal surrounding ventricle, an immature vascular network lacking collagen, and a small vein “U”-shaped system, which can easily result in intracranial hemorrhages when blood flow fluctuates and blood pressure changes. Cerebral hemodynamic changes affect the cerebral blood flow rate, and a study abroad has shown that vascular lesions within a few hours are closely related to acute and chronic neural injury (20). During EONS, cerebral blood flow increases because of increases in the PSV and decreases in the RI and PI, which eventually lead to an increased risk of intraventricular hemorrhage; thus, hemodynamic changes may play a key role in the neurological processes involved in sepsis.

IL-6 can be used to diagnose early-onset sepsis at an extremely early phase (11). Our AUROC analysis showed that the EDV and MV of the ACA, and the PSV, EDV, and MV of the MCA and PCA had a higher sensitivity than IL-6. Additionally, this study clearly revealed a diagnostic threshold. Thus, hemodynamic changes can be monitored to achieve the early diagnosis of EONS in premature infants. Given their clear diagnostic thresholds, these hemodynamic indicators have high clinical diagnostic value, and they are objective, non-invasive, operable at the bedside, and repeatable. Thus, cerebral hemodynamic changes can be used in the timely preliminary diagnosis of EONS. This is particularly critical for clinical sepsis treatment, as a 1-hour delay in making a correct diagnosis results in a 7.6% increase in mortality (21,22). As cerebral hemodynamic changes are easily induced by pressure passivity, abnormal cerebral hemodynamic changes not only predict the pathological changes in the acute stage but may also predict long-term adverse consequences. It was found that during EONS, increased intracranial blood flow is more likely to lead to neurological damage in preterm infants; thus, the provision of hemodynamic stability to prevent early and late neurological sequalae should also be considered in treatment regimens.

This study showed that due to its high diagnostic sensitivity and definite diagnostic threshold, transcranial ultrasound hemodynamic changes should be used to diagnose EONS; however, a further large sample size multi-center study needs to be conducted, and further follow-up studies and analyses need to be conducted to confirm our findings.

Reporting Checklist: The authors have completed the STARD reporting checklist. Available at https://tp.amegroups.com/article/view/10.21037/tp-22-269/rc

Conflicts of Interest: All authors have completed the ICMJE uniform disclosure form (available at https://tp.amegroups.com/article/view/10.21037/tp-22-269/coif). The authors have no conflicts of interest to declare.

Ethical Statement: The authors are accountable for all aspects of the work, including ensuring that any questions related to the accuracy or integrity of any part of the work have been appropriately investigated and resolved. The study was conducted in accordance with the Declaration of Helsinki (as revised in 2013) and was approved by the Ethics Committees of the Renmin Hospital of Wuhan University and Hubei General Hospital (No. 20190695). Informed consent was taken from all the patients’ legal guardians.