Recombinant human growth hormone in the treatment of C.836A/G-caused short stature in a girl: a case report and literature review

Short stature (also referred to short stature) refers to individuals of the same race, sex and age whose height is less than 2 standard deviations (-2SD) of the average height of the normal population, or less than the 3rd percentile, under similar living environment (1). At present, the incidence of short stature is 2–3%, and the treatment for short stature is not satisfying (2). The major factors causing short stature include variations in genes and chromosomes or a loss of growth space due to environmental, nutritional, disease, endocrine, and other changes (1). Among the above factors, chromosomal abnormalities or single-gene defects are the more common reasons for the occurrence of short stature (3). C.836A/G means that heterozygous missense mutations occur in coding exon 7 of the PTPN11 gene, causing the transformation of amino acid 279 from tyrosine to cysteine (p.Y279C). It has been reported that C.836A/G results in the occurrence of LEOPARD syndrome in 5-year-old children, which affects the growth and development of those children (4).

All procedures performed in this study were in accordance with the ethical standards of the institutional and/or national research committee(s) and with the Declaration of Helsinki (as revised in 2013). Written informed consent was obtained from the patient’s parents for publication of this case report and accompanying images. A copy of the written consent is available for review by the editorial office of this journal.

A female child aged 5 years and 5 months old was treated at our hospital for growth retardation of >5 years. The child, who was delivered at 36 weeks of gestation due to inadvertent wrestling, had a birth weight of 3.6 kg and a birth length of 50 cm. Some 5 years after her birth, the growth rate of the child was slower than that of normal children, and the child had a height of 71.5 cm at 1 year of age, 82.5 cm at 2 years of age, and 104.6 cm at 5.5 years of age. Additionally, the child was a slightly picky eater, had good sleep quality (she often fell asleep after 21:00), and did not exercise much before the age of 3–4 years.

The child had 1 incident of choking on milk at birth in the hospital, and the respiratory tract was treated routinely without other special treatment. During breastfeeding, the child suffered multiple apneas (without cyanotic manifestations), which recovered after the flapping stimulation of the mother, and after 30 days, the similar conditions disappeared. The child first began to be fed complementary foods at 6 months of age and transitioned to general foods after the age of 1 year. Approximately 1 month after birth, a patent foramen ovale was found in the child during hospitalization due to jaundice. Afterwards, the child underwent multiple echocardiographic examinations, and was found to have a local thick interventricular septum and mild tricuspid regurgitation. At the age of 2 years and 7 months, an echocardiographic examination revealed the spontaneous closure of the foramen ovale. During the period of the examination, the child did not complain of discomfort. After birth, the child failed to pass a hearing test in both ears, and was diagnosed with nerve deafness but did not receive any special treatment. The child was able to communicate normally, and her life and learning were not affected.

A physical examination was performed on the child, and the results showed normal intelligence, wide eye distance, and a great many freckles with a diameter about 2–5 mm on the skin of the whole body. Further, the child had a height of 104.6 cm (upper/lower body =49.2 cm/55.3 cm =0.89), a weight of 15 kg, a body mass index of 13.71 kg/m2, a head circumference of 48.5 cm, a waist circumference of 48 cm, and a hip circumference of 53 cm. Both breasts were at the B1 stage, and the perineum was at the P1 stage. No obvious deformity was observed in the thorax, and no obvious pathological murmur was observed in cardiac auscultation. The liver and spleen were not significantly enlarged under the ribs (see Figure 1). An auxiliary examination of the child showed normal magnetic resonance imaging results. The peak value of GH in the provocation test of arginine combined with levodopa was 16.93 µg/L and insulin-like factor IGF-1 was 69.19 µg/L, which fell within the normal range. Chromosome was XX, with no abnormality. Trace element content, thyroxine function, liver, and kidney function were normal, and a utero-ovarian B ultrasound showed no abnormality. The child was initially diagnosed with short-stature syndrome, which may be accompanied by gene mutation.

Figure 1 Physical examination of the child. This image is published with the consent of the patient’s parents. 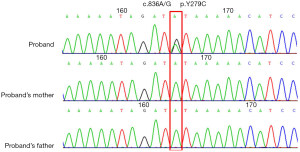 Figure 2 The results of the whole-exome sequencing for the patient and her parents.

After careful consideration, the parents of the child agreed to 2.6 units of rhGH (GenSci, Changchun, China) being subcutaneously injected into the child daily. The child’s immune cell level was monitored. Following the injections, no significant changes in lymphocytes and monocytes were observed, and hemoglobin and platelets were also normal in the patient during the application of rhGH for the treatment of C.836A/G. The level of white blood cells and neutrophils declined continuously, but the child did not appear to display clinical symptoms, such as fatigue, dizziness, fever, or bone pain.

Due to safety concerns, 11 months after the commencement of the treatment, rhGH was discontinued. After discontinuation, take orally Leucogen Tablets to increase leukocytes. After rhGH had been discontinued for 1 month, the level of white blood cells and neutrophils increased abruptly, and then decreased. With prolonged needle withdrawal, the white blood cells and neutrophils gradually returned to normal levels (see Figure 3A). Some 11 months after treatment with rhGH, the height of the patient increased from 106 to 115.6 cm, with a height standard deviation score (SDS) of −1.01. Further, 16 months after stopping treatment, the height SDS of the patient was −1.52, and the height growth rate had slowed down significantly (see Figure 3B). 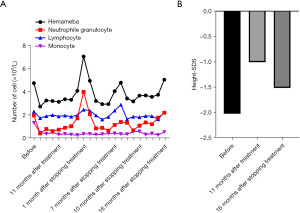 C.836A/G (PTyr279Cys) belongs to the PTPN11 mutation. The PTPN11 gene, located in chromosome 12q24, encodes a protein with the src homology-2 (SH2) domain and a tyrosine phosphatase domain containing the active site. PTPN11 is not only involved in many signal transduction pathways but is also important for normal hematopoietic processes, including proliferation, differentiation, and apoptosis (10). C.836A/G is situated in exon 7 of the PTPN11 gene, and causes amino acid 279 from tyrosine to cysteine (p.Y279C). The above mutation occurs in the SH2 domain of PTPN11. The main function of SH-2 is to mediate the interconnection of multiple signaling proteins in the cytosol to form heteromeric complexes of the proteins, and then to regulate signal transmission in signal transduction pathways. C.836A/G is very rare, and can result in a variety of diseases. C.836A/G-caused diseases, such as LEOPARD syndrome and Noonan syndrome, result in the occurrence of a series of clinical manifestations, including short stature, lentigines, hearing abnormalities, cardiac structural abnormalities, genital dysplasia, and facial anomalies.

A literature search of the PubMed database was conducted using the keywords of “C.836A/G”, “LEOPARD”, “PTPN11”, and “Noonan”, and a literature search of the China National Knowledge Infrastructure and Wanfang database was conducted using the keywords of “C.836A/G”, “LEOPARD syndrome”, “PTPN11”, and “Noonan syndrome”. A total of 17 articles on C.836A/G were retrieved, and 31 cases of C.836A/G were analyzed and collated, of which 26 of the cases were reported abroad (11-23) and 5 were reported in China (24-27). Among the cases, a case reported in Japan was combined with Marfan syndrome (19), a case in Britain (14) and a case in Germany (15) were combined with acute myeloid leukemia, and a case in Bosnia and Herzegovina was combined with growth hormone deficiency (GHD) (18). In all the above reports, the treatment was mainly aimed at the correction of abnormal cardiac structures and abnormal genitalia, the cosmetic treatment of lentigines, and chemotherapy for leukemia. The application of rhGH in the treatment of children with C.836A/G -caused short stature was not mentioned in any of the reports.

In this case, rhGH was chosen to improve the height of the child. Specifically, after 11 months of treatment, the height of the child increased by 9.6 cm, the growth rate reached 10.47 cm/year, and the height SDS increased from −2.03 before treatment to −1.01 after treatment. These findings show the significant benefits of rhGH in relation to height. Some 16 months after stopping treatment, the height of the child had increased by 4.7 cm, the growth rate was 3.5 cm/year, and the height SDS had decreased from –1.01 to –1.52. There were significant differences in the growth rate and height SDS between the injections of rhGH and needle withdrawal, which suggests the good efficacy of rhGH as a treatment. The routine blood results of the child were normal before treatment, but the white blood cells and granulocytes fell and became lower than the normal ranges during treatment. However, after the discontinuation of the medication, the granulocytes gradually returned to the normal range. Thus, the use rhGH in treatment of C.836A/G-caused short stature appears to cause some adverse responses. With the prolonged discontinuation of rhGH, the effect of rhGH on the hematologic system was alleviated, indicating that the discontinuation of rhGH could eliminate adverse responses.

There were 2 cases combined with leukemia among the previous reported articles on C.836A/G, which indicate the risk of hematologic malignancies in C.836A/G (14,15). It has also been reported that the application of rhGH has some common side effects (28), including scoliosis, idiopathic intracranial hypertension, and slipped capital femoral epiphysis. Thus, the occurrence of the adverse responses should be observed in the application of rhGH. It has been found that rhGH combined with other drugs in the treatment of children with short stature effectively promotes growth in height and reduces the occurrence of adverse responses (29). The therapeutic methods of short stature caused by genetic mutations should be further studied using different drug combinations in the future. Currently, foreign treatment data (30-33) have shown that there is no clear relationship between rhGH treatment and malignant tumors (new tumors, tumor recurrence, and secondary tumors). However, in this study, the risk of tumorigenesis needed to be evaluated in the treatment of the child with C.836A/G due to the existence of tumor risks in the genic mutation. During the treatment, routine blood tests should be taken as part of routine monitoring so that any abnormalities in the blood system can be found in a timely manner, and the therapeutic regimen adjusted accordingly.

In summary, rhGH was found to be efficacious in the treatment of C.836A/G-caused short stature. C.836A/G mutation carry intrinsic risk of leukemia, so routine blood test results should be closely monitored during treatment. In relation to the use of rhGH to improve short stature caused by gene mutation syndrome, further investigations need to be conducted to determine its safety, especially in the hematological system.

Reporting Checklist: The authors have completed the CARE reporting checklist. Available at https://tp.amegroups.com/article/view/10.21037/tp-22-174/rc

Conflicts of Interest: All authors have completed the ICMJE uniform disclosure form (available at https://tp.amegroups.com/article/view/10.21037/tp-22-174/coif). The authors have no conflicts of interest to declare.

Ethical Statement: The authors are accountable for all aspects of the work in ensuring that questions related to the accuracy or integrity of any part of the work are appropriately investigated and resolved. All procedures performed in this study were in accordance with the ethical standards of the institutional and/or national research committee(s) and with the Declaration of Helsinki (as revised in 2013). Written informed consent was obtained from the patient’s parents for publication of this case report and accompanying images. A copy of the written consent is available for review by the editorial office of this journal.