Risk factors of cerebral palsy in children: a systematic review and meta-analysis

The inclusion criteria were as follows: (I) case-control or cohort study; (II) the subjects of the study were children with cerebral palsy and healthy control children; (III) the subject of literature research is the risk factors of cerebral palsy in children; (IV) exposure factors include gestational hypertension, premature birth, premature rupture of membranes, or emergency cesarean section; (IV) there are risk ratio (RR) values or odds ratio (OR) values and corresponding 95% confidence intervals (CI) in the results of literature studies or can be calculated based on data..

The exclusion criteria were as follows: (I) studies with no control group; (II) literature studies other exposure factors; (III) the diagnostic criteria of the subjects were lacking or unclear; and (IV) case reports and replicate studies.

In this paper, three researchers used the Newcastle-Ottawa scale (NOS) of included studies to evaluate the quality of the included studies in terms of the selection of subjects (4 points), intergroup comparability (2 points), and exposure factor measurement (3 points), with a total of 9 points. Three researchers jointly completed the literature quality evaluation. Disagreements were resolved by discussion and consensus.

Analysis of sources of heterogeneity and testing for publication bias

The Cochrane RevMan5.3 software (The Nordic Cochrane, Copenhagen) was used to analyze the data. The observation factors were statistically described using the OR value and 95% CI. Two-sided P<0.05 was considered to indicate statistical significance.

In this study, 1,836 literatures related to the risk factors of cerebral palsy in children were retrieved from the databases. After screening according to the inclusion and exclusion criteria, 13 articles were included in the analysis, 3 cohort studies, 10 case control studies. There were a total of 2,489 children with cerebral palsy and 4,782 children without cerebral palsy. In terms of the NOS scores of the 13 included studies, none of the articles scored 9, four scored 8, eight scored 7, and one scored 6. The literature screening flow chart was shown in Figure 1 and basic information of the included studies was shown in Table 1. 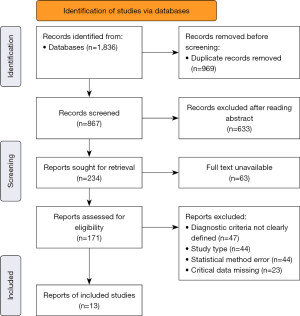 Six of the 12 included articles investigated the relationship between maternal pregnancy-induced hypertension and cerebral palsy. There was no heterogeneity among these six studies (χ2=7.69, P=0.17, I2=35%), and the fixed effects model was used. The combined OR value was 1.93, 95% CI was (1.48, 2.52), and the combined effect quantity was Z=4.80 (P<0.00001). Therefore, maternal gestational hypertension was identified as ana risk factor for cerebral palsy, as shown in Figure 2. Egger test showed no publication bias in the above six articles (P>0.05), as shown in Figure 3. 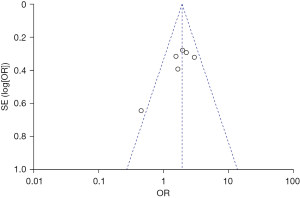 Seven of the 12 included articles studied the relationship between premature rupture of membranes and cerebral palsy. There was no heterogeneity among the 7 studies (χ2=6.80, P=0.34, I2=12%), and the fixed effects model was us ed. The combined OR value was 2.82, 95% CI was (2.14, 3.72), and the combined effect quantity was Z=7.36 (P<0.00001). Thus, premature rupture of membranes was identified as a risk factor for cerebral palsy in children, as shown in Figure 4. Egger test showed no publication bias in these seven articles (P>0.05), as shown in Figure 5. 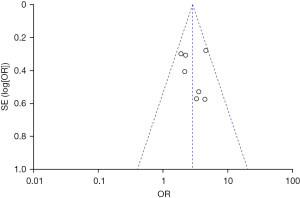 Figure 5 Funnel diagram of premature rupture of membranes and cerebral palsy in children. OR, odds ratio. 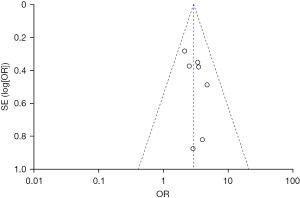 Six of the 12 included articles explored the relationship between emergency cesarean section and cerebral palsy. There was no heterogeneity among these six literatures (χ2=6.84, P=0.23, I2=27%), and the fixed effects model was used. The combined OR value was 1.99, 95% CI was (1.63, 2.43), and the combined effect amount was Z=6.75 (P<0.00001). Thus, emergency cesarean section was identified as a risk factor for cerebral palsy, as shown in Figure 8. Egger test showed no publication bias in these six articles (P>0.05), as shown in Figure 9. 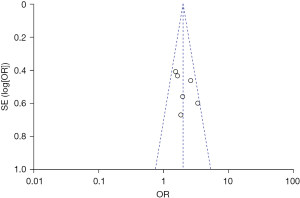 The pathogenic factors of cerebral palsy in children are complex. Comprehensive monitoring of various risk factors and timely intervention can significantly reduce the risk (17). Our study confirmed that maternal pregnancy-induced hypertension, premature rupture of membranes, premature delivery, and emergency cesarean section were risk factors for cerebral palsy in children.

Through meta-analysis, Himmelmann et al. (18) confirmed that maternal pregnancy-induced hypertension was a risk factor for cerebral palsy in children, which is consistent with our results. Research has pointed out that pregnancy-induced hypertension is primarily attributable a systemic arteriolar spasm, resulting in insufficient blood supply to the placenta and severe intrauterine hypoxia, fetal craniocerebral nerve injury, and even fetal neonatal death (19). In addition, a study has confirmed that the infants of pregnant mothers with pregnancy-induced hypertension have mental retardation, and the intelligence of these newborns is significantly lower than that of infants of normal pregnancy. In fact, there were still differences in intelligence between these two groups at adulthood (20). This study confirmed that gestational hypertension causes irreversible damage to the fetal nervous system. Timely symptomatic treatment and control of maternal blood pressure during pregnancy can effectively reduce the long-term disability risk of newborns (20).

In addition to the risk factors of cerebral palsy in children determined in our study, other studies have identified low body weight, neonatal respiratory distress, maternal infection during pregnancy, neonatal infection, persistent jaundice, multiple births, and amniotic fluid pollution a risk factors of cerebral palsy (12,30). It should be noted that these factors do not exist independently but are intertwined. The emergence of a risk factor may result from the joint action of several other risk factors. For example, pregnancy-induced hypertension and premature rupture of membranes may cause preterm birth. Preterm infants can easily experience symptoms such as neonatal low weight and infection (31). This interactive role network dramatically increases the difficulty of disease monitoring and prevention.

This study identified the risk factors of cerebral palsy in children through meta-analysis, which provides a reference basis for risk monitoring and clinical intervention.

Reporting Checklist: The authors have completed the MOOSE reporting checklist. Available at https://tp.amegroups.com/article/view/10.21037/tp-22-78/rc

Conflicts of Interest: All authors have completed the ICMJE uniform disclosure form (available at https://tp.amegroups.com/article/view/10.21037/tp-22-78/coif). The authors have no conflicts of interest to declare.