Here, we present the clinical and genetic features of a patient with compound heterozygous variants in NARS2. We used both in silico and in vitro experiments to investigate the functional impact of NARS2 variants on the NARS2 protein. We present the following article in accordance with the MDAR reporting checklist (available at https://tp.amegroups.com/article/view/10.21037/tp-21-570/rc).

The patient was a 6-month-old Chinese boy, the first child to a healthy, non-consanguineous couple. No relevant family history was present. The patient’s prenatal history was unremarkable. He was full-term at birth, with normal weight and length. At 3 months old, the patient developed generalized epilepsy and myoclonic seizures. He could not lift his head up stably, indicating early developmental delay. Muscle weakness and hypotonia were noted during the physical examination.

The study was conducted in accordance with the Declaration of Helsinki (as revised in 2013). The study was approved by the Ethics Committee of SCMC (No. SCMCIRB-K2020060-1) and informed consent was taken from the patient’s parents prior to the study.

Peripheral blood mononuclear cells (PBMCs) were isolated from the patient’s father and a healthy control using Ficoll-Paque Plus (GE Healthcare, USA). Total RNA was extracted from PBMCs using the RNeasy Mini Kit (Qiagen, Germany). First-strand cDNA was synthesized using a reverse transcription kit (TaKaRa, China). Synthesized products were amplified with the forward primer, 5'-GAGGCCTCAGAGAAGAACGA-3', located in exon 12 of NARS2 (NM_024678.6), and the reverse primer, 5'-TGGCAAGGGAGAAAAGATGC-3', located in the 3'-untranslated region (3'-UTR) of NARS2. Amplicons were directly sequenced, and those from the father’s cDNA were cloned into the pMD 18-T vector (TaKaRa, China). Eighty-seven clones were selected and sequenced.

GraphPad Prism 7.00 version was used for statistical analysis, and the data were expressed as mean ± standard deviation (SD). T-tests were used for comparisons. P<0.05 was considered statistically significant.

Bioinformatic analysis of the WES data showed that the coverage of target region reached 99.8%. The average sequencing depth was 204×, 98.8% of target region reached over 20×. Using WES, we identified two heterozygous variants in NARS2: NARS2 (NM_024678.6) c.1141A>G/p.Asn381Asp and NARS2 (NM_024678.6) c.1290G>C/p.Trp430Cys (Figure 1A).These variants were further confirmed by Sanger sequencing in the pedigree. NARS2 c.1141A>G was maternally inherited, whereas NARS2 c.1290G>C was paternally inherited. After searching through the Human Genome Mutation Database (http://www.hgmd.cf.ac.uk), Genome Aggregation Database (http://gnomad.broadinstitute.org/), and ClinVar (https://www.ncbi.nlm.nih.gov/clinvar/), we concluded that the variants were novel. Our local database (in individuals of the same ethnicity) also did not contain allelic frequencies of the two variants. All the reported pathogenic variants in NARS2 were summarized (Figure 1B). 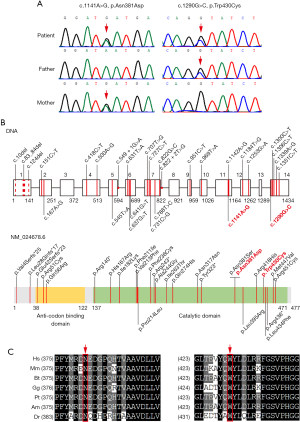 Figure 1 Novel variants of NARS2 and their distributions at the gene and protein level. (A) Results of variant site validation by Sanger sequencing. (B) Markers of reported variants on DNA and mRNA schematic diagrams. The variants identified in this study are indicated in red. (C) Sequence conservativeness of NARS2 in different species.

The NARS2 Asn381 and Trp430 amino acid residues are highly conserved across different species (Figure 1C). Multiple in silico predictive algorithms predicted that NARS2 c.1141A>G/p.Asn381Asp and c.1290G>C/p.Trp430Cys would have deleterious effects, including SIFT (damaging), PolyPhen-2 (probably damaging), MutationTaster (disease-causing), and PROVEAN (damaging). Because NARS2 c.1290G is the first nucleotide of exon 14, we used NetGene2 and Fsplice to assess its effect on NARS2 splicing. NetGene2 showed that the native and variant acceptor sites had a confidence of 0.41 and 0.25, respectively, while Fsplice indicated that their matrix weights were 7.2 and 5.2.

The 3D structure of the NARS2 protein was downloaded from SWISS-MODEL (Figure 2A). NARS2 p.Asn381Asp was located close to the active site, causing the replacement of a polar uncharged hydrophilic amino acid with an acidic amino acid; this change likely influenced protein structure and interactions with nearby areas (Figure 2B). The RaptorX prediction of protein secondary structure revealed significant differences between WT and p.Asn381Asp variants (Figure 2C). NARS2 p.Trp430Cys was also close to the active site, with the variant causing a substitution of the tryptophan indole ring. This change alters a nonpolar amino acid to a polar uncharged amino acid, potentially affecting how the active site binds with key molecules and its catalytic function (Figure 2B). RaptorX again revealed significant changes in the secondary structure (Figure 2C). 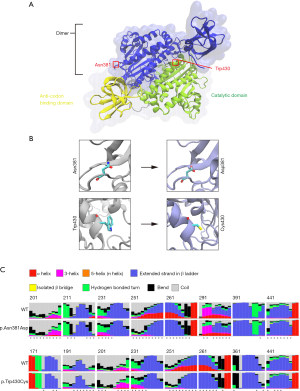 The mRNA analysis detected a band of 638 bp in samples from the patient’s father and the healthy control, but no other bands. Sanger sequencing of the amplicons revealed normal splicing of NARS2 in both the father and the control. After cloning and sequencing of amplicons from the father, we did not detect aberrant transcripts. However, the transcript ratio between NARS2 c.1290G>C and WT was abnormal. Most transcripts were from the NARS2 WT allele, while only 11.5% (10/87) of all sequencing clones were from the NARS2 c.1290G>C allele (Figure 3).

In vitro experiment on NARS2 variants 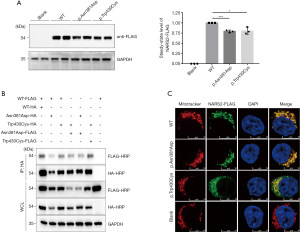 Here, we examined a patient with compound heterozygous variants of NARS2. The patient mainly presented early onset generalized epilepsy, myoclonic seizures, and severe bilateral hearing impairment, which was consistent with the characteristics of COXPD24. He could not lift his head up stably at 3 months old, indicating early developmental delay. Laboratory test suggested affected liver and cardiac function. However, we were not able to further assess his development and heart function, because the patient died of a seizure at 6 months and no cardiological imaging evaluation was performed before death. The patient’s brain MRI was normal at 3 months. No more brain MRI were performed before his death. Possibly more symptoms were masked by his early death.

Nearly 20 patients carrying NARS2 variants have been described since the first variant was reported in 2015 (5-8,13-17). The resultant deleterious phenotypes vary, with well-known examples being Alpers syndrome, Leigh syndrome, mitochondrial myopathy, hemiconvulsion-hemiplegia-epilepsy syndrome, COXPD24, and nonsyndromic deafness. Disease onset in most patients occurs during infancy and involves mitochondrial encephalopathy. However, some reports have also described late-onset patients in their 20s with mild spasticity and weakness or solo non-progressive manifestations, such as hearing loss (8,17). The most common clinical manifestations of NARS2 variants are refractory epilepsy, sensorineural hearing impairment, profound global developmental delay, and hypotonia. Consistent with previously reported cases, our patient exhibited early-onset generalized epilepsy, myoclonic seizures, and severe bilateral hearing impairment. We also noticed persistent elevation of serum hepatic and myocardial enzymes, indicating effects on the liver and heart. Although liver dysfunction has been observed in patients with NARS2 variants, cardiac dysfunction has not (15). Our work here suggests that further investigation is necessary to verify whether NARS2 variants lead to cardiomyopathy.

NARS2 contains an anti-codon binding domain at the N-terminus and a catalytic domain at the C-terminus (18). To date, over 30 NARS2 variants have been identified, including missense, nonsense, splicing variants, and gross deletions (Figure 1B), with missense being the most prevalent. Our study identified two novel NARS2 variants: NARS2 c.1141A>G and NARS2 c.1290G>C. Both were located in the catalytic domain and affected highly conserved amino acid residues. The location is typical of NARS2 variants, although variants can be found throughout the protein. Molecular modeling data suggested that both novel variants significantly changed the secondary structure. Additionally, separate pathogenicity-prediction programs all found them to be pathogenic.

NARS2 c.1141A>G leads to the substitution of asparagine with aspartic acid at position 381 (p.Asn381Asp). In a patient with Leigh syndrome and auditory neuropathy, a different missense change at the same amino acid residue (p.Asn381Ser) was previously in a compound heterozygous state with variant c.969T>A/p.Tyr323* (8). The p.Asn381Ser variant appears to exert a negative effect through disrupting NARS2 dimerization ability, although p.Asn381 is not directly involved in the dimer interphase (8). In addition, p.Asn381Ser decreased NARS2 protein levels in patient fibroblasts (8). We thus performed in vitro experiments to assess the impact of p.Asn381Asp on NARS2 expression and dimerization. Western blot analysis showed that the NARS2 protein with p.Asn381Asp had lower steady-state levels than WT. However, NARS2 dimerization and mitochondrial localization were unaffected.

Single-base substitutions at the first nucleotide position in an exon may affect splicing patterns (19). NARS2 c.1290G is the first nucleotide in the last exon of NARS2. Therefore, we used in silico and mRNA analyses to assess whether NARS2 c.1290G>C causes a splicing defect. Although the c.1290G>C variant acceptor site exhibited a lower splicing score, we did not identify any aberrant splicing in RNA extracted from the patient’s father, who carried the variant. However, we observed reduced transcription of the NARS2 c.1290G>C allele, suggesting that the transcript resulting from this variant was unstable. In vitro expression study also revealed decreased protein levels of NARS2 c.1290G>C/p.Trp430Cys. Similar to NARS2 c.1141A>G, the NARS2 c.1290G>C variant did not affect NARS2 mitochondrial localization and dimerization. The next step is to examine the functional impact of NARS2 variants on the mitochondrial respiratory chain using tissue samples from the patient, given that this link had been proposed in earlier research (6-8,13-15). However, we were unable to do so in this study because no patient tissue was available.

In conclusion, we successfully identified two novel NARS2 variants in a patient with COXPD24, characterized by early-onset generalized epilepsy, myoclonic seizures, and severe bilateral hearing impairment. Both variants impaired NARS2 expression, but did not affect the protein’s mitochondrial localization or dimerization. More experiments are needed to confirm the impact of NARS2 variants on aminoacylation activities and mitochondrial protein synthesis. Nevertheless, our study broadens the clinical and variation spectrum of NARS2-related disorders.

Reporting Checklist: The authors have completed the MDAR reporting checklist. Available at https://tp.amegroups.com/article/view/10.21037/tp-21-570/rc

Conflicts of Interest: All authors have completed the ICMJE uniform disclosure form (available at https://tp.amegroups.com/article/view/10.21037/tp-21-570/coif). The authors have no conflicts of interest to declare.

Ethical Statement: The authors are accountable for all aspects of the work in ensuring that questions related to the accuracy or integrity of any part of the work are appropriately investigated and resolved. The study was conducted in accordance with the Declaration of Helsinki (as revised in 2013) and approved by the Ethics Committee of SCMC (No. SCMCIRB-K2020060-1). Informed consent was obtained from the patient’s parents prior to the study.