Myeloid sarcoma (MS) is a rare soft tissue tumor composed of myeloid blasts in extramedullary sites and has a poor prognosis (1). MS may occur concurrently with myelodysplastic syndrome (MDS), myeloproliferative disorders (MPN), or acute myeloid leukemia (AML) (2). Isolated myeloid sarcoma (IMS) is one of the specific types of soft tissue tumors with the lowest incidence of MS, without evidence of MDS, MPN, or AML, and with a high risk of transformation AML within months or years (3).

MutS homolog 6 (MSH6) is a member of a group of mismatch repair (MMR) genes involved in the recognition and repair of mismatched nucleotides (4,5). Defects in MSH6 during embryonic development may affect the stability of the DNA genome, leading to the occurrence of somatic mutations, which can result in many types of malignancies, such as colorectal cancer, endometrial cancer, leukemia, or lymphoma (6-8).

The molecular factors that trigger the onset of MS have not been elucidated. Although some AML associated gene mutations have been identified in MS (9), the spectrum of gene mutations in MS is poorly understood. Therefore, more studies are needed to explore the mutational landscape in-depth to understand the onset and progression of MS and potentially broaden risk-adapted treatment options for MS patients. We present the following case in accordance with the CARE reporting checklist (available at https://dx.doi.org/10.21037/tp-21-326).

An 11-year-old Uyghur girl with a 15-day history of fever and paroxysmal cough without obvious triggers was examined and treated. Due to suspected pneumonia, the patient received symptomatic treatment with oral spectinomycin at the local hospital for 3 days and intravenous cefuroxime sodium anti-infective treatment for 2 days. The cough slightly improved, but the body temperature did not return to normal. She then developed right hip pain, which was evident during post-treatment activity. The patient attended our hospital for treatment on 15-Nov-2018. During the illness, the patient’s main symptoms were fatigue and facial pallor, no significant change in weight but decreased physical strength, the appearance of pale oral mucocutaneous lesions, and petechiae visible in the lower limbs. Swelling of cervical lymph nodes at multiple sites, mild congestion in the pharynx, and no swelling of tonsils can be touched.

Routine blood screening showed three major myeloid lineage abnormalities, with a white blood cell count of 1.20×109/L, neutrophil count of 0.11×109/L, lymphocyte count of 1.05×109/L, red blood cell count of 2.02×1012/L, hemoglobin of 66 g/L, and platelet count of 19×109/L. Immunophenotypic testing showed AML subtype AML-M2 (predominantly expressing HLA-DR, CD7, CD13, CD33, CD3, CD3CD38, CD117, and CD123). Lymphocytes comprised approximately 38% of the nuclear cells, with an elevated CD3+ CD8+ T lymphocytes proportion. Bone marrow biopsy showed numerous immature cells, and morphological features supported the diagnosis of acute leukemia. However, bone marrow morphology revealed that nuclear cell count was 0.06. Taken together, these results show that the patient did not meet the diagnostic criteria for AML-M2. The patient chose to be discharged from the hospital due to financial reasons, and no further diagnosis could be made.

On 27-Dec-2018, the patient review showed no abnormalities. Bone marrow biopsy showed normal bone tissue proliferation with trilineage cells evident and a generally normal granulocyte/erythrocyte ratio. Granulocytes were observed to be mainly in the maturation stage. Megakaryocytes were scattered, and macrophages and megakaryocytes were seen. The mesenchymal reticular fibers showed mild hyperplasia. Following immunohistochemistry, no obvious neoplastic lesion was found in this tissue biopsy. Bone marrow morphology was suggestive of active bone proliferation with 23% granulocytes and readily observable megakaryocytes. No obvious developmental abnormalities were found by immunophenotypic testing.

The patient attended our hospital again starting 03-Mar-2019 for 20 days after finding a head mass. Immunohistochemical staining of the mass found CD10 (−), CD99 (+), CD20 (+), CD3 (−), CD117 (weak +), CD34 (unclear location), TdT (−), Pax5 (−), Ki-67 (50% +), MPO (−), and CD43 (+) (Figure 1). Hematoxylin and eosin staining of the mass revealed intermediate-sized cells with abundant cytoplasm, slightly irregular karyotype, diffusely organized in sheets, and an infiltrative growth pattern. On review of the immunohistochemical and histochemical staining results combined, the patient was ultimately diagnosed as having an isolated myelosarcoma (Figure 2A). Acute leukemia was excluded due to a blast count of 4%. The patient received chemotherapy according to the CCLG-2015 protocol on 28-Mar-2019. DAH regimen chemotherapy was performed from 28-Mar-2019 to 03-Apr-2019. Bone marrow morphology showed no small particles. Detection of minimal residual disease (MRD) by flow cytometry indicated complete remission (Figure 2B). The patient then received IAE regimen chemotherapy from 27-May-2019 to 02-June-2019. Unfortunately, due to economic reasons, the patient chose to be discharged after treatment and was then lost to follow-up. 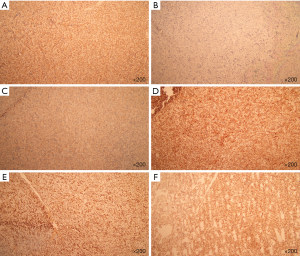 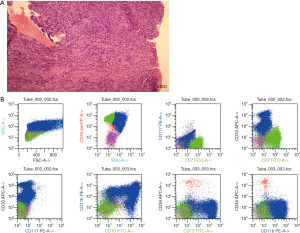 Figure 2 Myeloid sarcoma involving the head mass of an 11-year-old girl. (A) Low-power view showing the infiltrative and destructive pattern of growth of malignant cells (hematoxylin and eosin, original magnification ×200); (B) detection of measurable residual disease by multicolor flow cytometry of bone marrow.

Targeted sequencing of 236 genes was performed on patient saliva and bone marrow samples to detect gene mutations in genomic DNA. This revealed that the patient carried the germline MSH6 c.3953_3954insAA p.R1318fs mutation and low frequency of other genes such as SH2B3, USH2A, and SF1 (Table 1). We predicted that the MSH6-p.R1318fs mutation caused a conformational change of the protein by using the SWISS-MODEL Interactive Workspace (Figure 3A,3B). 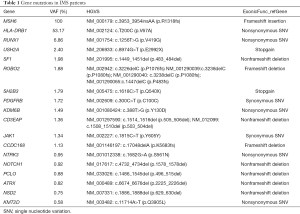 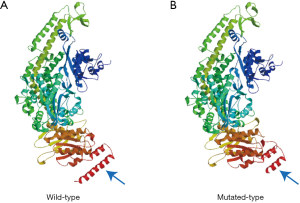 All procedures performed in studies involving human participants were in accordance with the ethical standards of the institutional and/or national research committee(s) and with the Helsinki Declaration (as revised in 2013). Written informed consent was obtained from the patient for publication of this case report and accompanying images. A copy of the written consent is available for review by the editorial office of this journal.

We described a rare, IMS in a child patient, in which the germline MSH6 c.3953_3954insAA p.R1318fs mutation was detected. We speculated that the germline MSH6 mutation caused genomic instability, triggering multiple somatic mutations and finally leading to the onset of MS in this patient. In addition, the myeloperoxidase (MPO)-negative result in this patient after our analysis may be due to two reasons. Firstly, this specimen was derived from the head mass and might be affected by the specimen extrusion process, resulting in the immunohistochemical results. Secondly, tumor cells of this patient’s myeloid sarcoma might be derived from progenitor cells given the small number of poorly differentiated myeloid primitive cells, which might be negative for MPO.

Many literature reports have detected MSH6 mutations in MSH6-related diseases, and multiple mutation sites have been found in various diseases (9-12). Biallelic pathogenic mutations in MSH6 have also been identified in patients with various hematologic malignancies, such as MDS or AML, but have not been reported in patients with MS (8,13-20). To our knowledge, the present study is the first to identify germline MSH6 mutations in MS patients. According to the dbSNP database, the population mutation frequency of the MSH6-p.R1318fs mutation site in the healthy population is very low, and currently, the MSH6-p.R1318fs mutation site has only been reported in Hereditary nonpolyposis colorectal cancer (HNPCC) (21,22). Our study found that MSH6-p.R1318fs mutation may cause a conformational change of the protein. We can infer that this region is highly conserved and that the mutation may result in a functional alteration of the MSH6 protein.

In addition, in our case, we report for the first time that SH2B3 somatic mutations were found in IMS patients. Sh2b adaptor protein 3 (SH2B3), a negative regulator of multiple tyrosine kinase signaling pathways and cytokine signaling pathways, plays a key role in hematopoiesis by inhibiting the activation of STAT3 phosphorylation through binding to JAK2 (23-25). Researchers have confirmed that SH2B3 mutations are associated with the occurrence and development of myeloproliferative neoplasms (MPN) or B-cell acute lymphoblastic leukemia (ALL) (26,27). Therefore, SH2B3 may have an impact on the pathogenesis of MS. Meanwhile, a USH2A mutation was also detected in this MS patient. Mutations in the USH2A gene are associated with Usher syndrome type II, which is characterized by hearing loss and vision loss (28-30). In some IMS patients, Eyelid tumors or patients with acute leukemia have been reported to develop eyelid myeloid sarcomas during chemotherapy (3,31,32). We speculate that USH2A mutations may be the cause of MS occurring on the eyelids. While no clinical signs of USH2A related symptoms were found in the patient we reported on; low frequency mutations occurred in both SH2B3 and USH2A genes in this case, so whether they are involved in the molecular mechanism of disease occurrence needs further exploration.

Isolated MS carries a high risk of progression to AML (3). Currently, different genetic variations in AML-related genes such as nucleophosmin (NPM1), FMS-like tyrosine kinase 3 (FLT3), KIT, KRAS, WT1, TP53, RUNX1, and others, have been identified in MS patients (33-35). However, in our study, only RUNX1 mutations were detected in MS patients. This may be mainly due to the occurrence of somatic mutations as a cumulative process involved with germline MSH6 mutations, a single mutation often being insufficient to cause malignant transformation.

Taken together, we speculate that germline MMR mutations may contribute to the pathogenesis of MS. Germline MMR mutations promote DNA instability, leading to progressive accumulation of somatic mutations that may confer some clinical specificity. We recommend that patients with MS, and their relatives, be considered for MMR-related gene mutation testing. The identification of germline MMR mutations will facilitate the implementation of effective surveillance programs for mutation carriers.

Reporting Checklist: The authors have completed the CARE reporting checklist. Available at https://dx.doi.org/10.21037/tp-21-326

Conflicts of Interest: All authors have completed the ICMJE uniform disclosure form (available at https://dx.doi.org/10.21037/tp-21-326). Dr. Shanbo Cao reported that he is an employee of Acornmed Biotechnology Co., Ltd. Beijing Economic and Technological Development Zone. The authors have no other conflicts of interest to declare.

Ethical Statement: The authors are accountable for all aspects of the work in ensuring that questions related to the accuracy or integrity of any part of the work are appropriately investigated and resolved. All procedures performed in studies involving human participants were in accordance with the ethical standards of the institutional and/or national research committee(s) and with the Helsinki Declaration (as revised in 2013). Written informed consent was obtained from the patient for publication of this case report and accompanying images. A copy of the written consent is available for review by the editorial office of this journal.