Bronchial asthma is a common chronic respiratory disease in children, characterized by chronic airway inflammation, airway hyperresponsiveness, and reversible airflow obstruction. Studies have shown that effector cells secrete various cytokines that mediate and maintain tissue inflammation and injury, thus promoting the proliferation of goblet cells, smooth muscle cells, and the extracellular matrix (1). Animal and clinical studies have shown significant differences in cytokine abundance in serum and bronchoalveolar lavage fluid (BALF) between bronchial asthma patients and healthy control patients. Significant differences have also been found in the cytokine expression of patients with different severities of bronchial asthma, and those in the remission stage or acute exacerbation stage (2,3). At present, pulmonary function examination is widely carried out in clinical settings. Studies have shown that the level of fractional exhaled nitric oxide (FeNO) better reflects the degree of airway inflammation than cytokine expression (4). This study sought to evaluate correlations between the levels of cytokines in BALF, lung function indexes, and FeNO in children with bronchial asthma, and explore the relationship between the degree of the local inflammatory response and lung function in bronchial asthma to provide novel insights into the pathogenesis of bronchial asthma. We present the following article in accordance with the STARD reporting checklist (available at https://dx.doi.org/10.21037/tp-21-322).

From October 2018 to October 2020, 42 children with bronchial asthma who underwent bronchoscopy at our department were selected as the research subjects of this study. To be eligible to participate in this study, patients had to meet the following inclusion criteria: (I) have been diagnosed with bronchial asthma according to the diagnostic criteria in the Guidelines for the Diagnosis and Prevention of Bronchial Asthma in Children (2016); (II) be aged 6–12 years and able to cooperate with the bronchoscopy, pulmonary function, and FeNO examinations; (III) have no history of infection and antibiotics or glucocorticoid use in the past month; (IV) have no other serious complications, such as severe hepatic and renal insufficiency; and (V) have a guardian who was willing to provide informed consent. Patients were excluded from the study if they were suffering from wheezing due to common causes, such as tracheal stenosis or softening. For the control group, 17 children were selected who attended the hospital for the treatment of a bronchial foreign body and underwent a bronchoscopy at our department during the same period. All the procedures in this study involving human participants were performed in accordance with the Declaration of Helsinki (as revised in 2013). The study was approved by the Ethics Committee of Xinxiang Central Hospital, The Fourth Clinical College of Xinxiang Medical University (No.:2017-006), and informed consent was obtained from all the patients’ guardians.

Determination of cytokines in BALF

Bronchoalveolar lavage was performed according to the guidelines for pediatric bronchoscopy. During the operation, the bronchoscope was placed at the opening of the right middle bronchus, 0.5 mL/kg of normal saline was injected, and negative pressure suction was then used to collect the lavage fluid. The lavage solution was centrifuged at 1,000 rpm for 20 minutes, and the supernatant was collected in a test tube. The specimens were stored in a –20 °C refrigerator to avoid repeated freezing and thawing.

The supernatant samples were dissolved at room temperature, and interleukin (IL)-4, IL-5, IL-6, IL-7, IL-9, IL-13, and IL-17 were detected using an enzyme-linked immunosorbent assay kit produced by Jiangsu Biyuntian Company. Each specific step was executed in accordance with the manual.

FeNO was determined by a Niox Mino eNO analyzer produced by Aerocrine, Sweden. Before examination, the patients were instructed to avoid strenuous exercise, cold water, superheated water, carbonated drinks, and nitrogenous food (such as soybean milk and coffee) and were forbidden to eat and drink 1 hour before the examination. During the test, the expiratory flow rate was set to about 50 mL/s, and the expiratory time was set to 10 s. The test was repeated 3 times to ensure that the deviation of the 3 results was not more than 10%; the average of the 3 results was taken as the final result. Children with bronchial asthma were divided into a high FeNO group [FeNO ≥25 ppb (parts per billion)] or low FeNO group (FeNO <25 ppb) according to their FeNO value.

Pulmonary function was measured by a pulmonary function instrument produced by Kanger Fusheng Co. Ltd, United States. 1 hour after FeNO determination, lung function was detected. Before the measurement, the environmental factors and flow rate were calibrated. Children were asked to follow the technician’s directions to first breathe calmly, to try to inhale fully, and to then exhale the gas faster, being careful to avoid mouth leakage. We selected forced expiratory volume in 1 second/forced vital capacity (FEV1/FVC%), and maximal expiratory flow at (MEF)25, MEF50, and MEF75 to analyze.

Measurement data with normal distributions are expressed as means ± standard deviations. Count data are expressed as percentages. A univariate analysis of variance or chi-square test was used to compare differences between the general data, lung function indexes, and cytokine levels in BALF among the low FeNO, high FeNO, and control groups. Pearson correlation was used to calculate the correlation coefficient “r” between FeNO and cytokines in BALF and lung function in children with bronchial asthma. The receiver operating characteristic (ROC) curve was used to determine the cutoff, area under the curve (AUC), sensitivity, and specificity of low FeNO and high FeNO. A P<0.05 was considered statistically significant.

Comparison of cytokines in BALF

The correlation between BALF, FeNO, and lung function in children with bronchial asthma

Table 3 Correlation among cytokines, FeNO, and lung function in the BALF of children with bronchial asthma (n=42)
Full table

ROC curves of low FeNO and high FeNO in BALF 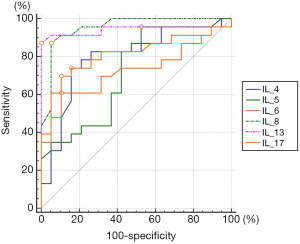 This study showed that FEV1/FVC, MEF25, MEF50, and MEF75 in children with bronchial asthma were significantly lower than those in the control group, indicating that bronchial asthma can seriously harm the lung function and reduce the quality of life of patients. Our results are consistent with those of previous research (5). Studies have shown that in the inflammatory reaction, various lung tissue cells, such as inflammatory cells, alveolar epithelial cells, and vascular endothelial cells, convert L-arginine to L-citrulline and produce nitric oxide under the action of nitric oxide synthase (6). FeNO is closely related to the endogenous inflammatory response in lung tissue (especially eosinophilic inflammation) (7). Exhaled FeNO is moderately strongly correlated with the number of eosinophils in BALF, sputum, and blood (8). Thus, FeNO is often used as a non-invasive alternative indicator of lung inflammation in patients with bronchial asthma. In addition, there was no significant difference in lung function between the low FeNO and high FeNO groups, which suggested that lung function indexes do not reflect the level of pulmonary inflammation in children with bronchial asthma accurately and early.

There was no significant correlation between pulmonary function indexes and cytokines in the BALF of children with bronchial asthma, which suggested that pulmonary function indexes could not determine the degree of local inflammatory reaction in lung tissue. Huang et al. found that serum IL-4 and IL-13 were significantly negatively correlated with FEV1/FVC in 96 adult patients with bronchial asthma (18). Conversely, Grubek-Jaworska et al. found that sputum IL-13 was not associated with FEV1/FVC (19). The differences in these results may be due to the different characteristics of the patients, the different samples, and other factors that may affect the expression of cytokines.

The ROC curves showed that cytokines in the alveoli lavage fluid of asthmatic children had a certain value in the auxiliary identification of FeNO. For example, the AUC of IL-13 in identifying low FeNO and high FeNO was 0.94, with a specificity of up to 100%. Further research should be conducted to determine whether FeNO reflects the local inflammatory activity of lung tissue. In previous studies, the relationship between sputum or serum cytokine levels and FeNo has been detected (20). However, the cytokines in the alveolar lavage fluid can more directly reflect the local inflammation level of the lung tissue, so the results obtained are more reliable.

In conclusion, the cytokines IL-4, IL-5, IL-6, IL-8, IL-13, and IL-17 in the alveoli lavage fluid of asthmatic children were significantly correlated with the nitric oxide in the exhaled air, which can be used to evaluate airway inflammation levels of children with asthma.

Reporting Checklist: The authors have completed the STARD reporting checklist. Available at https://dx.doi.org/10.21037/tp-21-322

Conflicts of Interest: All authors have completed the ICMJE uniform disclosure form (available at https://dx.doi.org/10.21037/tp-21-322). The authors have no conflicts of interest to declare.

Ethical Statement: The authors are accountable for all aspects of the work, including ensuring that any questions related to the accuracy or integrity of any part of the work have been appropriately investigated and resolved. All the procedures in this study involving human participants were performed in accordance with the Declaration of Helsinki (as revised in 2013). The study was approved by the Ethics Committee of Xinxiang Central Hospital, The Fourth Clinical College of Xinxiang Medical University (No.:2017-006), and informed consent was obtained from all the patients’ guardians.