RRTI can be classified as “body deficiency cold”, “cough and asthma”, “long cough”, “deficiency syndrome” and “spontaneous sweating” in the discourse of traditional Chinese medicine (9). The key pathogenesis lies in “deficiency” (10), and clinical treatment is based on stage treatment and syndrome differentiation.

TCM prescriptions typically have multiple components, multiple targets, and multiple pathways. This study used network pharmacology to examine the potential pharmacological effects and molecular mechanisms of Modified Ginseng-Schisandra Decoction on the treatment of RRI, so as to lay a theoretical foundation for its treatment of RRTI. We present the following article in accordance with the MDAR reporting checklist (available at https://dx.doi.org/10.21037/tp-21-240).

Screening the main active ingredients of the Modified Ginseng-Schisandra Decoction

Prediction of targets of active ingredients in Modified Ginseng-Schisandra Decoction

The TCMSP database revealed the targets corresponding to the active ingredients of the Modified Ginseng-Schisandra Decoction. The targets from different sources were entered into UniProt (http://www.uniprot.org), PubMed, and other databases with the search limited to the human species. In this way, the gene symbols corresponding to the targets were acquired for subsequent network pharmacological analysis.

Drug-disease targets (DDTs) were obtained from identifying the intersection of Modified Ginseng-Schisandra Decoction target and the RRTI target with Venn (http://bioinformatics.psb.ugent.be/webtools/Venn/. The Modified Ginseng-Schisandra Decoction-Active compounds-therapeutic target network was constructed with Cytoscape 3.7.2 software, and topology analysis and visualization were performed. The Network Analyzer tool in the software was used to calculate the degree value to evaluate the importance of the components and targets in the network.

The Modified Ginseng-Schisandra decoction PPI network was constructed using the Search Tool for the Retrieval of Interacting Genes/Proteins (STRING) database (https://string-db.org/). The conditions were set to “minimum required interaction score =0.9” and “hide disconnected nodes in the network”.

To further elucidate the different scientific connotations of Modified Ginseng-Schisandra decoction from a biological perspective, we used the KOBAS online server (http://kobas.cbi.pku.edu.cn/kobas3/?T=1) with the species set to human to conduct Kyoto Encyclopedia of Genes and Genomes (KEGG) enrichment analysis and Gene Ontology (GO) function enrichment analysis for the DDTs of the Modified Ginseng-Schisandra Decoction. This was followed by visualization using the KEGG Mapper tool (https://www.genome.jp/kegg/mapper.html) to analyze the specific role of related targets in important signaling pathways and to obtain a schematic diagram of Modified Ginseng-Schisandra Decoction regulatory signaling pathways (13).

The relative data were recorded with EXCEL. In KEGG pathway enrichment analysis, the pathways with P<0.05 were considered statistical different and selected. 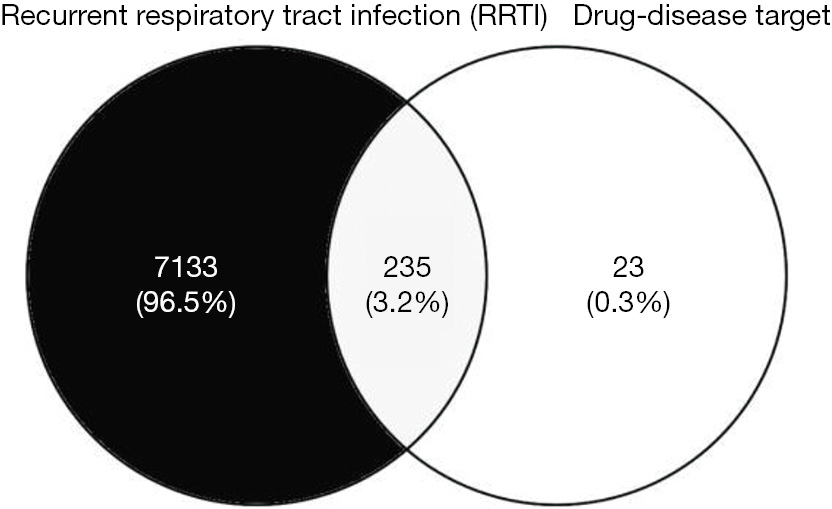 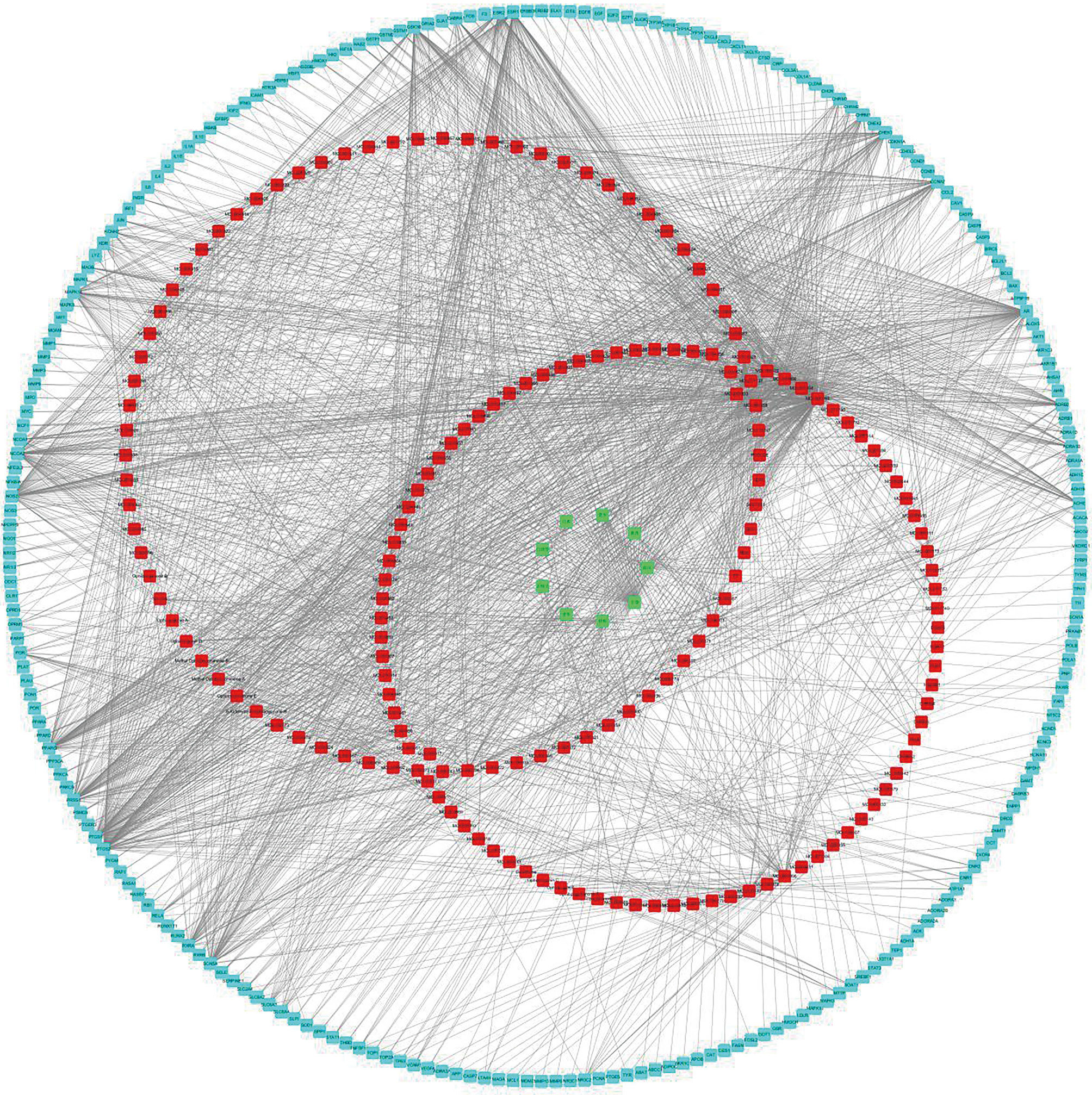 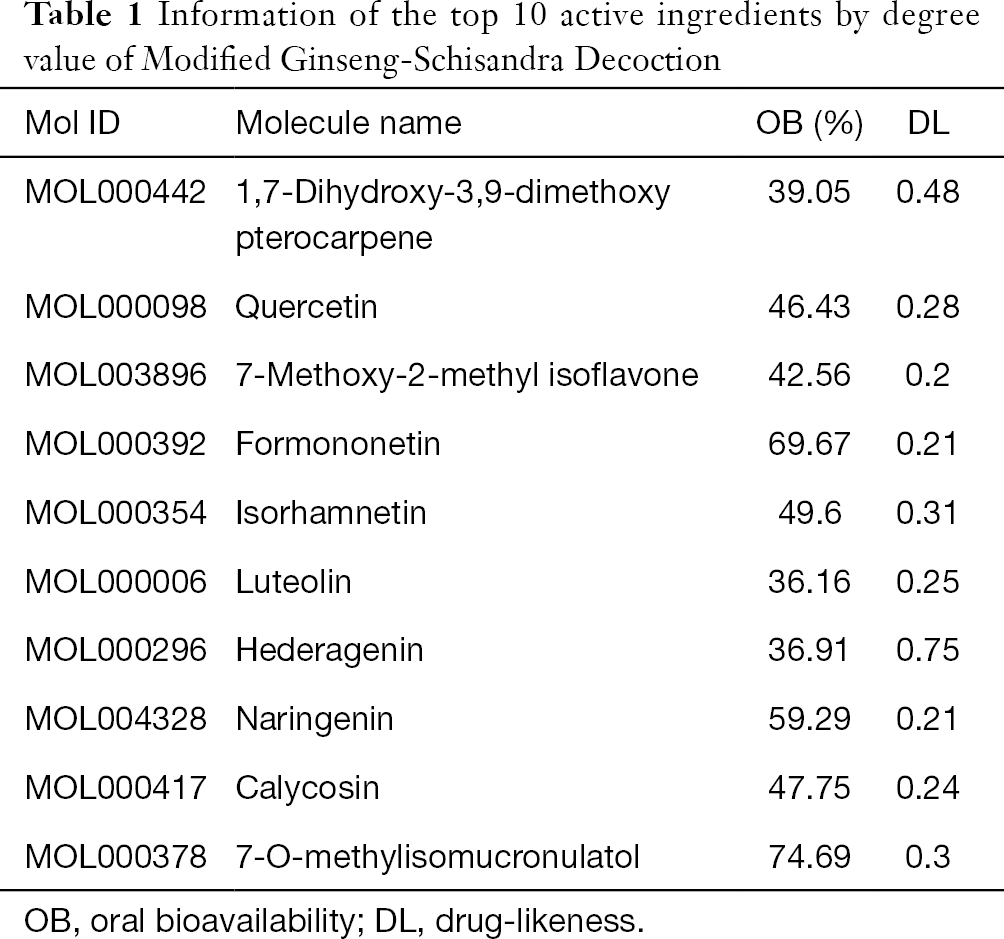 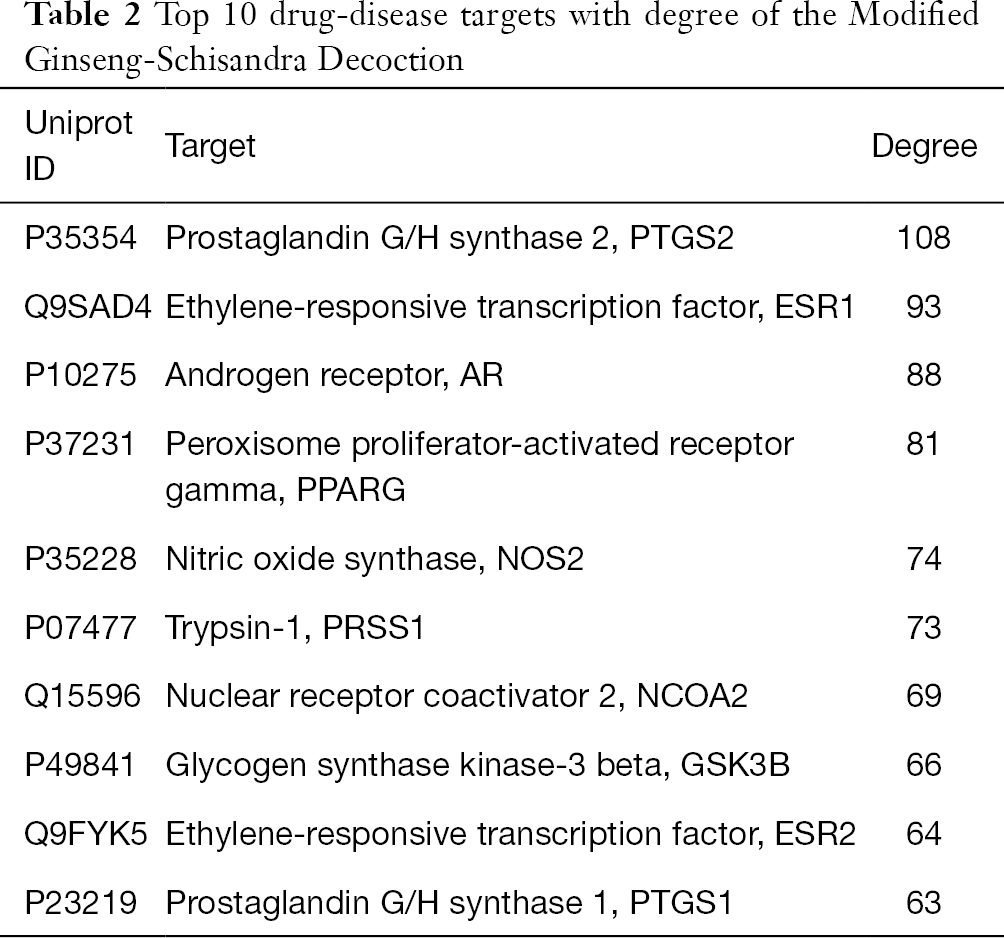 A total of 235 DDTs of the Modified Ginseng-Schisandra Decoction were imported into the STRING database (https://string-db.org/). With the filter condition set to “Homo sapiens” and the conditions set to “minimum required interaction score =0.9” and “hide disconnected nodes” in the network”, 216 target proteins were obtained. According to the degree value of the network topology index, a bar graph of the top 30 related protein nodes was drawn (Figure 3). 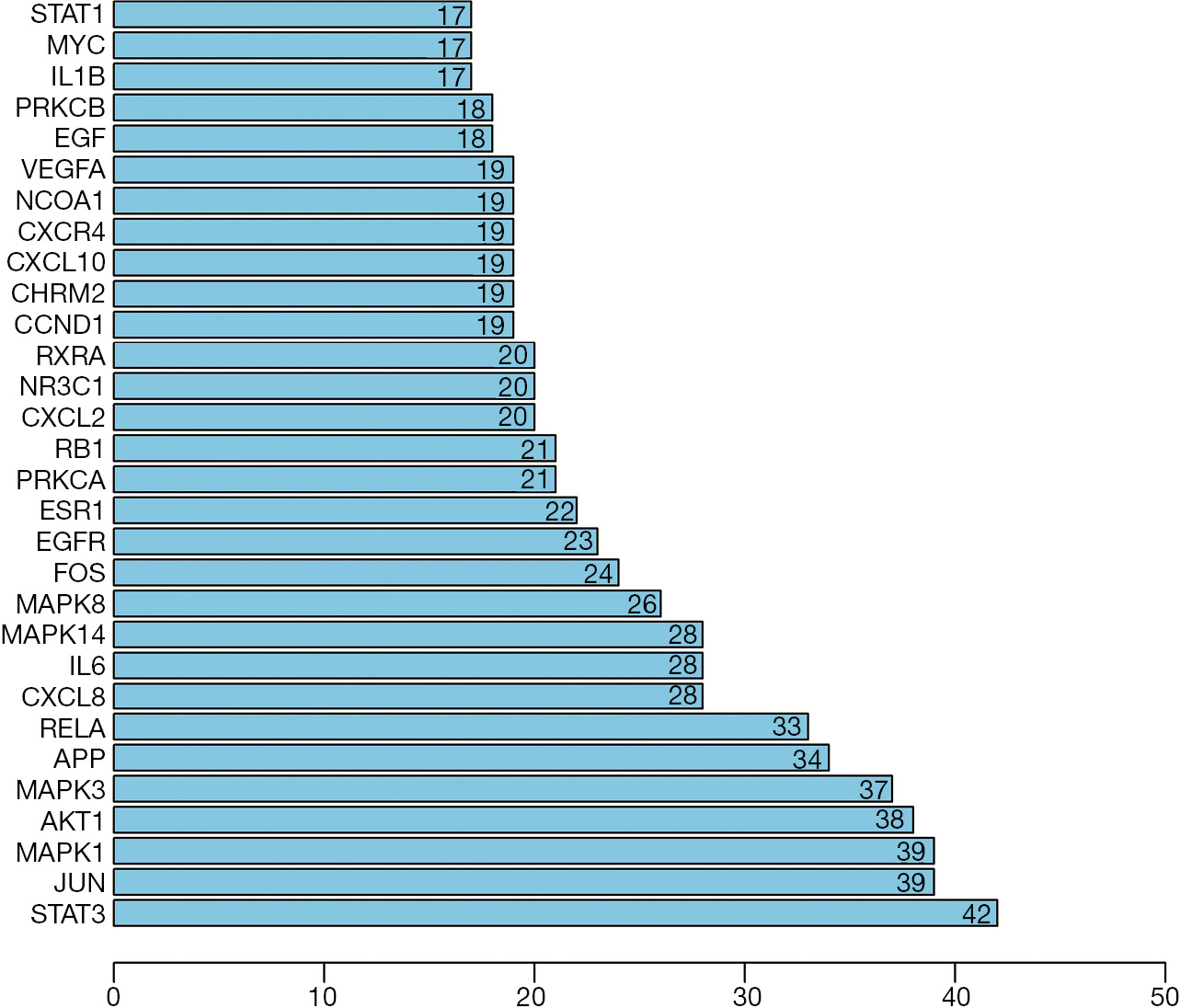 Enrichment analysis of the KEGG signal pathway of the core PPI 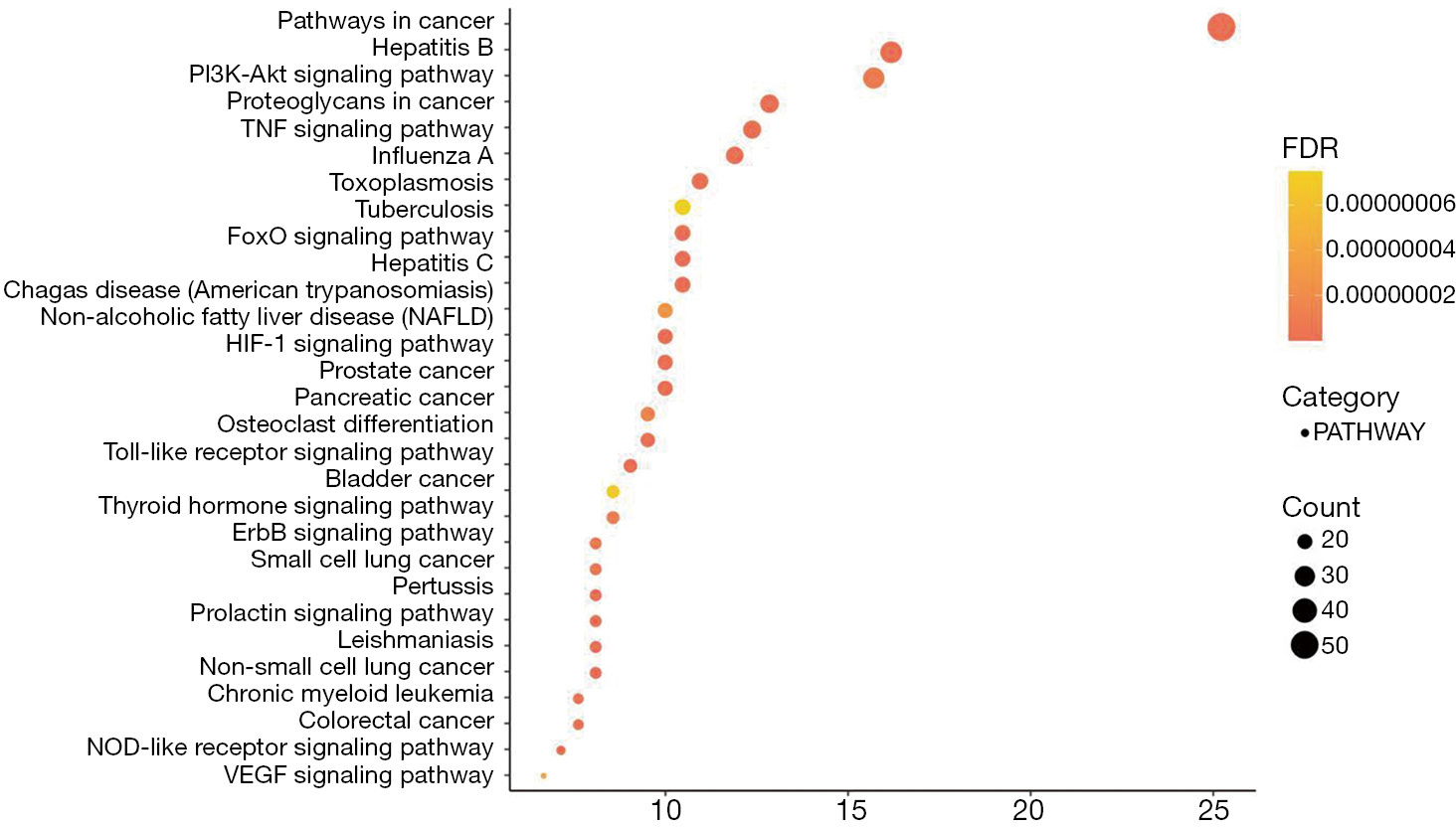 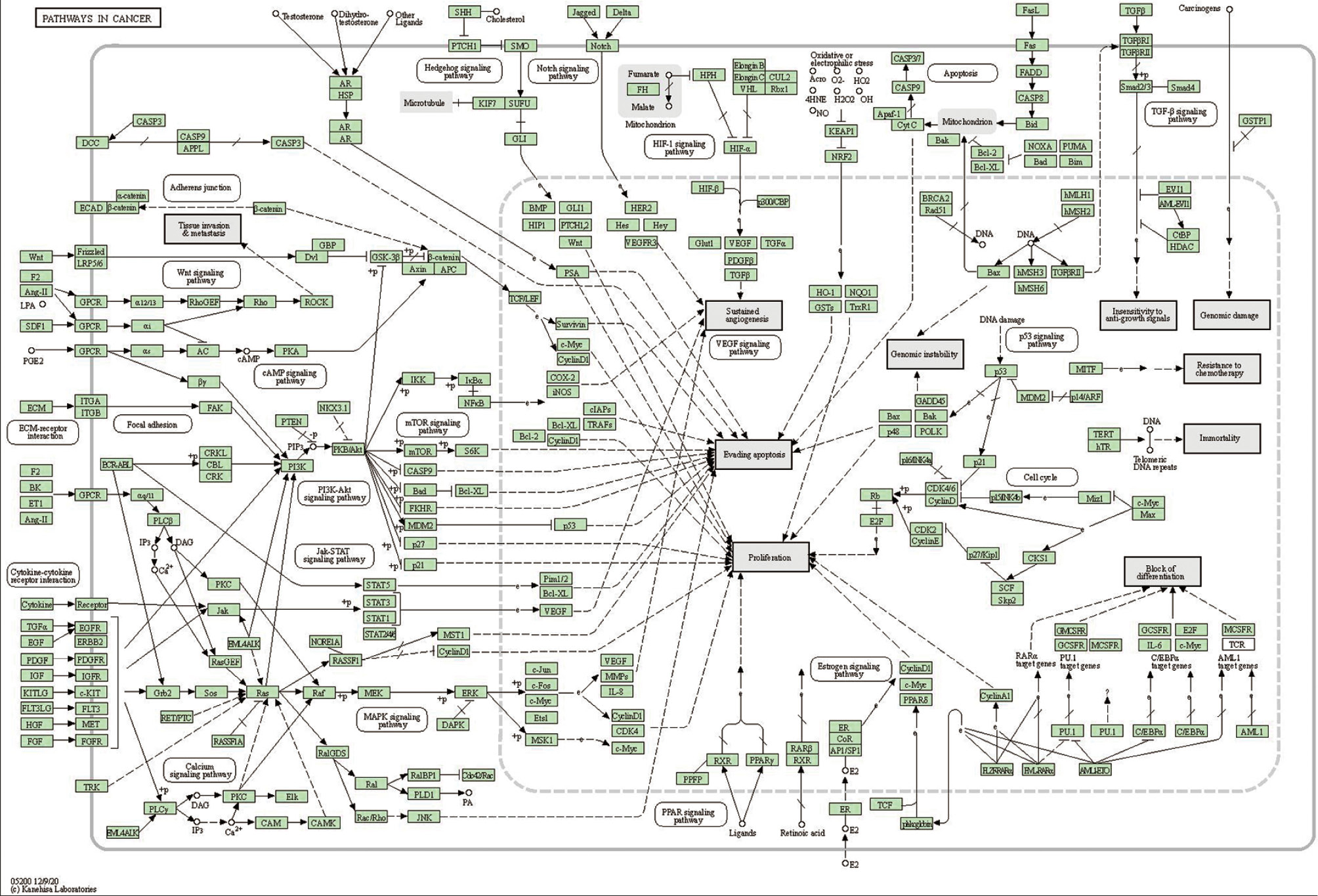 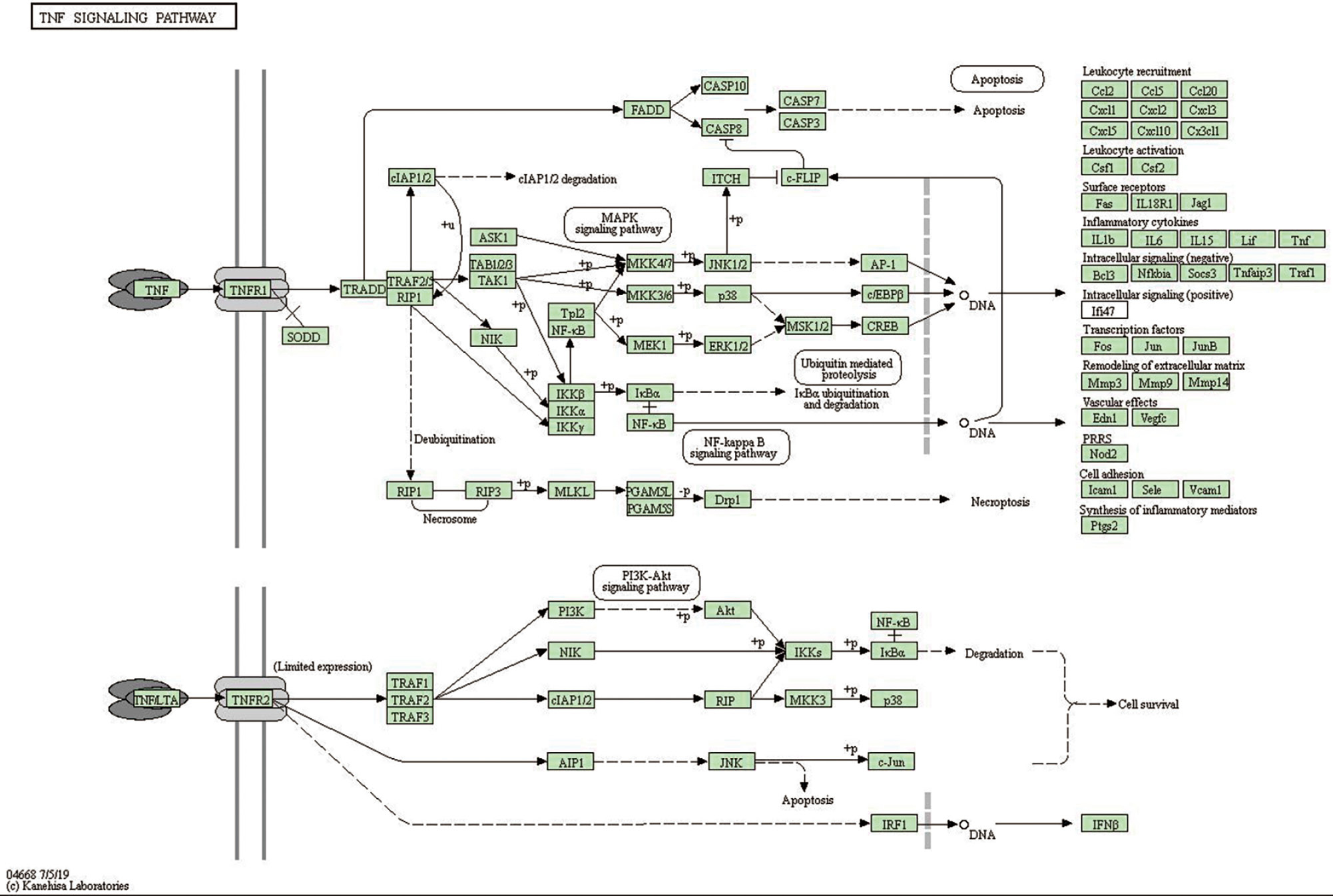 The Modified Ginseng-Schisandra Decoction is composed of Radix astragali, Codonopsis pilosula, Atractylodes macrocephala Koidz., Poria cocos, Schisandra, Ophiopogon japonicus, oyster, Radix glycyrrhizae Preparate, Saposhnikovia divaricata, and is derived from the combination of Chinese classical prescriptions including the Ginseng-Schisandra Decoction, Yupingfeng Powder, Sijunzi Decoction, and Shengmaiyin. Chinese medicine believes that children are pure Yang bodies, and if ginseng is not used properly, it is easy to develop Yang heat and “excessive internal heat” (14). Codonopsis pilosula is sweet and flat, and is more suitable for children. Therefore, the original ginseng is exchanged for Codonopsis. Codonopsis pilosula and Radix astragali are principal drugs, which correspond to the spleen and lung meridian. Codonopsis pilosula has the effects of tonifying the middle-Jiao and Qi, invigorating the spleen and lungs, invigorating the blood and activating fluid, and eliminating dysphoria. It can enhance immune function, regulate the intestinal tract, reduce the absorption of inflammatory mediators and toxins, and has a good blood-replenishing effect (15). Radix astragali is good at entering the spleen and stomach. It is an important medicine for tonifying the middle-Jiao and Qi. It can tonify the lung and spleen, replenish qi for strengthening superficies. Atractylodes macrocephala Koidz combined with Poria cocos can strengthen the spleen, dry dampness, and replenish qi; Schisandra with Ophiopogon japonicus has the functions of nourishing Yin and moistening lung, benefiting stomach and promoting body fluid, clearing away the heart fire and eliminating irritability; Saposhnikovia divaricata has the functions of dispelling wind, relieving the superficies, and eliminating dampness. According to modern pharmacological research, Saposhnikovia divaricata has antipyretic, analgesic, anti-inflammatory, antibacterial, antiallergic, and regulating immune function effects (16). Traditional Chinese medicine believes that oysters have the functions of submerging Yang and replenishing Yin, reconciling Yin and Yang, and the combination of Yin and Yang means that “Righteousness is stored in the body, and evil cannot be dried.” Modern research has found that oysters’ chemical composition has calcium carbonate, iron, zinc, and other trace elements, and is rich in protein zinc and has a wide range of pharmacological activities (17), which can enhance the body’s defense against nonspecific stimuli. Radix glycyrrhizae Preparate can tonify the spleen, replenish qi and harmonize various medicines. The Modified Ginseng-Schisandra Decoction has the effects of nourishing the spleen and qi, nourishing Yin, and moisturizing the lungs.

The DDT network diagram of the Modified Ginseng Decoction in this study shows that, from the point of view of a single medicine, Radix glycyrrhizae Preparate can have up to 88 compounds, Codonopsis pilosula and Saposhnikovia divaricata have 16, and Radix astragali has 15. This suggests that Radix glycyrrhizae Preparate, Codonopsis pilosula, Radix astragali, and Saposhnikovia divaricata may play a more important role in the Modified Ginseng-Schisandra Decoction treatment of RRTI than previously thought. The results may be related to the single drug quantity and chemical composition. In regard to the compounds, the top three compounds in degree were MOL000098-quercetin, MOL000422-kaempferol, and MOL003896-isoflavone. Quercetin, kaempferol, and isoflavones are all flavonoids. Modern pharmacology has confirmed that quercetin has anti-inflammatory, antibacterial, antioxidant, antiviral, antihistamine, vasodilation, regulation of immune function, and other effects (16), and can interact with viral surface proteins to block viral adhesion (17). Kaempferol has anti-infection, anti-inflammatory, anti-cancer, and other effects (18).Isoflavones have significant antioxidant activity and can scavenge free radicals (19). These findings indicate that Modified Ginseng-Schisandra Decoction may exert a synergistic effect through its main components, which jointly treat RRTI. In terms of the target, the top five degree values were PTGS2, ESR1, AR, PPARG, and NOS2. PTGS2/COX-2 is a key inducible enzyme that catalyzes prostaglandin synthesis in inflammation, which is enhanced in inflammatory stimulation, tissue damage, and other situations, and participates in the inflammatory response (20). Modern pharmacology has further confirmed that the anti-inflammatory activity of quercetin (21) and kaempferol (22)can act by mediating the expression of COX-2. Kaempferol could inhibit COX-2 expression in MCF-7 cell (23). Kaempferol-3-O-rutinoside inhibits macrophages from secreting inflammatory factors, such as TNF, like IL-6, TNF-α, COX-2 and iNOS (24). Quercetin reduces COX-2 and MPO expression in intestine ischemia reperfusion injury (25). The NF-κB pathway is inhibited by Quercetin (26). Isoflavone could also inflammation via regulating COX-2 and NF-κB pathway (27,28). Since Kaempferol, Quercetin and Isoflavone are the main components of Modified Ginseng-Schisandra Decoction, we speculated that the anti-inflammatory effect and treating repeated respiratory infection of Modified Ginseng-Schisandra Decoction might be mediated by the regulation of NF-κB and COX-2. However, there is no report on Modified Ginseng-Schisandra Decoction targeting COX-2 in the treatment of RRTI, and this should be investigated further. The results of the PPI network shows that STAT3, JUN, MAPK1, AKT1, MAPK3, etc. may be important target groups for the treatment of RRTI with Modified Ginseng Decoction. Among them, the STAT3 degree value was the largest, indicating that it may occupy a major position in the DDT network in this prescription. This is not consistent with PTGS2, ESR1, AR, PPARG and NOS2 being in the core position in the DDT network diagram of Modified Ginseng-Schisandra decoction. This discrepancy be due to the manner in which the Chinese herbal medicine was processed, whether it was decocted, and the specificity of target action, and thus warrants further study. STAT3 is an important node in the development of inflammation. It can regulate the biological behavior of tumor cells and immune cells by mediating extracellular signals of inflammatory mediators, and it is thus a central molecule in the process of inflammation (29). In summary, the Modified Ginseng-Schisandra Decoction may be used to target STAT3 to affect its normal physiological and pathological process in treating RRTI.

In summary, this study used the network pharmacology to conduct a preliminary theoretical investigation into the mechanism of the Modified Ginseng-Schisandra Decoction in the treatment of RRTI. The research results clarify the relationship between the main potential active ingredients and target genes of Modified Ginseng-Schisandra Decoction and the pathway of RRTI, providing new ideas for further in-depth exploration of the mechanism of action. The limited information in current databases and the lack of support of experimental results should be considered the limitations of our study. Despite this, the results can be used to direct future research, with further in-depth experimental investigation being needed in the future.

Reporting Checklist: The authors have completed the MDAR reporting checklist. Available at https://dx.doi.org/10.21037/tp-21-240

Conflicts of Interest: All authors have completed the ICMJE uniform disclosure form (available at https://dx.doi.org/10.21037/tp-21-240). The authors have no conflicts of interest to declare.

Ethical Statement: The authors are accountable for all aspects of the work in ensuring that questions related to the accuracy or integrity of any part of the work are appropriately investigated and resolved. The study was conducted in accordance with the Declaration of Helsinki (as revised in 2013).