The general clinical data of 22 children undergoing living donor liver transplantation between January 2013 and December 2015 were collected. These children were categorized into two groups: one group of children stopped using lamivudine one year after their operation (group 1, n=7), while the other did not (group 2, n=15).

The study was conducted in accordance with the Declaration of Helsinki (as revised in 2013). The study was approved by institutional ethics board of Tianjin First Center Hospital (2016N084KY) and informed consent was taken from all the patients.

During liver transplantation, basiliximab and glucocorticoid were used for immune system induction. After the operation, a routine immunosuppressive regimen was adopted (anti-rejection therapy with glucocorticoid and tacrolimus; glucocorticoids were usually stopped three months after operation).

Prevention and treatment plan of hepatitis B: All patients were treated with 25 mg of lamivudine daily combined with intermittent injections of hepatitis B immunoglobulins for antiviral therapy; a hepatitis B vaccine was administered one year after liver transplantation. For children with newly diagnosed hepatitis B, the drug was administered according to the age and weight of the child. Children over two years old and weighing >30 kg were treated with 0.5 mg of entecavir once a day for antiviral therapy. In this study, six newly diagnosed hepatitis B children were over two years old and weighed more than 30 kg, which was in accordance with the medication indications; another child developed hepatitis B at the age of 20 months and, taking into account the child’s condition, 0.5 mg of entecavir once a day was additionally given.

Group 1 consisted of seven children who stopped taking lamivudine 12–24 months after operation (this was a failure to follow medical advice). These children were injected intermittently with hepatitis B immunoglobulins for antiviral therapy, but six of them developed hepatitis B 17–50 months after liver transplantation. There were no new cases of hepatitis B in group 2, which consisted of 15 children who continued to take lamivudine. The difference between the two groups was statistically significant (P<0.05) (see Table 1). 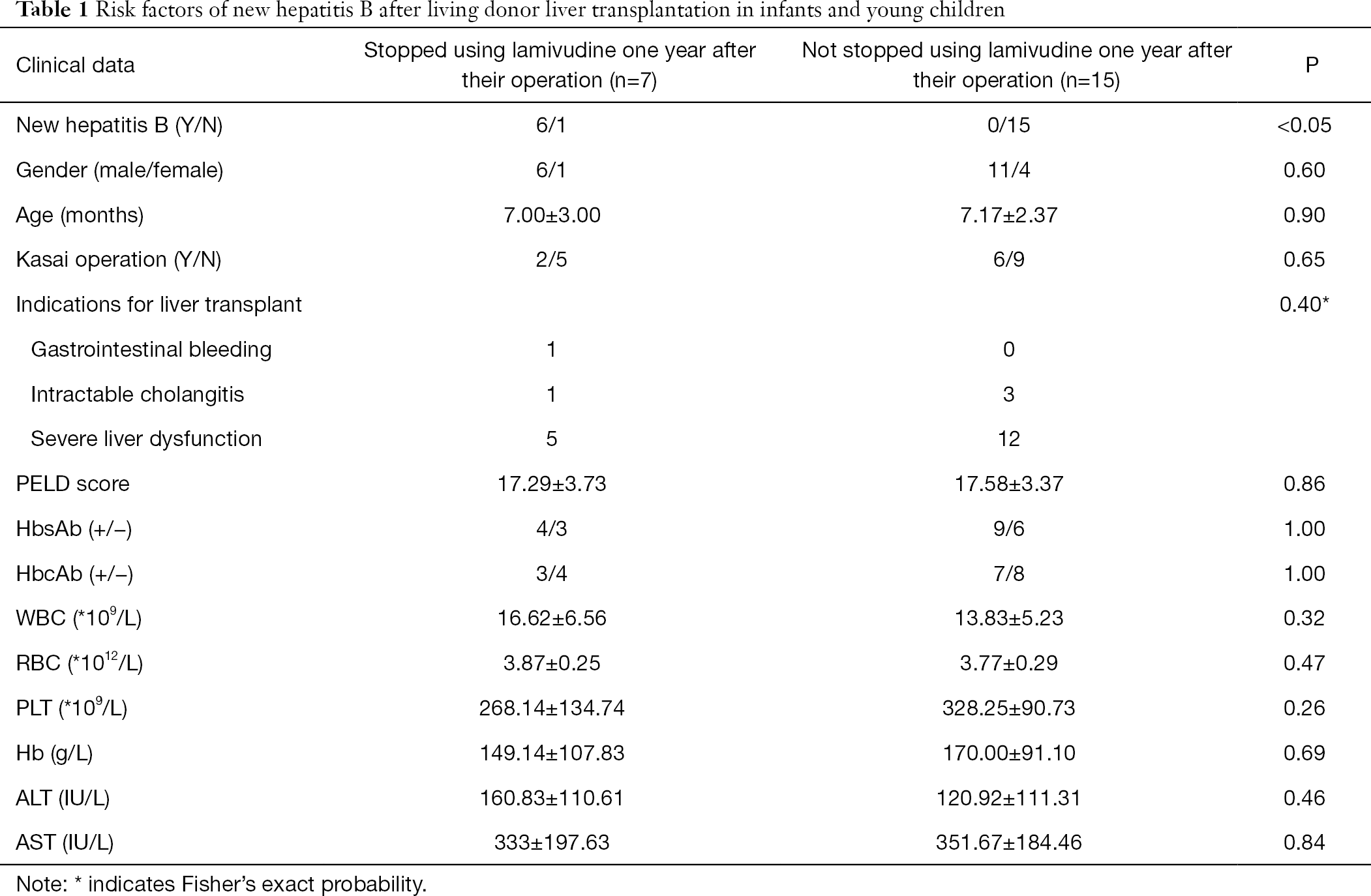 The effect of hepatitis B immunoglobulins alone for antiviral therapy

In group 1, six of the seven children developed new hepatitis B. The general clinical data before operation are shown in Table 2. These six children were all male, the median age was 8 [3–11] months old, the primary disease was congenital biliary atresia, and the pediatric end-stage liver disease (PELD) score was 17.17±4.07. Before operation, all 6 children tested negative for HBsAg and 3 tested positive for HBcAg. Their HBV DNA levels were <50 IU/mL. After discontinuation of lamivudine, the children were still injected intermittently with hepatitis B immunoglobulins to maintain the titer of hepatitis B immunoglobulins >100 IU/L; however, six of them were detected to be HBsAg (+) with HBV DNA >50 IU/mL at 24.33±13.95 months after operation (see Table 3, FK506 concentration was measured when hepatitis B virus infection is found). 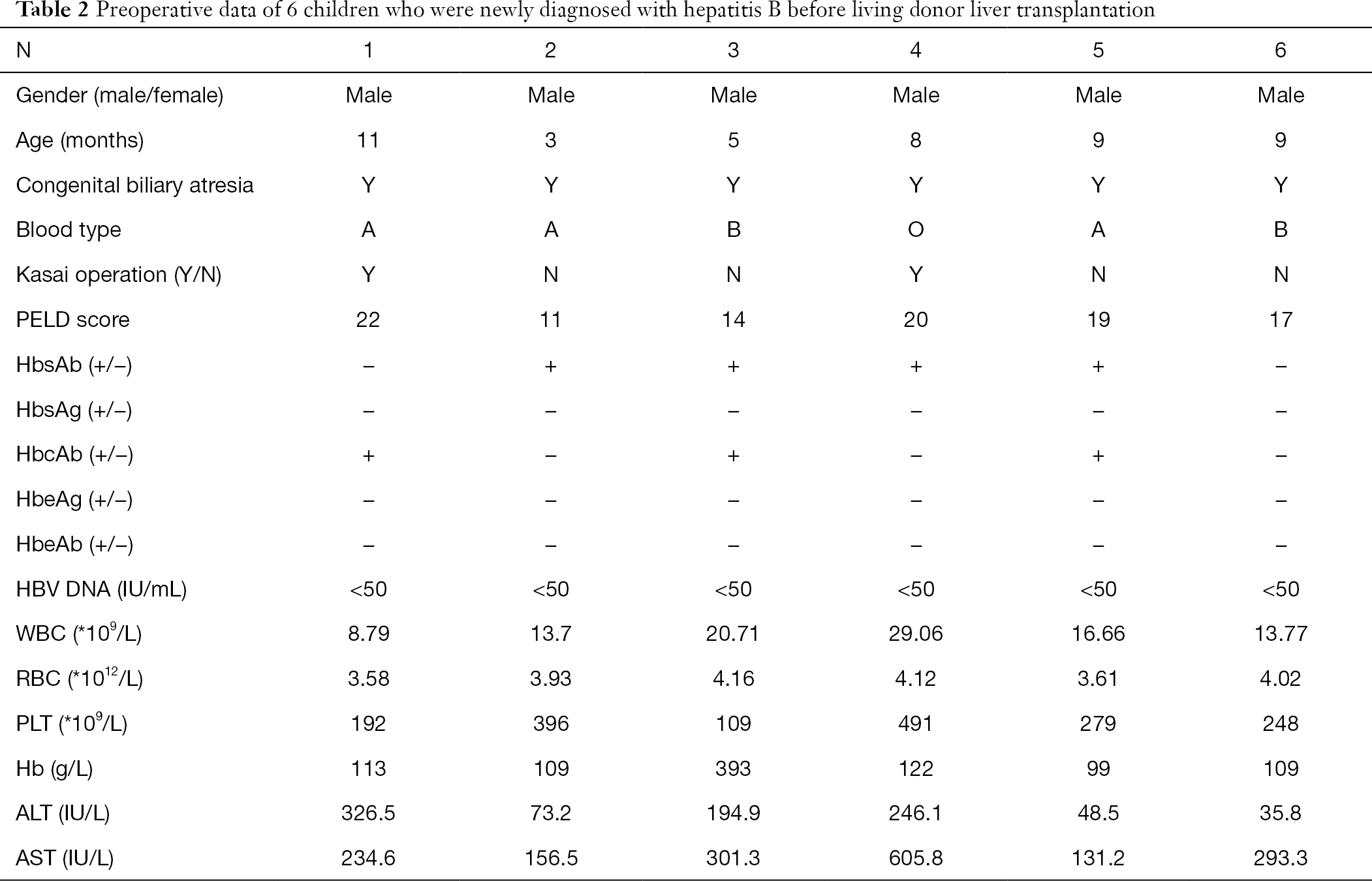 Of the 22 children, six were found to have new hepatitis B after operation, of which only one had abnormal liver function (ALT 539.5 IU/L, AST 160.8 IU/L, and ALP 279.0 IU/L). Of these six children, five were given 0.5 mg/d of entecavir for anti-HBV therapy, after which their HBV DNA decreased to normal levels (<50 IU/mL). In four of these children, HBsAg turned negative, but in one it did not. Another child was treated with lamivudine for anti-HBV therapy after the new onset of hepatitis B, resulting in their HBV DNA decreasing to a normal level (<50 IU/mL), but their HBsAg did not turn negative. All 6 children had normal liver function (see Table 4). 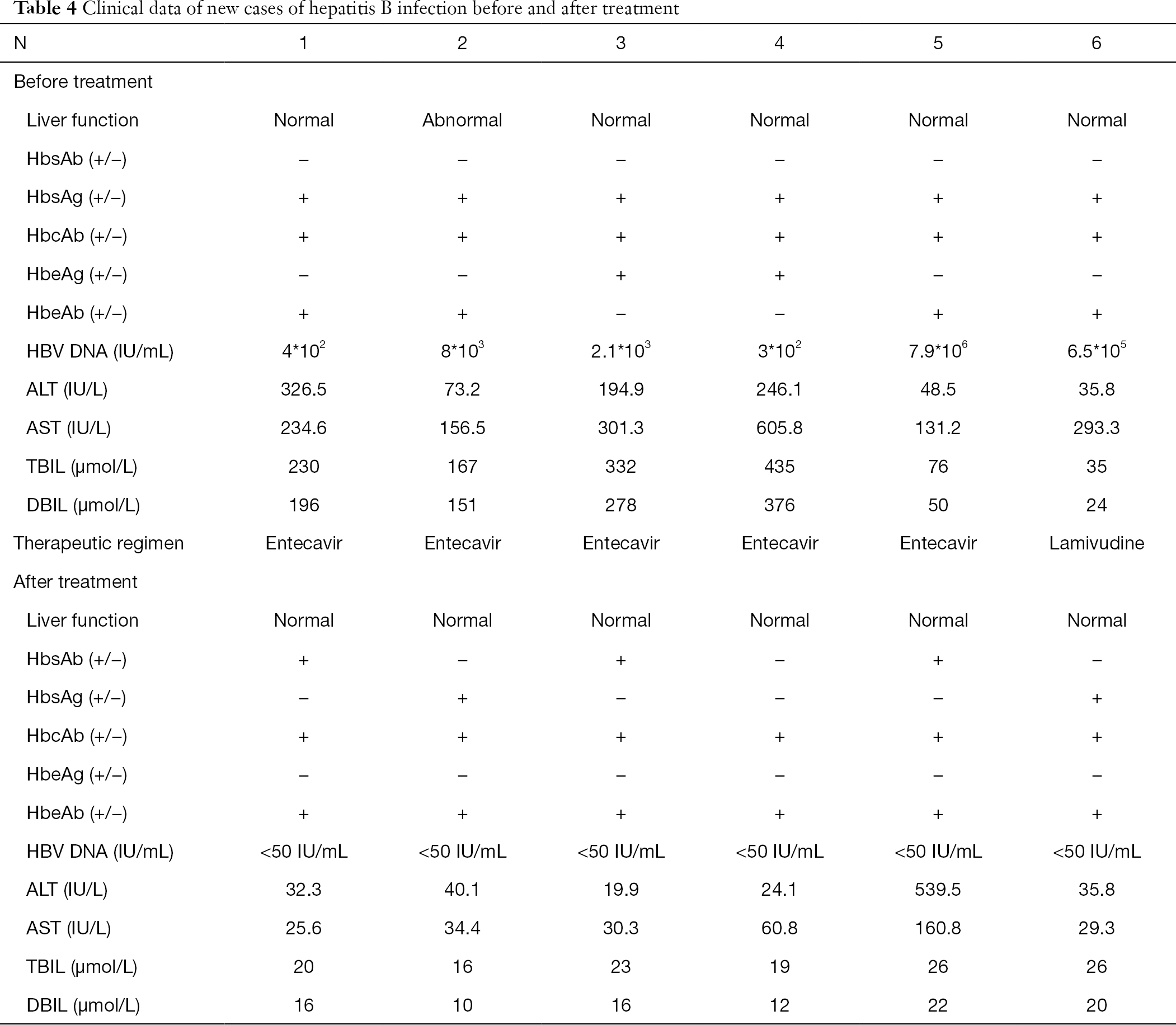 Liver transplantation is the best way to treat neonatal congenital biliary atresia. However, due to the shortage of donors, living donor liver transplantation can be the most time-efficient way to complete the operation. China is a big country with a higher number of hepatitis B carriers: the prevalence of HBsAg in China is about 5%, and it has approximately 70 million cases of chronic hepatitis B infection (5). As such, when a donor undergoes the preoperative examination, they are often found to be HBcAb positive, HBsAg negative, and to have HBV DNA <50 IU/mL. One study revealed that donated livers that are positive for HBcAb do not affect the long-term prognosis of patients, but preventive measures should be taken (6). A study in Spain also revealed that there is no significant difference in survival rate between positive HBcAb and negative HBcAb donors (68% vs. 76%, P>0.05) (7). Positive HBcAb indicates that HBV has been or is being infected and that HBV DNA replication exists in the body; the incidence of hepatitis B after operation therefore increases after a positive HBcAb liver is used as the donor liver, and effective preventive measures should be taken to prevent new hepatitis B after operation (8).

The results of a previous study revealed that the incidence of new hepatitis B after living donor liver transplantation in children was closely related to positive donor HBcAg (12). The present study retrospectively analyzed the data of 22 children who were treated with hepatitis B immunoglobulins combined with lamivudine. In group 2 there was no new onset of hepatitis B, and no side effects occurred, thereby demonstrating the safety and effectiveness of the treatment. In group 1, six of the seven children (85.71%) developed new hepatitis B at 24.33±13.95 months after operation, revealing that the effect of hepatitis B immunoglobulins alone in the prevention of new hepatitis B is poor. This is consistent with the findings of a previous study (13).

In the present study, the routine detection of HBV undertaken in some children after operation found that only HBsAg was positive, but there was still a risk of new hepatitis B after operation. The main reason for this may be that there is covalently closed circular DNA (cccDNA) in the nucleus of the liver, and antiviral therapy cannot completely eliminate cccDNA. This highlights the necessity for antiviral drugs to be used continuously (14). The present study revealed that using a combination of lamivudine and hepatitis B immunoglobulins in the prevention of new hepatitis B after liver transplantation is effective and that the incidence of new hepatitis B was significantly higher after stopping lamivudine. The findings of Chen et al. suggested that the use of lamivudine alone is more effective in the prevention of new hepatitis B after liver transplantation but that combining it with hepatitis B immunoglobulins does not make it significantly more effective (15).

Of the six children who had new onset hepatitis B in group 1, five were given entecavir antiviral therapy after detection of the virus—only one child resumed the use of lamivudine. After treatment, the HBV DNA of all six children decreased to normal levels (<50 IU/mL). Of the five children who were given entecavir, the HBsAg of four of them turned negative, while in one it did not. This indicates that entecavir has a significant effect in the treatment of postoperative new hepatitis B in children. However, in the children treated with lamivudine, although the virus replication turned negative, HBsAg was still positive.

Currently, antiviral drugs approved for the treatment of chronic hepatitis B in children include interferon α, lamivudine, entecavir, adefovir dipivoxil, and tenofovir (22). However, there is no perfect treatment for new hepatitis B after liver transplantation in children. In this study, entecavir was used to treat new onset hepatitis B after liver transplant, in which it proved effective. However, due to the small number of cases analyzed in this study, and the fact that it was a retrospective study, its conclusions are limited. A prospective randomized controlled study with an expanded sample is needed.

We would like to acknowledge the hard and dedicated work of all the staff that implemented the intervention and evaluation components of the study. We would like to thank Sandra Mazariegos for his help in polishing our paper.

Reporting Checklist: The authors have completed the STROBE reporting checklist. Available at http://dx.doi.org/10.21037/tp-20-485

Conflicts of Interest: All authors have completed the ICMJE uniform disclosure form (available at http://dx.doi.org/10.21037/tp-20-485). The authors have no conflicts of interest to declare.

Ethical Statement: The authors are accountable for all aspects of the work in ensuring that questions related to the accuracy or integrity of any part of the work are appropriately investigated and resolved. The study was conducted in accordance with the Declaration of Helsinki (as revised in 2013). The study was approved by institutional ethics board of Tianjin First Center Hospital (2016N084KY) and informed consent was taken from all the patients.