Among all cases of intellectual disability or global developmental delay, it is estimated that copy-number variations (CNVs) and X-linked and autosomal-recessive inherited conditions are responsible for 25%. The novel heterozygous monogenic variants are the main cause of mental retardation. By using DNA sequencing technology, the pathogeny of 40% of severe mental retardation has been revealed (1,2). Arboleda-Tham syndrome (OMIM#616268) is a newly neurodevelopmental disorder, caused by variants in the KAT6A gene (also known as MOZ, MYST3; NM_006766.5) located on chromosome 8q11.21. The KAT6A gene, codes for one member of the histone acetyltransferase (HAT) family MYST. Collectively, HAT and histone deacetylase (HDAC) enzymes play key roles in essential cellular processes including the cell cycle, metabolism, apoptosis, and stem cell maintenance through remodeling chromatin (3,4). The transcription factors Runx1 and Runx2 are directly regulated by the KAT6A gene by its serine- and methionine-rich domain (5,6).

To our knowledge, a total of 85 similar cases and gene studies of Arboleda-Tham syndrome have been reported to date since it was first recognized in 2015 by Arboleda et al. (1-24). These probands have common clinical manifestations such as global developmental delay, including severe speech disability, significant craniofacial dysmorphism, and primary microcephaly, as well as more varied concomitant features including feeding problems, ocular anomalies, and cardiac defects which provide a suspicion of this disease and finally diagnosed by the gene analysis (7). Herein, we report an additional Arboleda-Tham syndrome case with a new clinical phenotype and genotype. In addition, we summarized the research of the phenotypic and genetic spectrum from the reported KAT6A cases.

We present the following article in accordance with the CARE reporting checklist (available at http://dx.doi.org/10.21037/tp-21-206).

The patient was a boy aged 1 year 3 months who was admitted to our hospital due to obvious growth retardation and intellectual disability for 1 year. His parents noticed these problems including deteriorating growth retardation, intellectual disability with medium speech impairment, motor delay, cryptorchidism, and inguinal hernia. The boy was born to a nonconsanguineous couple, and the mother was a thalassemia gene carrier. During the third trimester, the proband’s mother suffered from cholestasis and gestational diabetes.

All procedures performed in studies involving human participants were in accordance with the ethical standards of the institutional and/or national research committee(s) and with the Helsinki Declaration (as revised in 2013). Written informed consent was obtained from his parents.

The child displayed abnormal parameters of growth indicators such as raising his head at 4 months of age, rollover at more than 7 months of age, sitting without help at 1 year of age, and did not speak any meaningful words, such as papa and mama, for communication. His DQ scores of language, adaptation, gross motor, fine motor, and personal social functioning on the Gesell developmental scales were 65, 75, 70, 80, and 75 respectively, revealing that speech impairment was the prominent disability.

DNA was extracted from peripheral blood samples, and WES was performed. Sanger sequencing was used to verify the mutations in the proband, and the variant was classified following the 2015 guidelines of the American College of Medical Genetics (ACMG). A normal karyotype (46, XY) was determined, indicating no relevant CNVs to explain the proband’s clinical features. A novel variant, c.57delA, was detected in KAT6A of the proband, which is a nonsense mutation leading to an amino acid change, p.Val20*. There were no relevant variants in the parents’ genotypes, which were normal (Figure 2). The de novo variant in the proband and his parents was detected by Sanger sequencing and met the criteria to be identified as a pathogenic variant: PVS1+PS2+PM2 according to the 2015 ACMG guidelines. This new variant has never been previously described in the databases of genes. 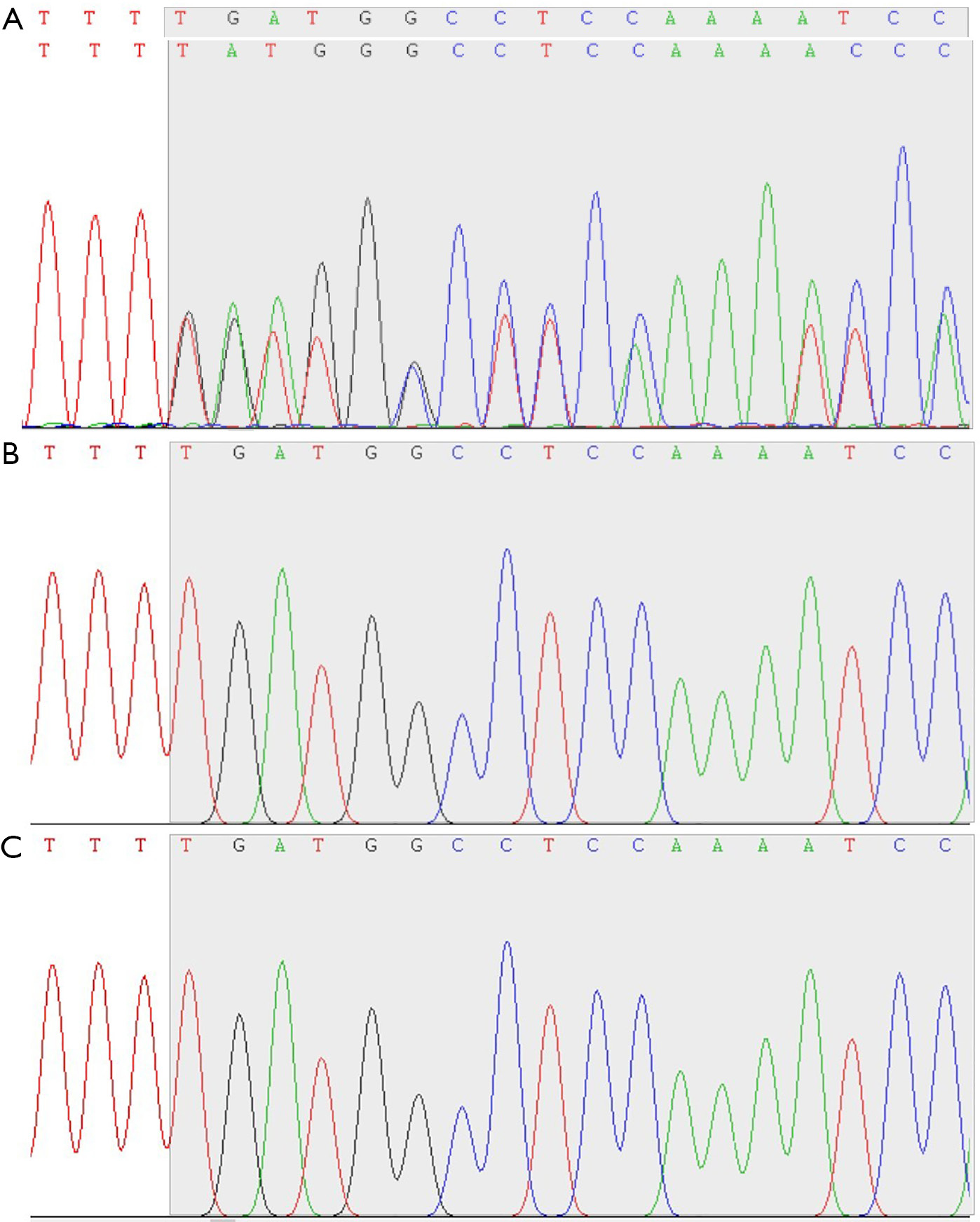 The patient was initially diagnosed with cryptorchidism and received the testis reduction and orchiopexy when he was 1 year old. Then based on the clinical manifestations and genetic mutation, the diagnosis of Arboleda-Tham syndrome was clear. Arboleda-Tham syndrome is a newly identified neurodevelopmental disorder caused by variants in the KAT6A gene. Then the patient received rehabilitation and nutritional intervention, and was followed up regularly for every 3 months. After nutritional intervention, his physical growth is normal, and the testicle is located in the scrotum after surgery. With rehabilitation training, he can say dad, mum, grandfather, grandmother and other simple words. But there is no targeted therapy for this disease at present.

The clinical features noticed in our patient which were characteristic of Arboleda-Tham syndrome including developmental delay, speech delay, microcephaly, lateral auricle collapse, binaural medial fistula, large forehead, thin upper lip, right oblique inguinal hernia, and right cryptorchidism (8-13). Notably, the binaural medial fistula and lateral auricle collapse observed in our patient had never been reported previously. Contrary to other reported cases, our patient had an abnormally high level of serum ALP when he was 10 months old. Based on the research about KAT6A regulation of the bone marrow-derived mesenchymal stem cells through Nrf2/ARE signaling pathway, we inferred that the level of the ALP may also be influenced by this way. But existence of abnormal level of serum phosphatase alkaline in this patient may also be coincidental and further research is needed to confirm this potential relationship (14).

All previously reported cases of Arboleda-Tham syndrome had intellectual disability, global developmental delay, and craniofacial dysmorphism. Among the various craniofacial dysmorphisms, bulbose or broad nasal tip was the most common (85%). Others include eye abnormalities (proptosis, palpebral ptosis, hypertelorism, deep set, and strabismus), ear anomalies (large, low set, rotated, small earlobe), thin upper lip, bitemporal narrowing, microcephaly, frontal bossing, large forehead, and micrognathia. Some of the clinical manifestations including microcephaly, craniofacial dysmorphism, and cardiac defects may be found by the ultrasound exam at the fetal period and the prenatal genetic analysis would be conducted under the guidance of multi-disciplinary team (MDT). Notably, among the reported ear abnormalities, the binaural medial fistula and lateral auricle collapse observed in our patient have never been mentioned. This new clinical manifestation in Arboleda-Tham syndrome especially extended phenotype of ear. However, speech delay or absent speech were observed in 99% of the subjects. Neonatal hypotonia occurred in 62.0% of the subjects, and abnormal gait was identified in 67% of the subjects when they started walking. Other manifestations mainly include seizures, congenital heart disease, and recurrent infections (Table 1) (3-5,7,13,17-25). Recurrent infections have been observed in 52% of reported patients, among which 71% of subjects carry late truncating variants (7). This finding is consistent with the theory that KAT6A plays an essential role in the long-term repopulation of hematopoietic stem cells (8). The study from Good-Jacobson et al. demonstrated that KAT6A is of great importance in lymphocyte differentiation. Their study showed that the absence of KAT6A resulted in significant impairments in the ability of germinal center B cells to generate dark zone centroblasts, and damaged both BCL-6 expression and cell-cycle progression (9). In this way, mutations of the KAT6A gene lead to impairments in immune functions, with increased susceptibility to recurrent infection. 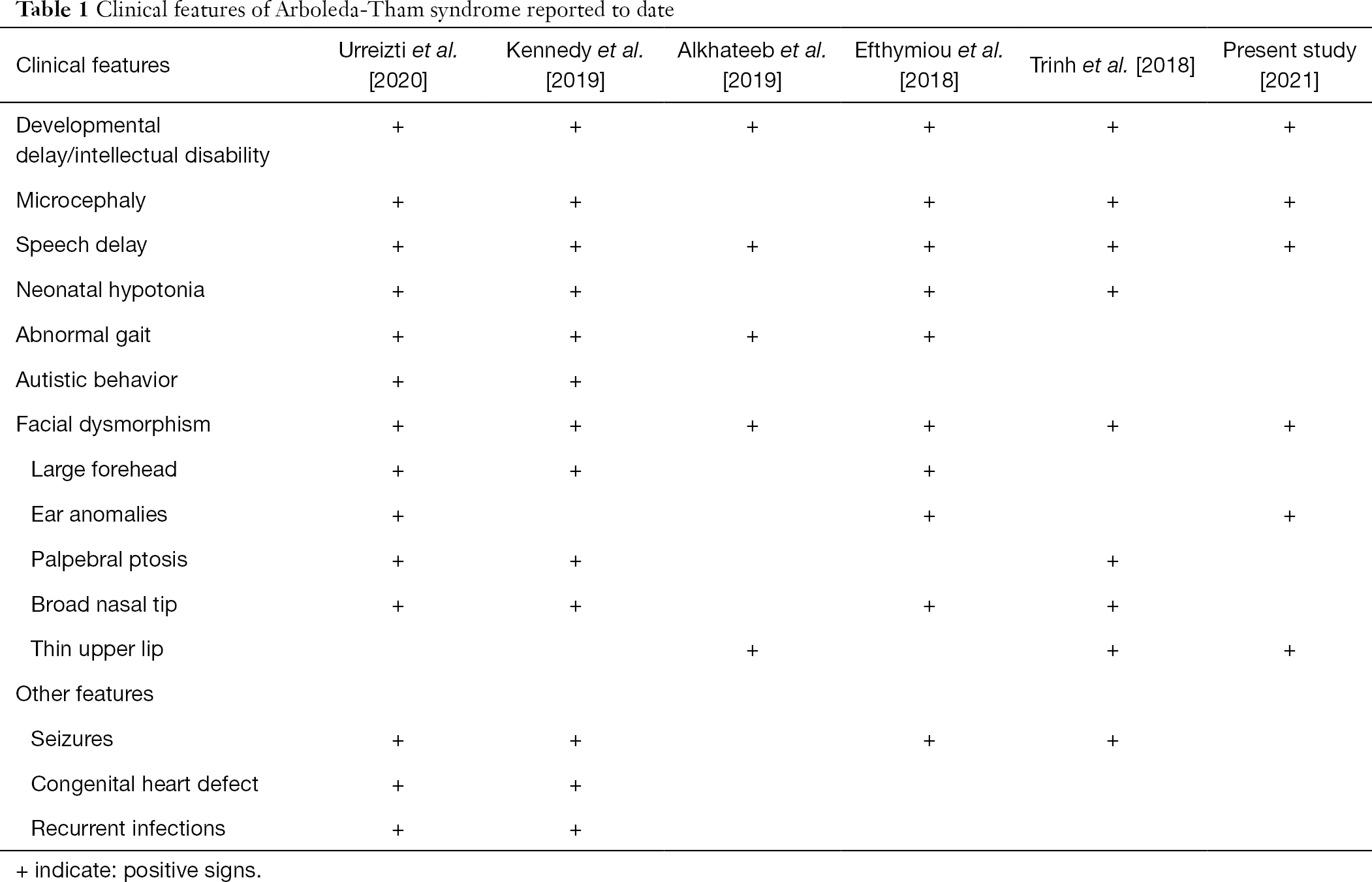 The boy was born to a nonconsanguineous couple, and the mother was a thalassemia gene carrier. The KAT6A gene, also named MOZ or MYST3 and located on chromosome 8q11.21, was known earlier as a fusion protein in patients with acute myelogenous leukemia (10). While the thalassemia gene is located on 11p15.4. There is no correlation between them by reviewing the researches before. KAT6A is found in the majority of tissues in the human protein atlas including the brain and heart. The gene consists of 18 exons (16 coding), and encodes a member of the HAT family, MYST. The HAT complex acetylates lysine-9 residues in histone H3 (H3K9), which is related to transcriptionally active genes. As previous studies have demonstrated, histone deacetylation is associated with transcriptional silencing. In this way, the KAT6A gene is involved in the regulation of a multitude of genes, which play essential roles during the progression of human growth and development (11). There are 5 functional domains in the KAT6A gene: a double-plant homeodomain finger that binds to acetylated histone H3 tails, a nuclear localization domain, a histone-acetyl-transferase domain, an acidic glutamate/aspartate-rich region, and a serine/methionine-rich region that can directly bind and regulate the transcription factors Runx1 and Runx2 (11-13) (Figure 3). Previous studies have demonstrated that in rodents, KAT6A is expressed in most tissues from embryos to adult mice, and is significantly important for the development of the skeleton, the hematopoietic system, and the thymus (11-13). Voss et al. reported that inserting a neo coding sequence into exon 16 in a KAT6A gene homozygous knockout mouse model resulted in severe detriments including craniofacial and heart abnormalities as well as normal hematopoietic cells (11). Moreover, the research showed that mice heterozygous for C-terminal deletion displayed an intermediate phenotype compared to the homozygous and wild-type mice regarding the number and function of hematopoietic progenitor cells. Further analysis of Hox gene expression demonstrated that the effect of the KAT6A gene was dose-dependent (8,11-13). These genetic analyses were reinforced with other relevant research in zebrafish illustrating that KAT6A is essential to the renewal of neural stem cells and the normal development of pharyngeal segments (8).

Our report refines the genotype-phenotype map of Arboleda-Tham syndrome and expands the mutant spectrum of the KAT6A gene.

The authors thank the family members of the patient for providing blood samples, co-operating with therapeutic strategies, and agreeing to participate in this study.

Reporting Checklist: The authors have completed the CARE reporting checklist. Available at http://dx.doi.org/10.21037/tp-21-206

Conflicts of Interest: All authors have completed the ICMJE uniform disclosure form (available at http://dx.doi.org/10.21037/tp-21-206). The authors have no conflicts of interest to declare.

Ethical Statement: The authors are accountable for all aspects of the work in ensuring that questions related to the accuracy or integrity of any part of the work are appropriately investigated and resolved. All procedures performed in studies involving human participants were in accordance with the ethical standards of the institutional and/or national research committee(s) and with the Helsinki Declaration (as revised in 2013). Written informed consent was obtained from his parents.