Persistent fifth aortic arch (PFAA) is an extremely rare congenital cardiovascular malformation that is believed to originate from the failed degeneration of the fifth pharyngeal (aortic) arches during embryogenesis. The PFAA was first identified in animal models by Brown in 1913 (1) and by Huntington in 1919 (2), described as a vascular bypass arising from the ascending aorta and connecting to the descending aorta, distinct from the fourth aortic arch. Subsequently, Van Praagh (3) in 1969 reported and defined the first human case of PFAA, characterized by a double-lumen aortic arch. PFAA has been associated with complex cardiac defects (4-7) and to some extent, its presence has been beneficial for hemodynamic stabilization (8). In pediatric cardiology, echocardiography is accessible, easy to operate, and an accurate diagnostic modality, with a reported diagnostic rate as high as 62.5% for PFAA (9). The objective of this article is to improve the understanding and diagnosis of PFAA through a single-center experience by comprehensive echocardiographic evaluation combined with computed tomography angiography (CTA) when necessary. We present the following article in accordance with the AME Case Series reporting checklist (available at http://dx.doi.org/10.21037/tp-20-433).

In this retrospective study, five cases of PFAA were identified and reviewed at the Affiliated Children’s Hospital of Capital Institute of Pediatrics from October 2016 to September 2019. Data were collected and analyzed from the medical records, including physical manifestations, comprehensive echocardiographic examinations (Philips IE 33 with a 5-1 probe), CTA assessments, and cardiovascular surgical reports. This retrospective study was approved by Ethics Committee of Capital Institute of Pediatrics board of No. SHERLLM2021003 whereby individual consent was waived and conducted in accordance with the Declaration of Helsinki (as revised in 2013).

Details of patient information and echocardiographic findings of all five cases are summarized in Tables 1,2. There were three males and two females between the age of 3 to 48 months, between the weight of 4 to 12 kg. Three cases (Cases 1, 2 and 3) were first admitted to our center for symptoms such as coughing, fever, breathing difficulty, and heart murmur; whereas two cases (Cases 4 and 5) had no initial symptoms. Case 4 was admitted for a routine health examination while Case 5 was screened for congenital heart disease. The diagnosis of PFAA was initially missed by echocardiography in Cases 1 and 2 but later confirmed by CTA for stenosis of aortic arch. In Cases 3–5, echocardiography using two-dimensional and color Doppler directly diagnosed the presence of PFAA. Based on the Freedman classification (8,10), all five patients in our retrospective analysis had systemic-to-systemic PFAA (Type 1), and not systemic-to-pulmonary (Type 2), pulmonary-to-systemic (Type 3), or bilateral PFAA (Type 4) (Table 3). 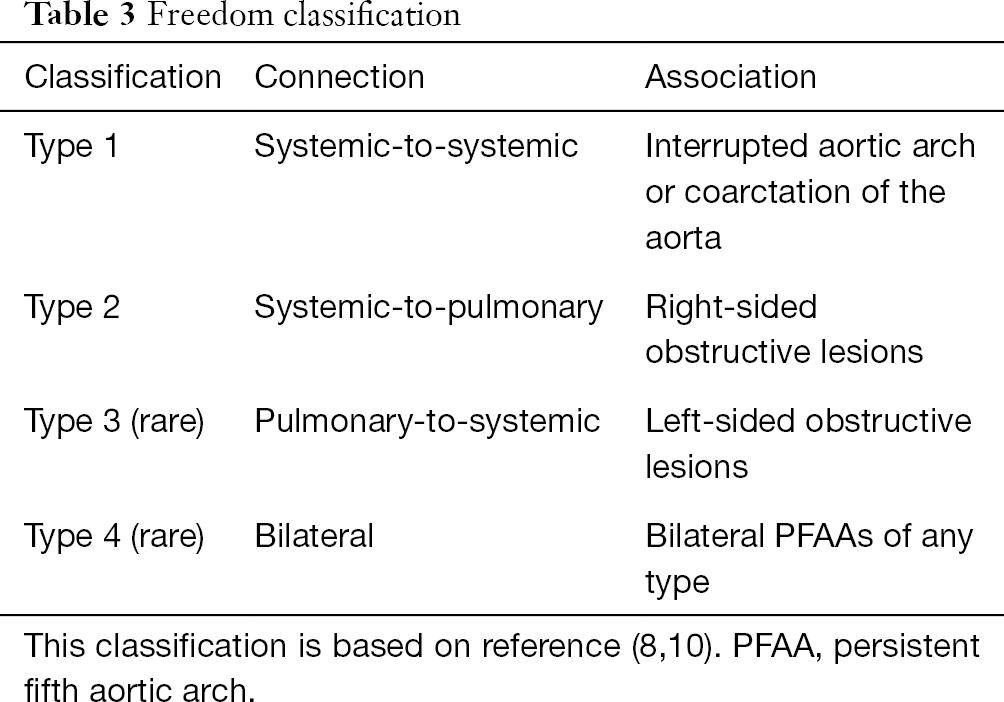 Two cases (Cases 1 and 3) showed interruption of the 4th aortic arch with the presence of a severely stenotic PFAA. Cases 1 had abnormal blood pressure gradient differences between their left upper limb and left lower limb, and an enlarged left heart and reduced ejection fraction (41%). Echocardiography did not distinguish a PFAA but was later confirmed by CTA and underwent cardiovascular surgery. During the procedure, the stenosis PFAA segment was removed and the 5th arch anterior wall was widened by treated-glutaraldehyde autologous pericardium. Thereafter, the whole 5th arch was anastomosed with the descending aorta (Figure 1). This patient had an uneventful recovery. Case 3 was diagnosed by echo and refused for further CTA examination and care, then were lost for follow-up. 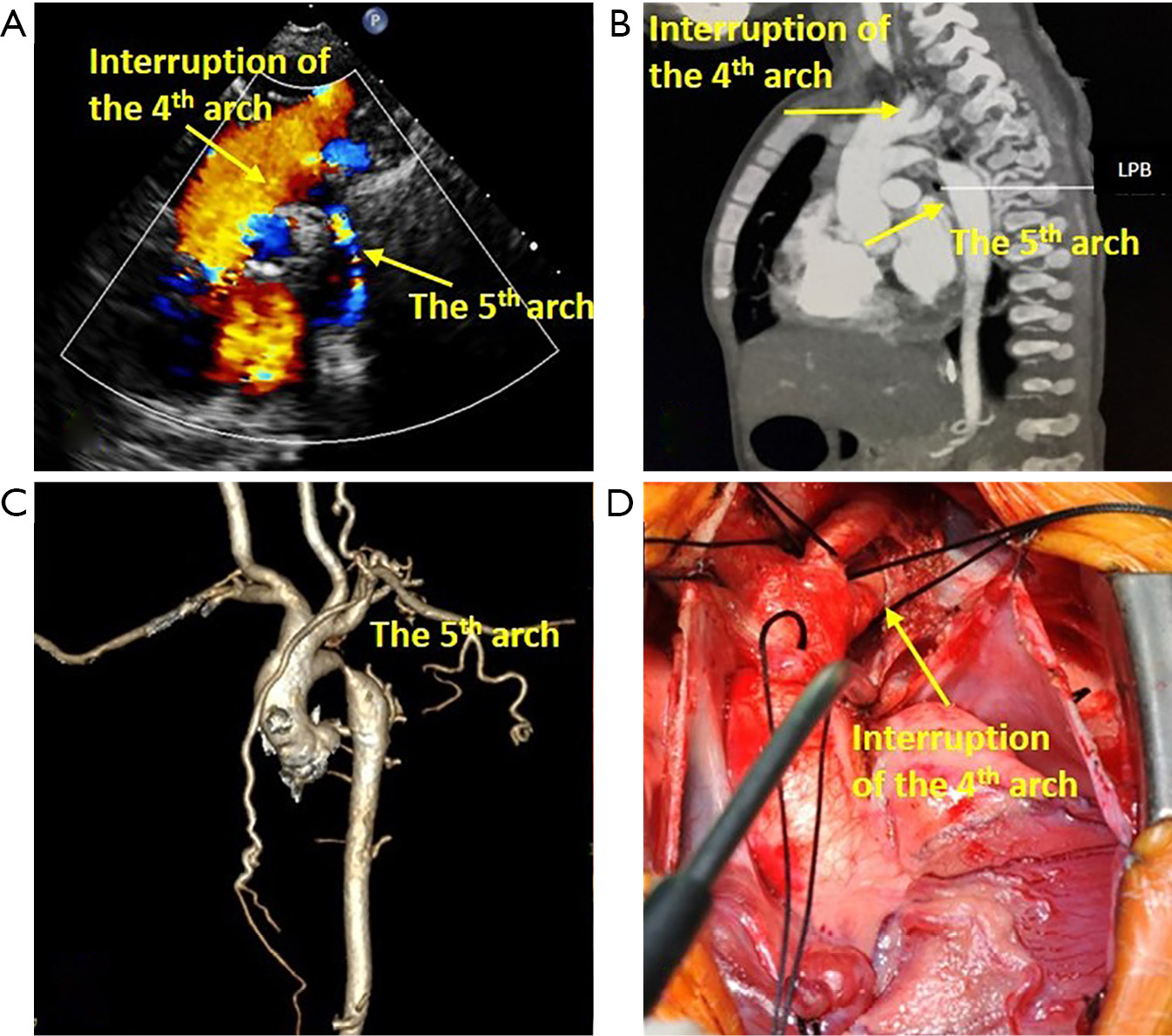 Three cases (Cases 2, 4, and 5) had interruption of the 4th aortic arch with a normal presence of PFAA: one combined with a small muscular ventricular septal defect (VSD), one with a small patent ductus arteriosus (PDA), and one with an atrial septal defect (ASD). Cases 2 was initially diagnosed with a large ASD and mild aortic arch stenosis by echocardiography. However, this patient was later diagnosed with a PFAA and coarctation of aortic arch by CTA. Due to the blood pressure differential between the lower and upper limbs, the patient was scheduled for surgery. During the procedure, remnants of the 4th arch was observed as a ligament which connects the left subclavian artery and PFAA, meanwhile PDA as another ligament connects the PFAA and pulmonary artery. These two ligaments resulted in a tortuous PFAA. After removing both ligaments and the surrounding connective tissue, the blood pressure gradient equalized between the upper and lower limbs (Figure 2). The other two patients did not require surgery and were scheduled for a follow-up assessment (Figure 3). 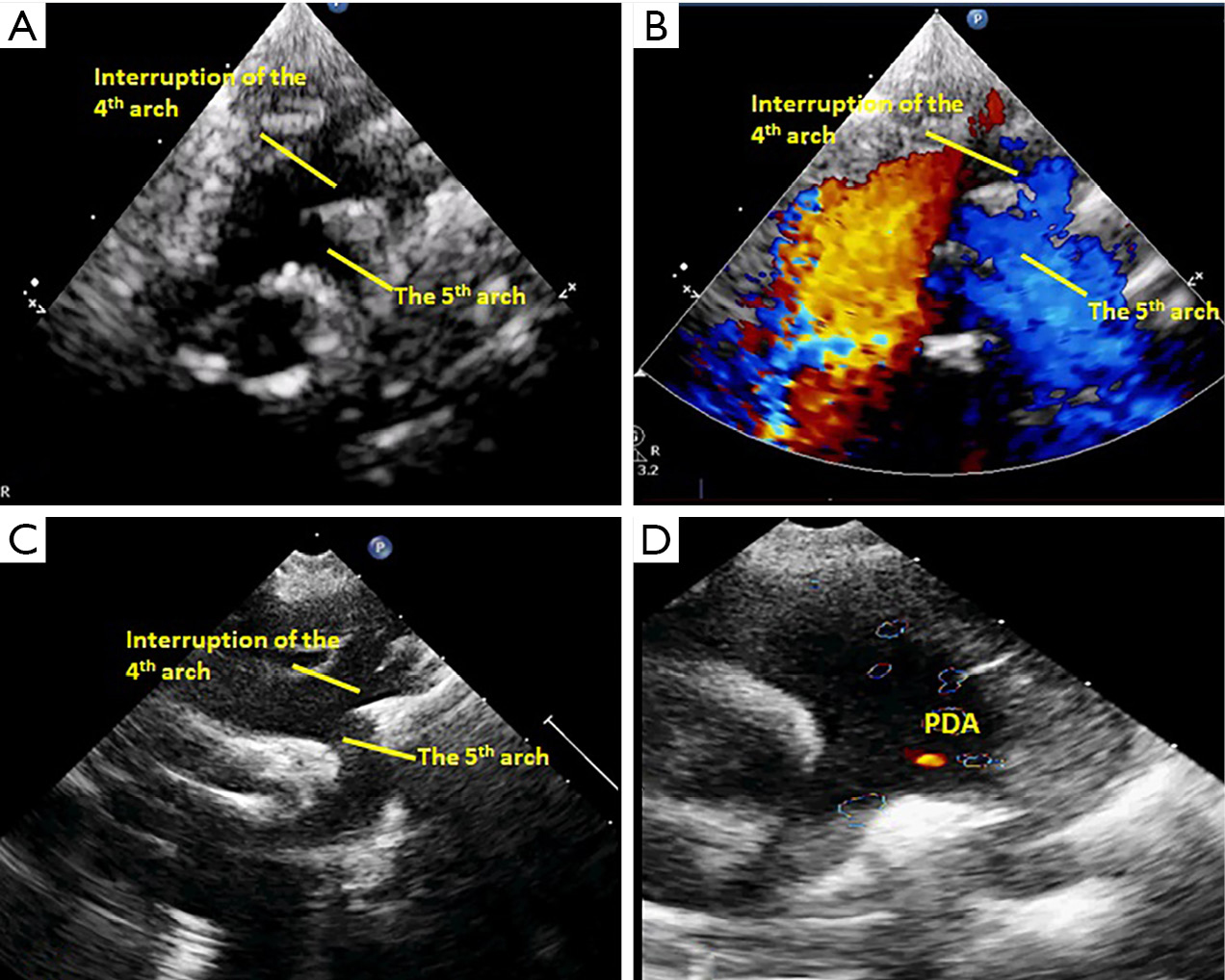 The existence of a fifth aortic arch in mammals has been debated for over the past century (2). Typically, vertebrate embryos develop six pairs of pharyngeal (aortic) arch arteries. During the development of the great arteries, the primitive bilateral fifth aortic arches either do not form or degenerate mostly at the 4th week of embryonic life (11). If one or both of the fifth aortic arches persist in the process of arterial loop formation, it can emerge as a PFAA (12). In 1969, Van Praagh reported the first human PFAA case with a double-lumen aortic arch (3), and Gerlis supported the existence of a pair of fifth arch arteries in human embryos at a prevalence of 0.3% from post-mortem specimen examinations (13). Subsequently, the PFAA was classified into four types based on anatomical and physiological characteristics by Freedom et al., including system-to-system (Type 1), system-to-pulmonary (Type 2), pulmonary-to-system (Type 3), and bilateral (Type 4) (Table 3) (10). Based on the Freedman classification, all 5 patients in our study had Type 1 systemic-to-systemic PFAA with interrupted 4th aortic arch. In 2016, Gupta raised a new concept about the PFAA based on a murine model, which was an extra-pericardial vessel arising from the ascending aorta proximal to the brachiocephalic artery origin, and terminating either on the dorsal aorta or on the pulmonary arteries via the PDA (14). According to Gupta’s definition, the incidence of PFAA would be extremely rare, and it is categorized as collateral channels because it should have a larger PDA connecting with PFAA (15), Whereas in our study, only one case had a narrow PDA.

In our study, two patients had a severely stenotic PFAA. In the case of severe stenosis, the lower limbs had decreased blood flow and pressure, resulting in a larger blood pressure gradient difference between the upper and lower extremities upon physical examination. Furthermore, the increased left ventricular afterload caused by PFAA stenosis contributed to the manifestation of congestive heart failure (16).

In two other patients, the PFAA and descending aorta did not have any significant signs of stenosis, abnormal hemodynamics, nor clinical symptoms. These cases did not require any surgical procedure and were scheduled for a follow-up assessment. Therefore, timely diagnosis and characterization of the PFAA are important for surgical and treatment strategies because of the associated narrowing of the aortic arch and related symptoms in these cases.

The PFAA has been previously diagnosed directly by the use of echocardiography (17). Echocardiography can display the exquisite anatomy of the aortic arch, and the suprasternal notch view is the most useful as it can show the whole aortic arch in the para-sagittal plane (18). Additionally, scanning the whole aortic arch in the suprasternal notch view is also very beneficial to understand the spatial relationship between the 5th aortic arch and the branches of the aortic arch (4th left aortic artery). In two of our cases, the patients had a blood pressure differential between upper and lower limbs. We only focused on the stenosis of the aortic arch but ignored other potential conjunction. Therefore, we were limited to identify the descending aorta stenosis other than PFAA. Therefore, we believe careful scanning of the whole aortic arch and the origin of the branches is significant for improving the accuracy of a PFAA diagnosis. It is necessary to pay special attention to the abnormal shape of the aortic arch or accelerated blood flow in the suprasternal long-axis view. Echocardiography can provide the earliest detection of the 5th aortic arch and other lesions. In patients with a stenotic PFAA, further CTA examination is suggested to get a detailed picture of the aortic arch in preparation for surgery. Magnetic resonance imaging and CTA are generally considered the preferred imaging modality to accurately display the anatomical relationships between the major vasculature and surrounding vessels (19). For patients diagnosed with a normal PFAA without any other severe congenital heart disease, then only a follow-up assessment is required. Surgery or CTA examination are not necessary. We believe that surgical intervention is recommended for children with a stenotic descending aorta, and echocardiography can evaluate the surgical outcomes and postoperative follow-up. This paper focuses on presenting data, stating result and reaching a conclusion accordingly.

Our understanding of the origins of the embryological derivation of the so-called “persistent fifth aortic arch” in humans remains controversial, but continues to improve with increasing evidence in the literature. It is necessary to accurately diagnose the abnormal structures of the aortic arch and associated abnormalities to ensure the most suitable strategy for treatment and management.

We would like to thank Fu-Tsuen Lee for his help in polishing our paper.

Conflicts of Interest: All authors have completed the ICMJE uniform disclosure form (available at http://dx.doi.org/10.21037/tp-20-433). The authors have no conflicts of interest to declare.

Ethical Statement: The authors are accountable for all aspects of the work in ensuring that questions related to the accuracy or integrity of any part of the work are appropriately investigated and resolved. The study was conducted in accordance with the Declaration of Helsinki (as revised in 2013). The study was approved by Ethics Committee of Capital Institute of Pediatrics board of No. SHERLLM2021003 and individual consent for this retrospective analysis was waived.