Sepsis is the response of the immune system to invasive infection, which is the main cause of morbidity and mortality in the intensive care unit (ICU) globally, and the disease burden is extremely high (1-3). Although early identification and appropriate immediate management of sepsis were reported to be associated with better prognosis and outcomes (4), early diagnosis of this syndrome remains challenging. Hundreds of studies have investigated possible promising early diagnostic biomarkers for sepsis (5-7). In fact, the early biomarkers of sepsis reported in the literature have exceeded 100 and continue to increase, but none were proven to be consistently useful in the early diagnosis of sepsis. Among them, the most commonly mentioned biomarkers were C-reactive protein (CRP), procalcitonin (PCT) and in particular, the neutrophil CD64 index (nCD64 index).

CD64 is also called high-affinity immunoglobulin Fc-γ receptor I (8). The nCD64 index has been investigated for years as a biomarker of infection and sepsis, given its reported low baseline expression and quick increase after inflammation (9). Moreover, several authors have also reported its value as an indicator of sepsis severity, prognosis and outcomes. Dai et al. (10) performed the diagnostic value of the neutrophil CD64 index for neonatal sepsis in 7 studies, and the pooled sensitivity and specificity were 80% (95% CI: 69–88%) and 83% (95% CI: 71–90%), respectively. Thiriet et al. (11) performed a prospective analysis in adults in the ICU and showed that the nCD64 index was a possible diagnostic marker of sepsis with good sensitivity and specificity (78% and 70%, respectively). Moreover, the author performed repeated measurements of the nCD64 index, which showed that it may help improve the accuracy of the diagnosis of sepsis. El Shimi et al. (12) observed significantly higher baseline neutrophil CD64 levels in deceased patients than those in recovered neonates, which indicated its predictive value for disease outcomes. However, most studies have focused on populations of neonates and adults, and childhood sepsis has seldom been observed. Moreover, few studies have focused on the change in the nCD64 index during treatment and its influence on disease prognosis.

We present the following article in accordance with the STROBE reporting checklist (available at http://dx.doi.org/10.21037/tp-21-63).

This prospective study was implemented on participants admitted to the PICU of Anhui Provincial Children’s Hospital between 2018 and 2019. Patients who exhibited the clinical signs of sepsis at admission were enrolled as the sepsis group. The nonsepsis group included those with no symptoms or signs of infection. Two pediatricians independently classified the diagnosis as sepsis or no sepsis at the time of admission.

In the present study, sepsis was defined as systemic inflammatory response syndrome (SIRS) caused by suspected or confirmed infection. The diagnosis of SIRS was based on at least two clinical criteria: hyperthermia (rectal temperature >38 °C) or hypothermia (rectal temperature <36 °C), tachycardia, tachypnea, and white blood cell (WBC) count <4×109/L or >12×109/L. Furthermore, a child with sepsis had damaged function of at least one organ, such as consciousness changes, hypoxemia, increased levels of serum lactic acid and a fast pulse.

We excluded patients who were neonates or those >18 years old. Patients with chromosomal abnormalities, congenital anomalies and/or surgical problems were also excluded from the study. The study was conducted in accordance with the Declaration of Helsinki (as revised in 2013). The study was approved by the Ethics Committee of Anhui Provincial Children’s Hospital, Hefei, China (NO. EYLL-2017-29) and informed consent was taken from all individual participants.

The neutrophil CD64 index was evaluated by flow cytometry (Becton Dickinson, FACS Canto II, USA). Briefly, 100 µL peripheral blood samples were mixed with 20 µL fluorescein isothiocyanate (FITC)-labeled CD64 monoclonal antibody, followed by gentle vortexing and incubation in the dark for 15 min. Then, 1 mL diluted hemolysin solution for flow cytometry was added to the blood samples. The samples were vortexed and incubated for 15 min in the dark, and then they were subjected to flow cytometry on a FACS Canto II platform (Becton Dickinson, USA) to evaluate the mean FITC intensity from neutrophils and lymphocytes; the ratio of the two was calculated as the nCD64 index. During hospitalization, we performed three nCD64 index measurements in the sepsis group. The first was performed within 12 hours after admission as baseline; the second was performed on day 3 after admission, and the third measurement was taken the day before discharge. For the nonsepsis group, the nCD64 index was only measured once within 12 hours after admission.

Participant characteristics were stratified into different groups and presented as the mean [standard deviation (SD)] or median [interquartile range (IR)] for continuous variables and frequency (proportion) for categorical variables. The differences in population characteristics were compared using a t-test, the Wilcoxon-Mann-Whitney test, or the chi-square test.

Receiver operating characteristic (ROC) curves were generated to evaluate the diagnostic value of these biomarkers, and Youden’s index was calculated to determine the optimal cutoff values of the biomarkers, together with the area under the ROC curve (AUC, with 95% CI), sensitivity, specificity, positive and negative likelihood ratios and predictive values. Generalized linear models with a logit link were used to evaluate the predictive value of the baseline nCD64 index and its change from admission for in-hospital death rates with crude or full models adjusted for age, sex, sepsis group, pediatric critical illness score (PCIS) and other biomarkers.

A two-tailed P value <0.05 was considered to be statistically significant in all analyses. All statistical analyses were performed using R software (http://www.R-project.org). 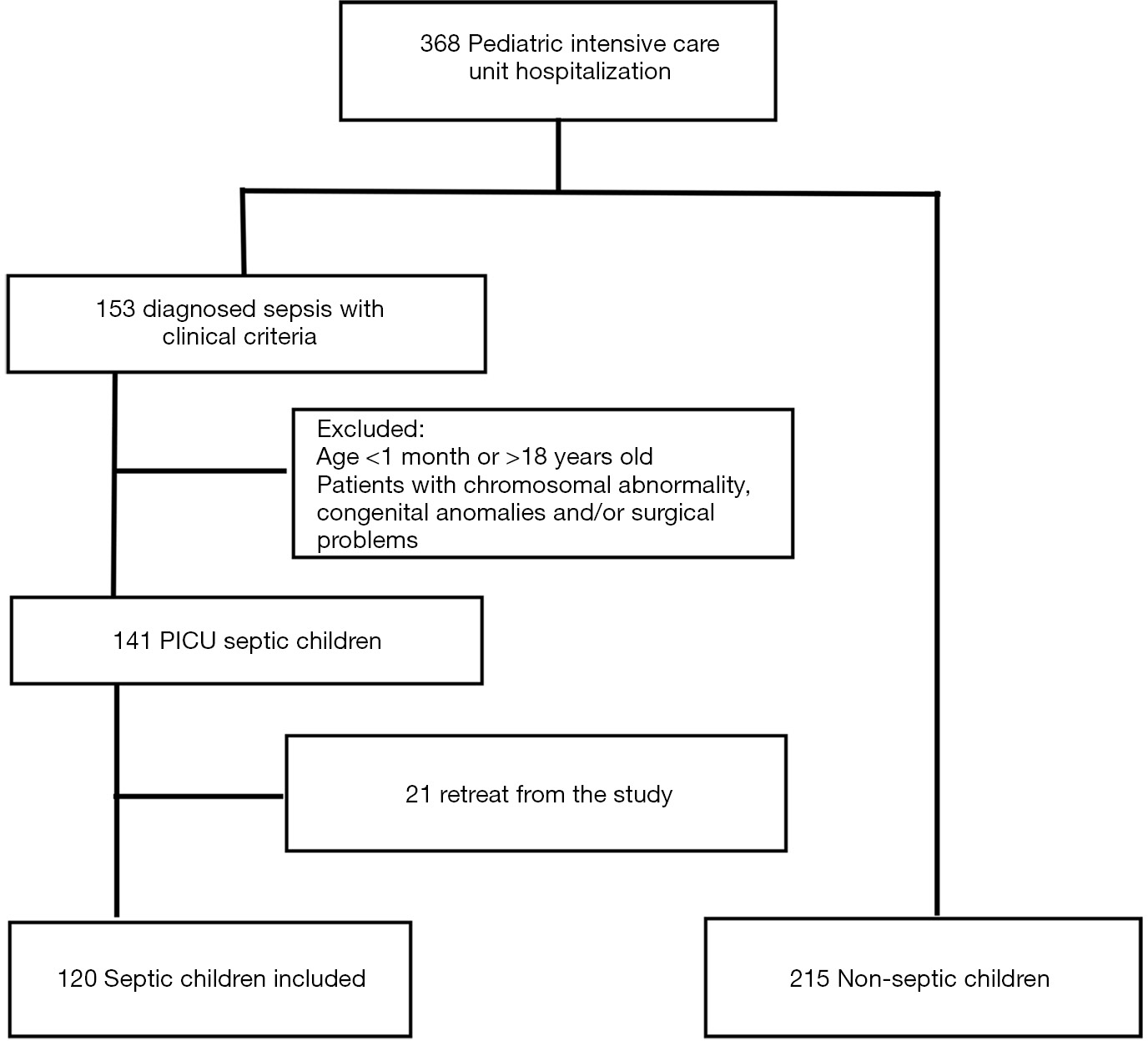 Figure 1 Diagram of participants included in the study.

Clinical performance of biomarkers in the diagnosis of sepsis 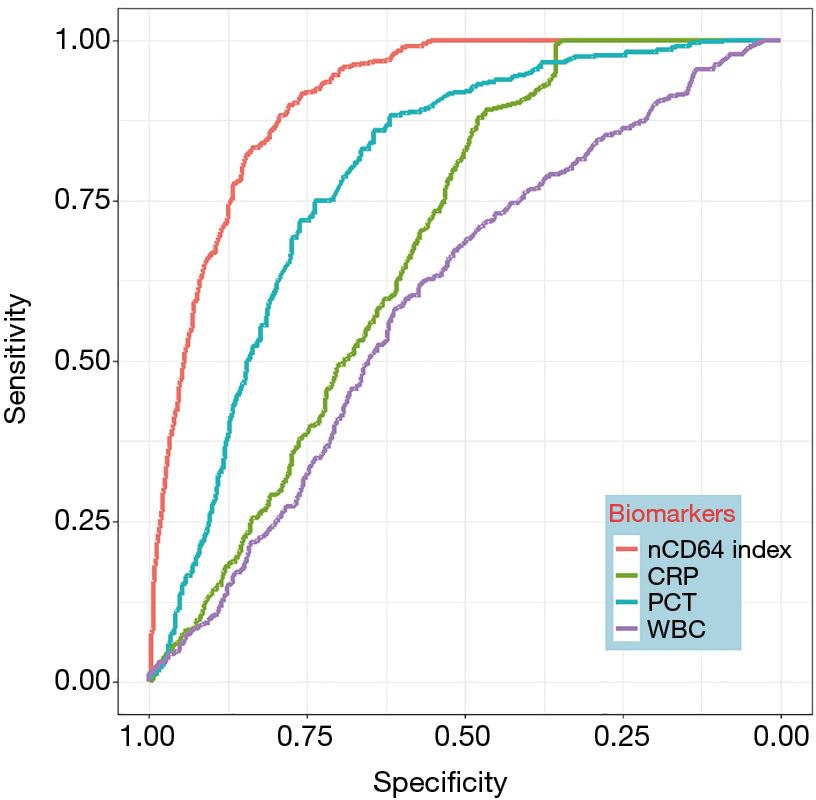 The nCD64 index presented a sensitivity of 0.90 and a specificity of 0.78 with a cutoff value of 5.78. The positive and negative likelihood ratios were 4.08 and 0.13, respectively, and the positive and negative predictive values were 70% and 93%, respectively. We observed that the other three biomarkers did not perform better than the nCD64 index (Table 2).

The performance of continuous CD64 index determination for death

In the present study, significant differences were observed between the baseline nCD64 index and those assessed afterwards in the sepsis group (P<0.05). Moreover, a gradual decline in the nCD64 index was observed during treatment (Figure 3). 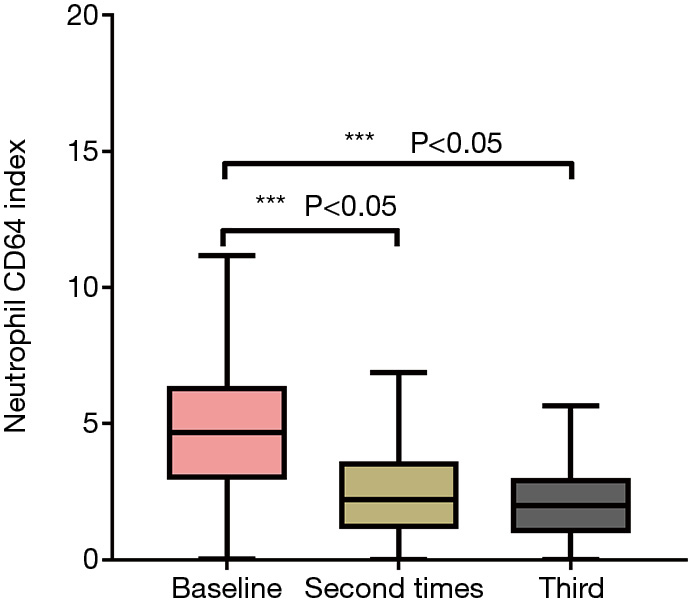 To evaluate the association between the decrease in CD64 index during hospitalization and outcomes, we defined dCD64 as the baseline nCD64 index minus the third nCD64 index measurement. In the crude model, the increase in dCD64 was significantly associated with increased in-hospital death (OR: 1.31, 95% CI: 1.07–1.58). However, after adjustments for the baseline CD64 index and other confounders, the associations reversed (OR: 0.89, 95% CI: 0.63–1.35), even though the P value was not significant (Table 4).

To our knowledge, this is the first prospective analysis in children to evaluate the early diagnostic value of nCD64 in sepsis and to examine the predictive value of continuous nCD64 index measurement for in-hospital death. We found that nCD64 had a better diagnostic value for sepsis than PCT, CRP and WBC count. We also determined that the baseline nCD64 index was associated with higher in-hospital mortality. Moreover, the more rapid the decline in the nCD64 index during treatment was, the lower the risk of in-hospital death.

Thiriet et al. (11) reported a repeated measurement of the nCD64 index in adults and correctly classified 85% of sepsis cases on day 2 versus 74% on day 1, which showed that repeated measurements may help improve the accuracy of sepsis diagnosis. In the present study, continuous measurement of the nCD64 index was performed over the course of disease, and a gradual decline in the nCD64 index was observed throughout treatment, which indicated that the nCD64 index can be used as a potential indicator for evaluating treatment effectiveness and progression. The result was consistent with the result in adults (19). We also determined the low diagnostic value of the second and third nCD64 indices with sensitivities of 77% and 54%, respectively, which may be explained by the timely use of antibiotics.

In the present study, although the potential value of early discrimination and prediction of death for sepsis of nCD64 index were observed, its application in some primary hospital may be limited due to the use of flow cytometer is required. There were two alternatives for this situation. Firstly, the correlation between the nCD64 index and other markers (WBC, PCT and CRP) were calculated to evaluate its possibility to be able to instead of nCD64. In this study, although these biomarkers were inferior to nCD64 index in early diagnosing sepsis and predicting hospital death, its potential value were observed; we also calculated the correlation coefficient between these indicators and nCD64 index and found these markers were positively correlated with nCD64 index (WBC: 0.31; PCT: 0.32; CRP: 0.28) and could be used as a substitute for nCD64 index. Secondly, with the development of microfluidic affinity cells separation system, the simple and multi-parameter combined microfluidic chip for early diagnosis of sepsis were exploited, including culture-negative sepsis and culture-positive sepsis, and excellent diagnosis performance were observed (and AUC value of single CD64 index was 0.90 and the combination of CD64 and CD69 for sepsis diagnosis had the AUC of 0.98) (21-23).

Several potential concerns or limitations are worth mentioning. First, the diagnosis of sepsis was based on clinical criteria rather than blood culture tests in this study. In fact, some studies have demonstrated the difference in the nCD64 index between culture-positive sepsis patients and clinical sepsis patients with negative cultures, and no significant difference was observed (24,25). Second, our current study defined in-hospital death as the study outcome and did not conduct further follow-up after discharge; thus, it is possibly unable to demonstrate the long-term effect of sepsis. Third, we calculated the PCIS score rather than the acute physiology and chronic health evaluation (APACHE) score and Sepsis-related Organ Failure Assessment (SOFA) score in the current study, as the PCIS score is generally acknowledged as an excellent tool in China for judging the severity of childhood diseases and predicting the risk of death. Finally, our study was conducted in Chinese children. Whether the results can be extrapolated to other populations requires further verification. Due to these limitations, further confirmation is greatly needed.

We express our deep gratitude to the patients and the families for their willingness and cooperation in the study.

Funding: This work was supported by the Key Research and Development Program Projects in Anhui, China (ID: 1704a0802172).

Reporting Checklist: The authors have completed the STROBE reporting checklist. Available at http://dx.doi.org/10.21037/tp-21-63

Conflicts of Interest: All authors have completed the ICMJE uniform disclosure form (available at http://dx.doi.org/10.21037/tp-21-63). The authors have no conflicts of interest to declare.

Ethical Statement: The authors are accountable for all aspects of the work in ensuring that questions related to the accuracy or integrity of any part of the work are appropriately investigated and resolved. The study was conducted in accordance with the Declaration of Helsinki (as revised in 2013). The study was approved by the Ethics Committee of Anhui Provincial Children’s Hospital, Hefei, China (NO. EYLL-2017-29) and informed consent was taken from all individual participants.