Developmental dysplasia of the hip (DDH) is manifested by developmental dysplasia of the acetabulum and developmental malformation of the lower limbs in children with dislocated hip joints (1-3). The study has indicated that the Formation of DDH is related with environmental and genetic factors which could directly affect the developments of the connective tissue, osteogenesis, and chondrogenesis (4). Although the incidence of DDH is not currently very high, it has a serious impact on the daily activities and psychological development of children (5,6). Therefore, it is of positive significance to adopt effective treatment for DDH. Proximal femoral varus osteotomy, as one of the most effective methods for the treatment of DDH, has been the subject of clinical testing for decades and has been supported by many clinical researchers (7-9). However, its effect is often related to a variety of factors, including age, development of the acetabulum, and dislocation of the hip joint. Before operation, physicians often measure patients’ neck shaft angle to obtain accurate parameters, thus improving the operation efficiency (10,11). In addition, femur length after osteotomy is one of the important indicators that should be clarified intraoperatively, as its accuracy is the main factor affecting the operation effect (12,13). Based on this, this study aimed to analyze the changes of neck shaft angle, acetabular index, C value, and Δ S during proximal femoral varus osteotomy, and evaluate them in combination with Severin and McKay scores after operation, with the purpose of providing references for the obvious therapeutic effect of proximal femoral varus osteotomy on DDH. We present the following article in accordance with the STROBE reporting checklist (available at http://dx.doi.org/10.21037/tp-21-200).

All procedures performed in this study involving human participants were in accordance with the Declaration of Helsinki (as revised in 2013) (14). This study was approved by the Linyi Central Hospital Ethics Committee (20180312). A total of 60 children with DDH admitted to our hospital from May 2018 to May 2020 were selected as the study participants and their general information is shown in Table 1. 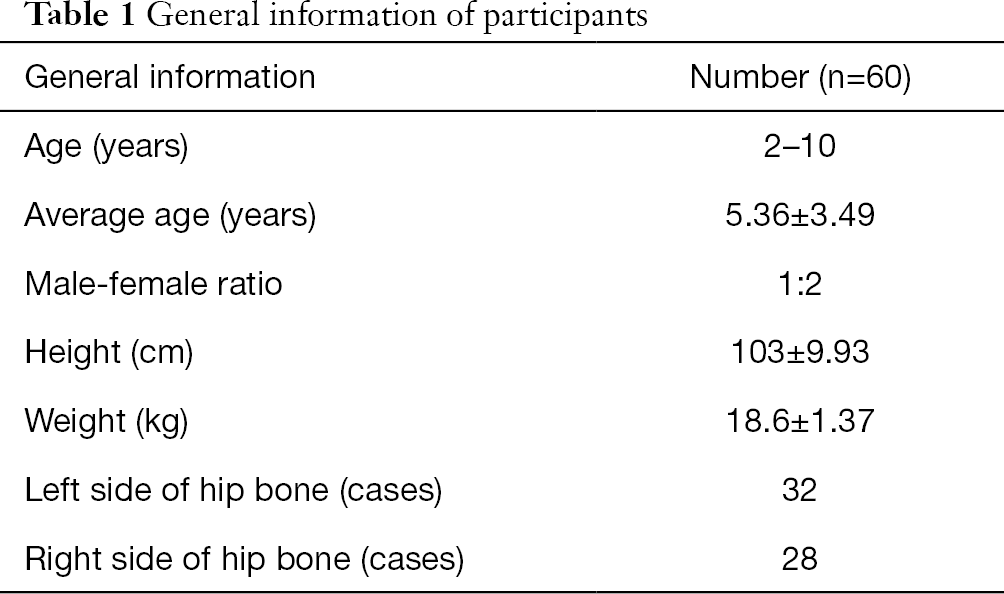 The exclusion criteria were as follows: (I) hip dislocation in children that was caused by trauma or pathological reasons; (II) the guardians of the children refused the postoperative follow-up.

All participants’ hips were photographed and reconstructed by three-dimensional computed tomography (3D-CT) with X-ray before operation, and the neck shaft angle and acetabular index were recorded. Then, the operative implementation plan was formulated according to these parameters.

All participants were treated with proximal femoral varus osteotomy, and appropriate anesthetics were injected according to their individual conditions. During the operation, the participants took supine positions, and their affected side was increased by 30°. During the operation, the skin, subcutaneous tissues, and deep fascia on the affected side of were incised, and rectus femoris was exposed by separating the sartorius muscles and tensor fasciae latae. Then, the epiphysis of the hip was incised, lateral epiphysis and periosteum were stripped, and the gluteus medius and gluteus minimus were stripped after hemostasis. The lateral circumflex femoral artery was separated, ligated, and cut. Next, the fat was pushed away to fully expose the articular capsule which was then cut in a T-shape, the insertion point of the round ligament was cut off, and the femur was externally rotated to expose the acetabulum. The hyperplastic tissues were then removed, and the acetabular labrum was incised. The iliopsoas was isolated, cut off from the outer edge, and clamped and marked by Kocher’s forceps. The flap was cut backwards along the middle of the incision, and the fascia lata was cut longitudinally at the greater trochanter to expose the patients’ upper femur. Subsequently, the periosteum was separated, and an appropriately sized steel plate was selected for pre-bending in advance. At the same time, the proximal femur was fixed with 2 screws, 2 Kirschner wires were vertically implanted into the proximal and distal ends of the osteotomy, and the anteversion angle of the participant was measured. The femur was amputated and rotated so that its anteversion angle ranged from 10° to 25°, with the angle at osteotomy greater than 120° but slightly less than normal value. The shortened lengths of the femoral osteotomy were consistent with the prolapse height of the femoral head. When resetting the osteotomy end, the proximal and distal screws were tightened in turn and the soft tissues were cleaned at the upper edge of the acetabulum. Taking the center of Y-shaped cartilage as the axis, the external iliac plate was severed at 15 mm from the upper edge of the acetabulum, the distal end of the osteotomy was turned forward, outward, and downward, and the gap was filled with bone blocks. Flexion, internal and external rotation of children’s affected limb were carried out, and appropriate stretching of the distal limb was also performed to form a gap of about 1 cm between the femur and acetabulum. The absence of dislocation of the femur represented the completion of reduction. Then, the joint capsule was sutured, maintaining the hip joints in flexion and abduction of 30° and internal rotation of 20–30°. Finally, the epiphysis and various layers of tissues were sutured and bandaged, and plaster was used for external fixation of the affected side. After operation, X-rays were taken of the affected side.

In this study, the participants undergoing proximal femoral varus osteotomy were followed up 1 year after surgery, and the parameters such as neck shaft angle and acetabular index were statistically analyzed and compared with their preoperative parameters to evaluate the therapeutic effect of the operation.

The Severin criteria were assessed according to acetabular morphology, and the effect of surgical intervention was divided into grade I, II, III, and IV. The number of participants in each grade was recorded.

The McKay criteria were assessed according to participants’ movements, walking patterns, and pains. The effect of surgical intervention was divided into grade I, II, III, and IV, and the number of participants in each grade was recorded.

The actual shortened lengths of the femur were measured after operation. The software Digimizer V4.6.1 (https://www.digimizer.com, MedCalc Software, Ostend, Belgium) was adopted to measure the postoperative and preoperative hip X-rays. We set P1' as the intersection point between the midline of the femoral neck and the midpoint of the growth plate of the proximal femur. The line from P1' to the innermost point of the osteotomy line, P2', was c. The line of P1' intersected vertically with the osteotomy line at point N and the distance between the 2 points was S2. The preoperative X-ray was introduced, and the intersection point P2 of the same line length as c was made from the measurement site P1 of the femoral head to the inner cortex of the femur as the osteotomy position, and its perpendicular line with the midline of the femoral shaft was taken as the osteotomy line. The osteotomy line and P1 intersected vertically at point M, and the distance between the 2 points before operation could be measured as S1, thus: Δ S=S1−S2. 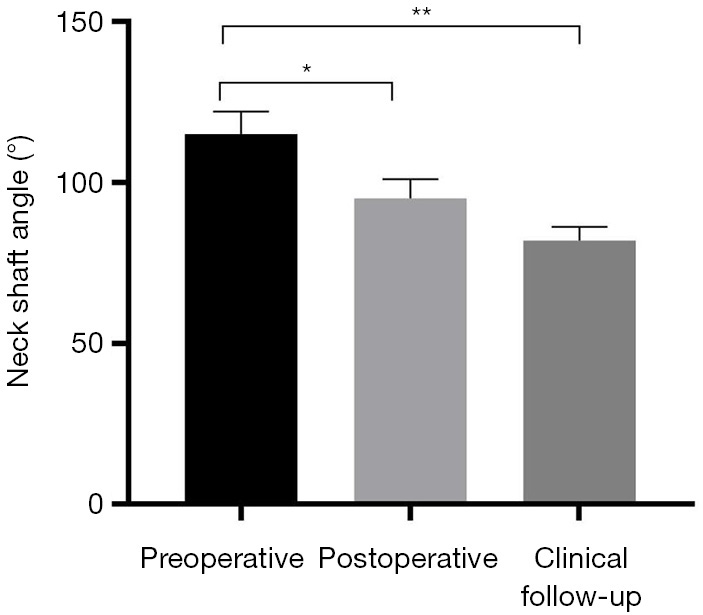 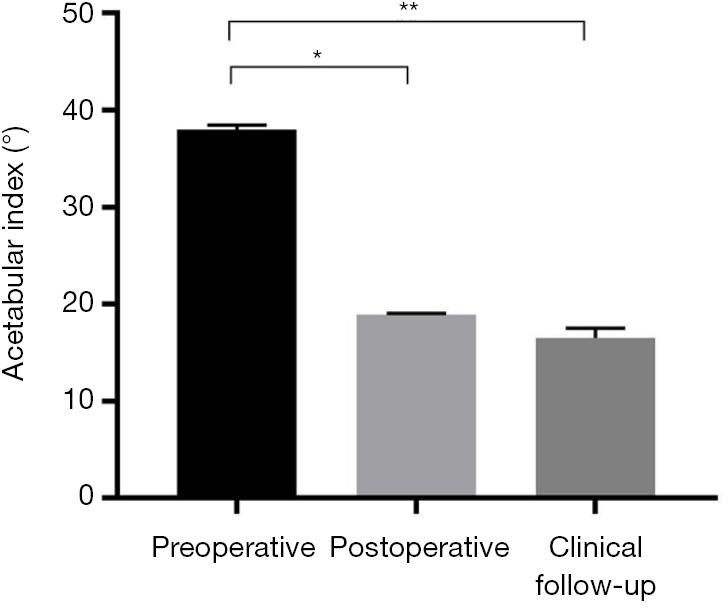 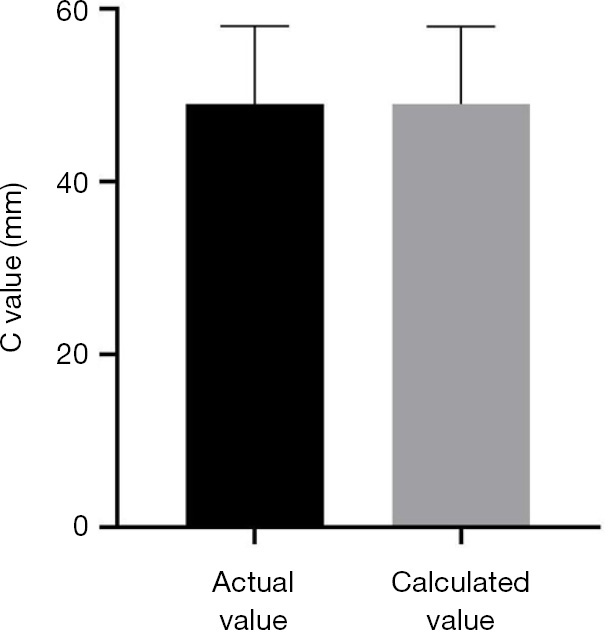 Comparison of actual and calculated shortened lengths of the proximal femur 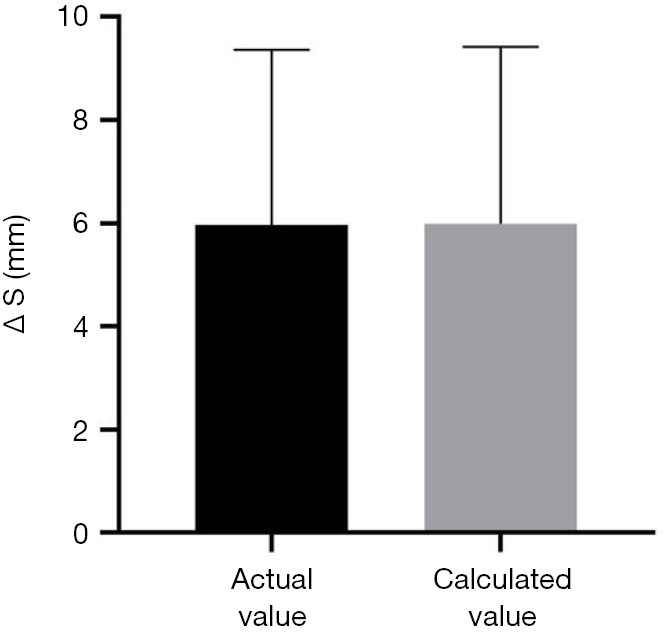 The condition DDH is one of the main causes of developmental malformation of lower limbs in children, and effective clinical intervention is of great significance for promoting healthy development (15,16).

Proximal femoral varus osteotomy is an effective method for treating DDH, but children often experience complications such as increased distance between the femoral head and the inner wall of the acetabulum, dislocation of the femoral head, ischemic necrosis, and so on (17). In children with DDH, chronic compression of the hip bones causes deformation and heterotopia of the femoral head, which leads to a significant enlargement of the femoral neck shaft angle. In children with severe DDH, the neck shaft angle can be increased to more than 150° (18,19). For children with significantly increased neck shaft angles, proximal femoral varus osteotomy is usually adopted to correct it clinically, to induce concentric reduction of the hip joints and improve the combined state of the acetabulum and femoral head, thus reducing the risk of femoral head dislocation (20,21). In this study, after the participants had undergone corrective surgery, the femoral neck shaft angle and acetabular index decreased to some extent, and children with McKay and Severin grades I and II displayed significantly improved rates of 91.67% and 93.33%, respectively, indicating that proximal varus osteotomy could effectively improve the femoral neck shaft angle and acetabular index, and significantly reduce the limitation of hip joints in children. To an extent, the femoral neck shaft angle and acetabular index can reflect the actual condition of DDH in children. Sonoda et al. (22) found that the neck shaft angle and anteversion angle of the hip joints in children could directly determine the postoperative joint shape, thus providing an effective reference for preoperative planning. In addition, after the proximal femoral varus osteotomy, the femurs of children will be truncated to some extent. Compared with younger ones, older children have a weaker ability of body regulation, and osteotomy may lead to a shorter femur on the affected side compared to normal side, resulting in lower limb length discrepancy and even uncoordinated movements. Umer et al. have confirmed that the patients younger than 5.6 years old have better clinical outcomes than those of older patients (23). Whether or not to perform femoral osteotomy in children usually depends on the feasibility of femoral head reduction. Studies have revealed that femoral varus can shorten the femur to some extent, and concentric circle reduction can be achieved only by femoral varus if the required truncation length is short (24). Therefore, accurate calculation of the length change caused by femoral varus and the actual truncation distance before operation can effectively evaluate the necessity of osteotomy, thereby reducing the risk of operation to children to some degree. Besides, an osteotomy that is too large will also increase the tension of the joint soft tissues in children, thus increasing the risk of postoperative dislocation (25). In this study, there were no significant differences in the measured and calculated distances between the central point of the femoral head and the medial point of the proximal end of the osteotomy, and there were no significant differences between the 2 in the measurement of the shortened lengths of the proximal femur, suggesting that accurate assessment of femoral length had important clinical value. Gaffney et al. (26) found that femoral length was significantly correlated with the severity of DDH, which had prompted them to construct a statistical model as a preoperative reference.

The study investigated the effect of acetabular morphological parameters applied in proximal femoral varus osteotomy on the treatment of the children with DDH. However, the study lacks the data of the operative effects on some factors, such as complications and age of children, and more observations on operative outcome are limited small cases and long-term follow-up.

In conclusion, this study demonstrated that acetabular morphological parameters applied in proximal femoral varus osteotomy has high application value in the treatment of DDH in children.

Reporting Checklist: The authors have completed the STROBE reporting checklist. Available at http://dx.doi.org/10.21037/tp-21-200

Conflicts of Interest: All authors have completed the ICMJE uniform disclosure form (available at http://dx.doi.org/10.21037/tp-21-200). The authors have no conflicts of interest to declare.

Ethical Statement: The authors are accountable for all aspects of the work in ensuring that questions related to the accuracy or integrity of any part of the work are appropriately investigated and resolved. All procedures performed in this study involving human participants were in accordance with the Declaration of Helsinki (as revised in 2013). This study was approved by the Linyi Central Hospital Ethics Committee (20180312). All participants provided written informed consent.