Multiple congenital granular cell tumours of the maxilla and mandible: a rare case report and review of the literature

Congenital granular cell tumour (CGCT), also referred to as congenital granular cell epulis, was first described by Newman in 1871 (1). As a rare and benign lesion, CGCT grows on the alveolar ridge of newborns. Usually, it occurs more likely on the maxilla than on the mandible, with a ratio of 3:1, and a female-to-male ratio of 9-10:1 (2). Until now, there have been more than 200 cases reported in the literatures, and 10% of the cases are multiple. Compared with single lesion, multiple lesions have similar manifestations, including tan-pink polypoid masses with smooth surfaces and greater possibility of causing feeding and breathing difficulties (3). To date, a standard treatment protocol has not been established, while surgical excision or conservative treatment is usually feasible. In this article, we report a female newborn with multiple lesions on both the mandibular and maxillary alveolar ridges. We selectively removed the mandibular mass that obstructed breast feeding and conserved the maxillary mass with no symptoms to observe its prognosis. To our knowledge, this is the first case to treat multiple CGCTs with different approaches. Finally, we reviewed the current literatures to elaborate further the characteristics of CGCT from the perspectives of the clinic and pathology, to explore the importance of immunohistology, to discuss the histogenesis and aetiology, and to understand various treatments of CGCT. We present the following case in accordance with the CARE reporting checklist (available at http://dx.doi.org/10.21037/tp-21-32).

A two-day-old female neonate with an exophytic lesion on the mandibular alveolar ridge and symptoms of feeding difficulties was noticed by her parents. Without any medical therapy, she was referred to the outpatient department of our hospital. The healthy infant was delivered at 39-week gestation by cesarean section. Her family history of congenital disorders and the medical histories of the parents were negative. After detailed physical examination, except for the lesion on the mandibular alveolar ridge, another similar lesion was found on the right maxillary alveolar ridge (Figure 1A,B). The mandibular mass was 3 cm in diameter, which was firm, nonpulsatile, pedunculated with a blood scab on its surface, protruding from her mouth and arising from the mucosa of the incisor region (Figure 1A).Although breastfeeding was difficult, respiration and swallowing were normal. The maxillary mass was covert and approximately 0.5 cm in diameter without any associated functional disorders (Figure 1B). Therefore, CGCT was preliminarily diagnosed. 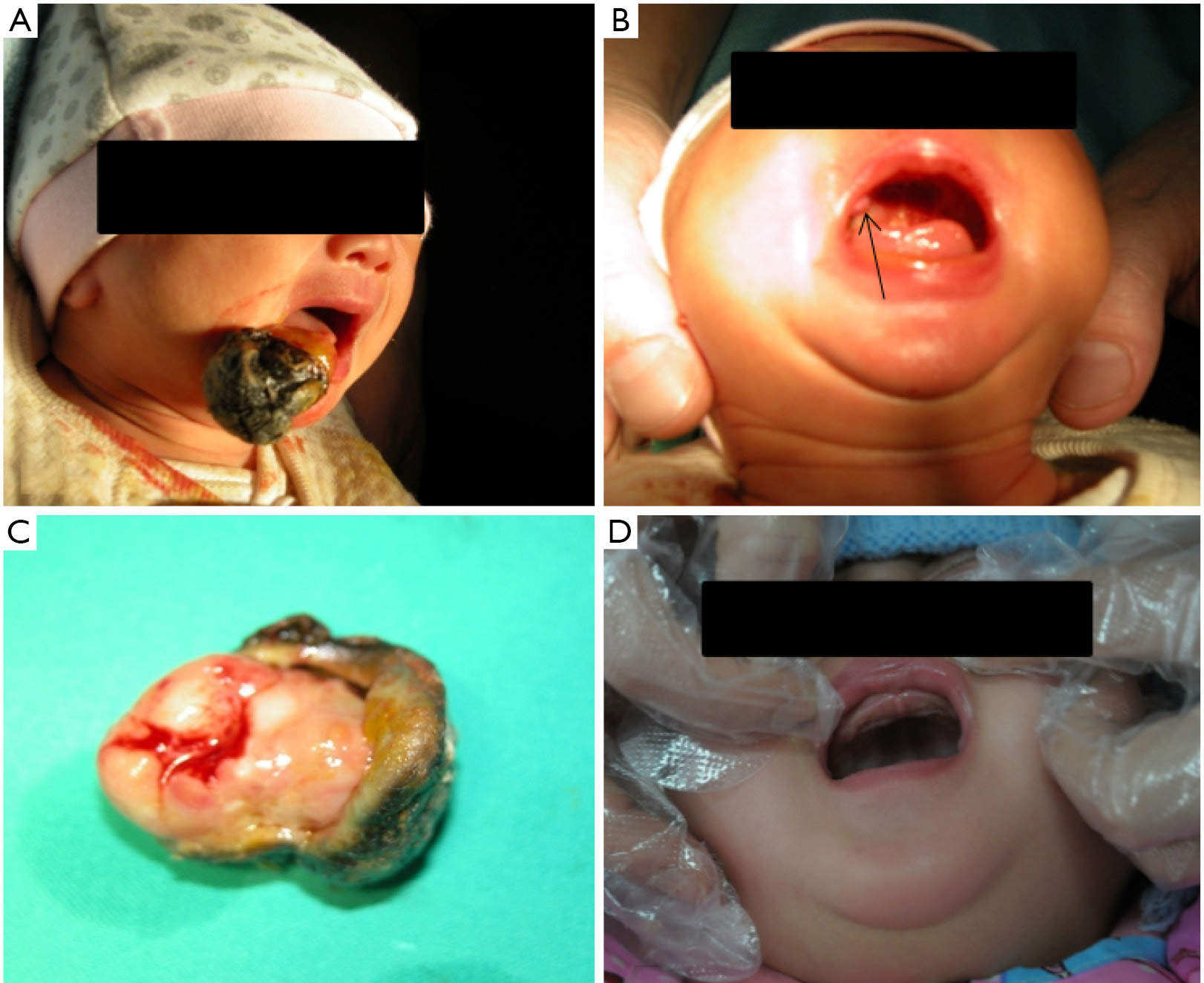 Figure 1 The clinical manifestation and therapeutic strategies of the reported case. (A) The mass on the mandible protruded out of the newborn’s mouth with a blood scab on the surface. (B) The black arrow points to the mass on the maxillary alveolar ridge after resection of the mandibular lesion. (C) The mandibular lesion was excised under general anaesthesia. (D) At the 6-month follow-up, the superior mass spontaneously regressed.

Considering differences in size and manifestation, the mandibular mass was planned for excision while that in the maxilla was left to be monitored. Under general anaesthesia, the mandibular lesion was removed (Figure 1C). After the operation, the infant was able to breast feed and was discharged from the hospital 3 days later. After a 6-month follow-up, there was no evidence of recurrence, and the maxillary mass underwent spontaneous regression (Figure 1D). In addition, the central incisor of the left mandible erupted (Figure 2A). 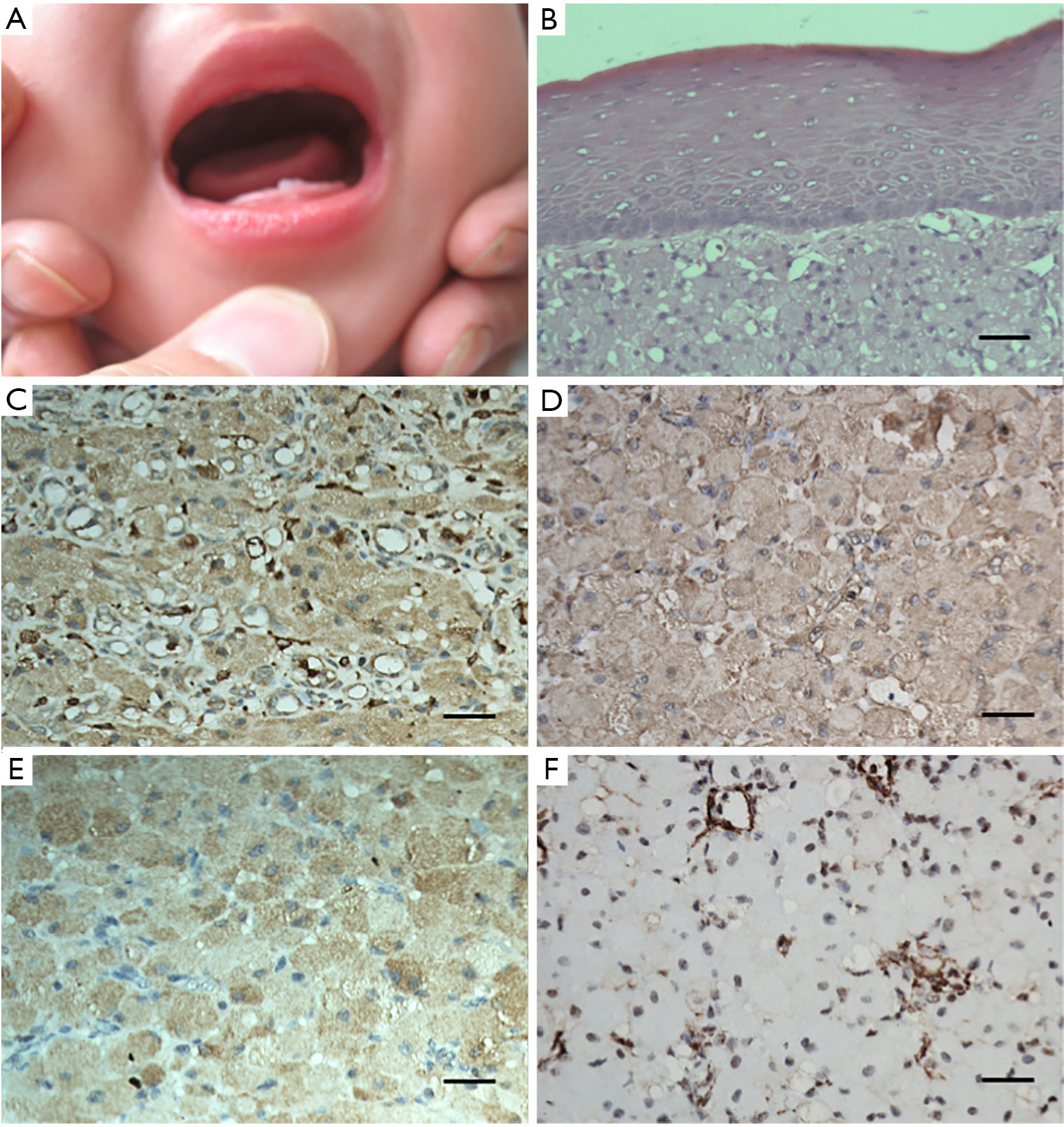 Microscopic examination of the haematoxylin and eosin (H&E) sections revealed that the lesion had an atrophic parakeratinized stratified squamous epithelium. Rounded and polygonal cells with abundant granular eosinophilic cytoplasm and round or oval nuclei were observed in the lamina propria. Cellular atypia or mitotic activity was not found. Delicate connective tissue septa with small vessels were scattered throughout the granular cell lesion (Figure 2B).Otherwise, immunohistochemistry staining indicated negativeS-100. The results of immunohistochemistry analysis were graded as negative (–) or positive (+) and are summarized in Table 1. Finally, a definitive diagnosis of CGCT was established. 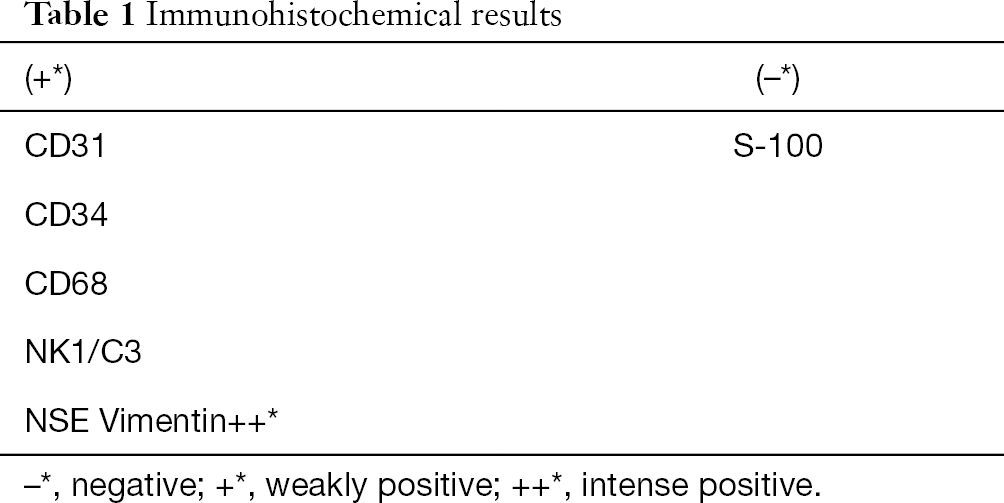 All procedures performed in studies involving human participants were in accordance with the ethical standards of the institutional and/or national research committee(s) and with the Declaration of Helsinki (as revised in 2013). Written informed consent was obtained from the guardian of the patient.

Discussion and review of the literature

To our knowledge, we report the first case of treating multiple CGCTs with different approaches. In this case, considering differences between the two lesions, the mandibular mass was planned for excision while that in the maxilla was left to be monitored for its prognosis. For this neonate, the treatment scheme addressed the problem of breastfeeding, reduced surgery injury, satisfied the request of the parents and decreased the cost and time of the operation. As usual, multiple CGCTs have similar manifestations as the single CGCT, but there is still controversy on the histogenesis and treatment. Below we discuss the characteristics of CGCT, explore the histogenesis and aetiology, and provide new ideas for the treatment of multiple CGCTs.

Clinical and pathological characters of CGCT

Hitherto clinical and pathological manifestations of CGCT have been easily detected. Clinically, CGCT occurs in neonates or newborns and has a high incidence in the Caucasian population (3,4). The female to male ratio is approximately 9-10:1. The predilection site is the alveolar ridge, on which the maxilla occurs more frequently than the mandible at a ratio of 3:1 (5). However, Çerman et al. recently reported a rare case in the arm (6). The size ranges from several millimeters to a few centimeters (5). CGCT usually presents as a solitary, sessile or pedunculated, red or pink nodule (7), but in this case, a mass covered a layer black scab derived from the haemorrhage of the broken mass, which may confuse the diagnosis. Approximately 10% of cases reported multiple CGCTs (2,5), which can impede breastfeeding and breathing more possibly. To data, no literature has reported the malignant transformation or cancerization of CGCT (4). In addition, spontaneous regression also exists in CGCT (8). Pathologically, CGCT characterizes a whitish-yellow and smooth section (9). Under a microscope, it consists of large round granular cells with eosinophilic cytoplasm and basophilic nuclei, without cellular or nuclear pleomorphism (5). Based on the 3rd and 4th Editions of the World Health Organization Classification of Head and Neck Tumours, CGCT contains eosinophilic cells with granules in the cytoplasm (10). In addition, abundant vascularization or vascularity is another characteristic of CGCT, indicating that the black scab on the surface of this mass originated from blood (5).

Hypothesis of histogenesis and aetiology

Although many immunohistochemical outcomes have been demonstrated (10-14), the exact histogenesis of CGCT is still unclear. The possible cellular origins include epithelial, undifferentiated mesenchymal cells, pericytes, fibroblasts, smooth muscle cells, and nerve-related cells (13). In this case, we used 7 markers to confirm the histogenesis origin of CGCT (Table 1). The negative expression of S-100 suggested that CGCT had a different mesenchymal origin than granular cell tumours and was absent of Schwann cells (11). The positivity of CD68 was similar to most reported cases (Figure 2C) (5,11,15), while some authors have reported contradictory negativity (13,16). Positive staining for vimentin, which was distributed specifically in the cytoplasm, was observed (Figure 2D). The positivity of NSE staining suggested a potential neural origin (Figure 2E) (12). The staining of NK1/C3, a neuroectodermal and lysosomal marker that indicates cells of neural crest origin, was positive (Figure 2F). The integrated immunohistochemical findings suggested that CGCT seemed to be derived from the neural crest but showed not significant neural differentiation (14,17). We considered that CGCT was a kind of malformation of embryonal hamartoma. We drew conclusions based on the presence of odontogenic epithelium in the tumour in some literature (18,19). In addition, histological evidence of degenerative changes, such as spontaneous regression and no recurrence after incomplete removal, further supported the idea that CGCT is a degenerated hamartoma rather than neoplasm. Thus, we hypothesize that CGCT associates with the neural crest that differentiates into the gingival epithelium. Since the migration and differentiation of neural crest cells mainly rely on signaling molecules and gene regulation, histogenesis and genetic and molecular research of CGCT are still worthy of further study.

The hypotheses about the aetiology of CGCT are still controversial. Given that the sex-specific predominance is significantly high, some scholars proposed that the development of CGCT may be closely linked to hormones (2,16,20). The experimental outcome of injecting oestrogen in the uterine cervix of newborn mice seemed to support this hypothesis (21). However, neither oestrogen nor progesterone hormonal receptors were detected in the CGCT (4,21,22).

CGCT needs to be distinguished from adult granular cell tumours according to the clinical and pathological features (20). These points are summarized in Table 2.Furthermore, non-classic features, such as fibrosis and spindle cell proliferation, should be noted to make a differential diagnosis with fibrosing pyogenic granuloma, infantile myofibromatosis, rhabdomyoma, rhabdomyomatous choristoma, and juvenile xanthogranuloma (16). Interestingly, it has been reported that ultrasound examination can also be utilized for prenatal diagnosis. CGCT increases in size during late gestation and usually can be detected at 31weeks of gestation or later (23). The differential diagnosis via prenatal ultrasound included epignathus and haemangioma (24,25). Haemangioma may be solid or cystic, and the pulsations may be observed in the vascular spaces by using real-time ultrasound (24). Epignathus shows mixed components, including solid and cystic characteristics accompanied with polyhydramnios (25). Otherwise, computed tomography (CT) or magnetic resonance imaging (MRI) can be applied to prenatal diagnosis. In contrast with sonography, MRI can provide anatomic details (25,26).

The treatment and new ideas about CGCT

Although it is controversial, surgical excision after delivery is more favourable. CGCT has no complications or other systematic diseases, except in a case with tetralogy of Fallot (27). This finding reminds us that comprehensive considerations should be taken, and thorough examinations should be carried out when making therapeutic decisions regarding surgery. Moreover, conservative treatment with close follow-up is also an available choice (8). Recently, scholars took advantage of new techniques, including the carbon dioxide (CO2) laser (20). For multiple CGCTs, simple surgery has been adopted (3,7). One case adopted two treatments on one mass: first, waiting for CGCT regress to a certain size and conducting the subsequent excision (8). This approach may be considered inefficient and a waste of time and cost or overtreatment by the present understanding and level of medical knowledge. In the current case, we implemented two treatments on two masses, which reduced time and cost and diminished the excessive damage to the soft tissue. Thus, it is meaningful to report a novel method to treat multiple CGCTs.

According to the reviewed literature and the actual situation of the reported case, we draw a new idea as follows:

It is extremely rare for multiple CGCTs to occur, which present in only 10% of cases. The case of multiple CGCTs using different therapeutic strategies was reported here because of its rarity and the innovation of its resolution. Satisfactory results were achieved for this parent. Accurate diagnosis is important to achieve appropriate treatment and prognosis. However, there is still controversy regarding histogenesis and treatment. Thus, we hypothesized that CGCT is a degenerated hamartoma based on immunohistochemistry and proposed a new idea for treatment based on review of literature.

Reporting Checklist: The authors have completed the CARE reporting checklist. Available at http://dx.doi.org/10.21037/tp-21-32

Conflicts of Interest: All authors have completed the ICMJE uniform disclosure form (available at http://dx.doi.org/10.21037/tp-21-32). The authors have no conflicts of interest to declare.

Ethical Statement: The authors are accountable for all aspects of the work in ensuring that questions related to the accuracy or integrity of any part of the work are appropriately investigated and resolved. All procedures performed in studies involving human participants were in accordance with the ethical standards of the institutional and/or national research committee (s) and with the Declaration of Helsinki (as revised in 2013). Written informed consent was obtained from the guardian of the patient.