Etiological distribution of pertussis-like syndrome in 756 children in Chengdu

All procedures performed in this study involving human participants were in accordance with the Declaration of Helsinki (as revised in 2013). The Institutional Review Committee approved the retrospective analysis without providing written ethical approval, because it was an objective report complying to the condition of protecting the privacy of the patients. Individual consent for this retrospective analysis was waived.

A retrospective analysis was performed of 756 children with confirmed pertussis-like syndrome hospitalized at the Department of Pediatric Respiratory Medicine of Chengdu Women’s and Children’s Central Hospital, from January 2015 to August 2019 (Figure 1). There were 437 male infants and 319 female infants, with an average age of 1.52±0.84 years. The number of seriously ill patients was 526. Pertussis-like syndrome occurred throughout all seasons of the year, although the majority of cases (n=493) occurred in the winter and spring seasons. 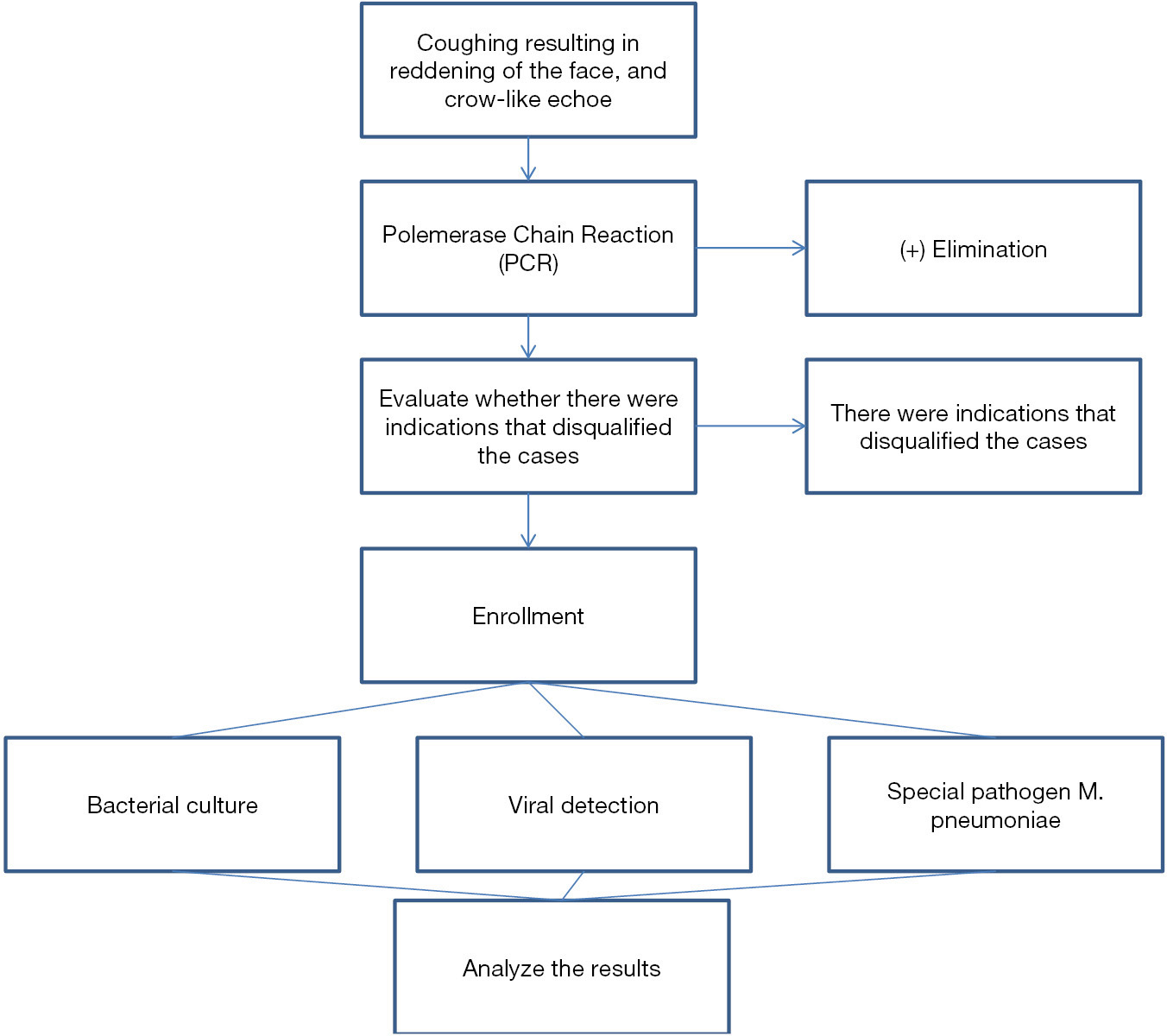 Figure 1 When the children were admitted to the hospital, we first performed PCR testing for the children with Paroxysmal, violent convulsive in reddening of the face, and crow-like echoe according to the clinical symptoms of the children, then excluding pertuss-positive patients, and then assessed for compliance with the inclusion criteria. The enrolled children will undergo relevant etiological examination, and then analyze and summarize the results.

(I) Airway disorders, such as congenital bronchopulmonary dysplasia and bronchiolitis obliterans; (II) recurrent lower respiratory tract infections; (III) autoimmune disorders and congenital immunodeficiency; (IV) being affected by pertussis-like syndrome at the recovery stage of pneumonia (having contracted pneumonia in the past 4 weeks, especially M. pneumoniae pneumonia).

Upon admission, a 0.5–1 mL deep sputum sample was collected from each infant by specialist staff and placed into a disposable, sterilized sputum collector. The samples were subject to bacterial culture. Meanwhile, 2 mL of venous blood was collected into an EDTA-containing tube. The samples were used to detect the following pathogens: respiratory viruses [Q fever rickettsiae, Chlamydia pneumoniae, influenza A virus, influenza B virus, parainfluenza virus (PIV), RSV, and Legionella pneumophila] and antibody titer to M. pneumoniae.

The sputum samples were inoculated to the culture plate and then incubated in a 5% CO2 incubator at 35 °C for 48–72 h. The BD Phoenix™ automated identification and susceptibility testing system (Becton,Dickinson and Company) was used to detect the bacteria in strict accordance with the instruction manual and standard operating procedures.

Detection of antibodies to respiratory viruses

Antibodies to respiratory viruses were detected by an indirect immunofluorescence assay.

An agglutination assay was employed for the serologic test of the IgM antibody titer. An antibody titer above 1:40 indicated a positive result.

All statistical analyses were conducted using SPSS 16.0 software (Produced by IBM). The results were expressed as mean ± SD (measurement data) and percentages (count data). The etiological differences between the groups were analyzed by using the chi-square test. A P value <0.05 was considered statistically significant.

Among the 756 children with pertussis-like syndrome, 439 cases were positive for etiological agents. The detection results are reported below.

Basic features of the population

In 756 cases (Table 1), 437 cases of male, female 319 cases, according to whether or not more than 1 year old, one year of age and below 489 cases, 267 cases aged 1, according to census register, children 279 cities, counties and rural 477 cases, 523 cases related vaccination is complete, not completed on schedule in 216 cases, 17 were unknown, on gestational age, 667 cases of full term, premature birth in 89 cases, 642 cases of normal birth weight and low birth weight in 113 cases of macrosomia in 1 case 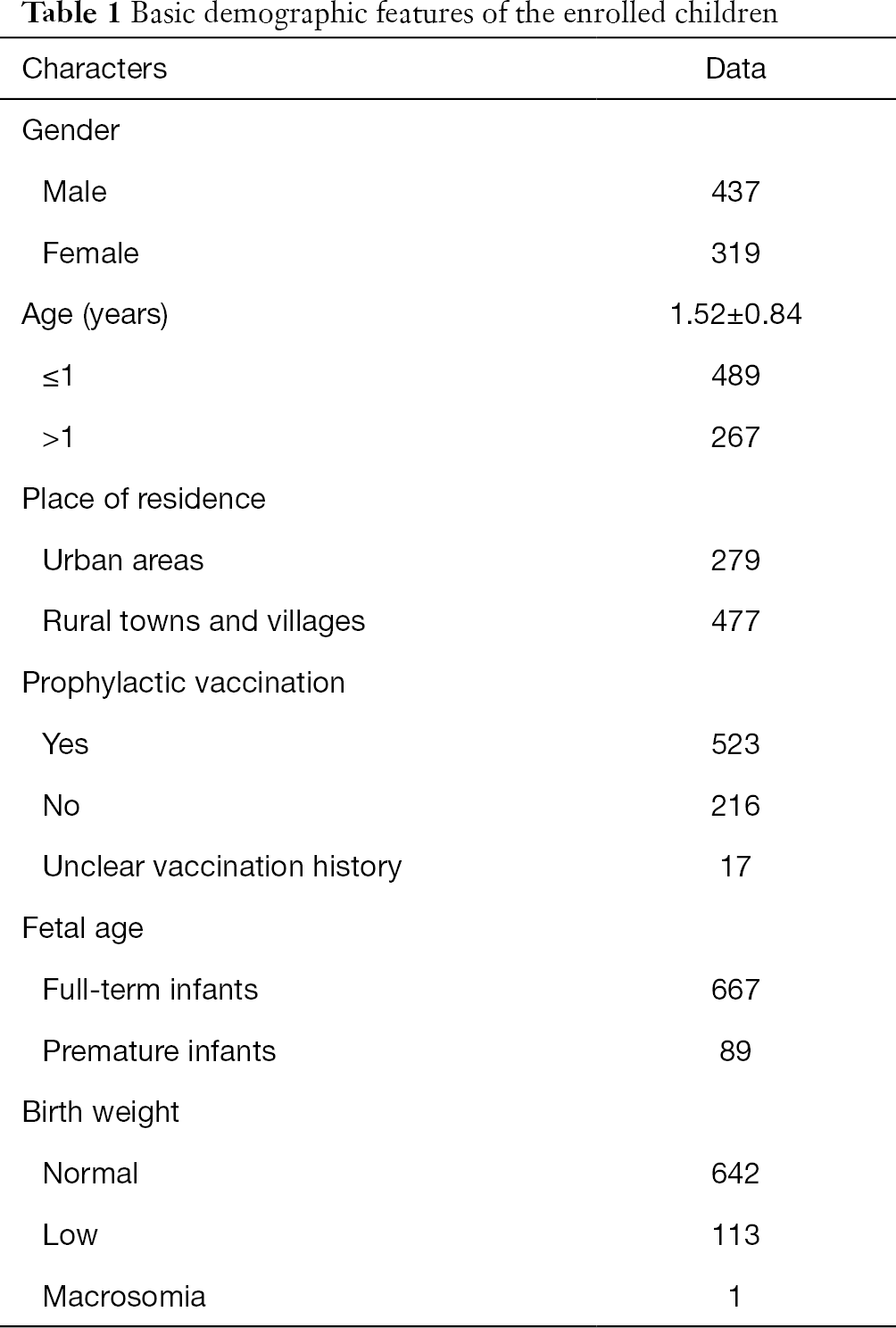 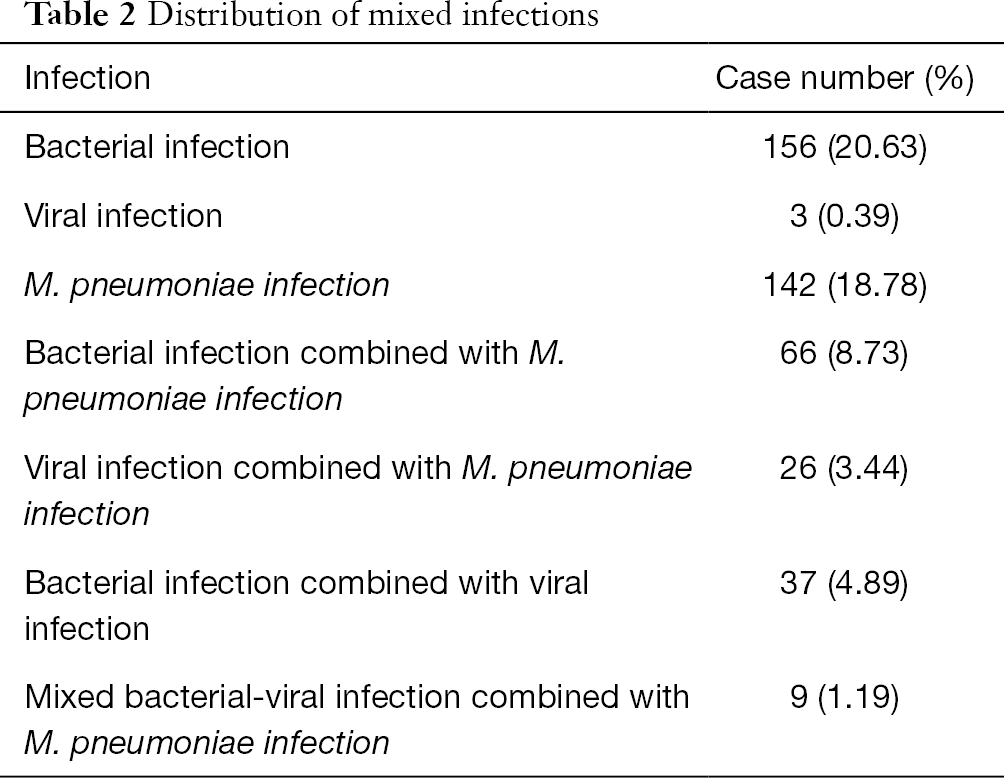 Among the 756 children with pertussis-like syndrome, 243 patients had an antibody titer to M. pneumoniae ≥1:80.

The incidence of pertussis-like syndrome has been dramatically rising in children in recent years. The typical symptoms of pertussis-like syndrome include paroxysmal, violent coughing resulting in reddening of the face, followed by a high-pitched inspiratory ‘whoop’ sound. Small infants may also display cyanosis of the face and lips or experience seizures following excessive coughing. The physiopathologic mechanism of paroxysmal coughing and whooping can be explained as follows: The pathogens entering the body adhere to the ciliated epithelial cells in the mucosa of the trachea, bronchi, and bronchioles, where they proliferate and release toxins. The ciliated columnar epithelial cells degenerate, and the ciliated epithelial cells are paralyzed due to the proliferating pathogens and the toxins released. Protein synthesis in the epithelial cells decreases and the subcellular organelles are damaged. As a result, sticky secretions caused by respiratory tract inflammation cannot be expelled. The retained secretions induce persistent stimuli to the terminal nerves of the respiratory tract, causing paroxysmal coughing via the central nervous system. A clinical study in baboon infants corroborated the above analysis (1). Histopathology of the trachea indicated massive inflammatory cell infiltration and mucus generation. Immunohistochemistry indicated that the bacteria were localized to the surface of the ciliated epithelium of the trachea, damaging the ciliated epithelium. Therefore, respiratory pathogen adhesion to the ciliated epithelium plays a vital role in whooping cough and pertussis-like syndrome. As to whether pertussis-like syndrome can be diagnosed based on clinical manifestations, Miyashita et al. (2) found that the diagnostic sensitivity of paroxysmal coughing in teenagers and adults was 90%. In comparison, the specificity was only 25%. The diagnostic sensitivity of reddening of the face with vomiting and inspiratory whooping following excessive coughing was only 25% and 19%, respectively. However, the specificity of these two symptoms was relatively high, being 80% and 86%, respectively. An elevation in the white blood cell count and lymphocyte count did not show good specificity. Therefore, reddening of the face with vomiting and inspiratory whooping’ following excessive coughing are preferred symptoms for confirming the diagnosis of pertussis-like syndrome in the clinical setting.

Reporting Checklist: The authors have completed the STROBE reporting checklist. Available at http://dx.doi.org/10.21037/tp-21-140

Conflicts of Interest: All authors have completed the ICMJE uniform disclosure form (available at http://dx.doi.org/10.21037/tp-21-140). The authors have no conflicts of interest to declare.

Ethical Statement: The authors are accountable for all aspects of the work in ensuring that questions related to the accuracy or integrity of any part of the work are appropriately investigated and resolved. All procedures performed in this study involving human participants were in accordance with the Declaration of Helsinki (as revised in 2013). The Institutional Review Committee approved the retrospective analysis without providing written ethical approval, because it was an objective report complying to the condition of protecting the privacy of the patients. Individual consent for this retrospective analysis was waived.