Case report of juvenile polyposis/hereditary hemorrhagic telangiectasia syndrome: first report in Korea with a novel mutation in the SMAD4 gene

Juvenile polyposis syndrome (JPS) is a rare autosomal dominant condition, characterized by multiple hamartomatous polyps throughout the gastrointestinal (GI) tract which increases the risk of development of GI malignancy (1). Well known genetic mutations associated with JPS are the SMAD4 or BMPR1A genes which are found in 40% to 60% of patients with JPS (2). Patients with SMAD4 mutation may also have clinical features of hereditary hemorrhagic telangiectasia (HHT). HHT is a vascular malformation disorder characterized by mucocutaneous telangiectases, epistaxis, and arteriovenous malformations (AVMs) that may occur in the lungs, liver, brain, and GI tract (3). This rare overlapping syndrome of JPS and HHT caused by mutations in the SMAD4 gene is termed JPS/HHT syndrome (JPHT; MIM# 175050) (1,4-6).

We present the following article in accordance with the CARE reporting checklist (available at http://dx.doi.org/10.21037/tp-21-12).

A 15-year-old Korean boy with clinically diagnosed JPS was referred due to recurrent hematochezia. He had been followed at a tertiary hospital from 7 years of age for JPS, where he had received polypectomy annually. Thirty to 50 colonic polyps were observed at each exam, and histologic exams of the polypectomized specimens were compatible for juvenile polyps. Esophagogastroduodenoscopy and small bowel series conducted along with polypectomies were unremarkable. He had frequent events of epistaxis since 5 years of age. The patient was the only child in the family and past medical history of the parents were unremarkable.

On admission, his vital signs were normal. Physical examination revealed telangiectases on the lip and tongue, and digital clubbing was observed on the extremities (Figure 1). Initial laboratory tests showed a white blood cell count 7,170/µL, hemoglobin 9.4 g/dL, hematocrit 32.1%, platelet count 432,000/µL, serum iron 13 µg/dL, ferritin <13 ng/mL, total iron-binding capacity 443 µg/dL. Other laboratory tests were all in normal range. Ileocolonoscopy showed more than 50 pedunculated and sessile polyps throughout the colon and rectum (Figure 2), and polypectomy was conducted. Histologic exams of the polypectomized specimens were compatible for juvenile polyps. Esophagogastroduodenoscopy was unremarkable. 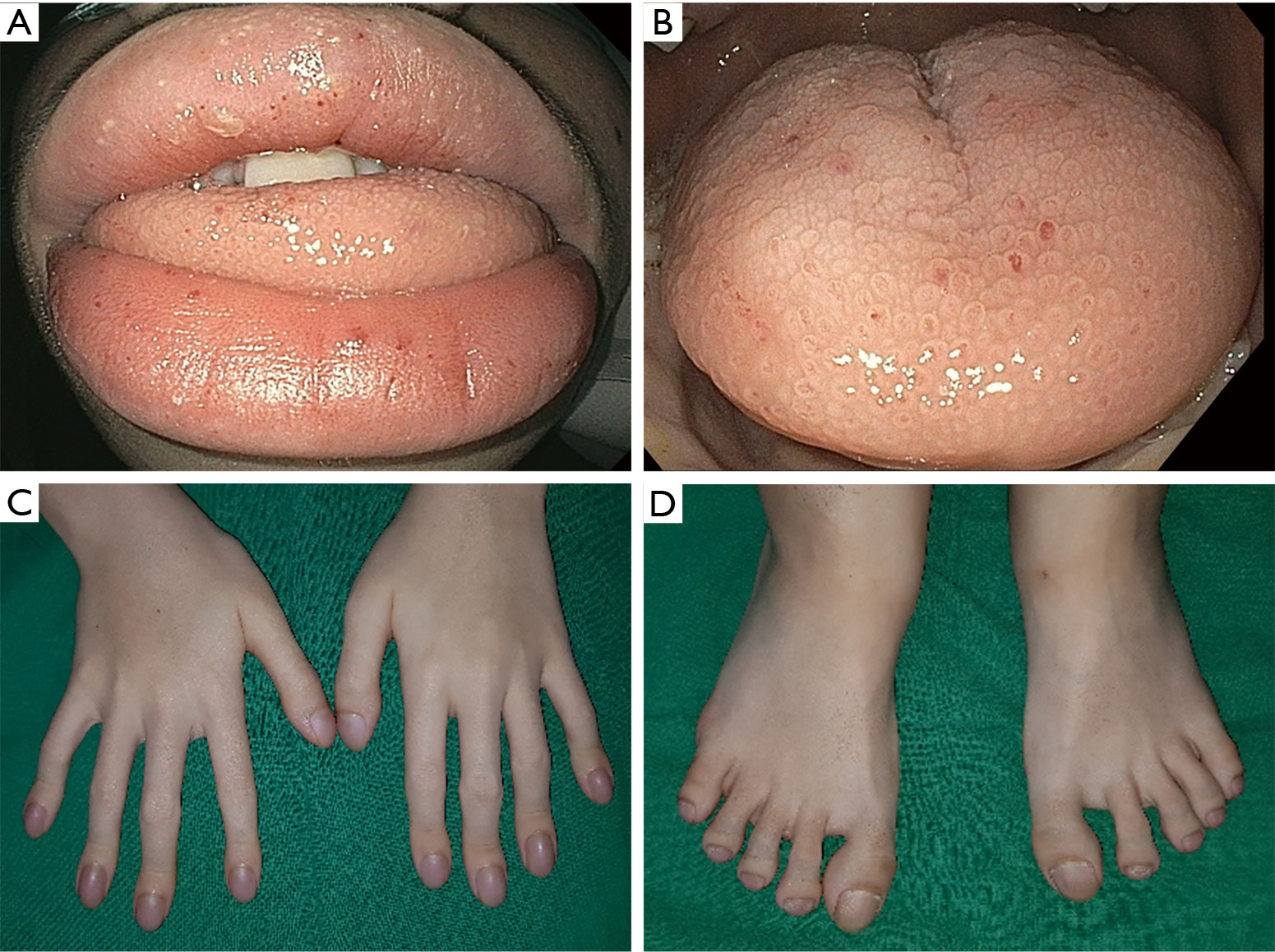 Figure 2 Ileocolonoscopy images. Numerous polyps are observed in (A) the ascending colon and (B) the transverse colon. 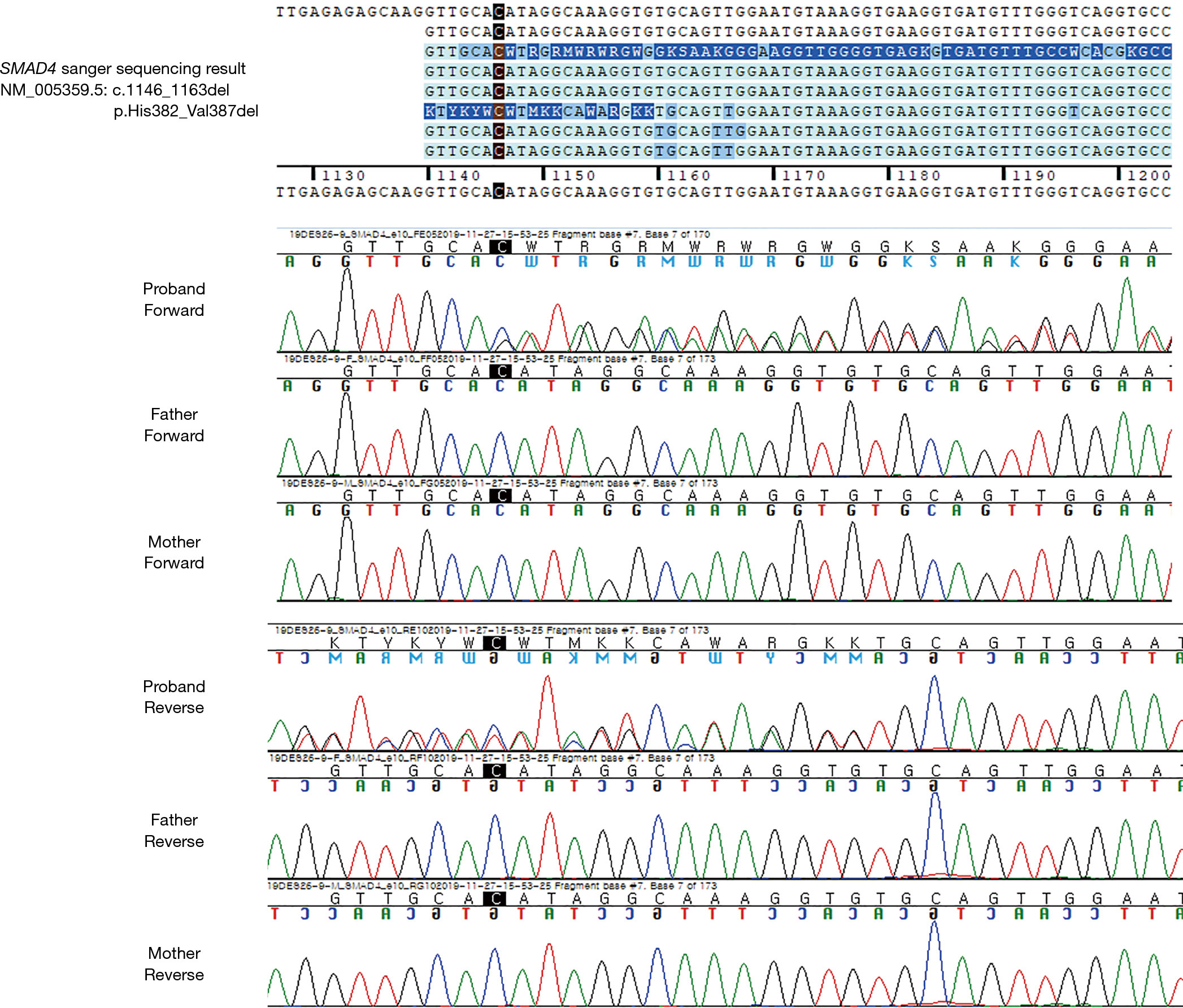 Figure 3 Sanger sequencing of the SMAD4 gene in the patient and his parents.

Capsule endoscopy revealed 10 small polyps and telangiectases were observed in the jejunum (Figure 4). Considering the possibility of coexisting AVMs in other organs, further evaluation was conducted. Magnetic resonance (MR) imaging and angiography of the brain was unremarkable. Computer tomographic (CT) angiography of the abdomen was also unremarkable, while MR angiography of the chest revealed a total five AVMs in both lungs with feeding vessels sizes of 3–4 mm (Figure 5). Transthoracic echocardiography was unremarkable. The patient was diagnosed with JPHT syndrome. The patient is currently scheduled for embolization of the feeding vessels. 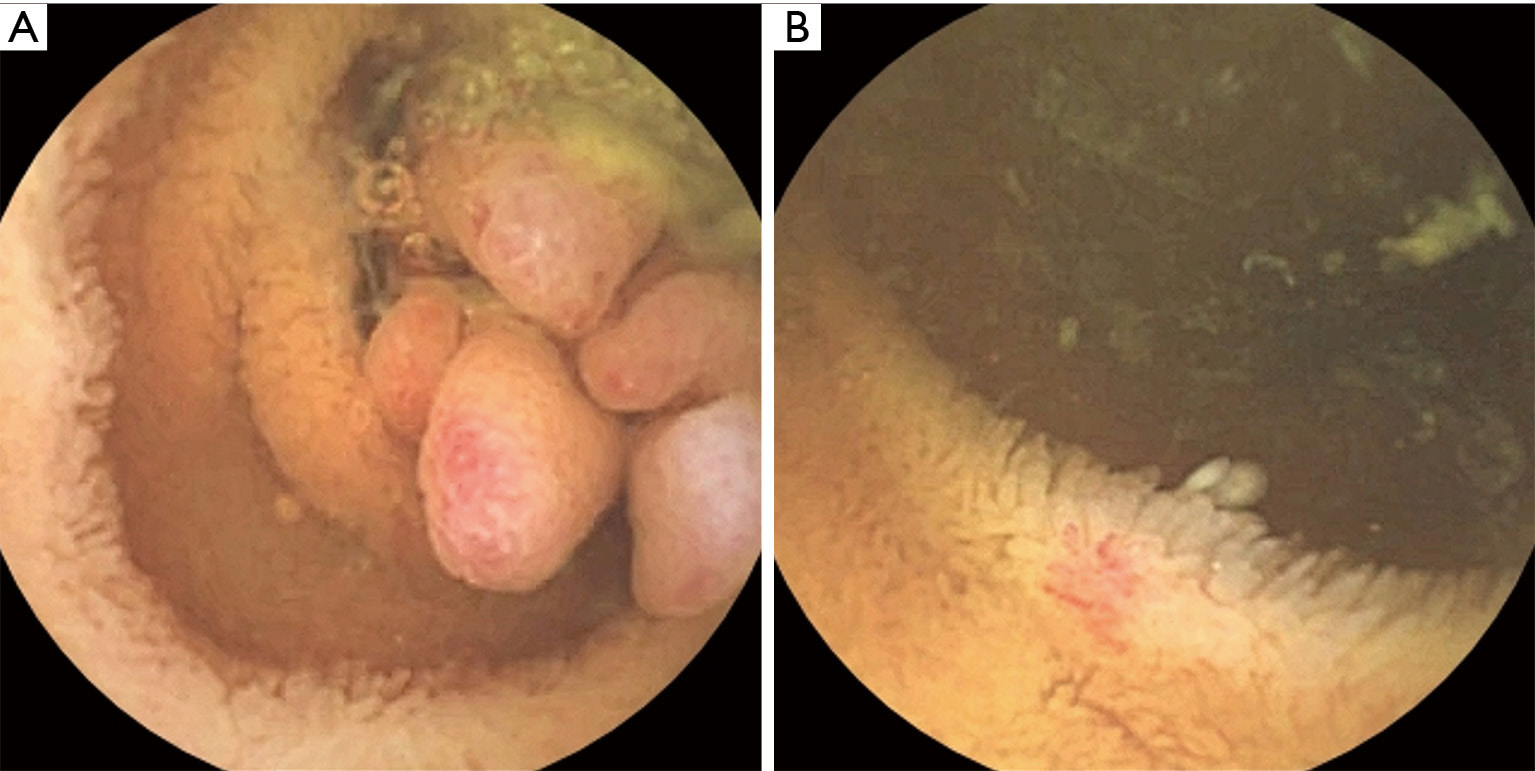 Figure 4 Capsule endoscopy images. (A) Polyps and (B) telangiectases are observed in the jejunum.

This case report was approved by the Institutional Review Board of Kyungpook National University Chilgok Hospital (Number 2020-09-012). All procedures performed in studies involving human participants were in accordance with the ethical standards of the institutional and national research committees and with the Helsinki Declaration (as revised in 2013). Written informed consent was obtained from the patient.

A common underlying genetic mutation responsible for both syndromes of JPS and HHT had been suggested after the first case report of JPS with pulmonary AVMs in 1980 (10). The genetic basis of this overlapping syndrome of JPS and HHT was first revealed by Gallione et al. in 2004 (4), reporting that mutations in one of the previously known genes involved in the pathogenesis of JPS, the SMAD4 gene, was also capable of causing features of HHT. This overlapping syndrome of JPS and HHT is now termed JPHT syndrome (Figure 6). 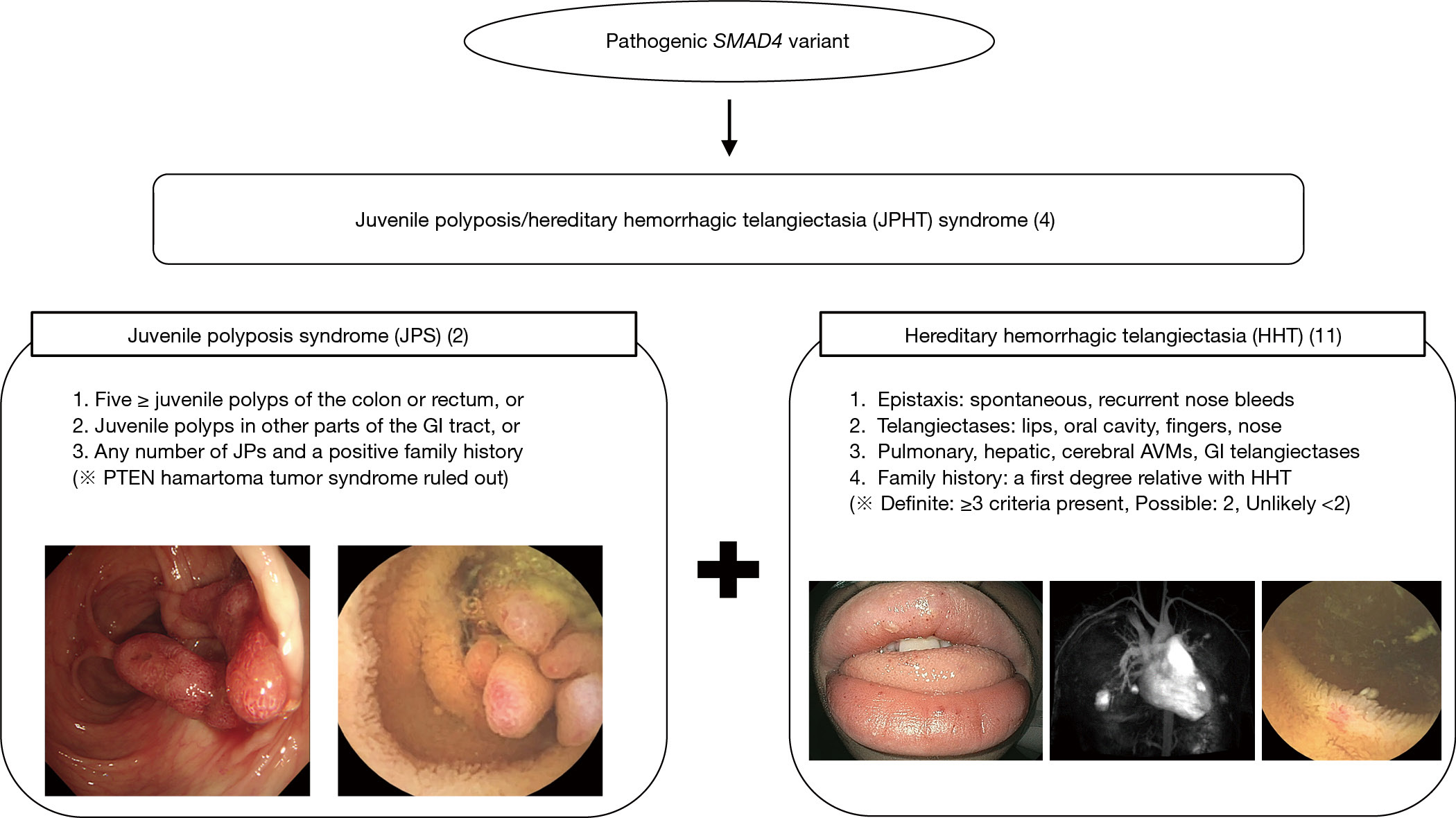 Figure 6 Clinical features and the diagnostic criteria of the overlapping syndrome of juvenile polyposis/hereditary hemorrhagic telangiectasia (JPHT) syndrome due to pathogenic variants of the SMAD4 gene (2,4,11).

To our knowledge the variant in this patient has never been reported. According to the Sequence Interpretation Guidelines of the American College of Medical Genetics and Genomics and the Association for Molecular Pathology (12), the c.1146_1163del variant could be classified as a likely pathogenic variant (LPV) based on the following evidence: it is absent in the gnomAD population database (PM2), de novo variant in a patient with the disease and no family history (PS2), patient’s phenotype or family history is highly specific for a disease with a single genetic etiology (PP4).

According to studies from Western countries, the incidence of JPS is approximately 1 in 16,000 to 100,000 and 27% of JPS is attributed to pathogenic variants in the SMAD4 gene (1). Meanwhile, there is scarce data regarding the distribution of pathogenic SMAD4 variants among the East Asian population, and few cases of JPHT have been reported in literature (13). To date this is the first case of JPHT syndrome reported in Korea. There have been reports of JPS patients with SMAD4 variants (14,15). However, no features of HHT were reported in these patients (14,15). Meanwhile, a recent multicenter case series investigating the genetic analysis of HHT in Korea reported that among 49 patients who had underwent genetic testing, 28 had ENG mutations and 19 had ACVRL1 mutations, while the other two patients were all negative for ENG, ACVRL1, and SMAD4 mutations (16). Similarly, a study in Chinese families with HHT revealed variants in ACVRL1 and ENG, while no SMAD4 mutations were detected (17).

Patients with JPS are at a high risk of developing early-onset GI cancers (1,7,18). It is well known that the loss of tumor suppressor proteins, including transforming growth factor-β (TGF-β) is crucial in the development of colorectal cancers (19). TGF-β signaling reduces proliferation and promotes apoptosis and differentiation in colon epithelial cells, and therefore loss of TGF-β signaling leads to cancer development (19). The SMAD4 protein belongs to the TGF-β family and plays a role in signaling from the cell membrane to the nucleus (19). Because of this potential of cancer development, upper GI endoscopy and colonoscopy surveillance is recommended to start from 12 to 15 years of age and repeated in intervals of 1–5 years (2).

Treatment of pulmonary AVMs is indicated when the patient has symptoms such as dyspnea, exercise intolerance, and hypoxemia (3). However, embolization should also be considered in asymptomatic patients who have pulmonary AVMs with feeding vessels of a diameter ≥3.0 mm in order to prevent paradoxical thrombotic and septic emboli and massive bleeding (20). In this patient, AVMs with feeding vessels sizes of 3–4 mm were detected on MR angiography of the chest. The patient is currently scheduled for embolization of the feeding vessels in order to prevent these complications.

In conclusion, we report the first case of JPHT in Korea, with a novel variant in the SMAD4 gene. Patients with JPS should undergo genetic evaluation of associated genes including SMAD4, and those with genetically confirmed SMAD4 variants should undergo proper evaluation for coexisting asymptomatic AVMs in order to prevent life-threatening complications.

Funding: This work was supported by the National Research Foundation of Korea (NRF) grant funded by the Korean government (MSIT) (No. 2021R1A2C1011004) and granted to Ben Kang.

Reporting Checklist: The authors have completed the CARE reporting checklist. Available at http://dx.doi.org/10.21037/tp-21-12

Conflicts of Interest: All authors have completed the ICMJE uniform disclosure form (available at http://dx.doi.org/10.21037/tp-21-12). Dr. BK reports grants from National Research Foundation of Korea (NRF) funded by the Korean government (MSIT), during the conduct of the study. The other authors have no conflicts of interest to declare.

Ethical Statement: The authors are accountable for all aspects of the work in ensuring that questions related to the accuracy or integrity of any part of the work are appropriately investigated and resolved. This case report was approved by the Institutional Review Board of Kyungpook National University Chilgok Hospital (Number 2020-09-012). All procedures performed in studies involving human participants were in accordance with the ethical standards of the institutional and national research committees and with the Helsinki Declaration (as revised in 2013). Written informed consent was obtained from the patient.