A neonate with molybdenum cofactor deficiency type B

Molybdenum cofactor deficiency (MoCD) is an autosomal recessive disorder, which causes the combined deficiency of molybdenum-dependent enzymes, including sulfite oxidase, xanthine dehydrogenase, and aldehyde oxidase (1). More than 50% of the patients have MOCS1 mutations, followed by MOCS2, only one patient has been described with MOCS3 gene mutation (2). So far two families are reported have GEPH mutations (3). Accumulation of toxic levels of sulfite oxidase maybe the main pathogenic mechanism for the neurological dysfunction.

A female Chinese infant weighing 3,960 g was born after 39+3 week’s gestation to a 27-year-old primigravida mother by cesarean section. The amniotic fluid was clear and there were no abnormalities with umbilical cord or placenta. The Apgar scores of the baby were 9 at 1 min and 10 at 5 min. She was the first baby of an unconsanguineous family. There was nothing special about the family history. The girl was well until the third day after birth, when she showed feeding difficulties, strenuous breathing, and refractory convulsions. The local hospital started intravenous nutrition, intubation and mechanical ventilation, antibiotics, and anticonvulsant therapy, while the seizures still couldn’t be controlled. The cerebrospinal fluid was normal. One the third day of life, she had a brain MRI which showed low-density signal around the lateral ventricle (Figure 1). Then the patient was transferred to our hospital. She had dystonia and loss of reflexes when she hospitalized while no dysmorphic features were noted. During the period of hospitalization, we found the serum uric acid was undetectable. The electroencephalogram was abnormal. The background activity was burst suppression, the duration of the outbreak period was about 4–9 seconds, and the duration of the inhibition period was about 5–11 seconds (Figure 2). There were no abnormalities in other organs and metabolic investigation of blood and urine samples was normal too. The blood fluid culture, TORCH examination was also negative, that ruled out infection. The parents decided to sign off and went to Shanghai for further treatment after 5 days. At the age of 23-day, the MRI (from Shanghai) revealed symmetric white matter multicyclic changes (Figure 3). We performed a genetic whole exon test on this infant and her parents. We found a homozygous mutation at exon 4, the 168 base deletion, resulting frameshift mutation (Figure 4). This mutation present in the MOCS2 gene was a pathogenic mutation site and was related to Molybdenum cofactor deficiency B This mutation has not been reported in the 1,000 genome population database (GnomAD, 1,000 genome). And the parents were carriers.

Figure 1 Axial T1-weighted image of brain MRI. (A) At age 3 days from local hospital: there were hypointensity signals around the lateral ventricle (red arrows). (B) At age 23 days from Shanghai: there were symmetric subcortical cystic encephalomalacia and agenesis of the corpus callosum (blue arrows). 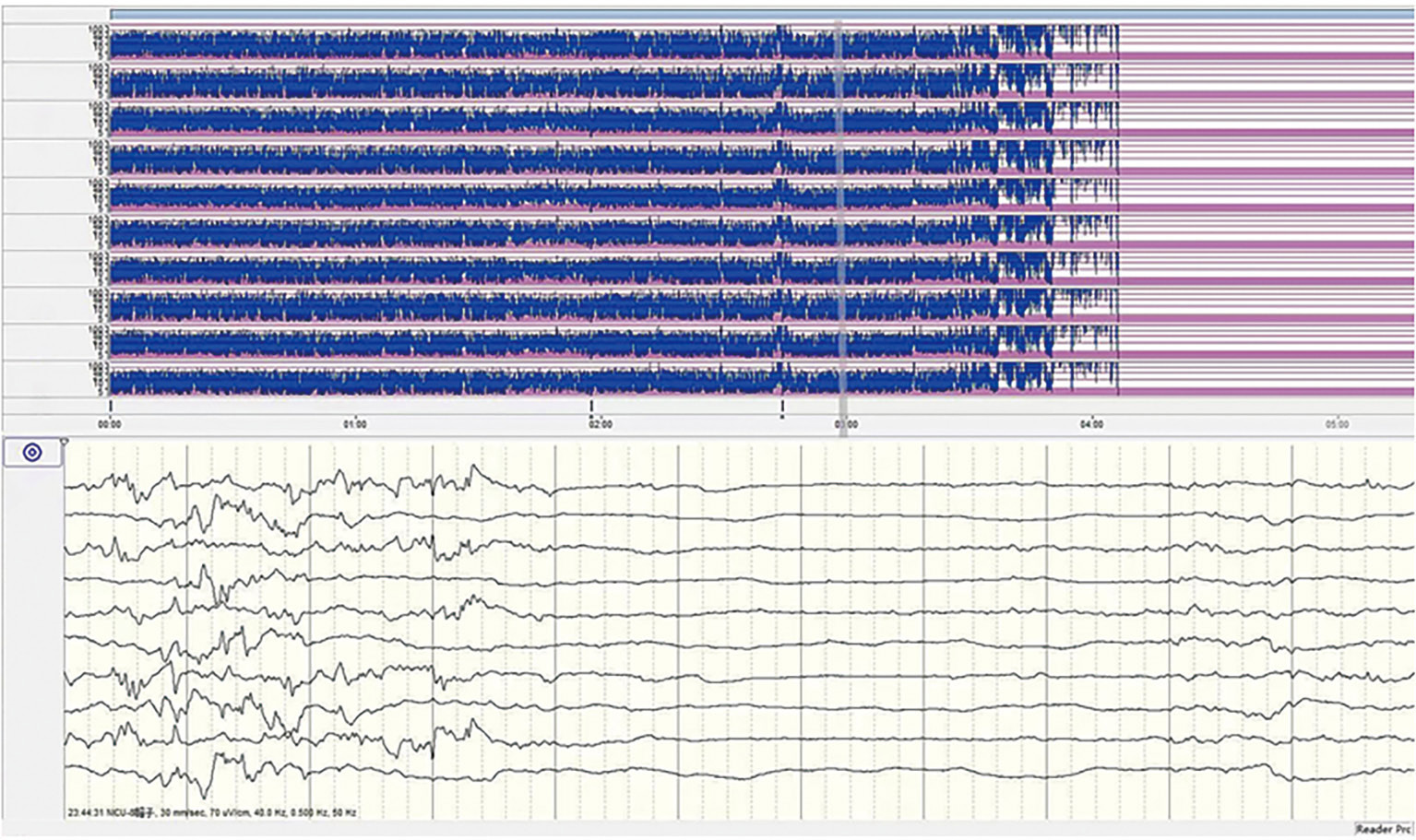 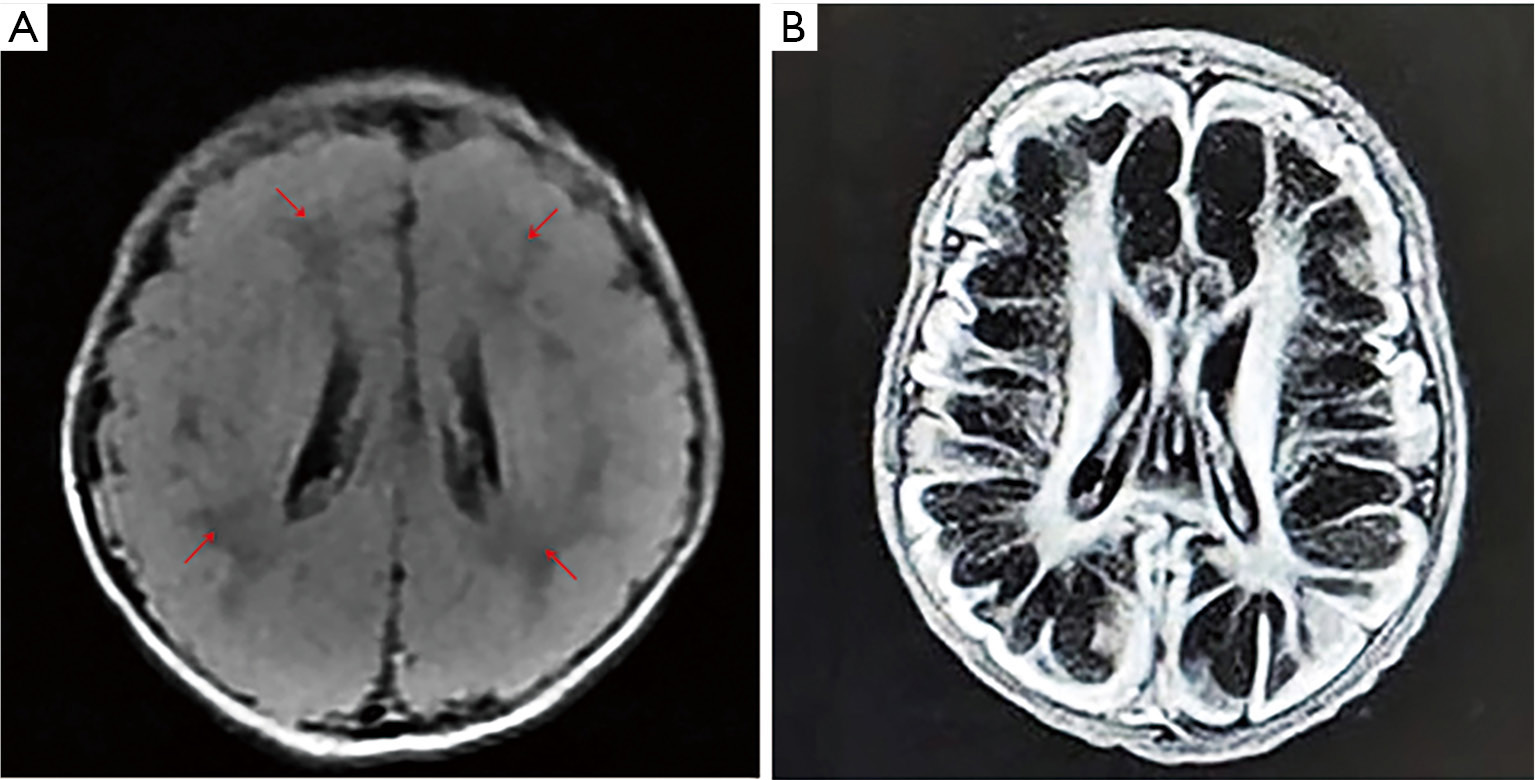 Figure 3 T2 Flair image of brain MRI. (A) At age 3 days from local hospital: there were low-density signals around the lateral ventricle (red arrows). (B) At age 23 days from Shanghai: there were symmetric subcortical cystic white matter changes. 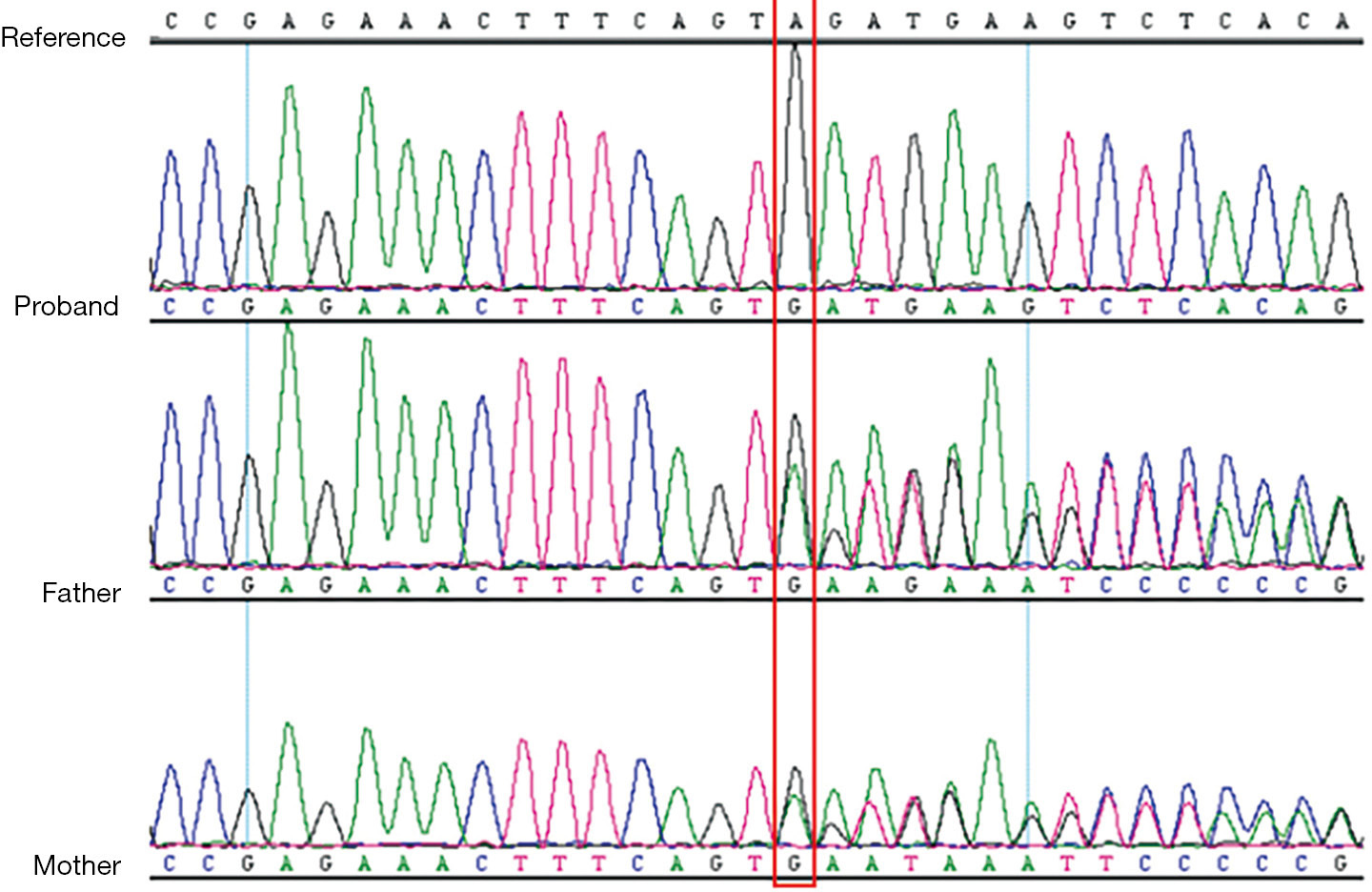 Figure 4 Full exon detection report: the mutation is at exon 4, the 168 base deletion, resulting frameshift mutation.

All procedures performed in study were approved by the ethical review committee of The Second Affiliated Hospital & Yuying Children’s Hospital Affiliated to Wenzhou Medical University and in accordance with the Helsinki Declaration (as revised in 2013). The Written informed consent was obtained from the patient’s parents for publication of this case report and any accompanying images.

There are three steps of molybdenum cofactor synthesis. The MOCS1A and MOCS1B genes encode an enzyme complex that forms cyclic pyranopterin monophosphate (cPMP) from GTP; the products of MOCS2 (MOCS2A and MOCS2B) and MOCS3 genes convert cPMP to molybdopterin (MPT); finally, molybdum is inserted to form MoCo by GEPH gene (1,6). So far, the patients with MOCS1A or MOCS1B mutation have been treated with a stable injectable form of cPMP (7), but it is not used in patients with MOCS2 mutation.

The patients with MOCS2 mutation are divided into two forms: early-onset form (beginning during neonatal period), and late-onset form. According to the literature, there are 11 cases of early-onset patient have been previously reported (Table 1) (8-17). Table 1 summarizes the clinical, laboratorial, imagological, genetic findings of these patients. Early-onset patients always onset within one month after birth, refractory convulsion, feeding difficulty, hypomyotonia and early death, but not all of them have facial dysmorphism (17). The patient in our case is also typically early-onset and with no dysmorphic features. And she is the first Chinese patient reported with symptoms onset in the newborn period. So, it has clinical significance in the future for the diagnosis of patients with similar clinical manifestations in China. 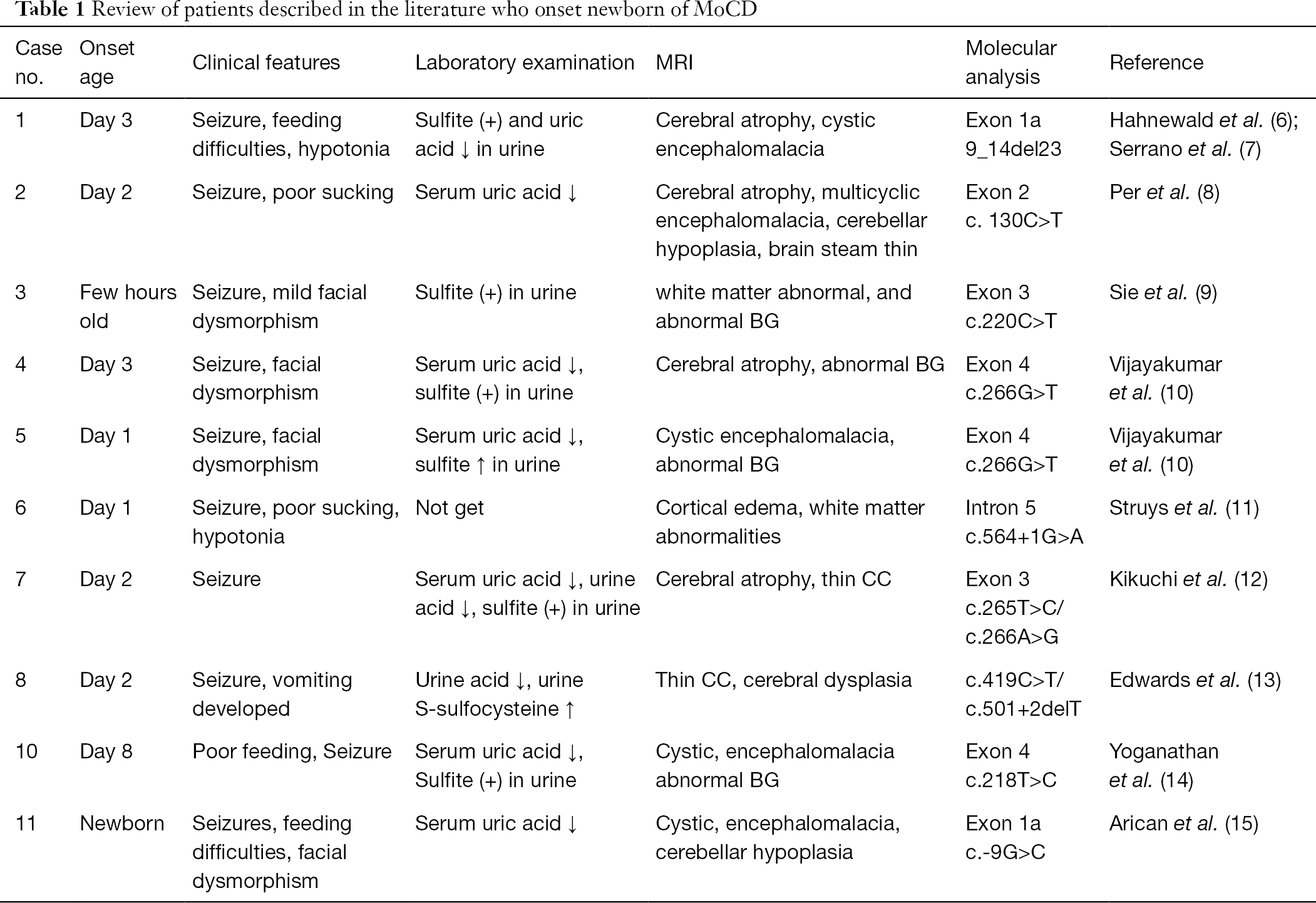 From the laboratory examination of the patient, we just find serumuric acid was undetectable. From the references of neonate with MOCS2 that have been published, laboratory abnormalities include very low levels of serum and urine uric acid, positive urine sulfite test, and increased urine levels of xanthine, hypoxanthine and S-sulfocysteine (6,18). Neonatologists can consider doing further urine analyses if similar clinical manifestations are encountered.

The cranial MRI of all the patients onset early has similarities to hypoxic-ischemic encephalopathy (19) and the neurological deterioration develops rapidly. The first MRI of our patient is almost normal, while the MRI on the 23-day-old, shows cystic necrosis of cerebral white matter and thin corpus callosum.

The patient has a homozygous mutation at exon 4, the 168 base deletion, resulting frameshift mutation. And the mutation has not been reported before. We also find the parents of the girl are carriers, although they are not consanguineous.

The injectable cyclic pyranopterin monophosphate (c-PNP) has been effective in MoCoD-A patients, especially in the early stages of disease (20). While there is no effective treatment for the patients with MOCS2 gene mutation so far.

The patients who diagnosed with MOCS2 in neonate period always show severe seizure, feeding difficulty and low muscle tone, but not all of them have facial features. And the serum uric acid level is low. The MRI of our patient is almost normal in the beginning of the disease, but progresses rapidly, just 20 days later, it shows cavitary changes of white matter. And the disease-causing mutation of MOCS2 in our patient has not been reported before. Unfortunately, there is no treatment for the patients with MOCS2, but we can support genetic counseling for the family.

We want to acknowledge the following two doctors: Jin Wang (Department of Neonatology, Children’s Hospital of Fudan University), Yiwei Zhao (Department of Neonatology, Yueqing People’s Hospital). Jin Wang and Yiwei Zhao made a lot of work on the writing, revision and finalization of the paper. They provided complete medical history of the infant and diagnosis and treatment ideas. They gave professional advice to the charts in the article, and participated in the integration of references. At the same time, for the editorial department’s revision, they also helped to support part of the modification suggestions and professional academic advice. After consultations, all the authors agreed with the acknowledgment to these two doctors.

Reporting Checklist: The authors have completed the CARE reporting checklist. Available at http://dx.doi.org/10.21037/tp-20-357

Conflicts of Interest: All authors have completed the ICMJE uniform disclosure form (available at http://dx.doi.org/10.21037/tp-20-357). The authors have no conflicts of interest to declare.

Ethical Statement: The authors are accountable for all aspects of the work in ensuring that questions related to the accuracy or integrity of any part of the work are appropriately investigated and resolved. All procedures performed in study were approved by the ethical review committee of The Second Affiliated Hospital & Yuying Children’s Hospital Affiliated to Wenzhou Medical University and in accordance with the Helsinki Declaration (as revised in 2013). Written informed consent was obtained from the patient’s parents for publication of this case report and any accompanying images.