Extrauterine growth restriction (EUGR) is a clinical problem in which the growth values in affected neonates are lower than the tenth percentile of intrauterine growth expectation in preterm neonates at the time of discharge (1-3). Previous studies have put forth the idea that EUGR may induce adverse health outcomes such as impaired neurodevelopment (4) and metabolic syndromes (5). Although the factors leading to EUGR are complicated, one of the most principal may be energy deficiency (6). Regardless of the growing amount of ameliorative treatment and care regimens, it is important to understand the mechanisms underlying EUGR.

By utilization of the metagenome together with nontargeted liquid chromatography-mass spectrometry (LC-MS) metabolomics, our knowledge of the gut microbiota has been greatly extended. In the present study, 50 EUGR infants and the 23 non-EUGR infants were enrolled. The gut microbiota, as well as the metabolites in feces and blood were examined to identify potential biomarkers. Any correlations between differential species and metabolites were evaluated to understand further the relationship between alterations in the microbiota and the metabolism status of the host.

We present the following article in accordance with the MDAR reporting checklist (available at: http://dx.doi.org/10.21037/tp-20-431).

The study was conducted in accordance with the Declaration of Helsinki (as revised in 2013). The study was approved by the Research Ethics Committee of Shanghai Jiao Tong University Affiliated Sixth People’s Hospital (2017-009) and informed consent was taken from all the patients.

This retrospective study was carried out by reviewing the clinical charts of 73 preterm infants in the Shanghai Jiao Tong University Affiliated Sixth People’s Hospital. The inclusion criteria were: (I) infants with all neonatal curves below the 10th percentile of infants in the same gestational age (GA) when they were discharged from hospital; (II) written informed consent was obtained from the parents. The exclusion criteria were: (I) born with severe abnormalities, congenital heart or pulmonary disease, severe digestive tract malformation, metabolic disease or chromosomal disorders; (II) dead during hospitalization or with poor comorbid disease control; (III) mandatory discharge from the hospital without meeting the standard required.

The fecal samples were collected in sterile containers and kept at −20 °C until further examination. The genomic DNA was purified with a QIAamp PowerFecal DNA Kit following the instructions of the manufacturer.

Extraction of metabolites from feces and blood

The fecal samples and blood samples were collected in sterile containers and kept at −20 °C until further examination.

All the dried samples were dissolved with 150 µL of a 2-chlorobenzalanine (4 ppm) methanol aqueous solution (4:1, 4 °C) and filtered with a 0.22-µm membrane. Then, the samples were ready for LC-MS.

Chromatographic separation was accomplished in a Thermo Ultimate 3000 system equipped with an ACQUITY UPLC® HSS T3 Column (150×2.1 mm, 1.8 µm, Waters) maintained at 40 °C. The temperature of the autosampler was 8 °C. Gradient elution of the analytes was carried out with 0.1% formic acid in acetonitrile (C) and 0.1% formic acid in water (D) or acetonitrile (A) and 5 mM ammonium formate in water (B) at a flow rate of 0.25 mL/min. The injection of 2 µL of each sample was done after equilibration.

The ESI-MSn experiments were executed on a Thermo Q Exactive Focus mass spectrometer with a spray voltage of 3.8 kV and −2.5 kV in the positive and negative modes, respectively. The sheath gas and auxiliary gas were set at 45 and 15 arbitrary units, respectively. The capillary temperature was 325 °C. The Orbitrap analyzer scanned over a mass range of m/z 81–1,000 for a full scan at a mass resolution of 70,000. Data-dependent acquisition MS/MS experiments were performed with HCD scanning. The normalized collision energy was 30 eV. Dynamic exclusion was implemented to remove some unnecessary information from the MS/MS spectra.

SPSS 23 was used to analyze the data, which are presented as the mean ± SE. The Wilcoxon rank sum test was employed for comparisons between groups with a non-normal distribution. Correlations between variables were evaluated using the Spearman coefficient. A P value <0.05 was considered to be a statistically significant finding.

Table 1 shows the baseline of the study cohorts. In detail, we enrolled 50 infants with EUGR and 23 infants without EUGR between December 2017 and July 2018. 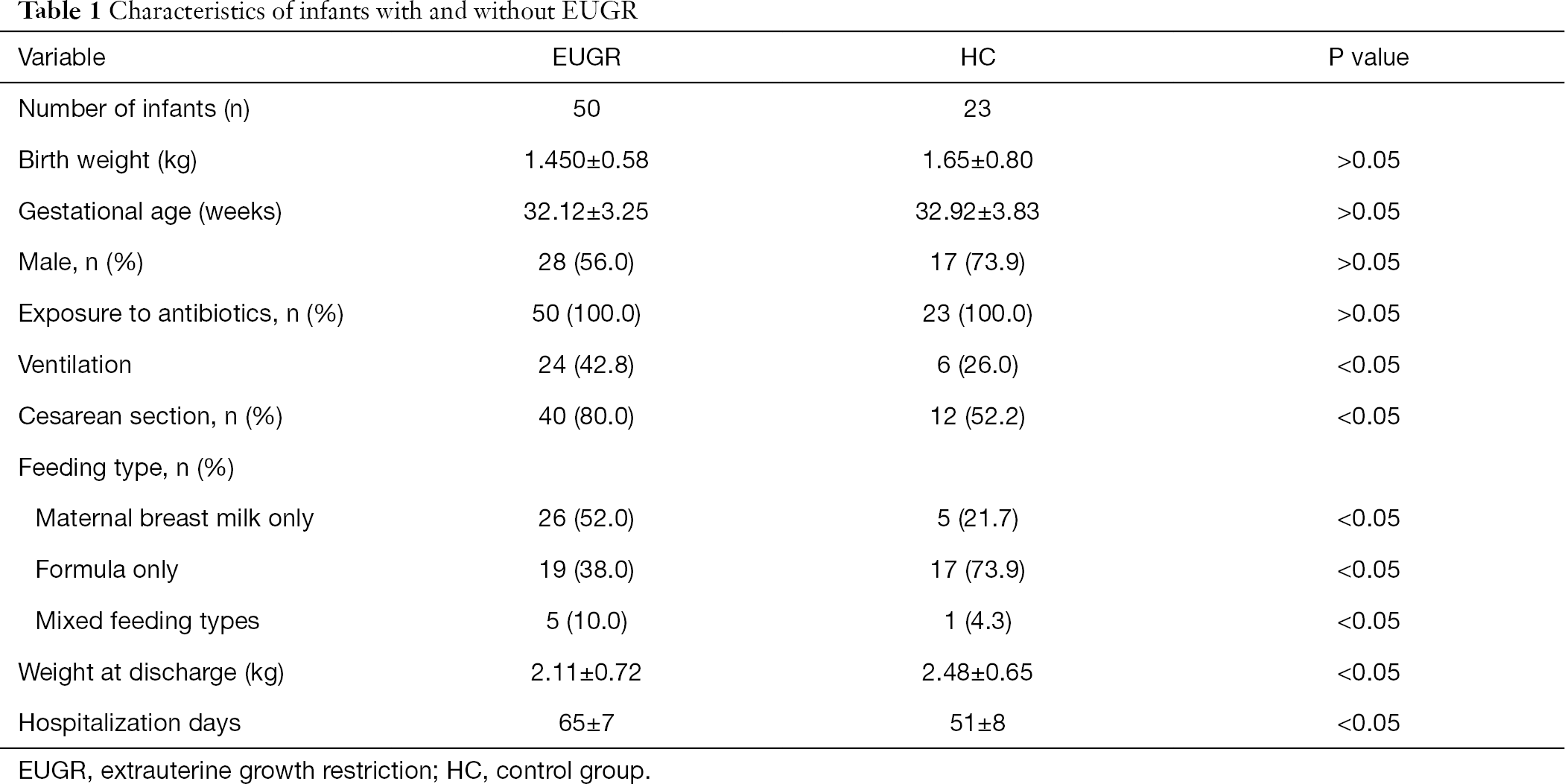 Table 1 Characteristics of infants with and without EUGR
Full table 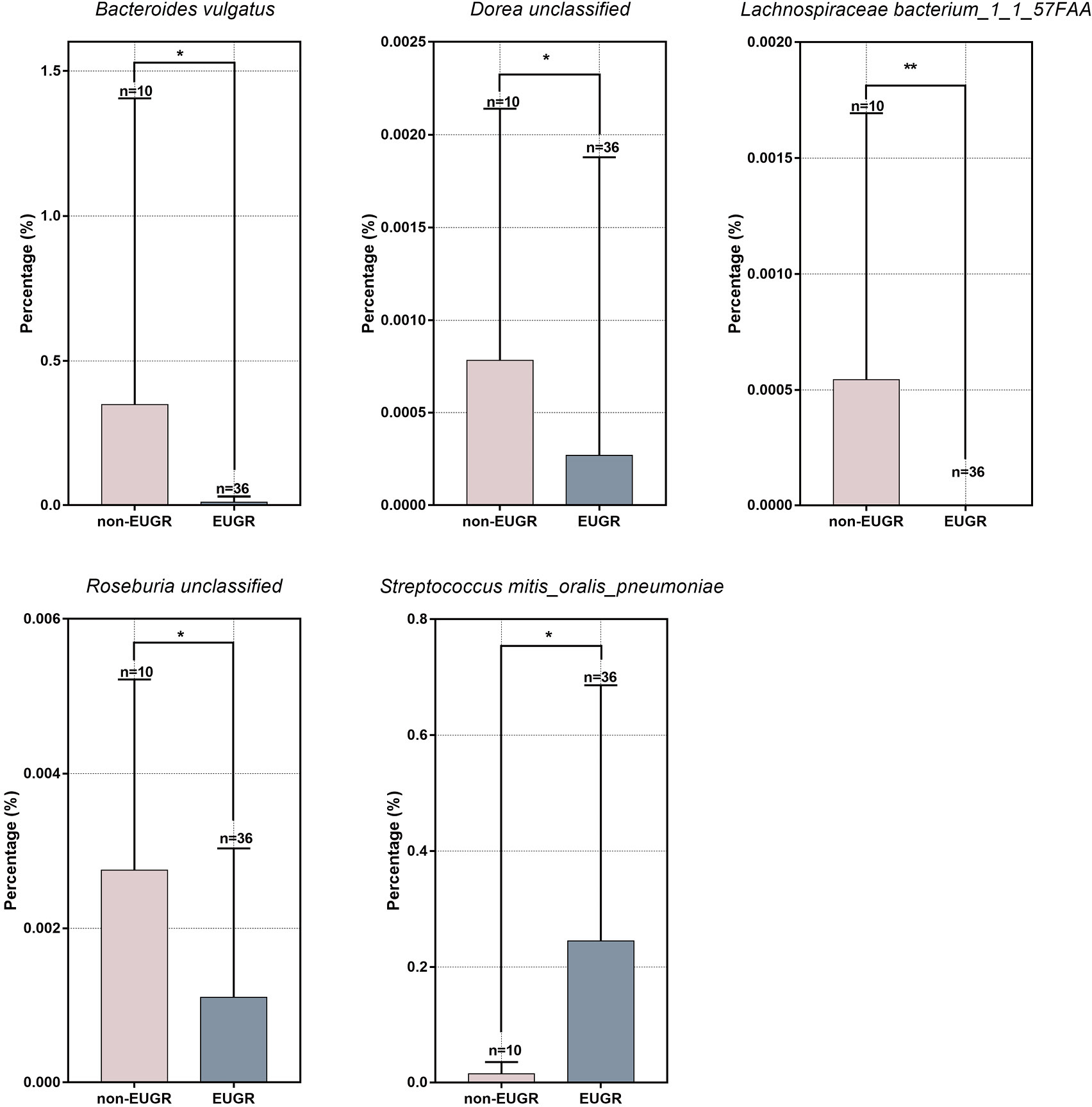 To investigate the potentially influenced metabolic pathways induced by EUGR status, we further analyzed the metagenome sequencing readings with KEGG. As shown in Figure 2, there were seven different enriched KEGG pathways between the non-EUGR group and EUGR group. Among these pathways, the non-EUGR group exhibited significantly higher levels of bile secretion (P<0.001), galactose metabolism (P<0.05), glycine, serine, and threonine metabolism (P<0.05), and the renin-angiotensin system (P<0.05) compared with the EUGR group. However, the EUGR group exhibited significantly higher levels of the cAMP signaling pathway (P<0.05), yeast meiosis (P<0.05), and oxidative phosphorylation (P<0.05) in comparison to the non-EUGR group. 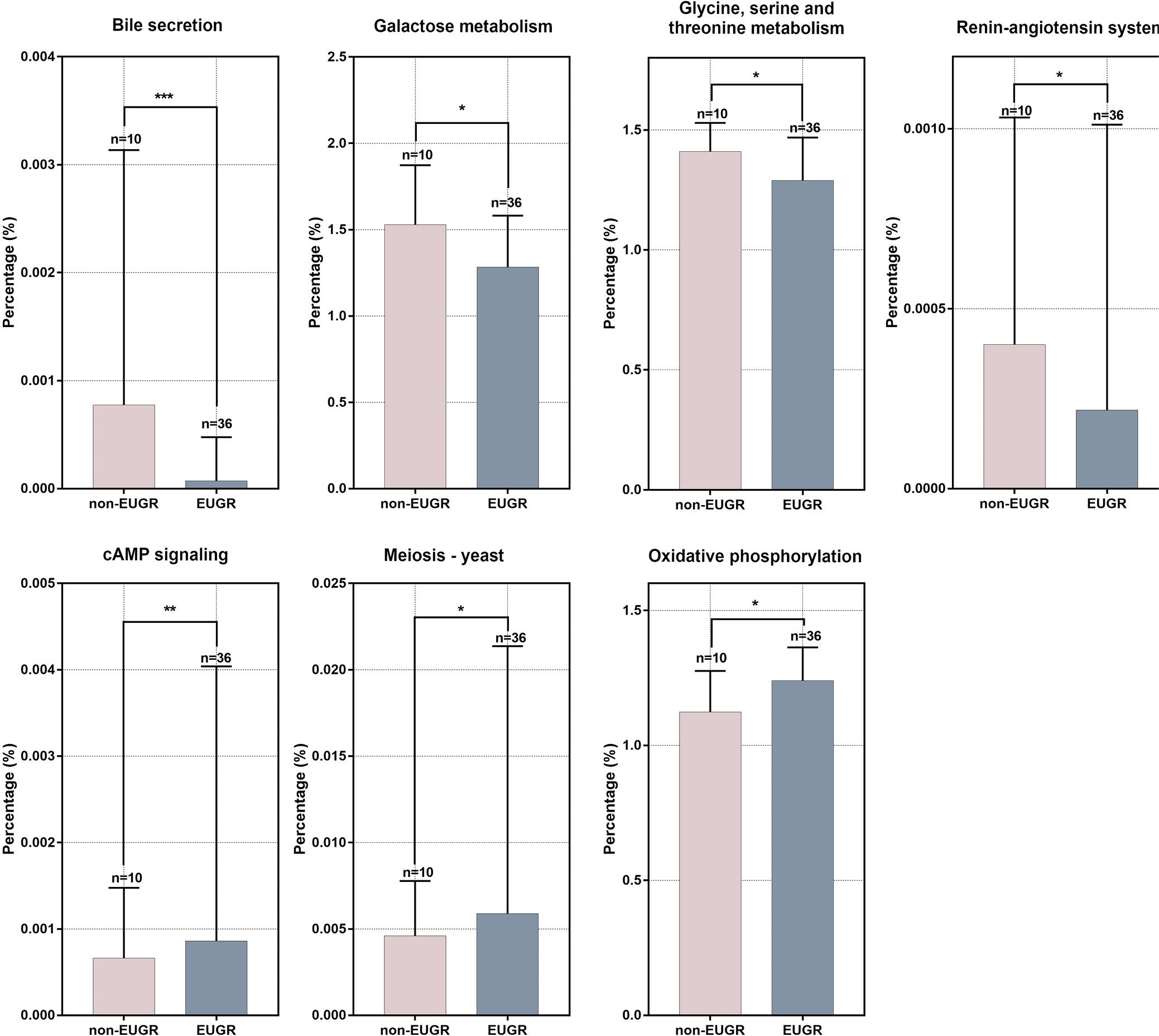 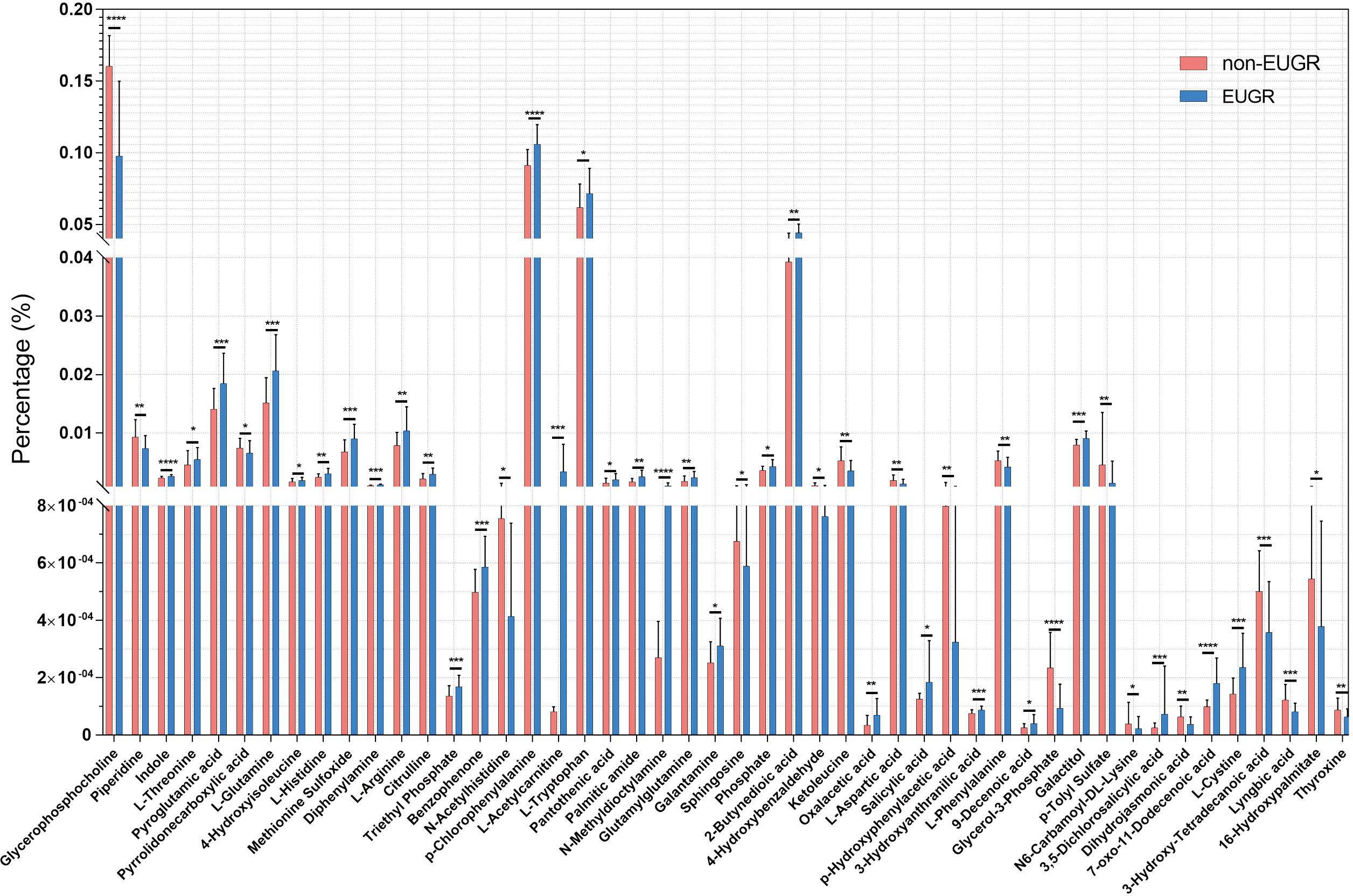 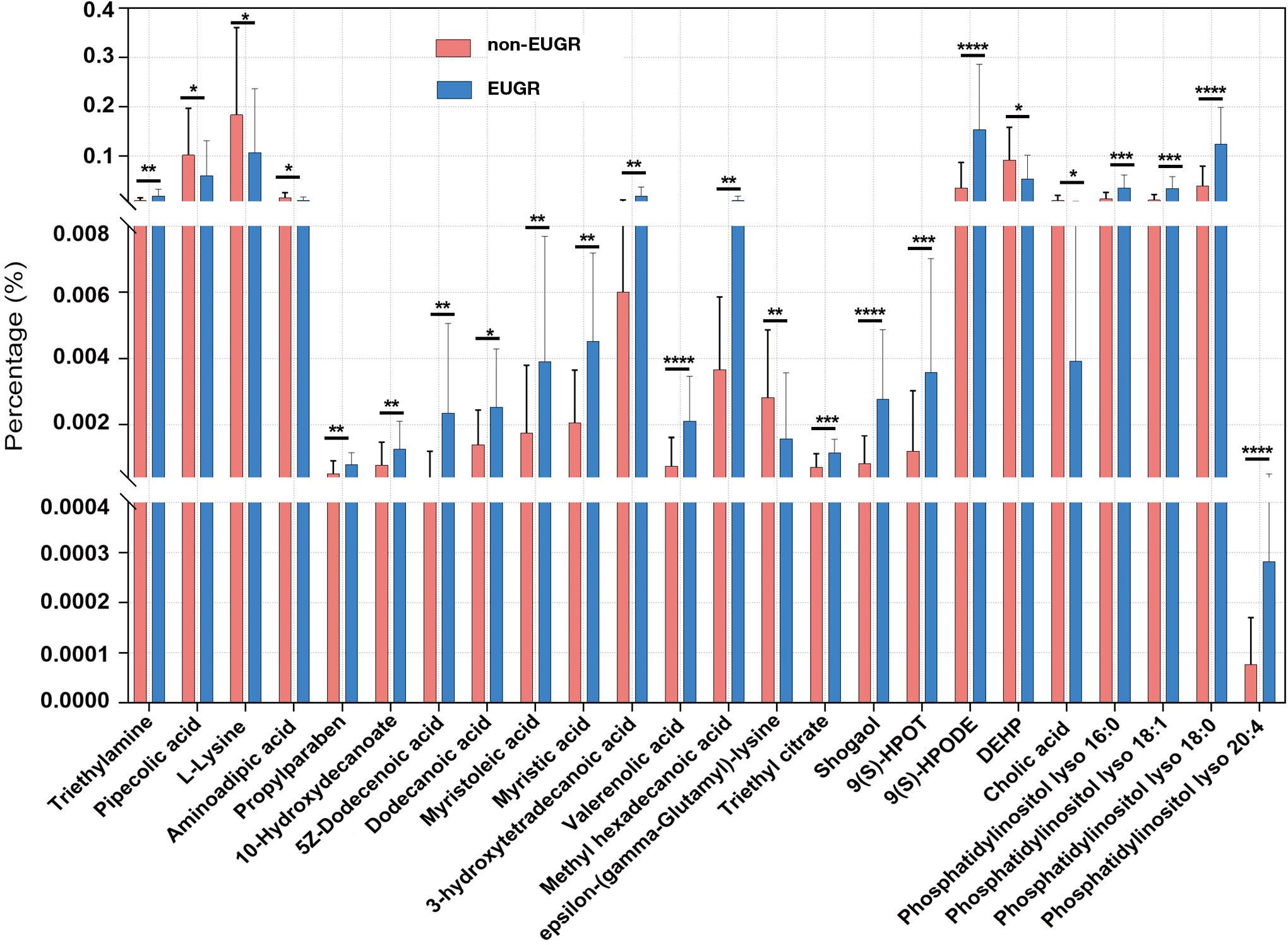 Correlation between the different microbial species and different KEGG pathways 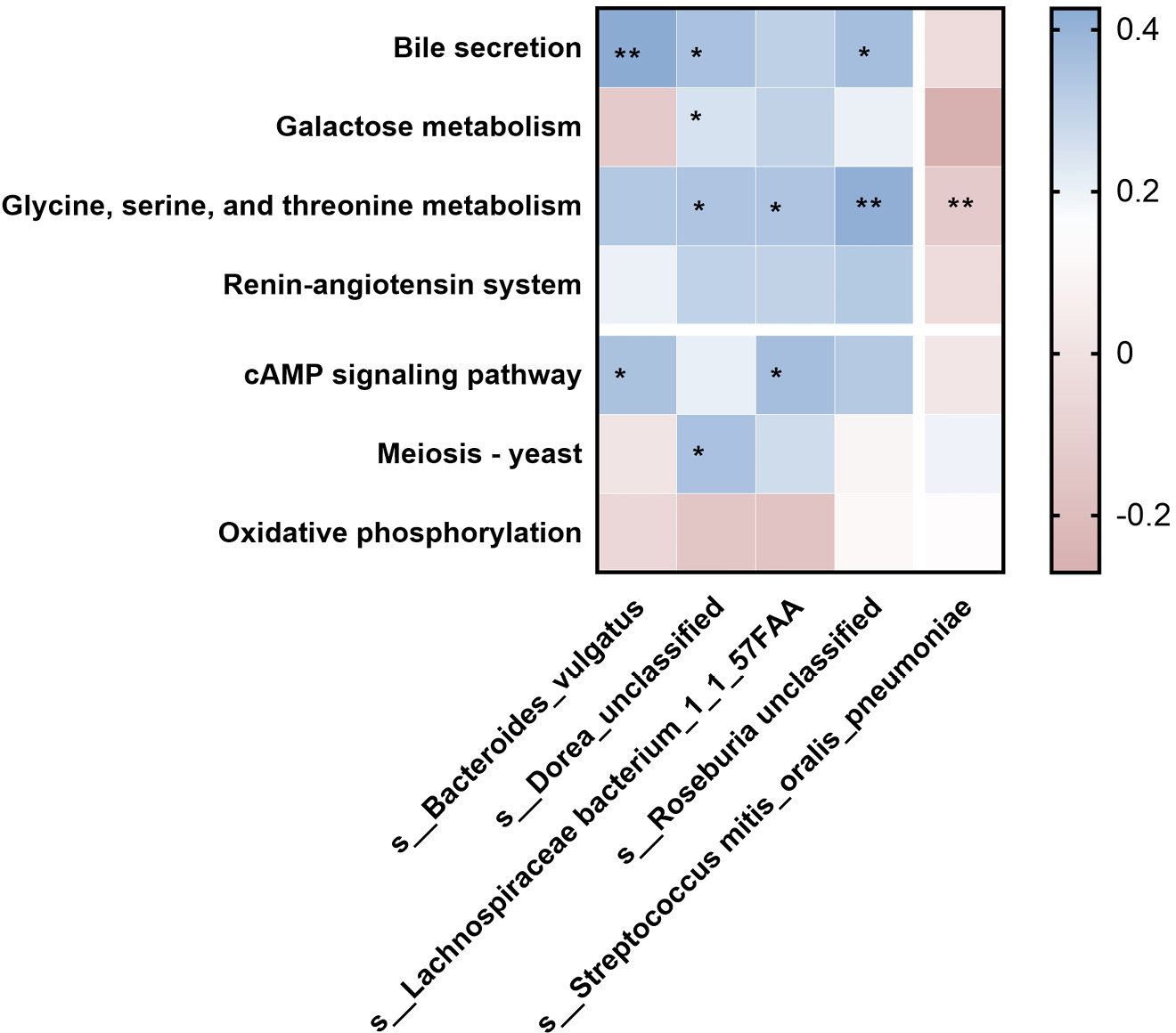 Correlation between the blood metabolome and intestinal microbiota 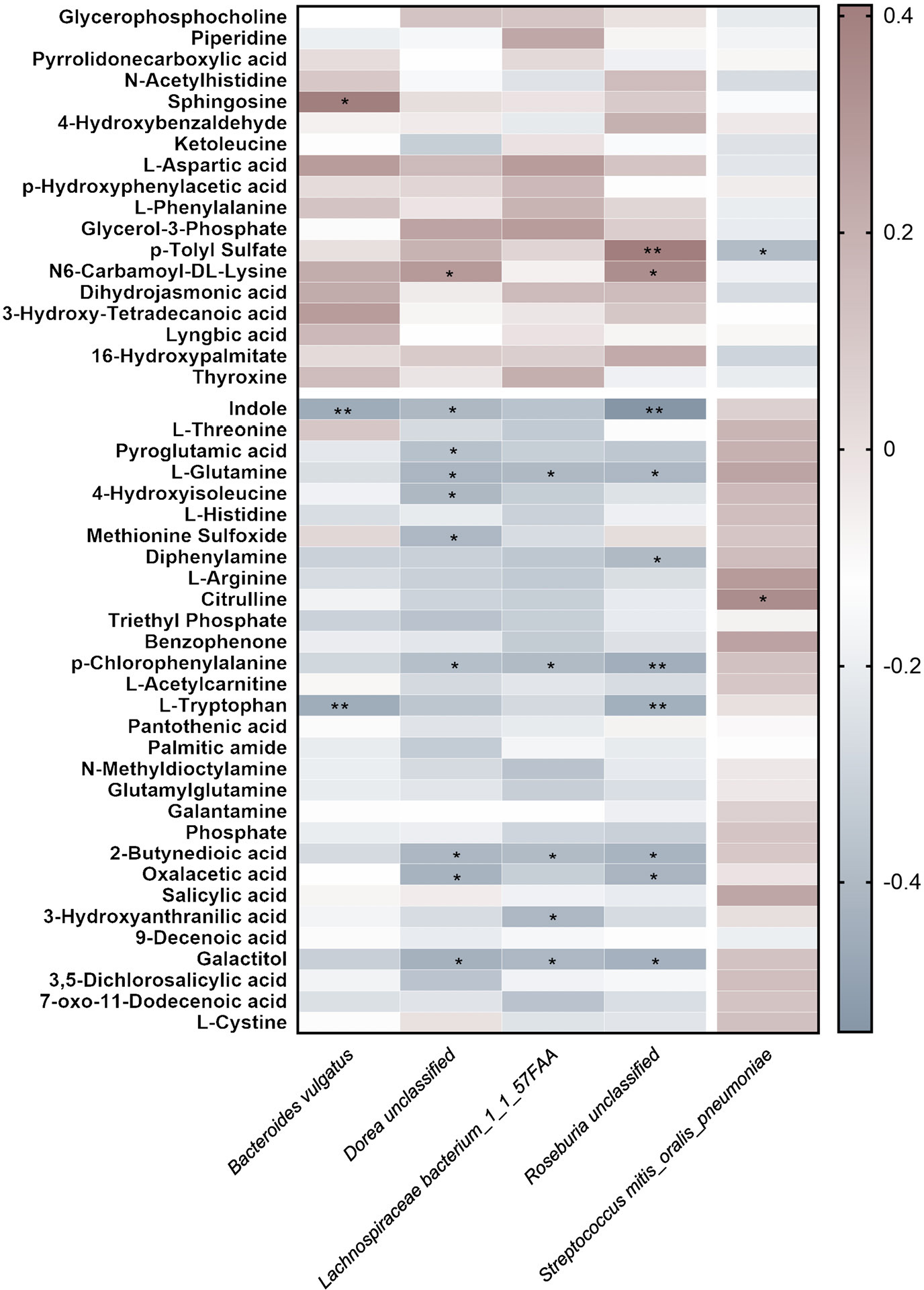 Correlation between the fecal metabolome and gut microbiota 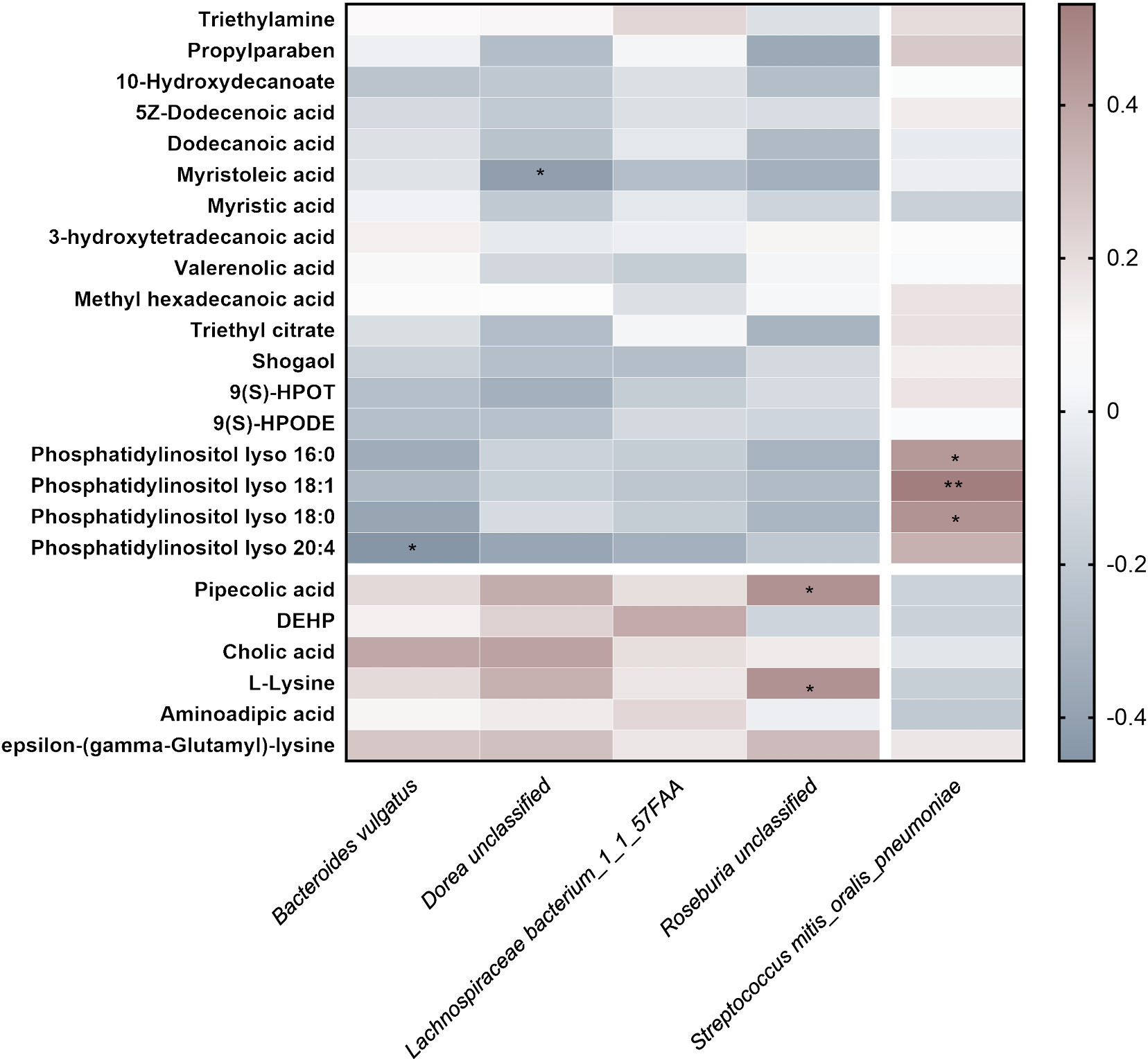 This study aimed to identify potential biomarkers for distinguishing infants with EUGR from infants without EUGR through gut microbiotas and metabolites. Here, we observed four lower-gut microbial species, B. vulgatus (13-15), D. unclassified, R. unclassified, and L. bacterium 1_1_57FAA, in the intestinal microbiotas of infants with EUGR compared with those of infants without EUGR. Although the functions of these species have not been well characterized, our results suggest that these species are relevant to the EUGR problem. Meanwhile, we observed that S. mitis_oralis_pneumoniae (16), which are regarded as common human pathogens, were higher in the gut microbiota of the EUGR group than in that of the non-EUGR group. Taken together, our results suggest a specific intestinal microenvironment of infants with EUGR.

As a metabolic organ, it is possible for different intestinal microbiotas to contribute to different metabolites in hosts, and vice versa. Our results exhibit that the different microbial species were correlated with KEGG metabolic pathways. Thus, it was reasonable to find that the different intestinal microbial species were associated with different metabolites. Our study demonstrated significantly higher levels of several individual amino acids and organic acids in the blood of the EUGR group than in that of the non-EUGR group. Specifically, the higher blood level of L-tryptophan was positively correlated with B. vulgatus and R. unclassified. Meanwhile, the higher blood level of indole was positively correlated with B. vulgatus, D. unclassified, and R. unclassified. Tryptophan is an essential amino acid obtained from the daily diet, and it participates in several metabolic pathways. It has been reported to modulate the gut microbiota and, thus, protect the gut barrier. However, only 4–6% of the total tryptophan can be metabolized by the gut microbiota and generate indole, which may be toxic to the hosts (17). We observed a high level of indole in blood of the EUGR group, which indicates a dysfunction of the gut barrier and a leakage of harmful substances into the blood. In conclusion, B. vulgatus, D. unclassified, and R. unclassified may play a possible protective role in gut homeostasis, which is probably involved in the energy deficiency of infants with EUGR.

Furthermore, our results showed four individual species of lysophosphatidylinositol (LPI), which were significantly more abundant in the fecal samples from the EUGR group as compared with those from the non-EUGR group. Notably, phosphatidylinositol lyso 16:0, 18:1, and 18:0 were positively correlated with S. mitis_oralis_pneumoniae. Meanwhile, phosphatidylinositol lyso 20:4 was negatively correlated with B. vulgatus. An LPI is generated by the enzymatic activity of PLA2, which hydrolyzes glycerophospholipids and sphingolipids. Both plasma LPIs and serum LPIs have been reported to be associated with obesity, type 2 diabetes, and several types of cancer (18). So far, however, the roles of fecal LPIs have rarely been reported (19). Fecal LPIs could be probably derived from the undigested LPIs in food, which indicates lower efficiency of the digestive system in EUGR groups. Alternatively, fecal LPIs could be the intermediate metabolites in phospholipid homeostasis. Despite our inability to point out the roles of fecal LPIs in a physiological context, our results exhibit a correlation between fecal LPIs and different microbial species. In short, fecal LPIs could be represented as useful biomarkers for infants with EUGR.

In summary, as gut microbiota homeostasis exerts multiple beneficial effects on the microbiota-derived metabolites and energy uptake of humans, the dysregulation of infant gut microbiota may promote EUGR. Thus, it is crucial to identify the biomarkers of EUGR in infants. Ongoing research is needed to gain a better understanding of the mechanisms involved in the regulation of metabolites by EUGR-specific microbial species.

Reporting Checklist: The authors have completed the MDAR reporting checklist. Available at http://dx.doi.org/10.21037/tp-20-431

Conflicts of Interest: All authors have completed the ICMJE uniform disclosure form (available at http://dx.doi.org/10.21037/tp-20-431). The authors have no conflicts of interest to declare.

Ethical Statement: The authors are accountable for all aspects of the work in ensuring that questions related to the accuracy or integrity of any part of the work are appropriately investigated and resolved. The study was conducted in accordance with the Declaration of Helsinki (as revised in 2013). The study was approved by the Research Ethics Committee of Shanghai Jiao Tong University Affiliated Sixth People’s Hospital (2017-009) and informed consent was taken from all the patients.