Small for gestational age (SGA) status, which is defined as a birthweight < the 10th percentile, has long been considered a vital risk factor for neonatal mortality and morbidities among preterm infants (1,2). Increased risks of bronchopulmonary dysplasia (BPD) (3), late-onset sepsis (4), necrotizing enterocolitis (NEC) (5), retinopathy of prematurity (ROP) (6) and death (5) have been observed among SGA infants compared to non-SGA infants in previous studies. Therefore, SGA preterm infants require extra attention during their stay in neonatal intensive care units (NICUs). With the advancement of perinatal medicine, an increased number of preterm infants have survived in China (7). However, the rate of SGA and the risks of neonatal mortality and morbidities for SGA preterm infants in Chinese NICUs have been scarcely demonstrated.

This study aimed to estimate the rate and neonatal outcomes of SGA preterm infants in the largest contemporary multicenter cohort of preterm infants in China. We also evaluated the association of SGA status with neonatal outcomes in different GA and birth weight percentile groups, aiming to demonstrate whether the association existed among different GA groups and birth weight percentile groups.

The study was conducted in accordance with the Declaration of Helsinki (as revised in 2013). The study was approved by The Ethics Committee of the Children’s Hospital of Fudan University (Ethic approval No. [2015] 28) and informed consent was waived.

The inclusion criteria of this study were all infants born at 26+0 -33+6 weeks’ gestation and admitted to participating hospitals within 7 days after birth from May 1st, 2015 to April 30th, 2018. Stillborn infants and infants who died in the delivery room were not eligible. Infants who did not receive complete care and left the hospital against medical advice were all excluded. Infants were followed until death or discharge from the NICU.

Twenty-five tertiary hospitals from 19 provinces in China participated in this study. All hospitals were able to provide comprehensive care for infants born <28 weeks of gestation or weighing <1,000 grams at birth. Among the participating hospitals, 17 were national or provincial neonatal referral centers, 8 were regional referral centers in metropolitan cities, 18 were perinatal centers, and 7 were specialized children's hospitals. Twelve hospitals were located in eastern region of China, nine hospitals in central region and the other four in western China (7).

SGA status was defined as a birthweight < the 10th percentile for gestational age according to the Chinese neonatal birth weight curve for gestational age published in 2015 (9). Gestational age (GA) was determined using the hierarchy of best obstetric estimate based on the prenatal ultrasound, menstrual history, obstetric examination, or all three. Antenatal corticosteroid therapy was defined as intravenous glucocorticoid treatment in one or more doses before delivery. The Transport Risk Index of Physiologic Stability (TRIPS) score was used as an illness severity score on NICU admission (10).

The primary outcomes were neonatal mortality and any major morbidity, including BPD, intraventricular hemorrhage (IVH) ≥ grade III or periventricular leukomalacia (PVL), NEC, ROP and sepsis. BPD was defined as the need for mechanical ventilation or oxygen dependency at 36 weeks of postmenstrual age or at discharge (11). NEC was defined as ≥ stage 2 according to the Bell criteria (12,13). Sepsis was defined by a positive blood or cerebral spinal fluid culture. Cultures that were positive for coagulase-negative staphylococcus (CONS) were considered as definite or possible infection if the infants fulfilled all three criteria below: (I) infection-related clinical manifestations; (II) two positive cultures drawn within two days of each other, or one positive blood culture together with abnormal white blood cell count (<5×106/L or >20×106/L), C-reactive protein level (≥8 mg/L), or procalcitonin level (>0.5 ng/mL) within two days (14) susceptible antibiotics were given or planned ≥5 days (15). IVH was classified according to Papile criteria (16). PVL was defined as the presence of periventricular cysts on cranial ultrasound or cranial MRI scans before discharge. ROP was diagnosed according to the International Classification of ROP (17).

Student’s t-tests and Pearson χ2 tests were used to compare the distributions of continuous variables and categorical variables between the SGA and non-SGA groups, respectively. Multilevel mixed-effects logistic regression models were used to examine the association between SGA and neonatal outcomes, accounting for the intracluster correlation among the infants within hospitals. Hospitals were considered independent clusters with random effects in the models. At the infant level, gestational age, sex, Apgar scores <3 at 1 and 5 minutes, congenital abnormalities, TRIPS score on admission, cesarean status, inborn status, primigravida, prenatal care, maternal hypertension, maternal diabetes, and antenatal steroids were adjustment factors. Same analyses were performed for infants with different GAs and with birth weights < the 3rd percentile and within the 3rd–10th percentiles. In all analyses, a two-sided P<0.05 was used to determine statistical significance. Statistical analysis was performed using Stata 15.1 (StataCorp, College Station, TX). 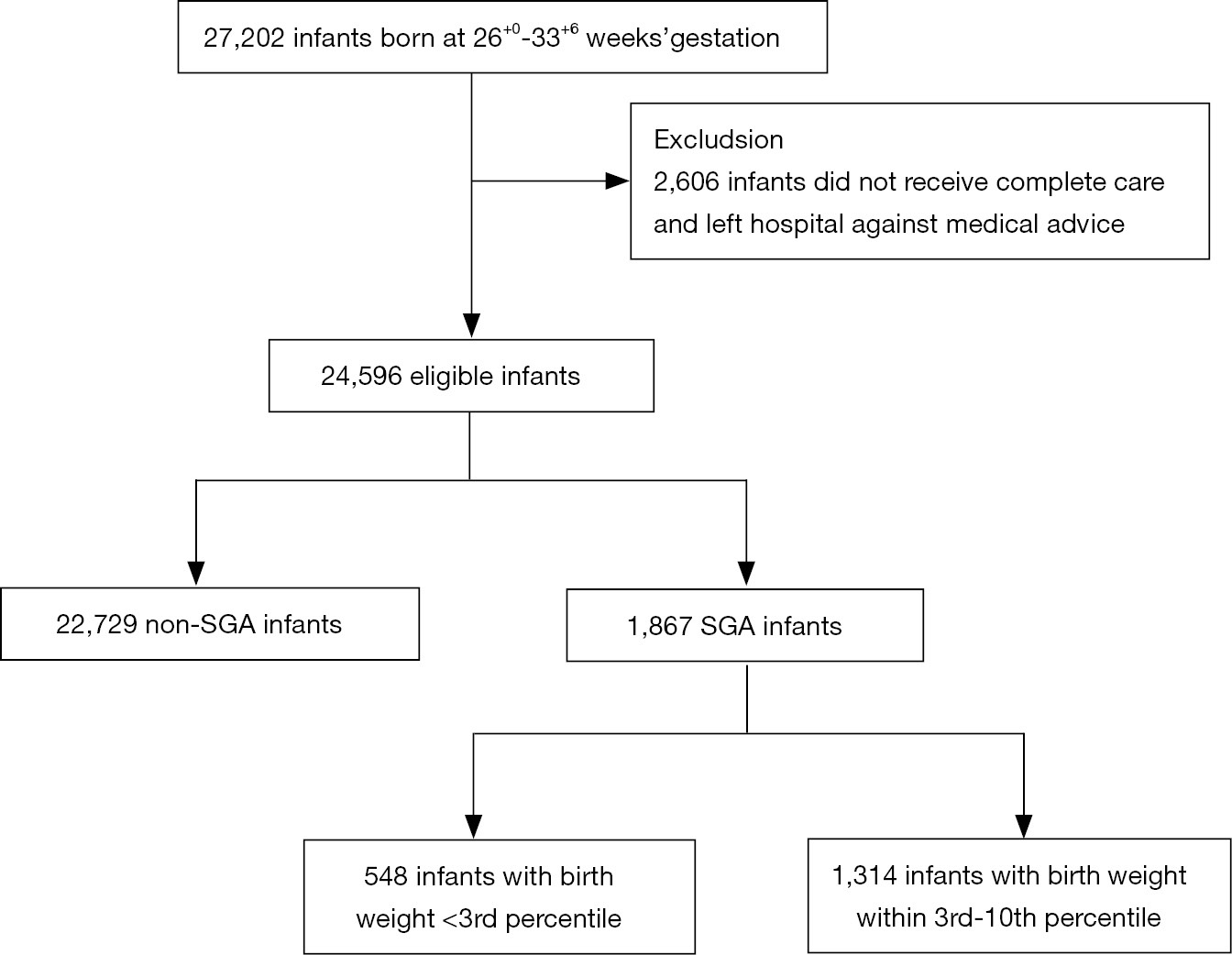 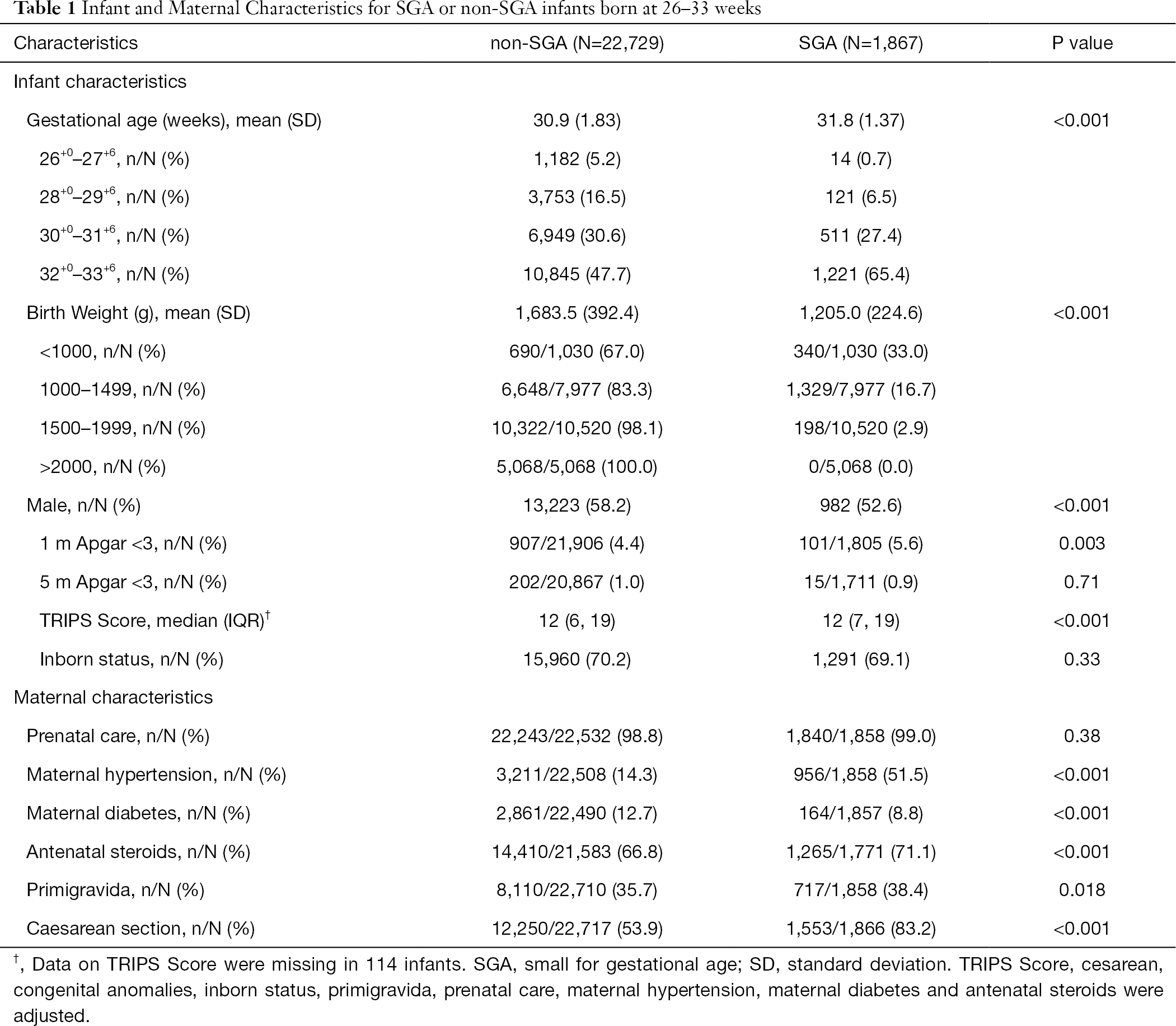 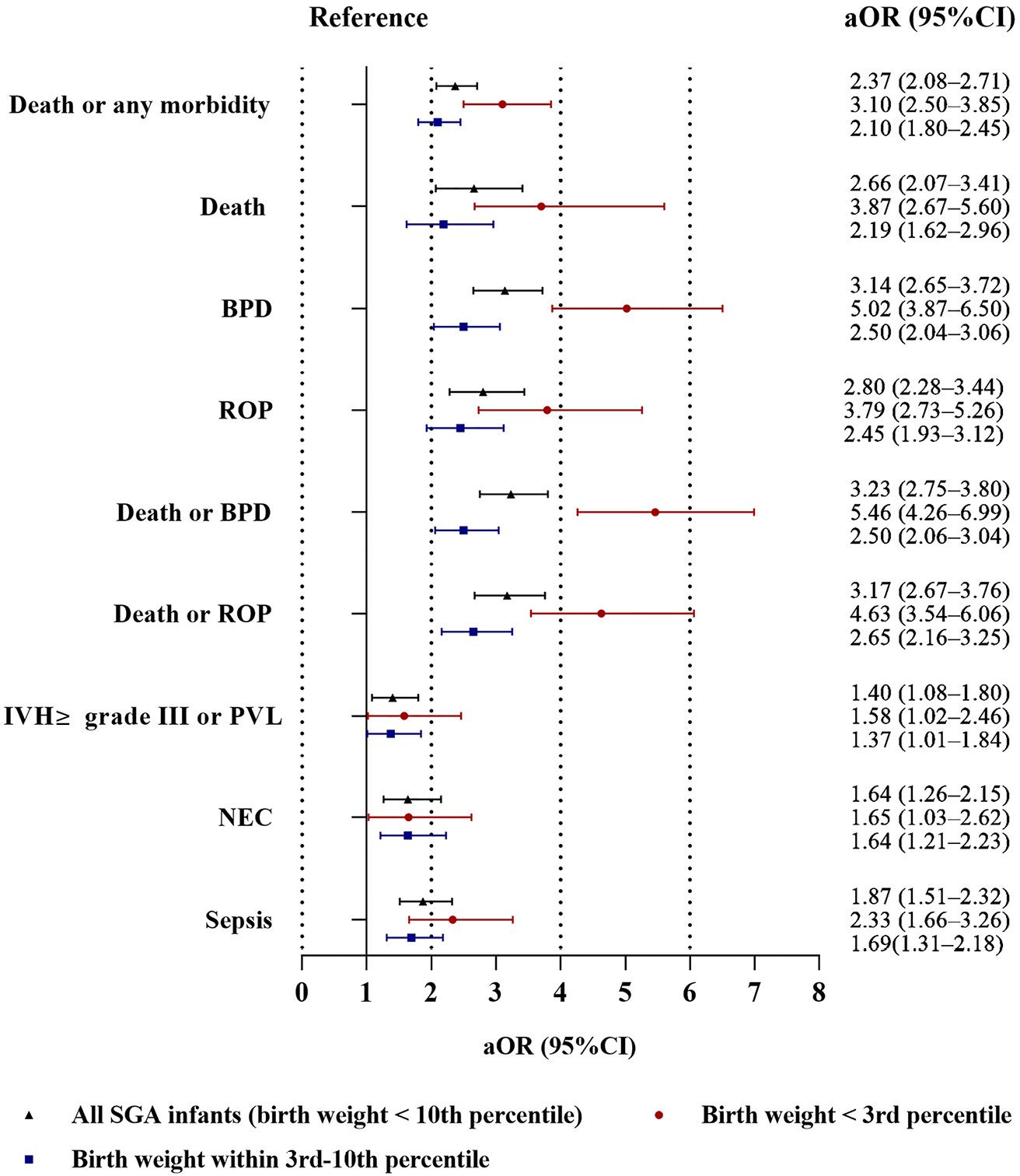 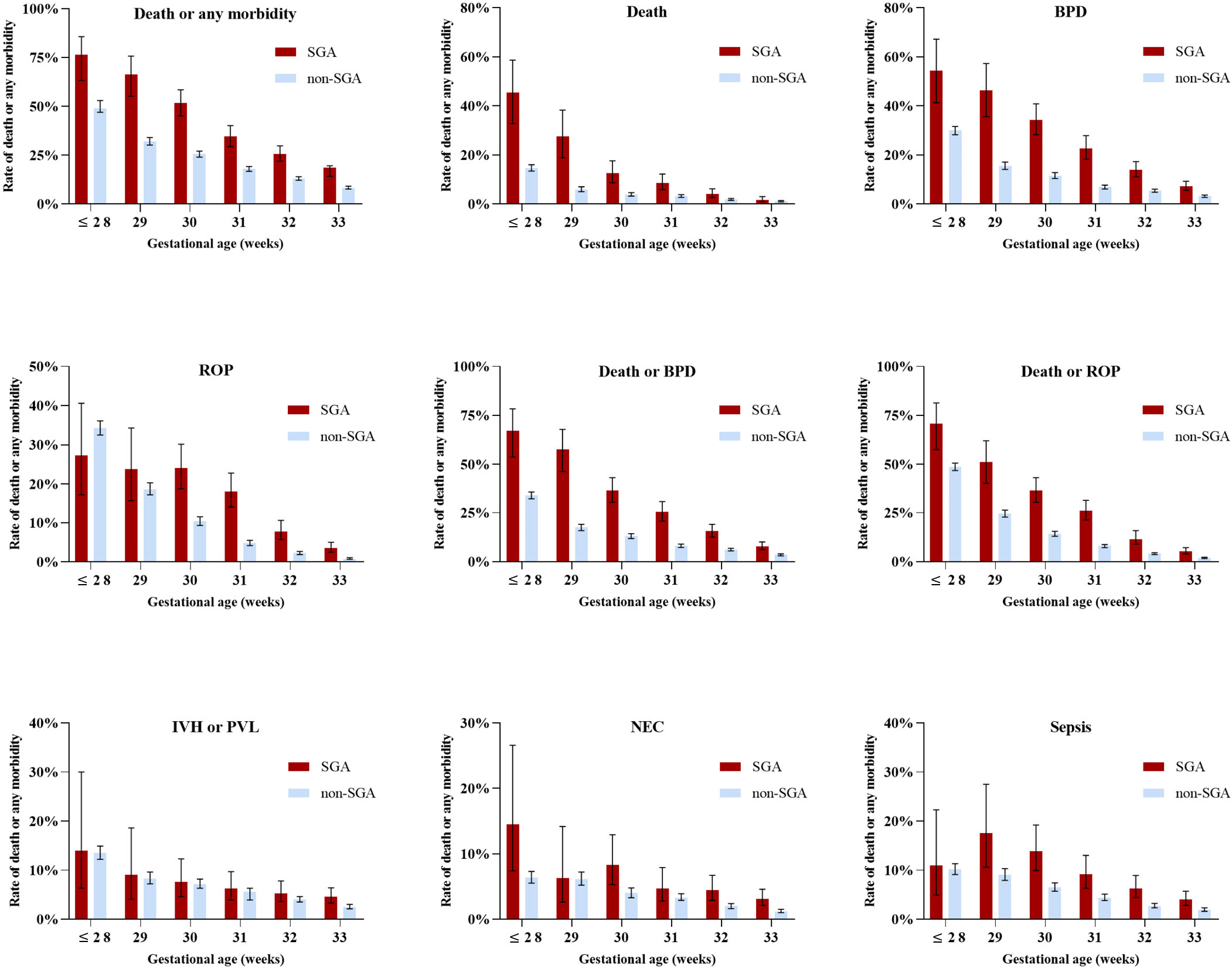 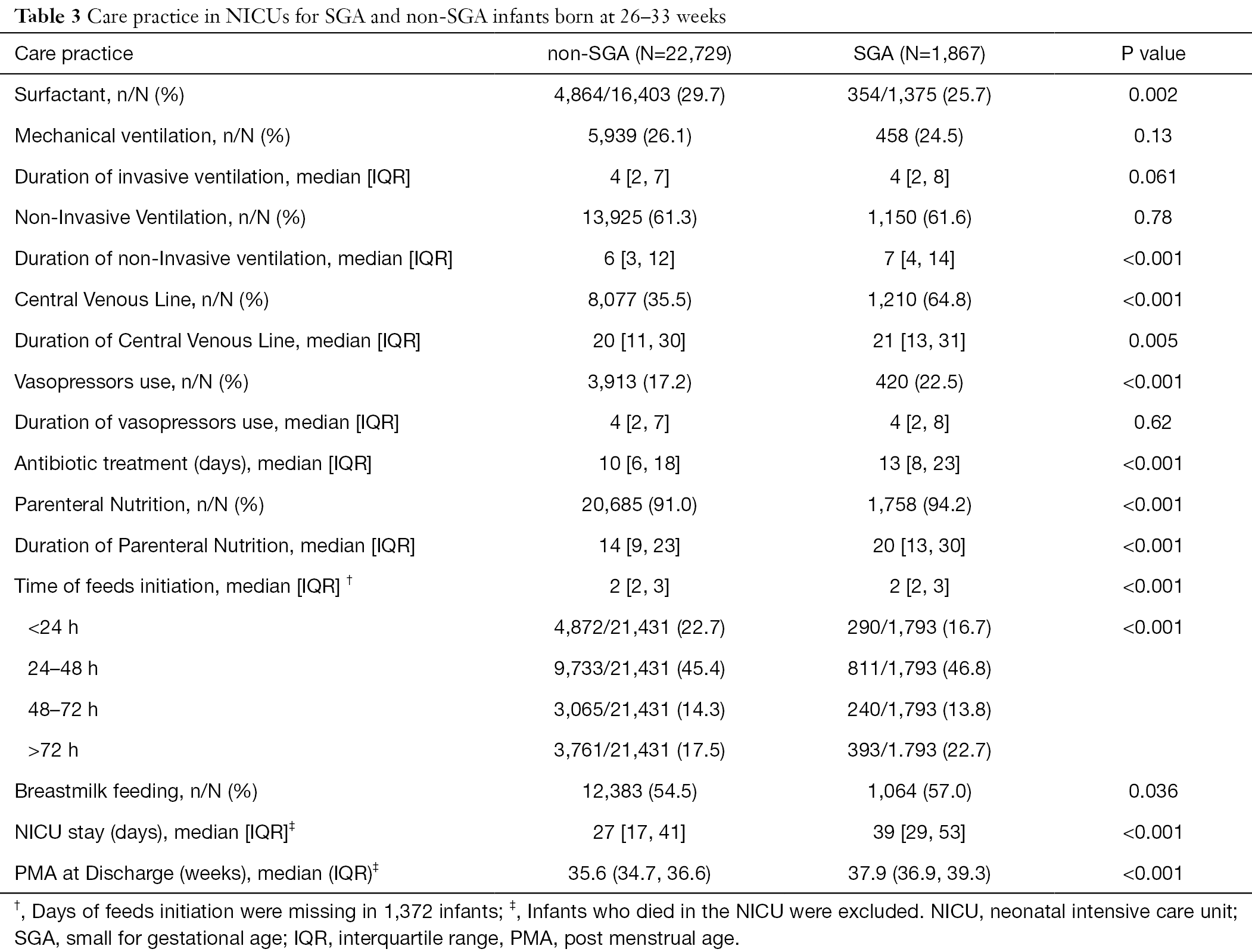 Among 24,596 infants born at 26–33 weeks’ gestation and admitted to Chinese NICUs, 1,867 (7.6%) were classified as SGA. This SGA rate for preterm infants was lower than that reported previously, which varied from 9.95% to 37.5% in developed countries including the US (5), Canada (18), Sweden (19), Italy (20) and Germany (21). In addition, the SGA rate was also lower than we expected, that the rate might be approximately 10% based on the definition of SGA. We suspected that this relatively low SGA rate was because our study was hospital-based instead of birth-population-based. For infants >32 weeks of gestation, those in good condition would not be admitted to tertiary NICUs. However, more importantly, we observed a decreased proportion of SGA infants with decreasing GA, and specifically, only 3.1% of infants born at 28–29 weeks gestation and 1.2% of infants born at 26–27 weeks’ gestation were SGA. This result indicated that many SGA infants at the youngest GA or with highest illness severity might die in the delivery room or receive palliative care without NICU admission. More investigations are needed for the exact reasons and to facilitate possible quality improvement initiatives.

It was observed that the risk of ROP was significantly increased for SGA infants ≥30 weeks gestation. As mentioned above, SGA infants were at higher risk of respiratory disorders and thus were associated with a higher rate and longer duration of oxygen supplementation, which was a significant risk factor for ROP development (26). A systematic review included 21 studies and evaluated the association between ROP and SGA in preterm infants. The results reported increased ROP odds for SGA infants among all preterm infants (6). The small sample size of infants with the youngest gestational age have limited our power to detect differences in ROP incidence among infants ≤29 weeks’ gestation. Furthermore, 35% of SGA infants with a GA ≤29 weeks died, and these deaths may have occurred before ROP could develop. Our results indicated that SGA preterm infants, even among those with relatively larger GAs, should be more closely monitored for ROP. In light of the increased risks of BPD and ROP among SGA infants, it might worth to evaluate the effects of relevant care practices, such as saturation targets, specifically in the SGA preterm population to guide more precise care for these infants.

The association between SGA and sepsis was also demonstrated in our study and previous reports (4,29). The potential mechanism may be associated with the immaturity of SGA preterm infants, longer stay in the NICU and more invasive care practices, leading to a higher probability of infection.

In this study, we elaborated on the rates and risks of neonatal outcomes for SGA preterm infants based on the largest contemporary cohort of preterm infants in China, thus providing useful references for neonatologists. There were also several limitations. First, this was a hospital-based study, and the proportion of SGA preterm infants could not represent the incidence of SGA status in the population. There might be a considerable proportion of SGA infants with the lowest gestational age did not receive active care and were not admitted to NICUs. Second, although the database provided detailed definitions, we were unable to evaluate potential diagnostic variabilities across sites (e.g., differences in timing and diagnostic criteria of cranial ultrasounds or ophthalmologic examinations). Third, the sample size of infants born <28 gestational weeks was relatively small and did not have enough statistical power. Fourth, there was no information on the causes of SGA status in our study, and these causes may be closely associated with neonatal outcomes. Fifth, 2,606 infants were excluded in our analysis due to incomplete care (discharge against medical advice) and unpredictable outcomes. Among these infants, 11.0% (287/2,606) were SGA and therefore the incidence of SGA presented in our study was mildly underestimated.

In conclusion, 7.6% of infants born at 26–33 weeks and admitted to Chinese NICUs were SGA. SGA is significantly associated with adverse neonatal outcomes across GA groups. Specific attention for SGA preterm infants in NICUs and better perinatal monitoring and management to reduce the SGA rate are both required.

We would like to thank American Journal Expert for its help in polishing the language of our paper.

Funding: This study was funded by the China Medical Board (Grant Number 14-194 [to YC]) and the Canadian Institutes of Health Research (Grant Number CTP 87518 [to SKL]).

Reporting Checklist: The authors have completed the STROBE reporting checklist. Available at http://dx.doi.org/10.21037/tp-20-339

Conflicts of Interest: All authors have completed the ICMJE uniform disclosure form(Available at http://dx.doi.org/10.21037/tp-20-339). The authors have no conflicts of interest to declare.

Ethical Statement: The authors are accountable for all aspects of the work in ensuring that questions related to the accuracy or integrity of any part of the work are appropriately investigated and resolved. The study was conducted in accordance with the Declaration of Helsinki (as revised in 2013). The study was approved by The Ethics Committee of the Children’s Hospital of Fudan University (Ethic approval No. [2015] 28) and informed consent was waived.