Idiopathic central precocious puberty (ICPP) refers to the secondary sexual characteristics and rapid genital development of children (girls: before 8 years old; boy: before 9 years old) (1). The earliest clinical manifestation in girls is usually breast development (thelarche), followed by pubic hair (pub-arche), and then menarche. In boys, the initial clinical sign is testicular enlargement (2). If children with small for gestational age (SGA) cannot recover on their own, they should be treated with growth hormone. In ICPP, puberty is advanced and the increase of sex hormone levels can lead to accelerated maturation and early closure of the epiphysis and the space and time for growth are greatly reduced, thus, affecting the adult height of the child and causing social-psychological problems (3). Previous studies reported that SGA maybe a risk factor for ICPP (4,5). It is reported that baby girl, passive smoking, peanut oil consumption and unsalted taste were risk factors for SGA, while folic acid supplementation was protective factor (6). Compared with appropriate for gestational age (AGA) girls, the age of ICPP in SGA is earlier and progresses faster, thus, SGA is at a higher risk of being below the target height. It has been reported that SGA girls gain weight rapidly during early childhood, but maybe have an increased risk of metabolic syndrome in adults (7). A recent study in South Korea showed that compared with AGA girls, SGA girls with precocious puberty have increased bone age and earlier menarche. However, no difference was found in FAH after treatment between these groups (8). Moreover, this article did not compare the metabolism of glucose and lipid between the two groups of children. Previous studies found that girls and adolescents born with SGA maybe suffer from metabolic syndrome (9,10). However, it is still unclear whether SGA adult metabolic syndrome is related to the occurrence of ICPP in childhood.

This study compared the growth and development indicators and glucose and lipid metabolism of SGA and AGA girls in the ICPP and explored the effects of SGA on the growth and development of girls, whether SGA girls have abnormalities in glycolipid metabolism when CPP occurs and whether it is related to adulthood metabolic syndrome in SGA, in order to prevent and treat the related diseases at an early stage.

In this retrospective study, girls with ICPP in the Tongji Hospital of Tongji Medical College of Huazhong University of Science and Technology from January 2012 to December 2018 were recruited. The percentile of birth weight of infants was based on the curve of birth weight of newborns of different gestational ages in China, formulated in 2015 (11).

This study was conducted in accordance with the declaration of Helsinki (as was revised in 2013). This study had been approved by the Ethics Committee of Tongji Hospital of Tongji Medical College of Huazhong University of Science and Technology (No. TJ-IRB20191011). All participants had signed the informed consent. Written informed consent was obtained from the guardians of the participants.

All girls underwent a physical development evaluation: height and weight were measured, body mass index (BMI) was calculated, and breast and pubic hair staging were determined by a physical examination. X-ray examination was used to evaluate the bone age. Pelvic B ultrasound examination of uterus and ovary development; MRI was used to exclude intracranial tumor and other organic lesions. Thyrotropin, free thyroxine, testosterone (T), estradiol (E2), 17-hydroxyprogesterone, dehydroepiandrosterone sulfate (DHEAS), and adrenocorticotropin (ACTH) were determined by immunochemiluminometric assays (ICMAS) to exclude hypothyroidism, gonadal tumor, and congenital adrenocortical hyperplasia and tumor indicators were tested and venous blood was extracted after fasting in the morning from 8:00 to 10:00 after resting for 30 minutes.

GnRH stimulation test (4): intravenous injection of GnRH, 2.5 µg/kg (maximum dose 100 µg); the level of follicle stimulating hormone (FSH) and luteinizing hormone (LH) were measured by ICMAS before the injection (baseline value) and 30, 60, 90, and 120 minutes after the injection. HPGA function starts, peak LH >5.0 µ/L and peak LH /FSH >0.6. Accelerated linear growth: annual growth rate is higher than normal. Gonadal development: pelvic b-ultrasound showed enlargement of the uterus and ovary and multiple follicles with a diameter of >4 mm could be seen in the ovary.

SPSS 20.0 was used to analyze the data. Continuous data were expressed as mean± SD. T-test was used for comparison between groups. The non-normally distributed continuous data were compared by non-parametric test. P<0.05 was considered statistically significant.

General information about the girls 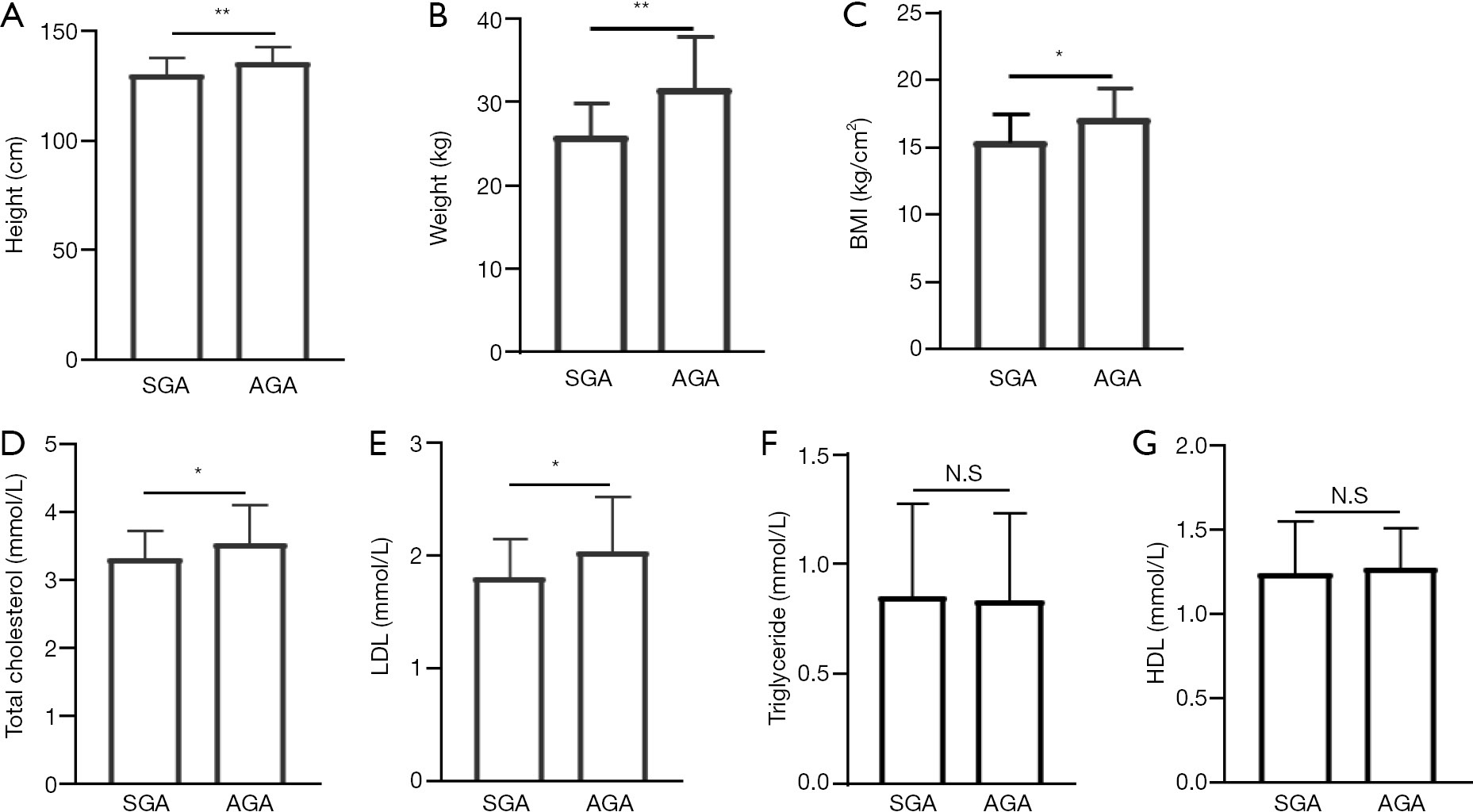 The level of LH/FSH, estradiol, testosterone, DHEAS and androstenedione had no significant difference between the SGA group and AGA group (P>0.05; Table 1).

The fasting blood glucose, insulin level, and homeostasis model assessment of insulin resistance (HOMA-IR) had no significant difference between the SGA group and AGA group (P>0.05). Blood glucose and insulin levels in the two groups were within the normal range (Table 2). 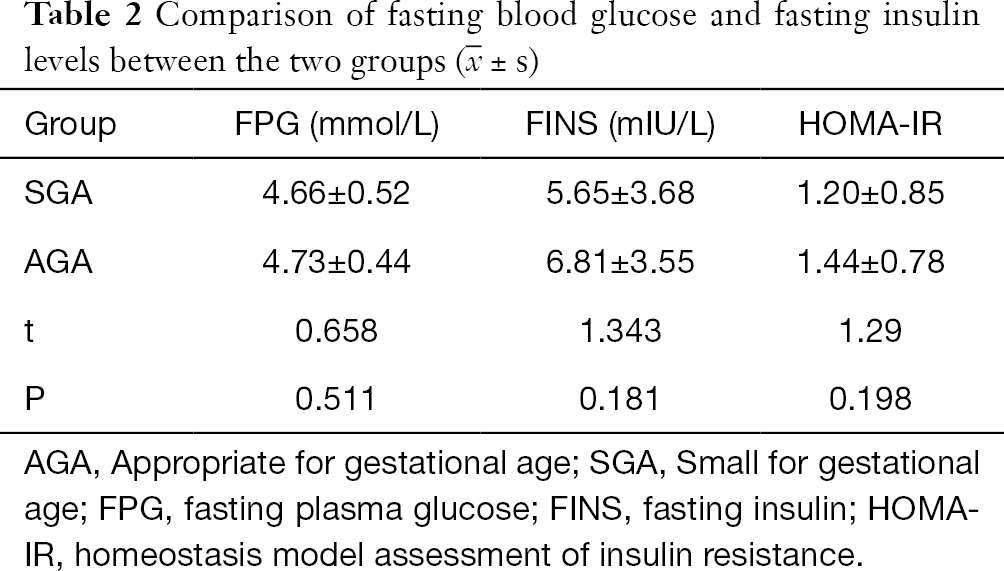 SGA girls were 5–7 times more likely to have a shorter stature than AGA girls (12-14). Similar studies have reported that the adult height of SGA girls is 1SD lower than that of AGA girls and most of this difference has been reflected before puberty (15). However, in addition to the gaps at birth and the extent of childhood catch-up, adolescent development is also an important factor affecting the height of SGA girls. Short SGA girls not only gain less height before puberty but also gain less height during puberty (16). Although the accelerated bone age of SGA girls with ICPP occurs earlier, the height and age at the onset of puberty were important for the final height (17). The results of our study presented that the height of SGA girls was lower than AGA girls.

Studies have shown that BMI of SGA may be lower than that of AGA and lower BMI is suitable for SGA growth (18). As a result, the management guidelines have been changed all over the world. SGA girls and AGA girls have different growth patterns during the ICPP period. SGA girls' bone maturation is accelerated and the peak bone growth rate occurs in early adolescence and those whose epiphyseal line closes at an accelerated rate (19). The duration of adolescent development of SGA girls is short and the height increase in the adolescent development period is smaller than expected. Therefore, SGA girls are at a higher risk of being shorter than their target height when the height of the baseline is lower, the growth space is smaller, and the growth time is shorter in the SGA group. During puberty, sex hormone and adrenal hormone levels are often higher than they were before puberty. Our study found no difference in these hormone levels between SGA and AGA in children with CPP. This may be related to the fact that all the selected cases were CPP.

In our study, the fasting blood glucose, triglyceride, HOMA-IR and HDL were similar between the two groups; LDL was lower than the SGA group but both are within the normal range. By analyzing the reasons for the differences with the above studies, it was found that all the subjects in the abovementioned study were obese girls. The height and BMI of SGA girls were lower than AGA girls which suggested that there was no difference in glycolipid metabolism between the two groups possibly because SGA girls did not achieve catch-up. In addition, the small sample size of the SGA group may also be a contributing factor. In a previous prospective case-control study, individuals with SGA at birth have greater insulin resistance and higher prevalence of metabolic syndrome than individuals born with AGA at birth. It indicates that insulin resistance can be extended to middle age in individuals with SGA (25,26). In the SGA group, there may still be catch-up in the subsequent growth and development, with continued accumulation of adipose tissue and the transition from insulin sensitivity to insulin resistance, which may have an impact on the metabolism of blood glucose and blood lipid and, thus, develop into metabolic syndrome. However, we did not find any evidence of abnormal glucose and lipid metabolism in the SGA girls at a mean age of age 8.3, it is possible these findings would emerge as the girls progress through puberty.

Limitations. Firstly, this study was a retrospective study and not a randomized controlled trial. Secondly, this study was a single-center trial and the sample size was limited. Another multiple center trial with large sample size was needed in the future. Thirdly, the clinical follow-up was short, the state of growth and development, level of blood glucose, and lipid metabolism should be observed with a longer follow-up. Fourthly, in the SGA group, there were only 18 participants were included in our study. Because, due to the limited sample size, only 18 cases with SGA were included in this study. Another reason maybe due to the low incidence rate of SGA girls with central precocious puberty (CPP) in our country. Another large trial with more participants was still need in the future. Fifthly, the effectiveness of length or weight-for-length on the metabolic status remained unknown and should be further researched. Sixthly, variations between clinical decision makers, ultrasound and X-ray examiners cannot be standardized that may influenced the evaluation. Seventhly, there were no data about the height and weight of their parents which should be further researched.

In conclusion, the height, weight, BMI, serum cholesterol and LDL of girls in SGA with CPP were significantly lower than that of those girls born AGA. Therefore, it is important to pay close attention to the growth and metabolic markers in SGA girls in spite of the normal blood glucose and lipid metabolism level in this study. Because, these indicators may contribute to early diagnosis of SGA girls with CPP.

We would like to thank Berwick DM for his help in polishing our paper.

Reporting Checklist: The authors have completed the STROBE reporting checklist. Available at: http://dx.doi.org/10.21037/tp-20-366

Conflicts of Interest: All authors have completed the ICMJE uniform disclosure form (available at: http://dx.doi.org/10.21037/tp-20-366). The authors have no conflicts of interest to declare.

Ethical Statement: The authors are accountable for all aspects of the work in ensuring that questions related to the accuracy or integrity of any part of the work are appropriately investigated and resolved. This study was conducted in accordance with the declaration of Helsinki (as was revised in 2013). This study was conducted with approval from the Ethics Committee of Tongji Hospital, Tongji Medical College, Huazhong University of Science and Technology (No. TJ-IRB20191011). All participants had signed the informed consent. Written informed consent was obtained from the guardians of the participants.