Medulloepithelioma is a rare highly malignant embryonic tumor that originates from primitive pluripotent and neural tube-specific pluripotent stem cells. The peak incidence is between 6 months and 5 years of age (1,2). In 2016, the World Health Organization proposed a new classification for tumors of the central nervous system, and the term “primitive neuroectodermal tumors” has been removed from the dictionary. However, the names of some rare solid tumors are reserved, such as medulloepithelioma. The histological features of medulloepithelioma are the papillary, tubular, or trabecular arrangement of the tumor neuroepithelium, which mimics the embryonic neural tube (3). Medulloepithelioma that occurs in the orbit usually shows a benign clinical course after simple resection, but the prognosis of medulloepithelioma that occurs in the intracranial area is poor, especially when the tumor is not completely removed (4). In this study, we report a 4-year-old child who was diagnosed with choroid plexus papilloma based on the initial head magnetic resonance imaging (MRI) results. The postoperative pathological results confirmed that he had medulloepithelioma. The study of this case will help us to improve our understanding of the diagnosis of medulloepithelioma.

We present the following case in accordance with the CARE reporting checklist (available at http://dx.doi.org/10.21037/tp-20-257).

A 4-year-old boy was admitted to the pediatrics department of our hospital due to vomiting for 1 week. On physical examination, the child had an enlarged head circumference (53 cm), and the rest were normal. Laboratory examination showed no abnormalities. Subsequently, the child suddenly twitched his limbs with eyes wide open and teeth clenched. A computed tomography (CT) scan of the head showed signs of brain tumors and hydrocephalus. After being transferred to our department, the brain MRI scan sequence showed some cystic heterogeneous masses in the left lateral ventricle and hydrocephalus formation. The enhanced sequence showed the following: the coronal and sagittal images exhibit increased heterogeneity of the mass after the administration of a contrast agent, the enhanced separation is obvious, and “honeycomb-like” changes can be seen locally. The initial MRI diagnosis was choroid plexus papilloma in the triangle of the left lateral ventricle and hydrocephalus (Figure 1). 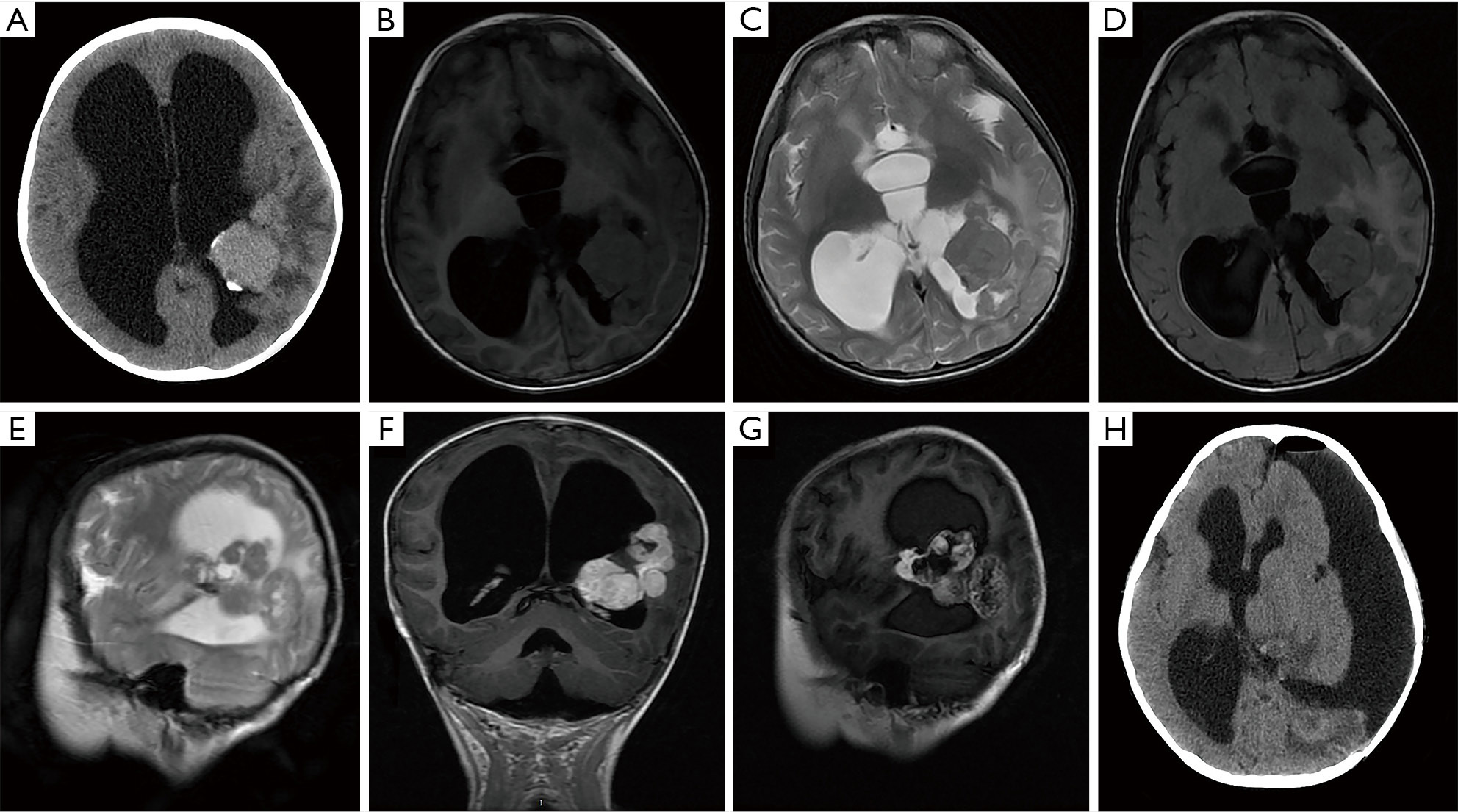 After explaining the condition and treatment plan to the child’s parents, a craniotomy was performed. During the operation, the tumor was irregular in shape, light gray, soft, and cystic. The tumor had a clear boundary from the surrounding brain tissue and was completely removed. The pathological results of rapid freezing during the operation were as follows: tend to medulloblastoma or primitive neuroectodermal tumor. The postoperative CT of the skull showed that the tumor had been completely removed. The histopathological results of the child later showed brain embryonic tumor – medulloepithelioma (WHO grade IV). Later, we found no shed tumor cells in the cerebrospinal fluid. The child’s vomiting condition eased in the following days. However, the hydrocephalus in the brain was not relieved, and we inserted a ventricular–abdominal shunt on the child. Later, the parents of the child refused chemotherapy or radiation therapy. Unfortunately, he was lost to follow-up after 2 months. 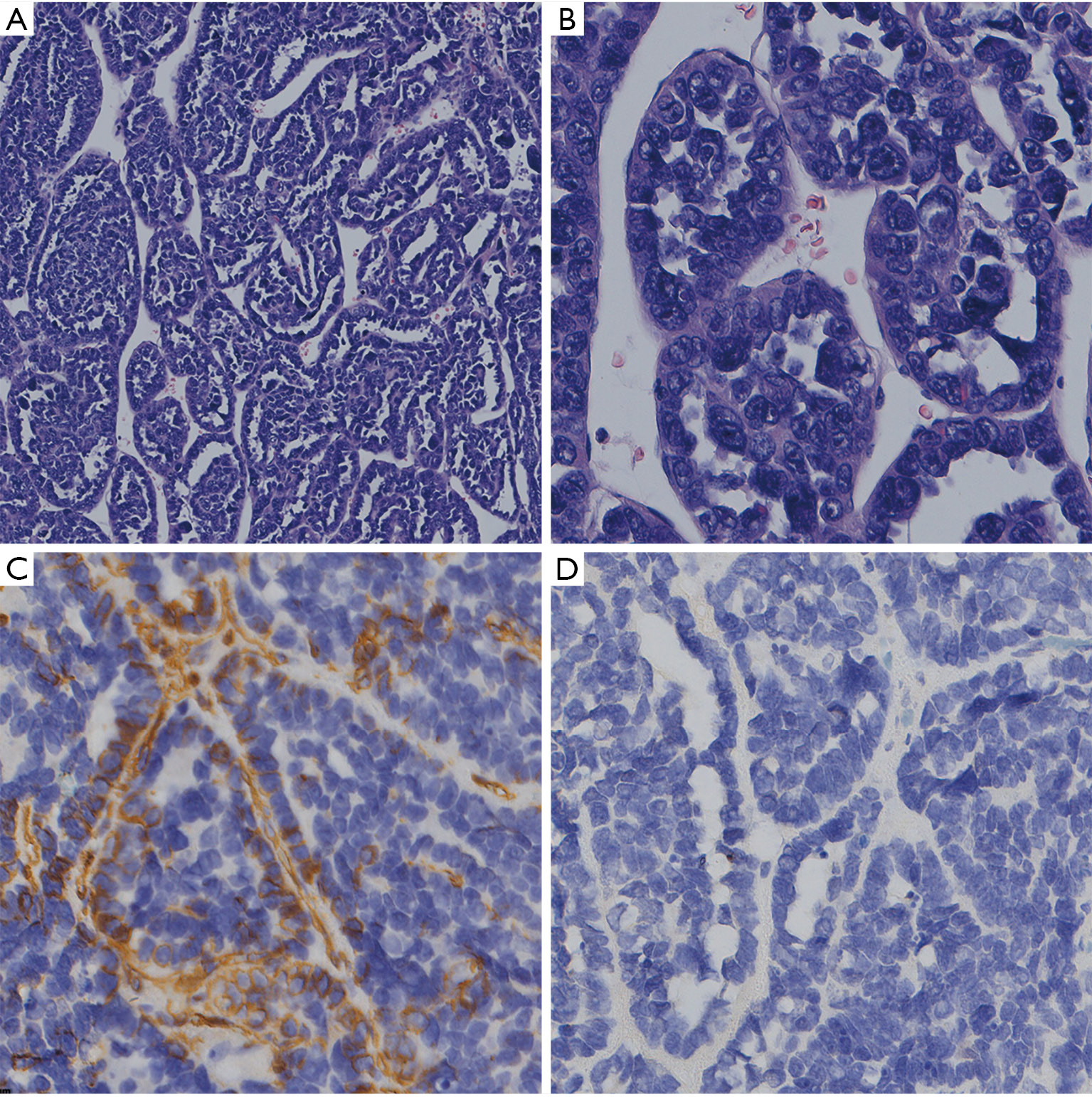 All procedures performed in studies involving human participants were in accordance with the ethical standards of the institutional and/or national research committee(s) and with the Helsinki Declaration (as revised in 2013). Written informed consent was obtained from the patient’s parents.

Histologically, tumor cells are arranged in tubules, trabeculae, or papillae. Compared with normal cells, tumor cells are larger, round, or polygonal, with less eosinophilic cytoplasm. The tumor cell nuclei are round or oval, with different sizes and deep staining, and the chromatin is granular, with more nucleoli, increased nuclear heterogeneity, and significantly reduced cytoplasm (2,6). Tumor cells may have multiple directions of differentiation, including mesenchymal cells, neurons, astrocytes, ependymal cells, or oligodendrocytes, which can be detected by immunohistochemistry. Tumors usually respond to synaptophysin and waveform protein, and glial fibrillary acidic protein or neuronal characteristic enolase is positively expressed (2,10). Due to the direction of mesenchymal differentiation, teratoma and medulloepithelioma may have histogenetic overlap. Therefore, the diagnostic markers of medulloepithelioma still need to be determined, and the diagnosis of medulloepithelioma depends largely on microscopic observation.

The radiological features of medulloepithelioma are obvious, but not specific. In CT scans, most medulloepitheliomas have low density or are isodense with clear borders (1). According to the typical MRI of this tumor described by Molloy et al., medulloepithelioma is isodense or has low density in T1-weighted imaging and has high density in T2-weighted imaging, and no enhancement occurs after the use of gadolinium-based contrast agents (11). However, recent studies have shown that more than 95% of medulloepithelioma exhibit increased density and contrast enhancement after the use of contrast agents, especially in the solid part of the tumor (1,12,13). In the present study, CT showed an isodense change, and the edges appeared to be significantly enhanced. On MRI, medulloepithelioma showed obvious heterogeneous enhancement and uneven distribution. This may be due to the appearance of cystic necrosis in the tumor, which leads to the destruction of the surrounding environment and blood vessels of the tumor and causes uneven local density enhancement.

The specific location in our case adds to the differential diagnosis of other tumors often seen in these locations. In this case, the preoperative MRI revealed an intraventricular tumor with similar characteristics: choroid plexus papilloma. The MRI features of choroid plexus papilloma are currently described as having isodensity or mild low density in T1-weighted imaging and heterogeneous and isodense lobular mulberry-like masses in T2-weighted imaging. After injection of gadolinium contrast agent, choroid plexus papilloma showed obvious uniform or uneven enhancement (14). In our case, these features are not different from the MRI findings. The only accurate way to confirm the diagnosis is through histopathological examination. Our pathology results are consistent with those of previous literature (7). The histological characteristics of choroid plexus papilloma are well-differentiated columnar epithelial cells and abundant inner capillaries and almost all positive staining for GFAP and CK7 (15). In this case, the tumor cells were observed under a light microscope in adenoid, papillary, cord-like, or nest-like arrangement. The cells were primitive in shape, with sparse cytoplasm, and a large number of pathological mitotic figures were easily seen. Various differentiated cells could be observed, including neurons and glial components. Therefore, we hypothesized that central nervous system tumors that occur in the lateral ventricles of infants and young children are accompanied by hydrocephalus. Especially when the head MRI shows choroid plexus papilloma, we should highly consider whether it is medulloepithelioma. Of course, the final diagnosis depends on observing the morphology of tumor cells under a light microscope after surgery.

At present, due to the rarity of medulloepithelioma, the best treatment option is currently unclear. The current general treatment plan for medulloepithelioma is to first undergo a gross total resection (GTR) and then to perform adjuvant radiotherapy and chemotherapy. Surgical resection is important for patients with intracranial hypertension and can provide treatment opportunities for adjuvant therapy. The degree of infiltration of tumor cells into normal brain tissues indicates that patients have a poor prognosis. The removal of tumor and infiltrating tissues around the tumor can be extended to 1 cm, which can improve the prognosis of patients (13). Therefore, intraoperative frozen section is very important to understand the degree of tumor invasion and determine the scope of tumor resection. The best radiotherapy plan includes 35 Gy for 21 days followed by 20 Gy for 12 days for the posterior fossa, primary tumor bed, and postoperative residual tumor. However, radiation therapy can cause cognitive and developmental disabilities in young children, so children under 3 years of age are not suitable for radiotherapy. Active chemotherapy and autologous bone marrow transplant may be a promising strategy. According to Hayase et al., a patient who underwent a total tumor resection without radiotherapy was treated with high-dose chemotherapy (HDCTX) and autologous peripheral blood stem cell transplantation (AuPBSCT) for at least 3 years, and the patient survived (16). According to Moftakhar et al., the characteristics of long-term survival (≥3 years) are as follows: tumor is located on the supratentorial region; cerebrospinal fluid specimens are negative for malignant cells; a GTR is obtained; after resection, patients receive aggressive chemotherapy and radiotherapy, regardless of age and gender (2,6). However, another literature review concluded that the position on the screen is not a favorable prognostic factor, and the age at first diagnosis is related to the improvement of patient prognosis (4).

The limitations of our case are that we lost the patient to follow-up only 2 months later, and we could not determine the prognosis of the child. We did not confirm whether the hTERT gene was expressed in our case.

For medulloepithelioma that occurs in the central nervous system, radiological examination is not sufficient to make a definite diagnosis of the tumor. Its diagnosis depends on histopathological examination results. Surgical resection is a safe and effective method that can prolong the life of patients. However, despite active adjuvant therapy, the prognosis of medulloepithelioma is still poor, and further research is needed to improve the diagnosis and treatment of this rare disease.

We thank Shinewrite () for its linguistic assistance during the preparation of this manuscript.

Reporting Checklist: The authors have completed the CARE reporting checklist. Available at http://dx.doi.org/10.21037/tp-20-257

Conflicts of Interest: All authors have completed the ICMJE uniform disclosure form (available at http://dx.doi.org/10.21037/tp-20-257). The authors have no conflicts of interest to declare.

Ethical Statement: The authors are accountable for all aspects of the work in ensuring that questions related to the accuracy or integrity of any part of the work are appropriately investigated and resolved. All procedures performed in studies involving human participants were in accordance with the ethical standards of the institutional and/or national research committee(s) and with the Helsinki Declaration (as revised in 2013). Written informed consent was obtained from the patient’s parents.