Acute bilirubin encephalopathy (ABE) is among the diseases that seriously endanger the development of nervous system for newborns (1). Its pathogenesis is mainly due to the deposition of bilirubin in the basal ganglia and its toxicity (2). Insufficient understanding of neonatal hyperbilirubinemia may lead to a missed opportunity of early diagnosis of ABE, which can cause severe neurological sequelae (1,3,4), such as abnormal hand and foot movement, auditory impairment, dental dysplasia and intellectual disability. Early detection and identification of bilirubin encephalopathy, and the timely prevention of irreversible brain damage plays a key role in the treatment. The diagnosis of ABE has remained controversial to date (1). At present, bilirubin-induced neurological dysfunction (BIND) scoring (5,6), cranial magnetic resonance imaging (MRI) (7) and auditory brainstem response (1,3,4) are the main methods for diagnosing ABE. However, they both have limitations in clinical application. The BIND score is highly subjective and requires long-term observation of patients (4). The high signal of T1 weighted image (T1WI) in the pallidal region is believed to be a hallmark of ABE (8). However, increased T1 signal in the pallidal region is also considered a transient phenomenon during the development of myelination, which lacks the specificity of diagnosis (9,10). Auditory brainstem response is also a well-known way of diagnosing ABE, but the relationship of serum bilirubin levels and auditory alterations is still not well defined. Thus the thresholds of blood bilirubin considered critical to the auditory impairment are not determined (11).

Amplitude-integrated electroencephalography (aEEG) is a simplified continuous electroencephalography (EEG) recording method, which has the advantages of simple operation, ease of judging graphics, and long-term bedside operation (12). Findings have proved that aEEG changes can show early than photographic examinations, etc. (13). Numerous data on neonatal brain maturity can be obtained through quantitative reading and scoring of aEEG graphics (14). In recent years, aEEG has been widely used in various fields of neonatology, such as seizure detection (15,16), preterm infants (17,18), metabolic disorder (19), brain damage (20), and hypoxic-ischemic encephalopathy (21,22). However, as a relatively new method of brain function monitoring, whether aEEG could be used to facilitate the early diagnosis of ABE is still unclear.

Our study aimed to develop a clinical prediction model based on aEEG for the early detection of ABE, and evaluate its predictive ability added to conventional clinical information such as bilirubin/albumin (B/A) value.

We present the following article in accordance with the TRIPOD reporting checklist (available at http://dx.doi.org/10.21037/tp-21-35).

A total of 114 neonates with hyperbilirubinemia admitted to the Beijing Chaoyang Hospital, Capital Medical University, from August 2015 to October 2018 were enrolled in the study. There were 62 (54.38%) males, and the age (in days) of undergoing aEEG examinations ranged from 2 to 23 days, with an average of 7.61±4.08 days. Inclusion criteria were as follows: (I) the peak serum total bilirubin level was higher than the 95th percentile of the hourly bilirubin line chart (14); (II) ≥35 weeks of gestation. Exclusion criteria were as follows: (I) presence of congenital craniocerebral dysplasia; (II) presence of neonatal ischemic hypoxic encephalopathy, neonatal respiratory distress syndrome, viral encephalitis, and other diseases affecting the central nervous system; (III) presence of serious genetic metabolic disease.

This study was approved by the Central Ethics Committee at Beijing Chaoyang Hospital, Capital Medical University (the approval No.2019-3-15-2). Written informed consent was signed by legally authorized representatives. All procedures performed in this study involving human participants were in accordance with the Declaration of Helsinki (as revised in 2013).

The diagnosis of ABE in this study was based on the BIND score, which was scored according to the patient’s mental state, muscle tone, and crying (shown in Table 1). Each item was scored 0–3 points, and the total BIND score ranged from 0 to 9. A BIND score greater than 0 was diagnosed as ABE. The BIND score was evaluated by trained senior pediatric neurologists according to the standard operating procedure.

Figure 4 aEEG recording with none SWC. Both the upper and lower boundaries were not visible. aEEG, amplitude-integrated electroencephalography; SWC, sleep-wake cycling.

We used percentage for categorical variables and mean ± standard deviation (SD) for continuous variables. To compare categorical variables, we used a chi-square (χ2) test. For comparing continuous variables, we used the t-test or Wilcoxon rank sum test for continuous variables. Multivariate stepwise logistic regression was used to investigate the factors associated with ABE and establish the clinical prediction model. Area under the curve (AUC) from the C-statistic was used to evaluate the predictive ability. A C-statistic of 1.0 indicated a perfect prediction, whereas a C-statistic of 0.5 indicated that the prediction did not differ from a random prediction. Calibration was assessed using Hosmer-Lemeshow (HL) goodness-of-fit χ2 test. The analysis was performed using the statistical software SPSS 23.0 (IBM Corp., Armonk, NY, USA) and STATA15 (StataCorp LLC. College Station, TX, USA). Finally, the decision curve analysis (DCA) was conducted to evaluate the model using R 3.6.1 software (https://www.R-project.org/).

Among the 114 neonates with hyperbilirubinemia, 23 were diagnosed as ABE according to the BIND score, with a prevalence of 20.18%. No significant differences were found among participants regarding gender, age undergoing aEEG, and other factors except weight between the ABE and non-ABE patients (shown in Table 2). The maturation of SWC, duration of 1 SWC, and number of cycles within 3 hours were significantly different between the ABE and non-ABE participants (Table 3). 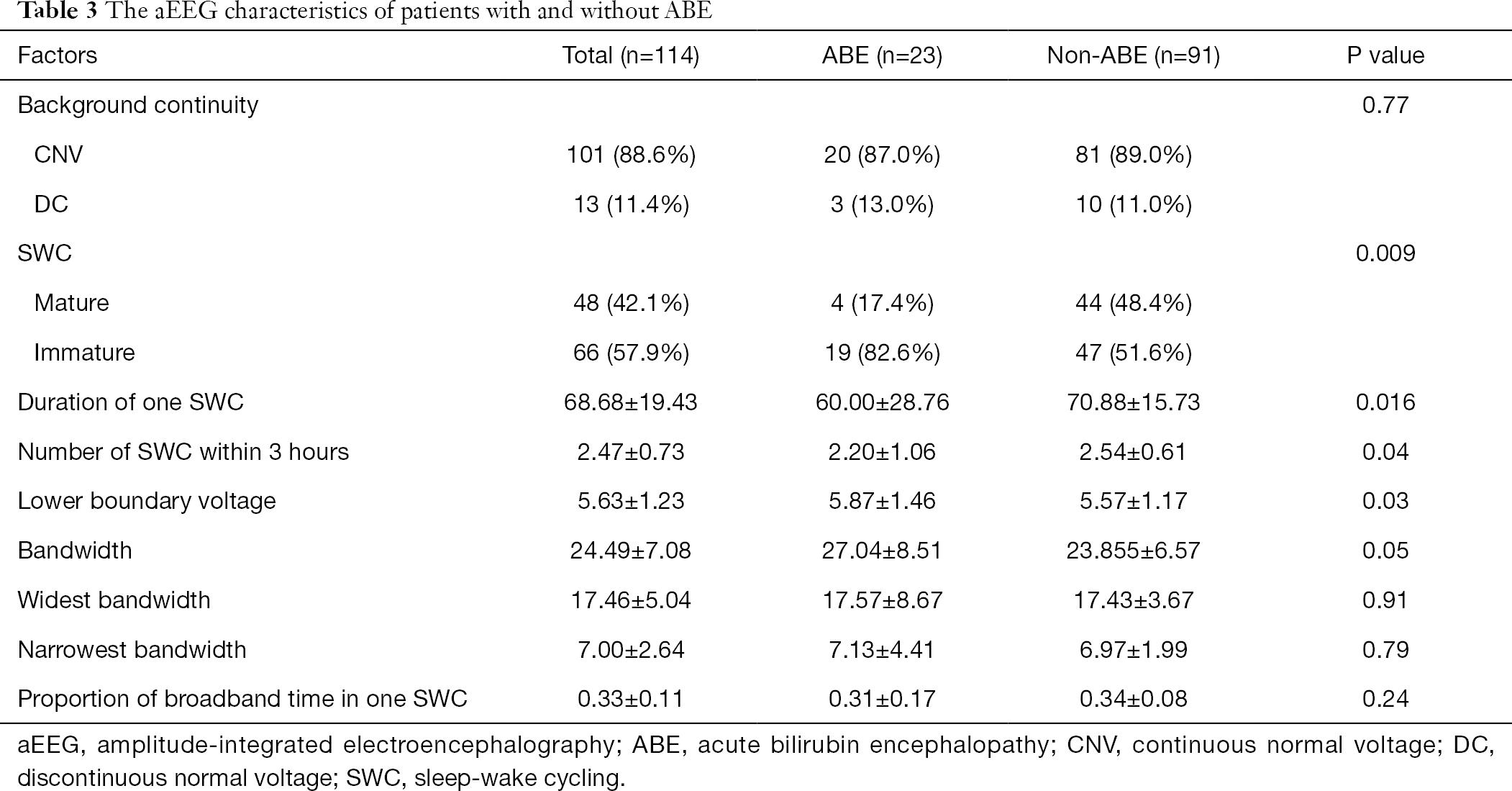 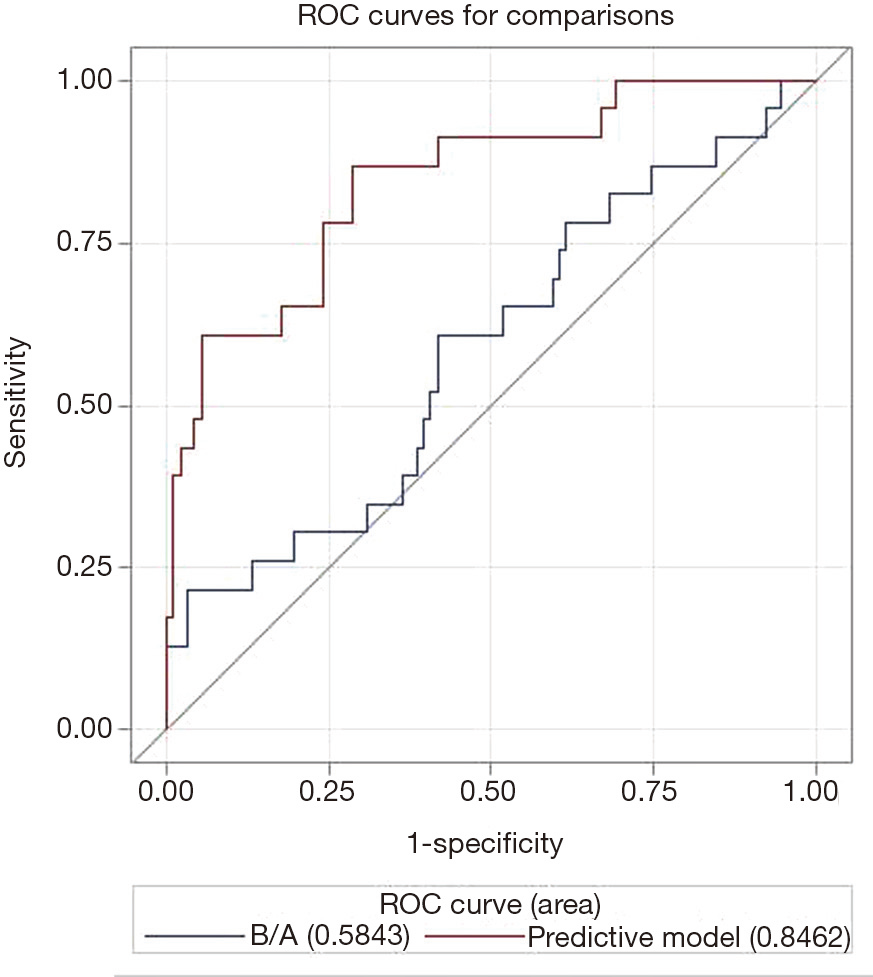 Figure 5 ROC curve comparison between the model of B/A and the model established in the study. The AUC of this clinical prediction model was significantly higher than the AUC of the model with only the conventional clinical variable of B/A. (AUC: 0.85 vs. 0.58, P=0.0003). ROC, receiver operating characteristic.

This study performed in-depth analysis of the graphic indicators of aEEG, and developed a clinical prediction model of ABE based on aEEG, which significantly improved the predictive ability of ABE compared to the model based on only the conventional clinical information.

Previous brain function monitoring could only identify the occurrence of brain injury (18,23), but the identification of the different types of brain injury disease often depends on imaging such as cranial nuclear magnetic resonance. However, the accuracy of MRI in diagnosing ABE is still controversial. Since normal myelination can also show different manifestations on images while under developing stage (10), it is difficult to discriminate the differences between diseased and normal myelination (24). Similarly, conventional brain function monitoring for neonates with hyperbilirubinemia cannot determine the occurrence of ABE, because it is still unknown which degree of brain dysfunction or kind of specific graphic characteristics are associated with bilirubin encephalopathy. The pathogenesis of ABE is that bilirubin is deposited in the basal ganglia (2,25), where the aEEG monitoring area (12) locates. Studies in animal models have shown the vulnerable regions of bilirubin encephalopathy were cerebellum, cochlea, oculomotor nucleus, basal ganglia, and hippocampus (25). The hypothalamus globus pallidus loop is closely related to the electrical activity of cortical neurons, and they both participate in the maintenance of the sleep-wake cycle (26). Thus, EEG activity change in the acute phase of bilirubin encephalopathy has its corresponding neuropathological basis. Therefore, we hypothesized that aEEG may play a role in the diagnosis or prediction of ABE; in other words, ABE may have its special graphical characteristics of aEEG.

In our study, we included all known aEEG monitoring indicators in combination with conventional clinical information including B/A and risk factors for hyperbilirubinemia. Using multivariable stepwise logistic regression, we developed a clinical predictive model for ABE, which included the following variables: the type of SWC, SWC duration, number of SWC within 3 hours, widest bandwidth, B/A value, and risk factors for hyperbilirubinemia. This clinical predictive model showed an AUC of 0.85 (95% CI: 0.75–0.94), which was significantly higher than the AUC based only on conventional clinical information of B/A value (AUC: 0.58, 95% CI: 0.45–0.72).

We found that the graphic indicators of SWC and amplitude may be the most sensitive variables, which is in line with findings in previous studies which reported these factors as closely related to central nervous system maturation (14,26-28). Sleep is an important neurological activity in the neonatal period. The observation of neonatal SWC can assist early detection of nerve function injury induced by bilirubin, and further analyze the brain function characteristics of ABE. Abnormalities in SWC may be manifested as delayed onset, reduced, or absence of existing SWC. The disappearance or disorder of normal sleep cycle is a serious EEG abnormality, presenting as reductions in both SWC duration and number of SWC within 3 hours. Structure of SWC can also be changed, some studies showed that the quiet sleep period ratio decreased, accordingly the active sleep period ratio increased (29). Our study did not reveal this feature, but showed a pattern of changes with the SWC structure increase of the widest bandwidth. This increase in amplitude is contrary to the brain maturation process, suggesting a correlation with bilirubin toxicity. Previous studies have reported B/A value as a predictor for bilirubin encephalopathy (29,30), with higher total B/A ratio increasing the risk of bilirubin encephalopathy by 23% (odds ratio: 1.23, 95% CI: 1.16–2.48). Our clinical prediction model, which added graphic indicators of aEEG to B/A value, significantly improved the predictive ability.

In clinical work, diagnosing neonatal bilirubin encephalopathy quickly and accurately is critical for creating a treatment strategy and prognostic evaluation. Currently, aEEG is the best tool for assessing the brain functional status of newborns (13). It can quickly and accurately assess the degree of brain damage in newborns, but it still lacks specific evaluation indicators. Moreover, it cannot provide evidence which is strong enough to assess the bilirubin encephalopathy based on aEEG alone. The establishment of the clinical prediction model in this study provided a convenient and effective clinical application tool for early identification and judgment of the occurrence of ABE. The AUC of this prediction model was 0.85, which showed a high predictive value.

Our study had some limitations. In this study, neonates with ABE treated in our hospital were mainly mild cases and only a few severe cases were included. The predictive ability of this model for neonates with severe ABE needs to be further evaluated, including the effect of seizures and other specific severe aEEG changes Furthermore, this model needs external validation in a multi-center study. In future work, we will perform a multicenter, larger-sample, and prospective cohort study to validate this clinical prediction model, and to evaluate its predictive value for long-term prognosis of neonatal ABE. Survivors of ABE infants will be follow-up and evaluated through multiple measurements, including the magnetic resonance image, auditory brainstem response, Denver Development Screening Test and etc. Besides, the predictive and diagnosing value of aEEG on preterm or full-term infants as well as hyperbilirubinemia will also be studied in our future studies.

In summary, this study developed a clinical prediction model with good predictive ability for ABE based on aEEG, which is of great significance for the early detection and diagnosis of ABE. However, it needs to be further validated in a future multi-center study.

Reporting Checklist: The authors have completed the TRIPOD reporting checklist. Available at http://dx.doi.org/10.21037/tp-21-35

Conflicts of Interest: All authors have completed the ICMJE uniform disclosure form (available at http://dx.doi.org/10.21037/tp-21-35). The authors have no conflicts of interest to declare.

Ethical Statement: The authors are accountable for all aspects of the work in ensuring that questions related to the accuracy or integrity of any part of the work are appropriately investigated and resolved. The study was approved by the central Ethics Committee at Beijing Chaoyang Hospital, Capital Medical University (The approval No.2019-3-15-2). Written informed consent was signed by legally authorized representatives. All procedures performed in this study involving human participants were in accordance with the Declaration of Helsinki (as revised in 2013).