Immunoglobulin A Nephropathy (IgAN), defined by the mesangial deposits of IgA as the predominant immunoglobulin class, is a common glomerular disease identifiable by pathologists and is observed in both children and adults. Most IgAN patients are progressive cases, with 25% of cases reaching end-stage renal disease (ESRD) in 20 years after diagnosis. The origin of several progressive IgAN varieties often begins in the pediatric age and early intervention could prevent progression of the disease (1). Thus, biomarkers related to IgAN at onset of the disease are needed to predict progression in children.

In 2000, Tomino et al. reported that patients who had higher serum IgA/C3 ratio were more likely to be diagnosed with IgAN (2). Since then, the IgA/C3 ratio has used as a prognostic biomarker not only to evaluate the differential diagnosis between IgAN and other glomerulonephritides, but also to predict progression in IgAN (3-5). Complements activation also plays a very important role in the pathogenesis of IgAN (6). Glomerular C3 staining was found to associate with the severity of pathological findings and could predict prognosis in severe IgAN (3,7). In this study, we focused on these two biomarkers.

Proteinuria, reduced glomerular filtration rate (GFR), and severe histological lesions were considered as risk factors of nephropathy progression (8). These risk factors, which have been assessed in several clinical studies at onset of the disease, were found to be significantly associated with progression in IgAN (8,9). Thus, in this study, we aimed to evaluate the relationship between biomarkers (serum IgA/C3 ratio and glomerular C3 staining) and risk factors at the onset of disease for predicting progression of IgA nephropathy in children. We present the following article in accordance with the STARD reporting checklist (available at http://dx.doi.org/10.21037/tp-21-90).

This was a retrospective study that included 41 children (26 boys and 15 girls) who had been diagnosed with IgA nephropathy in Tianjin Children’s Hospital in China from April 2017 to July 2020. Admission criteria were as follows: (I) diagnosis of IgAN according to renal biopsy which showed the presence of IgA deposits predominating over other types of deposits; (II) children with systemic diseases, such as systemic lupus erythematosus or Henoch-Schoenlein purpura nephritis, were excluded from the study; (III) no previous treatment with immunosuppressive drugs or corticosteroids before.

For this study, we analyzed clinical data, including age, selected biochemical parameters, and renal biopsy findings at the onset of IgAN. We evaluated serum IgA, C3, creatinine, albumin, proteinuria, erythrocyturia, GFR, and calculated the IgA/C3 ratio. Serum IgA and C3 were measured using the immunoturbidimetry method. Proteinuria was measured in a 24-h urine test and was expressed in mg/kg/day. Nephrotic range proteinuria was defined as urinary protein ≥50 mg/kg/day and non-nephrotic-range proteinuria was defined as urinary protein <50 mg/kg/day. Hematuria included microscopic hematuria which was established as >5 erythrocytes per field of view under a microscope, and gross hematuria which was defined as the macroscopic presence of blood in urine. The GFR was calculated based on the Schwartz formula.

The Oxford classification (OC) of IgAN was used to assess IgAN severity according to renal biopsy. The presence of a given finding, including mesangial hypercellularity (M), endocapillary hypercellularity (E), segmental sclerosis (S), and tubular atrophy/interstitial fibrosis (T), was scored 1. The absence of a given finding was scored 0. The MEST score (M+E+S+T) ranged from 0-4. In the biopsy samples, the presence of crescent was also evaluated. In this study, renal biopsies were evaluated by pathologists in the Tianjin Children’s Hospital.

The study was conducted in accordance with the Declaration of Helsinki(as revised in 2013).The study was approved by institutional ethics committee of Tianjin Children’s Hospital and informed consent was taken from all the patients.

Shapiro-Wilks tests were used to evaluate normal distribution of variables. For normally distributed variables, the Student t-test was used to compare differences between mean values in two groups for unpaired samples and analysis of variance (ANOVA) was used in 3 or more groups. For nonnormally distributed variables, the Kruskal-Wallis test was used. The receiver operating characteristic (ROC) curve was used to determine the optimal cutoff value of the IgA/C3 ratio for two groups. A P value <0.05 was considered statistically significant. The software SPSS version 26.0 (IBM Corp., Armonk, NY, USA) was used for statistical analyses.

The basic characteristics of 41 children with IgA nephropathy are shown in Table 1. The average age of the subjects was 9.37±2.84 years old. The ratio (male/female) was 1.73:1. Among 41 children with IgA nephropathy, 21 cases had proteinuria (51.22%), 39 cases had hematuria (including microscopic hematuria and gross hematuria), and the incidence of hematuria was 95%. An elevated serum IgA level was found in 18 participants (41%). 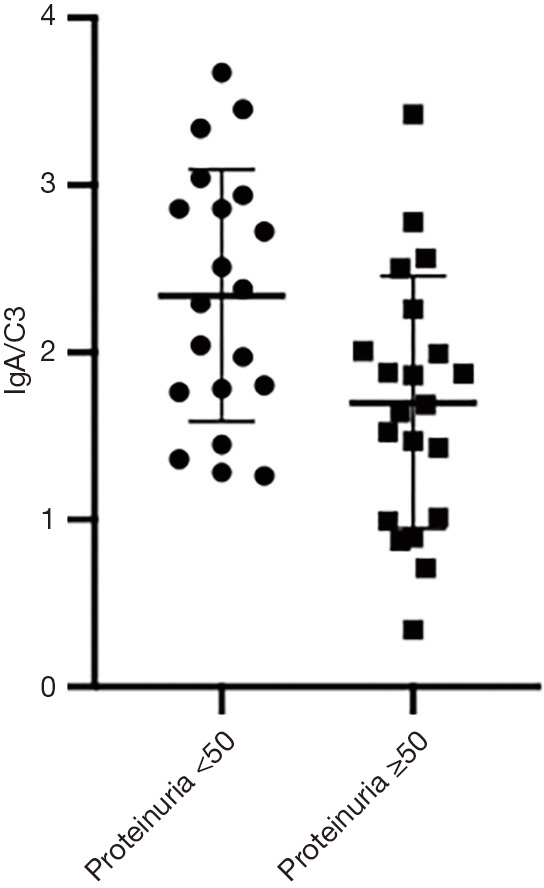 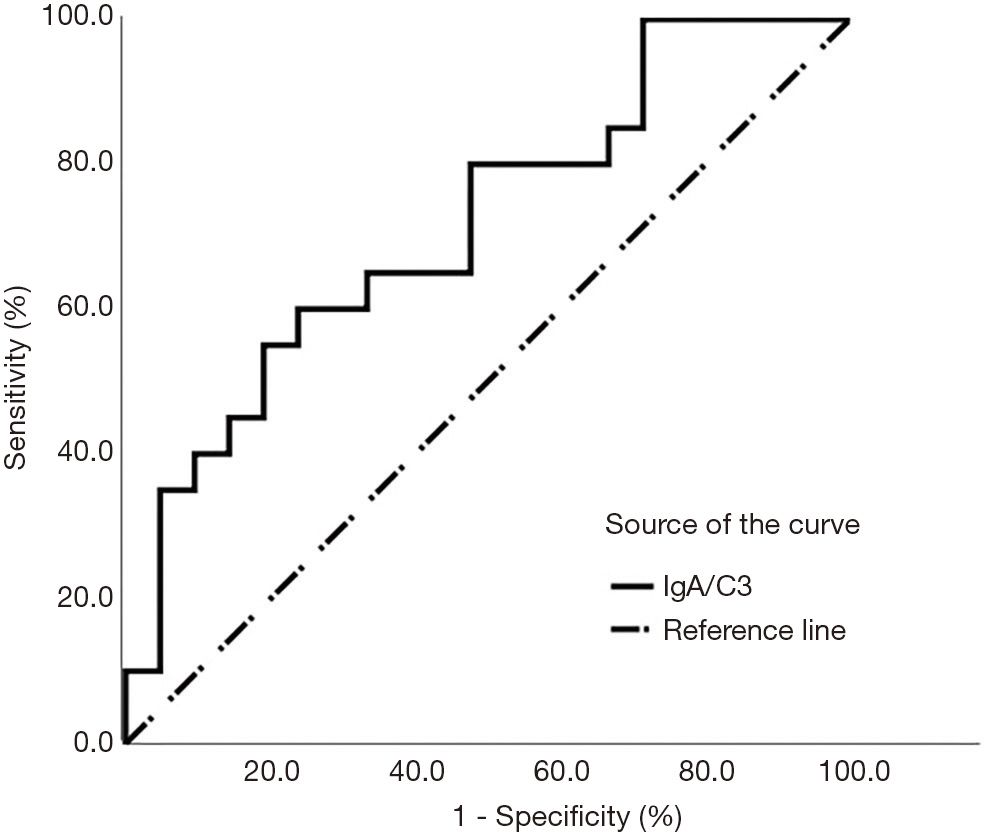 According to the optimal cutoff value of 2.025, serum IgA/C3 ratios were used to allocate patients to the two groups (Table 3). Proteinuria was significantly higher in IgA/C3 <2.025 group, compared with IgA/C3 ≥2.025 group. However, GFR did not differ between the two groups.

Histological analyses are shown in Table 5 according to the Oxford classification criteria. The ratios of M0/M1, E0/E1, S0/S1, T0/T1/T2 and the ratios of the absent/present crescents were all similar in each group. In addition, MEST scores did not differ among the four groups. The combination of serum IgA/C3 ratio (cutoff value 2.025) and glomerular C3 staining is not a good marker for predicting histological severity of kidney lesions at onset of the disease.

Among the forms of glomerular disease, IgAN is the most common worldwide, and is associated with a poor prognosis. In 2011, Suzuki et al. hypothesized that the pathogenesis of IgAN was based on 4 hits. The onset of IgAN required Gd-IgA1 (Hit 1). With the progression of the disease, endogenous anti-glycan antibodies (Hit 2), subsequent immune complexes formation (Hit 3), and glomerular deposition (Hit 4), were involved in the IgAN pathogenesis (10). IgA-based activation of the complement system also plays a critical role in the pathogenesis of IgAN (11).

Hematuria is the predominant manifestation of IgAN. In our study, hematuria was present in 95% of pediatric patients, compared to 92% in Polish children, and 88% in Japanese children (14,15).

After rating renal biopsy findings using the Oxford classification, we found that there was no relationship between M0/M1, E0/E1, S0/S1, T0/T1/T2, absence/presence of crescents as well as MEST scores, and these two biomarkers at the first renal biopsy. A study by Stefan also showed that there was no correlation between IgA/C3 ratio and the Oxford classification in European adult patients (23).

This study was relatively small in scale, and the findings require confirmation via a large scale study. However, we believed it was worthy to conclude that serum IgA/C3 ratio and glomerular C3 staining may be useful biomarkers of the progression of IgA nephropathy in children.

Reporting Checklist: The authors have completed the STARD reporting checklist. Available at http://dx.doi.org/10.21037/tp-21-90

Conflicts of Interest: All authors have completed the ICMJE uniform disclosure form (available at http://dx.doi.org/10.21037/tp-21-90). The authors have no conflicts of interest to declare.

Ethical Statement: The authors are accountable for all aspects of the work in ensuring that questions related to the accuracy or integrity of any part of the work are appropriately investigated and resolved. The study was conducted in accordance with the Declaration of Helsinki (as revised in 2013). The study was approved by institutional ethics committee of Tianjin Children’s Hospital and informed consent was taken from all the patients.