Pediatric severe sepsis and septic shock continue to be a leading cause of pediatric intensive care unit (PICU) admissions, and have shown to be related to significant pediatric mortality and healthcare costs (1,2). Alert and timely diagnosis and treatment continue to be recommended as the optimal method of choice for preventing severe pediatric sepsis and septic shock (3). Over the last decades, no single novel effective medical therapy or decisive diagnostic tool has been reported (3). Although the mortality of pediatric sepsis is declining, the burden of poor prognosis of severe sepsis in the pediatric population continues to be difficult to eliminate (4); therefore, the focus on this patient population should be intensified. Thus far, early the detection and treatment have been demonstrated to have the greatest effect in improving prognosis for pediatric severe sepsis patients.

Numerous biomarkers have been evaluated to distinguish sepsis from non infectious causes of SIRS, although none have been entirely useful. Procalcitonin (PCT) is currently the most frequently used biomarker for sepsis and increases during systemic inflammatory response and sepsis, especially in systemic bacterial, parasitic and fungal infections. However, the PCT testing is expensive and takes a long time. Therefore, clinicians need to develop tools which are inexpensive, rapid and easy to measure.

The neutrophils and the lymphocytes are the key cellular component of the human host defense system against an infection. During the course of sepsis, the number of white blood cells may vary, depending on the stage of sepsis, the patient’s immunologic status, and the etiology of the infection. Increased number of neutrophils and decreased number of lymphocytes alert the clinician for an infection. A higher NLR may indicate a severe inflammatory progression in the patient (5). Although a number of clinical biomarkers for sepsis have been extensively studied, few have been examined in pediatric sepsis, especially severe sepsis (6-9). As a biomarker, the predictive and prognostic value of NLR in pulmonary and cardiovascular disease, as well as cancer, has been indicated (10,11). There were many reports about the applications of neutrophil-to-lymphocyte ratio (NLR) as a predictive marker for adult sepsis, however, there was only one study about NLR for pediatric sepsis, and the included samples were few (12,13). We enrolled 202 children to assess whether initial NLR at PICU admission could effectively predict the incidence of severe sepsis in children.

We present the following article in accordance with the STROBE reporting checklist (available at http://dx.doi.org/10.21037/tp-21-47).

This retrospective study recruited critically ill children with severe sepsis who were admitted to the PICU of the Department of Critical Care Medicine, West China Hospital of Sichuan University, from January 2019 to January 2020. The ethics committee of West China Hospital of Sichuan University approved this study (No. NCT03598127). All procedures performed in this study involving human participants were in accordance with the declaration of Helsinki (as revised in 2013). Individual consent for this retrospective analysis was waived.

Patients were eligible for inclusion based on the following criteria: (I) older than 60 days and younger than 18 years; (II) diagnosed as severe sepsis or septic shock during PICU hospitalization; (III) counts of lymphocyte and neutrophil determined at PICU admission. Meanwhile, the exclusion criteria were as follows: (I) younger than 60 days or older than 18 years; (II) missing data regarding lymphocyte and neutrophil at PICU admission; (III) missing covariate data for multiple-variable alterations; (IV) repeated admissions to the PICU. Patients satisfying the recruitment standards were enrolled in the study.

We collected the following data for all the patients within 24 hours of admission from the database at PICU: demographic information, source of infection, and laboratory tests. To estimate disease severity, Pediatric Risk of Mortality (PRISM III) score, a physiology-based predictor for risk of mortality, was calculated at the baseline within 24 hours of admission at the PICU (15). We collected laboratory findings, including white blood cell, neutrophil, lymphocyte, monocyte, and platelet counts; NLR and platelet-to-lymphocyte ratio (PLR); and albumin and PCT levels. The primary outcome was all-cause mortality 28 days after PICU arrival. Secondary clinical outcomes were hospital stay time, PICU stay time, and mechanical ventilation length.

SPSS version 22.0 (IBM Corp., USA) and MedCalc version 15.0 were used for statistical analyses. General distribution data are expressed as mean and SD, while binomial variables are expressed as median or interquartile range (IQR). Categorical variables were compared using the χ2 test. The variables of the severe sepsis and control groups were compared using the t-test or Mann-Whitney test. Univariate and subsequent multivariate logistic regression analyses were used to assess risk factors of severe pediatric sepsis.

Area under the receiver operating characteristic curve (AUC) was used to evaluate the variables’ predictive performance. When a significant AUC was generated, the maximum possible sum of the sensitivity and specificity levels was considered to be the optimal cutoff point. A P value <0.05 indicated statistical significance.

Baseline characteristics of the patient 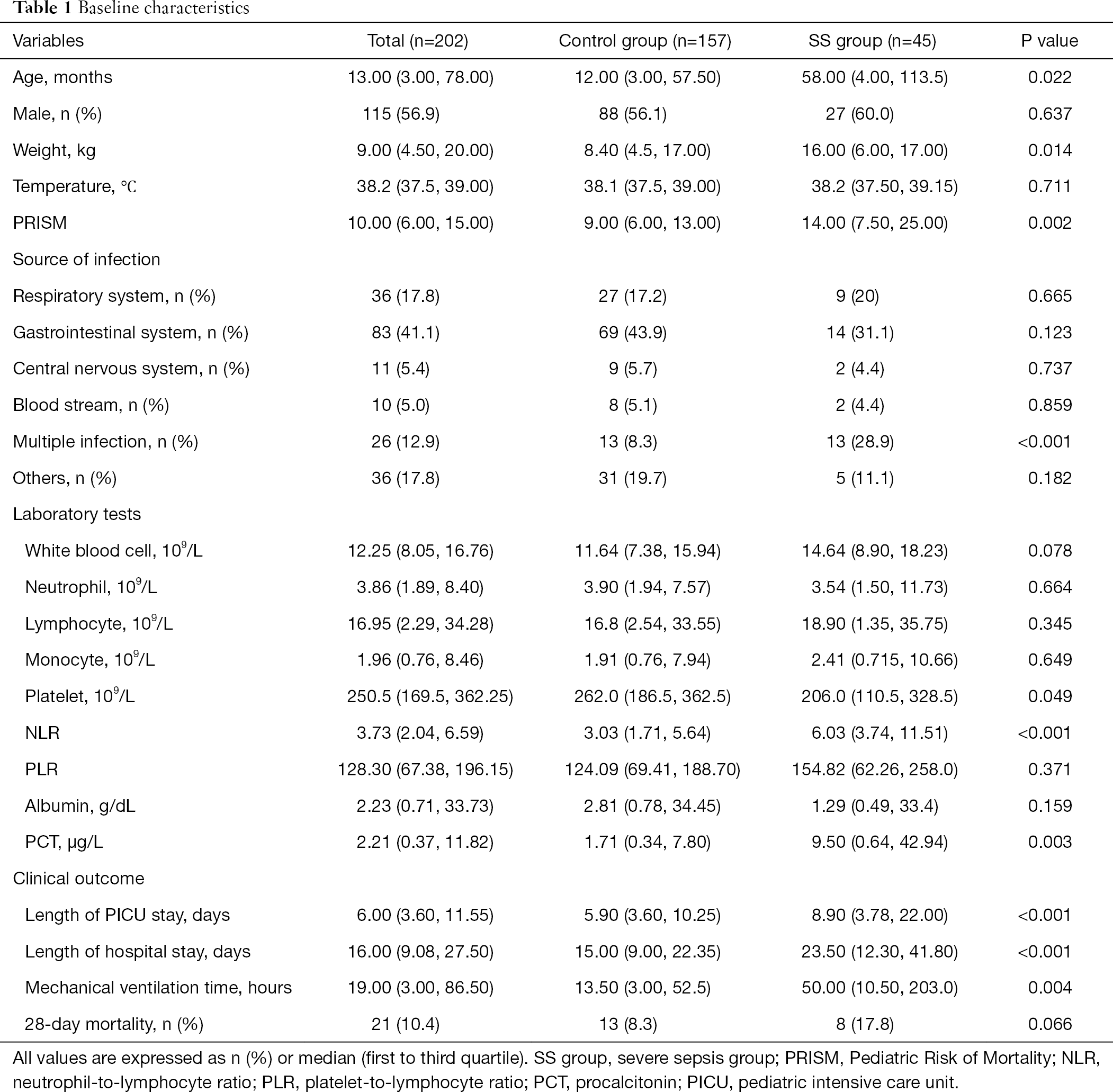 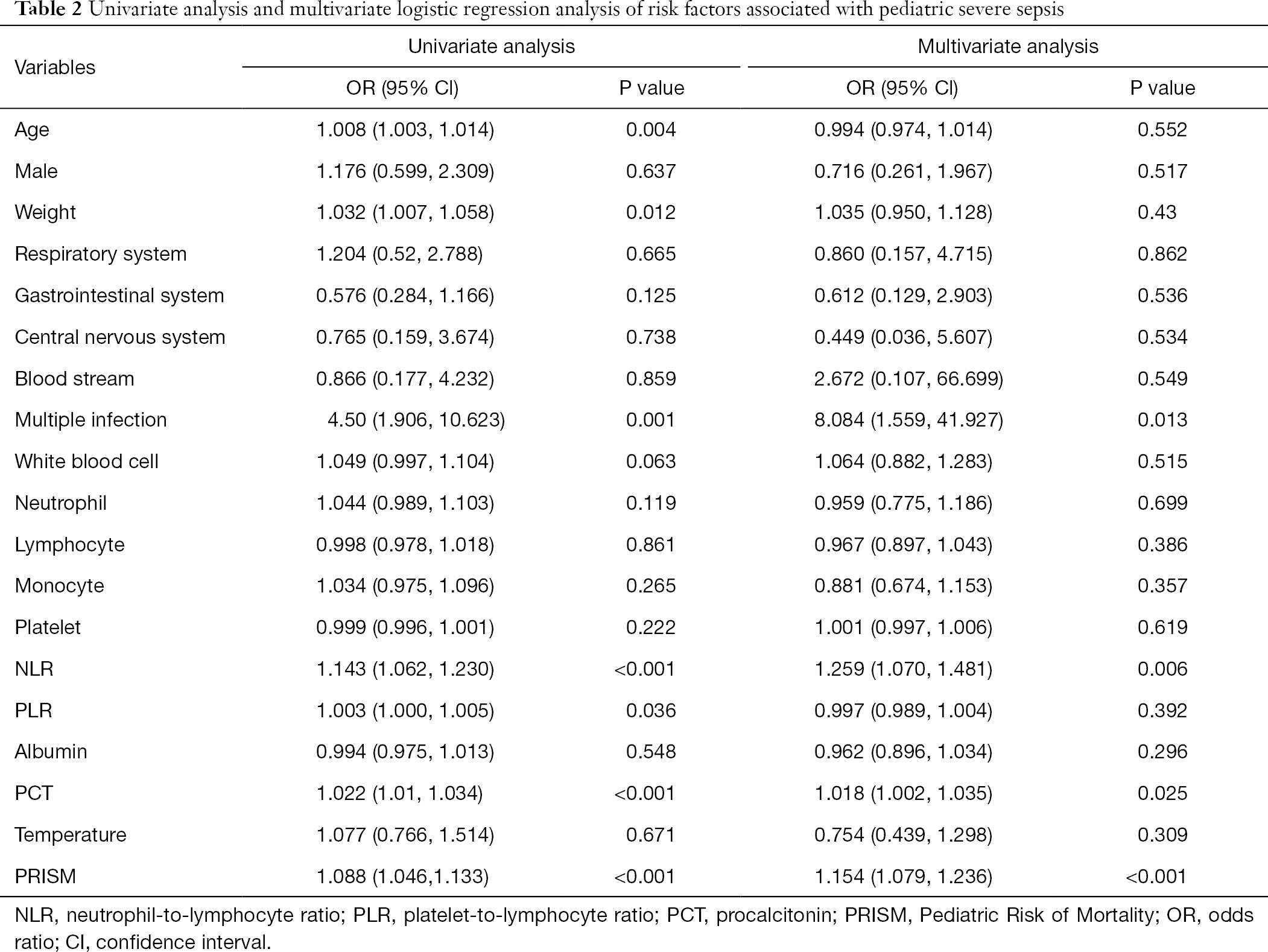 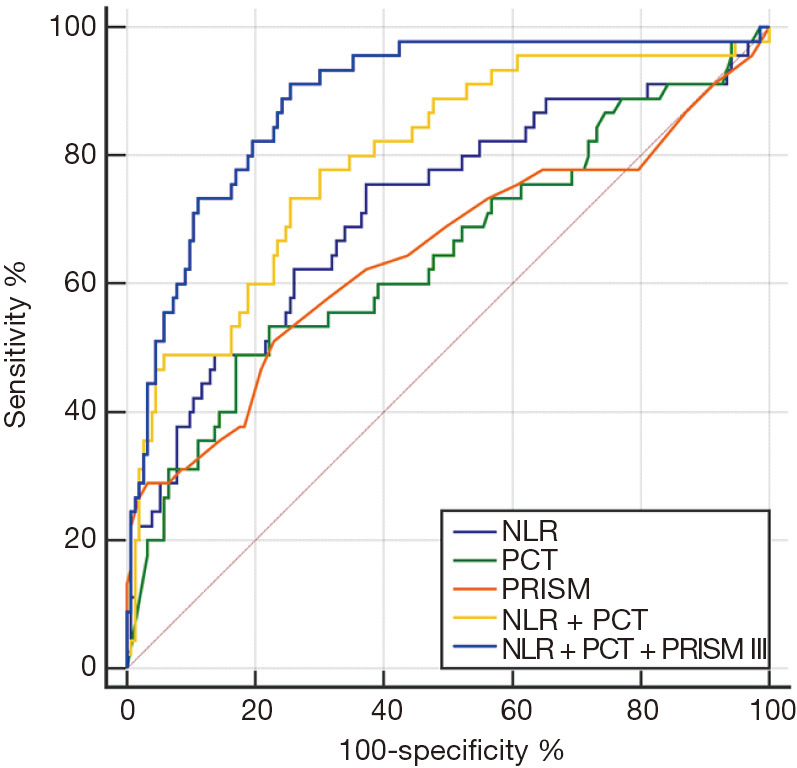 Predictive value of the constructed model

We constructed a combined Receiver operating characteristic (ROC) curve model of NLR and PCT. The AUC of the NLR + PCT model was 0.795 (P<0.001), which was noticeably higher than that of the NLR-alone (Z=2.051, P=0.043) and PCT-alone (Z=3.108, P=0.002) models (Figure 2). Furthermore, we made use of three statistically significant factors, including PRISM III, PCT, and NLR, to construct the predictive model. The predictive model of NLR+PCT+PRISM III exhibited an AUC of 0.888 (P<0.001). The sensitivities and specificities of the predictive model were 91.1% and 74.5%, respectively, which were noticeably higher than those of the NLR + PCT (Z=2.948, P=0.003) model (Figure 2). The nomogram and calibration plot for NLR + PCT in predicting severe sepsis in pediatric patients are presented in Figure 3. 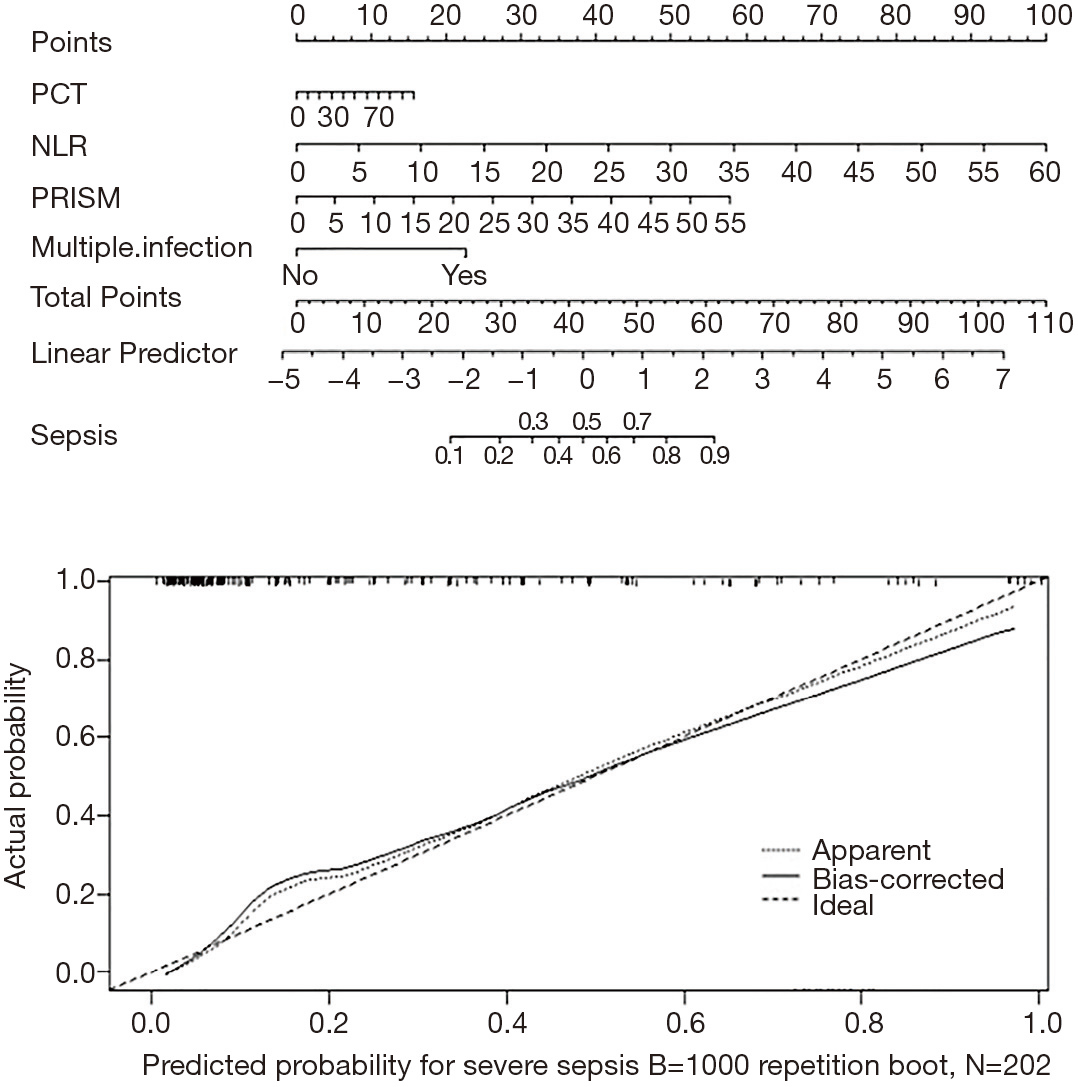 In this study, we found that the initial NLR obtained at PICU admission was a significant predictive biomarker for pediatric severe sepsis patients. Moreover, the predictive model of NLR + PCT + PRISM III demonstrated a greater prediction performance and could provide earlier detection of severe sepsis and better guide clinical practice. Our research placed a higher emphasis on assessing the incidence of severe sepsis in children, which might be the key to reducing mortality in the PICU. This study was the first to examine the relationship between NLR and severe pediatric sepsis in the PICU.

Unlike sepsis, severe sepsis is more associated with the failure of multiple organs and includes cardiovascular, respiratory, neurologic, hematologic, renal, and hepatic dysfunction (14). Mortality for severe pediatric sepsis has been reported to be nearly 3 times higher than that for regular sepsis (16). Thus, severe sepsis is a key contributor to high ICU mortality in children, and our study has highlighted the need for the early detection of this condition. Before severe sepsis develops into septic shock, early identification of patients who may progress to severe sepsis and antibiotic treatment and efficient fluid resuscitation may reduce mortality (17-20).

The causes of elevated NLR and poor prognosis in severe sepsis patients are unclear. One of the most convincing explanations is primarily based on the physiological link between systemic inflammation and stress (21-24). NLR is able to indicate the patient’s response to inflammation. The upregulation in the number of neutrophils may indicate the presence of an uncleared infected lesion which inhibits lymphocytes. Accumulating evidence has pointed to neutrophils as vital cellular components of the natural immune system’s defense against infection, with lymphocytes the being main cellular component of the adaptive immune system (25,26). Lymphocytes play an essential role in regulating inflammation, and the loss of lymphocytes attributed to apoptosis induced by persistent sepsis is likely to cause the suppression of the immune system (26). Therefore, neutropenia and lymphopenia resulting from the continuous suppression of the immune system may be the theoretical basis underlying the ability of NLR to predict severe sepsis.

In the present study, the predictive significance of NLR, combined with PCT and PRISM III score, in pediatric severe sepsis patients in the PICU was comparatively assessed. NLR was revealed to have a significant predictive capacity to predict severe sepsis in comparison with PCT in pediatric patients. Furthermore, the constructed predictive model of NLR + PCT + PRISM III showed an even better prediction significance than that of each of these factors used alone. The PRISM III score (15) was assessed used 17 physiologic variables classified in the following fashion: (I) cardiovascular and nervous system (systolic blood pressure, heart rate, temperature, Glasgow coma scale, pupillary reactions); (II) blood gas (acidosis, CO2, pH, PaCO2, PaO2); (III) blood routine and biochemistry test (white blood cell count, platelet count, partial thromboplastin time). As can be seen in the variables above, there is little emphasis to no emphasis on inflammation, neutrophils, and lymphocytes in the blood routine for calculating the score. Therefore, the addition of NLR and PCT can enhance the capacity of the PRISM III scores to predict severe sepsis.

Studies have shown that C-reactive protein (CRP) and PCT are good indicators for predicting sepsis in children (6). However, under various inflammatory conditions, CRP and PCT levels can also be elevated, so there is limited value in identifying infection from other causes of inflammation. Furthermore, the cost of PCT and CRP testing is relatively higher than that of NLR, especially CRP. Since there is no apparent inflammatory reaction in the early sepsis stage, PCT and CRP are not used as routine testing items. Thus, NLR also possesses the advantage of being more economical for early prediction.

This study has a few limitations that should be considered. First, our study was limited by its retrospective design. Second, because our hospital did not routinely detect CRP values, the authors could not compare the predictive ability of NLR and CRP. We hope that further research will focus on this aspect. Third, the number of patients enrolled in the study was small, and prospective analyses based on larger sample sizes are required for in-depth verification.

We acknowledge all staff who offered help for this study and particularly acknowledge Qiao Wang, from the Department of Medical Statistics in Sichuan University, for providing advice regarding the data analysis.

Funding: This work was supported by the Provincial Science and Technology Department Project in Sichuan (No. 2020YFS0164).

Reporting Checklist: The authors have completed the STROBE reporting checklist. Available at http://dx.doi.org/10.21037/tp-21-47

Conflicts of Interest: All authors have completed the ICMJE uniform disclosure form (available at http://dx.doi.org/10.21037/tp-21-47). The authors have no conflicts of interest to declare.

Ethical Statement: The authors are accountable for all aspects of the work in ensuring that questions related to the accuracy or integrity of any part of the work are appropriately investigated and resolved. The ethics committee of West China Hospital of Sichuan University approved this study (No. NCT03598127). All procedures performed in this study involving human participants were in accordance with the declaration of Helsinki (as revised in 2013). Individual consent for this retrospective analysis was waived.