Hemodynamic monitoring (HM) remains an important aspect of critically ill patient care, which originally promoted by Rivers et al. for patients with severe sepsis and septic shock (1). Although the use of HM at the bedside faces many challenges (2,3), goal-directed strategies of hemodynamic management based on parameters of extended hemodynamic and metabolic monitoring are increasingly recommended in different national and international guidelines (4-7).

This email-based survey aimed to study the current situation regarding the utilization of HM devices, the parameters used in HM, and potential individual and hospital differences in China. We present the following article in accordance with the SURGE reporting checklist (available at http://dx.doi.org/10.21037/tp-20-374).

The structured questionnaire was discussed by experts of the sub-association of pediatric intensive care physicians and was finalized after the pretesting in 5 pediatric intensivists from Shanghai Children’s Medical Center, Shanghai. Face validity, content validity, and clinical sensibility were evaluated.

The structure of the survey included a variety of single choice, multiple choice and open-ended questions. None of the questionnaires used a scoring scale. It was designed to take 10-20 minutes to complete. The questionnaire (Appendix 1) consisted of four pages and 22 questions divided in three sections: (I) general information on the hospitals, respective ICUs and participants, (II) the availability of technical equipment and parameters of HM and (III) simulated management of septic shock in three clinical case vignettes. The questionnaire was in Chinese.

National pediatric intensivists were invited to answer an electronic questionnaire at the second academic conference held in Beijing in 2017. We directly contacted members of the aforementioned association via email during a 2-week period from 1–15 May 2017. A cover letter (Appendix 2) explained the background, aims, and methods of the study and requested E-mail addresses of all pediatric intensivists in the member’s units. Questionnaire sheets were mailed to all participants on 16–30th May 2017, and the data were collected over a 4-weeek period, which was closed end of June 2017. Responses were voluntary, anonymous and unpaid. If the survey questionnaire was not recovered within the 4-week recycling period, a reminder would be sent by phone or Email.

According to the questionnaire sample scale, we calculated that 384 respondents were needed, with a sampling error of 5% and a confidence interval of 95%. We estimated that a study period of 4 weeks would be necessary to recover at least 384 questionnaires and reduce the non-response error. Results were analyzed according to the number of responses for each given question. The numerator and denominator for the prevalence calculation came from the survey form. The denominator of the response-rate was the number of emails we had collected and successfully sent. Reply to email and completion of any portion of the survey implied consent to participate. Ten hospitals did not submit any form and 17 people ended the survey incompletely and thus were excluded. There was no missing data.

Responses were obtained from 385 of 854 pediatric intensivists (response-rate 45.1%) emailed and 68 of 78 hospitals (response-rate 87.2%) in total. Seventeen people ended the survey incompletely, resulting in 368 fully completed responses. Fifteen questionnaires from the two hospitals were identical, and the other two questionnaires lacked more than 50% of the items, so they were excluded. 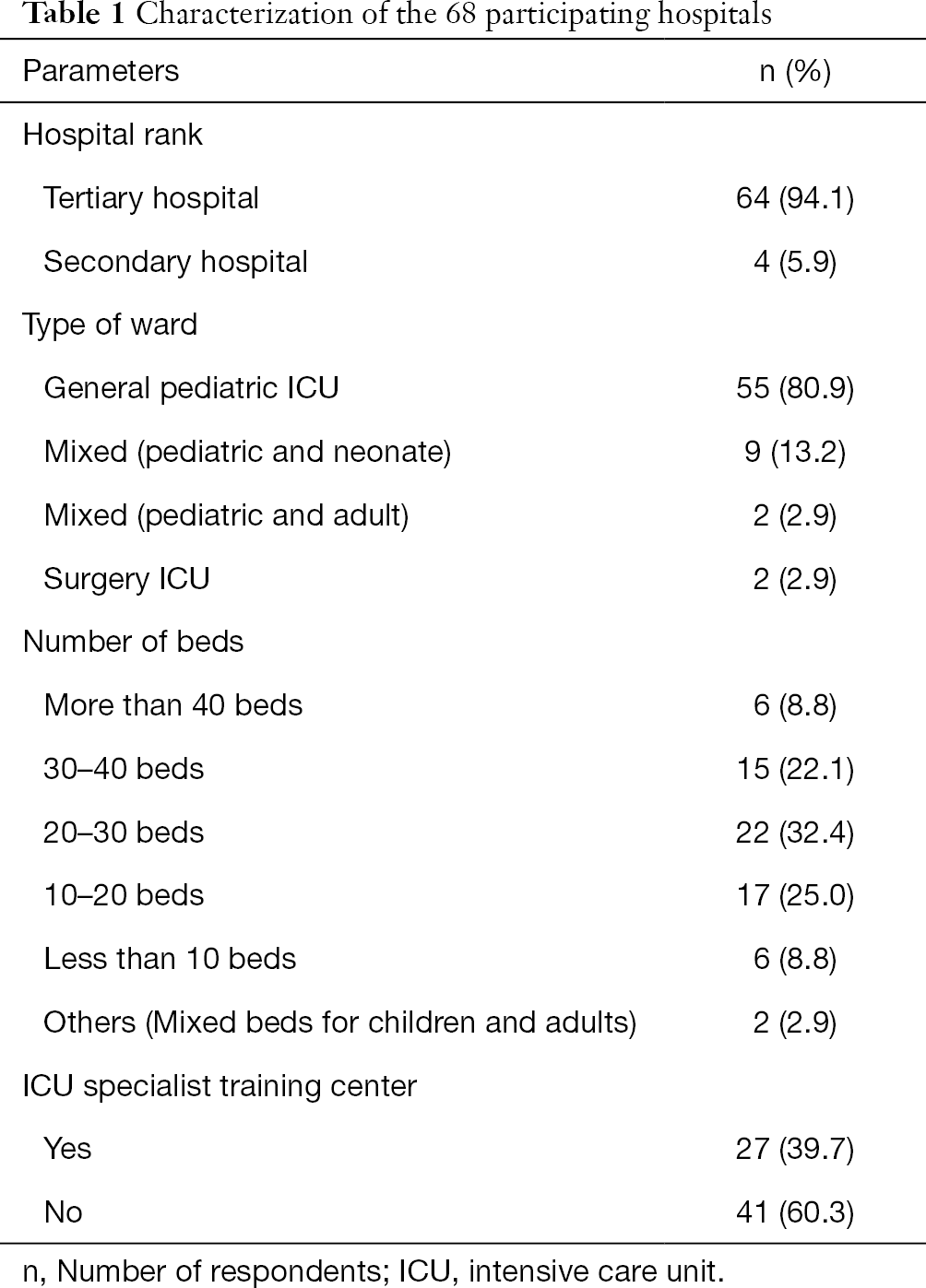 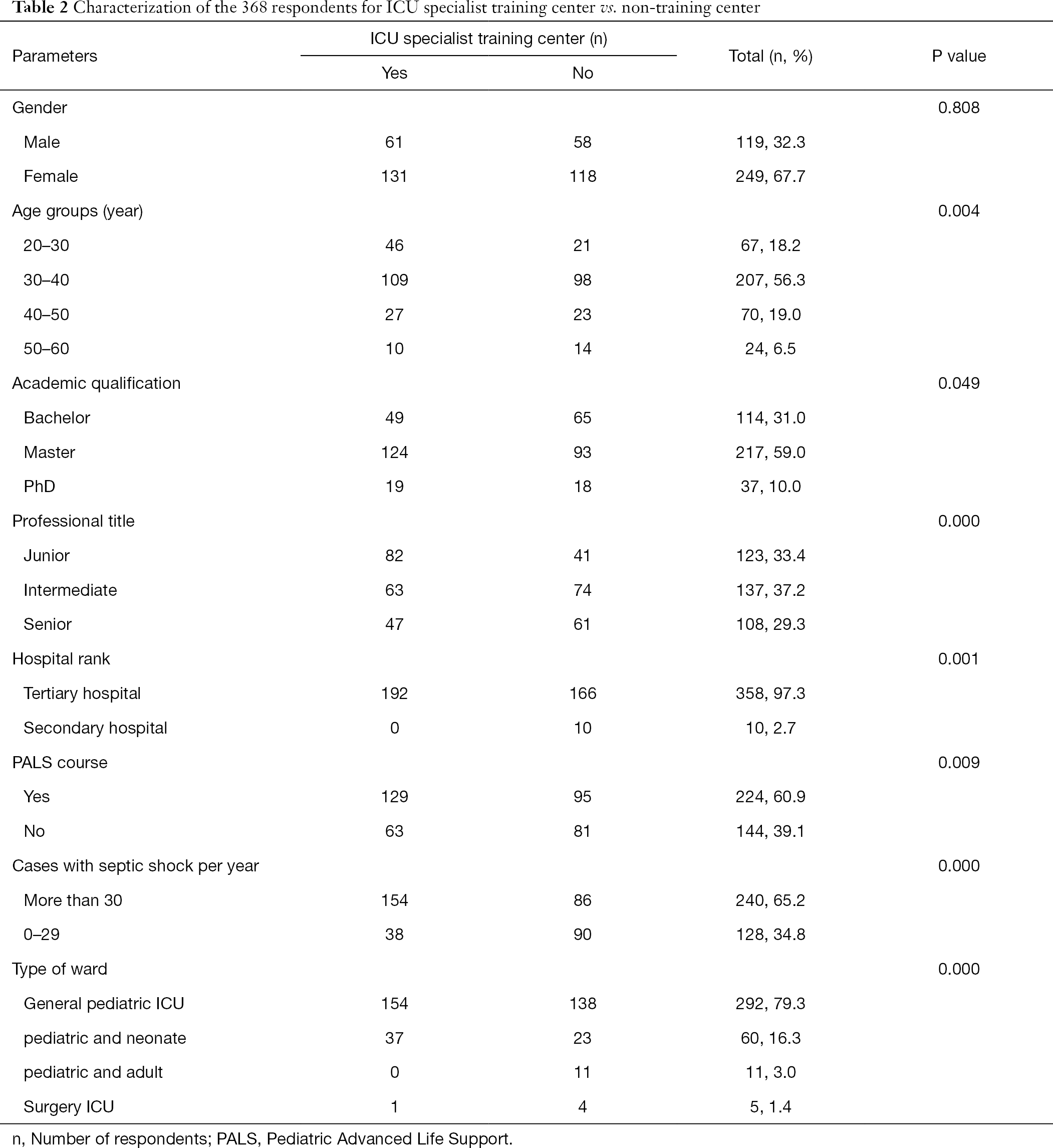 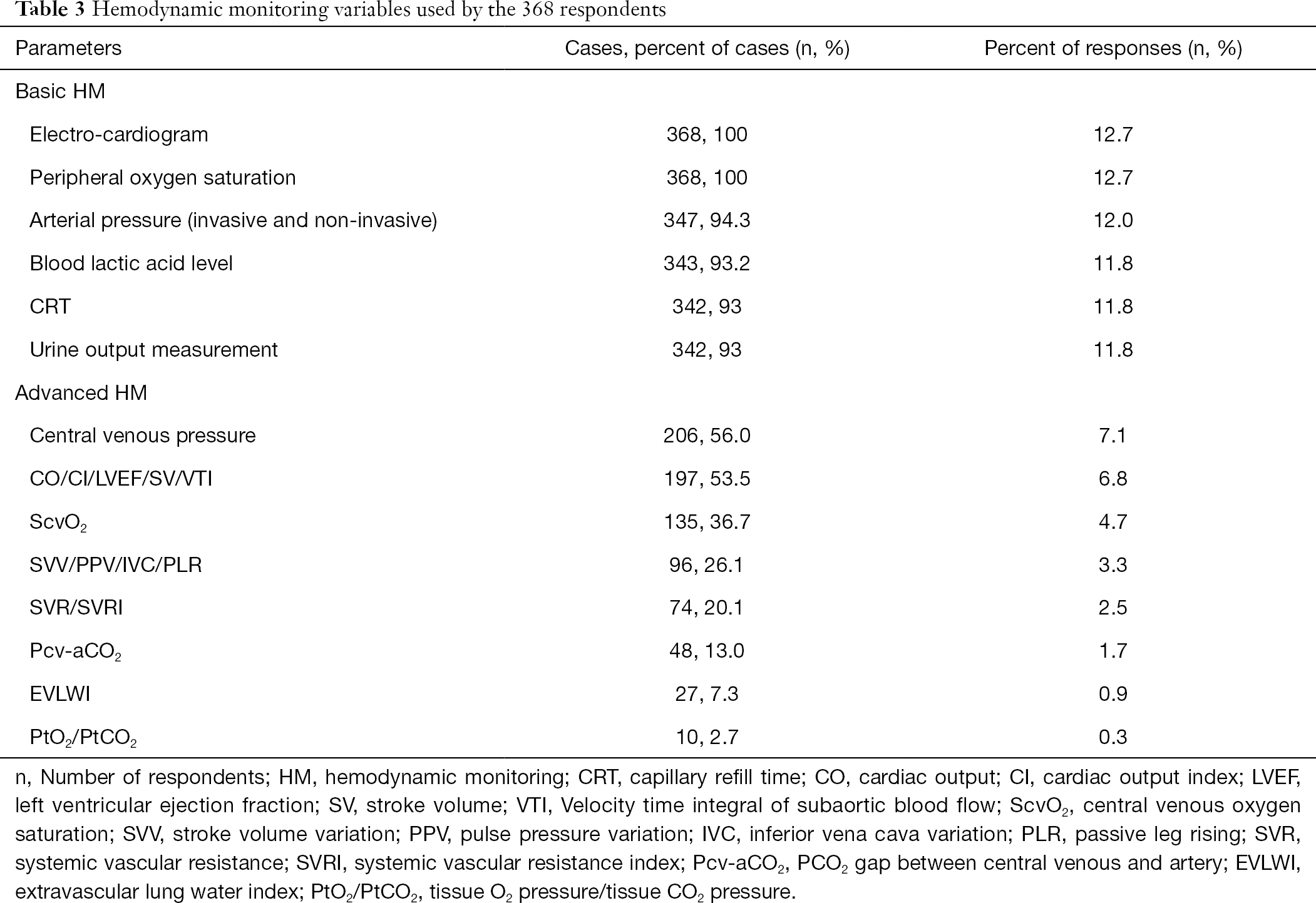 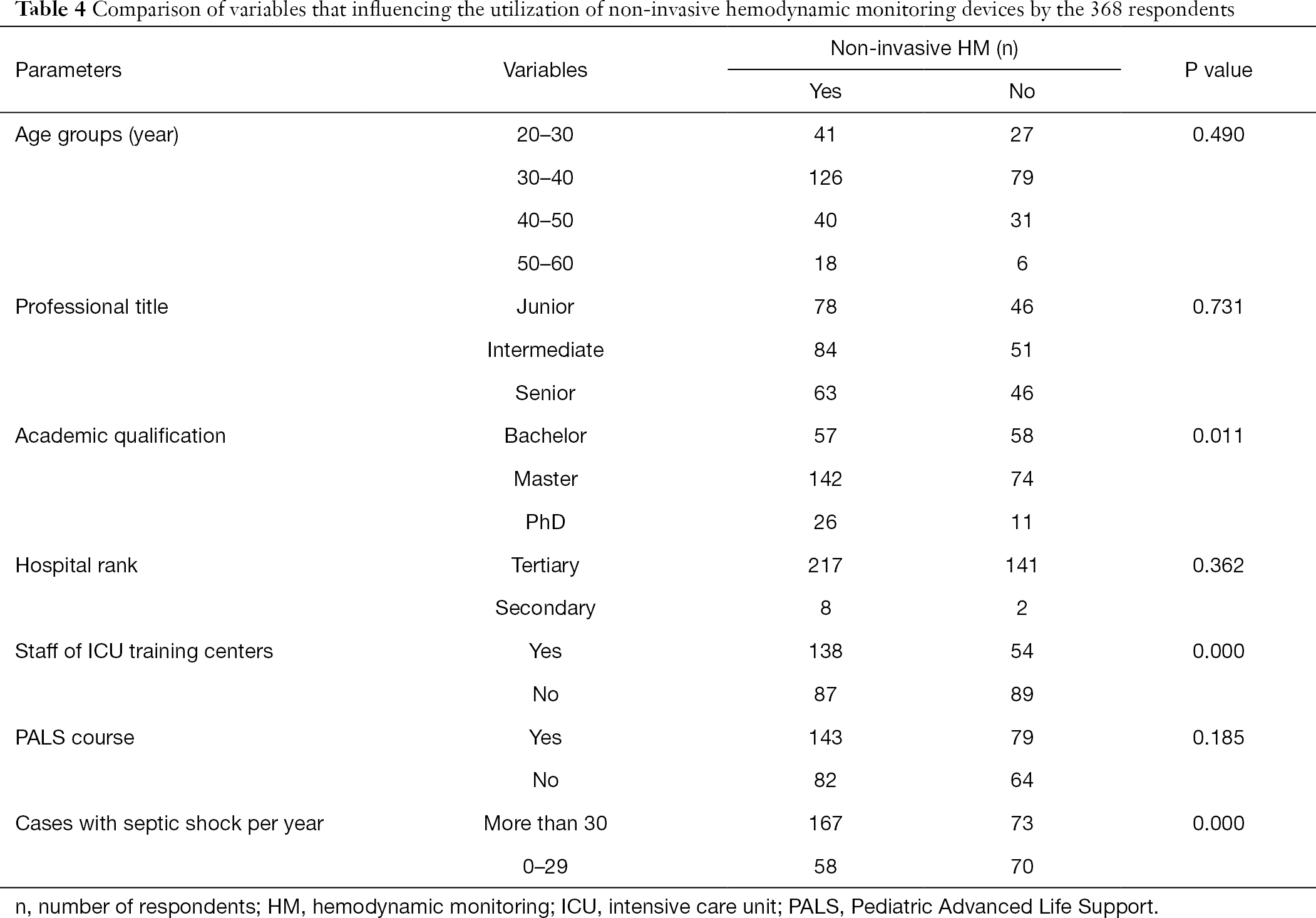 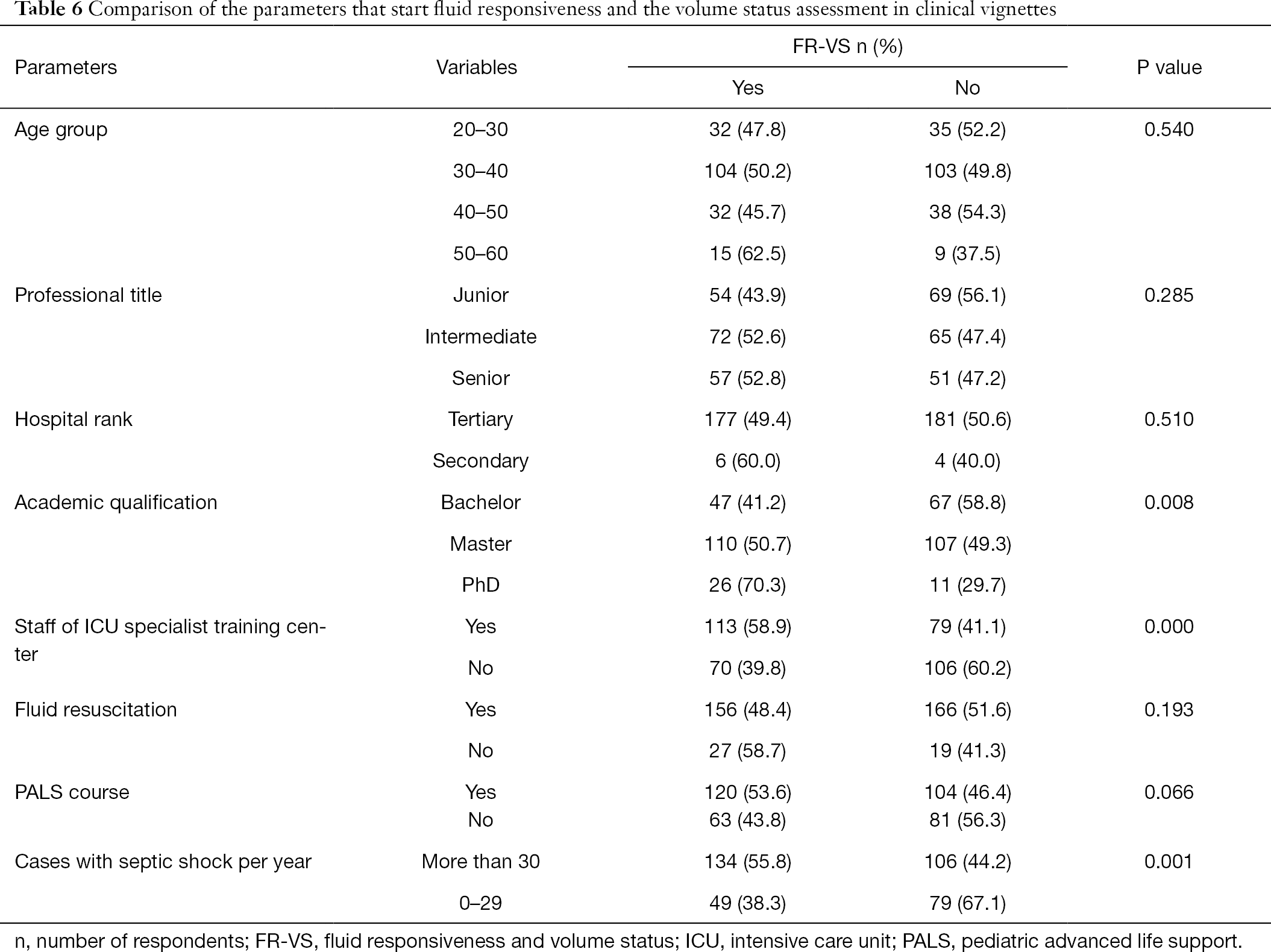 Based on E-mail survey, this study evaluated the practice regarding basic and advanced HM and management in children with septic shock in China.

With no doubt, the survey showed that almost every patient with septic shock performed basic HM, which was similar to the study by Saugel et al. (19) and Funcke et al. (7). It is encouraging to note that the proportion of urine output measurement (81.6%) in 1-hour in our survey was significantly higher than that (68.1%) in the survey conducted from May 2011 to January 2012 in three PICUs of tertiary teaching hospitals in Shanghai, China (20).

Extended HM parameters and in particular monitoring of cardiac output (CO/CI/LVEF/SV/VTI) and ScvO2, were used all over in less than 50% of the respondents, which was similar to that in Saugel’s and Biancofiore’s studies (9,19), but higher than that in Funcke’s report (only 24% of all ICU patients’ CO monitoring based on individual patient data) (7). These findings might indicate that the pediatricians in our survey (mainly pediatric intensivists as primary specialty), compared with the anesthesiologists in the study of Funcke et al. (7), performed CO/CI/LVEF/SV/VTI monitoring more often, or that the answers given by the pediatricians in our survey (that was not based on individual patient data) overestimate the actual proportion of patients undergoing CO monitoring.

Less than 5% of the respondents reported using advanced hemodynamic variables of microcirculation, such as PtO2 and PtCO2, which was similar to the study of Funcke et al. (7). Whether the low frequency of use was caused by a lack of confidence in monitoring accuracy or by other reasons (for example cognitive, economic) was beyond the scope of the survey.

In our survey CVP was used for preload monitoring in almost half of the respondents and the use of volumetric or dynamic parameters of preload was infrequent (25% of the respondents), which was similar with earlier data from Funcke et al., Cecconi et al. and Preau et al. (7,11,14). However, the poor use of these predictive indices observed in our survey was in contrast with their frequent use (49.7%) in the clinical case vignette, with the major limitation inherent to studies collecting declarative data. In addition, the significant use limitation of some parameters such as PLR in children may also account for the low frequency of use. This also illustrated the gap among theoretical, physiological knowledge and routine practice (15).

The most frequent invasive extended hemodynamic technology was transpulmonary thermodilution (21), however, the actual use of this monitoring modality for fluid therapy in the clinical case vignette with septic shock was comparably low (6.3% of respondents) in our study. In contrast, non-invasive HM devices were frequently used (61.1% of respondents reported using in their hospitals and 49.7% of respondents reported using in the clinical case vignettes), which was similar to the earlier data from Italian (9). Bedside transthoracic echocardiography led by intensivists was the most commonly used device in the survey. Our study suggests that there may be an increasing awareness and acceptance of non-invasive HM in pediatric intensive care medicine (outside cardiac surgery) in China. However, several studies have reported the gap between the high availability (7,11,15) or the strong recommendations (22,23) of noninvasive HM and their actual low clinical use in patients, which were out of our declarative data description. Of note, there were obviously differences between staff of ICU training centers and sepsis numbers per year regarding utilization of these noninvasive technologies in this survey. Our survey may suggest that professional training platform and the number of septic shock admission per year were major factors in the introduction and use of new technologies. Boulain et al. (15) also had reported the between-center heterogeneity in HM in 19 French ICU.

Clinical case vignettes were designed to indirectly assess the practical application of advanced HM in the respondents. The survey found that FR-VS assessment was not related to the volume expansion decision, although staff in training centers and highly educated individuals tended to assess the hemodynamics. Cecconi et al. (11) reported that patients in the FENICE Study received further fluids despite no response to the initial fluid challenge. Preau et al. (14) reported that dynamic parameters were often incorrectly used in the presence of contraindications in six French ICU. Those findings highlight the great variability in fluid management in critically ill patients, the gap in integrating different hemodynamic variables into management decisions, and the importance of continuing education and training of advanced HM at different levels and in different ways (13,16).

Our study has several strengths. We received responses from multiple different regions in China, ranging from high-income to lower middle-income regions. Respondents were PICU specialists at different professional title and academic qualification, and mainly working in tertiary hospitals.

Our survey has the limitations of being addressed only to the members of Association of Pediatric Intensivists who responded in a limited number. Therefore, it may only mirror the attitude and practice of Chinese pediatric intensivists in using HM to a certain extent. It is also possible that there was a selection bias, as pediatricians interested in hemodynamics may have greater tendency to being willing to answer the questionnaire. We were unable to determine causality or potential direction of effect for the associations observed through an email-based survey. Second, even if we consider that our survey results represent the actual practice of HM in critically ill children in China three years ago, but the knowledge and education of advanced HM, especially non-invasive HM, have been greatly improved in pediatrics in recent years. Third, to describe the degree of the simulated management of HM, a simple method (case vignette) was used to assess the consensus on clinicians’ practices. Finally, given the inherent flaws in self-reported survey research, the gap between perception of practice and the real-life practice at the bedside may be significant. A multicenter study either prospective or retrospective data review would be a stronger study to find out an actual prevalence of these monitoring in real practice scenarios.

In conclusion, there was a large variability in use advanced HM parameters. Almost half of the respondents reported to use advanced HM such as CVP, cardiac output indicators (CO/CI/LVEF/SV/VTI) and ScvO2, but the use of volumetric or dynamic indices of preload and microcirculation was infrequent in our study. There was a growing awareness and acceptance of non-invasive HM, but FR-VS assessment was not related to volume expansion decision. There was a potential need for hemodynamic education and training in pediatric intensive care medicine (outside cardiac surgery) in China.

Reporting Checklist: The authors have completed the STROBE reporting checklist. Available at http://dx.doi.org/10.21037/tp-20-374

Conflicts of Interest: All authors have completed the ICMJE uniform disclosure form (available at http://dx.doi.org/10.21037/tp-20-374). The authors have no conflicts of interest to declare.

Ethical Statement: The authors are accountable for all aspects of the work in ensuring that questions related to the accuracy or integrity of any part of the work are appropriately investigated and resolved. The study was conducted in accordance with the Declaration of Helsinki (as revised in 2013). The study was approved by the sub-association of pediatric intensive care physicians, Chinese Medical Doctor Association and Shanghai Children’s Medical Center (No. SCMCIRB-K2015039) and individual consent for this study was waived.