The incidence of the E2A-HLF fusion gene in ALL is approximately 1% and is caused by the t(17;19)(q22;p13) translocation to form a mutant fusion protein that is thought to play a role in pathogenesis (1,2). Moreover, this gene was identified as a poor prognostic indicator in B-ALL patients (3,4). Glover et al. reported a patient who benefited from dasatinib combined with chemotherapy (5). Fischer and Frismantas held the view that venetoclax was an effective inhibitor to cure this disease (6,7). In addition, a report showed that haploidentical transplantation followed by intensive donor lymphocyte infusions (DLIs) led to remission in a patient (8). However, CAR-T cell therapy applied in this kind of disease has rarely been reported. In this report, we described 4 cases diagnosed with E2A-HLF-positive B-ALL that showed a rapid response to CAR-T cell therapy. We present the following cases in accordance with the AME Case Series Checklist (available at http://dx.doi.org/10.21037/tp-20-323).

All procedures performed in studies involving human participants were in accordance with the ethical standards of the institutional and/or national research committee(s) and with the Helsinki Declaration (as revised in 2013). Written informed consent was obtained from the patients’ parents/guardians. Four patients went to receive CAR-T cell therapy as a clinical trial which was approved by the ethics committee of Children’s Hospital of Soochow University [2016004].

This study is a case series. Four cases diagnosed with E2A-HLF fusion gene-positive B-ALL and treated with the CCCG-ALL-2015 protocol (9) based on high-risk stratification were retrospectively collected from Jun 2017 to May 2020 in Children’s Hospital of Soochow University.

Case 1 showed a poor response to the standard induction therapy of prednisolone, vincristine, cyclophosphamide, daunorubicin, and L-asparaginase (VDLD) with the CCCG-ALL 2015 protocol as the high-risk group (9). On day 19, the minimal residual disease (MRD) was 1.64×10-1 by flow cytometry. After consolidation therapy with cyclophosphamide, cytarabine, and mercaptopurine (CAM), the MRD was still 7.6×10-2 on day 46. Then, reinduction therapy was started with vincristine, mitoxantrone, and dexamethasone (MOP). Following this salvage therapy, bone marrow evaluation showed that the MRD was 3.2×10-1. Therefore, CAR-T cell therapy (1×107 cells/kg, infusion, 3 times, from himself) was complimented. There were no adverse reactions after the first two infusions, and only a mild fever was observed after the third time. After one week, bone marrow evaluation presented molecular-level remission, with an MRD less than 1×10-4. On day 40 after CAR-T cell therapy, the patient then received 5/10 mismatched haploidentical transplantation from his father on the basis of remission. Seven months later, the patient relapsed, with 65% blasts and 7.68×10-1 MRD. CAR-T cell therapy (1×107 cells/kg, infusion, from his father) was used again to ease the tumor burden. There were incidences of hypotension, chills, acute kidney injury and increased body temperature after CAR-T cell therapy. Tocilizumab, norepinephrine and continuous renal replacement were used to relieve these symptoms. Ten days later, he achieved remission, and then, umbilical cord blood transplantation was carried out. After successful transplantation, there was a time when molecular remission was achieved, but unfortunately, recurrence occurred again in the later stage, even combined with DLI, venetoclax and dasatinib therapy, and lung GVHD appeared after transplantation. Finally, the patient died of respiratory failure on day 570 after diagnosis.

Case 2 employed venetoclax orally following VDLD from the CCCG-ALL 2015 protocol. Bone evaluation on days 19 and 46 showed MRD levels of 3.09×10-1 and 3.82×10-3, respectively. CAR-T cell therapy (1×107 cells/kg, infusion, two doses, from himself) was used for reinduction, replacing any further intensive chemotherapy. No reaction was found following the first dose. Four days later, the second dose was employed, with resulting fever and hand tremble, but the symptoms disappeared with tocilizumab. The bone marrow was evaluated again one week later and showed fusion gene negativity and an MRD less than 1×10-4. On day 60 after CAR-T cell therapy, the patient was given HSCT, and his father was the donor with HLA 7/10 matched. The treatment succeeded, and the patient has survived for 110 days since diagnosis.

Case 3 was treated with the CCCG-ALL-2015 protocol as well. The MRD was 1.69×10-2 and 1.04×10-2 on days 19 and 46, respectively. The E2A-HLF fusion gene was still positive. The patient was treated with CAR-T cell therapy (1×107 cells/kg, infusion, from himself) instead of consolidation chemotherapy. CRS with fever, hypotension and capillary leak syndrome and CRE with seizures and encephaledema occurred after therapy. Symptoms disappeared with effective intensive care. The bone marrow was showed that the patient achieved CR at day 7 after CAR-T cell therapy. To date, he has survived for 240 days since diagnosis.

Case 4 was enrolled in the same protocol. VDLD was conducted two weeks later because of disseminated intravascular coagulation recurrence. The MRD was less than 1×10-4 after induction therapy and remained negative after consolidation chemotherapy with CAM and high-dose MTX. Unfortunately, on day 177 of the maintenance treatment phase, although the MRD was less than 1×10-4, the fusion gene turned positive, with elevated blasts. The patient was given reinduction therapy with cyclophosphamide, idarubicin, vindesine and dexamethasone (CIOP) and reconsolidation therapy with CAM. However, the MRD was still at a high level (1.1×10-3). The patient was given CAR-T cell therapy (5×106 cells/kg, twice, infusion, from himself), and at day 14, the MRD and fusion gene turned negative again. On day 70 after CAR-T cell therapy, the disease relapsed and failed to be treated with vindesine, idarubicin, cyclophosphamide, L-asparaginase, and dexamethasone (VDCLP). The patient survived for 378 days after CAR-T cell therapy and died of resistant disease. 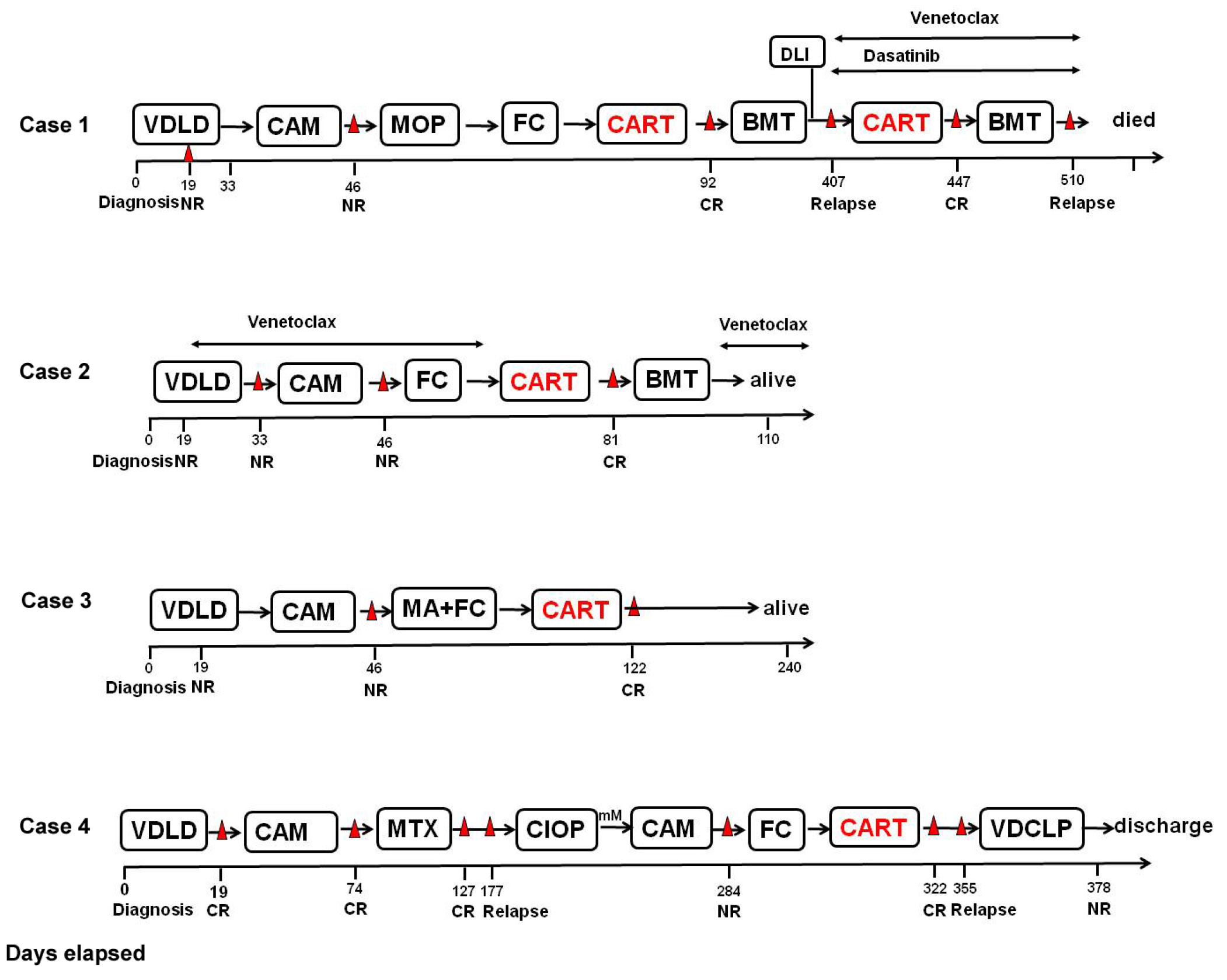 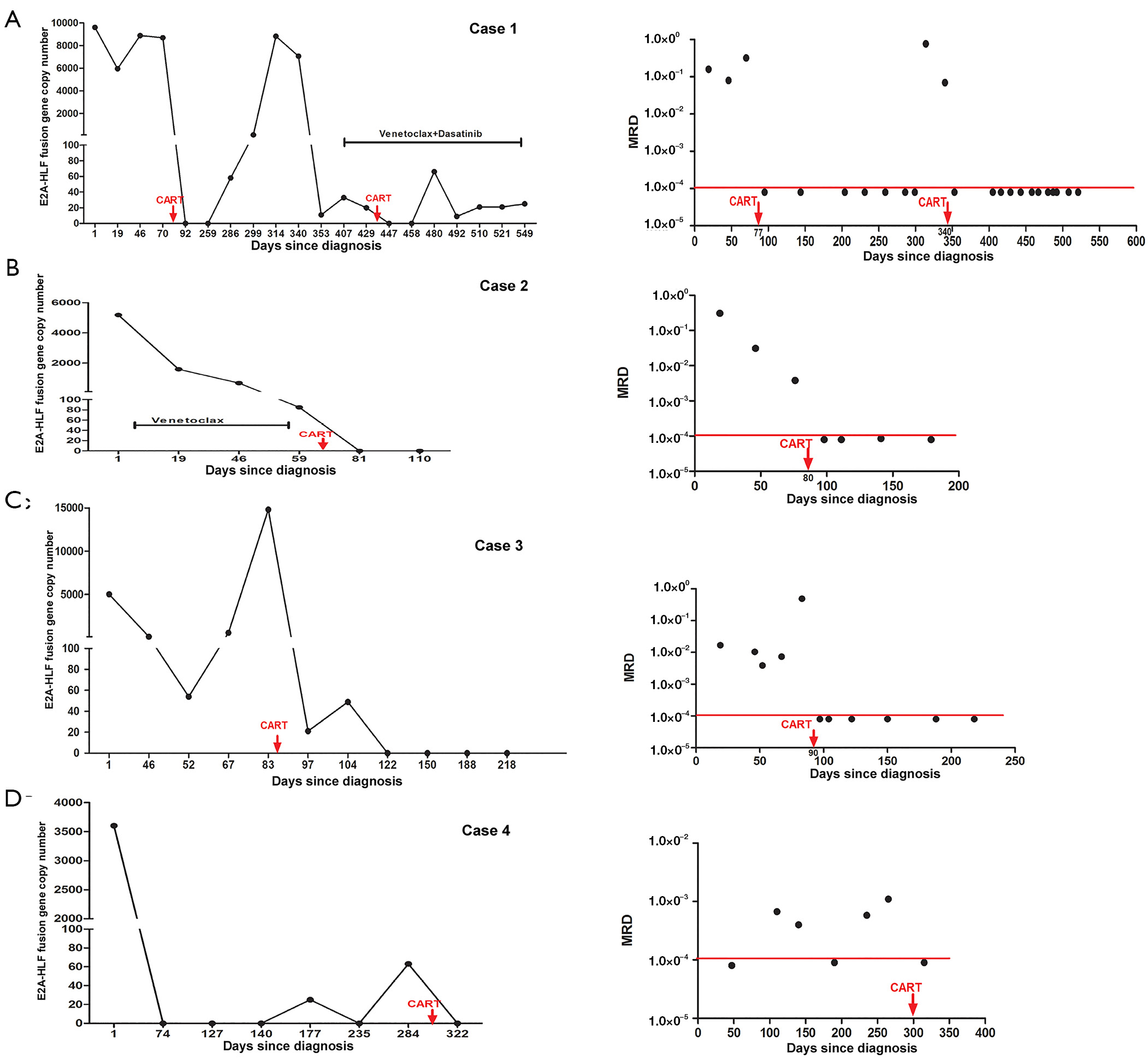 The four cases were diagnosed with E2A-HLF fusion gene-positive B-ALL and treated with the CCCG-ALL-2015 protocol based on high-risk stratification. Overall, 3 of 4 patients did not achieve effective molecular remission with conventional chemotherapy and inhibitors, but they all achieved complete remission at the molecular level with CAR-T cell therapy regardless of primary resistance or recurrence. One patient (Case 3) did not obtain remission by induction and consolidation therapy, but he achieved molecular remission after CAR-T cell therapy, with 4 months of disease-free survival, which indicated the efficacy of CAR-T cell therapy (10). This was the first successful case in which remission was achieved only via this remedy. Another patient (Case 2), who first adopted conventional chemotherapeutics combined with venetoclax, was not cured, which was in contrast with previous studies (6,7,11). Fischer et al. reported that such patients were sensitive to anthracyclines, glucocorticoids and venetoclax through drug sensitivity (7). Jason et al. also found that dasatinib combined with intravenous chemotherapeutics resulted in a patient achieving 9 years of disease-free survival, which suggested that dasatinib may be beneficial (5). In addition, DLI is regarded as an effective treatment (8). However, for Case 1, although the patient endured all these therapies, unfortunately, he did not obtain a good outcome. Although remission was initially achieved for Case 4, chemotherapeutic therapy was not sensitive after recurrence. However, CAR-T cell therapy gave him the chance to obtain complement remission again.

Currently, CAR-T cell therapy has been successfully applied to treat relapsed/refractory disease (12). However, the use of this therapy in B-ALL with t(17;19)(q22;p13) translocation has rarely been reported. It is well known that this kind of disease has a poor outcome because of its high resistance to chemotherapeutics, inhibitors and even HSCT. Compared to chemotherapy, CAR-T cell therapy has shown remarkable activity against B-ALL, with high complete response rates and controlled CRS and CRE, which resembled the results of previous reports of adult and pediatric ALL patients (10,13). However, the limitation of this study is that we only have four cases and more samples should be analyzed in further to validate this conclusion.

CAR-T cell therapy used for E2A-HLF fusion gene-positive ALL proved to be a promising therapy, and this targeted immune therapy should be considered in such patients.

Conflicts of Interest: All authors have completed the ICMJE uniform disclosure form (available at http://dx.doi.org/10.21037/tp-20-323). The authors have no conflicts of interest to declare.

Ethical Statement: The authors are accountable for all aspects of the work in ensuring that questions related to the accuracy or integrity of any part of the work are appropriately investigated and resolved. All procedures performed in studies involving human participants were in accordance with the ethical standards of the institutional and/or national research committee(s) and with the Helsinki Declaration (as revised in 2013). Written informed consent was obtained from the patients’ parents/guardians.