KRAS gene polymorphisms are associated with the risk of glioma: a two-center case-control study

Glioma is the most common primary brain tumor in adults, accounting for more than two-thirds of all cases of primary malignant brain tumors (1). Approximate 200,000 patients worldwide are diagnosed with glioma annually, nearly 50% of the cases occurring between the ages of 40 and 60 (2-5). Studies have suggested that glioma originates from glial stem cells and progenitor cells (6). Gliomas can be classified into astrocytoma, oligodendroglioma, oligoastrocytoma, and ependymoma according to the origin of tissue cells (7,8). Mortality for glioma patients remains high despite advances in the treatment of gliomas such as radiation, chemotherapy, and surgery (9). The survival rates are about 14 months for high-grade glioma (III, IV) (10) and about 5 years for low-grade glioma (I, II) (11,12).

The formation and development of glioma is a complex process caused by abnormal genetic changes or epigenetic abnormalities (13). The etiology of glioma has been partially elucidated but remains unclear (14-17). With the progress of genomic association research and other technologies, genetic mutation has attracted more and more attention as the cause of glioma formation. Many genes have been identified to play a key role in the carcinogenesis of gliomas, such as MDM2, CDKN2A/ARF, RB, PTEN, MET, and EGFR (11,18). A group of miRNAs involved in glioma initiation by targeting RAS gene were also identified (19,20).

RAS gene which consists of KRAS, NRAS, and HRAS, is one of the most frequently activated oncogenes in human cancers. KRAS is the predominant mutated RAS gene in cancers (84% of all RAS missense mutations), followed by NRAS (12%), with HRAS rarely mutated (4%) (21). Ras has the activity of GTP enzyme, which can hydrolyze GTP to GTP (22,23). KRAS (Kirsten rat sarcoma 2 viral oncogene homolog) gene is a proto-oncogene that encodes a small GTPase transductor protein called KRAS. KRAS belongs to a group of small guanosine triphosphate (GTP) binding proteins, known as RAS superfamily or RAS-like GTPases (24). KRAS is of vital importance in the RAS gene because its mutation frequency is much higher than HRAS and NRAS (25). NRAS encodes the widely expressed small GTPase NRAS, which acts as a membrane-associated molecular switch in the RAS-MAPK pathway (26). The mutation frequency of NRAS ranks the second in the RAS gene. Q61K mutation is the most important one that is often associated with melanoma, thyroid cancer, and ovarian tumor (27). HRAS mutations, however, are the least, accounting for less than 1% of all RAS mutations. HRAS was the only oncoprotein that was significantly expressed in medullary thyroid tumor, head and neck cancer, and bladder cancer (28,29). More and more studies have shown that the RAS gene is associated with a variety of cancers. Pediatric low-grade gliomas are frequently driven by genetic alterations in the RAS/MAPK pathway (30). The genomic landscape of high-grade gliomas described from 118 pediatric patients revealed activation of the RTK/RAS/PI3K pathway in 67% of non-brain stem high-grade gliomas and 69% of diffuse intrinsic pontine gliomas (31). However, the relationship between RAS gene polymorphism and glioma has not been reported. Characterizing the role of RAS gene polymorphisms on the risk of glioma not only helps to demonstrate the specific role of RAS gene in specific cancer, but also sheds some light to the etiology of glioma. Therefore, in this study, we analyzed the relationship between NRAS and KRAS gene polymorphisms and glioma susceptibility.

We present the following article in accordance with the STROBE reporting checklist (available at http://dx.doi.org/10.21037/tp-20-359).

The current study was a two-center case-control study. The study population consisted of 191 glioma patients and 248 cancer-free controls. The subjects were all Han Chinese from southern China and were not of any blood relationship. Cases were defined by a confirmed diagnosis of glioma by histopathology. Controls were collected in the same geographical region (Guangzhou and Wenzhou) as the cases during the same period. All procedures performed in this study involving human participants were by the Declaration of Helsinki (as revised in 2013). This study was approved by the Institutional Review Committee of Guangzhou Women and Children Medical Center (No. 2016021650). Written consent was obtained from the participants’ parents or their legal guardian.

We selected four potential functional polymorphisms in KRAS and NRAS genes from the NCBI dbSNP database (http://www.ncbi.nlm.nih.gov/projects/SNP)and SNPinfo (http://snpinfo.niehs.nih.gov/snpfunc.htm). The genomic DNA kit (TianGen Biotech Co. Ltd., Beijing, China) was used for DNA extraction. Genomic DNA was extracted from the peripheral venous blood by subjects. Concentration of DNA was determined using the NanoDrop ND-1000 Spectrophotometer. Genotyping of NRAS and KRAS polymorphisms was performed using the TaqMan real-time PCR in a blind method by a 7900 Sequence Detection system (Thermo Fisher Scientific, Waltham, MA, USA) (32-34). The conditions of reactions were set as follow: pre-read stage at 60 °C for 30 seconds, holding stage at 95 °C 10 minutes, repeated 45 cycles each of denaturation at 95 °C for 15 seconds, annealing and extension at 60 °C for 1 minute. Genotyping was also performed on 10% of randomly selected samples to ensure genotyping accuracy. The results were 100% consistent with the original genotype.

A two-sided χ2 test was used to examine the demographic characteristics and genotype frequency distribution in patients and controls. The goodness-of-fit χ2 test was performed to evaluate the deviations from Hardy-Weinberg equilibrium (HWE) in selected polymorphisms in controls. To estimate the association between glioma risk and RAS polymorphisms, we calculated the odds ratios (ORs) and 95% confidence intervals (CIs) from the logistic regression analysis. SAS 9.1 (SAS Institute, Cary, NC, USA) was used to complete statistical analyses. The difference was considered statistically significant when P<0.05.

Association between glioma risk and NRAS and KRAS polymorphisms 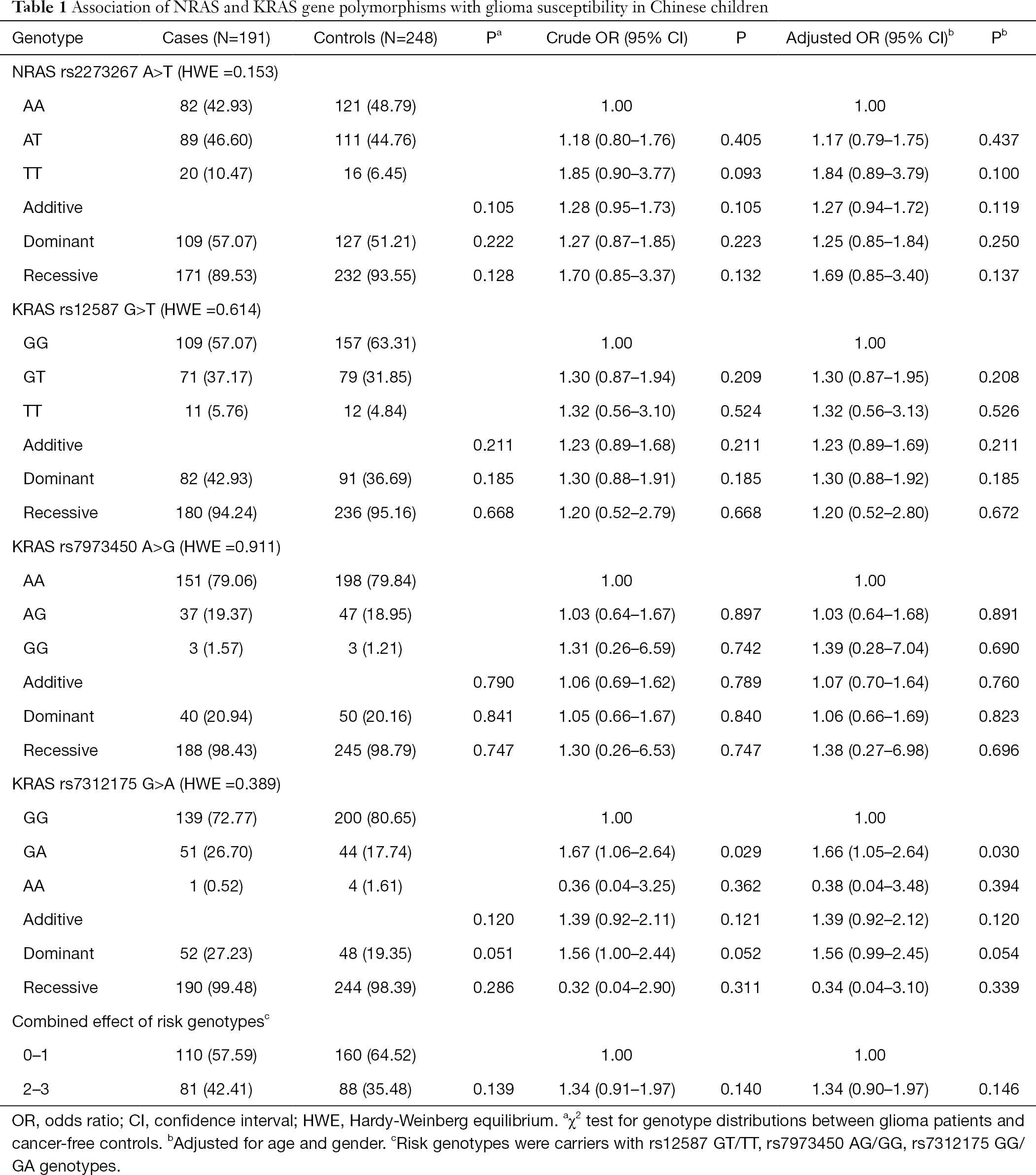 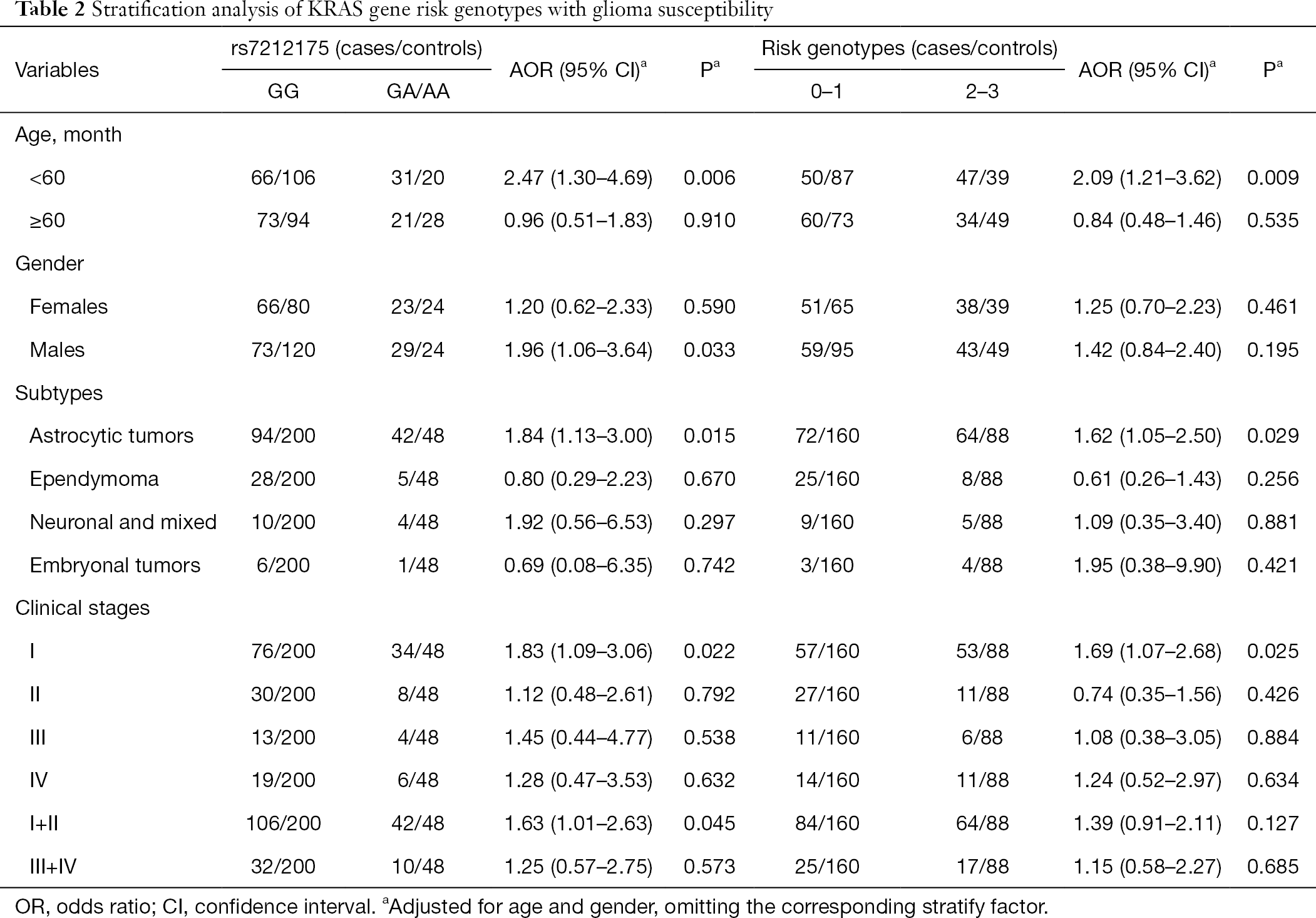 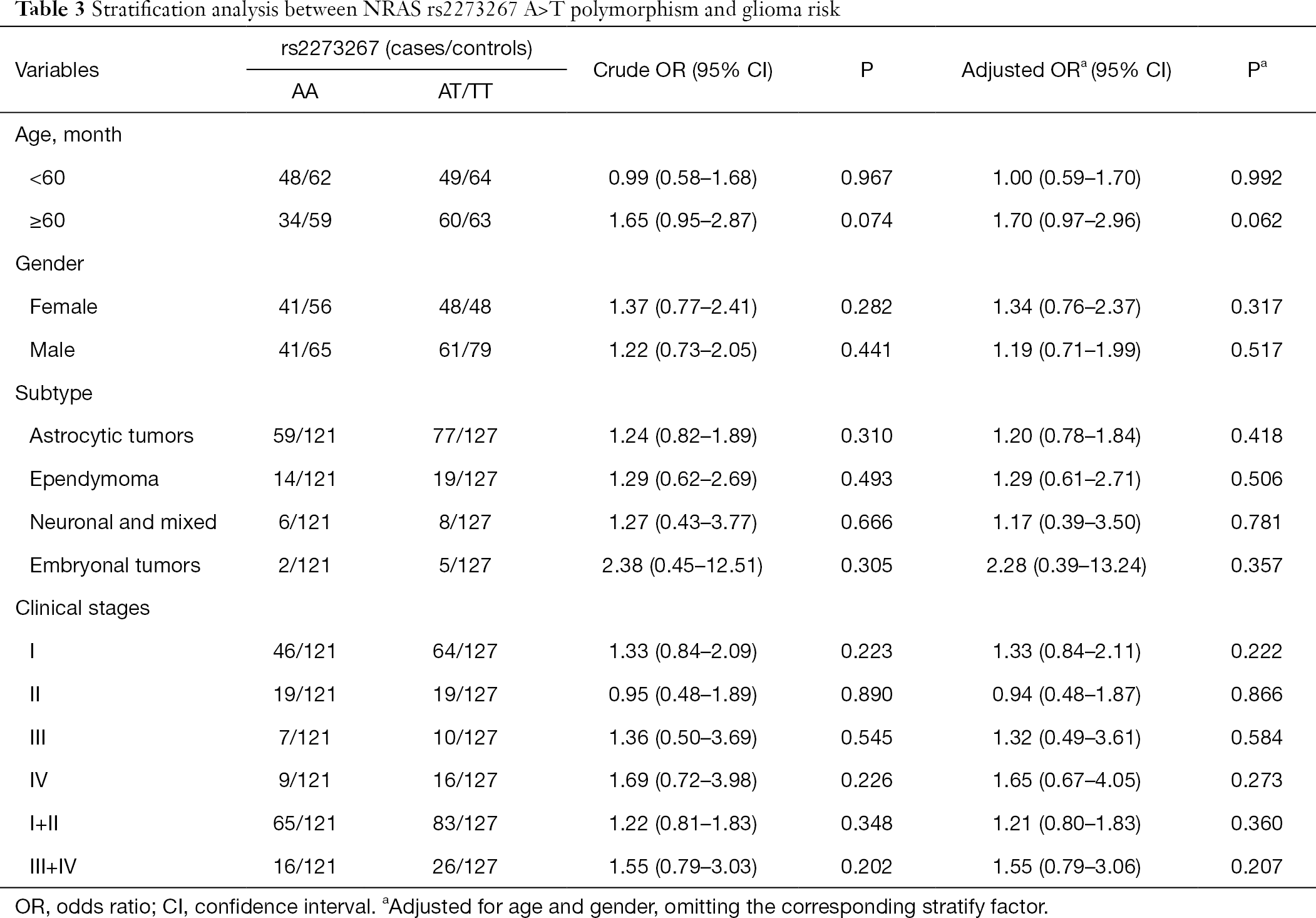 Glioma is an extremely malignant tumor that accounts for the majority of intracranial tumors and has a high recurrence rate and mortality rate (35). To better understand the pathogenesis of glioma, improve the survival rate, and reduce the mortality rate in patients, we conducted this study to determine the relationship between KRAS and NRAS gene SNPs and glioma susceptibility. The results showed that KRAS gene rs7312175 G>A was significantly correlated with glioma susceptibility.

Our previous study investigated the relationship between KRAS/NRAS gene polymorphisms and the risk of pediatric tumors. We found that KRAS/NRAS polymorphisms are irrelevant to hepatoblastoma susceptibility in Chinese population (23), while KRAS rs12587 G>T was significantly associated with the susceptibility to nephroblastoma (29). In this study, we are the first to investigate the relationship between KRAS/NRAS gene SNPs and glioma susceptibility. In the four SNPs analyzed, KRAS rs7312175 G>A is associated with the risk of glioma, while NRAS rs2273267 A>T, KRAS rs12587 G>T, KRAS rs7973450 A>G are not associated with glioma risk. Stratified analysis showed that individuals harboring the rs7312175 GA alleles were more likely to develop glioma in the following subgroups: children less than 60 months, male, tumorous subtypes were astrocytic tumors and clinical stages I.

Although this study verified the correlation between the KRAS gene SNPs and glioma risk to some extent and obtained positive results, there were still some deficiencies. Firstly, the sample size was small. Secondly, the subjects of this study were all Han people, which could not be applied to other non-Han people. Besides, only 4 gene polymorphisms were considered, and environmental exposure factors were not considered. Of note, in the current study, the HRAS gene SNPs were not included. More SNPs are warranted to be analyzed in the future.

In conclusion, we demonstrated that KRAS rs7312175 G>A polymorphism was significantly associated with the risk of glioma. This study has a certain significance for the better understanding of glioma. The SNP identified here may be used for the diagnosis and treatment of the disease to improve the survival rate of glioma patients.

Reporting Checklist: The authors have completed the STROBE reporting checklist. Available at http://dx.doi.org/10.21037/tp-20-359

Conflicts of Interest: All authors have completed the ICMJE uniform disclosure form (available at http://dx.doi.org/10.21037/tp-20-359). The authors have no conflicts of interest to declare.

Ethical Statement: The authors are accountable for all aspects of the work in ensuring that questions related to the accuracy or integrity of any part of the work are appropriately investigated and resolved. All procedures performed in this study involving human participants were by the Declaration of Helsinki (as revised in 2013). Our study design received approval from institutional review board of Guangzhou Women and Children’s Medical Center (No. 2016021650). Written informed consent was acquired from the parents or guardians of each participant.