Translation and validation of the Chinese version of Brace Questionnaire (BrQ)

Adolescent idiopathic scoliosis (AIS) is the most common form of spinal deformity, with a prevalence of 1% to 2% (1). It has been reported to negatively affect a patient’s health-related quality of life (HRQoL), with complaints of increased back pain, reduced physical activity, and psycho-social problems associated with a disfigured appearance (2,3). Bracing represents the primary form of non-operative management of AIS (4). While most studies suggested its effectiveness, this modality has itself been reported to result in a deterioration of HRQoL among patients who receive bracing treatment (3). Therefore, close monitoring of HRQoL should be performed while under treatment and the impact of bracing on HRQoL should be accounted for in the evaluation of treatment results of AIS patients (5).

Among HRQoL assessment tools dedicated to patients with AIS, the Scoliosis Research Society-22 Questionnaire (SRS-22) is the most widely used (6). However, SRS-22 does not include items specific to the impact of bracing on HRQoL of AIS patients (3). A disease-specific questionnaire (7-9) with proven higher sensitivity than generic patient-oriented counterparts is required (10). To specifically evaluate the HRQoL of AIS patients under bracing treatment, Vasiliadis et al. (11) first introduced the Brace Questionnaire (BrQ), which included eight domains (general health perception, physical functioning, emotional functioning, self-esteem and aesthetics, vitality, school activity, bodily pain and social functioning).

The BrQ was initially developed and validated in Greek, and has been translated into Polish (12), Italian (13), French (14), Korean (15), Turkish (16), and Persian (17) and found to be valid. We herein aimed to culturally adapt and psychometrically validate the contemporary Chinese version of BrQ following the standard protocol of trans-cultural validation as demonstrated in previous literature (18).

In general, we strictly followed the widely accepted guidelines for translation and cross-cultural adaptation as described by Guillemin (6,18), including independent forward translation, review and reconciliation of differences, reverse translation and establishment of the consensus-based pre-final version by an expert panel.

The pre-final version of Chinese BrQ was presented to 10 Chinese-speaking AIS patients, who were subsequently interviewed on their understanding of each questionnaire item. Each patient was asked to comment on the pre-final version of Chinese-translation of BrQ and to identify any words that they found difficult to understand. Thereafter, their responses were reviewed by the expert panel and the final Chinese version of BrQ was determined by consensus.

We then administered BrQ to 70 consecutive Chinese patients with AIS. Inclusion criteria included age at the time of questionnaire administration between 10 and 18 years, Cobb angle of the primary curve on long-cassette antero-lateral X-ray between 20.0° and 40.0°. All patients were treated with the same kind of brace for at least 4 months and for at least 10 hours per day. The study was conducted in accordance with the Declaration of Helsinki (as revised in 2013) and the study was approved by the Ethics Committee of Peking University Third Hospital (No. M2018216) and informed consent was taken from all the patients.

The BrQ comprises of 34 Likert-scale items in eight specific domains: (I) general health perception, (II) physical functioning, (III) emotional functioning, (IV) self-esteem and aesthetics, (V) vitality, (VI) school activity, (VII) bodily pain and (VIII) social functioning. The total score equals the average of each item score multiplied by 20. Item score ranges from 1 to 5 points for each item, with more points indicating higher HRQoL. Therefore, the minimum score of BrQ was 20 and the maximum was 100. Similarly, a sub-scale score can be calculated for each of the eight domains by multiplying the average item score of all items within a certain domain by 20 (11).

The SRS-22 includes five domains (function, pain, mental health, self-image, management satisfaction/dissatisfaction), and a total of 22 items. The item score ranges from 1 to 5 points, and the summary score ranges between 22 and 110 (6). A previously-validated Chinese version of SRS-22 was used in the current study (19,20).

A test-retest design (with a 14-day interval between questionnaire administration) was used to measure the temporal stability of the Chinese version of BrQ using the intra-class correlation coefficient (ICC). The Cronbach’s alpha was used to assess internal consistency. The Pearson’s correlation coefficient was used to evaluate convergent validity by comparing the responses to BrQ against responses to SRS-22. SPSS 26.0 was used for statistical analysis. For all tests, statistical significance was set at P<0.05.

The study took place from February 2019 to January 2020 with the approval of the local hospital ethics committee. A total of 70 consecutive native Chinese-speaking patients with AIS, including 65 girls and 5 boys, were enrolled in this study after obtaining consent from patients and their guardians’ consent, and all of them completed the second survey. The mean patient age was 13.9 [standard deviation (SD), 2.1] years, and the mean Cobb angle was 28.0° (SD, 6.6). Demographics and clinical characteristics were summarized in Table 1.

The questionnaires had no missing values or patient information. Scores from the eight BrQ domains and the five SRS-22 domains were shown in Table 2, respectively, along with their ceiling and floor effects. There were no floor or ceiling effects observed with the total score of BrQ. However, significant ceiling effects were observed in the school activity (45.7%), bodily pain (35.7%), and social functioning (22.9%) domains of BrQ. 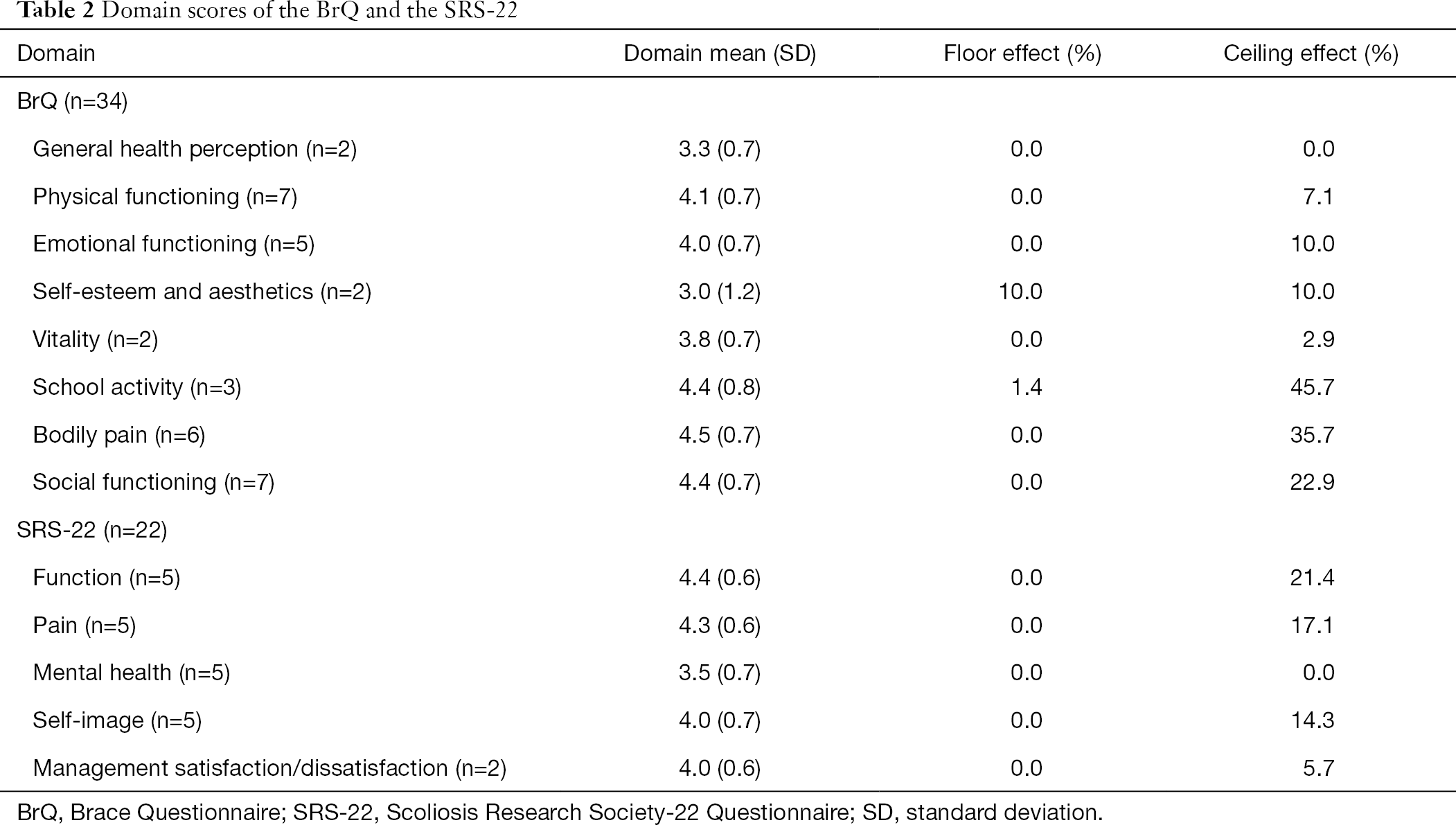 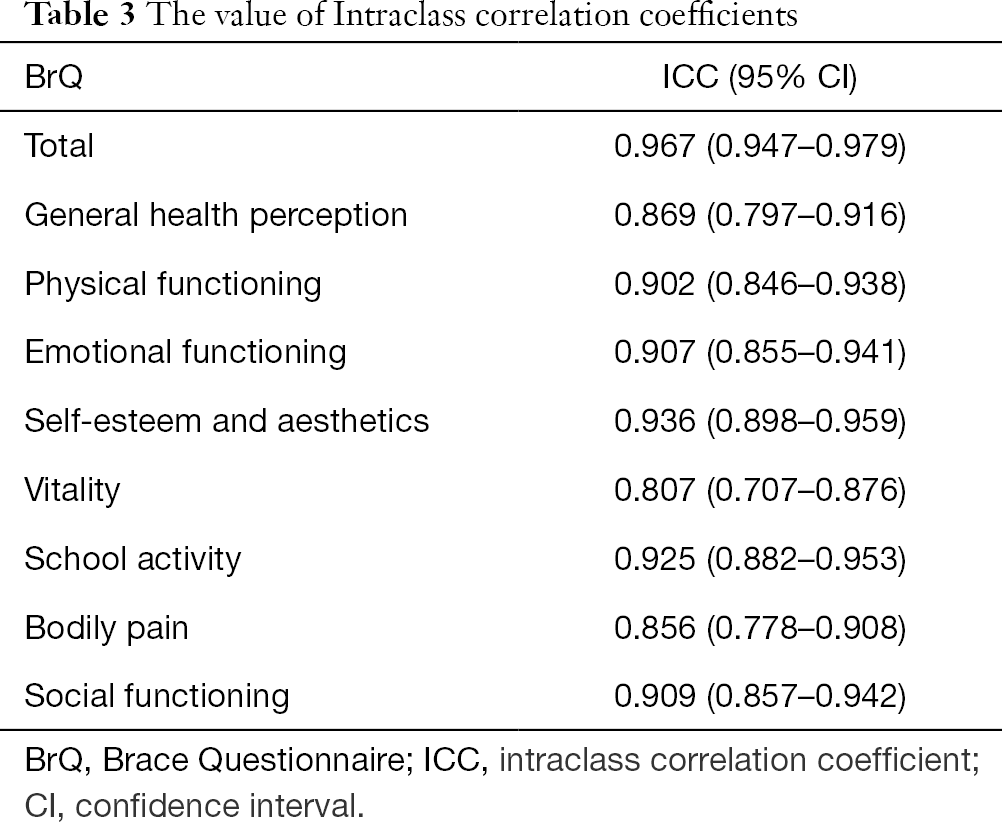 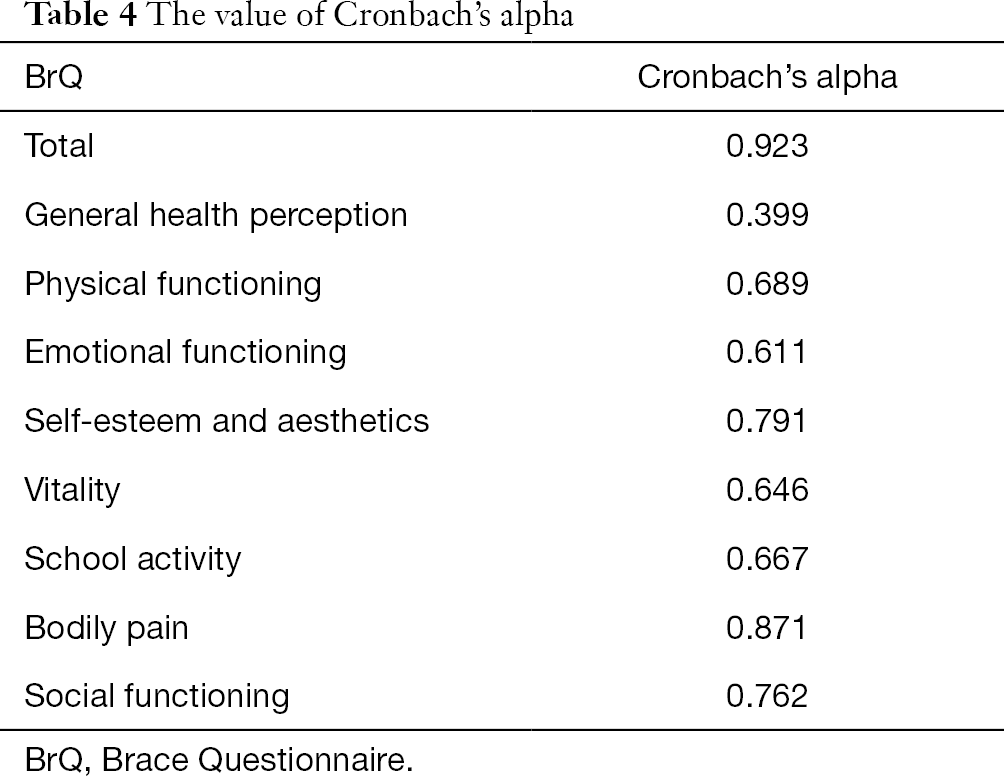 Regarding convergent validity, Pearson’s correlation coefficients varied from very weak to strong across different domains between BrQ and SRS-22 (Table 5). The overall BrQ and SRS-22 scores were strongly correlated with a coefficient of 0.743 (P<0.001).

Brace treatment has been used as the primary form of non-operative management of AIS. Many types of brace have been reported in the literature (4). Previous studies suggested that bracing may negatively affect HRQoL of AIS patients (5). On the other hand, declining HRQoL might compromise compliance with bracing and consequently compromise the effectiveness of this treatment modality (3). Therefore, it is important to better evaluate and closely monitor the HRQoL aspects of AIS patients undergoing bracing treatment. SRS-22 has been widely used as an assessment tool for patients with scoliosis (6). However, SRS-22 is not specific to bracing management. In contrast, BrQ was designed specifically for AIS patients wearing braces as their primary treatment modality. Since its publication in 2006, BrQ has undergone cross-cultural adaptation into multiple foreign languages (11-17). Our current study introduced the Chinese version of BrQ following standard protocols of translation and cultural adaptation, which can be used as a clinical evaluation tool for Chinese patients AIS. The culturally adapted Chinese version of BrQ showed good psychometric properties, largely comparable to those of the original Greek version and translated versions in other languages (Table 6).

Table 6 The results of every language version
Full table

In the present study, ceiling effects were observed in 3 domains of BrQ, namely, school activity, bodily pain, and social functioning. Yet the Korean version of BrQ revealed no ceiling effect in any domain (15). This discrepancy was likely due to the fact that Chinese patients stress the importance of adolescent education and seldomly delay going to school.

To conclude, the culturally adapted Chinese version of BrQ showed excellent reliability, high internal consistency, and satisfactory concurrent validity. This instrument is, therefore, useful as a clinical evaluation tool for Chinese patients with AIS. Further research may focus on whether BrQ can supplement SRS-22 or be used as a stand-alone assessment tool in this patient population in the future.

Funding: This work was supported by grants from the Young Scientists Fund of the National Natural Science Foundation of China (CN) (No. 2019NSFC81901822), Peking University Fund of Fostering Young Scholars’ Scientific & Technological Innovation (No. BMU2018PYB016) and Capital’s Funds for Health Improvement and Research (No. 2018-4-4097).

Conflicts of Interest: All authors have completed the ICMJE uniform disclosure form (available at http://dx.doi.org/10.21037/tp-20-377). The authors have no conflicts of interest to declare.

Ethical Statement: The authors are accountable for all aspects of the work in ensuring that questions related to the accuracy or integrity of any part of the work are appropriately investigated and resolved. The study was conducted in accordance with the Declaration of Helsinki (as revised in 2013). The study was approved by the Ethics Committee of Peking University Third Hospital (No. M2018216) and informed consent was taken from all the patients.