Sepsis refers to a life-threatening organ dysfunction caused by a host's dysregulation of infection. Currently, apart from life support therapy, the definitive therapy of sepsis is so limited that it is the leading cause of death in intensive care unit (ICU) (1,2). Immune disorder caused by malignant tumor, secondary immunodeficiency, or the use of immunosuppressants is increasingly common in ICU. In PICU, myelosuppression and neutropenia caused by chemotherapy of leukemia or other tumors increase the risk of infection and death in patients (3-5). Neutropenia has been proven to be an independent risk factor for sepsis (6,7). Patients with severe neutropenia have lower levels of neutrophils in the periphery. Since neutrophils mediate a variety of pathophysiological processes in sepsis, it is essential to understand whether severe sepsis/septic shock patients with severe neutropenia show distinct clinical and biomarker features.

Acute kidney injury (AKI) in ICU caused by sepsis is often treated by continuous renal replacement therapy (CRRT) in advanced stages (8). When severe sepsis patients get worse and have oxygenation disorders, airway protection and mechanical ventilation support are important treatment measures (9). The use of vasoactive drugs such as norepinephrine can help correct circulatory disorders and improve tissue perfusion in patients with sepsis (10). CRRT, ventilation and vasoactive drugs are important organ support methods, which reflect the dysfunction of main organs and indicate the severity of sepsis. The high level of CRP and PCT, as classic acute phase proteins during sepsis, is valuable for sepsis diagnosis (11,12). In this study, the cytokines were determined after our discussion, including interleukin (IL)-2, IL-6, tumor necrosis factor (TNF)-α, which are major pro- and anti-inflammatory cytokines and have been proven to reflect the severity and prognosis of sepsis (13-16). Regulatory T cells (Tregs) plays a role in maintaining the immunologic homeostasis and tolerance, so the percentage of Tregs reflects the immune status during sepsis (17,18). However, whether neutropenia is associated with distinct clinical and biomarker features in patients with severe sepsis remains unclear.

We aim to evaluate clinical and biomarker features in severe sepsis/septic shock children with severe neutropenia. This retrospective cohort study may provide a new perspective for clinical options in sepsis treatment.

We present the following article in accordance with the STROBE reporting checklist (available at http://dx.doi.org/10.21037/tp-20-230).

This retrospective cohort study enrolled 141 cases of patients (87 males and 54 females) from January 2015 through November 2019, and were hospitalized at Department of Pediatric Intensive Care Unit, Shanghai Children’s Medical Center, School of Medicine Affiliated to Shanghai Jiao Tong University. Inclusion criteria were as follow: aged from 1 month to 18 years old; diagnosed with severe sepsis or septic shock according to American College of Chest Physicians/Society of Critical Care Medicine consensus criteria (19); complicated with sepsis-induced organ dysfunction, tissue hypoperfusion or sepsis-induced hypotension. Patients who were diagnosed with hemophagocytic syndrome or received Chimeric Antigen Receptor T-Cell Immunotherapy (CAR-T) were excluded. The study was performed in accordance with the Declaration of Helsinki (2013 revision) and was approved by the Research Ethics Committee of the Shanghai Children’s Medical Center of Shanghai Jiao Tong University (Ethical code: SCMCIRBW2020049). Individual consent for this retrospective analysis was waived.

Severe neutropenia was defined as an absolute neutrophil count in peripheral blood less than 100/microliter on PICU admission (20). Research personnel had followed up the use of mechanical ventilation, vasoactive drugs and CRRT of the patients for 7 days from admission. Organ support treatment was given to the patients when they developed AKI, acute respiratory distress syndrome (ARDS), or severe circulatory disturbance. All medical decisions were made by experienced physicians. Mortality was defined at 28 days after admission.

Peripheral blood samples of all children were collected on the day of PICU admission. CRP and PCT were measured by enzyme-linked immunosorbent assays (ELISA). Cytokines, including IL-2, IL-4, IL-6, IL-10, TNF-α, IFN-γ, IL-17A were determined with cytometric bead array (CBA). Detection reagent was BDTM CBA human T helper cell 1/2 (Th1/Th2) cytokine kit II (BD Biosciences, San Jose, CA). Tregs were identified based on the expression of CD4, CD25 and CD127, and results were expressed as the proportion of the total number of lymphocytes.

Continuous data were expressed as median and range. Between groups, the differences were tested for significance using the Student’s t-test or Manne-Whitney U test. The enumeration data were expressed by rate. The Pearson’s chi-square test and Fisher’s exact test were used. It was considered to be statistically significant when a two-sided P value was smaller than 0.05. We also checked the correlation between severe neutropenia and the use of mechanical ventilation, vasoactive drugs, CRRT within 7 days after PICU admission and 28-day mortality using multivariable logistic regression. Possible confounders related to exposure or outcome were included in adjusted models, including age, male and severity of illness measured by Pediatric risk of mortality III (PRISM III) score. According to clinical experience and literature, incidence of the use of mechanical ventilation vasoactive drugs and CRRT is 37%. One hundred forty-one subjects were enrolled in the final analysis, we estimated 80% power to detect 10% difference in outcomes. Receiver operating characteristic curves (ROC curves) were applied to determine the sensitivities and specificities for biomarkers measurements in sepsis patients. The area under the curve and the optimal cut-off value were also calculated. The value of the cut-off point corresponding to the largest Youden’s index is used as cut off value. All statistical analyses were performed with SPSS software, version 20.0 (SPSS Inc., Chicago, IL, USA). 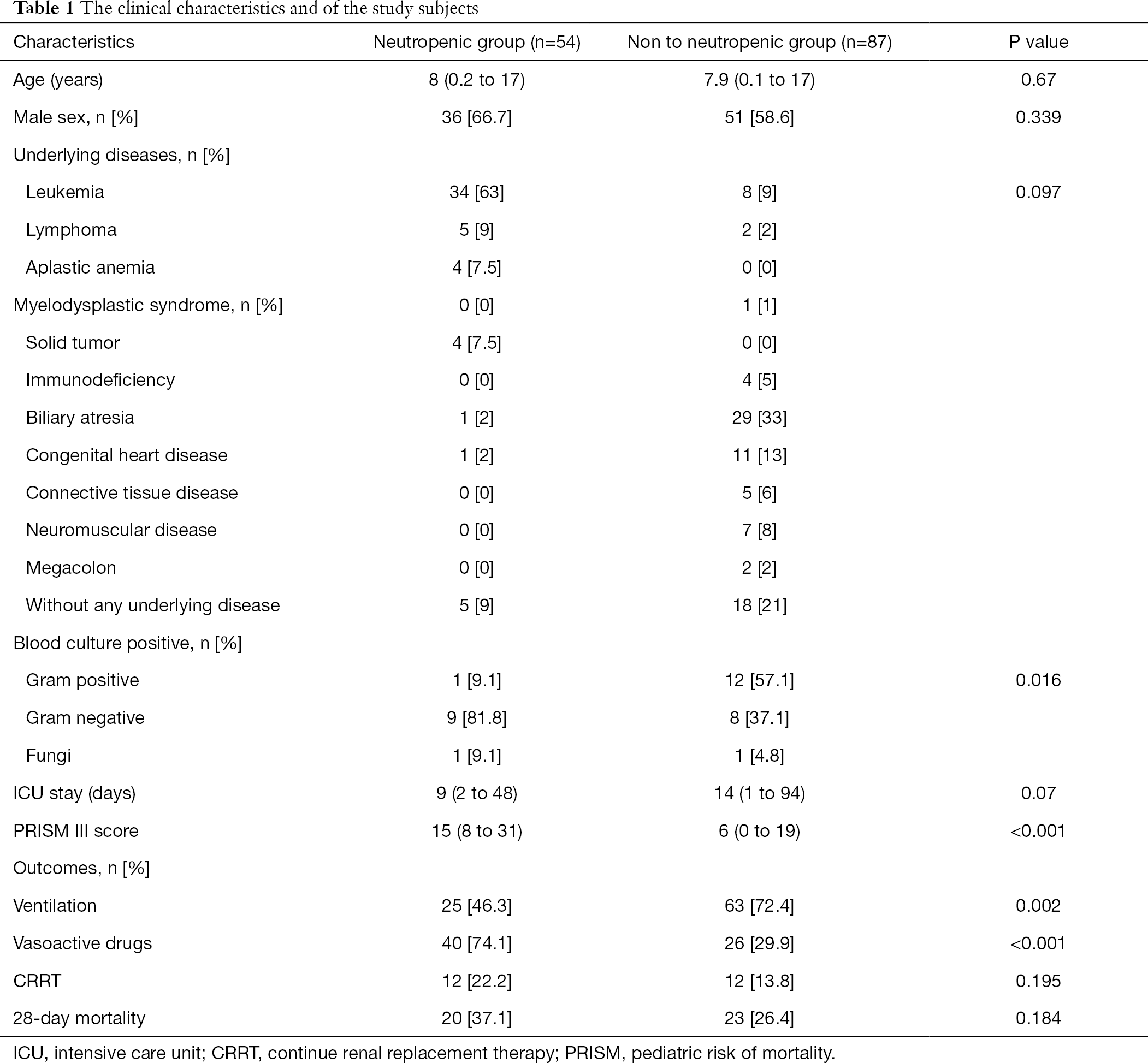 Compared with non-neutropenic subjects, severe neutropenic subjects were more likely to receive vasoactive drugs treatment (74.1% vs. 29.9%, P<0.001) while less likely to receive mechanical ventilation (46.3% vs. 72.4%, P=0.002). 28-day morality and the use of CRRT showed no obvious differences between the two groups (Table 1). Both in adjusted or unadjusted regression models, neutropenia was a risk factor for patients with severe sepsis or septic shock to receive vasoactive drugs [adjusted: 9.796 (3.774, 25.429)]. On the contrary, neutropenia was a protective factor for receiving ventilation [adjusted: 0.157 (0.06, 0.414)]. The risk of 28-day mortality and receiving CRRT within 7 days from PICU admission were not significantly different between the two groups in adjusted or unadjusted regression models (Tables 1,2).

Table 2 Associations of neutropenic severe sepsis/septic shock with the use of ventilation, the use of vasoactive drugs, CRRT procedure and 28-day mortality
Full table

To further evaluate the ability of selected biomarkers in assessing the prognosis of patients with different characteristics, we established a ROC curve. For patients with severe sepsis or septic shock, the areas under the curve (AUC) for IL-6 and IL-10 were 0.613 and 0.633 respectively. When setting cut-off points for IL-6 and IL-10 at 143.255 and 120.26 pg/mL, the sensitivity was 60.5% and 37.2%, with specificity 62.2% and 90.8%, respectively for predicting mortality. For severe sepsis/septic shock patients with severe neutropenia, the AUC for IL-10 were 0.687 and the Cut-off value were 110.685. Accordingly, the sensitivity and specificity were 65% and 79.4% respectively (Table 5).

Severe neutropenia increases the need of vasoactive drugs in severe sepsis/septic shock patient, as severe neutropenia impairs elimination of pathogens and function of defensive barrier, leading to secondary infection and bacterial translocation and circulatory disorders (21). Severe sepsis/septic shock patients complicated with neutropenia have a lower risk of receiving mechanical ventilation after PICU admission than those without neutropenia. This partly due to the different risk of ARDS in the two populations. Evidences have shown an increased expression of neutrophil-related genes in the periphery of patients with sepsis and ARDS (22), which suggests that neutrophils play an important role in the early onset of ARDS. The heterogeneity of ARDS pathogenesis is partly determined by circulating neutrophils. Neutropenia may alleviate lung injury and reduce the need of mechanical ventilation. However, in non-neutropenic ARDS, the mechanism of neutrophil-independent lung injury has been discovered (23). The important role of neutrophils in the pathogenesis of ARDS partly explains its lung protection ability.

CRP and PCT levels are related to the severity of infection and disease (24-26), which are of great value to the differential diagnosis and evaluating prognosis of febrile neutropenia after chemotherapy for hematological malignancies (27-29). In our research, the levels of CRP and PCT significantly increased after sepsis onset which paralleled mortality, and further increased when the patients were combined with neutropenia, suggesting that severe neutropenia may worsen the infection. In this study, IL-6 and IL-10 elevated significantly higher in sepsis patients with severe neutropenia, which is consistent with previous discovery (30,31). Notably, the percentage of Tregs also significantly increased in severe neutropenic septic patients, which partly explained the reason for the increase of IL-10. Diepold et al. thought that IL-6 performed well in predicting severity of bacterial infection and sepsis, with high sensitivity and specificity (90% and 85%), which is consistent with the research of Smok et al. (32,33). We also observed that the IL-6 and IL-10 levels were significantly different between the survival group and the death group, suggesting that high levels of IL-6 and IL-10 are associated with poor prognosis. Subgroup analysis demonstrated that, regardless of the outcome (survival or dead) of septic patients, IL-6 and IL-10 levels of neutropenic septic patients were always significantly higher than those of non-neutropenic septic patients. It indicates that the levels of pro/anti-inflammatory factors will increase with the onset of neutropenia, and the reason may be that neutropenia could weaken the body’s response to inflammatory factors (34).

Kitanovski et al. showed that the concentrations of PCT and IL-6 were the best predictor of the severity of sepsis. In severe sepsis, at a sensitivity level of 100%, the best specificity on day 1 was seen for IL-6 (specificity 57%) at a cutoff value of 41.8 mg/L and on day 2 for PCT (specificity 93.2%) at a cutoff value of 5.1 µg/L (35). Notably, we found that IL-6 and IL-10 could help identify the risk of death in patients with severe sepsis/septic shock. For patients with severe neutropenia and severe sepsis/septic shock, only IL-10 showed a certain predictive value. In our study, apart from IL-6 and IL-10, other cytokines failed to show well diagnostic and predictive value, partly due to the limitation of patient type and small sample size.

Therefore, severe neutropenia is associated with biomarker features and clinical outcomes of patients with severe sepsis/septic shock. Some cytokines could help predict the prognosis of septic children with neutropenia, and help guide evidence-based integrated treatment. However, underlying diseases may affect cytokine levels. The pathophysiology and immune response of the patients with hematological malignancy included in this study are different from those of patients with non-hematological diseases. Cytokine status of diseases such as tumors is not clear yet, which interferes with clinical judgment. In addition, our research also has many deficiencies, including its retrospective nature, low efficiency, single-center experience, and small sample size. Thus, the results of this retrospective cohort study should be interpreted with caution.

The authors would also like to thank all other physicians in the pediatric intensive care unit division in the Shanghai Children’s Medical Center for their support.

Funding: This study was supported by grants from the three-year action plan of promoting clinical skills and innovation ability of municipal hospitals, clinical five new transformation project for special disease of Shanghai Shenkang Hospital Development Center (grant No. 16CR3085B), and the Shanghai Natural Science Foundation of China (grant No. 19ZR1432900).

Reporting Checklist: The authors have completed the STROBE reporting checklist. Available at http://dx.doi.org/10.21037/tp-20-230

Conflicts of Interest: All authors have completed the ICMJE uniform disclosure form (available at http://dx.doi.org/10.21037/tp-20-230). The authors have no conflicts of interest to declare.

Ethical Statement: The authors are accountable for all aspects of the work in ensuring that questions related to the accuracy or integrity of any part of the work are appropriately investigated and resolved. The study was performed in accordance with the Declaration of Helsinki (2013 revision) and was approved by the Research Ethics Committee of the Shanghai Children’s Medical Center of Shanghai Jiao Tong University (Ethical code: SCMCIRBW2020049). Individual consent for this retrospective analysis was waived.