We present the following article in accordance with the TRIPOD reporting checklist (available at http://dx.doi.org/10.21037tp-20-184).

Neonates who were admitted to the Department of Neonatology of CHOF between 11/1/2016 and 12/31/2018 were included as the control group, excluding neonates who were rehospitalized in either the neonatal inpatient ward or other pediatric inpatient wards within 31 days after discharge, neonates with more than one inpatient event, and those who died before discharge. Random coding was applied for the selection of the control group. The number of neonates chosen as the control group for the model construction dataset was 1.5 times the number of neonates with unplanned rehospitalizations, and 150 neonates were randomly selected for the validation dataset. A flow chart of the subjects is represented in Figure 1.

The adequacy of the sample size (n) for the development of the predictive model was ensured by employing the required sample size equation (Equation 1). Overfitting was minimized with the combination of the predictor parameters (P), the coefficient of determination and the Van Houwelingen shrinkage factor (SVH). The coefficient of determination was set as 0.1, while the SVH was set as 0.9.

Continuous variables are expressed as the means (SDs) and were compared using an unpaired, 2-tailed t-test or the Mann-Whitney test. Categorical variables were compared using the χ2 test. P<0.05 was considered statistically significant for the analyses. The significance of each variable in the model construction dataset was assessed with a binominal regression model. Univariate regression analysis was used to evaluate the predictive accuracy of each variable in the prediction model.

A nomogram was formulated for use in clinical practice based on the results of binominal regression with R version 3.5.2. Each regression coefficient in binominal logistic regression was converted proportionally to a 0- to 100-point scale. The effect of the variable with the highest β coefficient (absolute value) is assigned 100 points. The points are added across independent variables to derive the total points, which are converted to the predicted probability. The predictive performance of the nomogram was measured by the concordance index (C-index) and calibration with bootstrap samples was performed to decrease the overfit bias. Receiver operating characteristic (ROC) curve analysis was used to calculate the optimal cutoff values that maximized the Youden index.

To validate the model derived from the model construction dataset, we applied the scoring method to the validation dataset (N=311). C-statistics were used for validation.

The study involving human participants were reviewed and approved by the Ethical Committee of Children’s Hospital, Fudan University [No. (2018)213]. Informed consents for participation were obtained from parents or legal guardians of the patients in this study. The study was conducted in accordance with the Declaration of Helsinki (as revised in 2013). 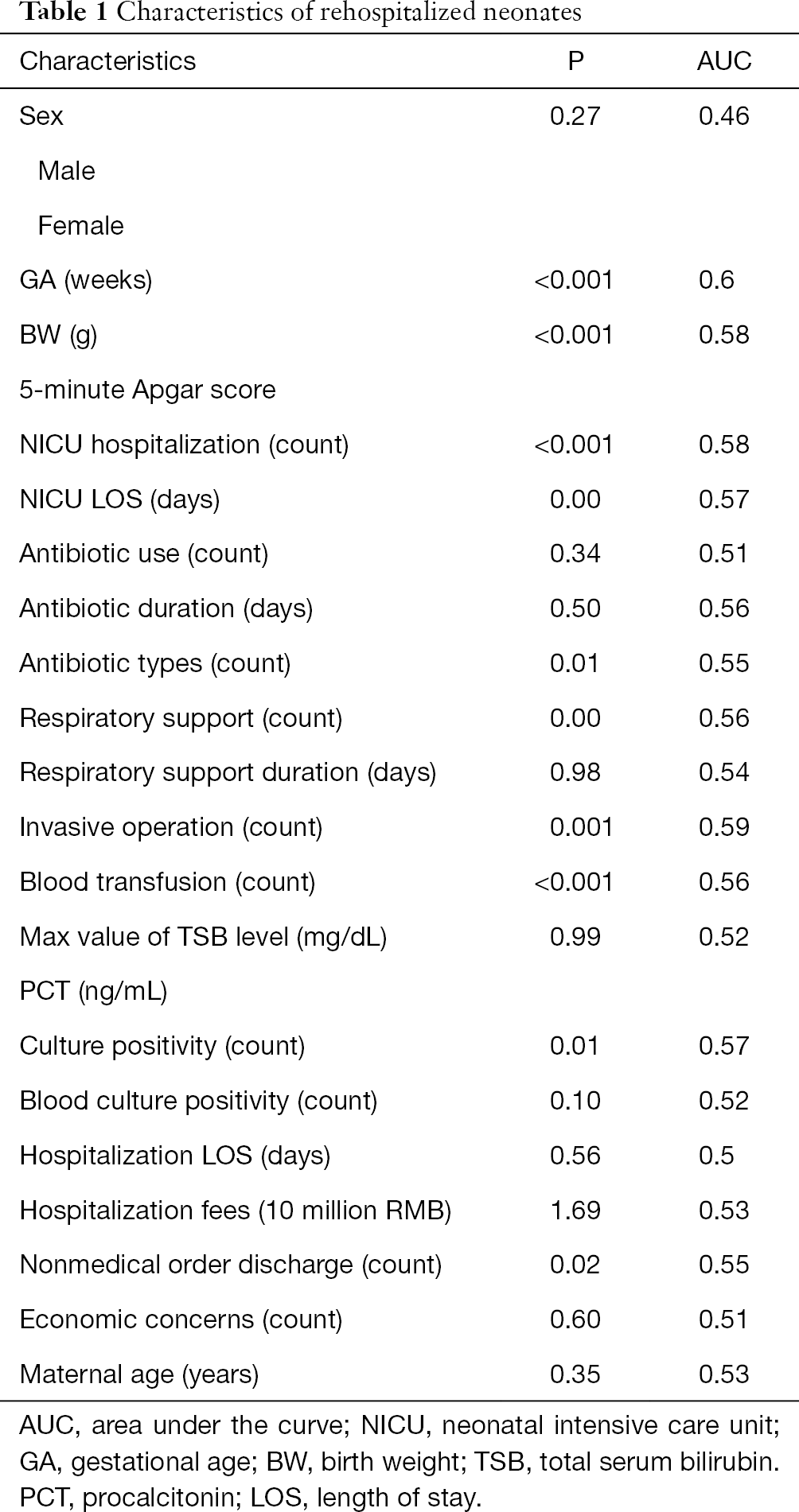 The nomogram and its predictive performance

Univariate logistic analysis of risk factors for infant rehospitalization identified 17 variables with AUCs >0.52 (Table 2). PCT and the 5-minute Apgar score were excluded due to missing data. Four risk factors were selected in the variable selection process, and risk factors associated with neonate unplanned rehospitalization according to the binominal regression model are shown in Table 3. Strong associations were observed for GA (OR: 0.99; 95% CI: 0.98–1.00), NICU LOS (OR: 1.02; 95% CI: 1.01–1.04), nonmedical order discharge (OR: 2.22; 95% CI: 1.34–3.68) and maternal age (OR: 0.96; 95% CI: 0.92–1.00). These strongly associated risk factors were used to generate the prediction model for neonate unplanned rehospitalization. 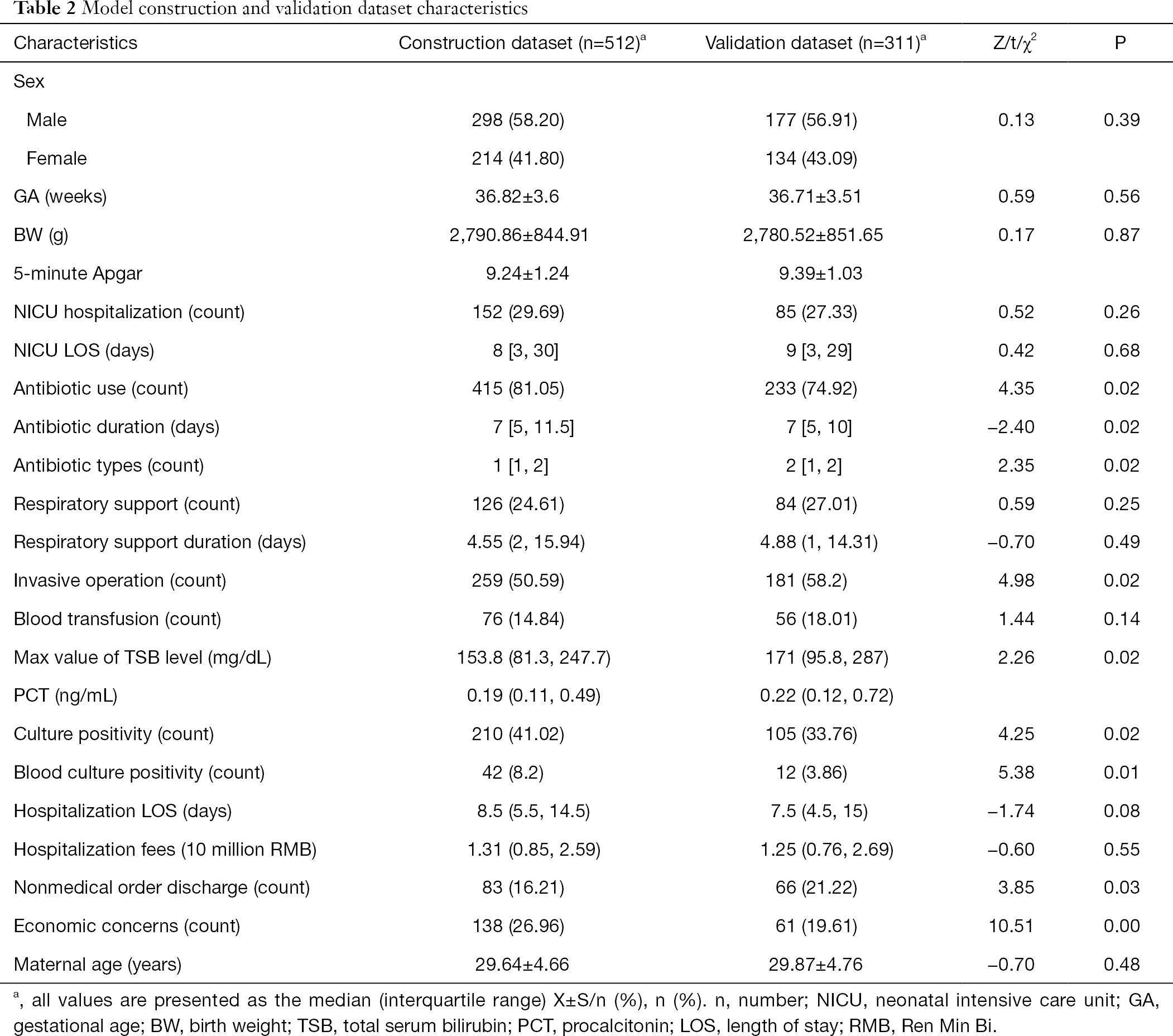 The regression coefficients (β) from the binominal logistic model were used to construct the prediction model for neonate unplanned rehospitalization. The scoring system was as follows: Log [P/1-P] = 3.7535- 0.0132* (GA) + 0.0225* (NICU LOS) + 0.7976* (nonmedical order discharge) - 0.0132* (maternal age). The performance of the nomogram was measured by ROC curve analysis, and the AUC was 0.68 in the model construction dataset. A nomogram was generated to summarize the results of the scoring system for clinical use (Figure 2). 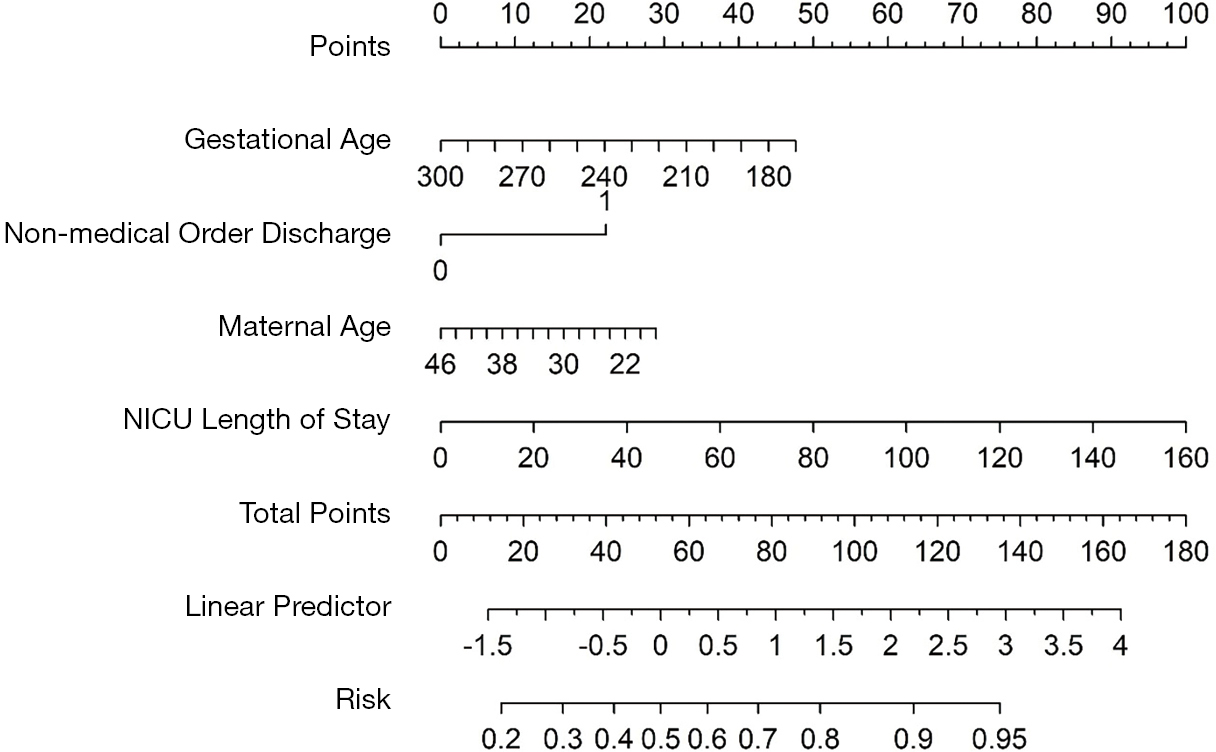 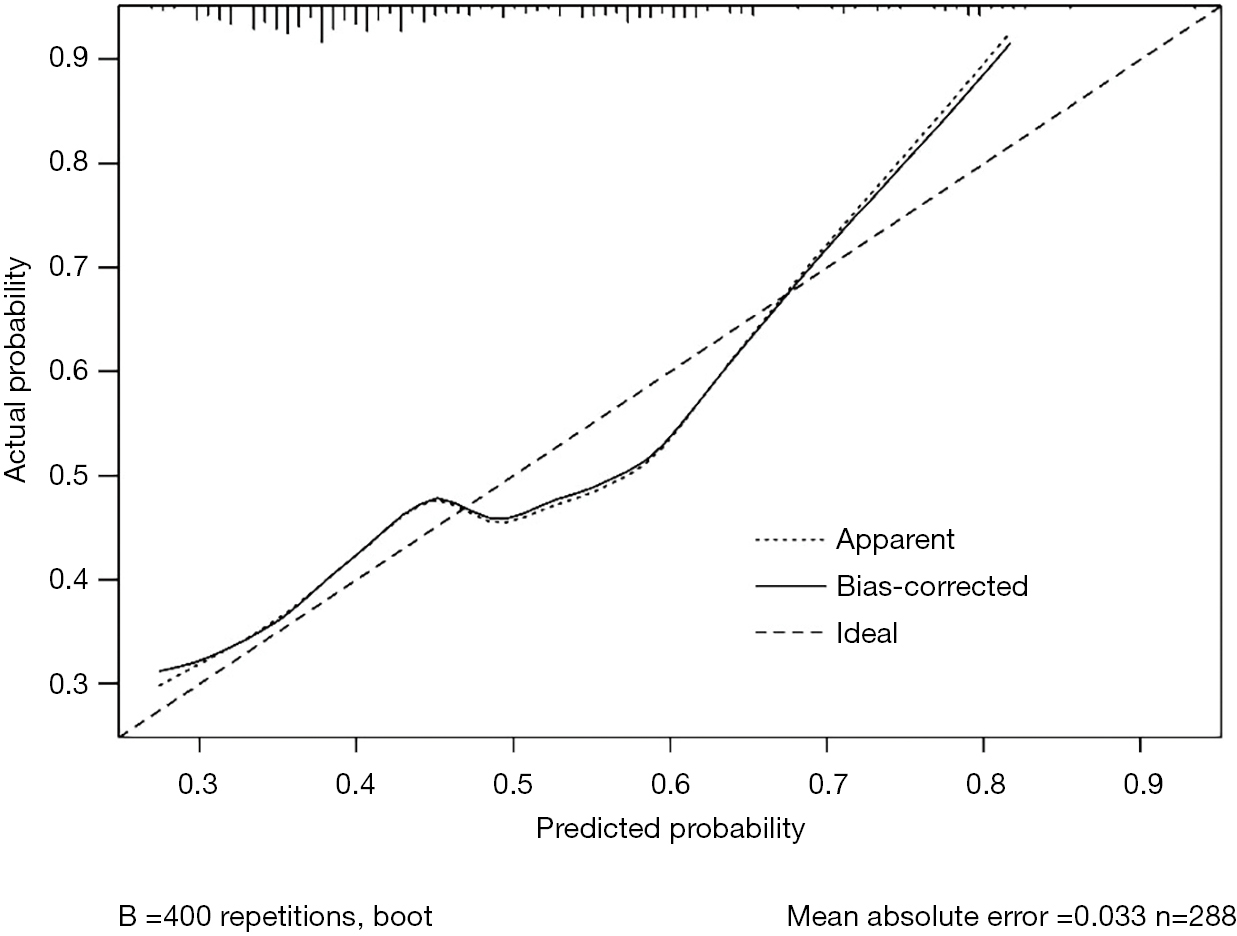 In this study, a prognostic model for neonate rehospitalization was created by combining neonatal clinical data and demographic data based on 6,526 hospital admission hospital events. External validation was performed based on 4,590 admission events. The overall unplanned rehospitalization rate for neonates was 3.27%. Analysis of 21 risk factors, including 15 clinical factors and 6 demographic factors, produced a simple model that included 4 risk factors. Based on the results, lower GA, a longer NICU LOS, nonmedical order discharge, and a lower maternal age were confirmed to be strong risk factors for neonate unplanned rehospitalizations. The nomogram derived from the prediction model can be used by clinicians on paper or as an online risk calculator.

Previous studies indicated that GA, BW, sex, race, LOS, diagnosis, Apgar score, maternal age, etc. were risk factors for neonate rehospitalization, but the studies were mostly based on maternity hospitals with neonates who were relatively healthy (4,23). Few studies have constructed prediction models based on neonates in the NICU (4,24). One study constructed a model for infants that incorporated 7 binary factors (Apgar score, BW, congenital abnormalities, maternal age, maternal smoking during pregnancy, maternal substance and alcohol use during pregnancy, and previous pregnancy) that predict infant mortality (25). However, risk factors for rehospitalization differ slightly from risk factors for mortality in neonates and there has been no research established a prediction model for neonate unplanned rehospitalization. Our present study focused on disease-based neonate rehospitalization in a specialized hospital and incorporated 4 comprehensive and easily available predischarge variables. The model performed well, with an AUC of 0.68 and a C-index value of 0.65 in the training and validation datasets.

This prognostic model has clinical relevance for neonatologists, enabling them to better identify neonates who are at high risk of rehospitalization. According to our neonate rehospitalization prediction model, 61.1% of the outcomes for discharged neonates could be predicted well (including both safe discharge and rehospitalization). The outcomes of 19.3% of the discharged neonates might be predicted incorrectly (predicted to have a safe discharge but eventually readmitted), putting the discharged infants at risk for health-related uncertainties. Therefore, follow-up for high-risk neonates could be achieved by short-term outpatient visits or maternal education with regard to adequate postnatal care and follow-up should be enhanced for neonates with total scores greater than 39 points.

The study has several limitations. First, the datasets did not include information about rehospitalization in a different hospital nor the data from the hospital previously attended, which likely led to an underestimation of rehospitalization. Second, the patients were all consisted of the Han nationality and the data were collected from a single city, thus the application of the model in different races and regions should be assessed. Third, prospective studies are needed to further confirm the reliability of the nomogram.

By including 4 main risk factors for neonate rehospitalization, a nomogram for neonatal clinicians was generated. The model is a good predictor of neonate unplanned rehospitalization, and it performed well after validation. A total score that greater than 39 indicated the need for further follow-up.

We want to express out most sincere gratitude to all the infants who participated in our study as well as their parents and guardians for their commitment to the project.

Reporting Checklist: The authors have completed the TRIPOD reporting checklist. Available at http://dx.doi.org/10.21037/tp-20-184

Conflicts of Interest: All authors have completed the ICMJE uniform disclosure form (available at http://dx.doi.org/10.21037/tp-20-184). The authors have no conflicts of interest to declare.

Ethical Statement: The authors are accountable for all aspects of the work in ensuring that questions related to the accuracy or integrity of any part of the work are appropriately investigated and resolved. The study was conducted in accordance with the Declaration of Helsinki (as revised in 2013). The study involving human participants were reviewed and approved by the Ethical Committee of Children’s Hospital, Fudan University board [No. (2018)213]. Informed consents for participation were obtained from parents or legal guardians of the patients in this study.