Domperidone is a antidopaminergic agent that facilitates gastric emptying (5), and is now widely used for nausea and vomiting (6). The role of antidopaminergic agents in patients receiving VCE has been controversial according to the European Society of Gastrointestinal Endoscopy technical review (7). However, there is no clinical evidence to support the use of prokinetics to improve completion rate or SBTT according to the NASPGHAN capsule endoscopy clinical report (1). Recent joint recommendations of the North American society for pediatric gastroenterology, hepatology and nutrition, as well as that of the European society for pediatric gastroenterology, hepatology and nutrition did not suggest using domperidone in pediatric gastroesophageal reflux (5).

Several studies evaluated the effect laxatives, prokinetics, and/or simethicone to improve diagnostic yield, visualization, and completion rate (8,9). However, the results remain conflicting. The routine use of prokinetics before performing VCE was not recommended by the North American Society for Pediatric Gastroenterology, Hepatology and Nutrition (1).

Domperidone is an anti-dopaminergic agent free of extrapyramidal adverse effects, due to its lack of ability to cross the blood-brain barrier (10). A retrospective study showed that domperidone significantly increases completion rate of VCE in adults (10). The effect of domperidone used pre-VCE has not been evaluated in randomized controlled trials among pediatric patients. Thus, the aim of this study was to examine the impact of domperidone on GTT, SBTT and CER in in children and adolescents undergoing VCE.

This study was conducted as a single-center, parallel, randomized controlled trial in an university hospital for children between 1st, November 2017 and 1st, November 2018. Approval for this study was obtained from the Ethical Committee of Children’s Hospital, Fudan University (approval number: 2018[54]). Signed informed consent was obtained from the parents of the patients. The study conformed to the provisions of the Declaration of Helsinki (as revised in 2013). This study was retrospectively registered on 7 September 2018 on ClinicalTrials.gov (NCT03662113). Pediatric patients older than 3 years undergoing VCE were eligible for recruitment. Indications for VCE included anemia, obscure gastrointestinal bleeding, Crohn’s disease and recurrent abdominal pain of unclear etiology. Patients were excluded on the following criteria: age less than 3 years, whom with history of partial or intermittent small bowel obstruction, and esophageal stricture. Patients were randomized without restriction via concealed allocation to the two groups by a computer-generated random sequence generator prior to the procedure by a nurse assistant. The study investigators were blinded to the randomization.

VCEs were performed using a OMOM capsule CE-2012 (Jinshan Science & Technology, Chongqing, China). Written informed consents were obtained from parents or guardians of all patients before procedure. Participants were randomly assigned to domperidone group and the control group. Both groups were given a clear liquid diet one day prior to VCE and were fast after midnight. The domperidone group received domperidone directly before VCE. Should the capsule remain in the stomach 2.5 hours post ingestion, a gastroscopy would be performed to deliver it into the duodenum. Any participant requiring gastroscopy-assisted delivery of the capsule into the duodenum had their GTT time excluded in the study. The allocation ratio was set as 1:1.

Demographic information, including sex and age, indications for VCE and medical history of the participants were recorded.

Results of VCEs were reviewed by a nurse specialist and a consultant pediatric gastroenterologist. They were both blinded to participant status. The time of the first gastric image, first duodenal image and first cecal image were recorded in minutes. GTT was defined as time of first duodenal image minus the time of the first gastric image. SBTT was defined as time of first cecal image minus the first duodenal image. Primary outcomes included GTT and SBTT. Complete examination was defined by presence of cecum image at the completion of the recording, which was defined as secondary outcome. Outcomes were analyzed to evaluate whether domperidone can decrease GTT and SBTT, and improve CER. The safety outcomes were the adverse effect in the domperidone group.

There were 125/200 (62.5%) males among all participants. Between 1st, November 2017 and 1st, November 2018, we included 100 subjects in the domperidone group and 100 subjects in the control group, respectively. The average age was 10.1±3.4 years in the domperidone group and 10.7±3.6 years in the control group, respectively (P=0.21). There was no statistically significant difference in age and sex between two groups.

The most common indications for VCE was investigations for gastrointestinal bleeding, recurrent abdominal pain, and inflammatory bowel disease. Detailed indications are listed in Table 1. 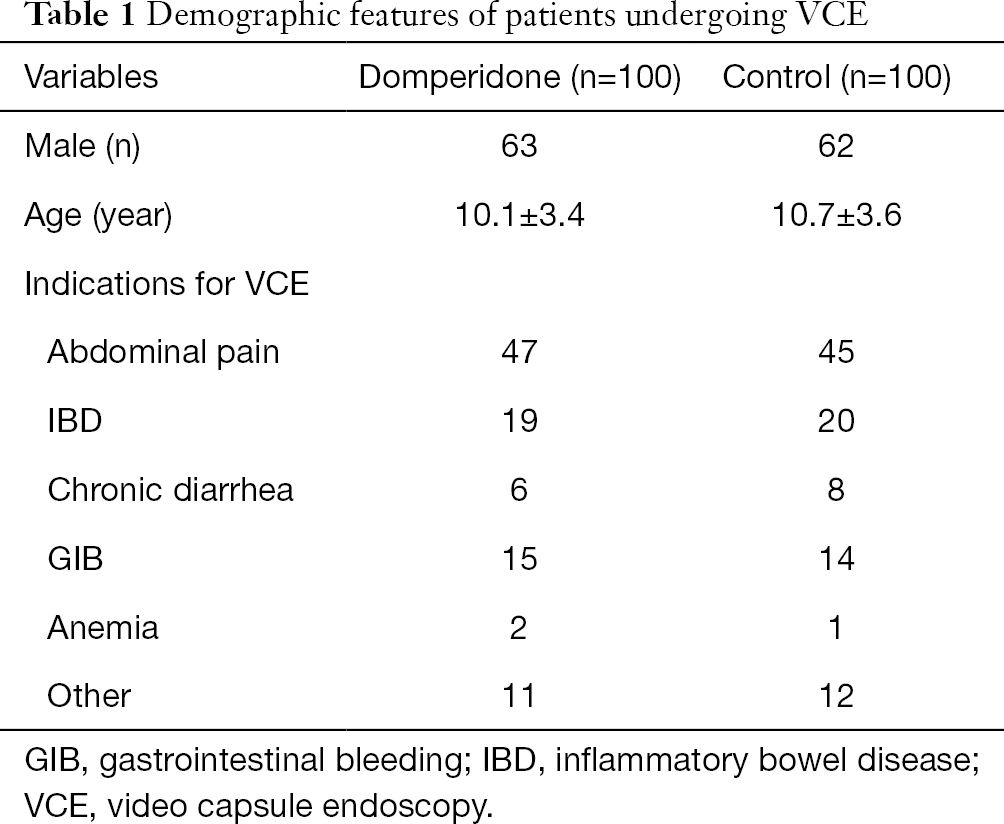 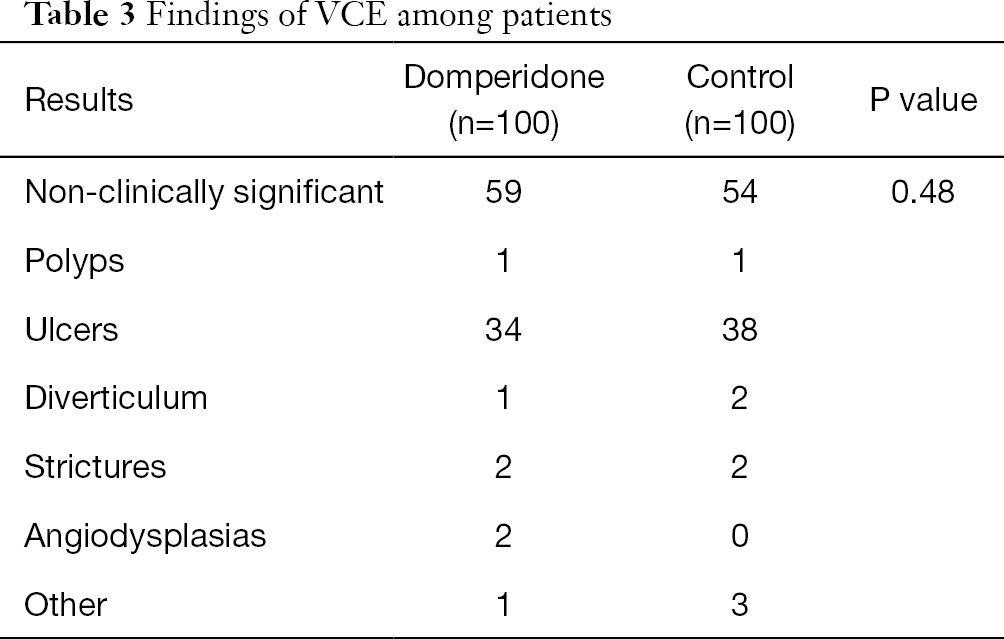 To our knowledge, this is the first randomized controlled trial evaluating the effect of domperidone on VCE transit time among children. In our study, domperidone reduced GTT and SBTT of VCE. However, this effect was not significant. Domperidone did not improve complete examination rate of children receiving VCE. The effect of domperidone could not be proven, possibly due to sample size. Another retrospective study showed that higher CR was achieved when domperidone was used with certain kind of VCE (PillCamSB; Given Imaging Ltd.) (10). Therefore, we suspect that the effect of domperidone might be affected by the size, weight and center of gravity of VCE models.

A meta-analysis indicated that prokinetics including erythromycin and metoclopramide can improve completion rate in VCE (11). A recent retrospective study showed that domperidone prolonged oral to duodenal transit time in adults receiving VCE (4). However, the methodologies and study populations were different from our study. Other prokinetics have also been studied. In a randomized, prospective and controlled study, mosapride citrate was shown to reduce GTT and improve complete examination rate in adults (12). Erythromycin has also been tested, among which conflicting results were shown. Several studies showed that oral erythromycin significantly reduced GTT (13-15), while another study revealed that erythromycin failed to increase CER (16).

Due to safety concerns, domperidone is currently not available in the United States, while it remains widely used for nausea and vomiting both in Europe and China (4,17,18). There are very few published studies of prokinetic effects of domperidone in children. Nevertheless, a very recent randomized and controlled study showed that domperidone may be a safe and effective therapeutic for remission of symptoms in children with abdominal pain predominant functional gastrointestinal disorders (19). Domperidone has also been used for patients with gastroparesis (20,21), and have proved to improve success rate of enteral nutrition in the intensive care unit (18,22).

There are certain limitations when interpreting this study. This was a single-center study. Patients were enrolled for VCE due to various real-world indications. However, our protocol was reflective of real-life clinical practice. Also, patients were not standardized to age (23).

We express our gratitude to all the patients and families who participated in the study. We would like to acknowledge Dr. Mushuang Hu for the help in editing the manuscript.

Reporting Checklist: The authors have completed the CONSORT reporting checklist. Available at http://dx.doi.org/10.21037/tp-20-273

Conflicts of Interest: All authors have completed the ICMJE uniform disclosure form (available at http://dx.doi.org/10.21037/tp-20-273). The authors have no conflicts of interest to declare.

Ethics Statement: The authors are accountable for all aspects of the work in ensuring that questions related to the accuracy or integrity of any part of the work are appropriately investigated and resolved. Signed informed consent was obtained from the parents of the patients. Ethical approval was obtained from the Ethical Committee of Children’s Hospital of Fudan University {approval number: 2018[54]}. The study conformed to the provisions of the Declaration of Helsinki (as revised in 2013).